The Secret History of Reese’s Pieces with Peanuts!

Reese’s Pieces have been around since the late 1970’s, and over the years the brand has received limited run extensions in the form of Reese’s Pieces with the addition of Peanuts.  They did so just last year, but I was surprised to learn that the history of this brand extension goes back much further than I’d originally guessed.  Make the jump to find out just how far!

I was excited when Reese’s announced that they’d be bringing back Reese’s Pieces with Peanuts in the Spring of 2016 as I fondly recalled the first time that I’d encountered them just over a decade before.

I had long believed that the early 2000’s release of Reese’s Pieces with Peanuts was the first such extension for the Reese’s Pieces brand.  They initially came out as a limited edition in 2004: 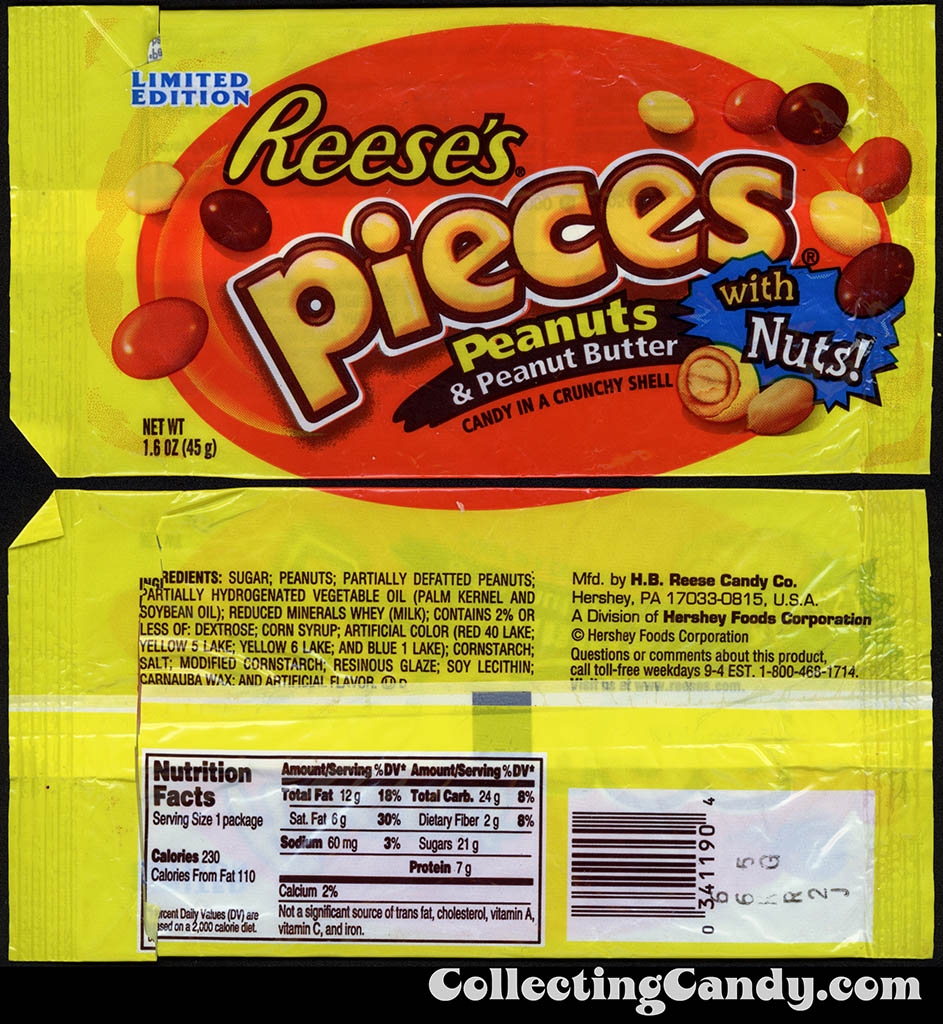 The limited edition release must have been a hit because they were soon appearing on-shelves without the limited indication.  To the best of my knowledge, Reese’s Pieces with Peanuts were around for at least a couple more years, as you can see by these two packages from 2005 and 2006 respectively: 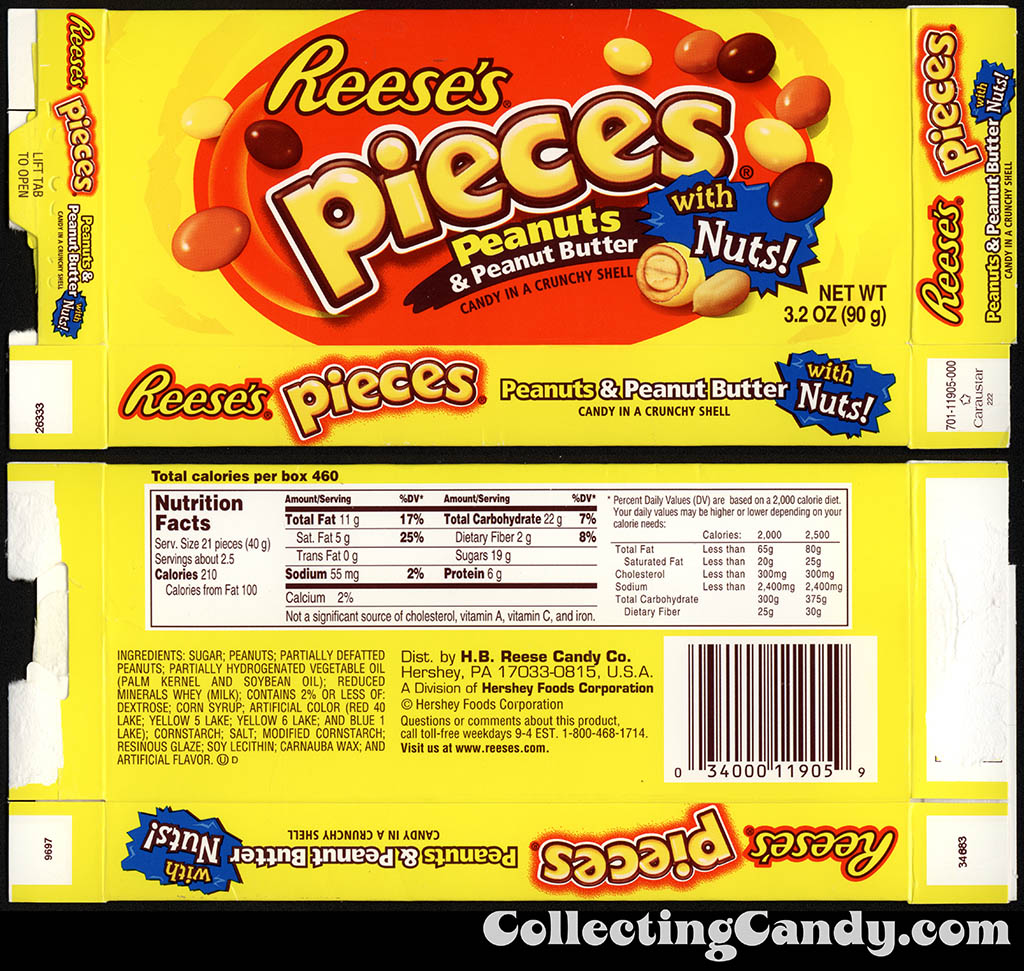 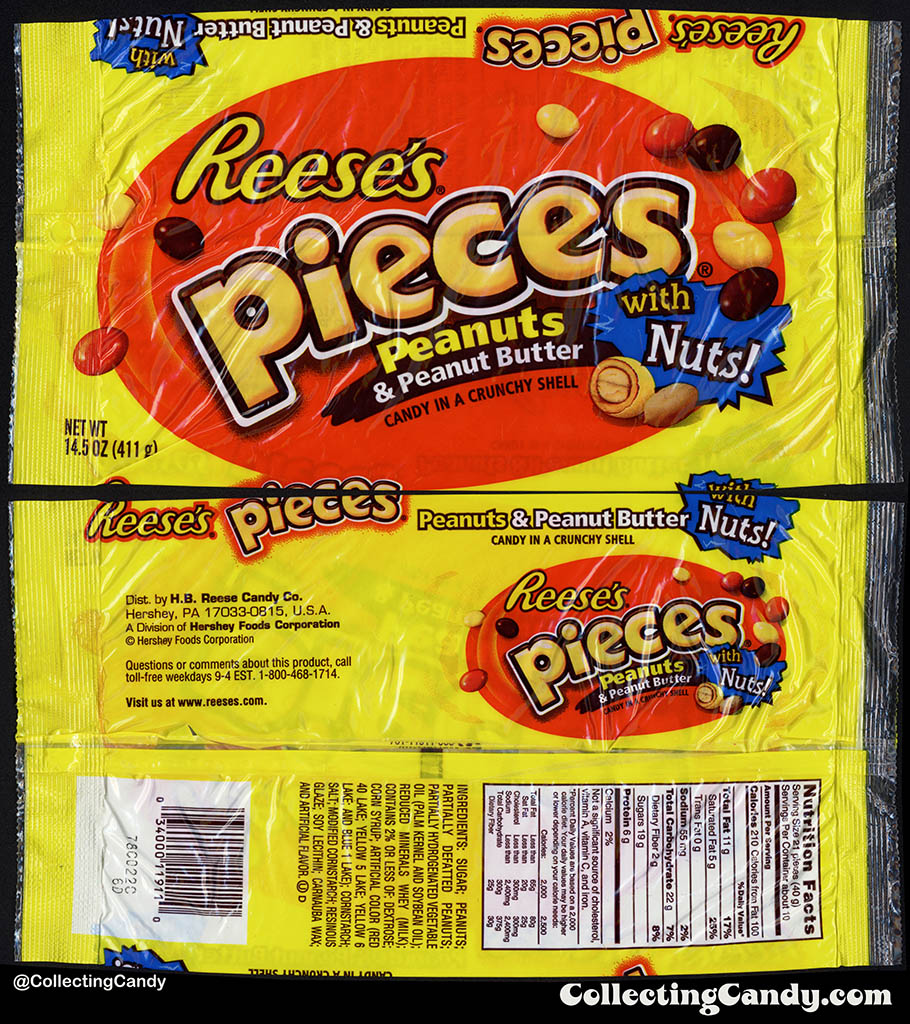 So, when the 2016 release appeared, it was a welcome relaunch of that early 2000’s brand extension: 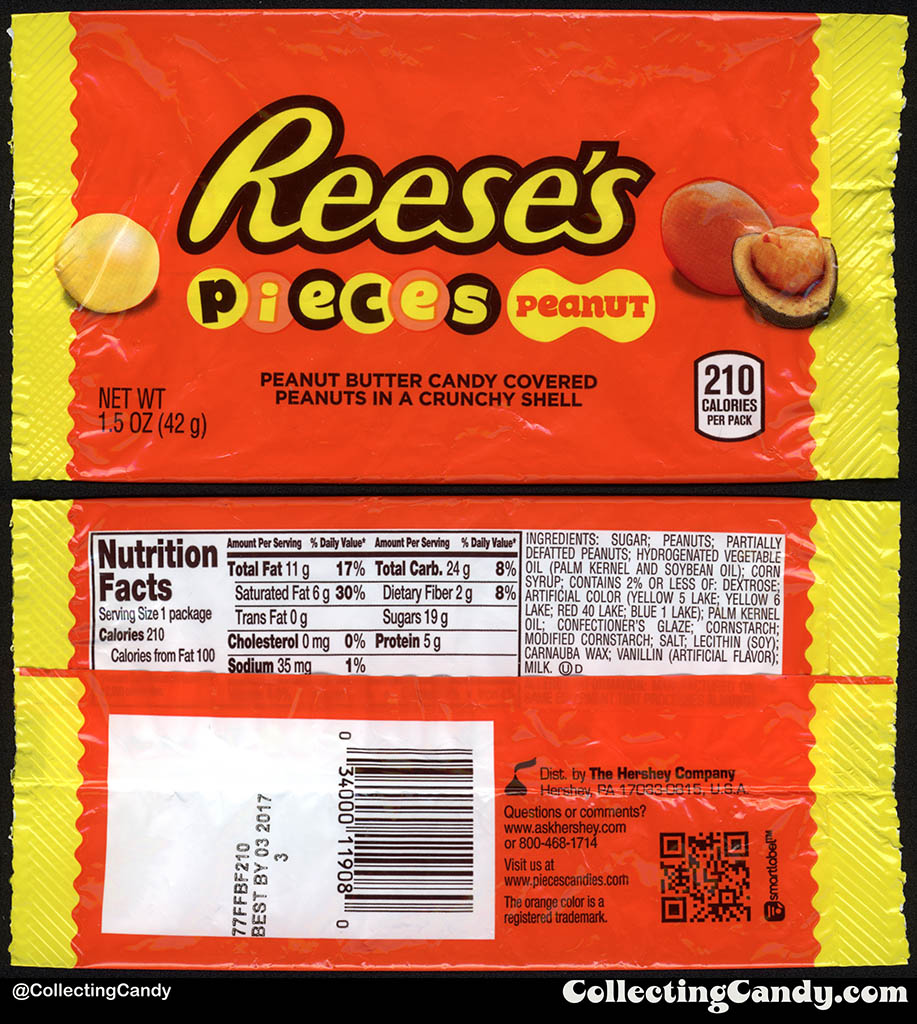 I picked up quite a few of those new Reese’s Pieces with Peanuts packs last year, as I seemed to always find them on-sale at Walgreens whenever I popped in.   They would also end up releasing a double-size King Size package: 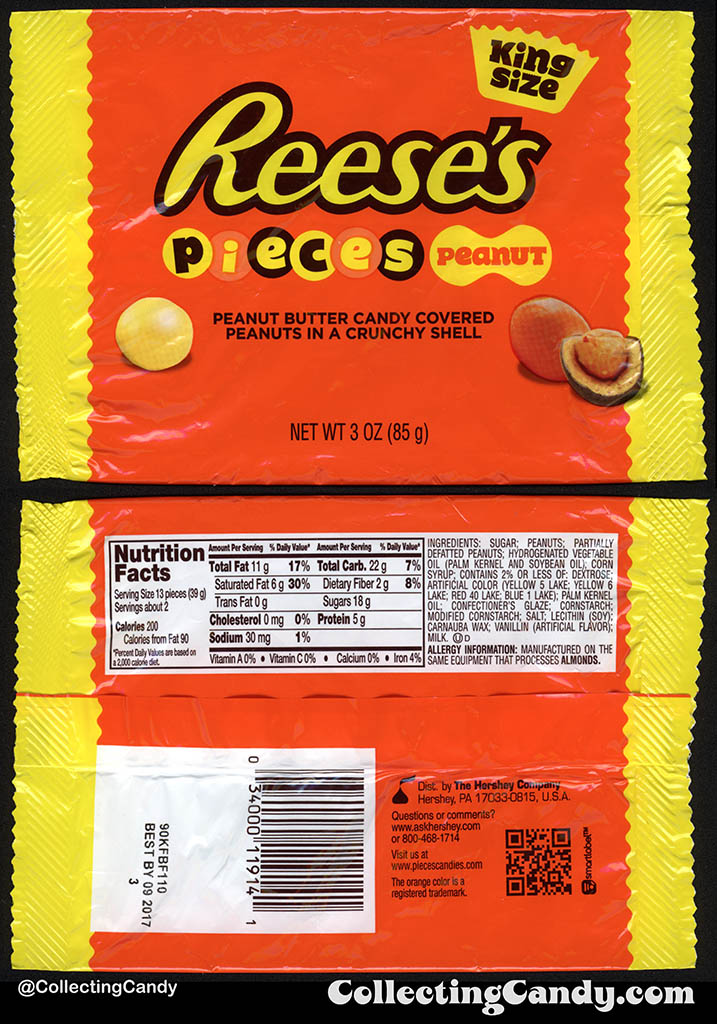 It was a thrilling discovery as I’d never found a reference to this earlier incarnation anywhere, and I’d certainly never seen a package for one.  So here it is; the ACTUAL original release of Reese’s Pieces with Peanuts from all the way back in 1983 – this is one you won’t find anywhere else but here on CollectingCandy.com: 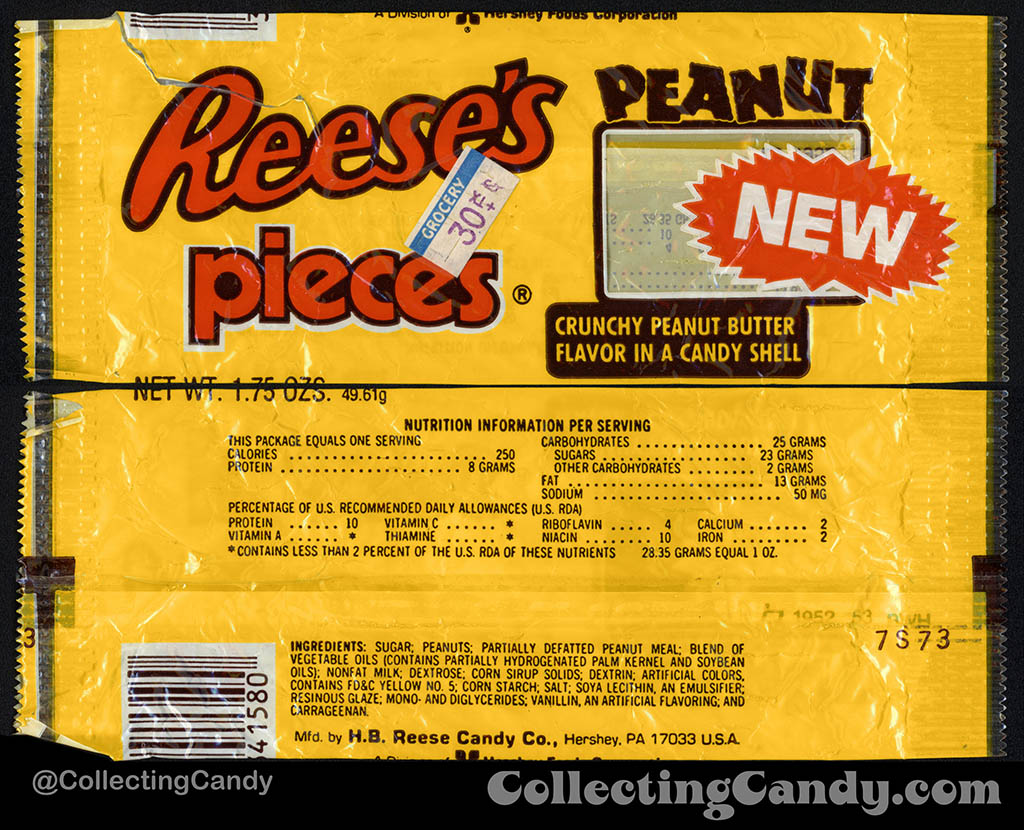 I think that package is amazing and it features a design and layout that pretty much followed the standard Reese’s Pieces pack from the time: 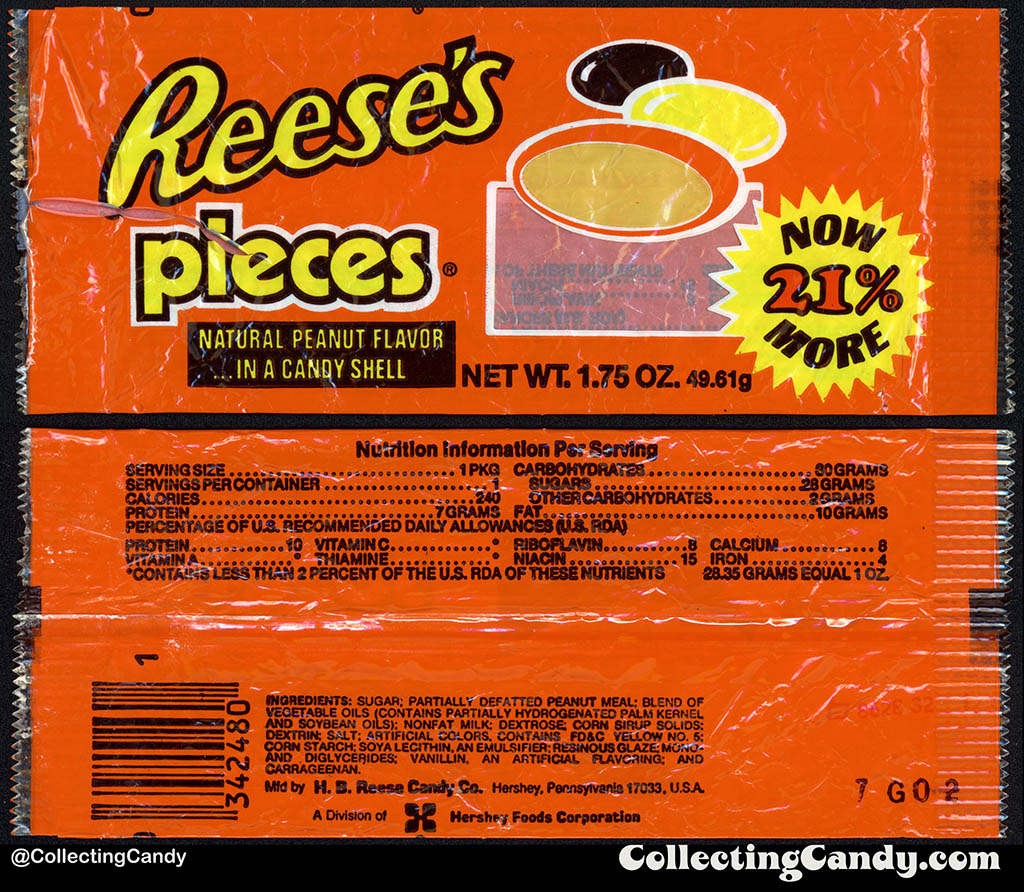 Here’s a newspaper ad from November of 1983, out of Binghamton, New York: 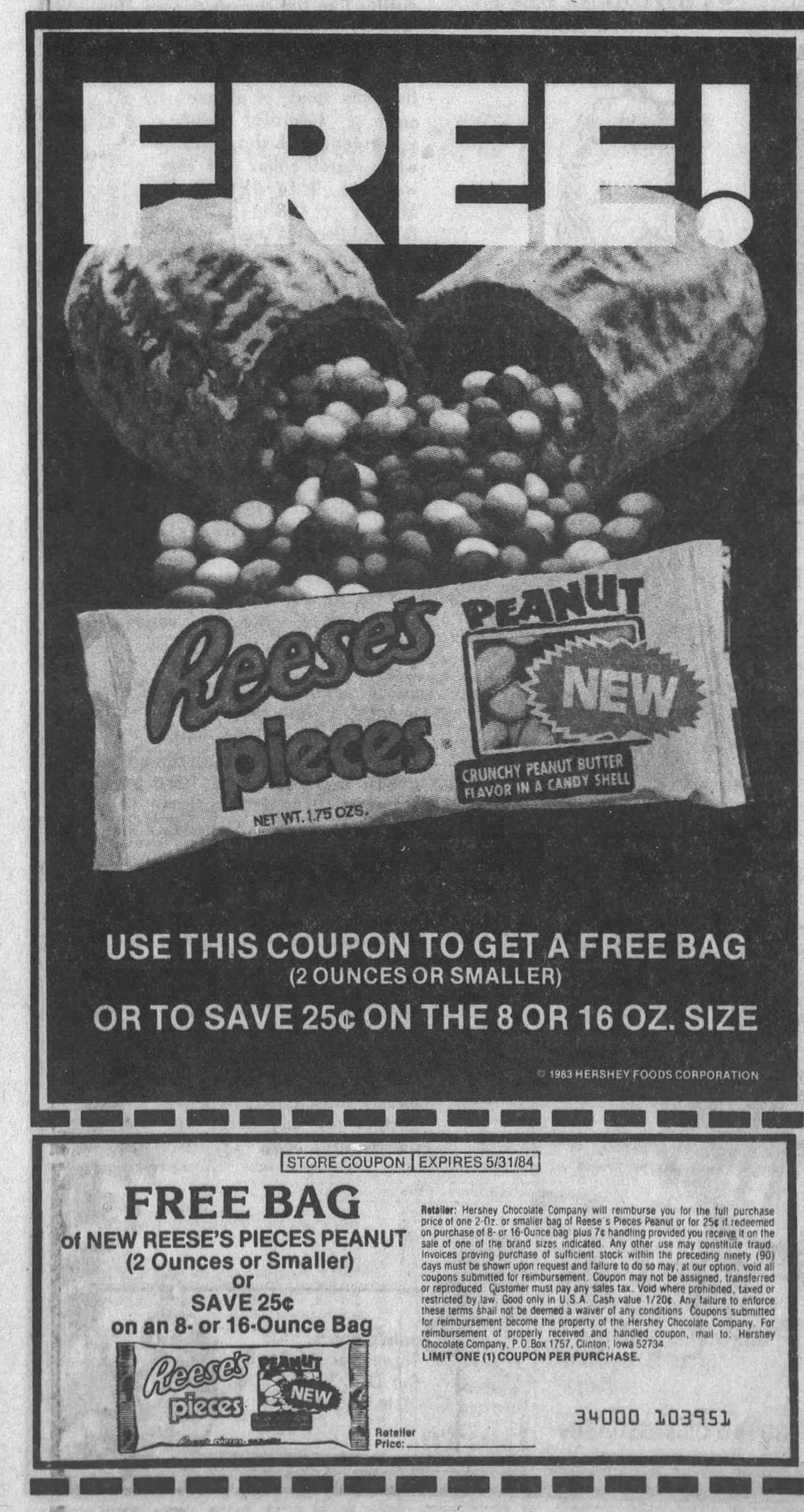 So that discovery reveals a far deeper history for the Reese’s Pieces Peanut brand extension than I’d ever considered previously, providing me with solid evidence of three different eras for the product:

Of course, now I wonder if the 1990’s received its own release for Reese’s Pieces Peanut as well.  Though I’ve never seen a scrap of evidence to support that idea, the discovery of the early 80’s package tells me that you can never say never where this material is concerned.  Maybe 2017 will be the year I find out even more.

And that’s everything I’ve got on the secret history Reese’s Pieces Peanut!  Thanks for checking it out and for joining us for a week-long lead-in to CollectingCandy.com’s 5th Anniversary coming on February 6th.  See you next time!

P.S. For a little more historical coverage of Reese’s Pieces, check out my 2012 post marking the 30th Anniversary of E.T. The Extra Terrestrial!  And also this one on the 1970’s Wacky Packages parody sticker “Pieces”.

A New York City based writer, editor and sometimes actor. After spending much of the 1990′s in the comic book business helping tell the stories of Marvel Comics’ X-Men as series editor, he has since split his time between developing his own entertainment properties while still consulting and working on others. Having been described as “the Indiana Jones of lost and forgotten candy”, Jason is one of the country’s premier candy collectors and historians with his discoveries appearing in countless blogs, magazines, newspaper articles, and books. Always happy to share his knowledge and unique perspectives on this colorful part of our popular culture, Jason has consulted with New York’s Museum of Food and Drink and has also been a featured guest on Food Network’s Heavyweights, France’s M6 Capital, and New York’s TheActionRoom.com. My Google Profile+
View all posts by Jason Liebig →
This entry was posted in 1980's, Chocolate, Hershey, Peanut Butter, Reese's and tagged 1980's, 80's, 80's candy, brand extension, candy collecting, candy collection, candy collector, candy wrapper collection, candy wrapper collector, collectible, collecting candy, confectionery, confections, nuts, packaging, packaging design, peanut, Reese's, sweets, vintage candy wrappers, wrapper. Bookmark the permalink.

5 Responses to The Secret History of Reese’s Pieces with Peanuts!