Way back in 1982, the Hershey company held a Summer promotion where they upped the size of each of their standard bars and alerted consumers to it with a bright on-pack call-out.  I call it the “Hershey’s Now Larger” promotion and you can check it out after the break.

Today is the first installment of a new feature for CollectingCandy.com called “Full Set Fridays”.  The plan with Full Set Fridays is to showcase, for lack of a better term, full sets of wrappers or packages.

The thing about candy packaging is that, excepting in specific instances there aren’t really proper “sets”.  But as I endeavored to do early on here when I covered Hershey’s modern King Size wrappers and Mars’ 2-To-Go, it can be fun to collect and build sets of wrappers even if they don’t lend themselves to it.  So in spite of the difficulty in doing so, where shared promotions and other thematic similarities are concerned, sets can reasonably be described and collected.   That is certainly the case with today’s “Now Larger” set, so let’s get to it.

It was the Summer of 1982, smack dab in the middle of America’s early 1980’s recession as well as a time that followed years of price increases throughout the inflationary 1970’s.  Hershey chose to offer consumers more value for their dollar with a promotion where each standard-size offering would be some percentage larger than it had been.  They alerted consumers to this with a newspaper circular ad and coupon: 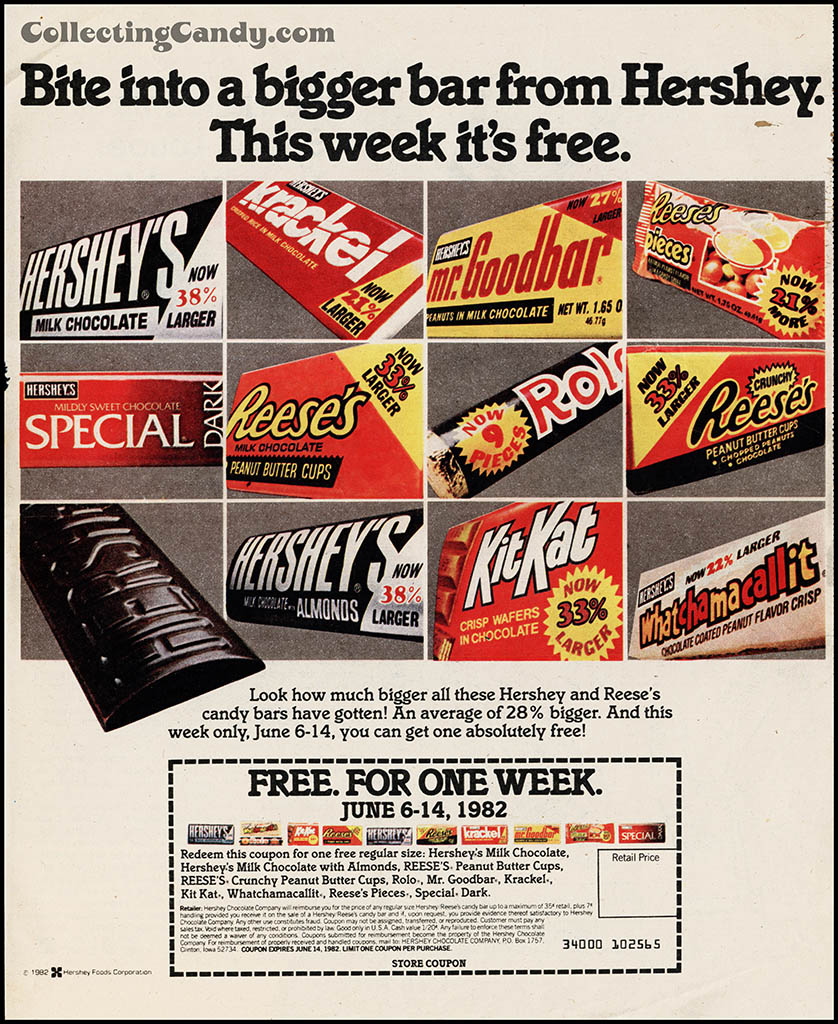 The cut-out coupon went one further by making it redeemable for one bar entirely for free: 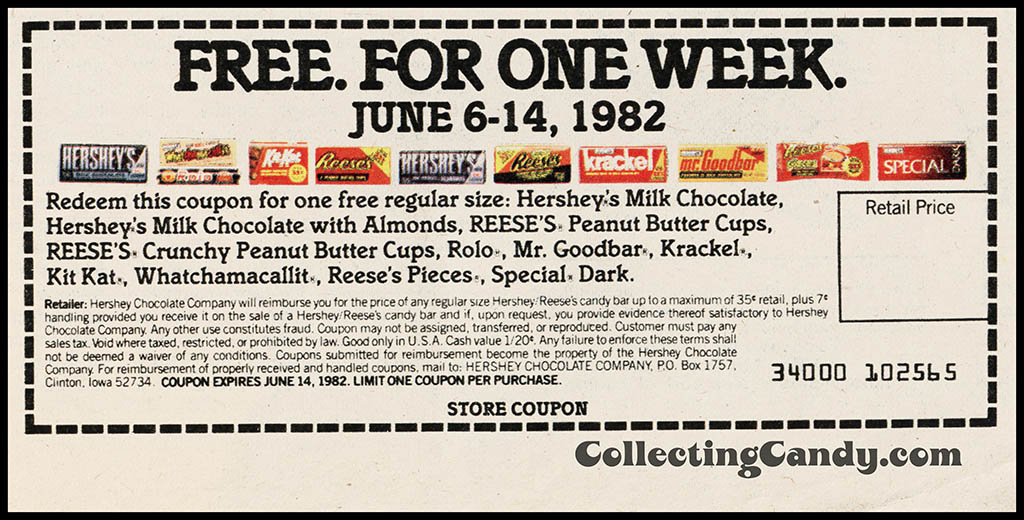 I’ve come to have a special appreciation for shared promotions like the Hershey’s Now Larger campaign, so it’s been a wrapper set I’ve wanted to put together for a while.  In fact, I’ve spent years hunting for all of the different Now Larger wrappers and I recently found myself acquiring one of the last two pieces from the set I’d been missing.  I’m now down to only needing one piece, so even though I’ve not yet got the proper FULL set, it’s closer than I ever thought I’d be and I wanted to share.  Here they are: 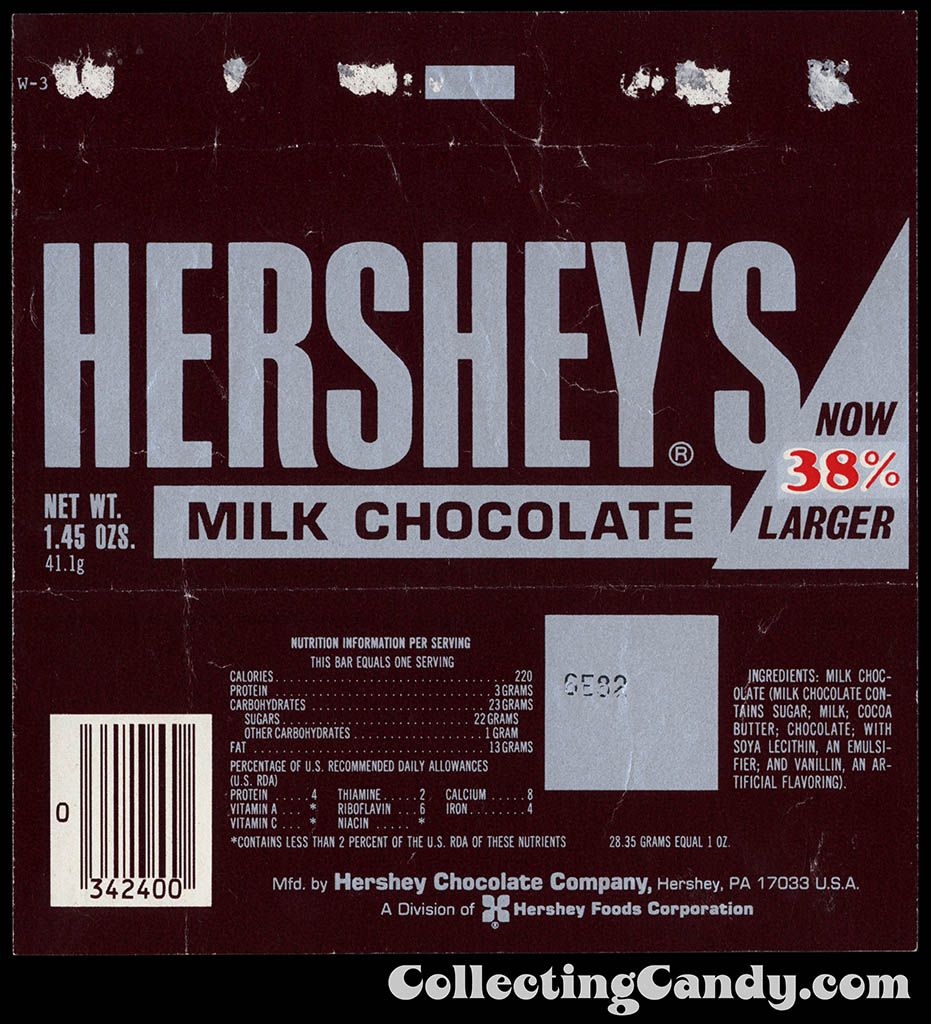 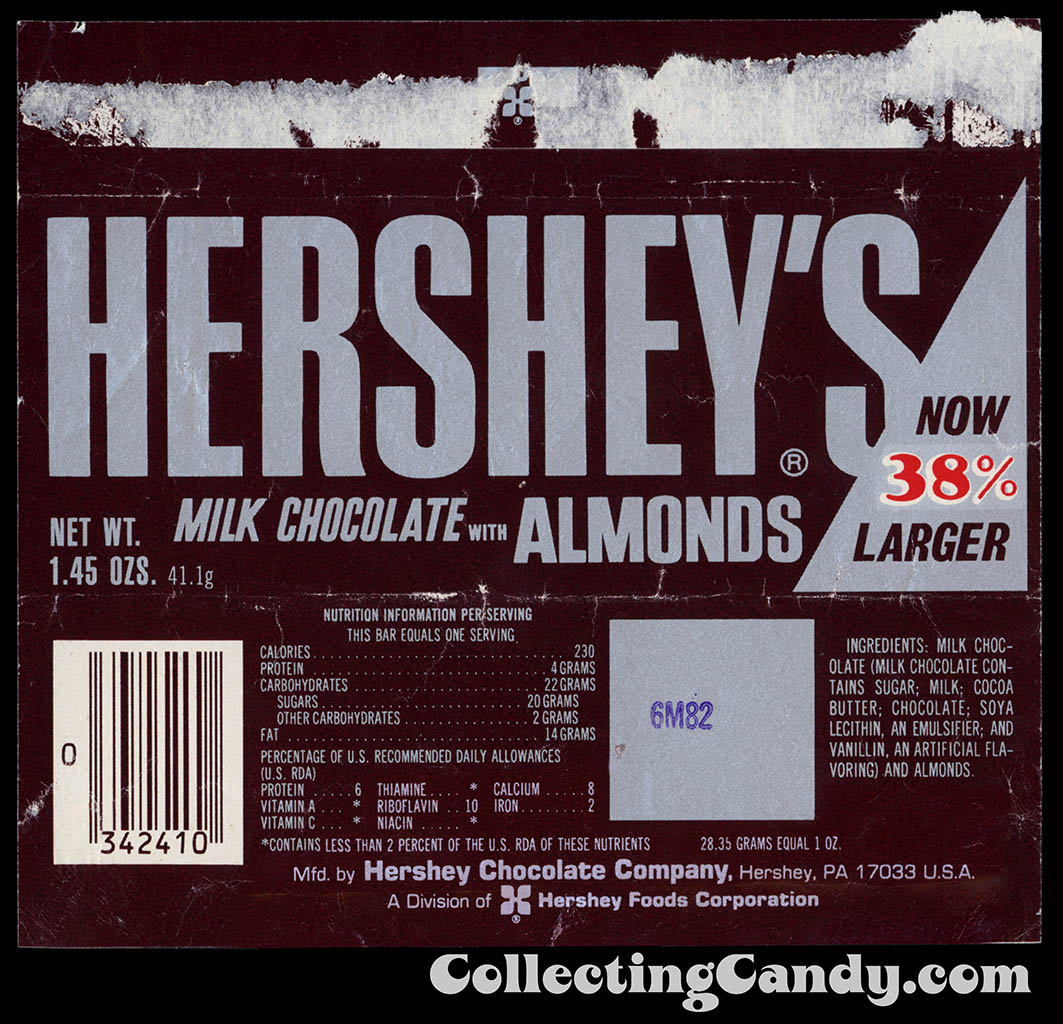 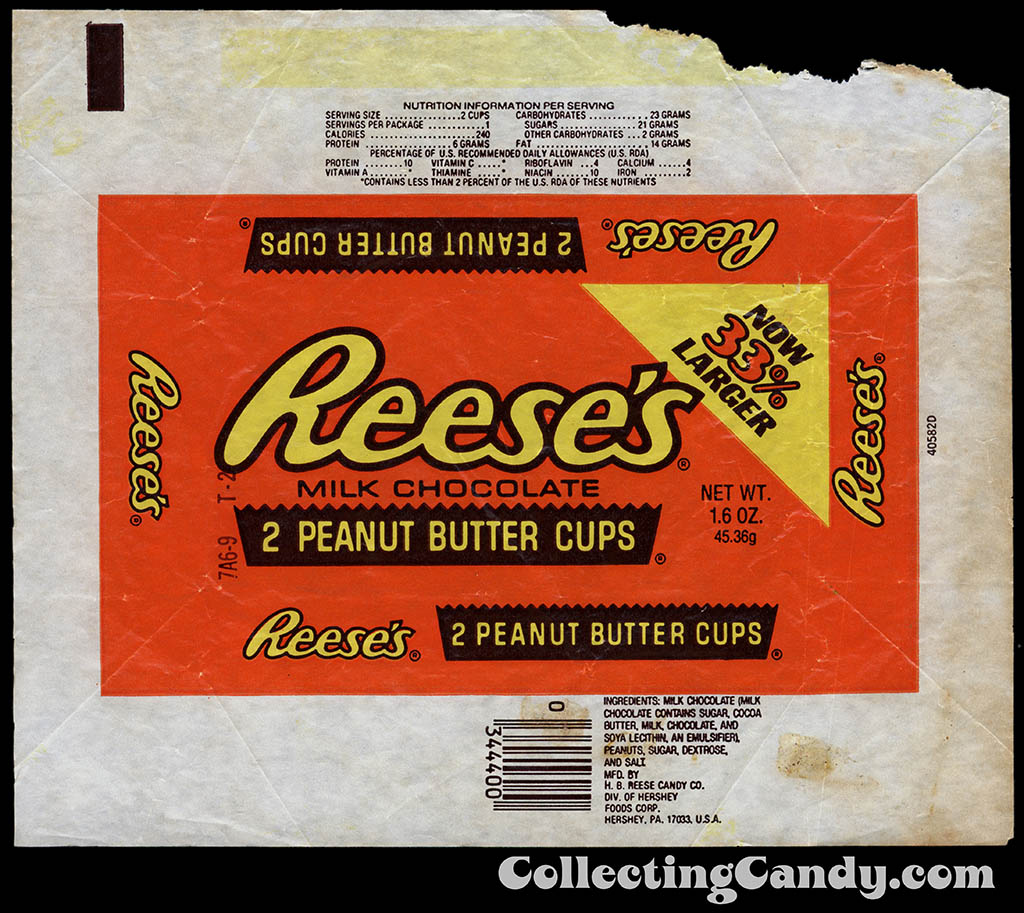 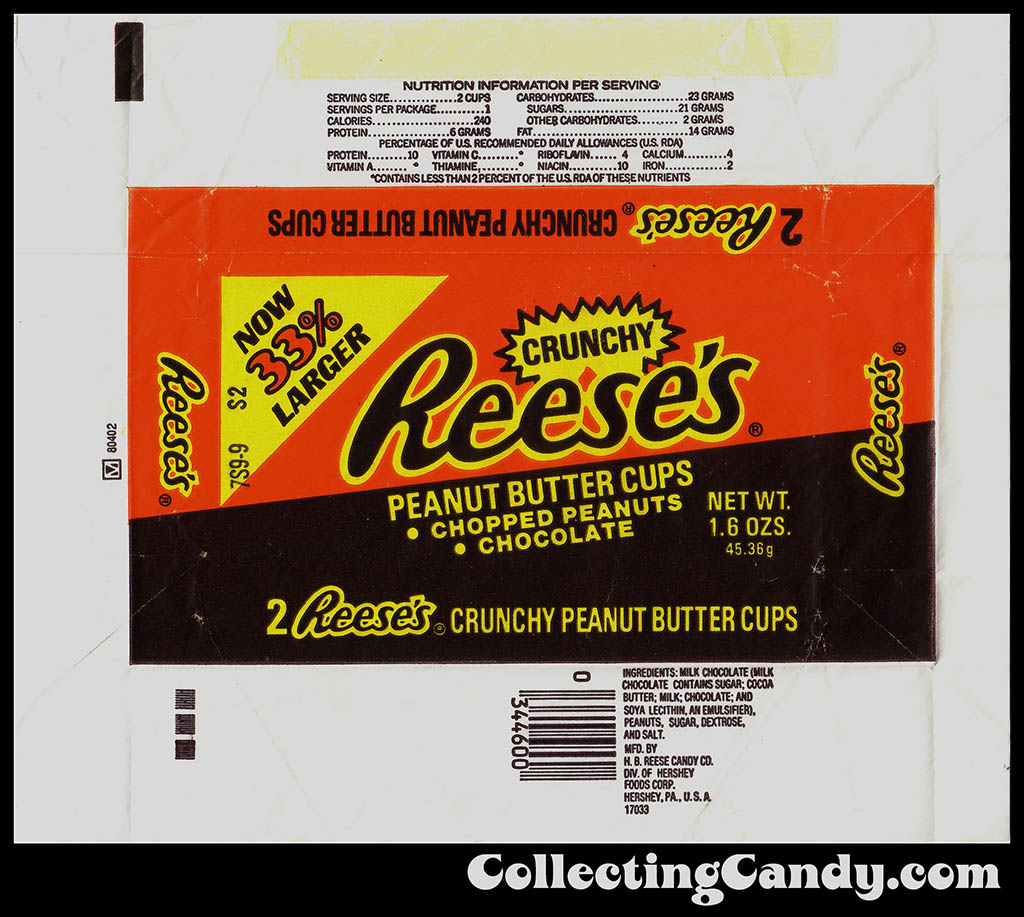 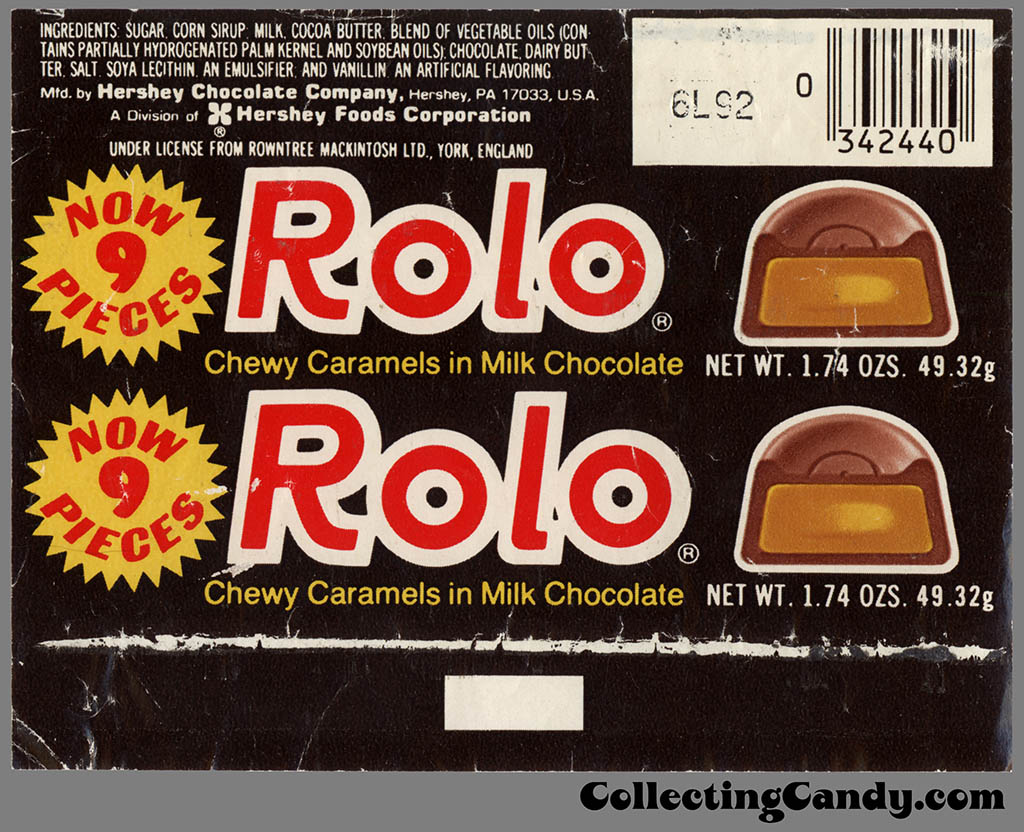 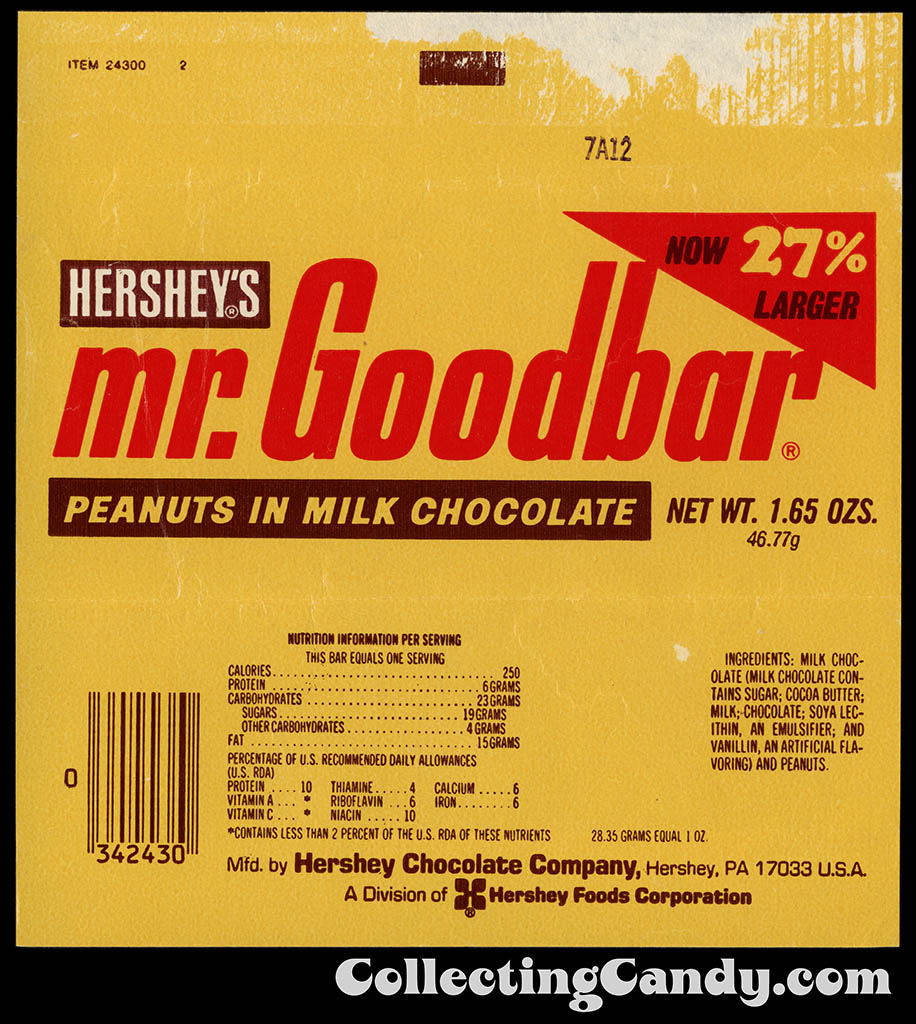 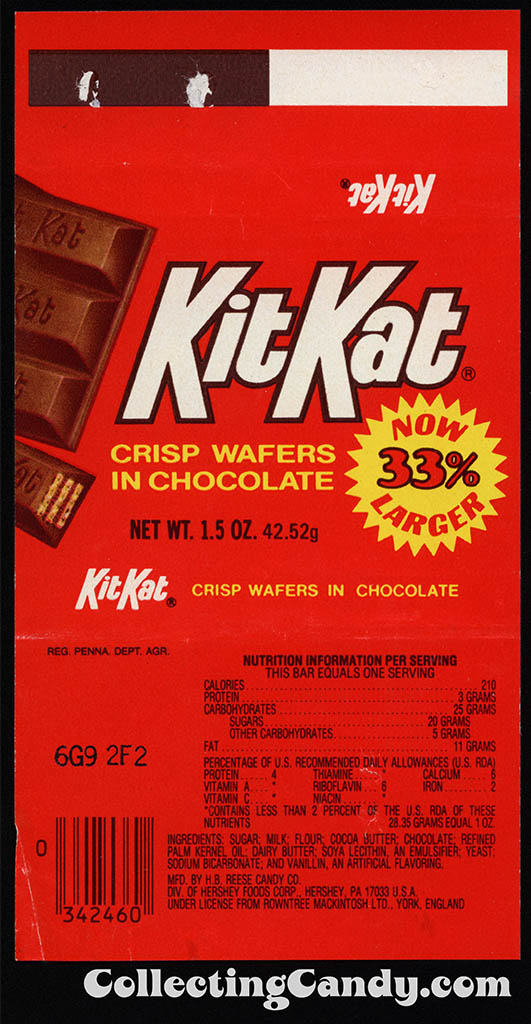 The piece I had long thought would be the toughest of this group to find was the Whatchamacallit and it very nearly was, but earlier this month I was lucky enough to acquire this one: 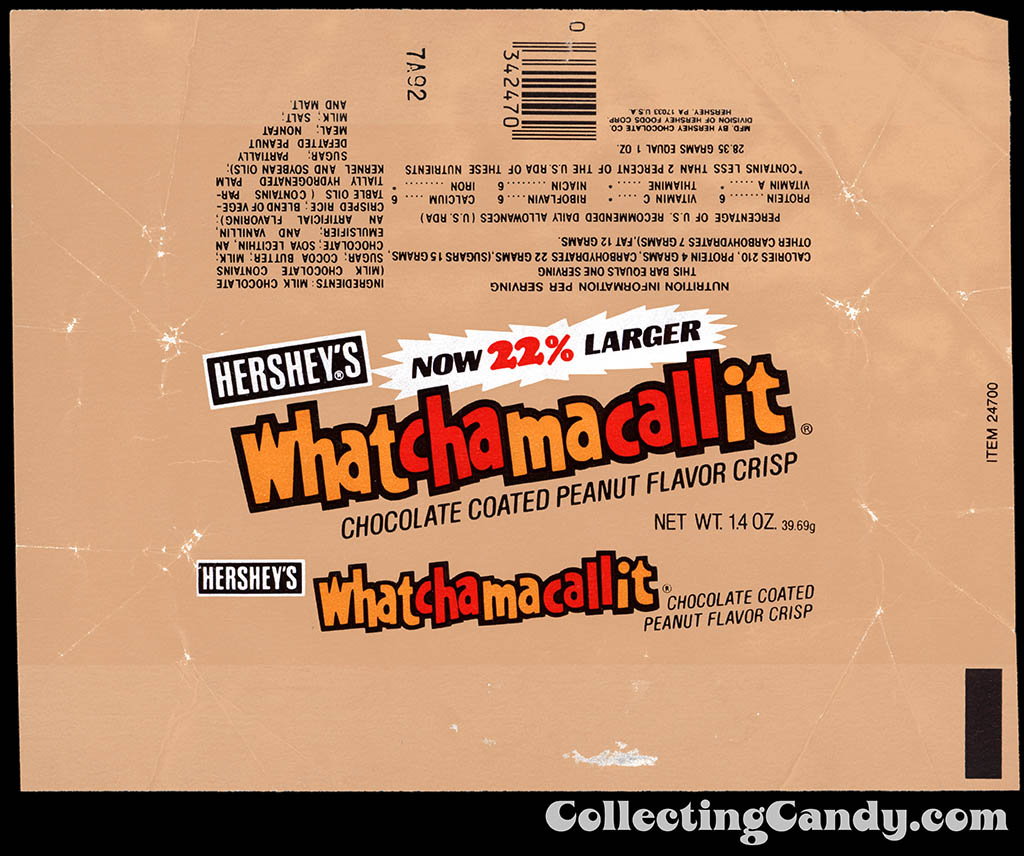 After so many years of wondering if I’d ever find one, that Whatchamacallit is a real beauty to now be able to share.

The final wrapper from this set that I still need is that from the “Now 21% Larger” Krackel bar.  The last piece of the puzzle for a proper full set and one I hope to find in the years to come.  And while I don’t have that exact one, I do have a Krackel wrapper from a similar promotion, likely from a couple of years later. 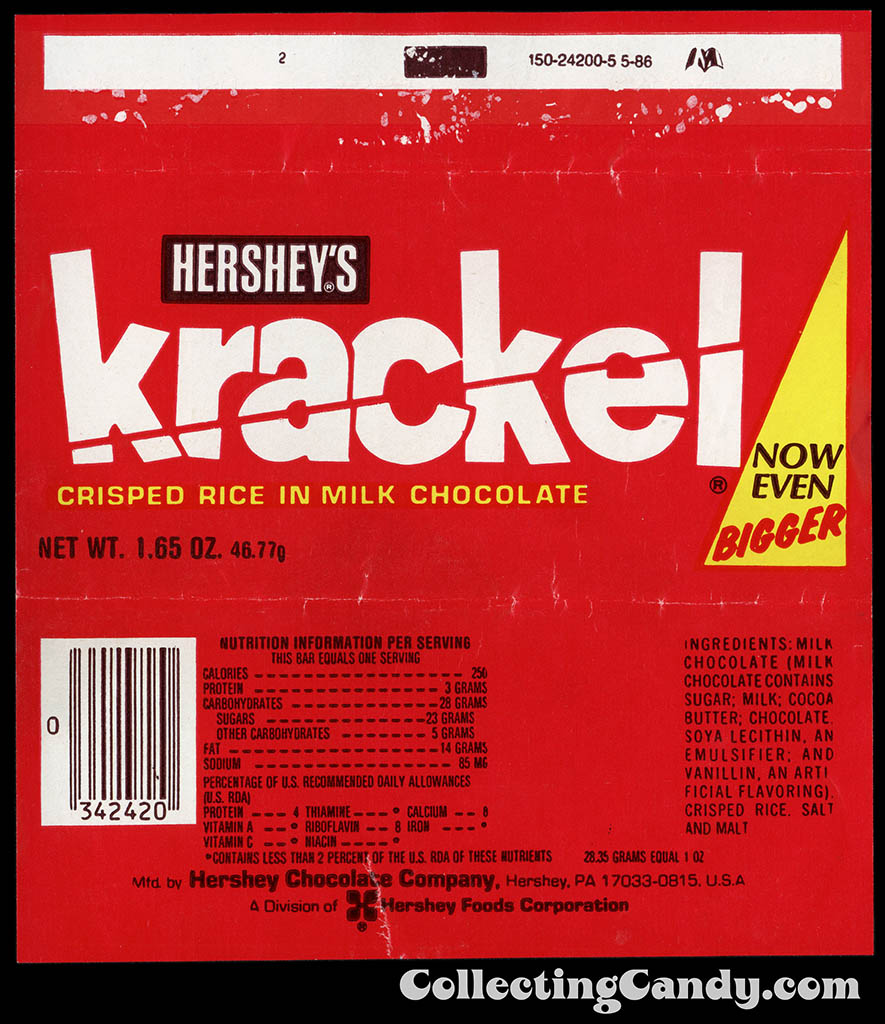 And that’s the Full Set (minus one) of Hershey’s Now Larger wrappers from 1982.  But I do have one more piece to share.  It’s a Hershey’s Big Block wrapper that had a “Now Bigger” call out of its own. 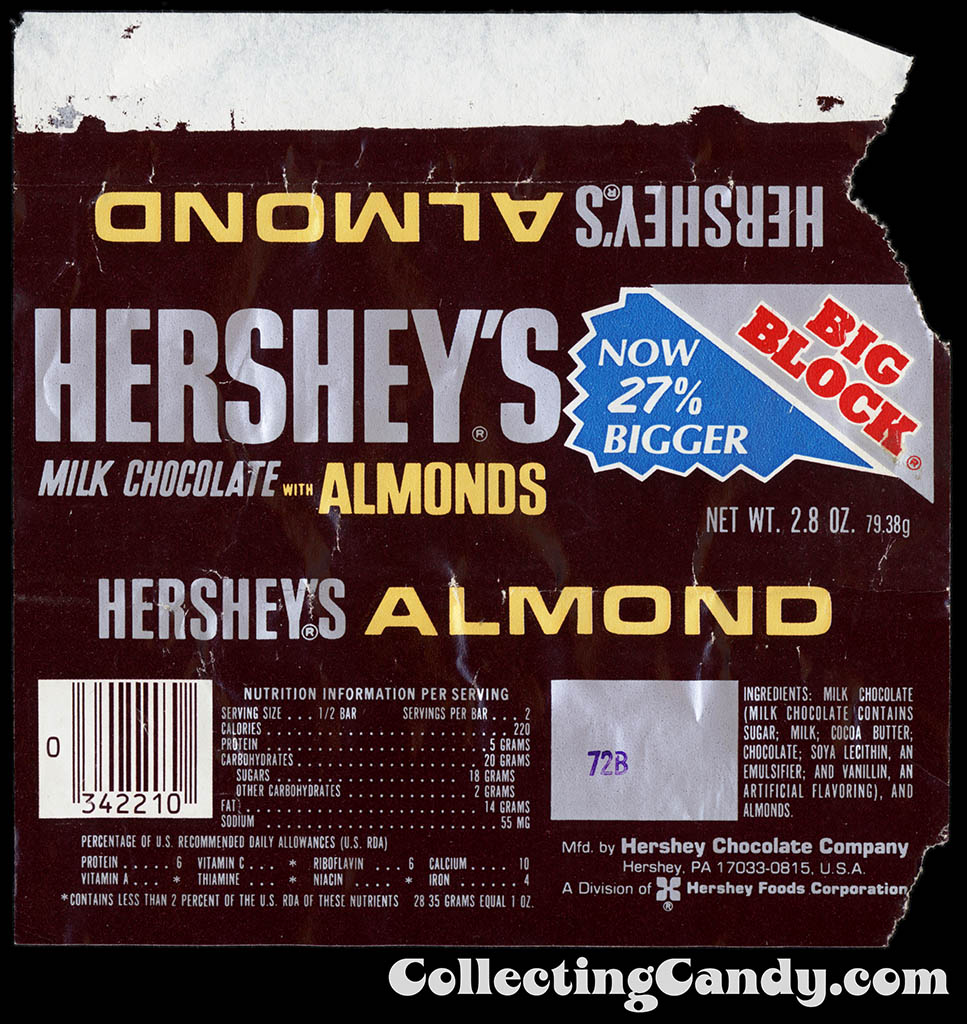 So while that’s the nearly full set of the 1982’s “Now Larger” wrappers, I’m left to wonder if there’s a complete set of “Now Bigger” wrappers from a few years later which also included the Big Block bars?  If it is, it’s a set I’m sure I’ll be working to collect from this point forward.  I’ve certainly got my work cut out for me, but what fun work it is.

And that’s everything for today’s post and our first installment of CollectingCandy.com’s Full Set Fridays.  Hope you enjoyed it and I’ll see you next time!

A New York City based writer, editor and sometimes actor. After spending much of the 1990′s in the comic book business helping tell the stories of Marvel Comics’ X-Men as series editor, he has since split his time between developing his own entertainment properties while still consulting and working on others. Having been described as “the Indiana Jones of lost and forgotten candy”, Jason is one of the country’s premier candy collectors and historians with his discoveries appearing in countless blogs, magazines, newspaper articles, and books. Always happy to share his knowledge and unique perspectives on this colorful part of our popular culture, Jason has consulted with New York’s Museum of Food and Drink and has also been a featured guest on Food Network’s Heavyweights, France’s M6 Capital, and New York’s TheActionRoom.com. My Google Profile+
View all posts by Jason Liebig →
This entry was posted in 1980's, Chocolate, Full Set, Hershey and tagged 1980's, 1980's candy, 80's, 80's candy, 80's Hershey, candy collecting, candy collection, candy collector, candy wrapper collection, candy wrapper collector, collectible, collecting candy, confectionery, confections, full set, Hershey, Hershey's, packaging, packaging design, sweets, vintage candy wrappers, wrapper. Bookmark the permalink.