For today’s entry in our Countdown To Halloween, I’m going to look at a selection of offerings from Praim Confections.  It’s a company you probably haven’t heard of, but you’ve almost certainly seen their seasonal bars and appreciated their strong design or humor.   Make the jump to check them out!

I first started noticing bars from the Bloomsberry Chocolate Company a number of years ago, and they stuck out to me for their bold package graphics and design.  Bloomsberry would eventually become Praim a few years later and continue the broad range of distinctive bars they were known for.

For those that aren’t familiar with the brand, Praim might be best known for their “Emergency Chocolate” type of offerings, like this one: 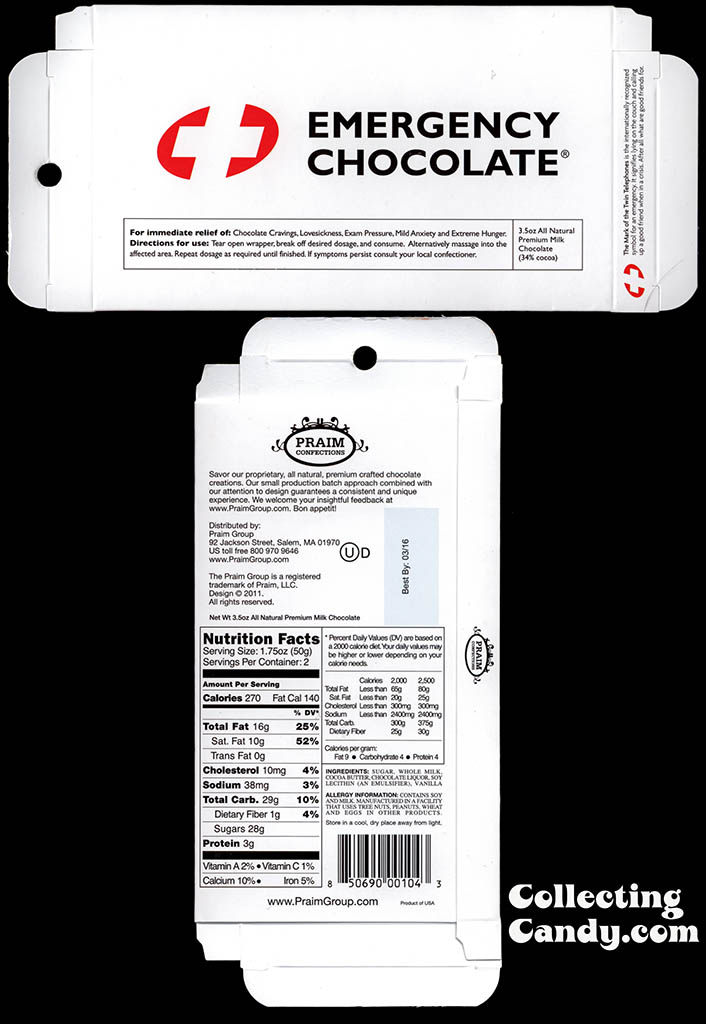 I’ve featured wrappers from Praim bars once before here on CollectingCandy.com – just last year for Hanukkah – when I showcased their Mensch on a Bench bar.

Getting back to the holiday at hand, here’s an early example of a pre-Praim, 2008 Bloomsberry Halloween Chocolate bar box from my archives: 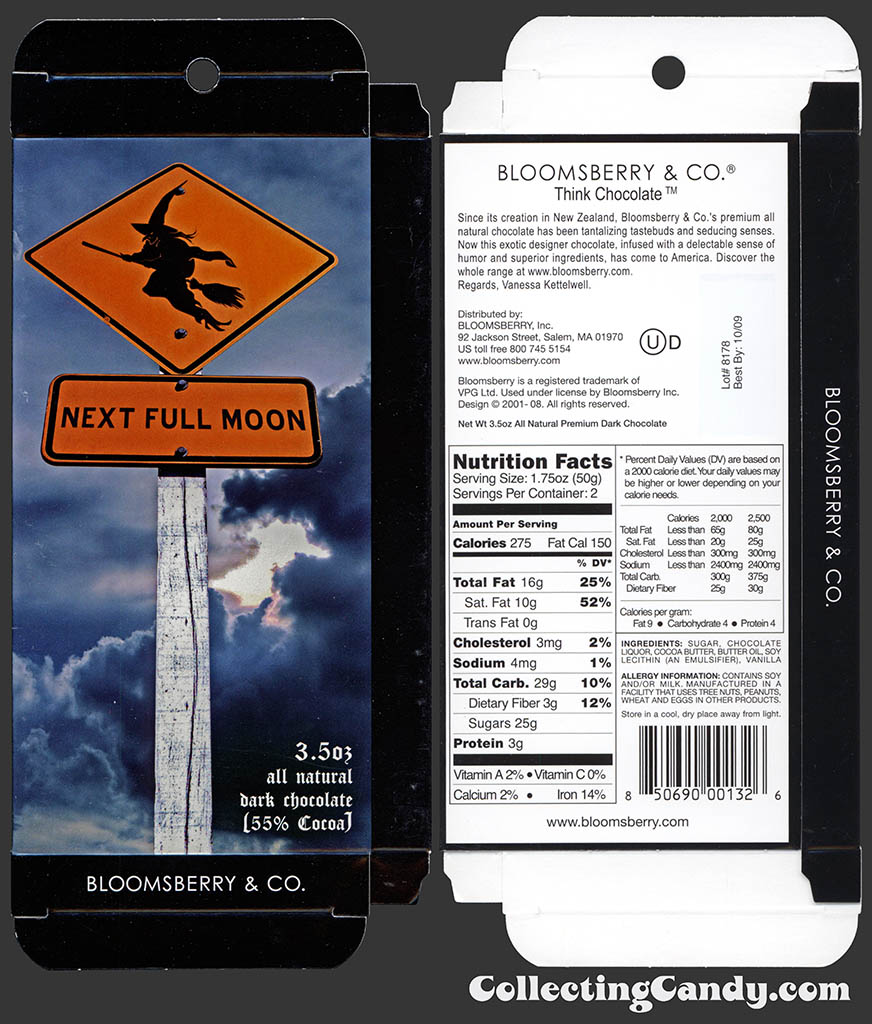 By 2013 Bloomsberry was now Praim, and here’s a nice graphical Halloween offering from that year:

Praim also gave us a Halloween variation of their trademark “Emergency Chocolate” bar in 2014: 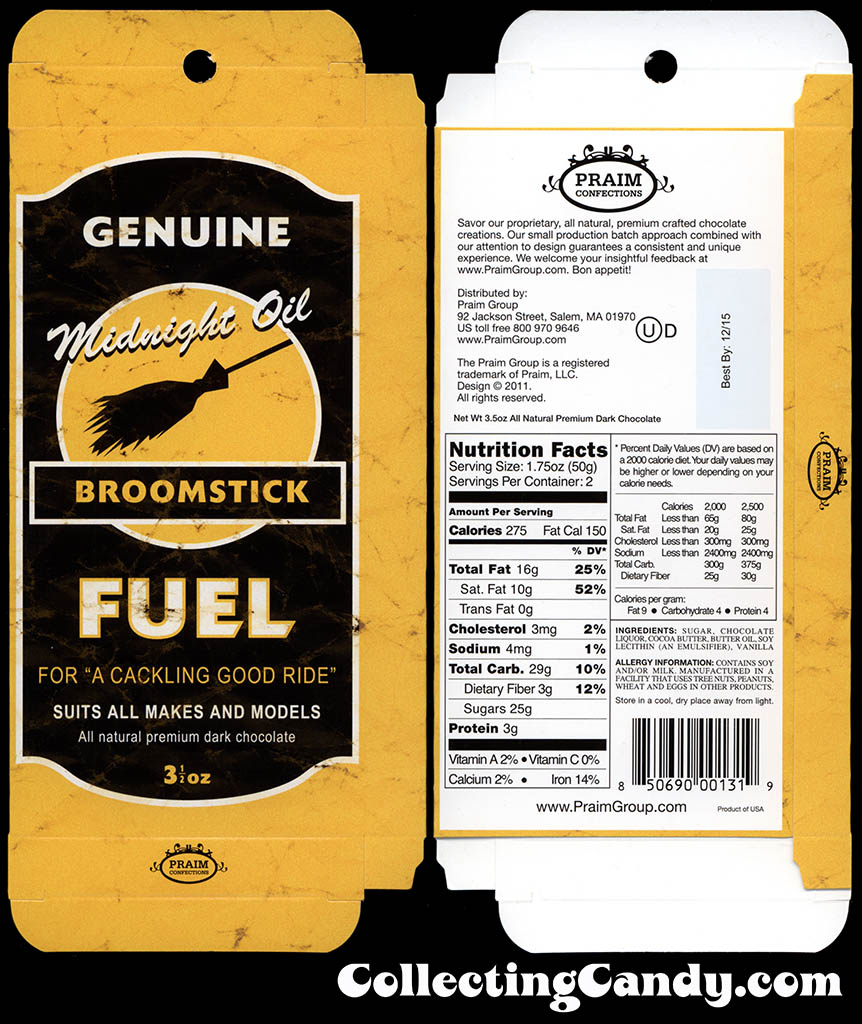 Finally getting up to the 2016 Halloween season, Praim has produced an activity promotion on their bar wrappers called “You’ve Been Booed”.

The idea here is to use the wrappers from their specialty bars as part of your Halloween seasonal tradition.  I should note that, so far, I’ve only found these at Target stores so they could be a soft-exclusive to that chain.  Not sure if it will catch on, but I think that the “You Have Been Booed!” concept is a cute one. 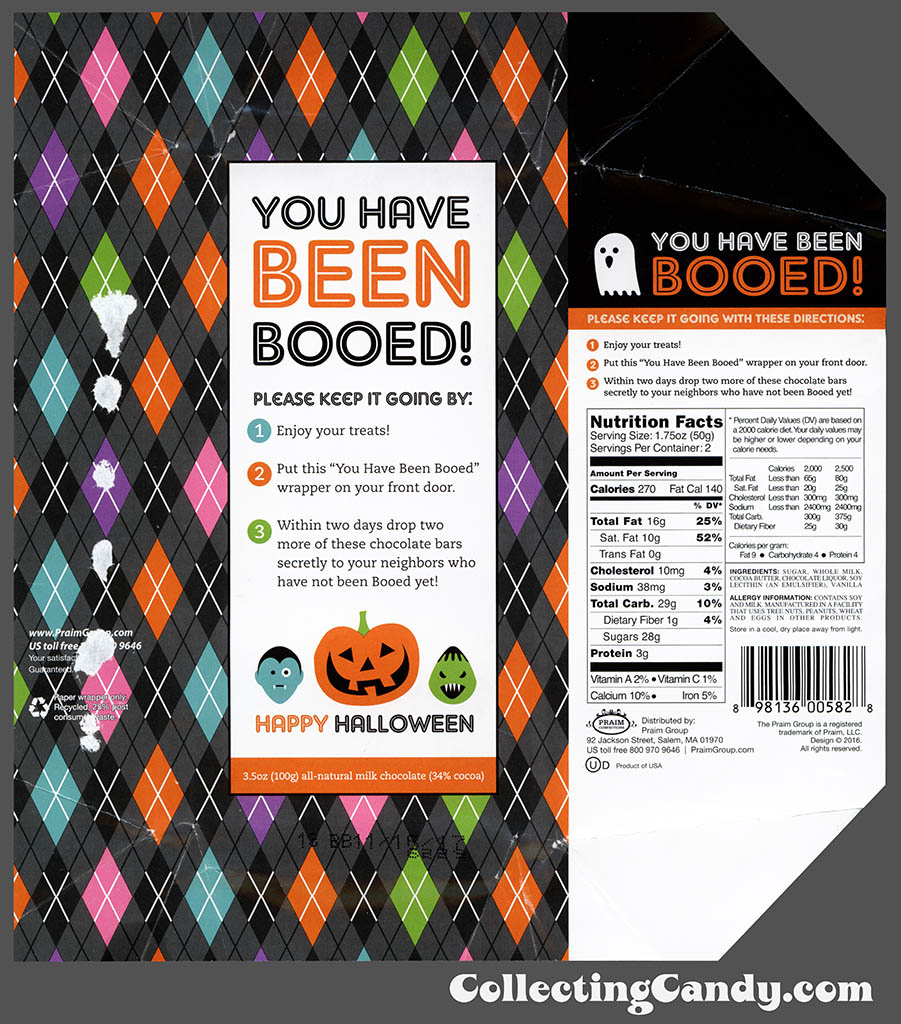 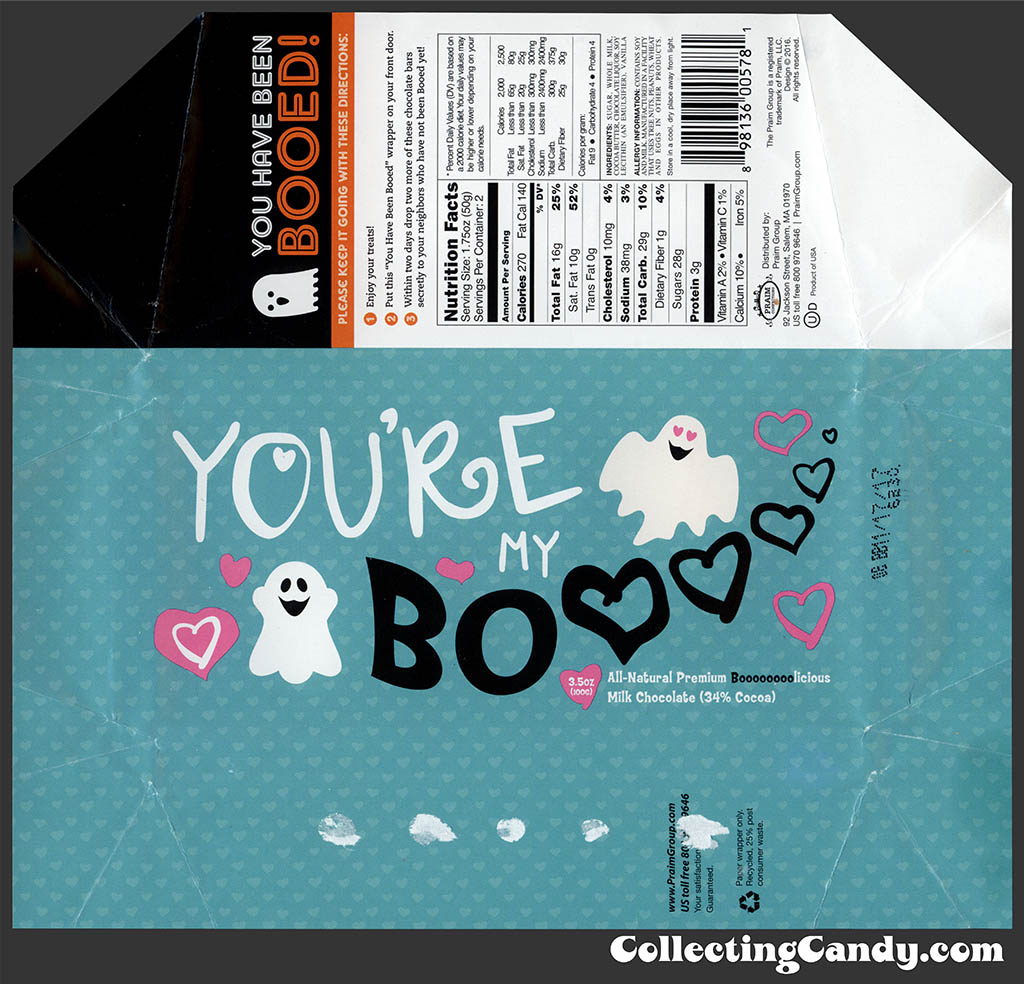 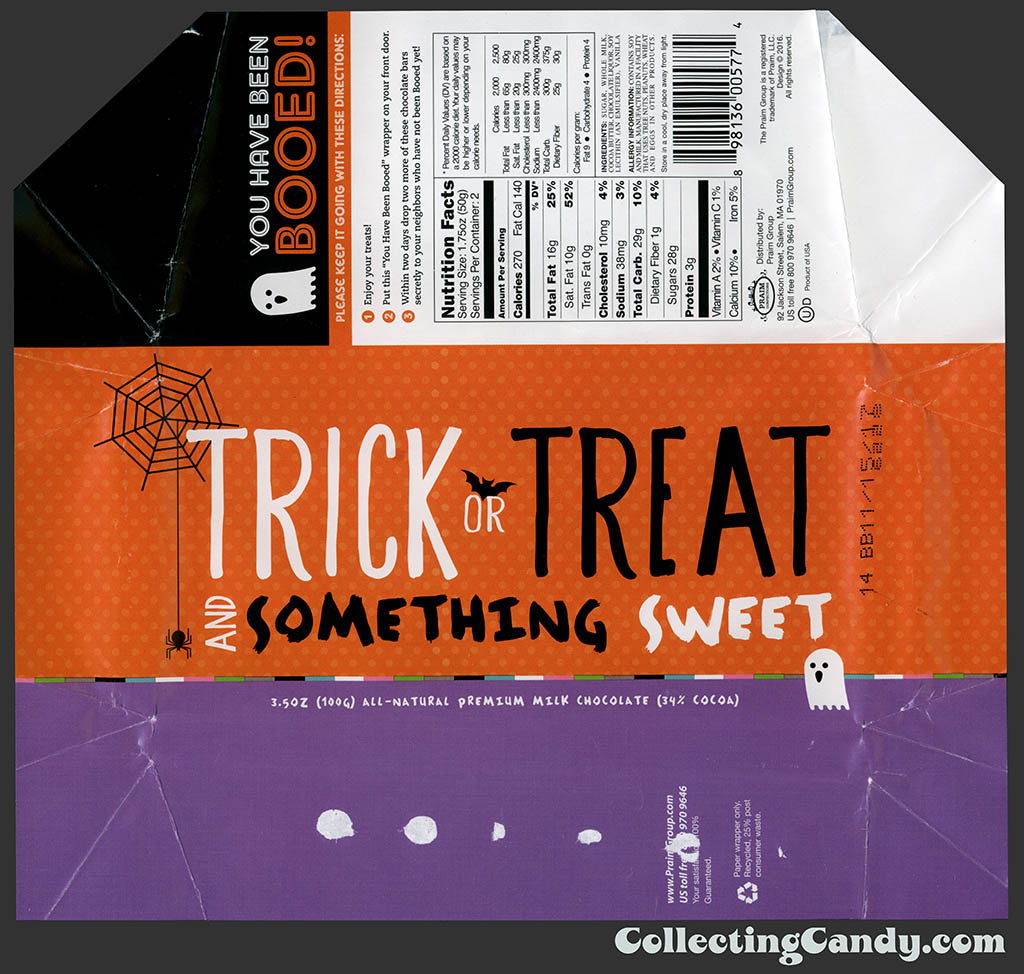 And that’s everything I’ve got to share on Praim’s “You’ve Been Booed” promotion and their history of fun Halloween bars.  See you next time!

A New York City based writer, editor and sometimes actor. After spending much of the 1990′s in the comic book business helping tell the stories of Marvel Comics’ X-Men as series editor, he has since split his time between developing his own entertainment properties while still consulting and working on others. Having been described as “the Indiana Jones of lost and forgotten candy”, Jason is one of the country’s premier candy collectors and historians with his discoveries appearing in countless blogs, magazines, newspaper articles, and books. Always happy to share his knowledge and unique perspectives on this colorful part of our popular culture, Jason has consulted with New York’s Museum of Food and Drink and has also been a featured guest on Food Network’s Heavyweights, France’s M6 Capital, and New York’s TheActionRoom.com. My Google Profile+
View all posts by Jason Liebig →
This entry was posted in Chocolate, CountdownToHalloween, Halloween, Holiday and tagged candy collecting, candy collection, candy collector, candy wrapper collection, candy wrapper collector, collectible, collecting candy, confectionery, confections, Halloween, Halloween candy, packaging, packaging design, seasonal, sweets, vintage candy wrappers, wrapper. Bookmark the permalink.