For those that aren’t familiar with the name, Unreal Candy is marketed as an organic and affordable alternative to some of the big brand mainstays of the candy isle.  On the packaging design side of things, they launched with a remarkably bold look which I wrote about back in 2012.  In 2013 they made visual adjustments, bringing an appearance to their product that was more accessible while still being edgier than those that they were differentiating themselves from.  I haven’t had cause to post about them again until this week when I came across their awesome new line of Halloween/Day of the Dead-themed offerings.  Make the jump to check them out!

Based on the previous articles I’d written on them, I’d come to expect strong design choices from the Unreal Candy Company, but I’d never seen them put out anything seasonal before.   And as Halloween candy sections were put up at the stores I’d visited this year, that remained true – I was simply not seeing anything from Unreal in those Halloween sections.  Then, during a trip to a New Jersey Target store just last week, I encountered this display and my eyes popped out of my head: 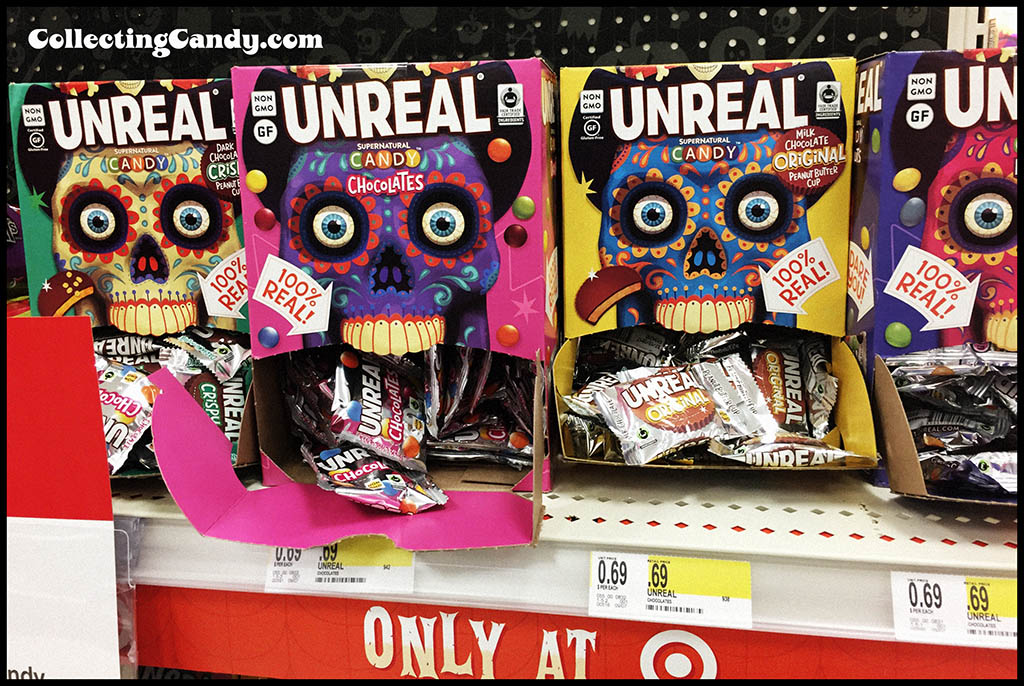 Talk about striking – those Day of the Dead packaging graphics really grabbed my attention!

Then I saw what I would come to learn was a Target Exclusive tin – so pretty, and boldly incorporating their clever Halloween tie-in tagline “Unreal Candy – It’s Super-Natural”:

As much as I liked that piece, I opted to not pick it up.  But I did grab all three different multi-packs they had, each one sporting a color variation of their “Supernatural Candy” Day of the Dead Halloween graphics. 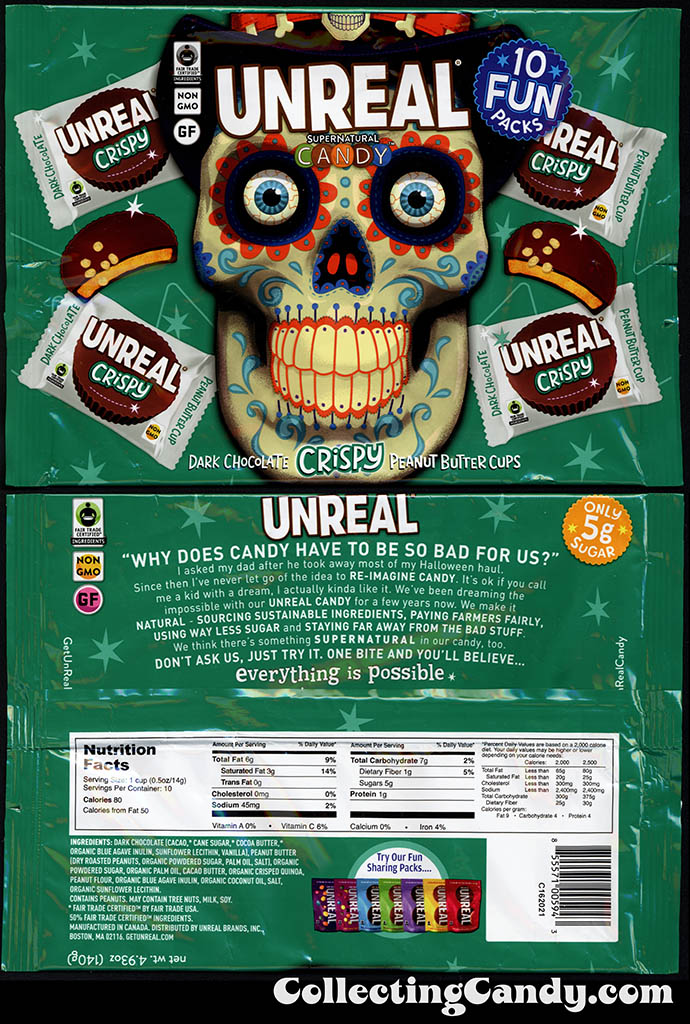 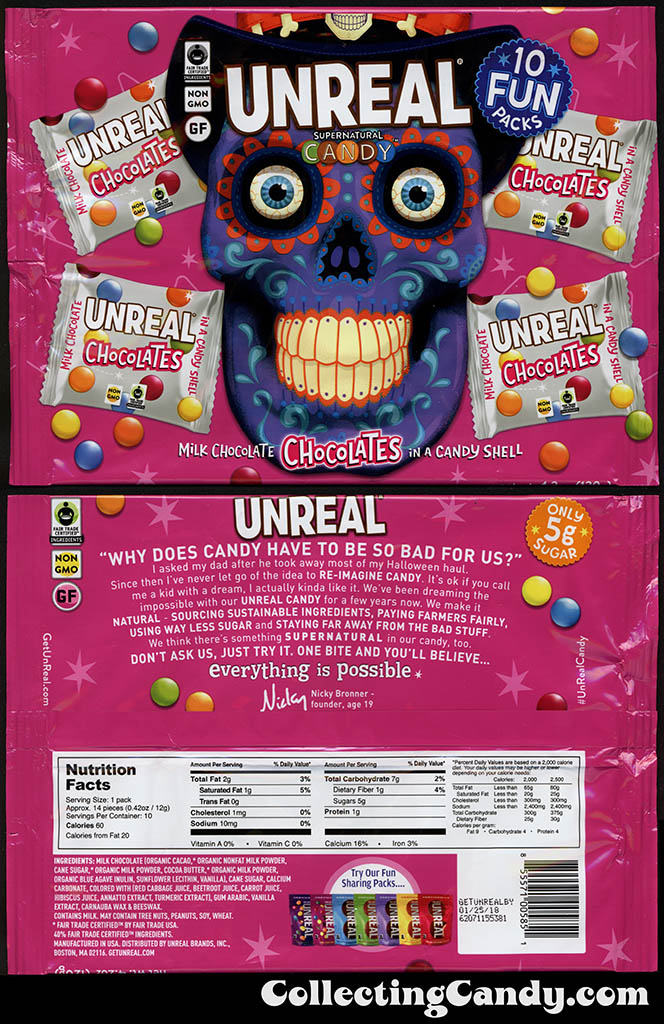 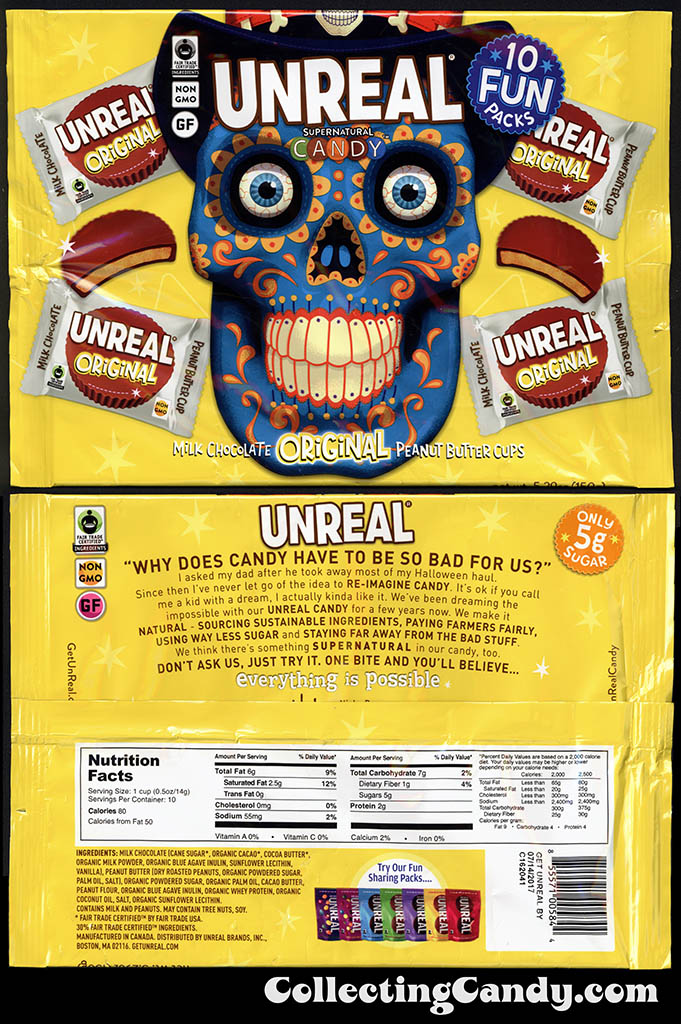 Even though there were only three of those 10-packs, there were actually four different fun-size offerings across those and the box dumps.  These individual packs don’t incorporate any of the Halloween graphics on them, so they are likely the same as what you’d find in their all-year-round offerings: 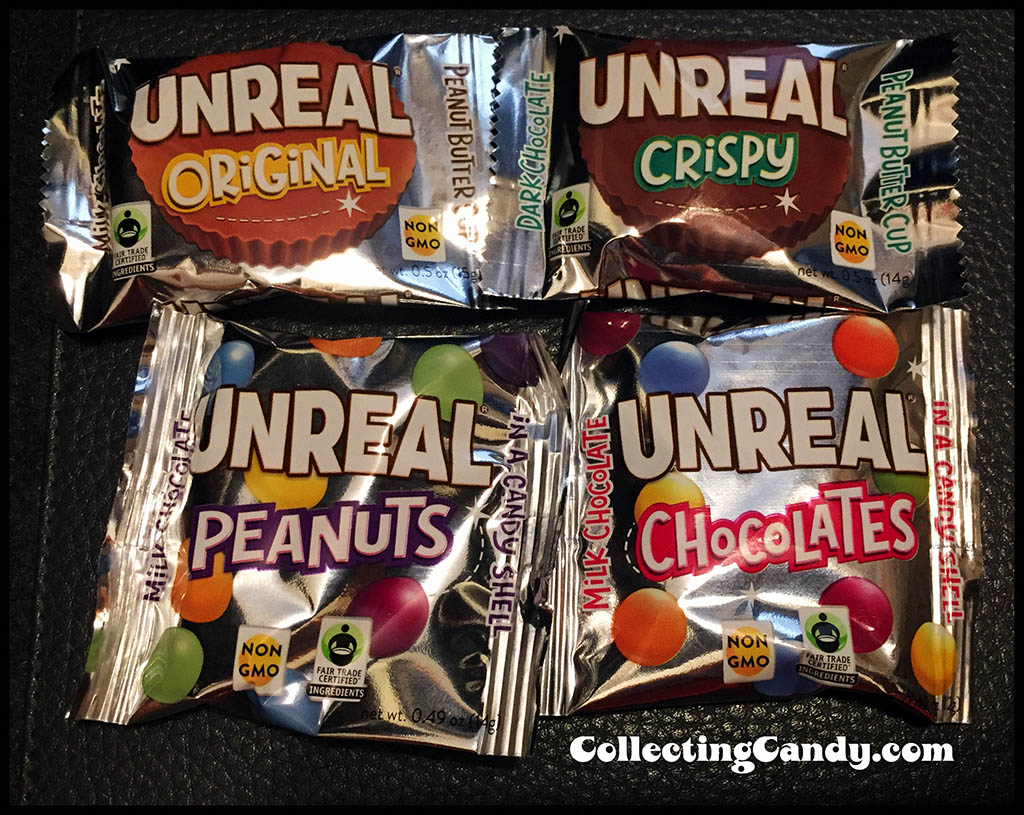 It’s great to see a company like Unreal getting into the seasonal packaging area, and doing it with such visual aplomb.  I really do love what they did here.

And that’s everything I’ve got on Unreal Candy’s awesome “Supernatural Candy” Halloween offerings.

A New York City based writer, editor and sometimes actor. After spending much of the 1990′s in the comic book business helping tell the stories of Marvel Comics’ X-Men as series editor, he has since split his time between developing his own entertainment properties while still consulting and working on others. Having been described as “the Indiana Jones of lost and forgotten candy”, Jason is one of the country’s premier candy collectors and historians with his discoveries appearing in countless blogs, magazines, newspaper articles, and books. Always happy to share his knowledge and unique perspectives on this colorful part of our popular culture, Jason has consulted with New York’s Museum of Food and Drink and has also been a featured guest on Food Network’s Heavyweights, France’s M6 Capital, and New York’s TheActionRoom.com. My Google Profile+
View all posts by Jason Liebig →
This entry was posted in Chocolate, CountdownToHalloween, Halloween, Holiday, Organic and tagged candy collecting, candy collection, candy collector, candy wrapper collection, candy wrapper collector, collectible, collecting candy, confectionery, confections, Day of the Dead, Halloween, Halloween candy, organic, packaging, packaging design, sweets, vintage candy wrappers, wrapper. Bookmark the permalink.