When documenting the history of candy, you can find yourself spending a lot of time tracking the ever changing landscape of the presently on-sale products and how they change.  Sometimes it’s a dramatic redesign or reformulation, but other times it can be a subtle tweak that nonetheless makes an impact.  With that in mind, today I’m going to cover 3 Musketeers Halloween “Muskefears” fun size and its 2016 evolution.  Make the jump to check it out!

Introduced during the 2015 Halloween season, 3 Musketeers Muskefears Fun Size was one of my favorite new offerings and I included it as part of my Countdown last year.  I felt that a spooky 3 Musketeers was a great addition to Mars’ Halloween line-up, so when I saw it back in stores this year, I wasn’t surprised.

But it wasn’t until a few weeks later when I was perusing the Halloween candy isle at my local Walgreens that I noticed that something “seemed different” about the Muskefears package I was looking at.  Quickly referencing my post from last year and comparing the package photo, I immediately realized what it was:  They had changed the silver foil mylar fun size wrappers to a red foil mylar.

It’s a great looking package (as it was last year) and even when seeing them side-by-side it might be seen as understandable that it took me a few passes to notice anything was different: 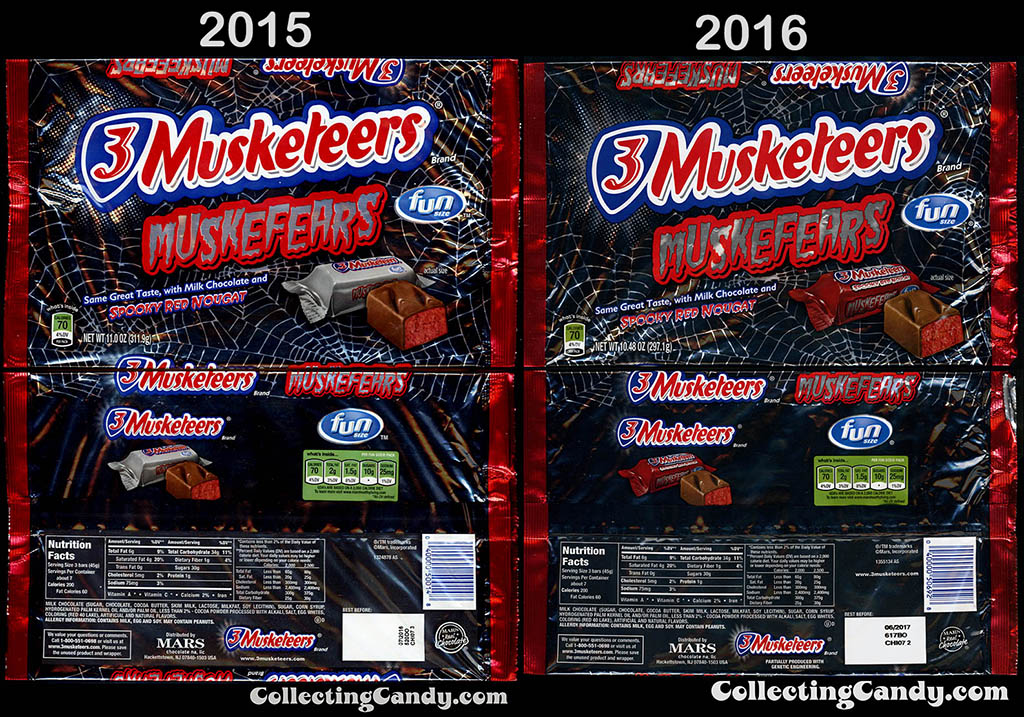 Of course, once I noticed the change, I had to pick up the new version.  Because.. it was DIFFERENT!  And I really wanted to check out those inner wrappers, too.  In my opinion, the new red Muskefears fun size wrappers were a big improvement from the original 2015 design.

When comparing the wrappers side-by-side, one can reasonably speculate why they made the changes they did: 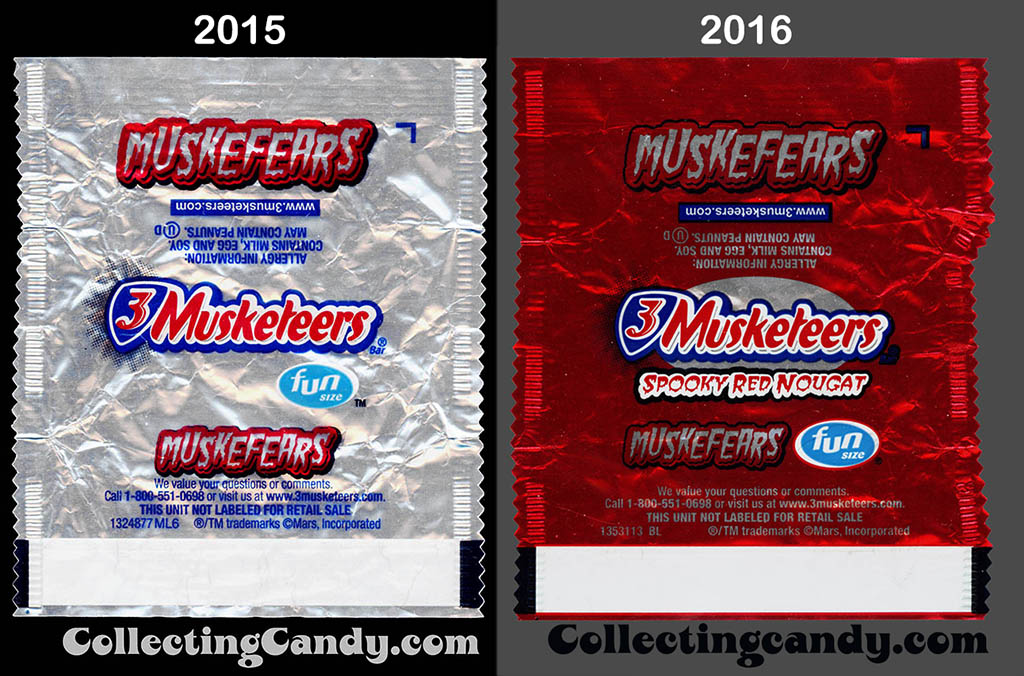 You see, Muskefears contain a “Spooky Red Nougat” and while the 2015 outer package points this out, that information is nowhere to be found on the individual fun size pack wrappers it contained.  So, you can guess that some folks, after biting into those bars might have thought that the 3 Musketeers they received in their trick-or-treat bags had somehow gone bad.

The redesigned 2016 wrappers not only solve this issue by highlighting the specially-colored nougat, but they also give us a more dramatic package overall that doesn’t so much resemble the standard all-silver 3 Musketeers bar like the 2015 version did – helping further avoid confusion.  So the change was not only practical, but it was also an aesthetic improvement.   That’s just good (re)design.

And that’s everything I’ve got on the 3 Musketeers Spooky Red Halloween Fun Size 2016 Evolution!  See you next time!

A New York City based writer, editor and sometimes actor. After spending much of the 1990′s in the comic book business helping tell the stories of Marvel Comics’ X-Men as series editor, he has since split his time between developing his own entertainment properties while still consulting and working on others. Having been described as “the Indiana Jones of lost and forgotten candy”, Jason is one of the country’s premier candy collectors and historians with his discoveries appearing in countless blogs, magazines, newspaper articles, and books. Always happy to share his knowledge and unique perspectives on this colorful part of our popular culture, Jason has consulted with New York’s Museum of Food and Drink and has also been a featured guest on Food Network’s Heavyweights, France’s M6 Capital, and New York’s TheActionRoom.com. My Google Profile+
View all posts by Jason Liebig →
This entry was posted in Chocolate, CountdownToHalloween, Halloween, Holiday, Mars and tagged 3-Musketeers, candy collecting, candy collection, candy collector, candy wrapper collection, candy wrapper collector, collectible, collecting candy, confectionery, confections, Halloween, Halloween candy, nougat, packaging, packaging design, sweets, vintage candy wrappers, wrapper. Bookmark the permalink.