Kicking off our 5th Annual Countdown to Halloween with a New Banner!

We are back today after an extended hiatus to kick off our 5th annual participation in the CountdownToHalloween blogging event.  Since it’s our fifth annual countdown romp, we’ve tweaked our Halloween-themed masthead and today we’ll be sharing the details, so make the jump to check it out!

Each year that we’ve taken part in the CountdownToHalloween, we’ve replaced our standard masthead banner graphic with one themed for the spooky holiday season.  Each subsequent year, it has received minor tweaks, but for our fifth time around, we decided to mix it up a little more by replacing the background collage with an entirely new one.

You can see each of the Halloween banners in order here: 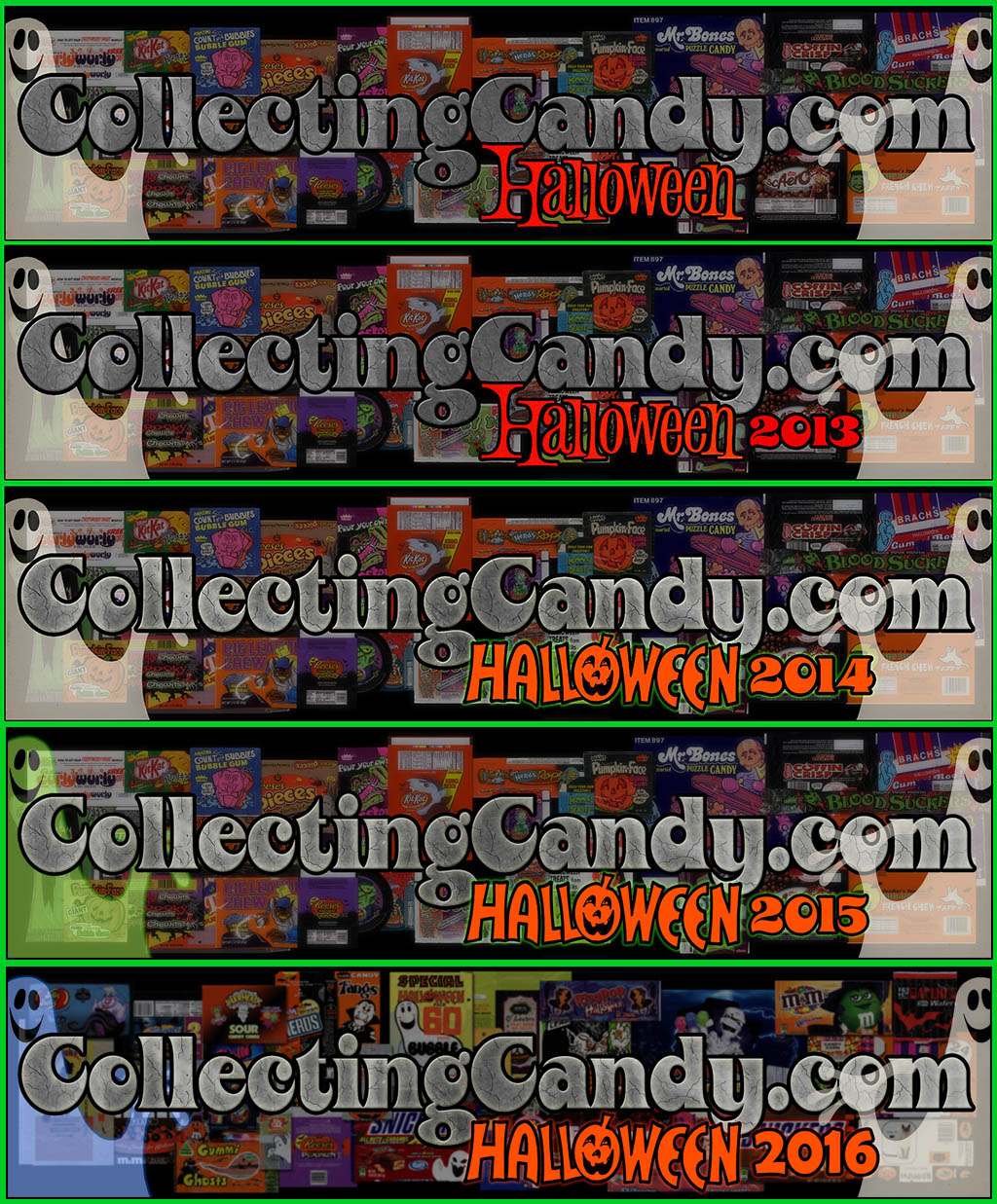 The changes over the years have been subtle.  For 2013, the only change was the addition of the year — 2014’s Countdown masthead got a brighter CollectingCandy logo and a new “Halloween” logo design — 2015 had one of the masthead ghosts turning green — Finally, 2016 saw that green ghost turning more blue and the background collage getting a complete redesign.

I’ve never exposed those background collages before, but today I’d like to show each one of them without being obscured.  Here they are:

The new banner background collage is made up over 30 different Halloween candy packaging scans, about a third of which are vintage with the remainder coming from the years since CollectingCandy.com launched.

It was fun reviewing so many of the new Halloween packages that have been introduced over the last few years (and that I’ve collected) and bringing them into this collage design.   It also has me excited to share a bunch more new and vintage Halloween candy items as our 2016 Countdown continues.

For now that’s everything we’ve got for our kickoff but we’ll be back with more Countdown to Halloween fun soon, and we’ll see you next time!!

A New York City based writer, editor and sometimes actor. After spending much of the 1990′s in the comic book business helping tell the stories of Marvel Comics’ X-Men as series editor, he has since split his time between developing his own entertainment properties while still consulting and working on others. Having been described as “the Indiana Jones of lost and forgotten candy”, Jason is one of the country’s premier candy collectors and historians with his discoveries appearing in countless blogs, magazines, newspaper articles, and books. Always happy to share his knowledge and unique perspectives on this colorful part of our popular culture, Jason has consulted with New York’s Museum of Food and Drink and has also been a featured guest on Food Network’s Heavyweights, France’s M6 Capital, and New York’s TheActionRoom.com. My Google Profile+
View all posts by Jason Liebig →
This entry was posted in CountdownToHalloween, Halloween, Holiday and tagged candy collecting, candy collection, candy collector, candy wrapper collection, candy wrapper collector, collectible, collecting candy, confectionery, confections, CountdownToHalloween, Halloween, holiday, packaging, packaging design, spooky, sweets, vintage candy wrappers, wrapper. Bookmark the permalink.