Hanukkah began on Sunday night earlier this week and it is a holiday I’ve been wanting to acknowledge here on CollectingCandy.com for some time.  I’ve finally gathered up enough fun Hanukkah-related candy items to share, so make the jump to check them out!

I’ll kick off my coverage with a delightful pair of chocolate bars I found this month featuring a Hanukkah-themed version of the popular “Elf on the Shelf” called The Mensch on a Bench.  Just saying that out loud makes me smile – these bars are great! 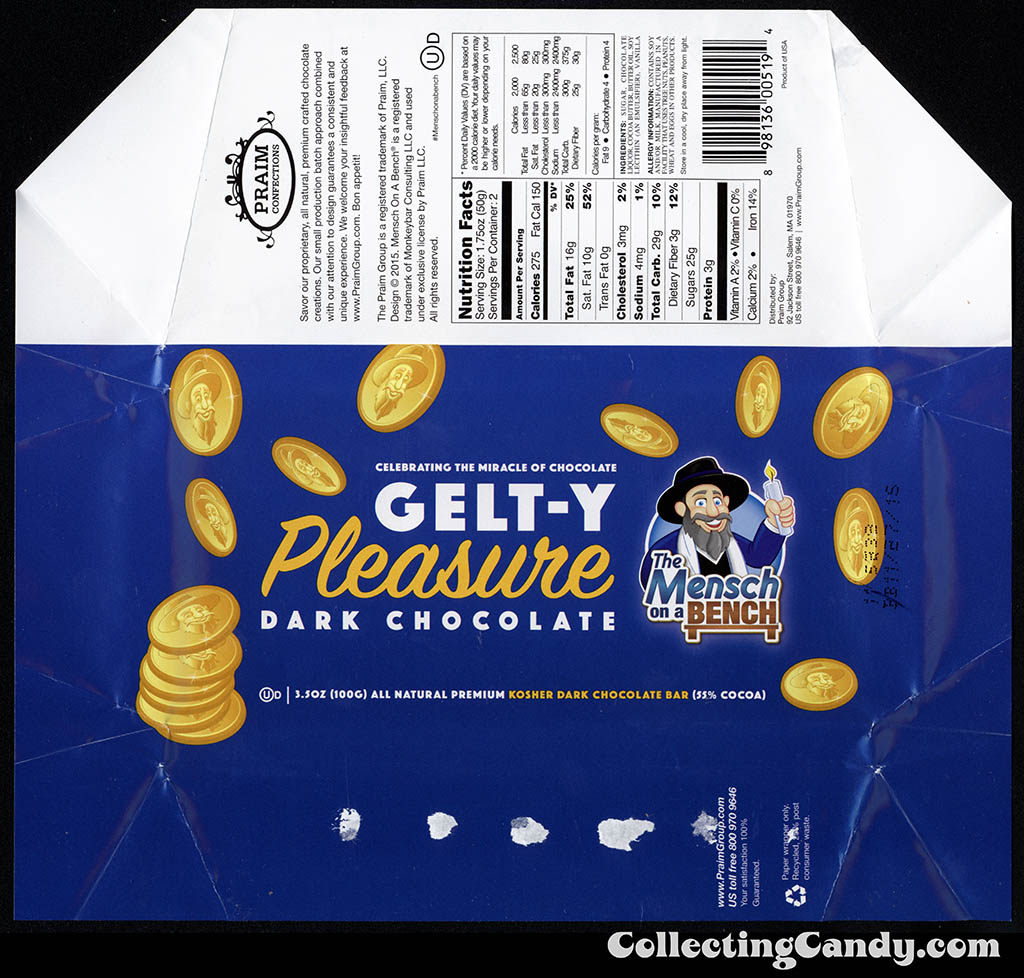 Another specifically Hanukkah-themed candy piece I picked up this year came from one of my favorite companies, Just Born.  This comes out of their gourmet jellybean line, Teenee Beanee; a “Menorah Mix”: 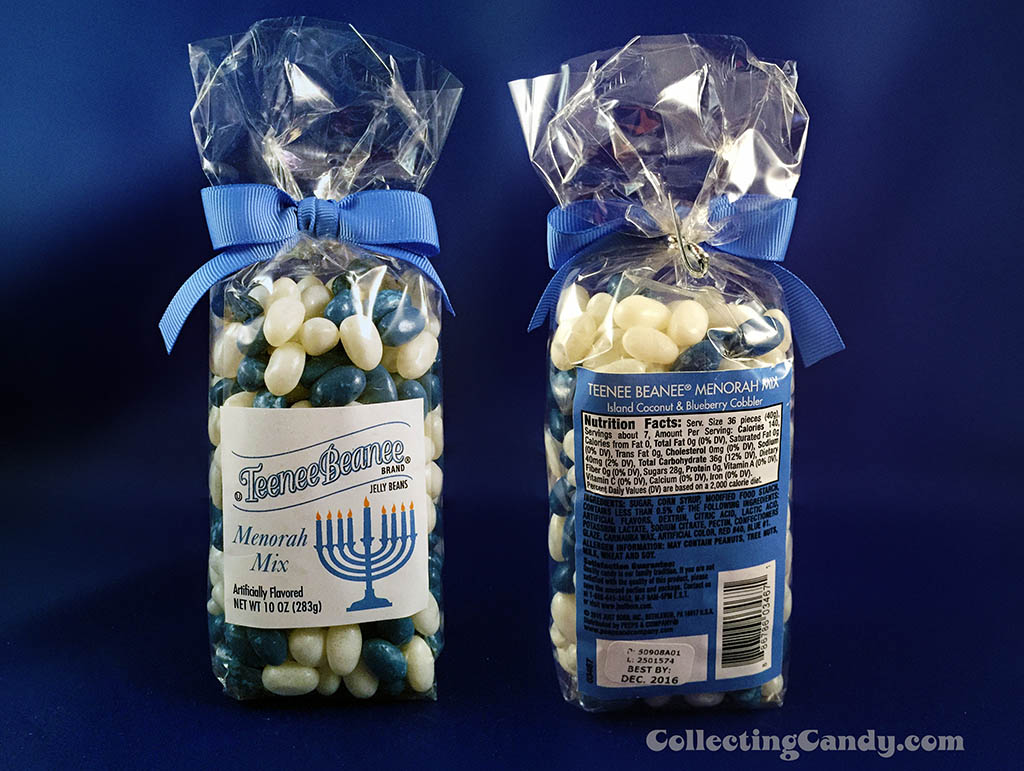 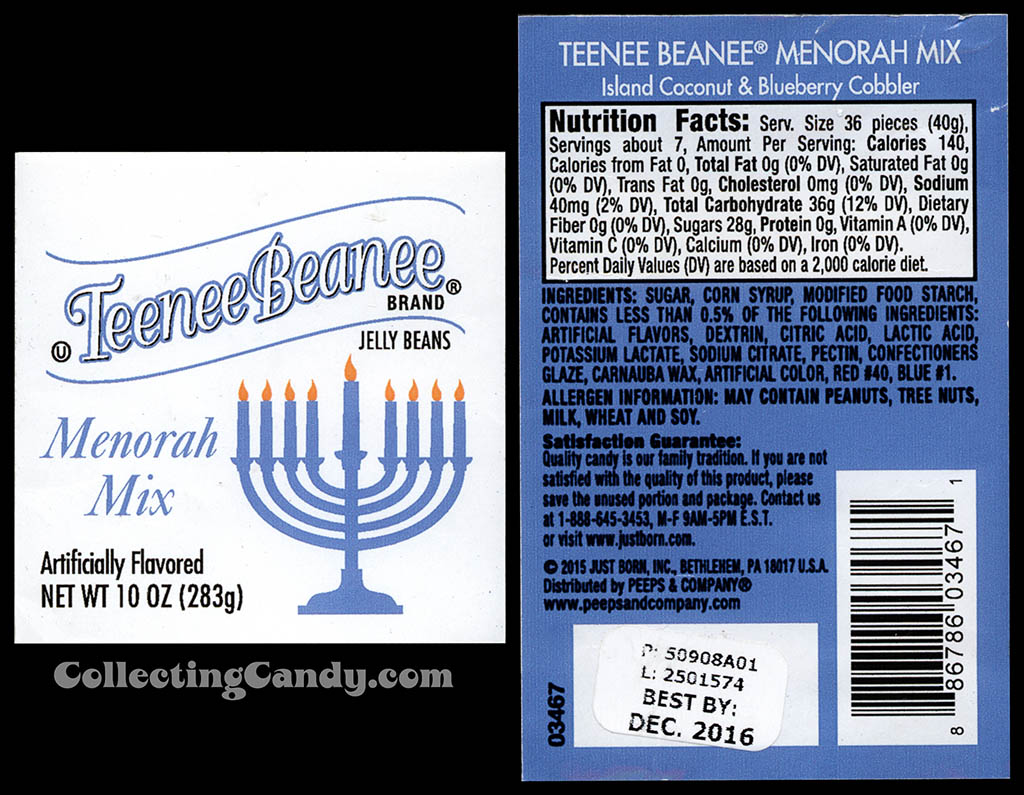 Outside of those Hanukkah-themed confectionery, there is the related-yet-larger scope of kosher candy offerings.  Kosher foods are those that conform to Jewish dietary law.  It’s a little complicated but you can read more about it here.  There are many candy offerings from many companies that are certified kosher but for today’s post, I’m going to zero in on a pair of manufacturers.  Strauss-Elite from Israel and the Paskesz Candy Company from here in New York.

I first wrote about Strauss-Elite back in January of 2014 when I featured their surprising and unique Bazooka bubblegum-flavored white chocolate bar.  Still one of the most unusual bars I’ve ever sampled.

Elite produces all kinds of candy but for me the most interesting thing they make is their classic Bazooka bubblegum.   And while classic Bazooka is no longer offered by Topps here in the United States (they’ve updated their formula and flavors here to meet contemporary tastes), you can still get the original from Elite.  Take a look at a recent package I picked up: 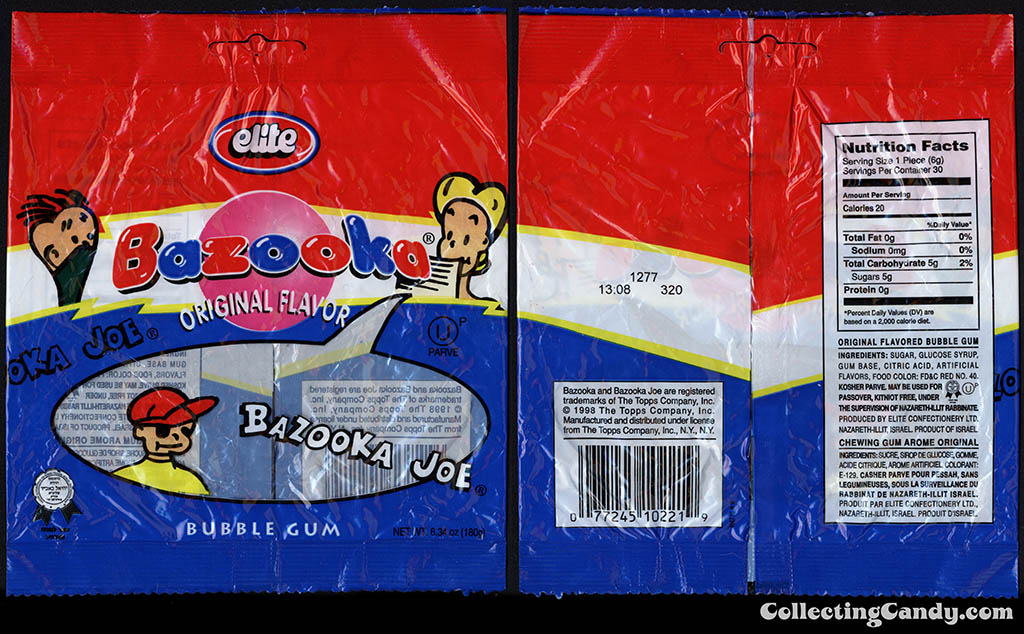 Elite’s Bazooka bubblegum is fully-licensed and tastes exactly like the Bazooka that I grew up with.  It’s awesome and even includes the comics (though I admittedly couldn’t read these). 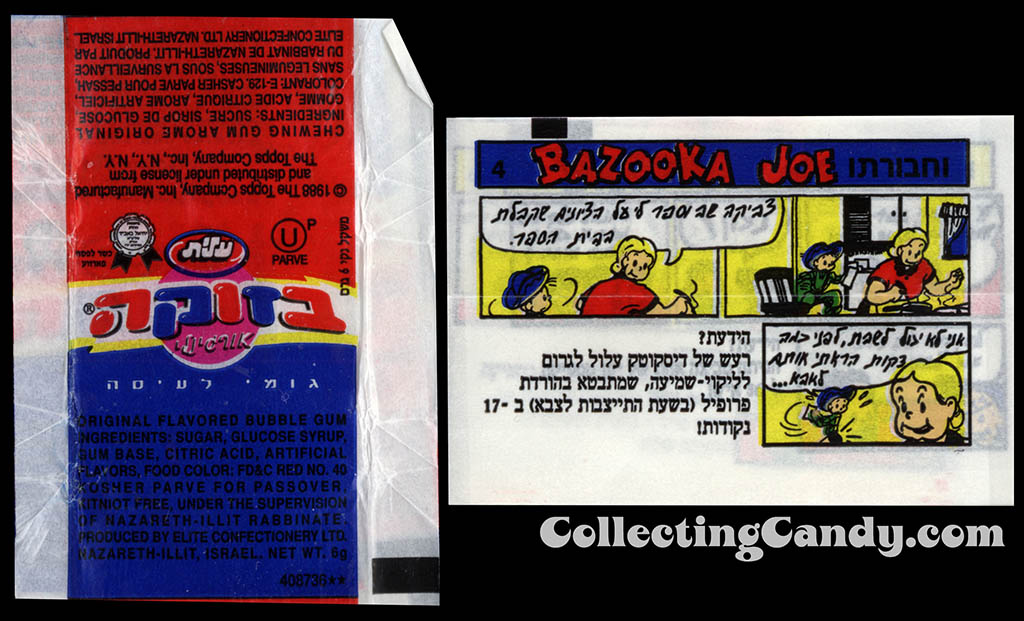 Heading back Stateside I want to take a look at the Paskesz Candy Company.  Though their history and origins trace back to Hungary before World War 2, the modern Paskesz was founded and remains based in Brooklyn, New York.  Today they are the leading kosher consumer product company with an impressive variety of products available.

The earliest Paskesz piece in my collection dates back to the mid-1970’s.  I believe this was their kosher version of a Now & Later candy: 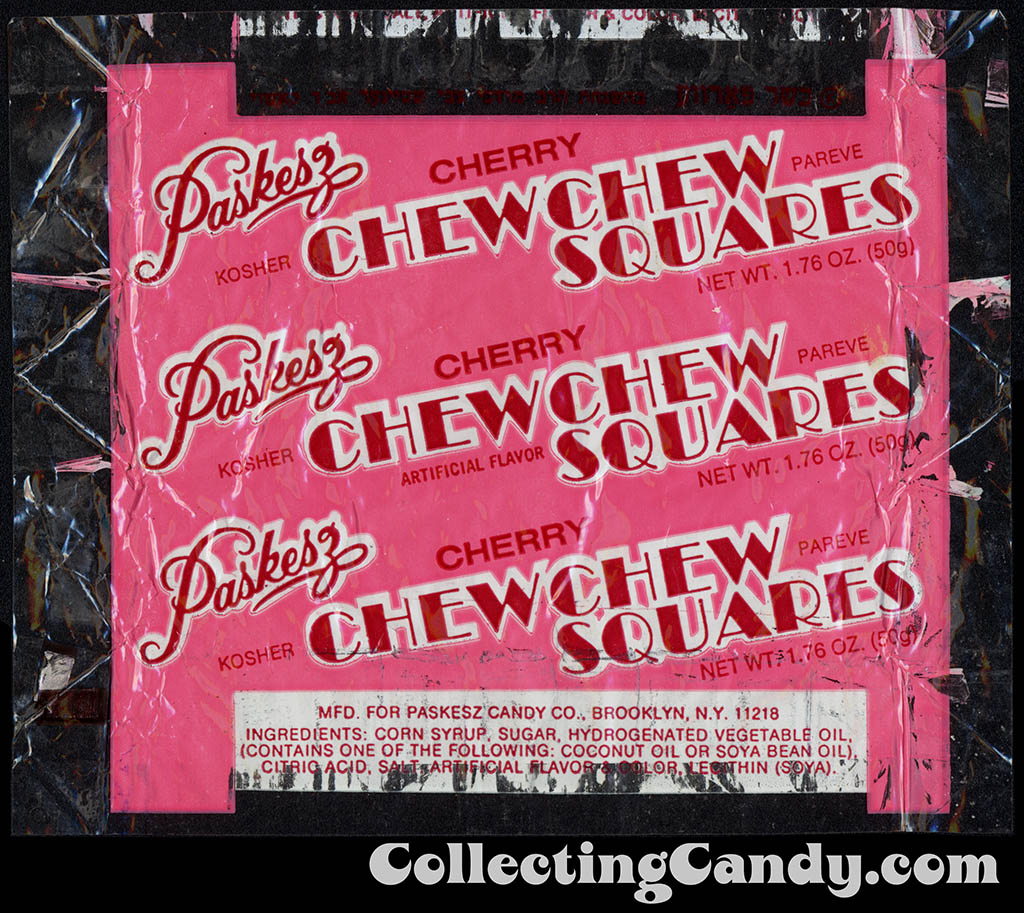 Here’s a side-by-side look at Paskesz’ Chew Chew Squares next to a similar Now & Later package from the same era:

It’s clear to me that producing kosher versions of popular consumer edibles was a big factor in Paskesz’ success and popularity.  It just makes sense that they would work to fill this significant market niche.

Here’s an example of a 1970’s wrapper for a Paskesz Peanut Chews bar: 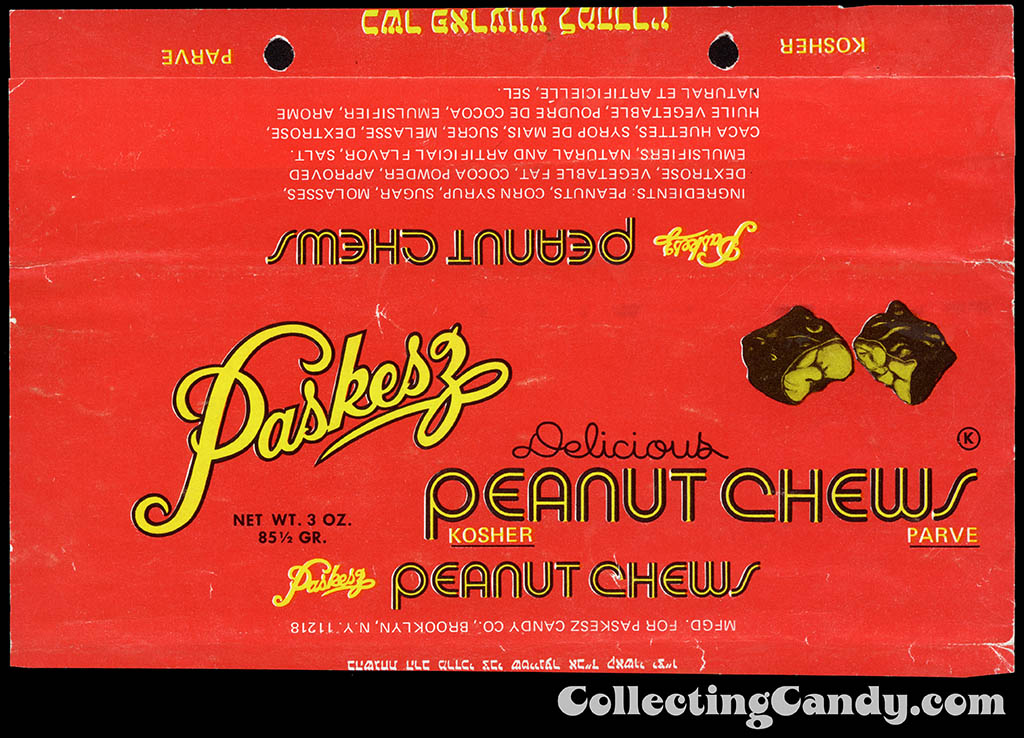 Jumping from the 1970’s to today, Paskesz now offers a wonderfully-packaged line-up of sour candy treats.  Here are a few I’ve picked up: 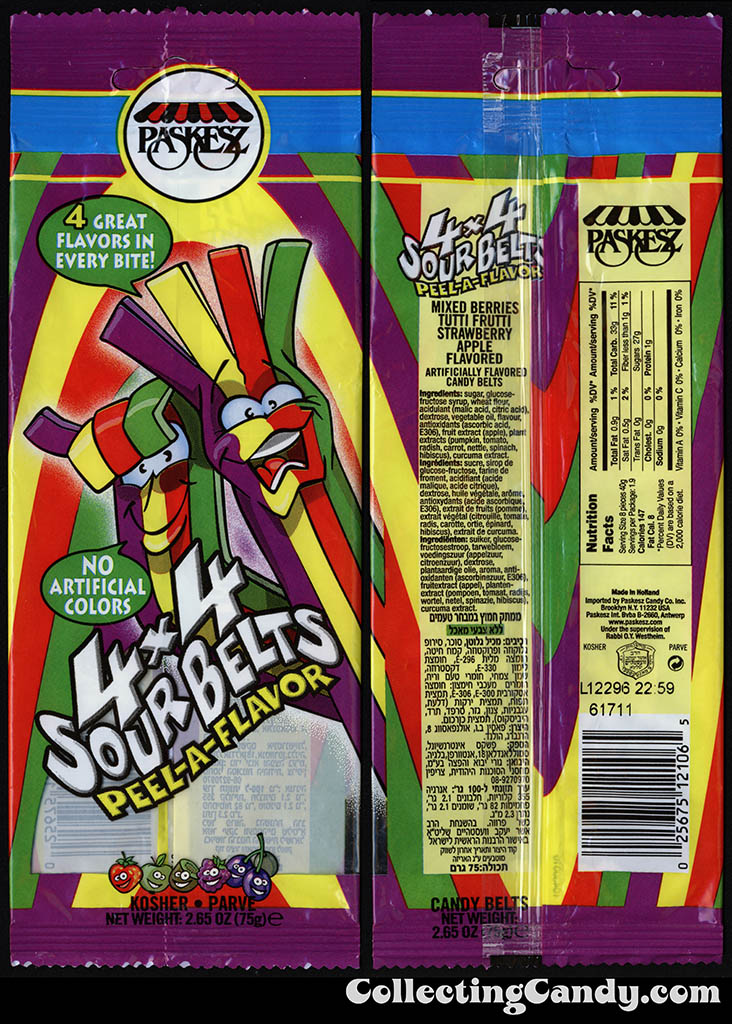 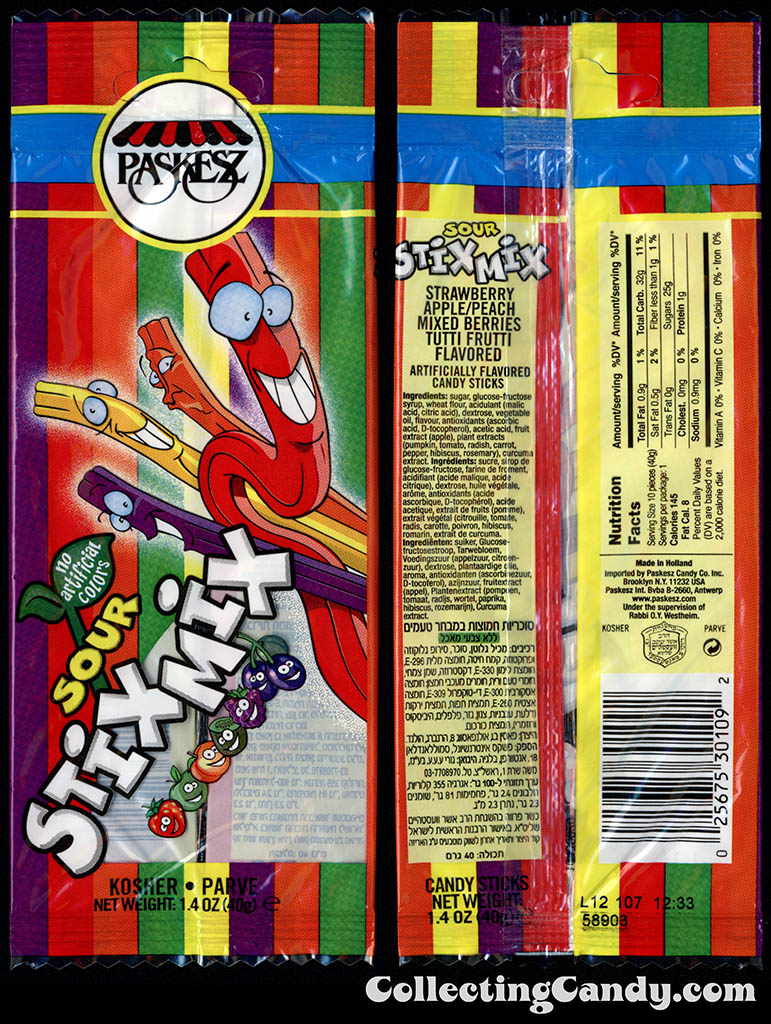 Next up are what I believe are kosher versions of Dorval’s Sour Power Straws.  I didn’t find the Dorval name on the Paskesz versions, but when the word “sour” in the logo is exactly the same as the Dorval version and the mascots are so similar, it’s hard to not make the connection: 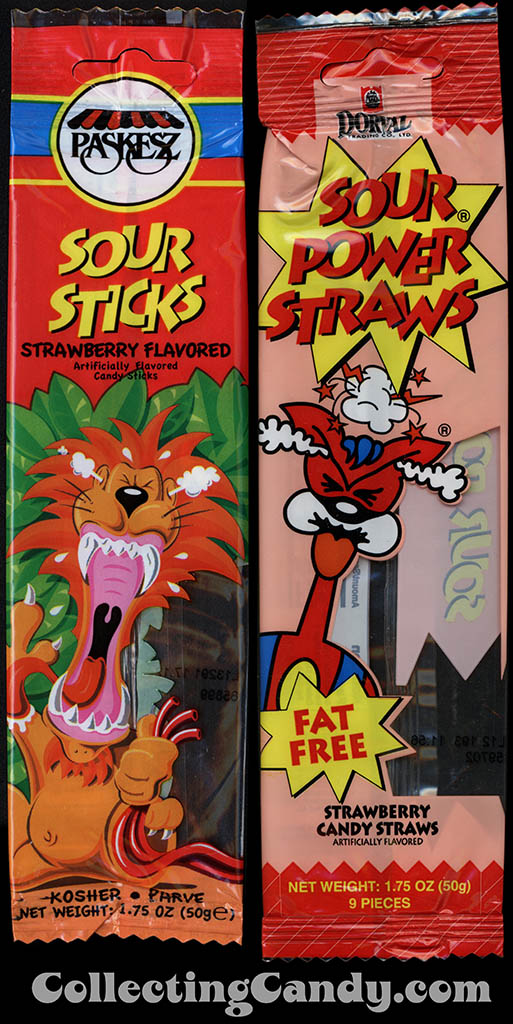 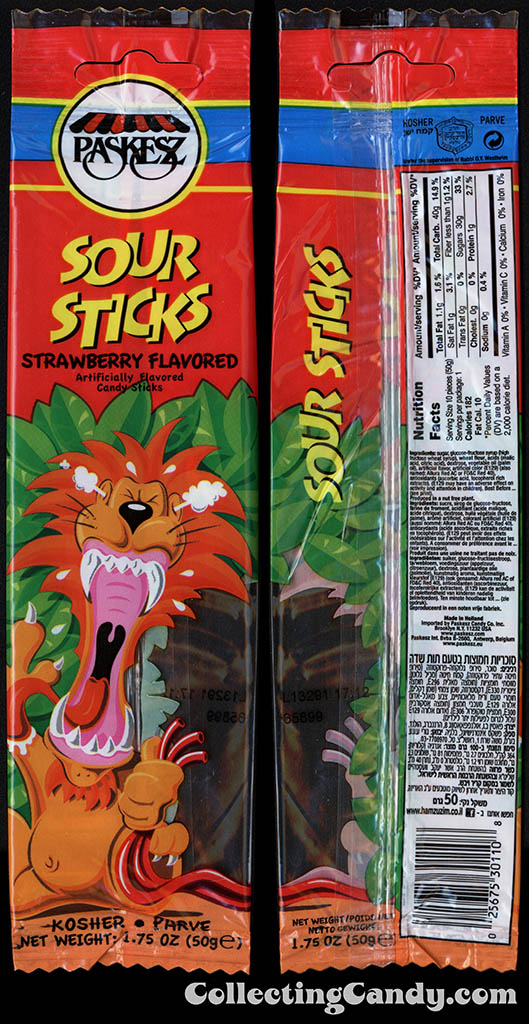 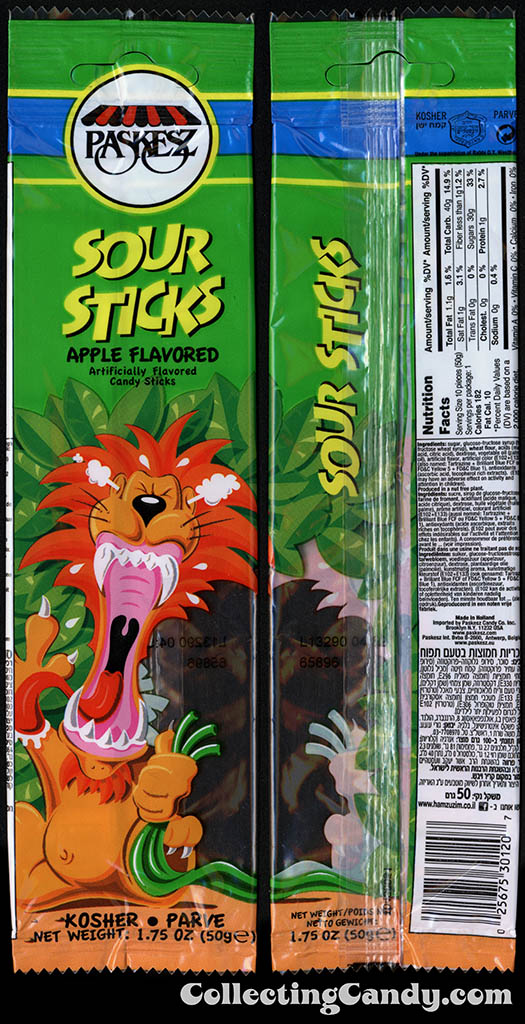 Finally, I’d like to wrap up with two items that have come out of a Paskesz partnership with Haribo.  In this case, rather than come up with a unique kosher version of the Haribo products, they’ve instead co-branded – and I think that makes these packages especially cool: 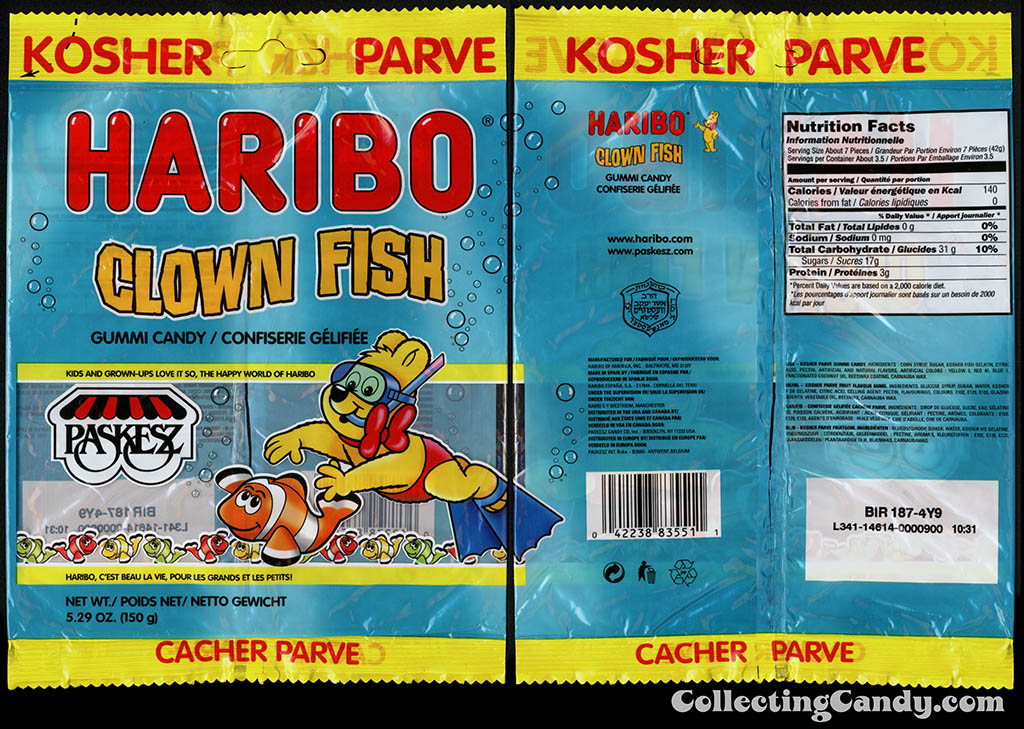 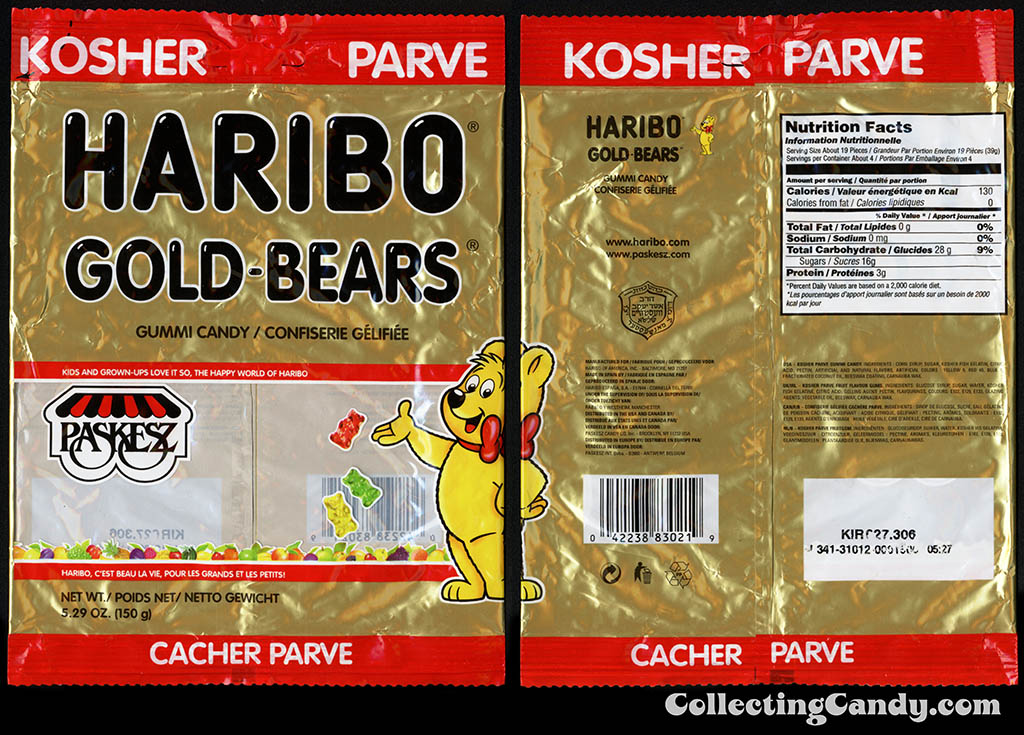 That’s everything I’ve got to share for today.  To all of my Jewish friends and visitors, I hope you have a Happy Hanukkah.  See you next time!

A New York City based writer, editor and sometimes actor. After spending much of the 1990′s in the comic book business helping tell the stories of Marvel Comics’ X-Men as series editor, he has since split his time between developing his own entertainment properties while still consulting and working on others. Having been described as “the Indiana Jones of lost and forgotten candy”, Jason is one of the country’s premier candy collectors and historians with his discoveries appearing in countless blogs, magazines, newspaper articles, and books. Always happy to share his knowledge and unique perspectives on this colorful part of our popular culture, Jason has consulted with New York’s Museum of Food and Drink and has also been a featured guest on Food Network’s Heavyweights, France’s M6 Capital, and New York’s TheActionRoom.com. My Google Profile+
View all posts by Jason Liebig →
This entry was posted in 1970's, Chocolate, Gummies, Holiday, Sour Candy, Uncategorized and tagged candy collecting, candy collection, candy collector, candy wrapper collection, candy wrapper collector, Chanukah, collectible, collecting candy, confectionery, confections, Hanaka, Hanukkah, holiday, Jewish, kosher, menorah, packaging, packaging design, sweets, vintage candy wrappers, wrapper. Bookmark the permalink.

1 Response to Happy Hanukkah With Paskesz Kosher Candy and More!