New for 2015: Halloween Chocolate Bars from Astor and Hammond’s!

Every year, the Halloween season sees the big guys delivering all manner of specially-branded items or repackaged editions of their main line products , but today I thought I’d look at a selection of seasonal releases from a pair of lesser-known but still well-established candy makers: Astor Chocolate and Hammond’s.   Make the jump to check them out!

First up is a pair of Halloween-themed bars from Astor Chocolate.  Astor Chocolate are known for their souvenir bars, as you’re likely to find their name on some of the “I Love NY” bars sold in Times Square and any number of other local attractions around the country.  I’ve never actually encountered the Astor name on holiday-themed bars like this, so I immediately grabbed them when I saw them at a Michael’s craft store location.  I thought the designs on these two were pretty great and deserved to be highlighted: 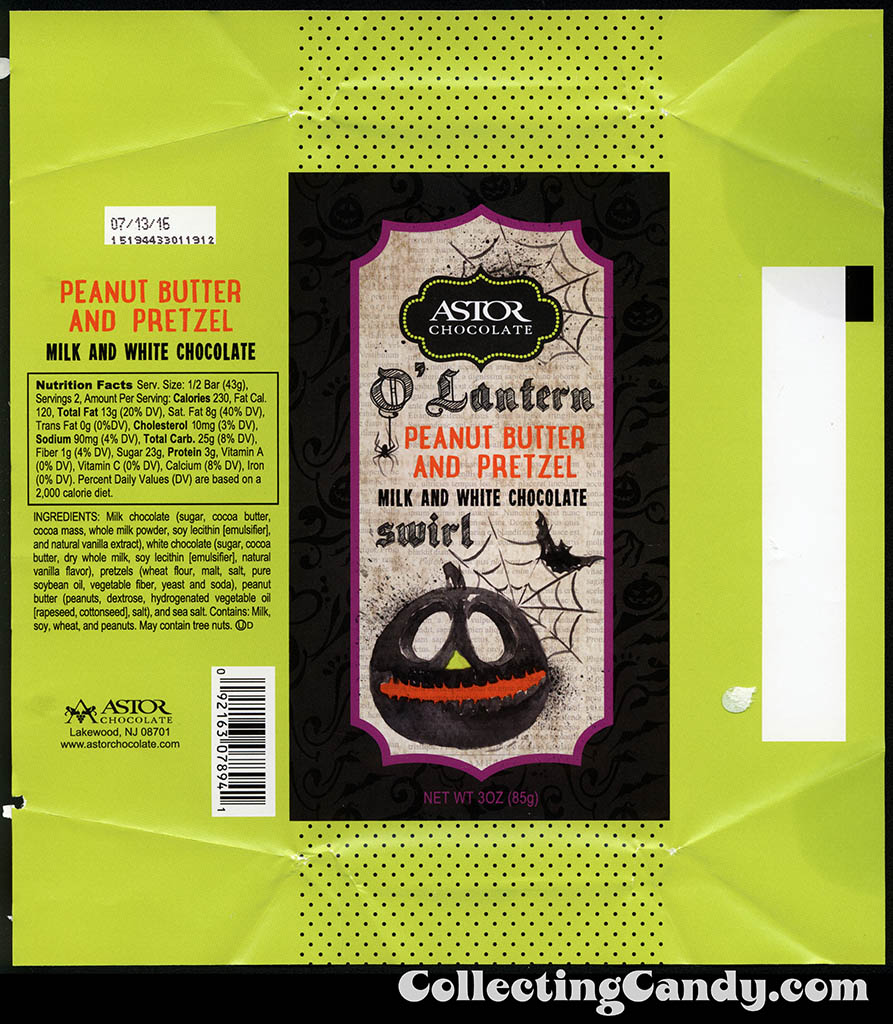 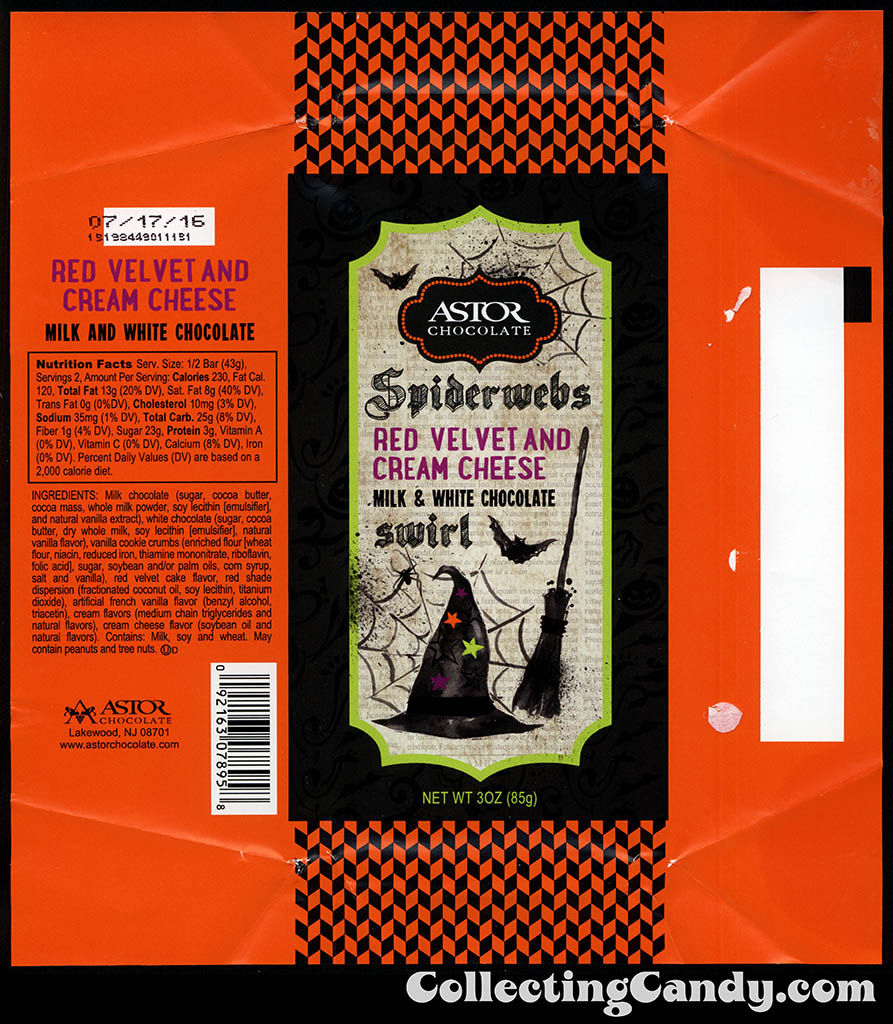 The bars themselves are pretty amazing, each one a half milk chocolate/white chocolate mix, swirled together.  They’re as pretty as they are tasty! 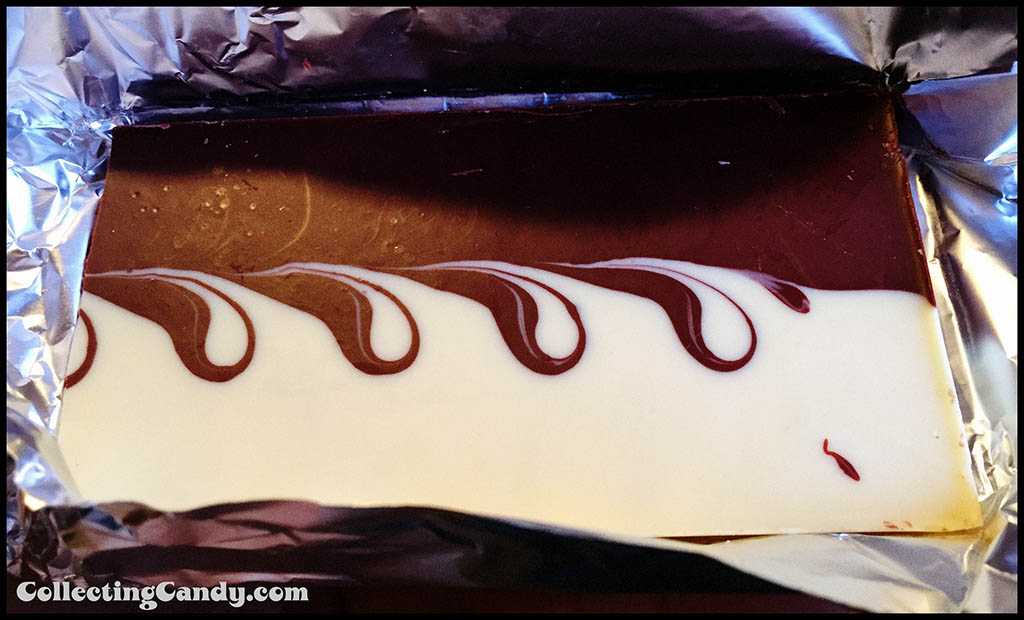 Next up are the wrappers for a trio of Halloween-themed chocolate bars I only found at Target this season, and my guess is that these are a Target store exclusive, although I can’t be certain.  Produced by Hammond’s Candies of Denver, Colorado, a company that’s been around since the 1920’s, they’ve begun to significantly expand their distribution in recent years.  I think this trio of Halloween bars is great evidence of the brand’s growth. 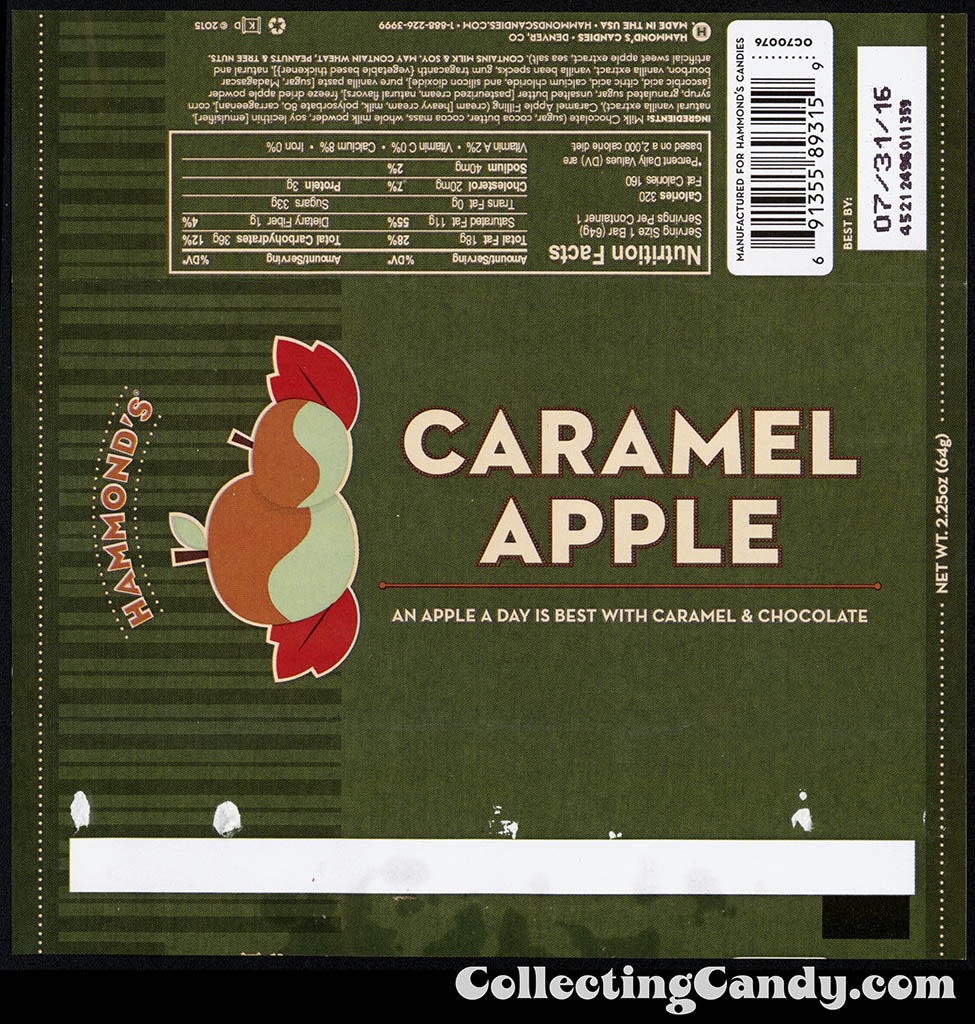 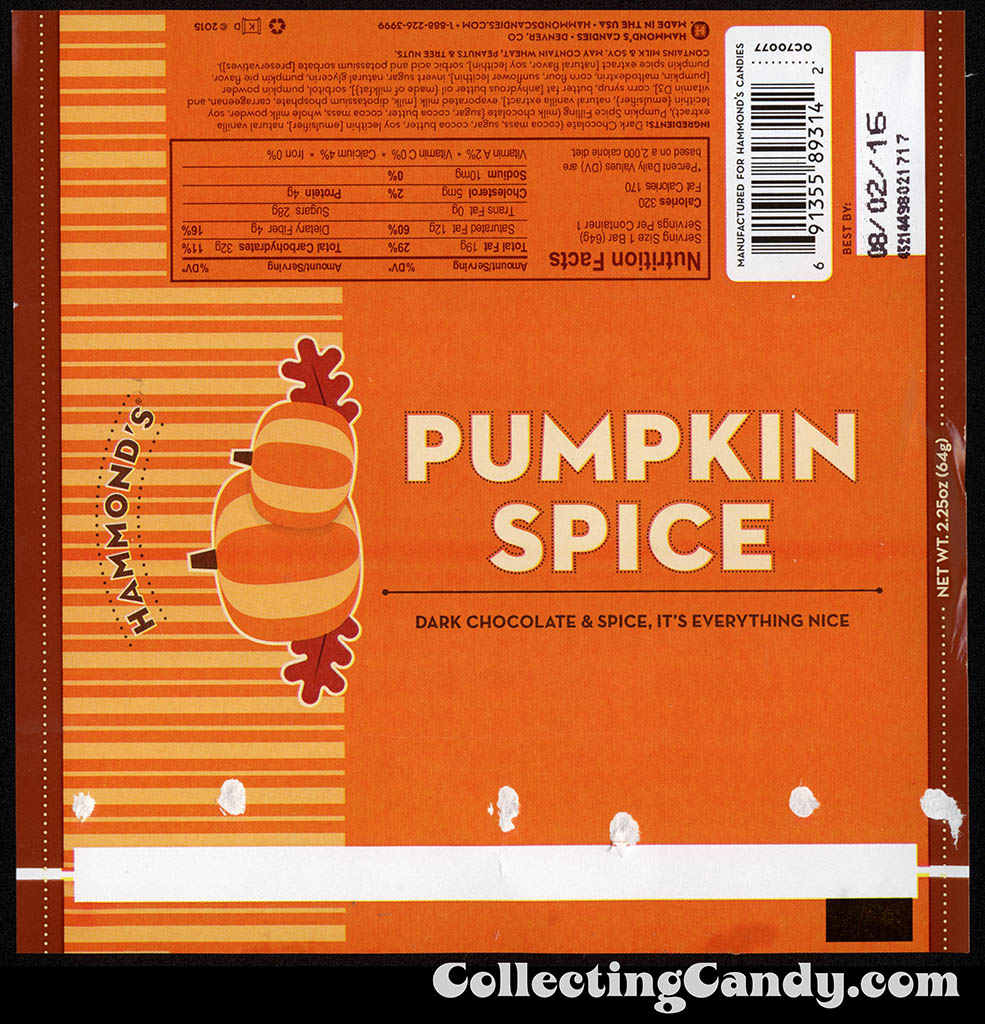 And finally, here’s one I forgot to mention during my Russell Stover Billion Dollar Halloween bars post earlier in the countdown; a Pumpkin Spice Latte bar (which may have also been a Target exclusive this year since I’ve only found them there). 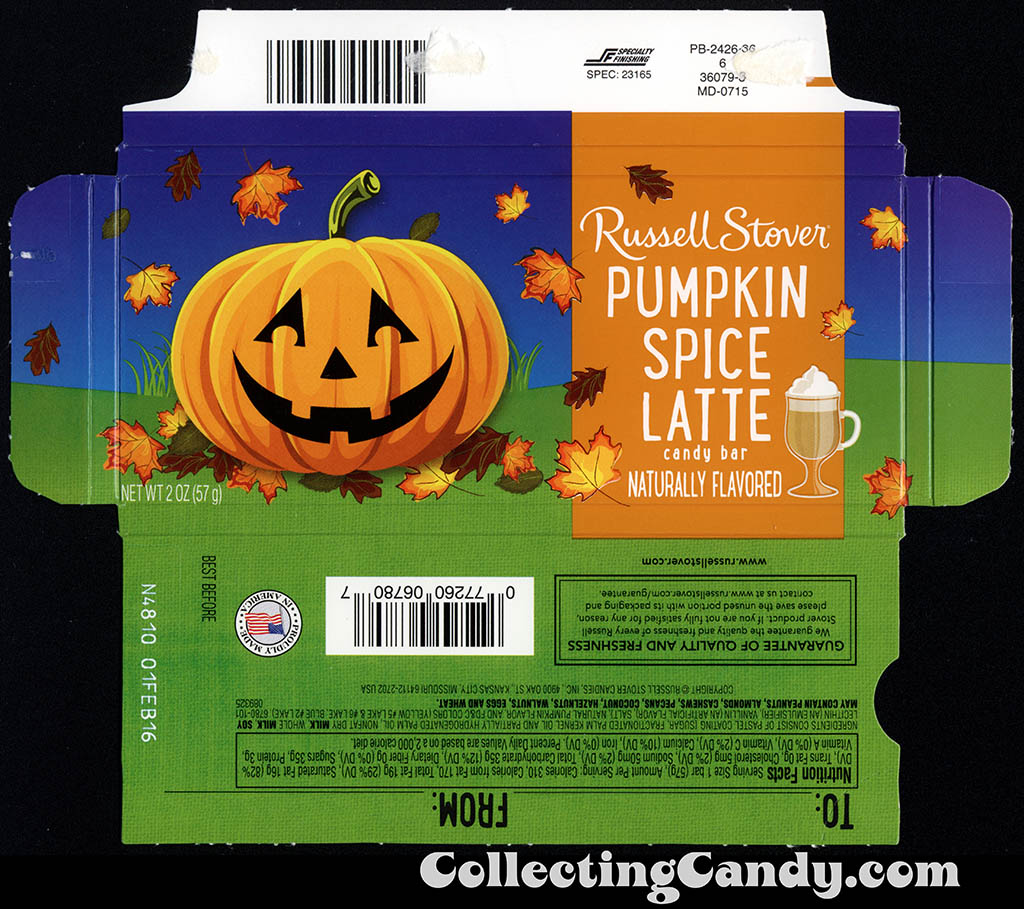 And that’s everything I’ve got to share on these less-mainstream, yet tasty and fun new chocolate bar releases for the 2015 Halloween season.  See you next time! 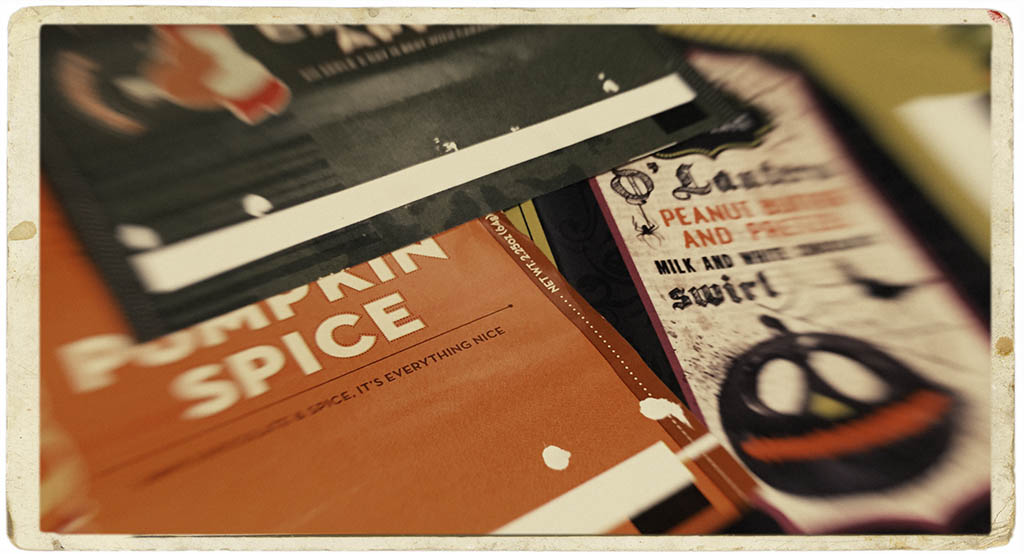 A New York City based writer, editor and sometimes actor. After spending much of the 1990′s in the comic book business helping tell the stories of Marvel Comics’ X-Men as series editor, he has since split his time between developing his own entertainment properties while still consulting and working on others. Having been described as “the Indiana Jones of lost and forgotten candy”, Jason is one of the country’s premier candy collectors and historians with his discoveries appearing in countless blogs, magazines, newspaper articles, and books. Always happy to share his knowledge and unique perspectives on this colorful part of our popular culture, Jason has consulted with New York’s Museum of Food and Drink and has also been a featured guest on Food Network’s Heavyweights, France’s M6 Capital, and New York’s TheActionRoom.com. My Google Profile+
View all posts by Jason Liebig →
This entry was posted in Chocolate, CountdownToHalloween, Halloween, Holiday and tagged candy collecting, candy collection, candy collector, candy wrapper collection, candy wrapper collector, collectible, collecting candy, confectionery, confections, Halloween, Halloween candy, packaging, packaging design, sweets, Target, Target exclusive, vintage candy wrappers, wrapper. Bookmark the permalink.

2 Responses to New for 2015: Halloween Chocolate Bars from Astor and Hammond’s!