For Halloween this year, Mars came up with a pair of terrific seasonal editions of two of their all-year-round products: 3 Musketeers and Snickers Xtreme, re-branding them as Muskefears and Snickers XScream.  These are two of my favorites from 2015’s new introductions, so make the jump to check them out!

I think it’s especially great when products get seasonal releases that play upon their existing names in clever ways.  Nestle-Canada did a great job of this back in 2012 with their Halloween ScAero bar and Coffin Crisp, and they also nailed it with their UK Queen Elizabeth Diamond Jubilee “Brit Kat” Kit Kat edition.   So when I heard that Mars was releasing a Halloween version of 3 Musketeers as “Muskefears”, I was sold.  Let’s check these out! 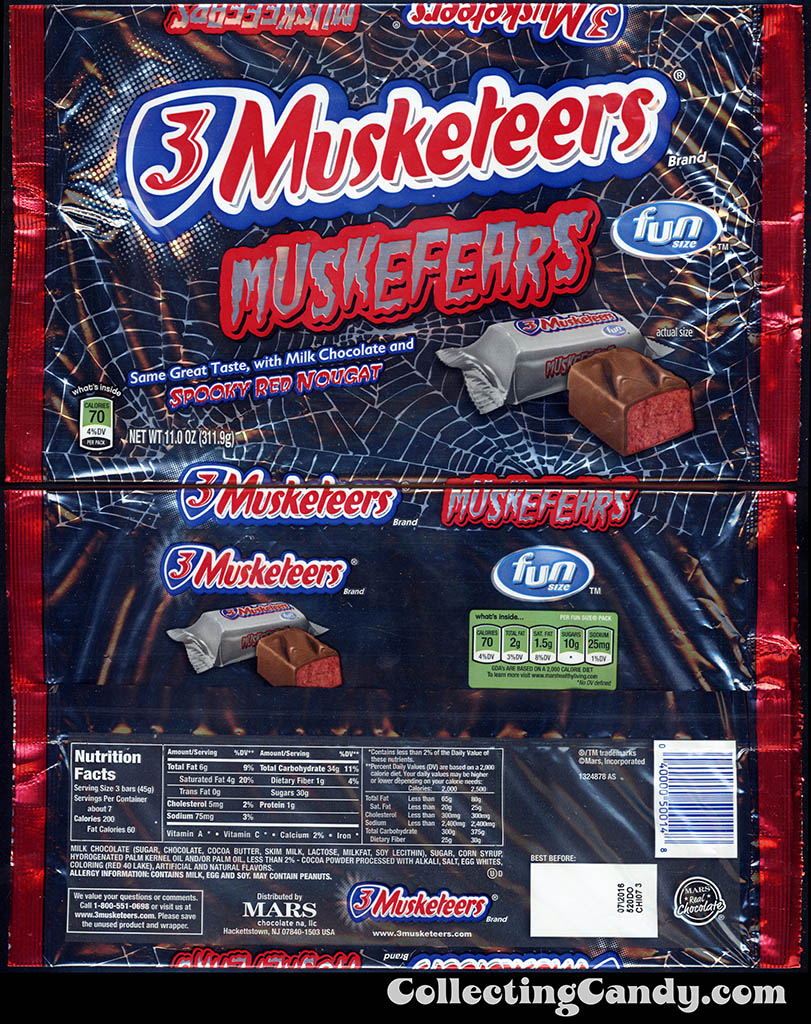 The outer packaging for Muskefears is a striking foil bag with graphical spider-web details.  It also has a nice cutaway image of one of the fun size bars, showcasing the novel feature of its Halloween-themed “Spooky Red Nougat”.  Pretty awesome.   The individual Fun Size wrappers also sport a foil look and the Muskefears name. 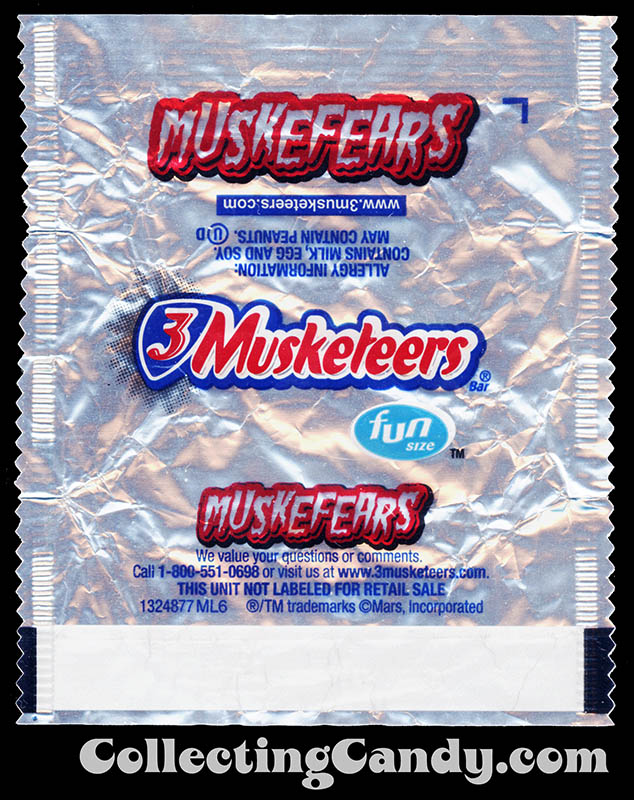 For Snickers XScream, no changes were made to the actual candy so this is an entirely package-based re-branding, but it’s an appealing one with a great ghost illustration on the large package as well as each individual Fun Size wrapper. 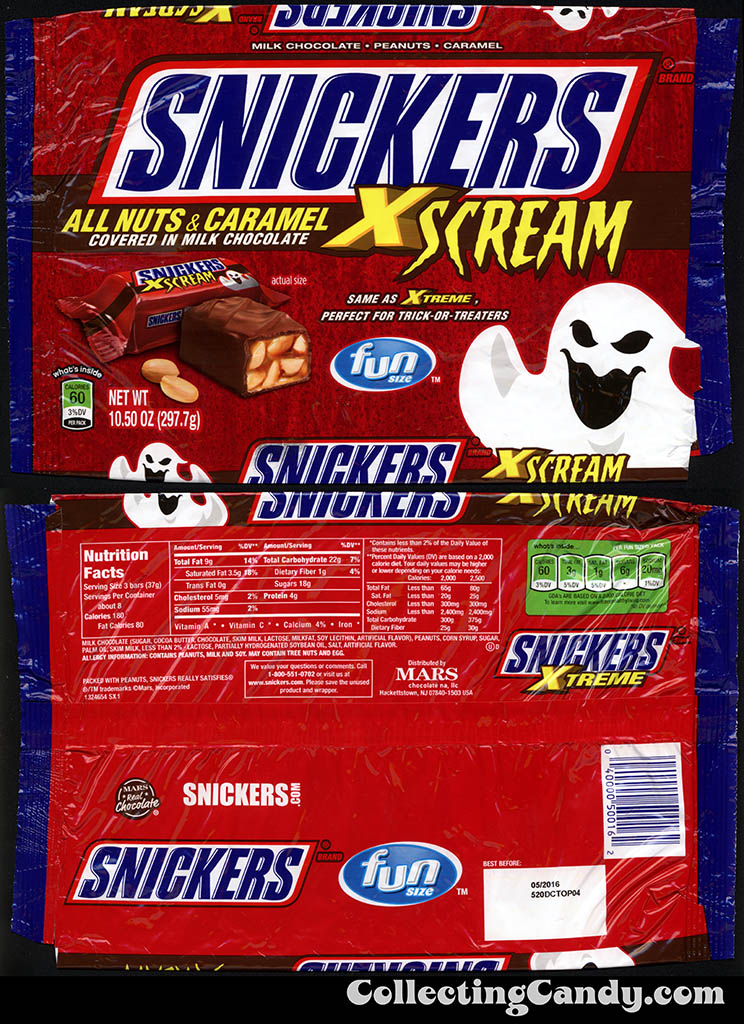 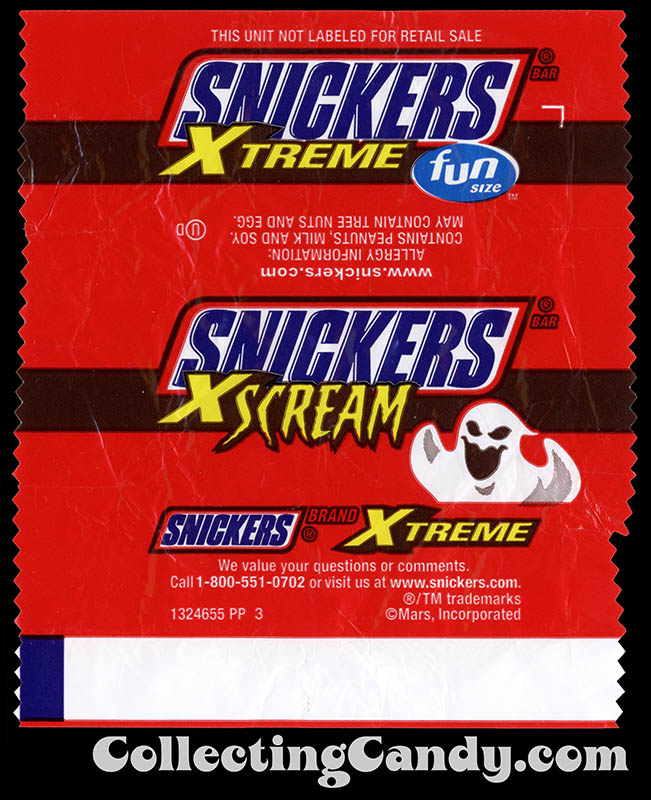 Great-looking stuff from Mars this year and it hearkens back to the fun Halloween edition Snickers Bites packaging I found last year (which I didn’t see around this season).

And that’s everything I’ve got to share on Mars’ Halloween Muskefears and Snickers XScream releases.  Hope you enjoyed seeing them and I’ll see you next time!

A New York City based writer, editor and sometimes actor. After spending much of the 1990′s in the comic book business helping tell the stories of Marvel Comics’ X-Men as series editor, he has since split his time between developing his own entertainment properties while still consulting and working on others. Having been described as “the Indiana Jones of lost and forgotten candy”, Jason is one of the country’s premier candy collectors and historians with his discoveries appearing in countless blogs, magazines, newspaper articles, and books. Always happy to share his knowledge and unique perspectives on this colorful part of our popular culture, Jason has consulted with New York’s Museum of Food and Drink and has also been a featured guest on Food Network’s Heavyweights, France’s M6 Capital, and New York’s TheActionRoom.com. My Google Profile+
View all posts by Jason Liebig →
This entry was posted in Chocolate, CountdownToHalloween, Halloween, Holiday, Mars and tagged candy collecting, candy collection, candy collector, candy wrapper collection, candy wrapper collector, collectible, collecting candy, confectionery, confections, ghosts, Halloween, Halloween candy, packaging, packaging design, seasonal, Snickers, sweets, vintage candy wrappers, wrapper. Bookmark the permalink.

4 Responses to New for 2015: Mars’ Halloween Muskefears and Snickers XScream!