As Jurassic World continues its weeks-long Summer box office domination, I thought it would be fun to revisit some dinosaur-themed confectionery treats from the past.   Most kids delight in dinosaurs and many (myself included) even go through a phase of dinosaur infatuation at some point.  So it was a stroke of jawbreaker-marketing genius when the folks at Willy Wonka Brands introduced their DinaSour Eggs to the marketplace.  Make the jump to check out this delightfully-classic 1980’s treat!

DinaSour Eggs were first announced to the candy trade in the spring of 1981 via an ad that highlighted their packaging, their unique spot as the only “giant sour jawbreaker” in the marketplace, as well as the fact that each egg would last between 30-60 minutes.  That ad featured none other than the real-life Willy Wonka himself, Mark Sweet – and here it is: 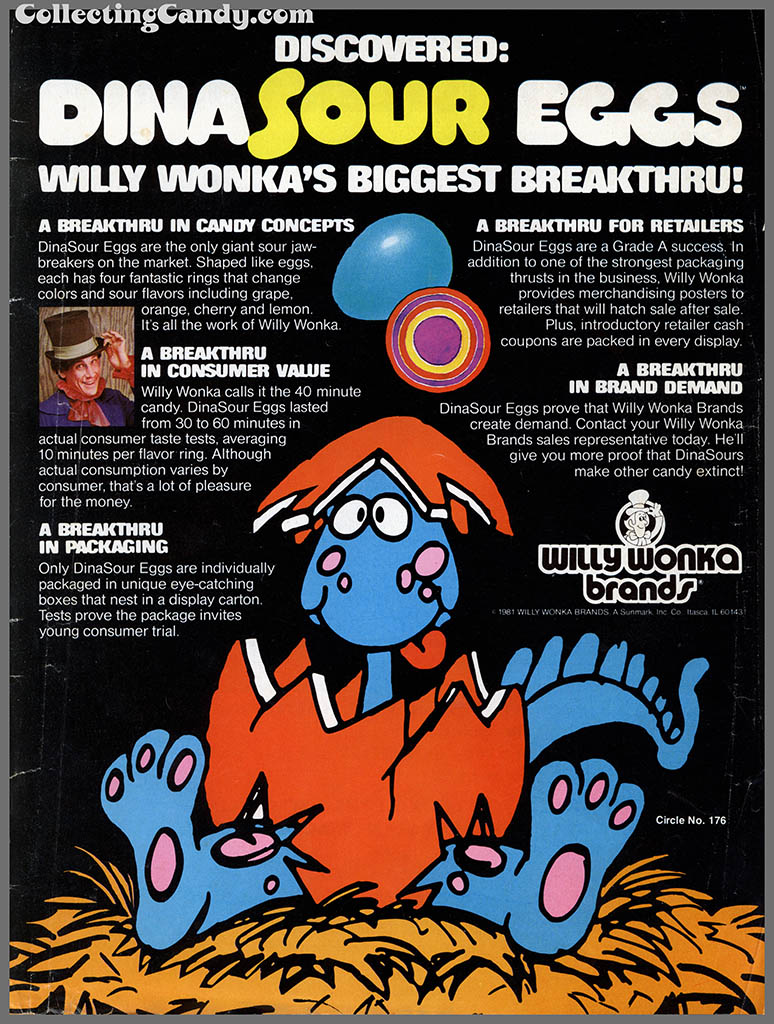 Initially, DinaSour Eggs were offered in two different packages – containing either one of the giant sour egg-shaped jawbreakers, or two. 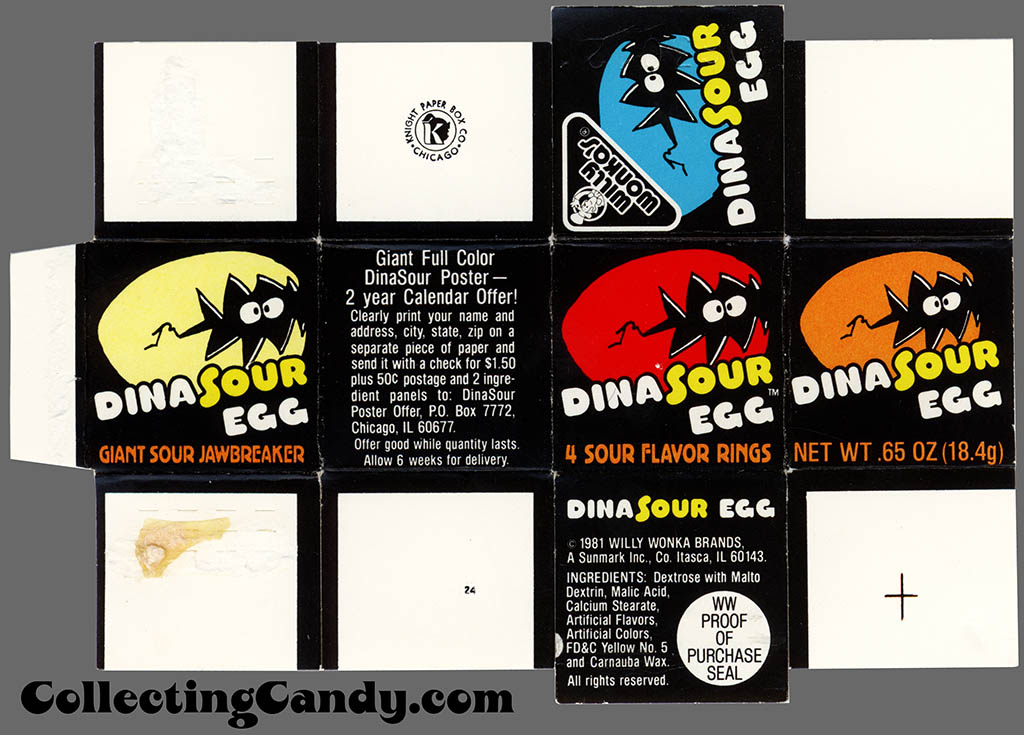 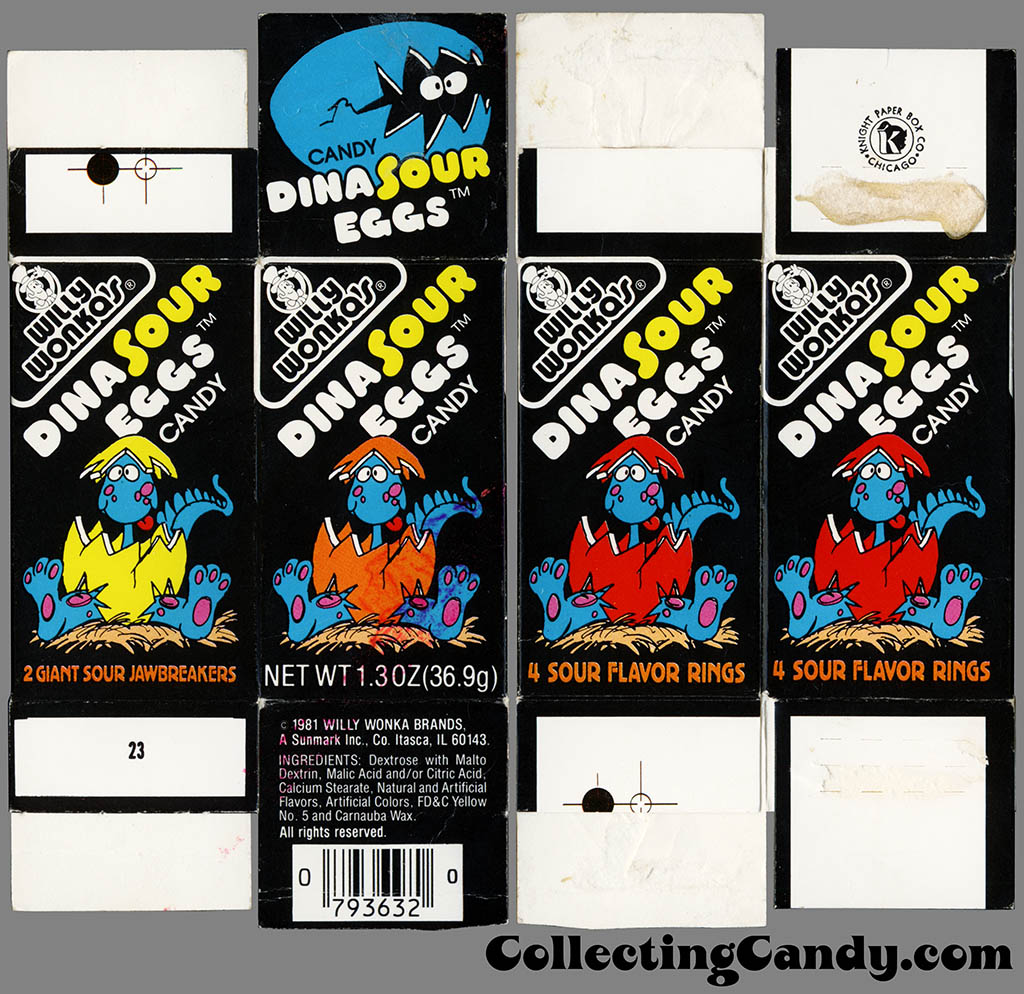 The single DinaSour Egg box featured a mail-away offer for a “Giant DinaSour Poster/Calender”.   I have one in my archives and it was pretty big, coming in at a good 24″ x 36″ poster size: 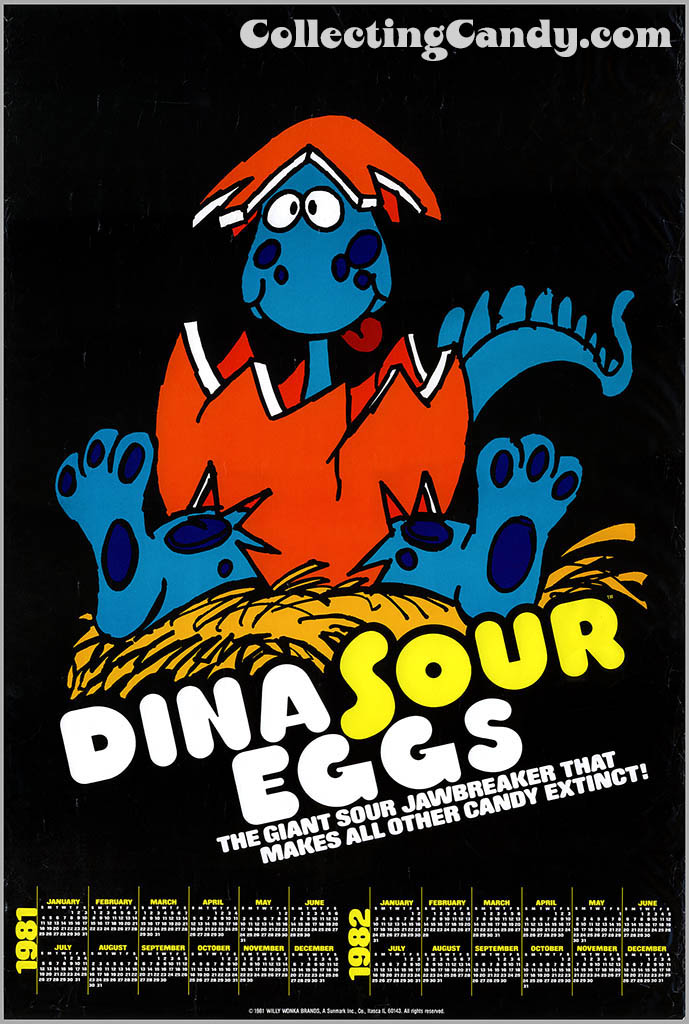 Though the dinosaur mascot found on those original DinaSour Egg packages is not named on them, like so many other Wonka characters, she was given a name on a sticker sheet found in the Willy Wonka Fun Club Kit – she’s “Dee Dee DinaSour”: 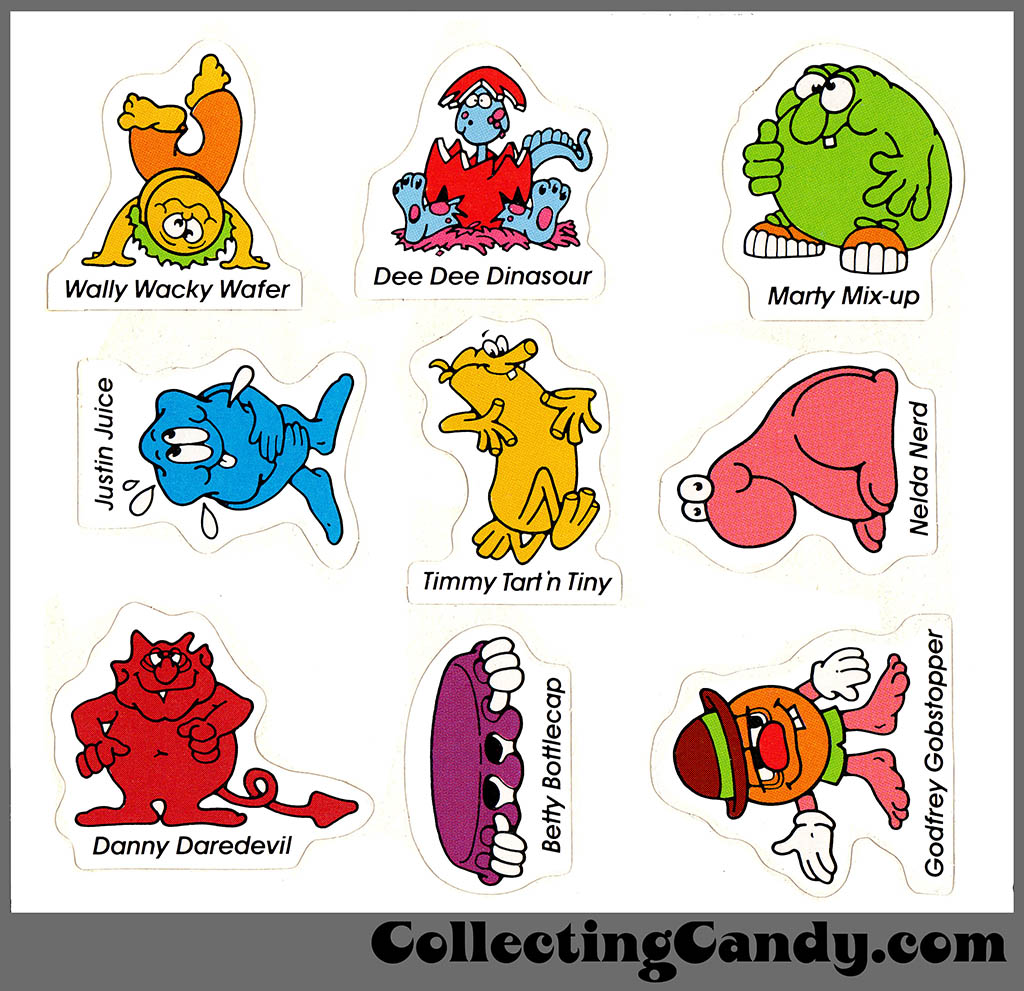 Sometime during the 1980’s, Willy Wonka brands decided to move away from “giant” jawbreakers.  The decade would see their original giant-size Gobstoppers and DinaSour Eggs supplanted by their mini offspring.  By 1987, DinaSour Eggs were no longer referred to as giant jawbreakers on their packaging and it’s clear by the size of the box panels that the candy’s dimensions had shrunk.

Here are two DinaSour Eggs boxes from 1987 that featured a dinosaur quiz and collectible dinosaur cards:

This one is deconstructed to view the dinosaur card inside: 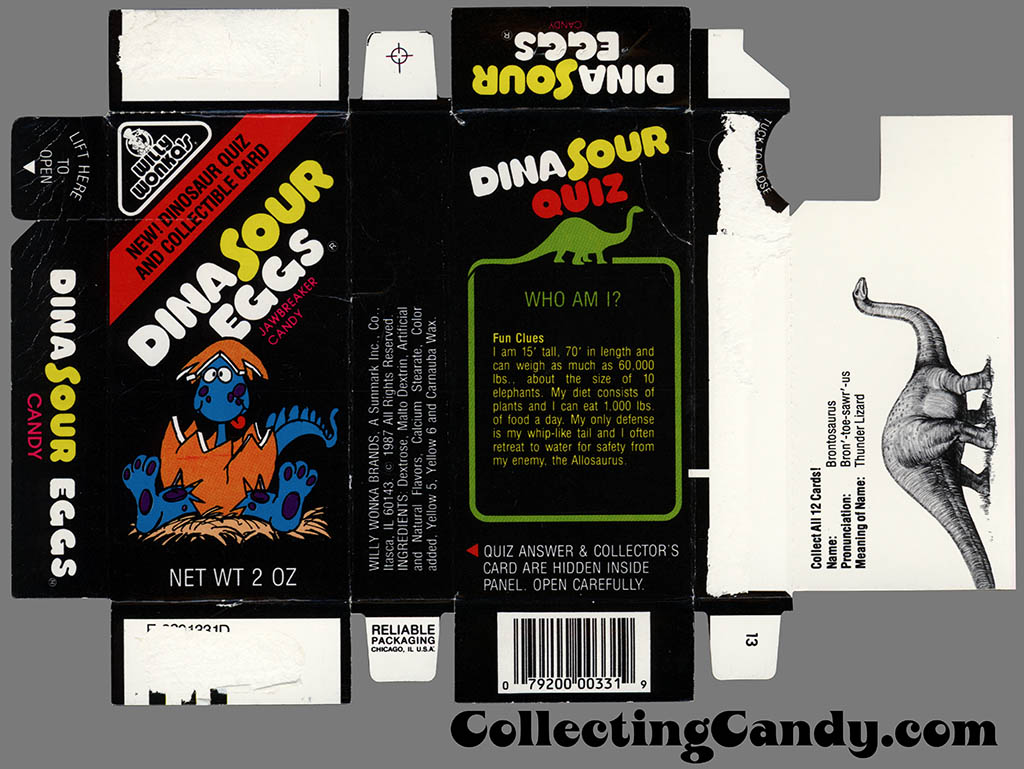 DinaSour Eggs lasted through the entirety of the 1980’s decade and even managed to survive into the 1990’s.  The latest confirmed evidence of their survival comes in the form of a long-box style package for them, dated from 1992: 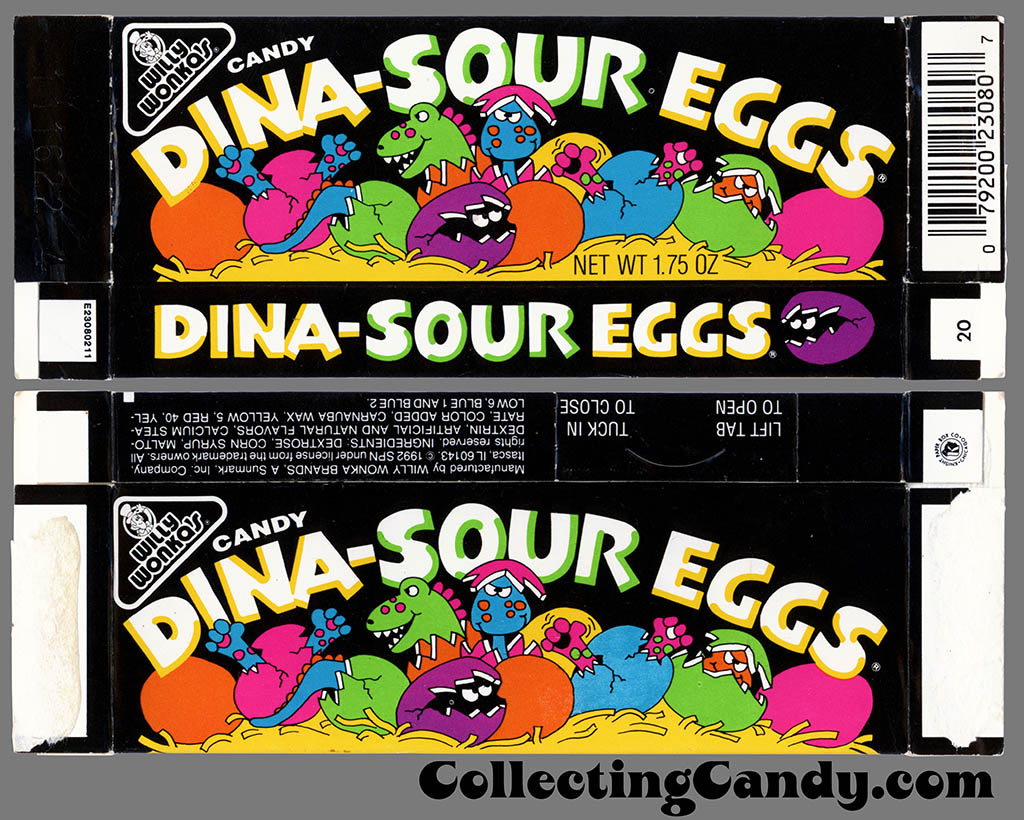 Without any further evidence to draw upon, I’d estimate that Willy Wonka’s DinaSour Eggs were likely extinct from store shelves by the mid-1990’s.  And while they may have become another fossil of our shared confectionery past they stand as a 1980’s classic that will be warmly remembered for many years to come.

And that’s everything I’ve got on Willy Wonka’s classic DinaSour Eggs.  See you next time!

A New York City based writer, editor and sometimes actor. After spending much of the 1990′s in the comic book business helping tell the stories of Marvel Comics’ X-Men as series editor, he has since split his time between developing his own entertainment properties while still consulting and working on others. Having been described as “the Indiana Jones of lost and forgotten candy”, Jason is one of the country’s premier candy collectors and historians with his discoveries appearing in countless blogs, magazines, newspaper articles, and books. Always happy to share his knowledge and unique perspectives on this colorful part of our popular culture, Jason has consulted with New York’s Museum of Food and Drink and has also been a featured guest on Food Network’s Heavyweights, France’s M6 Capital, and New York’s TheActionRoom.com. My Google Profile+
View all posts by Jason Liebig →
This entry was posted in 1980's, Boxed, Hard Candy, Wonka and tagged 1980's, 80's, 80's candy, 80's Wonka, candy collecting, candy collection, candy collector, candy wrapper collection, candy wrapper collector, collectible, collecting candy, confectionery, confections, dinosaur, packaging, packaging design, sweets, vintage candy wrappers, Willy Wonka, Wonka, wrapper. Bookmark the permalink.