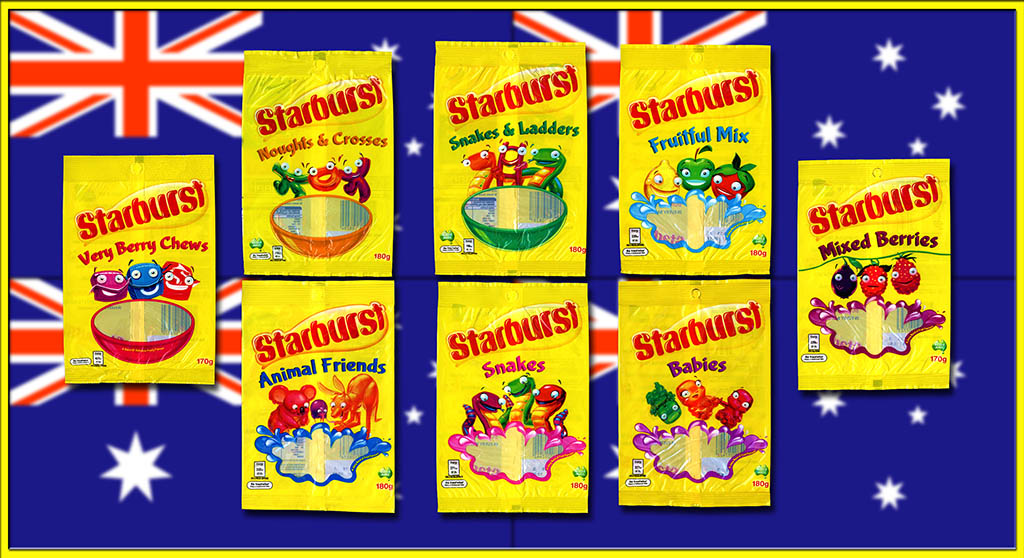 As a candy enthusiast, historian and collector, I love finding unusual product or flavor extensions of candy brands I already know well.  There’s just something especially compelling about that familiar logo matched up with unfamiliar elements that makes up a new brand extension – it’s fun!  Sometimes those extensions can take the form of a particularly jarring oddity and other times they can make perfect sense.  Today’s post covers a great example of the latter as it seems to be a natural evolution for the Starburst brand name to cover a family of fruit-flavored gummies.  And that’s just what’s being done Down Under in the Australian (and New Zealand) markets.  So make the jump to check out Australia’s Starburst Gummies!

Before I begin, I’d like to shout out and thank fellow collector and New Zealand native Steve Williams.  Steve’s been a great friend to CollectingCandy.com and over the years has provided me with so many treats you can only find in the New Zealand and Australian territories.

While the Starburst brand in the United States is typically relegated to its original fruit chew format, it has also become a successful seasonal jelly bean item.  But to my knowledge, we’ve never had a Starburst-branded gummi here.  It’s nearly the opposite in Australia, where you can find a solid lineup of colorful and fanciful Starburst gummies for sale.  The first time I encountered them was just a few years ago, in the form of “Starburst Snakes”: 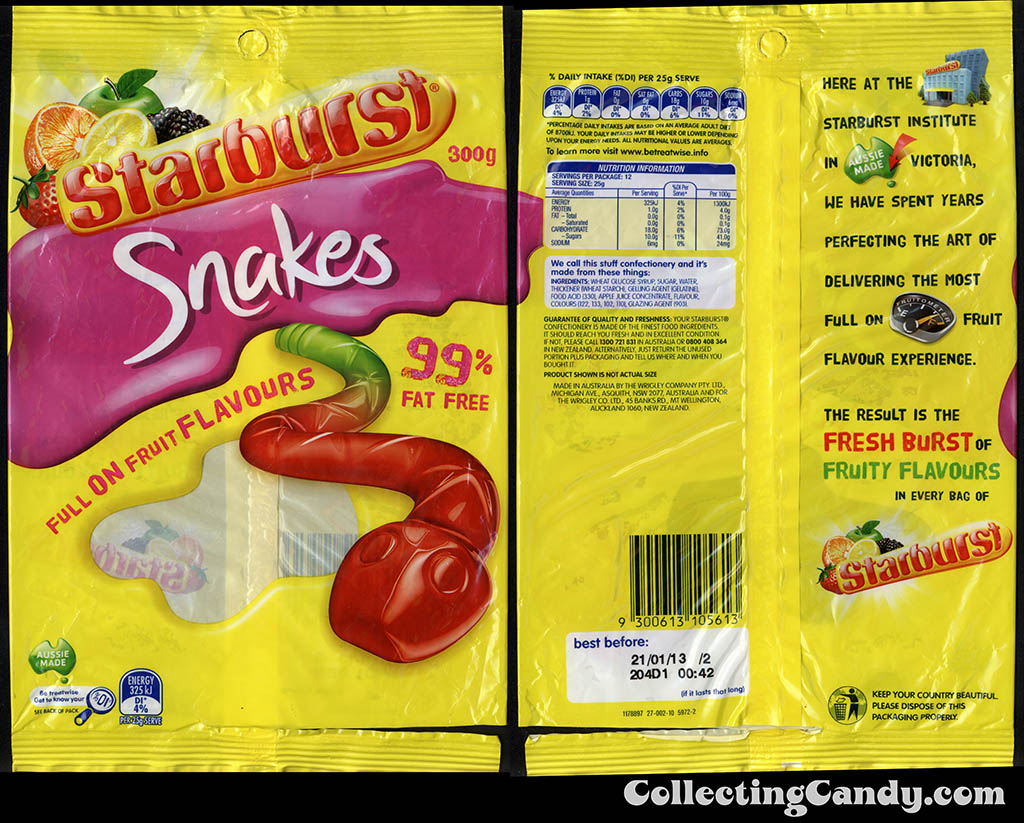 Not long after I added that first Snakes piece to my collection, Starburst Gummies packaging got a bit of a facelift as well as an expansion into other shapes and themes.  I’ve managed to pick up most of what’s followed from the line and I’m excited to share them today.

First up is an updated Snakes package, featuring a more mascot-friendly illustrated version of the confectionery creatures: 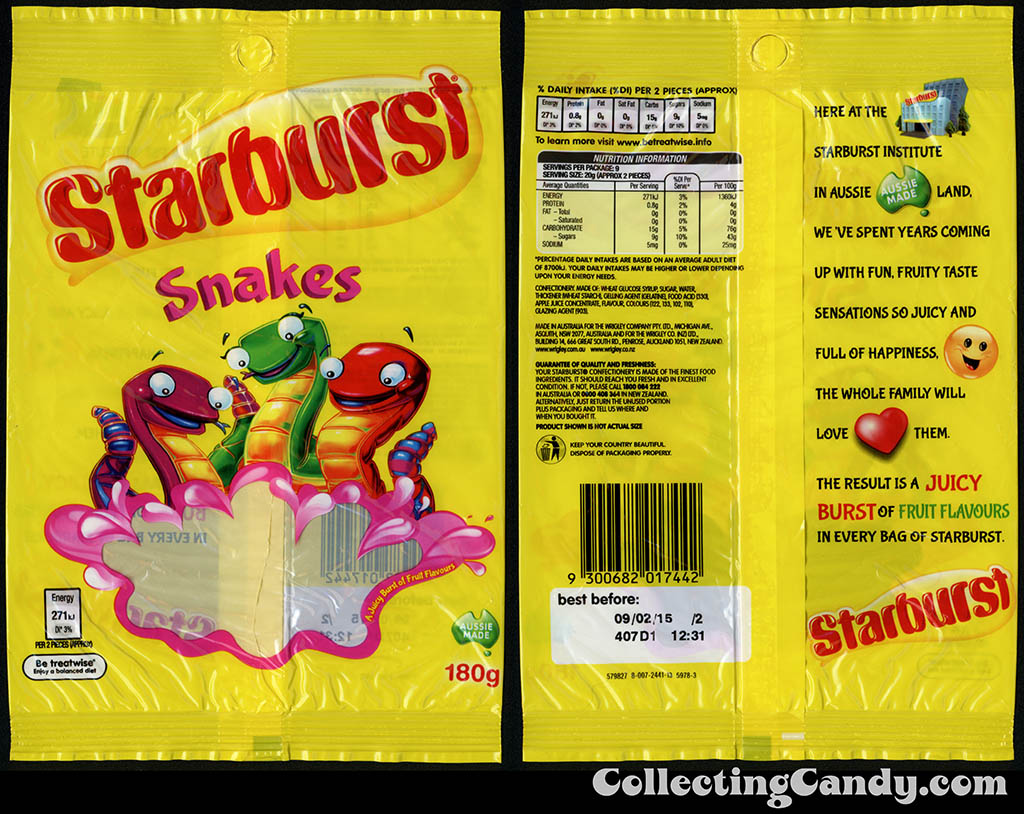 And now take a look at some of the other gummi shapes they’ve released under the Starburst umbrella.  This Animal Friends package is great as it includes some wildlife trivia on the back of the pack: 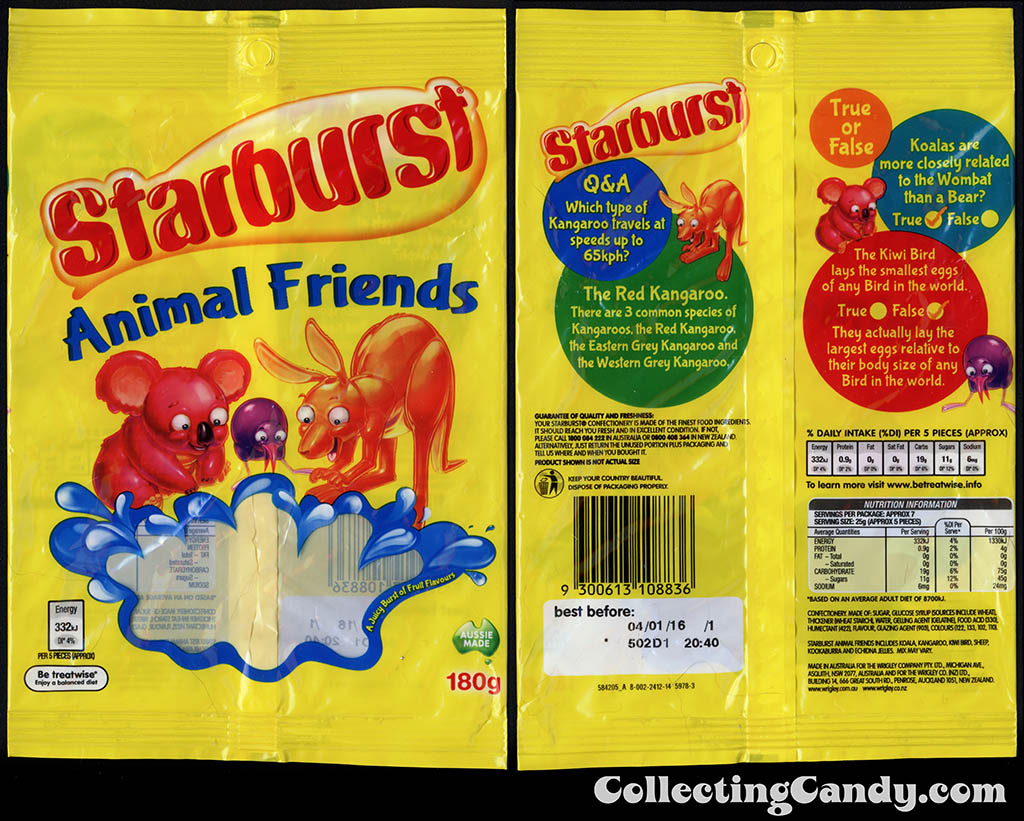 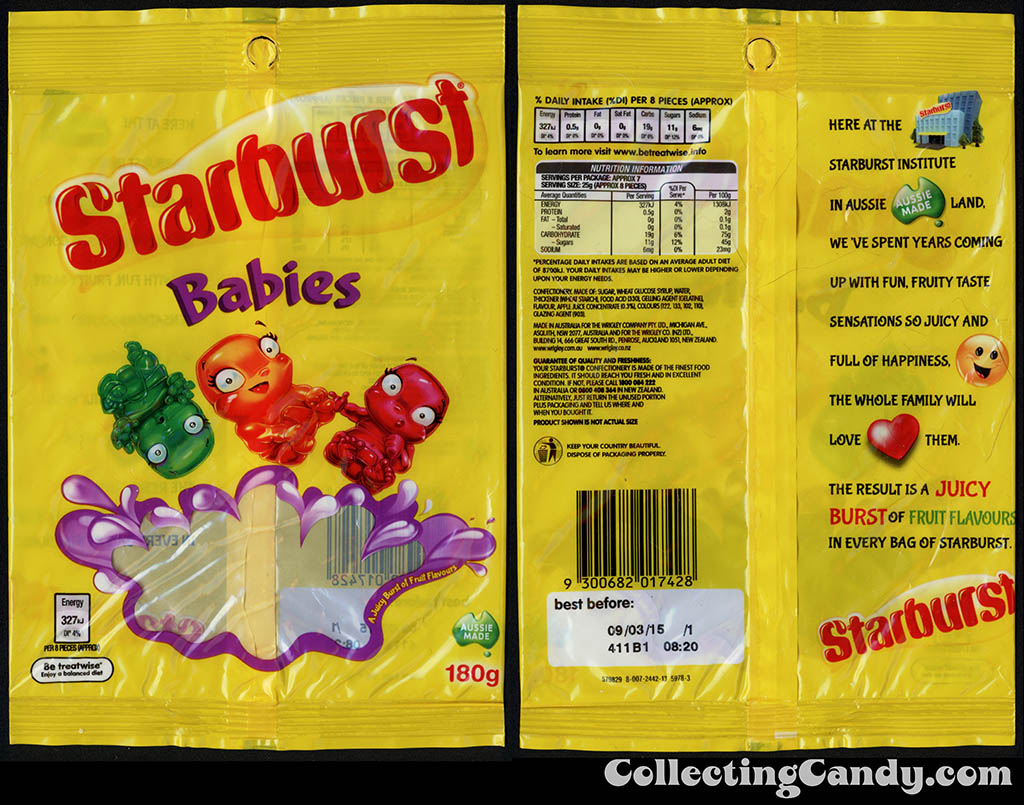 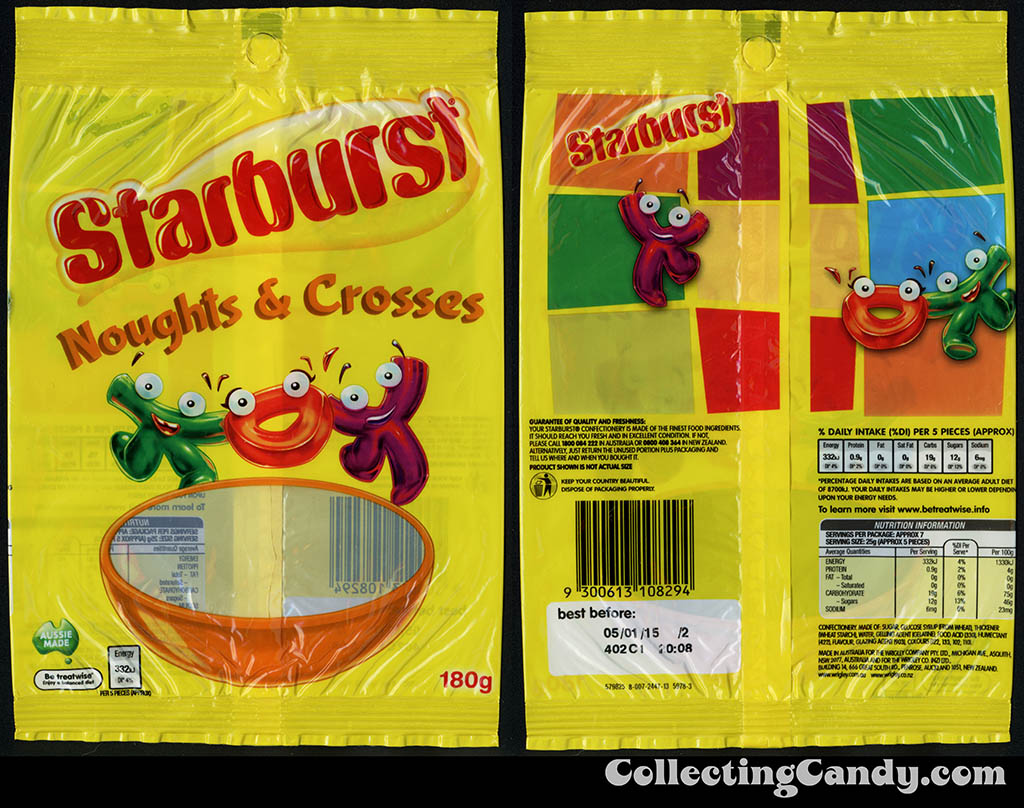 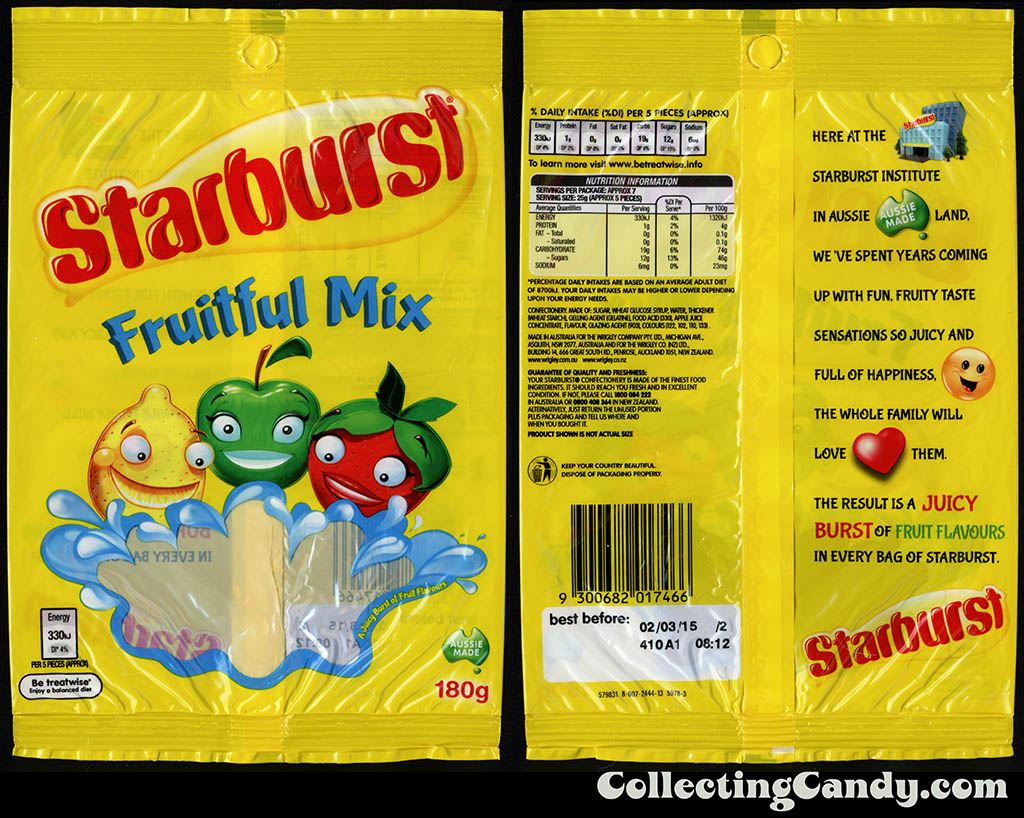 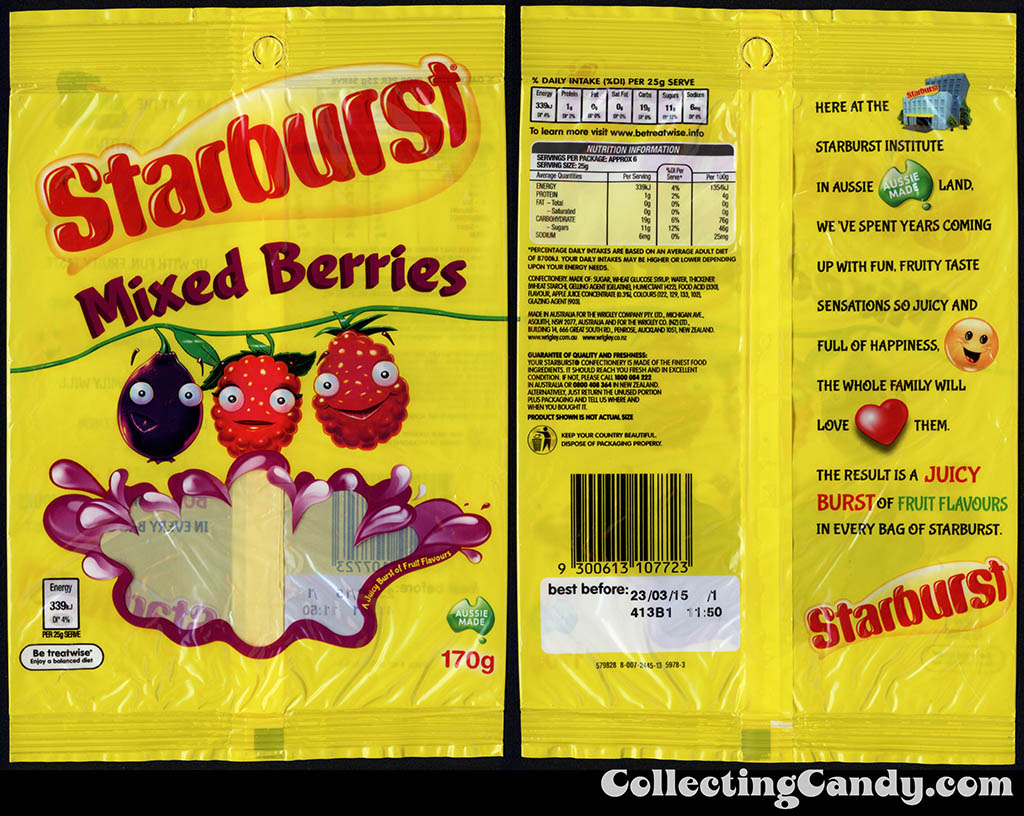 Of course, Australia still shows their love of the original individually-wrapped Starburst fruit chew, though they’ve released flavor assortments of them with packaging in line with their gummies: 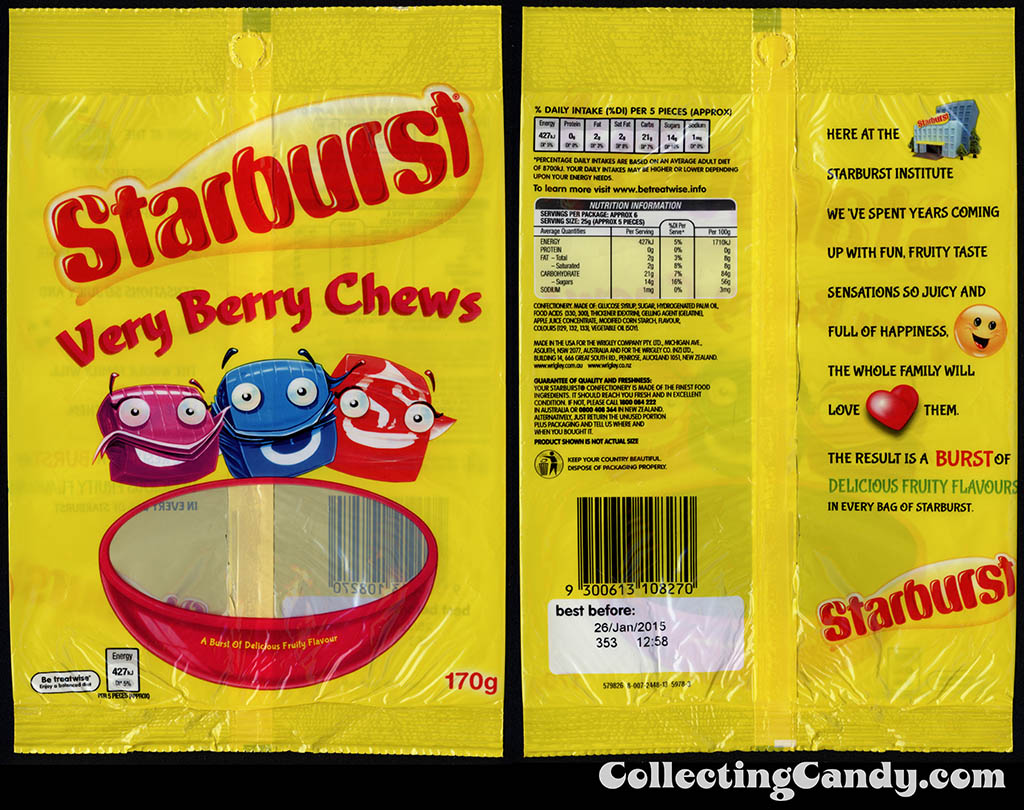 That’s everything I’ve got to share on Australia’s Starburst Gummies (and more!).   I hope this is a line that continues to be successful Down Under and that it leads to many more fun shapes and extensions along the way.  It’s definitely a fun one to collect and if it continues, with luck I’ll be back to cover it again. 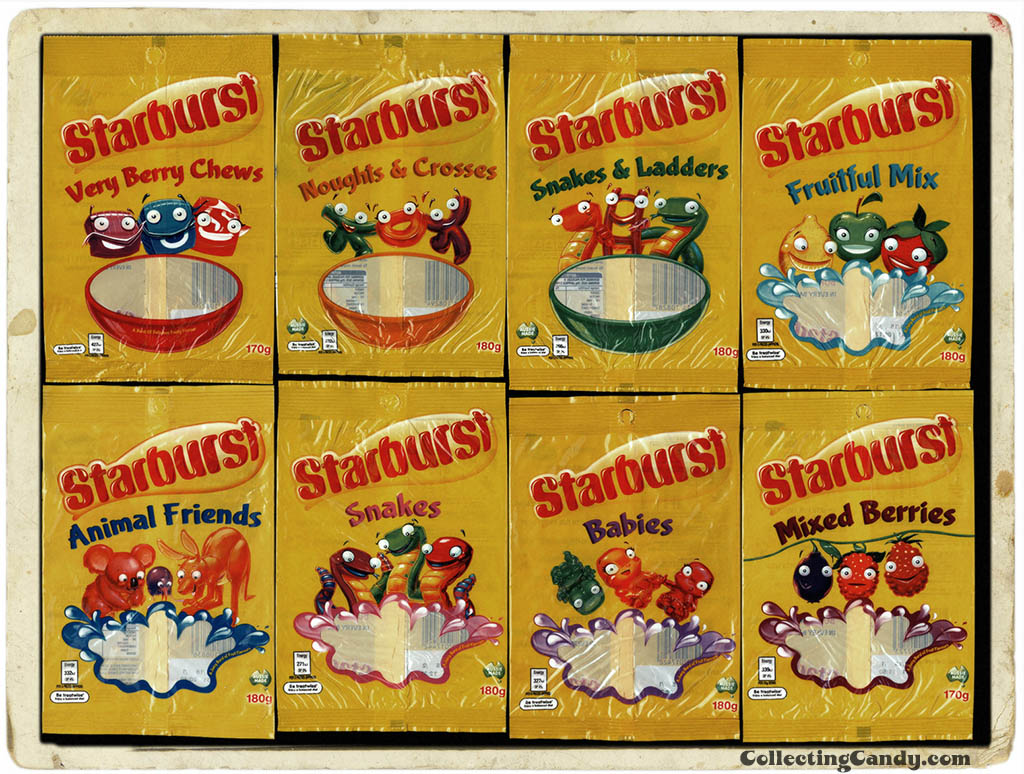 A New York City based writer, editor and sometimes actor. After spending much of the 1990′s in the comic book business helping tell the stories of Marvel Comics’ X-Men as series editor, he has since split his time between developing his own entertainment properties while still consulting and working on others. Having been described as “the Indiana Jones of lost and forgotten candy”, Jason is one of the country’s premier candy collectors and historians with his discoveries appearing in countless blogs, magazines, newspaper articles, and books. Always happy to share his knowledge and unique perspectives on this colorful part of our popular culture, Jason has consulted with New York’s Museum of Food and Drink and has also been a featured guest on Food Network’s Heavyweights, France’s M6 Capital, and New York’s TheActionRoom.com. My Google Profile+
View all posts by Jason Liebig →
This entry was posted in Gummies, Mars and tagged Australia, candy collecting, candy collection, candy collector, candy wrapper collection, candy wrapper collector, collectible, collecting candy, confectionery, confections, gummi, Gummies, gummy, mascot, New Zealand, packaging, packaging design, Starburst, sweets, vintage candy wrappers, wrapper. Bookmark the permalink.