For those out there that celebrate it; Merry Christmas!  And for everyone else, Happy Holidays and end-of-year wishes from CollectingCandy.com!

My main priority this week has been my friends and family so I haven’t had much time to devote to creating new posts, but I did want to get one more fun holiday piece done for today.  With that in mind, I thought I’d bring together a selection of vintage wrappers featuring the secular star of Christmas, Santa Claus.  Make the jump to check them out!

First up is an unusual piece I acquired a few years ago.  It’s an uncut sheet of six Christmas-themed hang-tags for Luden’s hard candies packages from the 1970’s.  Each of these six pieces would have been separated and folded over, finally being stapled or sealed to a cellophane bag of assorted holiday treats.   I love the Santa Claus illustration on these, which is why I also chose it for the title image of today’s post. 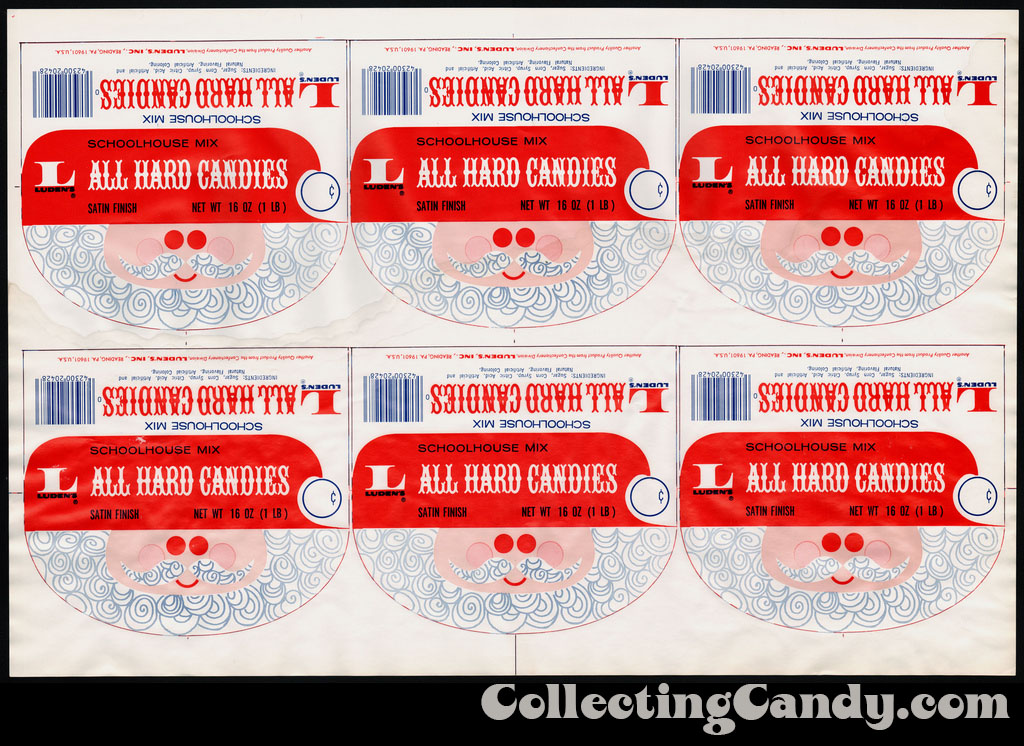 Next up are a pair of handsome foil wrappers from Whitman’s Chocolates, also from the 1970’s.  They make for a cool pair of twin smiling Santas: 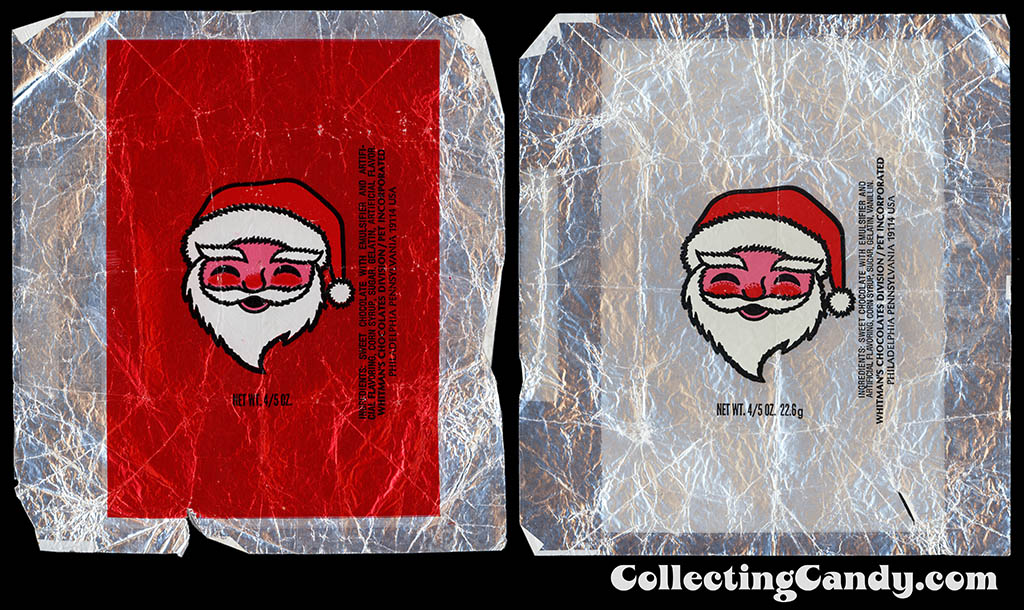 The holiday foil continues with this next lovely offering from Melster candies: 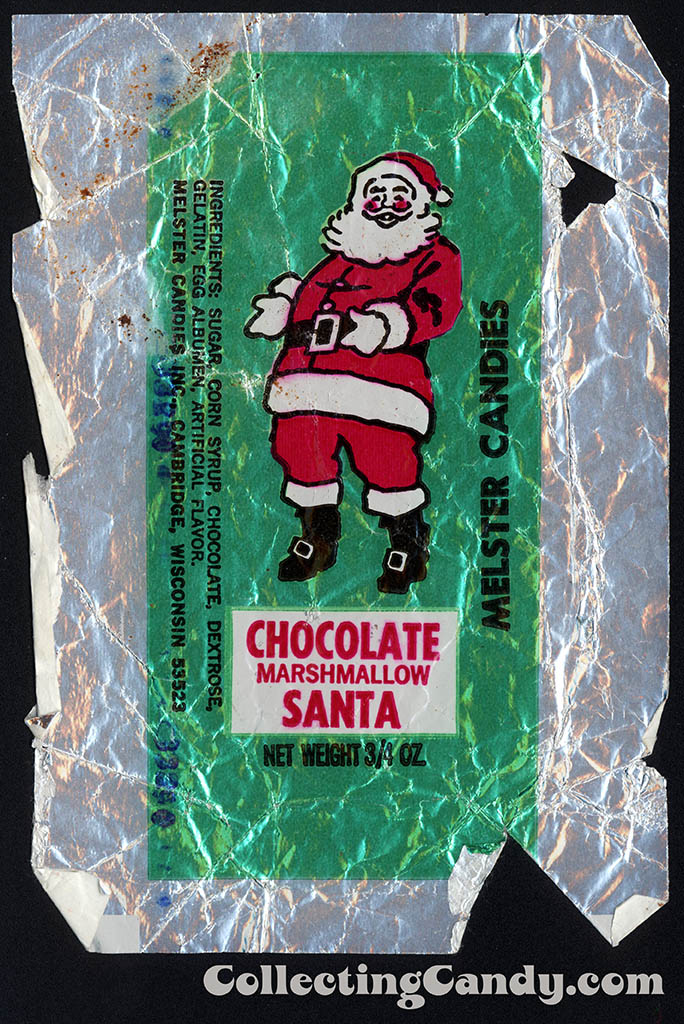 And another chocolate marshmallow Santa, this time from E. Rosen: 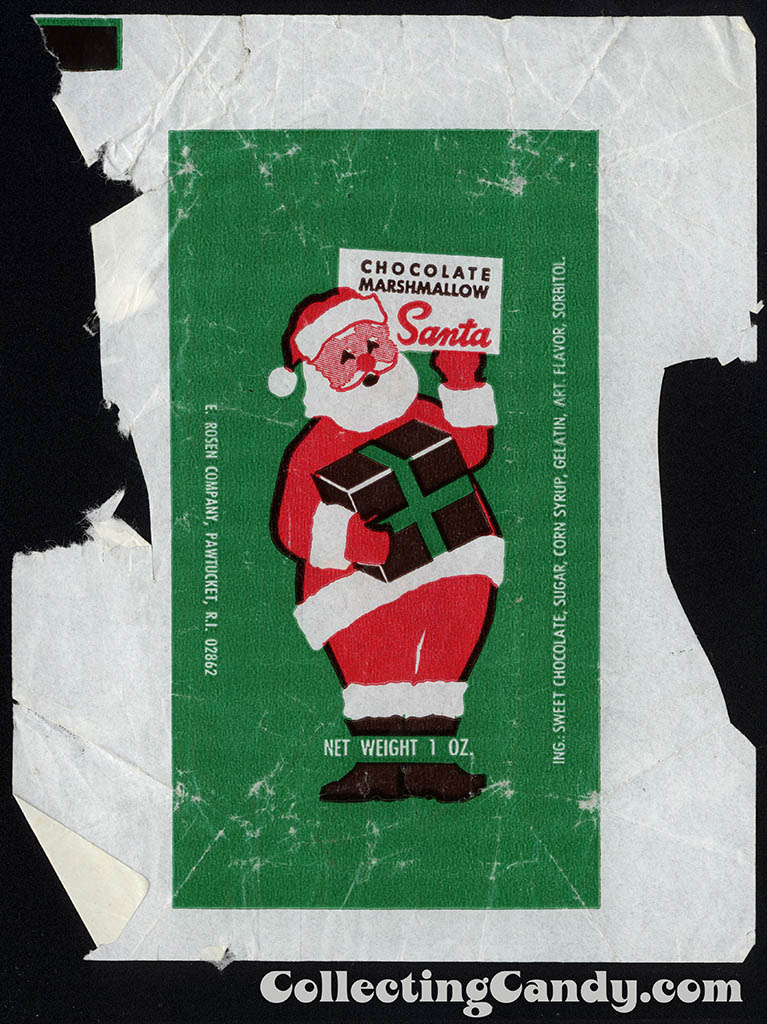 Now here’s a fun one from 1970’s Topps – a display box flat for the Christmas edition of their classic Big Mouth On-a-Stick bubble gum pop: 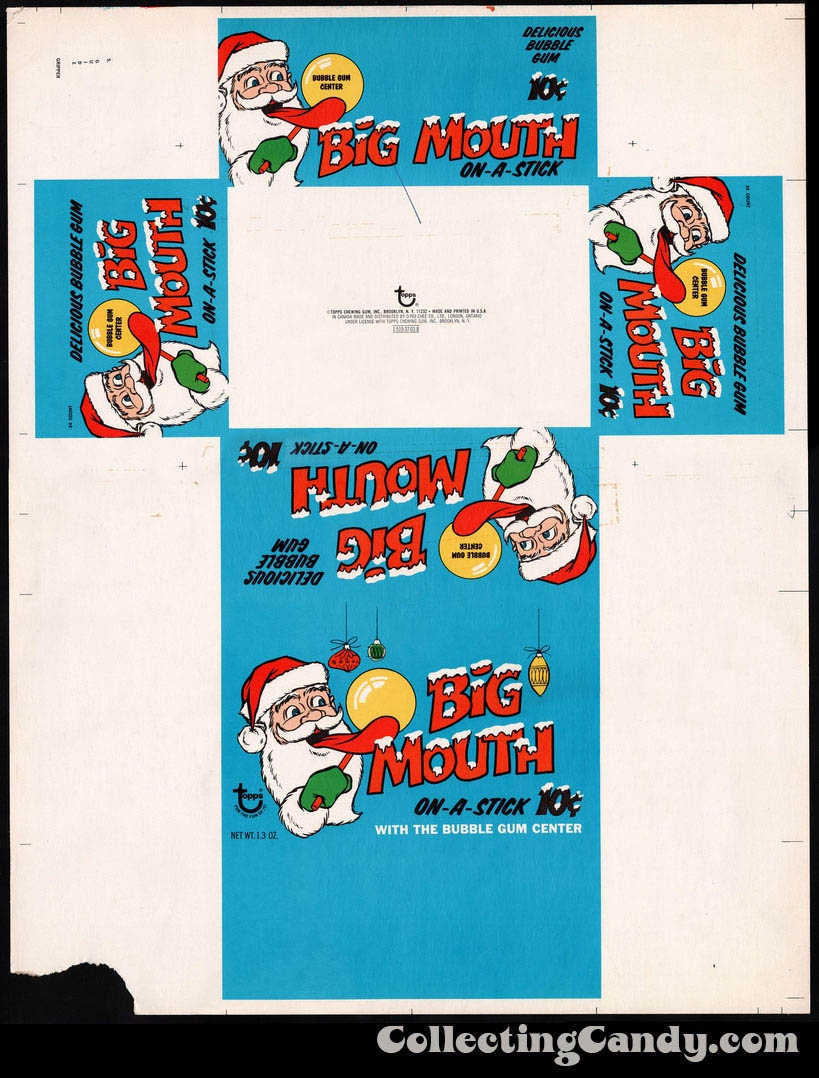 For comparison, here is a display box flat of the all-year-round version of Big Mouth On-A-Stick: 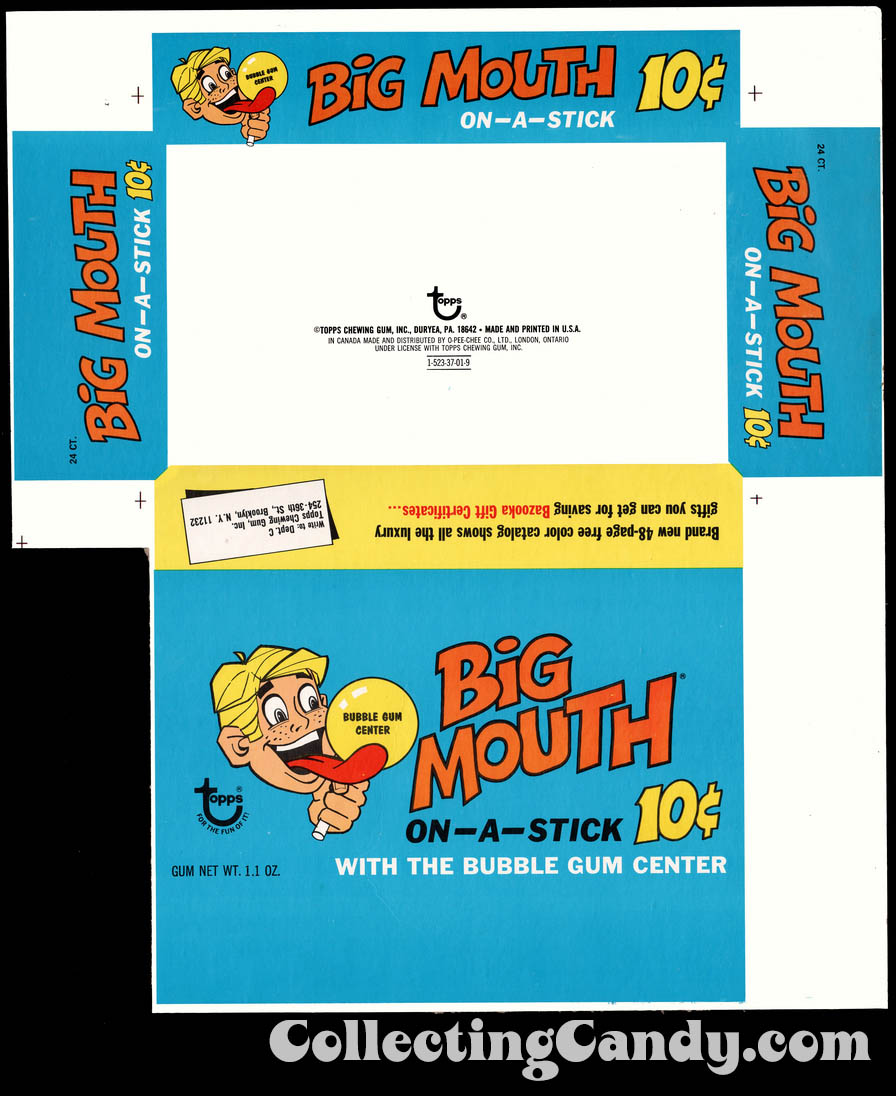 Next up is another 1970’s Luden’s piece.  This time it’s a happy marshmallow Santa in cellophane (and on skis!): 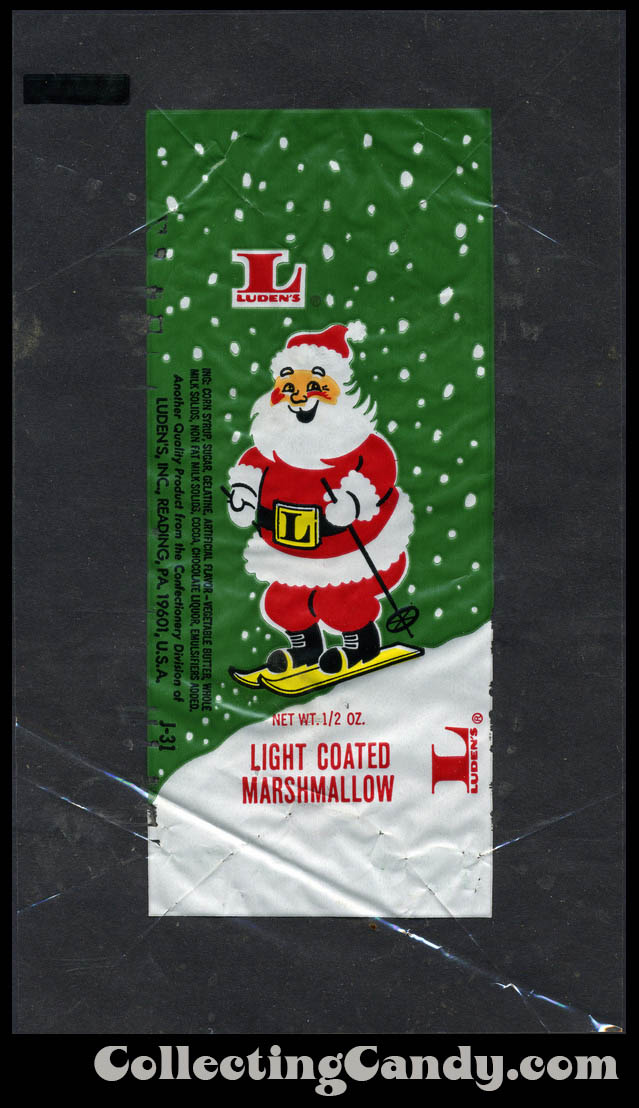 One of my all-time favorite pieces of Christmas candy packaging is the one I’m showing next.  It’s an outer wax box wrap that would have covered an unopened full display box of Life Savers candies during the 1964 holiday season.  The remarkable thing is, this festive piece of packaging would have rarely been seen by consumers because these wraps typically got removed before the candy was put on store shelves.  So these wonderful graphics were created for and mainly seen by retailers and salesmen: 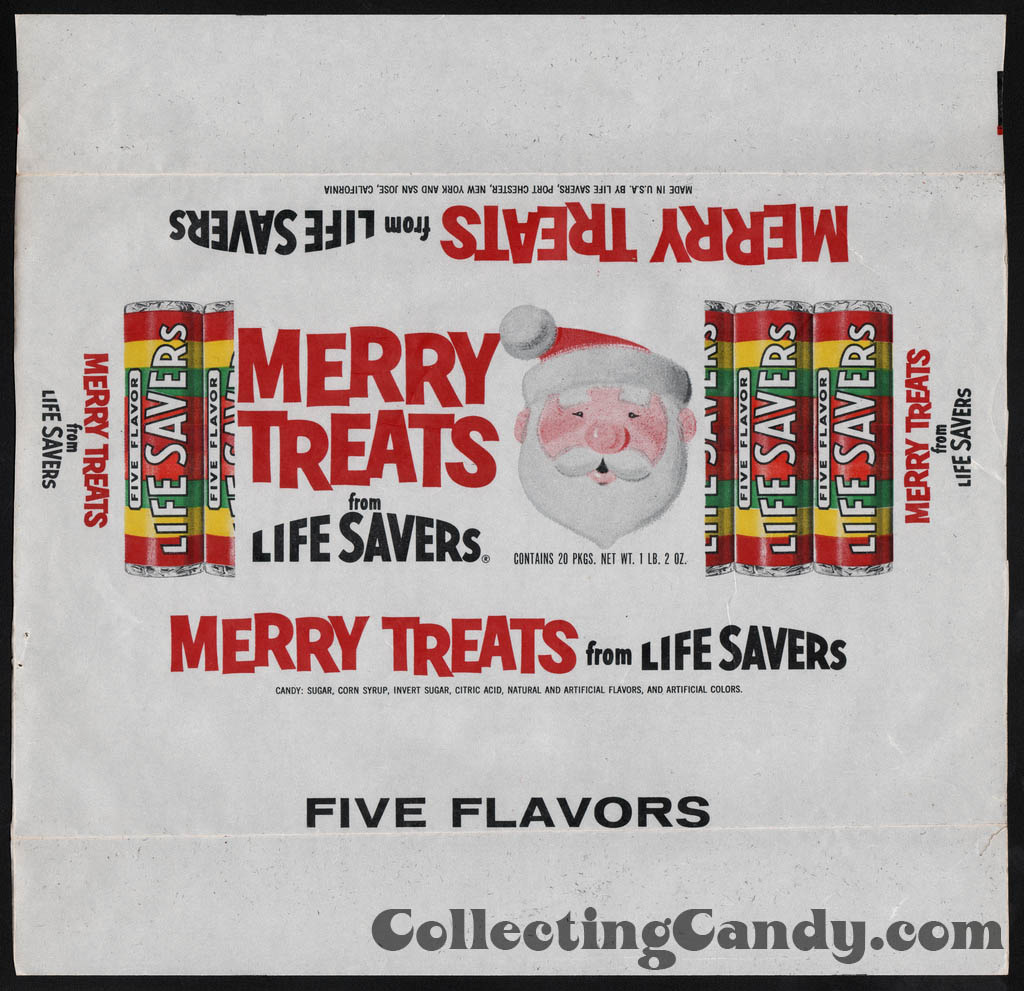 Here are a couple final Santa pieces I pulled together for today: 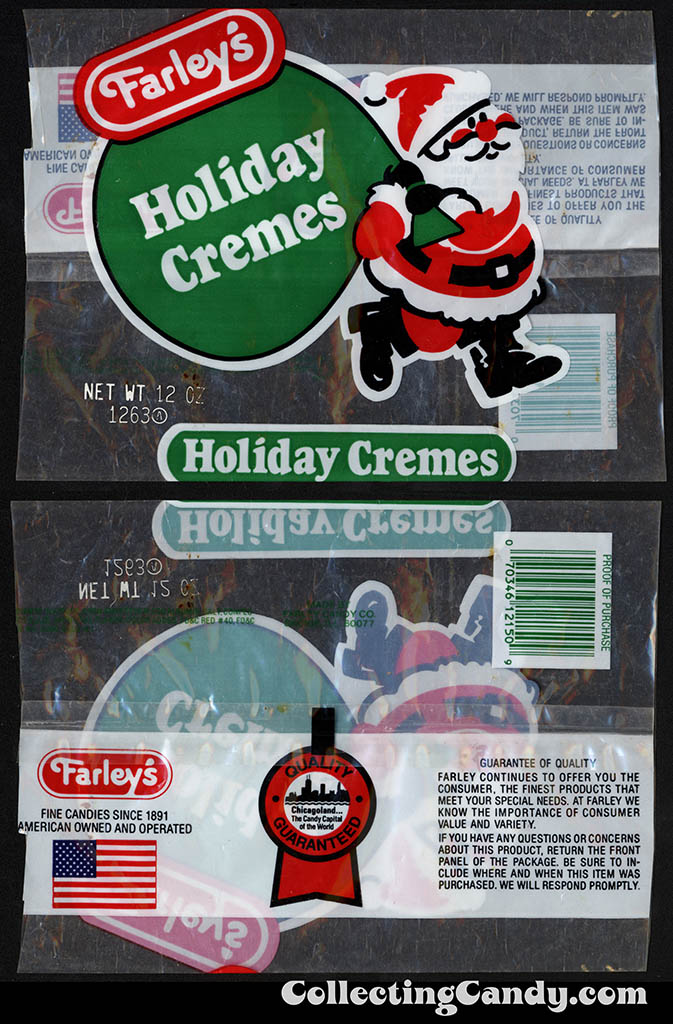 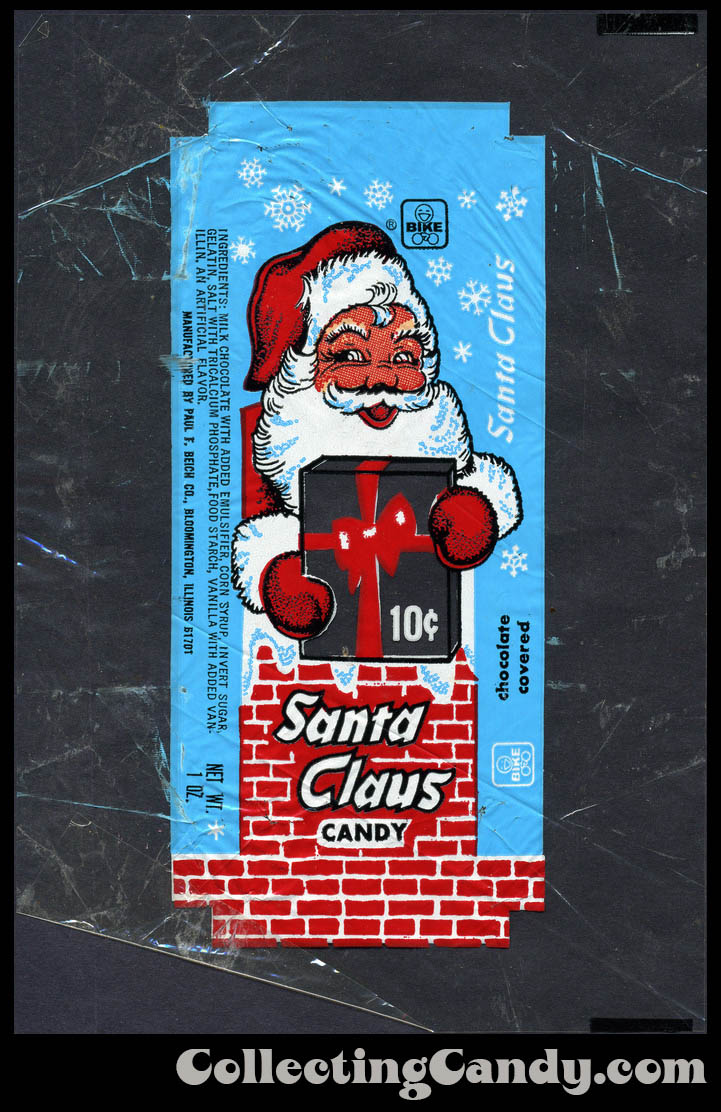 And that’s everything I’ve got to share today.  While I’m excited to get back to my Christmas activities I’m especially happy that I was able to bring these wonderful vintage Santa candy packages together for the day.

Merry Christmas everyone, and I’ll see you next time! 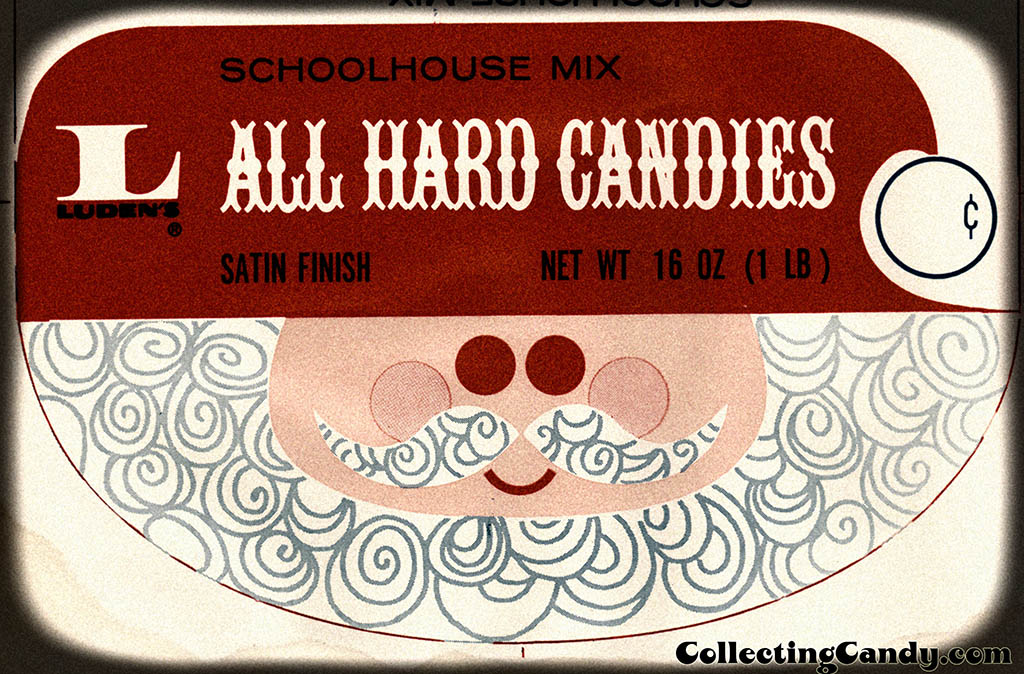 A New York City based writer, editor and sometimes actor. After spending much of the 1990′s in the comic book business helping tell the stories of Marvel Comics’ X-Men as series editor, he has since split his time between developing his own entertainment properties while still consulting and working on others. Having been described as “the Indiana Jones of lost and forgotten candy”, Jason is one of the country’s premier candy collectors and historians with his discoveries appearing in countless blogs, magazines, newspaper articles, and books. Always happy to share his knowledge and unique perspectives on this colorful part of our popular culture, Jason has consulted with New York’s Museum of Food and Drink and has also been a featured guest on Food Network’s Heavyweights, France’s M6 Capital, and New York’s TheActionRoom.com. My Google Profile+
View all posts by Jason Liebig →
This entry was posted in 1960's, 1970's, 1980's, Chocolate, Christmas, Holiday, Topps and tagged 1970's candy, candy collecting, candy collection, candy collector, candy wrapper collection, candy wrapper collector, Christmas, Christmas candy, collectible, collecting candy, confectionery, confections, packaging, packaging design, Santa, Santa Claus, sweets, vintage candy wrappers, wrapper. Bookmark the permalink.