After a day of holiday travel, I’m back to my native midwestern home of Nebraska and spending time with family and loved ones.  While I’m here, I want to continue to share some of the neat Christmas candy goodness I’ve got brewing.

Today’s topic is a really cool one as it was completely unexpected, but totally in my area of interest and enthusiasm.  This year, the Kurt S. Adler company of New York teamed up with Just Born to create a beautiful set of three holiday ornaments based on vintage Just Born candy boxes.  Make the jump to check them out!

I’m a long-time fan of the Just Born family of boxed candy products.  In fact, it was my original search for a 1970’s vintage Hot Tamales box that helped lead me to become the passionate pop-culture candy collector and historian that I am today.  So, when I saw that there was a set of holiday ornaments based on those very vintage boxes, I was blown away and immediately ordered a set. 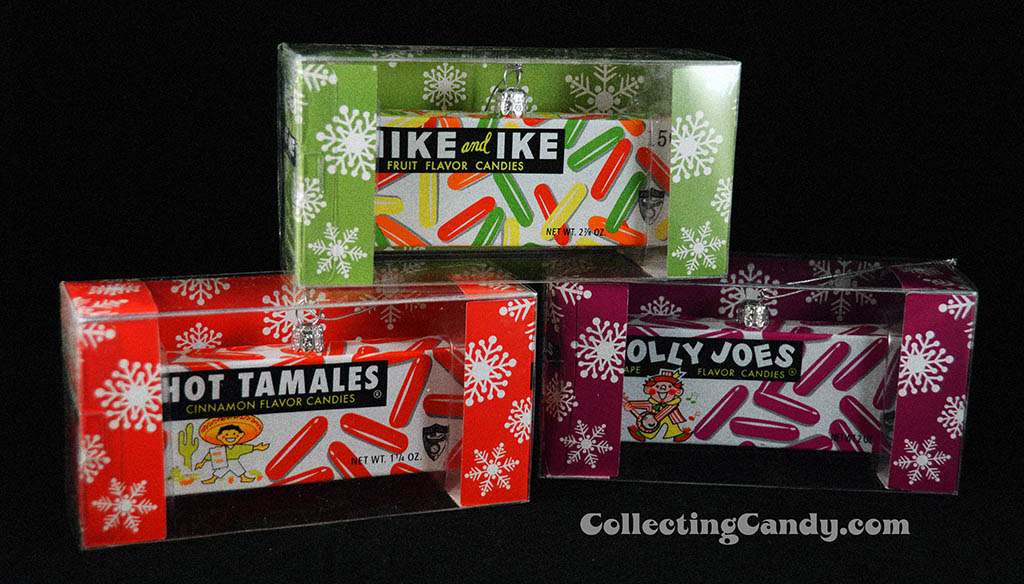 The ornaments come in attractive clear packages, making each piece easily viewable.  I should also note that the scale of these is remarkably close to the actual vintage boxes they portray.  I didn’t have any of my vintage boxes handy, but I would say they are nearly 1/1 scale, possibly a little smaller.  So, if you’ve ever wanted to put one of these vintage boxes on a shelf but couldn’t find one, this is a great alternative.

Let’s take a closer look at each one, starting with my childhood favorite Hot Tamales.

As you can see, the modern Hot Tamales logo and “Get Fired Up!” slogan is paired next to the vintage logo on the back of the box, making a clear identification for those who only recognize the new stuff.

I should also note that the fronts and back of the ornaments are exactly the same (much like this era of vintage Just Born boxes).   I’d like to insert an actual vintage box scan along with each of these opened ornament photos, to show you how well they did in capturing the originals.  This ornament most closely resembles a late 60’s/early 70’s Hot Tamales “long box” I have in my collection:

One oddity is that, while the ornament has the approximate dimensions of a long box, the printed-on volume of 1 1/4 oz is the exact dimensions of a short box I’ve got (can you tell how big of a candy nerd I am?):

Needless to say, I think that Hot Tamales ornament is outstanding.  Now here’s the Jolly Joes:

This time, the ornament has a more long-box appropriate volume indication.  I only have a short box Jolly Joes from this era, so here it is: 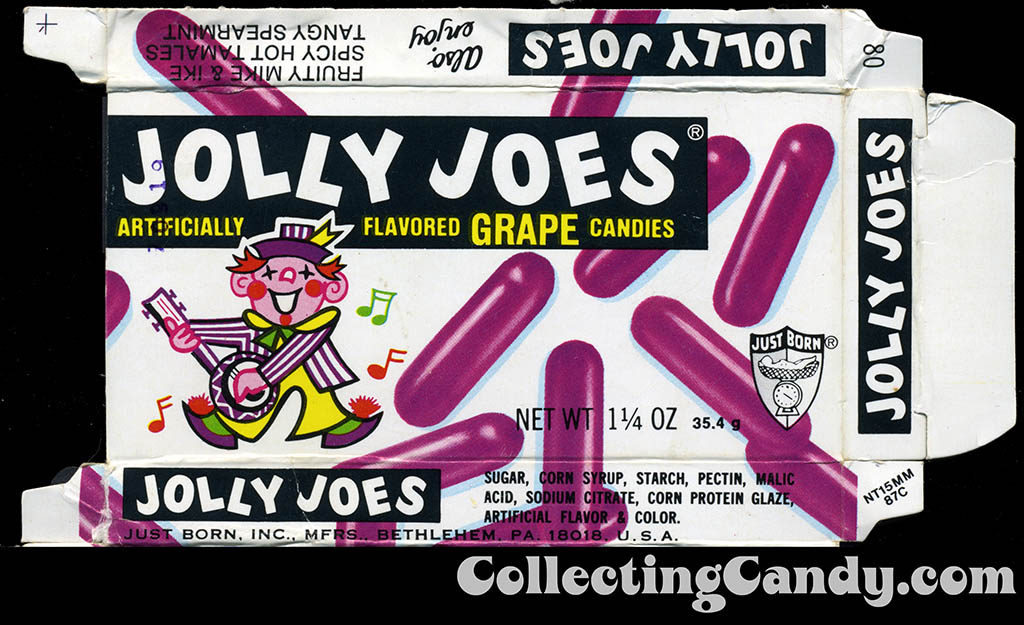 Finally, here is the Mike and Ike ornament from the collection.

You might immediately note that, unlike the previous two examples, this box is devoid of any mascot characters.  I believe that’s because they were attempting to capture the look of Just Born’s 1960’s candy boxes.  And in the 1960’s, Mike and Ike boxes didn’t have mascots, while Hot Tamales and Jolly Joes did.

Of course, by the 1970’s, Just Born would end up finally adding mascots to Mike and Ike as well: 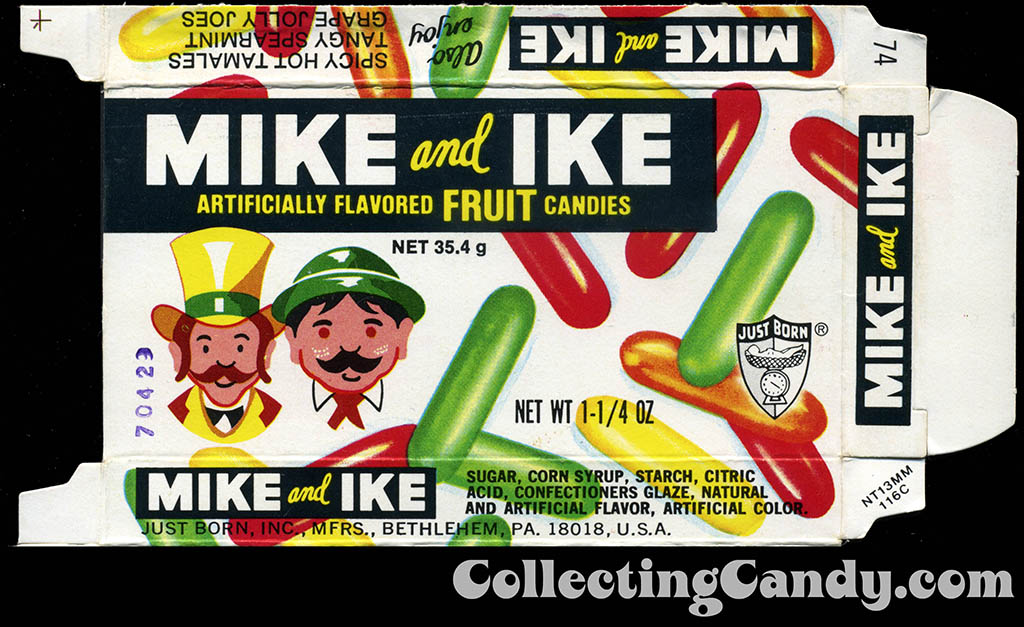 My guess is that, if these ornaments sell well enough, perhaps they’ll continue the line next year with a set designed more after the late 1970’s look of Just Born boxes, with the diagonal banner design boxes like this one: 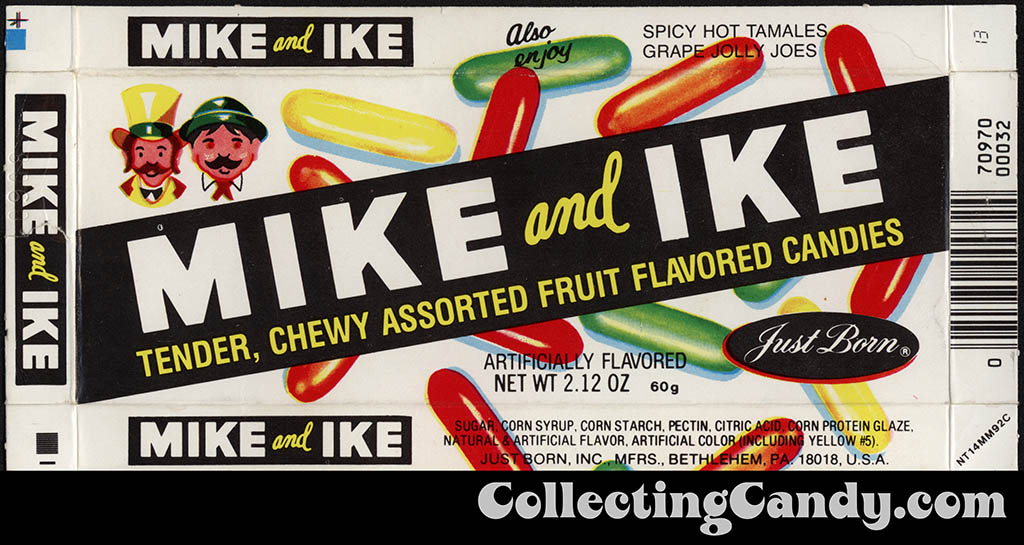 They could follow up after that with a series based on the late 80’s/early 90’s boxes, which sported significantly different designs.  It would be an awfully cool line to collect and to put on the tree!

For now, it’s fantastic that we’ve got this inaugural set of three.  Holiday ornaments based on vintage candy packaging is an idea whose time has come and one I enthusiastically welcome.  I think these make for fantastic gifts and I hope this only leads to more!

By the way, you can order these ornaments individually from the Just Born website here, here and here.

That’s all I’ve got to share on these awesome holiday ornaments and I want to get back to hanging out with family, so I’ll sign off and… I’ll see you next time! 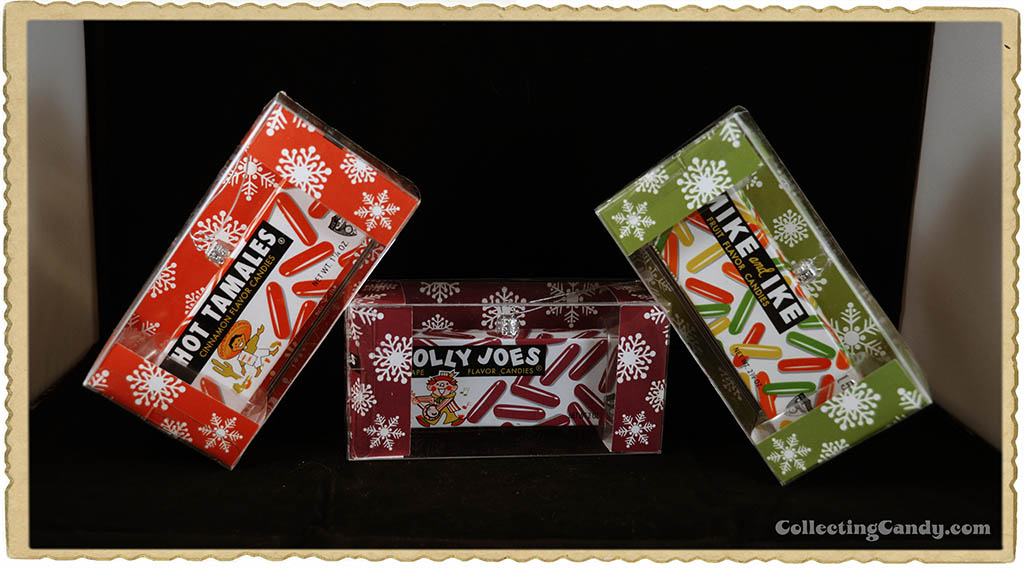 A New York City based writer, editor and sometimes actor. After spending much of the 1990′s in the comic book business helping tell the stories of Marvel Comics’ X-Men as series editor, he has since split his time between developing his own entertainment properties while still consulting and working on others. Having been described as “the Indiana Jones of lost and forgotten candy”, Jason is one of the country’s premier candy collectors and historians with his discoveries appearing in countless blogs, magazines, newspaper articles, and books. Always happy to share his knowledge and unique perspectives on this colorful part of our popular culture, Jason has consulted with New York’s Museum of Food and Drink and has also been a featured guest on Food Network’s Heavyweights, France’s M6 Capital, and New York’s TheActionRoom.com. My Google Profile+
View all posts by Jason Liebig →
This entry was posted in 1960's, 1970's, Boxed, Christmas, Holiday and tagged 1960's, 1970's, candy collecting, candy collection, candy collector, candy wrapper collection, candy wrapper collector, Christmas, collectible, collectibles, collecting candy, confectionery, confections, holiday, Just Born, ornaments, packaging, packaging design, sweets, vintage candy wrappers, wrapper. Bookmark the permalink.