I don’t typically cover non-USA material here on CollectingCandy.com.  It’s not that I find foreign wrappers unappealing in any way.  In fact, they are often some of the most ornate designs I encounter.  It’s simply that it is more challenging to create the context of how to properly discuss and celebrate them.   In spite of that, I recently acquired a set of Cold War-era Russian wrappers that were so interesting, I had to share.

Dating back to 1976, this set of “Soviet Uniform” wrappers represents an era when Russia and the Soviet Union was a mysterious place to most westerners, myself included.  While I was growing up in the Midwest there was almost no media coming out of the Soviet Union, so my image of it and its people was heavily influenced by popular culture and the movies.  Given that fact, this set of chocolate bar wrappers is particularly fascinating for me to look back at now.

So make the jump to take a peek at some fun confectionery packaging from behind the Iron Curtain!

When I try to recall my childhood idea of the Soviet Union, I think back to two early 1980’s films, Red Dawn and Clint Eastwood’s Firefox. 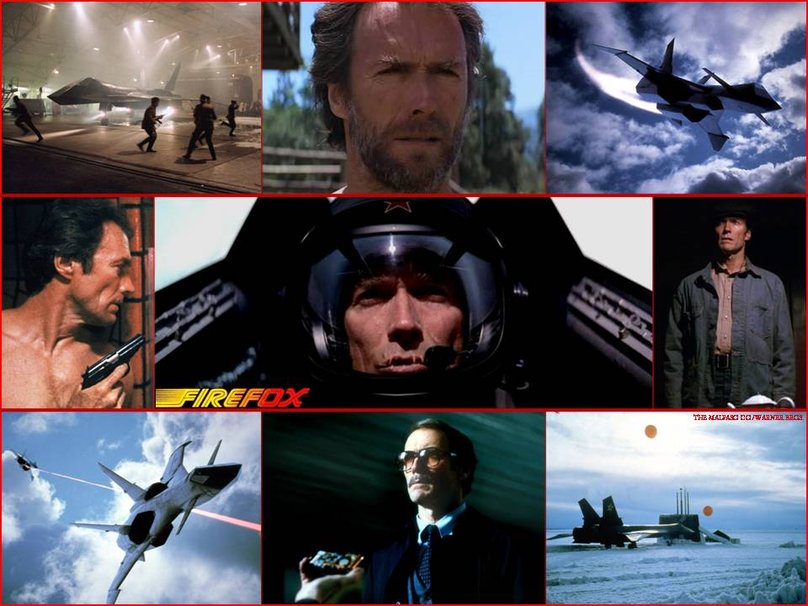 Firefox was the tale of an American (Eastwood) who goes undercover (and into Moscow) to steal a top secret, futuristic fighter jet.  I recall being struck at seeing the cinematic Moscow portrayed on screen and thinking how cool it was to see the place, as modern images of it were virtually nonexistent at the time.

It should be noted that due to the Cold War, Firefox was not able to shoot in Russia and was actually shot on location in Vienna and Austria.  So, I wasn’t even seeing the real Moscow in that movie, but it shaped my mental image of how the pace looked nonetheless.

Another early cinematic Cold War memory is that of the John Milius film, Red Dawn.

Unlike Firefox, Red Dawn was actually set in the Midwestern United States, albeit one that had been invaded by Russian-led military forces.  It’s quite an 80’s action/war romp, with a great soundtrack and a fun cast to boot.

I bring this all up to highlight that, up until the 1990’s, the Soviet Union and Russia was a pretty mysterious place to outsiders, and one that generated a good deal of trepidation and fear.  It was an unknown region and one where you wouldn’t have imagined colorful chocolate bar wrappers being produced — and yet they were.  Though I suppose it could be fairly said that the following wrappers had a nationalistic message to them.

Since I didn’t go about translating these wrappers, I’ve simply dubbed them the “Soviet Uniform” series.  If anyone out there can tell me what they actually say, I’d love to hear.

Let’s get to them: 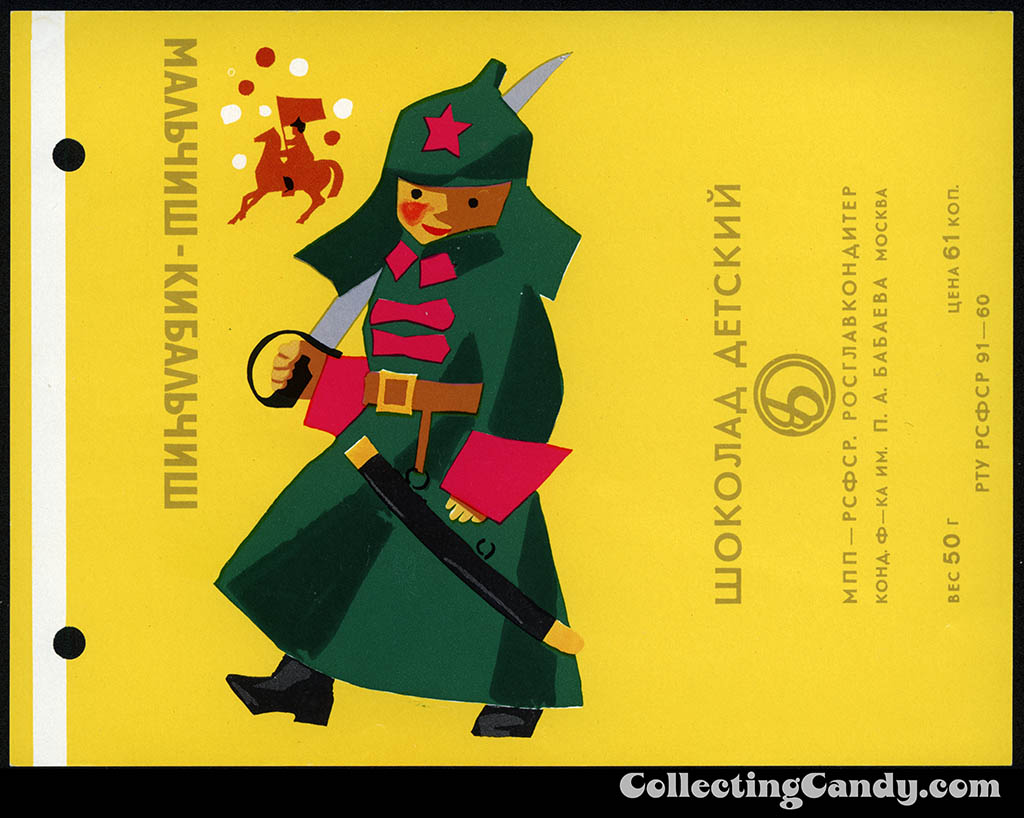 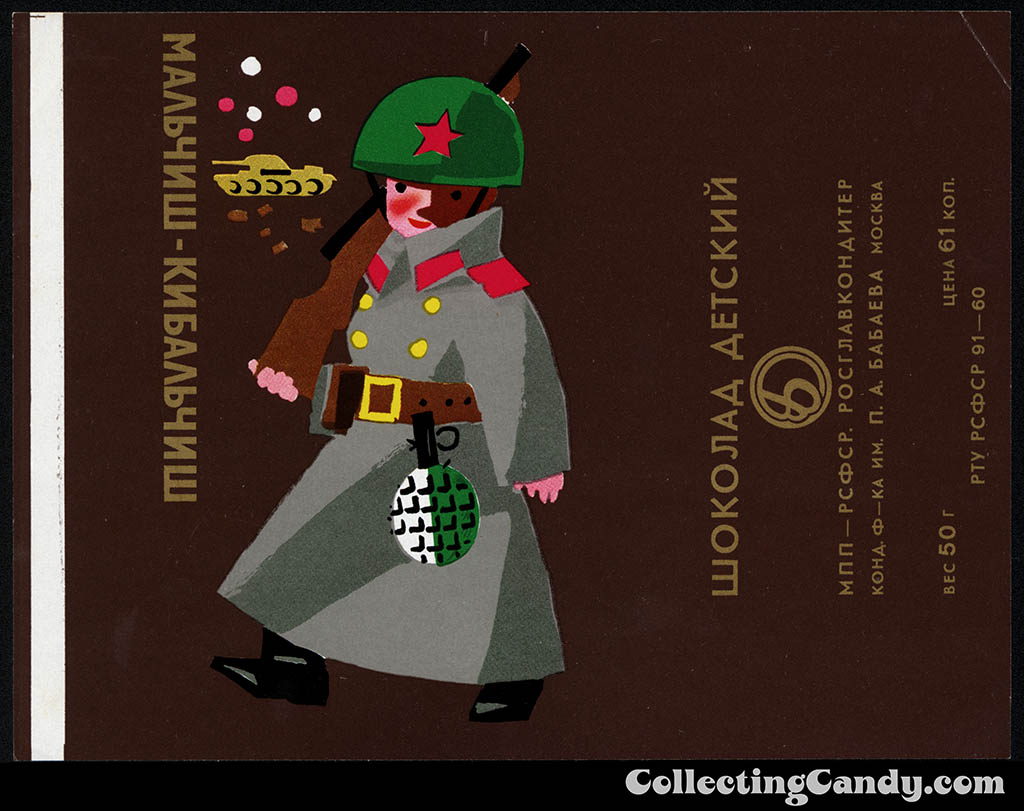 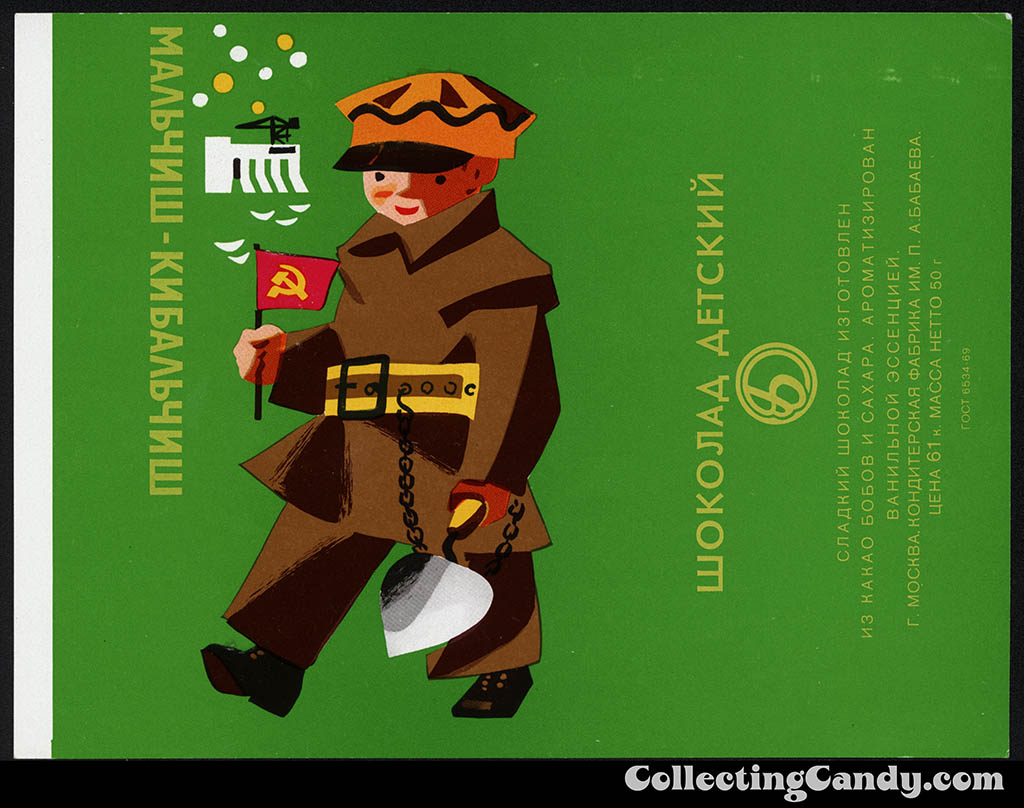 This last wrapper is my favorite of the bunch, as it sports a Russian Cosmonaut:

I especially dig the cosmonaut wrapper as I’m a big fan of NASA and the United States space program history.  When astronaut Neil Armstrong passed away back in 2012, I devoted a post to him.

So that cosmonaut wrapper has special appeal for me.  But considering it and how I wanted to cover it for today’s post, I was reminded that I had never done any in-depth reading on the early days of the Russian space program or its most famous hero, Yuri Gagarin.  I remedied that last night with a good bit of online research about the man and his life.

For those that don’t know, Yuri Gagarin was the first person to make it into space.  It was a huge accomplish for the Russian space program and their national pride, but it was also a huge achievement for all mankind.  Even during the Cold War, Yuri’s success was something the entire world could celebrate.

Gagarin was only 27 years old when he became the first man to orbit the Earth, an amazing and historic achievement.  The year was 1961.  Tragically, Gagarin died just seven years later during a training accident while piloting a Russian Mig fighter jet.  During his remarkable life, Yuri Gagarin achieved much and lived up to the mantle of international role model and face of a new era of human exploration. 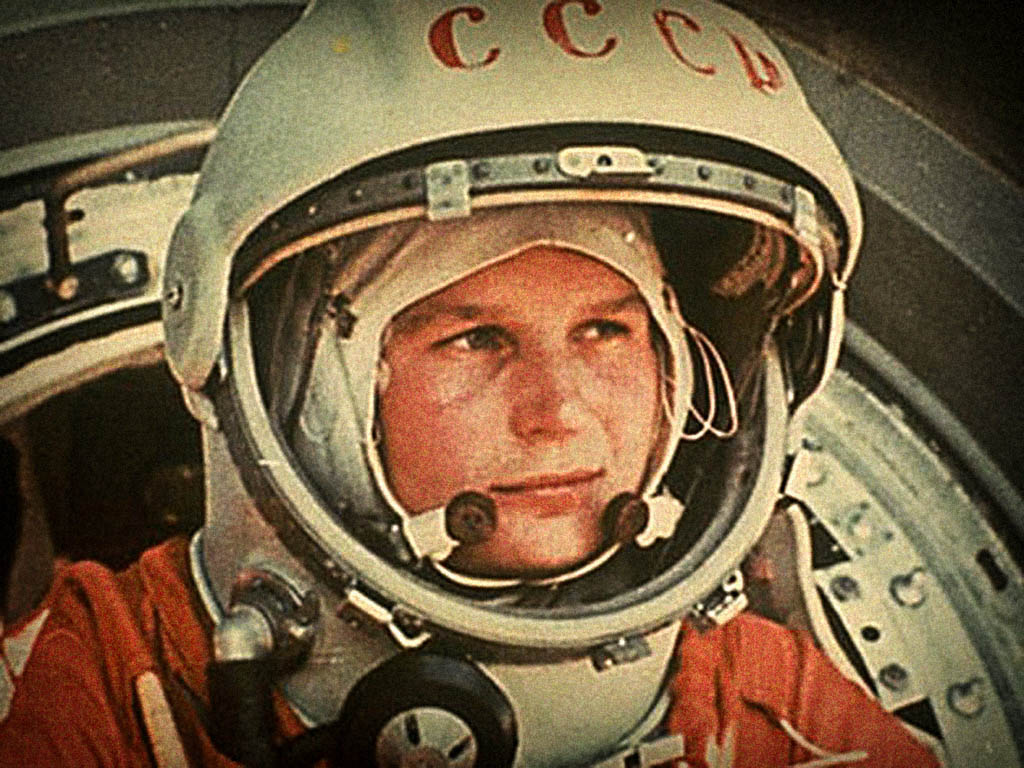 The wrappers I’ve shared today are bright and colorful and due to my idea of Soviet Russia at the time, would have been surprising to me.  But I have a few other Russian wrappers from the same era which fall more inline with the preconceptions I had back then.

These next three are a bit more stodgy and serious, but still quite beautiful. 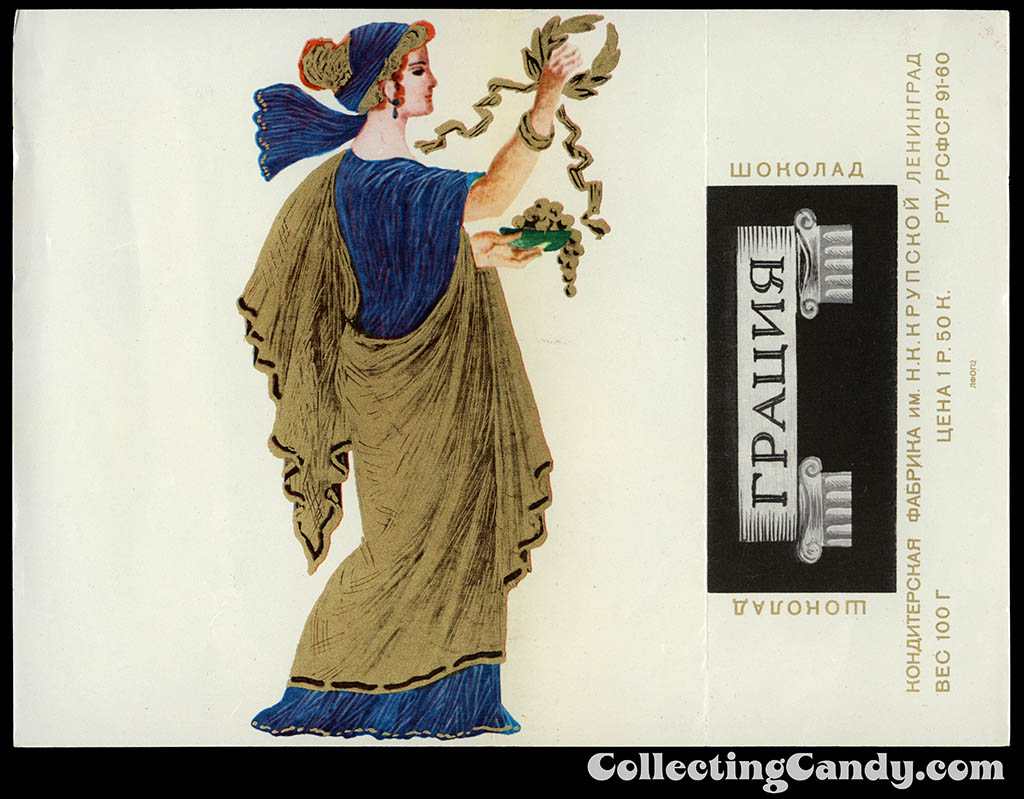 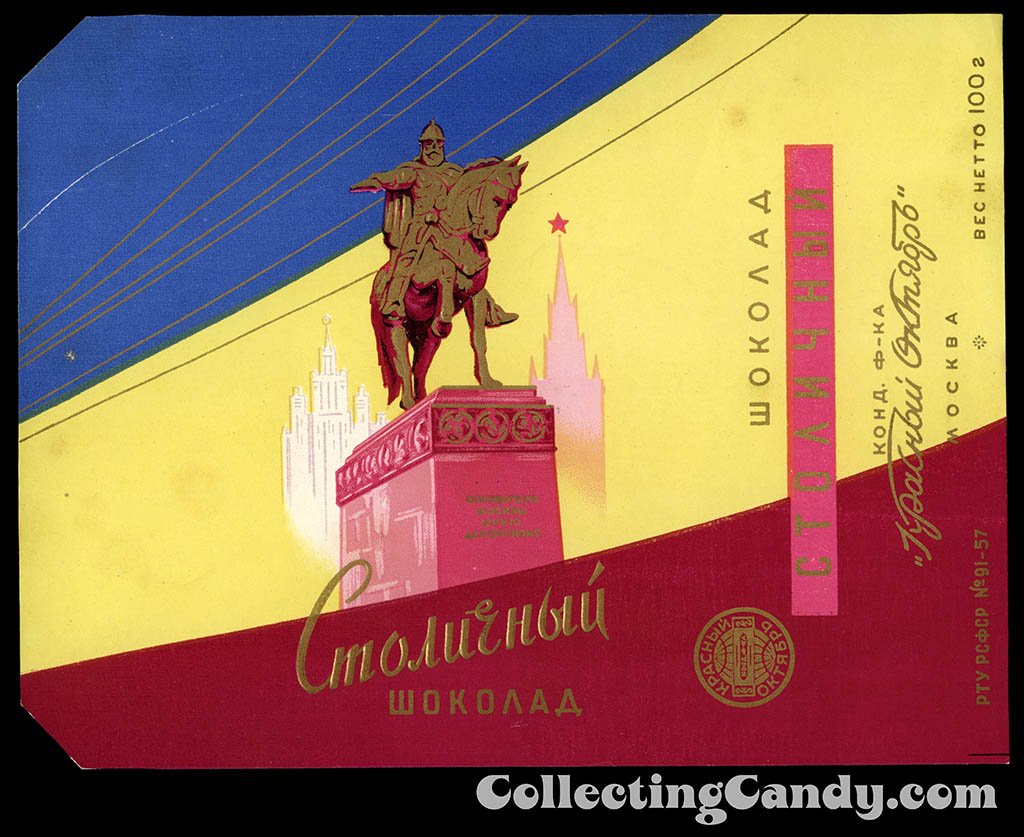 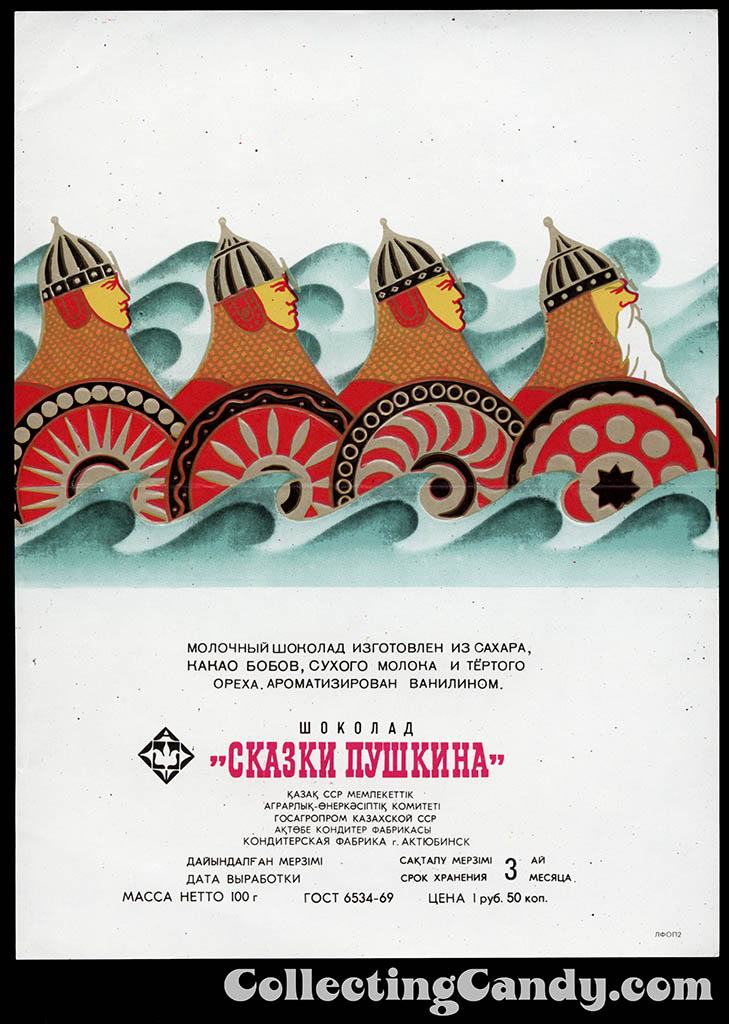 Once again, I did not translate those so if anyone can discern their brand names and so on, please leave a comment or drop me an e-mail.

I think today’s wrappers represent a fascinating look into a country that was, at the time, quite mysterious and secretive to outsiders.  That mysterious nature also makes them so much more fun to see now.

Of course, things have changed since the end of the Cold War.   The Soviet Union has long since broken up and Russia is no longer so mysterious or scary to foreigners.  Not only that, but just last year Mars celebrated its 20th Anniversary of brands like Snickers and Twix being available in Russia.   How times have changed!

And that’s everything I’ve got on these Cold War-era Russian chocolate wrappers.  See you next time!

A New York City based writer, editor and sometimes actor. After spending much of the 1990′s in the comic book business helping tell the stories of Marvel Comics’ X-Men as series editor, he has since split his time between developing his own entertainment properties while still consulting and working on others. Having been described as “the Indiana Jones of lost and forgotten candy”, Jason is one of the country’s premier candy collectors and historians with his discoveries appearing in countless blogs, magazines, newspaper articles, and books. Always happy to share his knowledge and unique perspectives on this colorful part of our popular culture, Jason has consulted with New York’s Museum of Food and Drink and has also been a featured guest on Food Network’s Heavyweights, France’s M6 Capital, and New York’s TheActionRoom.com. My Google Profile+
View all posts by Jason Liebig →
This entry was posted in 1970's, Chocolate and tagged 1970's, candy collecting, candy collection, candy collector, candy wrapper collection, candy wrapper collector, cold war, collectible, collecting candy, communist, confectionery, confections, packaging, Russia, Russian, Soviet, sweets, USSR, vintage candy wrapper, wrapper. Bookmark the permalink.