Out of Retirement: Big League Chew Cotton Candy and Strawberry are Back!

Big League Chew bubblegum first hit the market back in 1980 and at the time, came in only a single flavor.  Since then, quite a number of flavor extensions have been released with a few of them becoming part of a long-reigning standard Big League Chew assortment like grape and watermelon.   Still other flavors have seen their glory days pass them by and been put into retirement.

Big League Chew Strawberry was actually one of the very first BLC flavor spinoffs.  It joined Original and Grape as one of the early 1980’s flavors, and featured a package with a Bill Mayer-illustrated mascot: 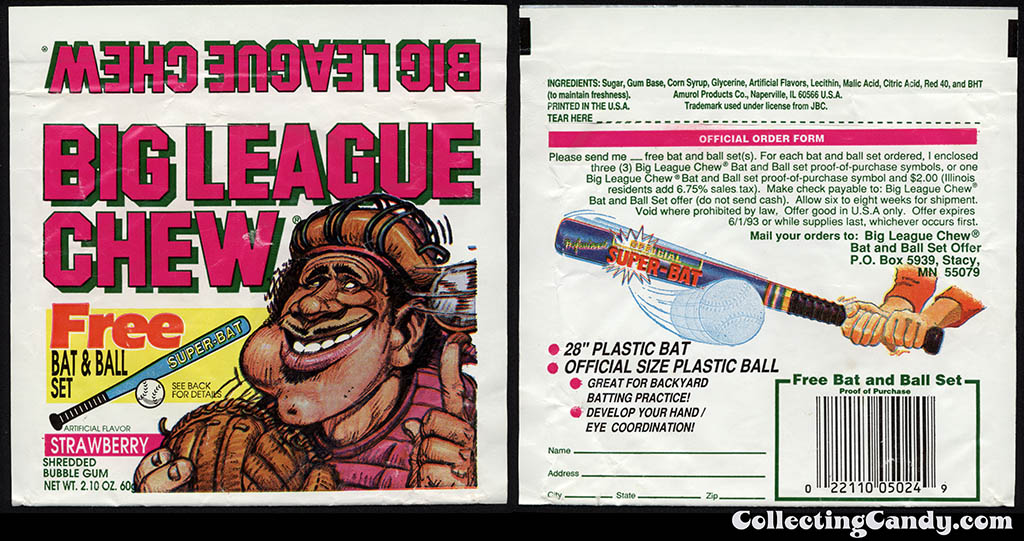 Since taking over the Big League Chew license from Wrigley, Ford Gum has been pretty creative, releasing a number of fun product extensions like bubblegum pops and bubblegum balls.  Even so, I was still surprised when I came across these out-of-retirement flavors.  Though it initially caused me to do a double-take, I was pleasantly surprised when I looked down and saw this staring back at me: 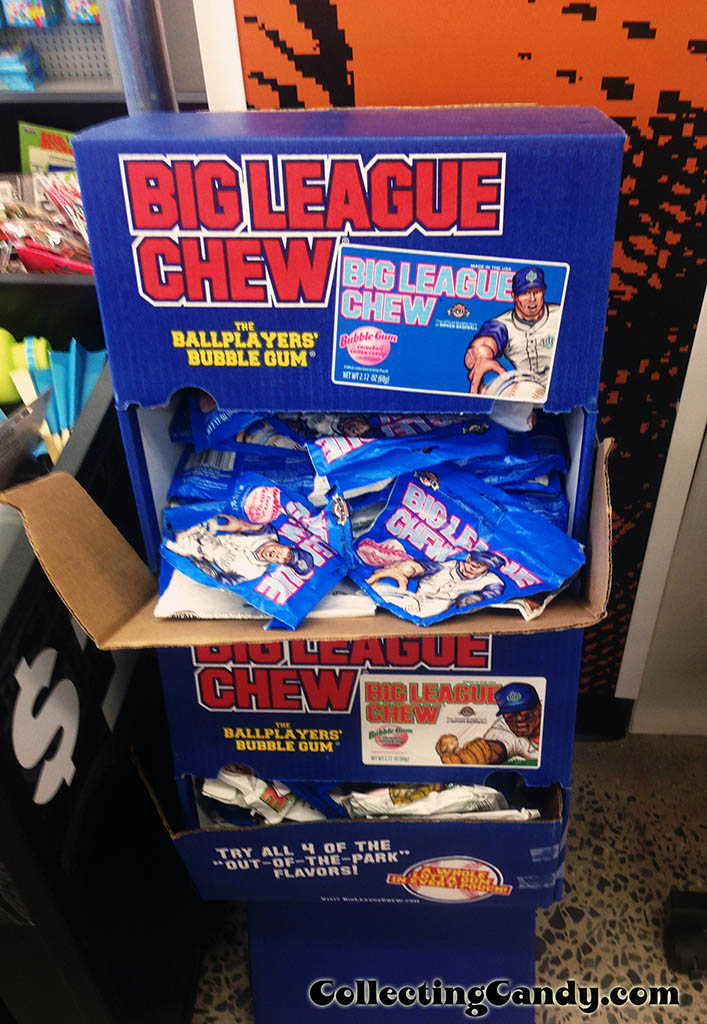 Here are scans of the two packs: 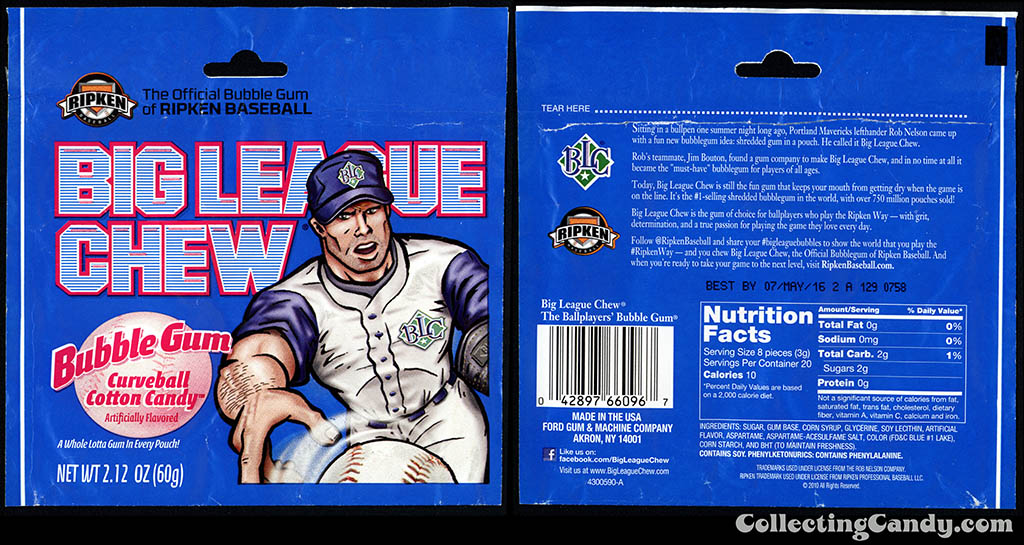 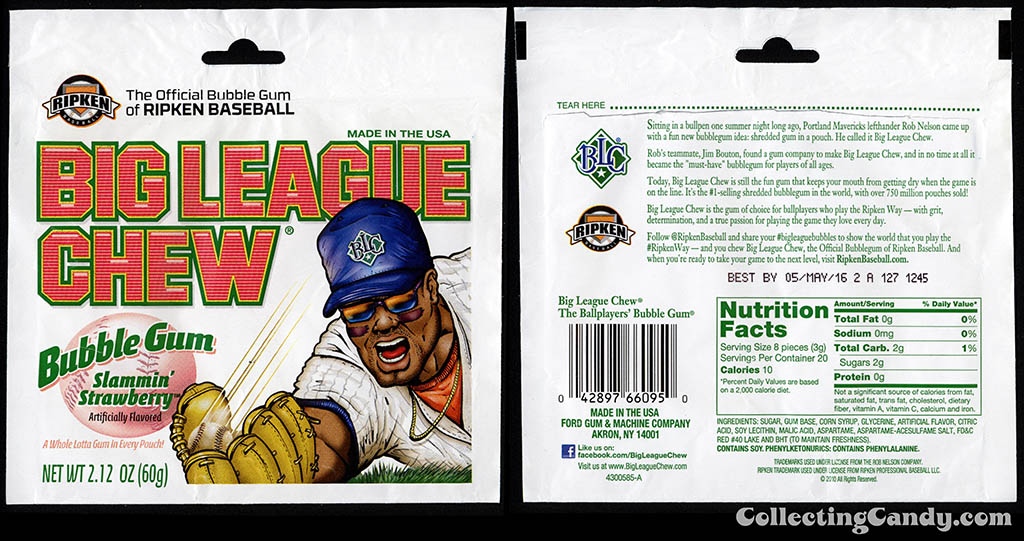 The main package artwork for Slammin’ Strawberry and Curveball Cotton Candy has not changed from the versions that were on shelves a decade ago, but the rest of the design has been brought up-to-date with current Big League Chew packaging.  Most notable is the addition of the “Official Bubble Gum of Ripken Baseball” across the top — an indication of Big League Chew’s association with Cal Ripken’s youth baseball enterprise.

It’s pretty awesome to see these two flavors come out of retirement.  And who knows, with any luck we’ll eventually get to see even more forgotten flavors (or new ones) make the Big League Chew scene.  Here’s hoping!

For those keeping score, this brings the variety of currently-available Big League Chew flavors to a total of six!  Here’s the standard four: 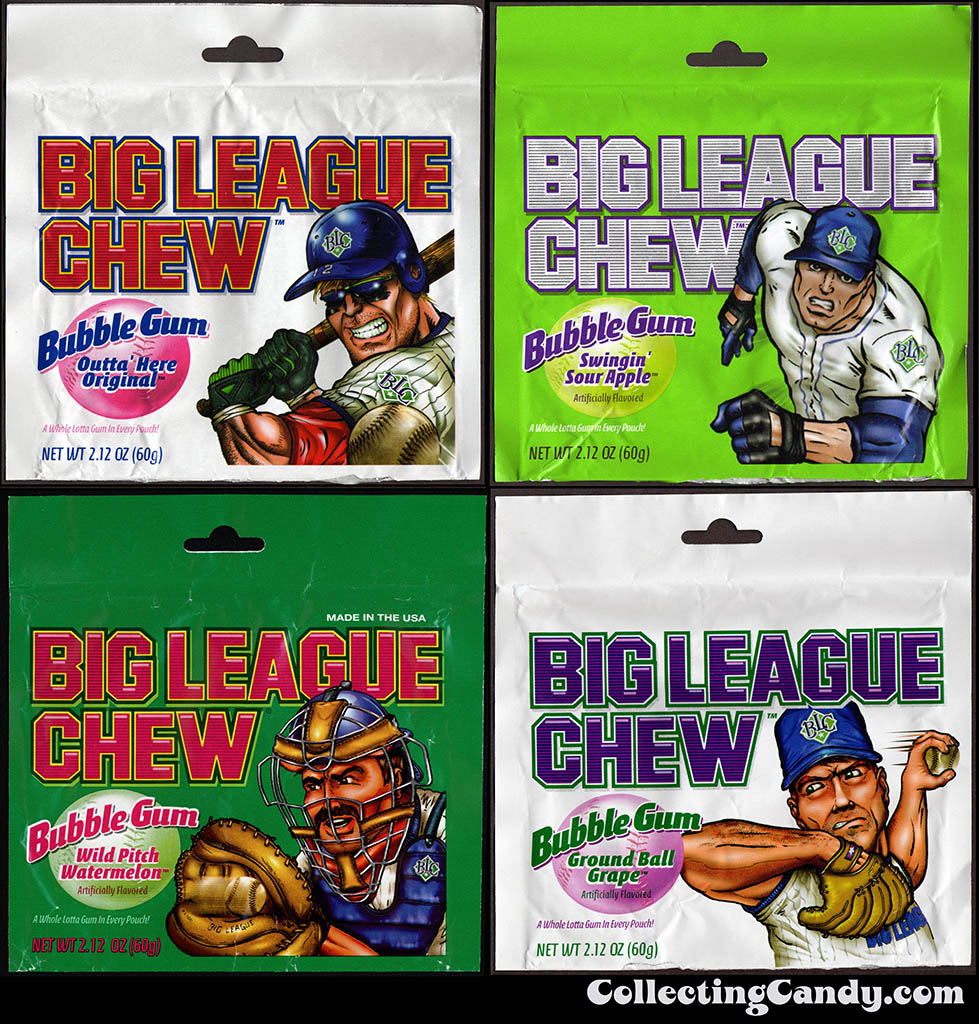 That’s everything for today’s post and the  return of these two retired Big League Chew flavors.  See you next time!

A New York City based writer, editor and sometimes actor. After spending much of the 1990′s in the comic book business helping tell the stories of Marvel Comics’ X-Men as series editor, he has since split his time between developing his own entertainment properties while still consulting and working on others. Having been described as “the Indiana Jones of lost and forgotten candy”, Jason is one of the country’s premier candy collectors and historians with his discoveries appearing in countless blogs, magazines, newspaper articles, and books. Always happy to share his knowledge and unique perspectives on this colorful part of our popular culture, Jason has consulted with New York’s Museum of Food and Drink and has also been a featured guest on Food Network’s Heavyweights, France’s M6 Capital, and New York’s TheActionRoom.com. My Google Profile+
View all posts by Jason Liebig →
This entry was posted in 1980's, 1990's, Bubble Gum, Gum and tagged 1980's, 1990's, baseball, Big League Chew, bubble gum, bubblegum, candy collecting, candy collection, candy collector, candy wrapper collection, candy wrapper collector, collectible, collecting candy, confectionery, confections, cotton candy, gum, packaging, sports, sweets, vintage candy wrapper, wrapper. Bookmark the permalink.

8 Responses to Out of Retirement: Big League Chew Cotton Candy and Strawberry are Back!