Today is October 30th, which is National Candy Corn Day – so I thought it would be the perfect time to bring together an extensive look back at how Brach’s Candy Corn packaging has changed over the decades.

This year the Brach’s line also received a complete packaging design overhaul and refresh, which I’ll also be touching upon.  There’s a lot of ground to cover (and over fifty images to share), so let’s get to today’s 50-year Brach’s Candy Corn Evolution!

Though the Brach’s brand (and its history with candy corn) goes back even further, the earliest my historical lens is able to peer back to is 1953.  That’s because I picked up an amazing Brach’s Fall-Winter sales catalog from 1953 earlier this year.  That catalog features a few wonderful pages dedicated to Halloween candy and candy corn: 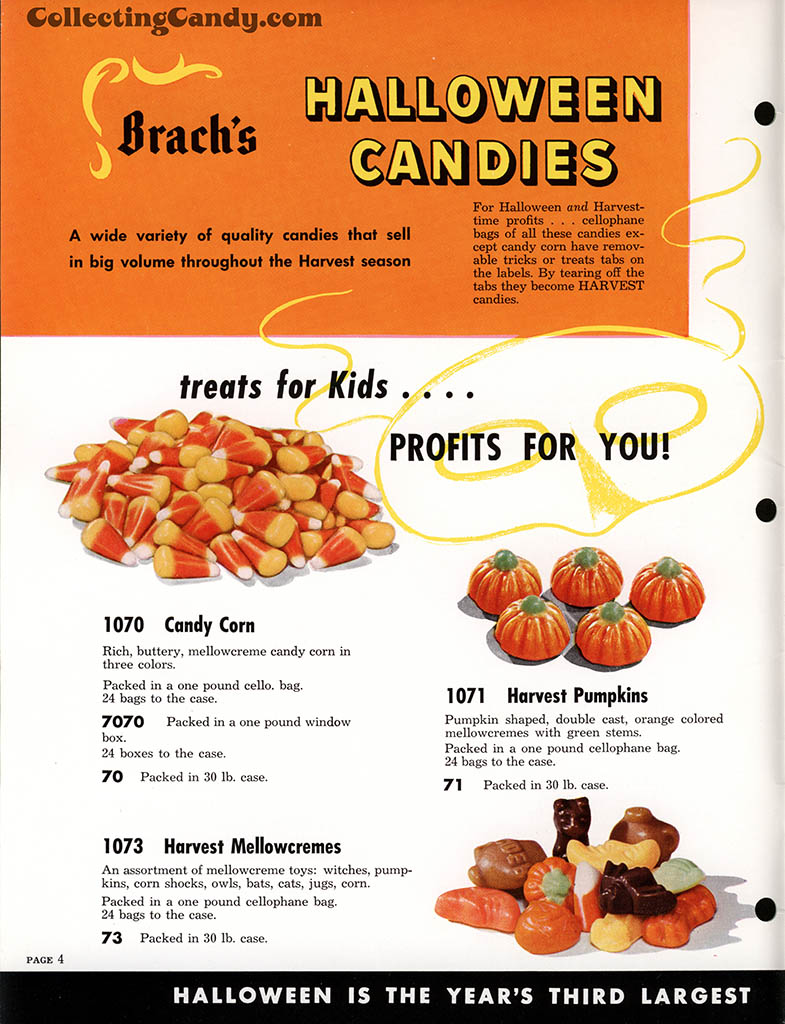 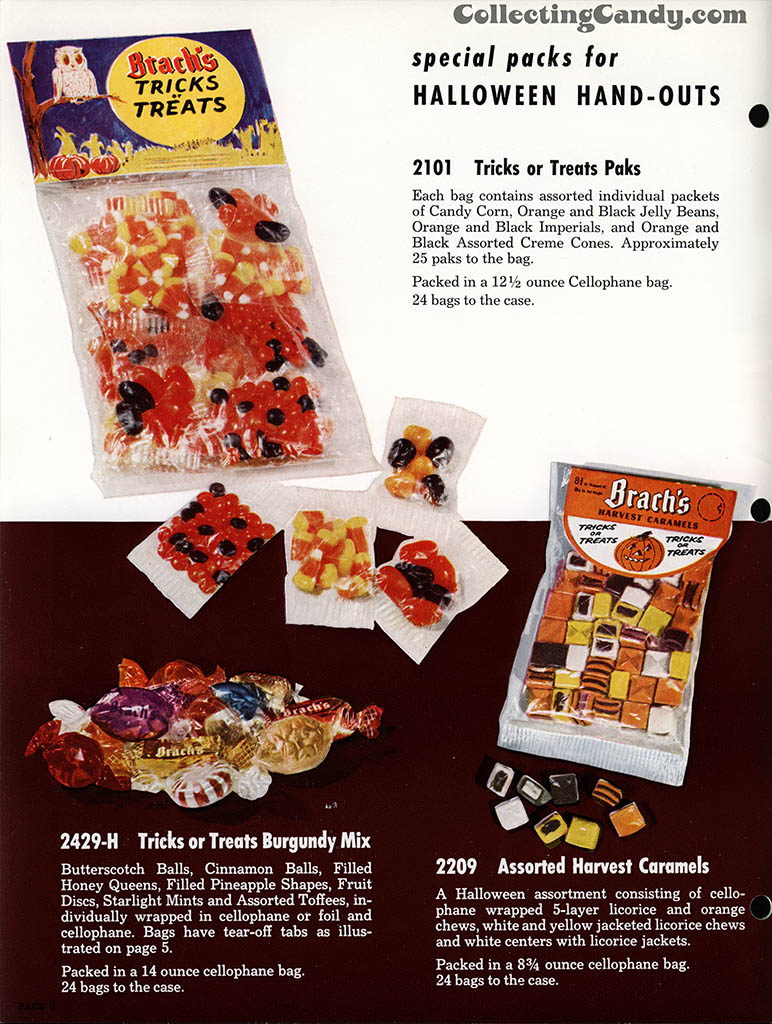 Because those catalog pages feature some great individual items, I’ve isolated and provided close-ups on a few: 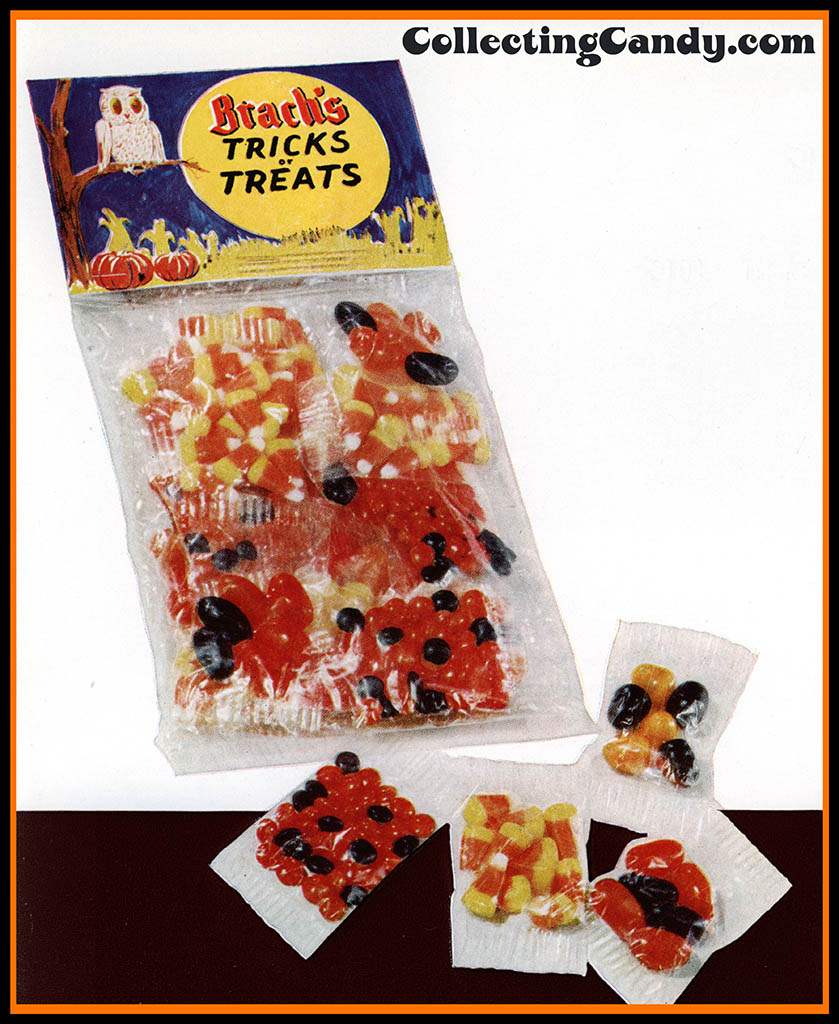 The graphics on these Halloween-themed hanging packs are fantastic.  I’d love to find some of these for my collection some day. 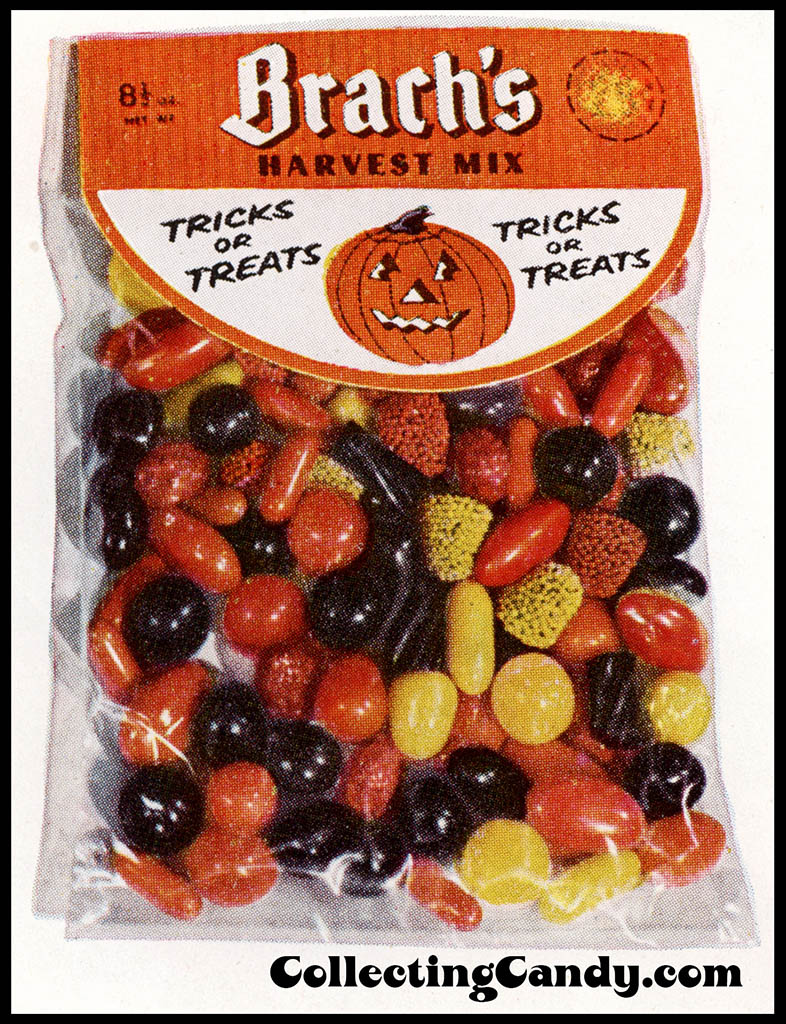 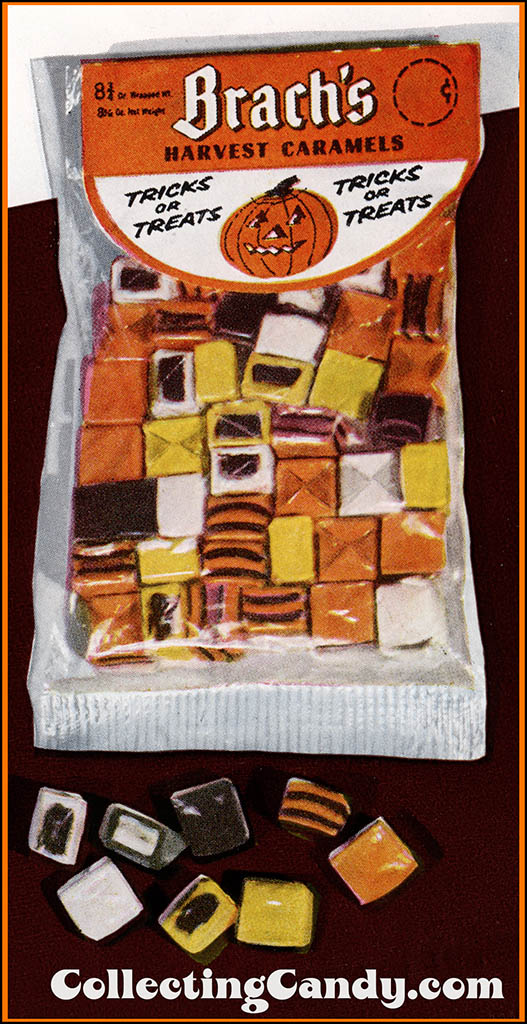 “Harvest Caramels”?  Those look pretty interesting.  Too bad, as I am fairly certain those haven’t been made in a long time – they were not present in the 1971 Brach’s Halloween catalog I covered earlier in our CountdownToHalloween.

Remaining in the 1950’s for a moment, I do have one piece from my collection to share – it’s a Brach’s Candy Corn plastic package.  This package features an ornately framed Brach’s logo very similar to that found in the 1953 catalog.  It’s one of my favorite pieces and I’ve never encountered another like it:

Jumping ahead to the early 1960’s, here are a few clippings of Brach’s Halloween ads from consumer magazines.  If you look closely, you can see that the framing around the Brach’s logo has, by this point in time, lost the ornate carving look that it sported in the 1950’s:

During the middle 1960’s, Brach’s would introduce it’s block-letter style logo, a successful packaging rebranding which would endure for two decades with little alterations.  Here’s the earliest piece in my collection featuring the block-letter logo – a candy corn box:

It’s interesting to note that this entire box design proved to be successful enough that Brach’s were still using it, largely unchanged, into the early 1980’s: 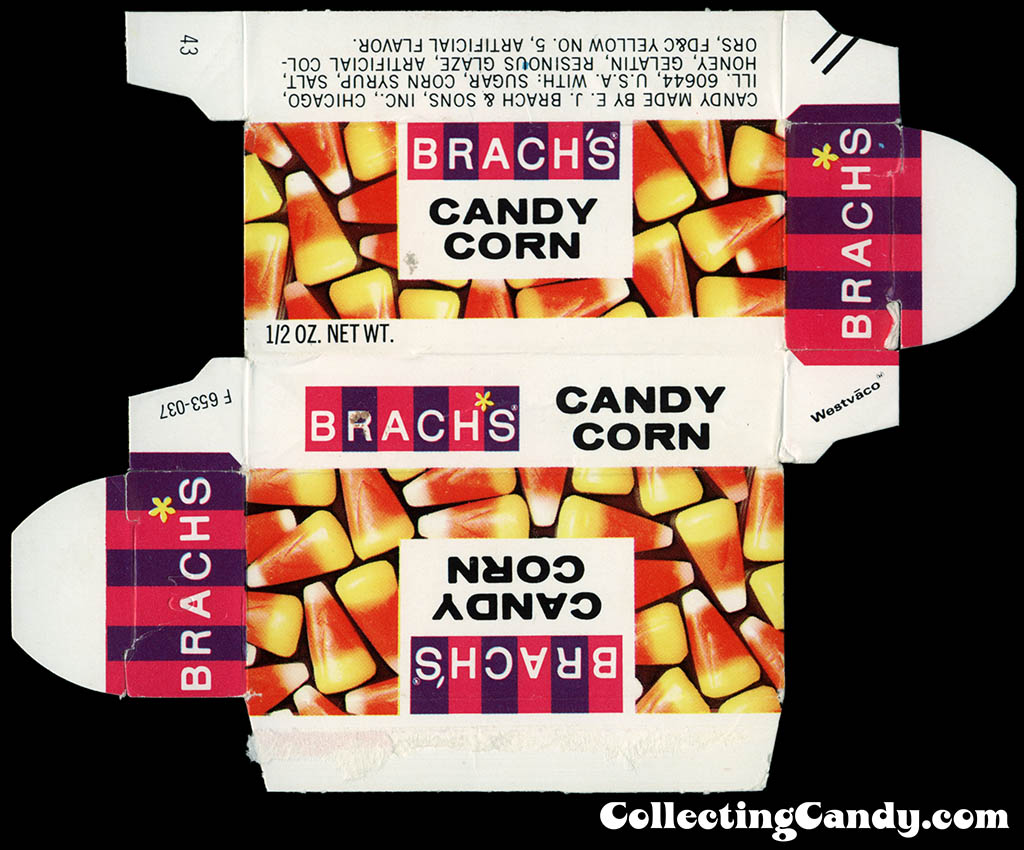 Referencing that 1971 Brach’s Halloween article from earlier this month, you can see variations on the boxed candy corn theme, as they also offered Indian Corn:

Here are a few other Halloween items from that 1971 Brach’s sales folder I wanted to include today: 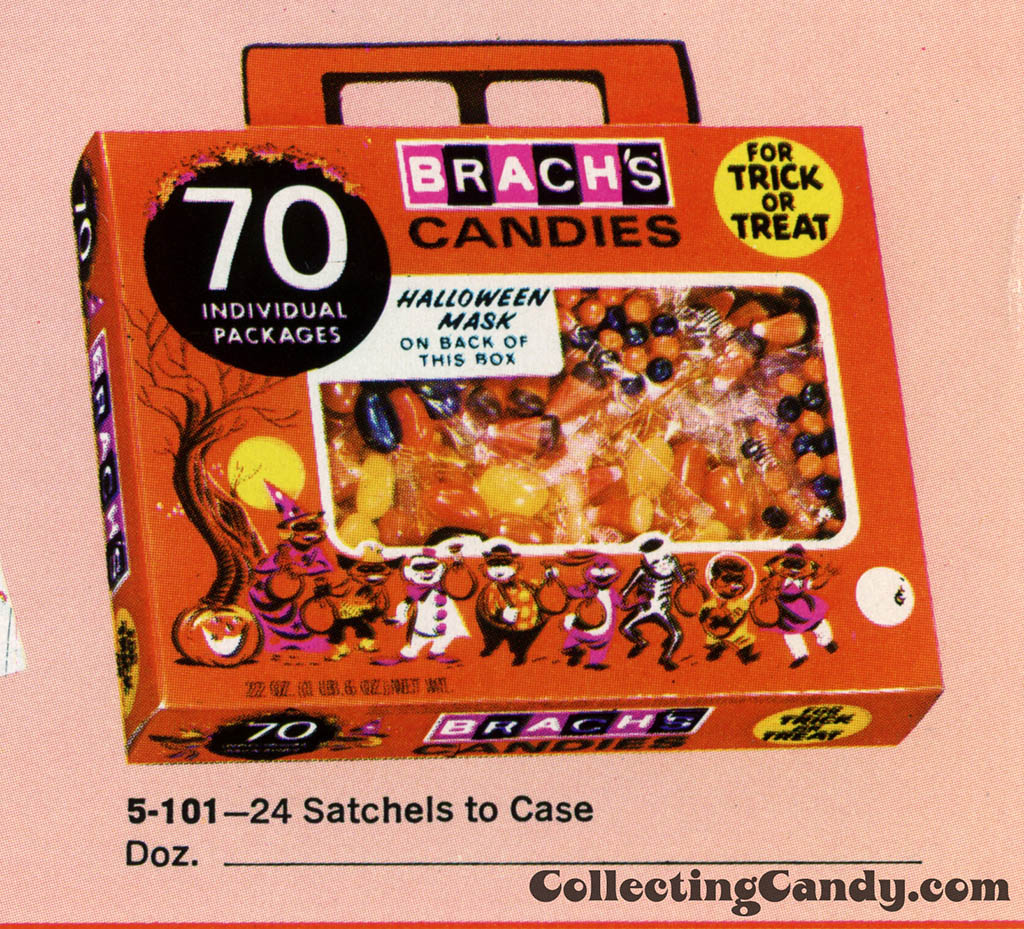 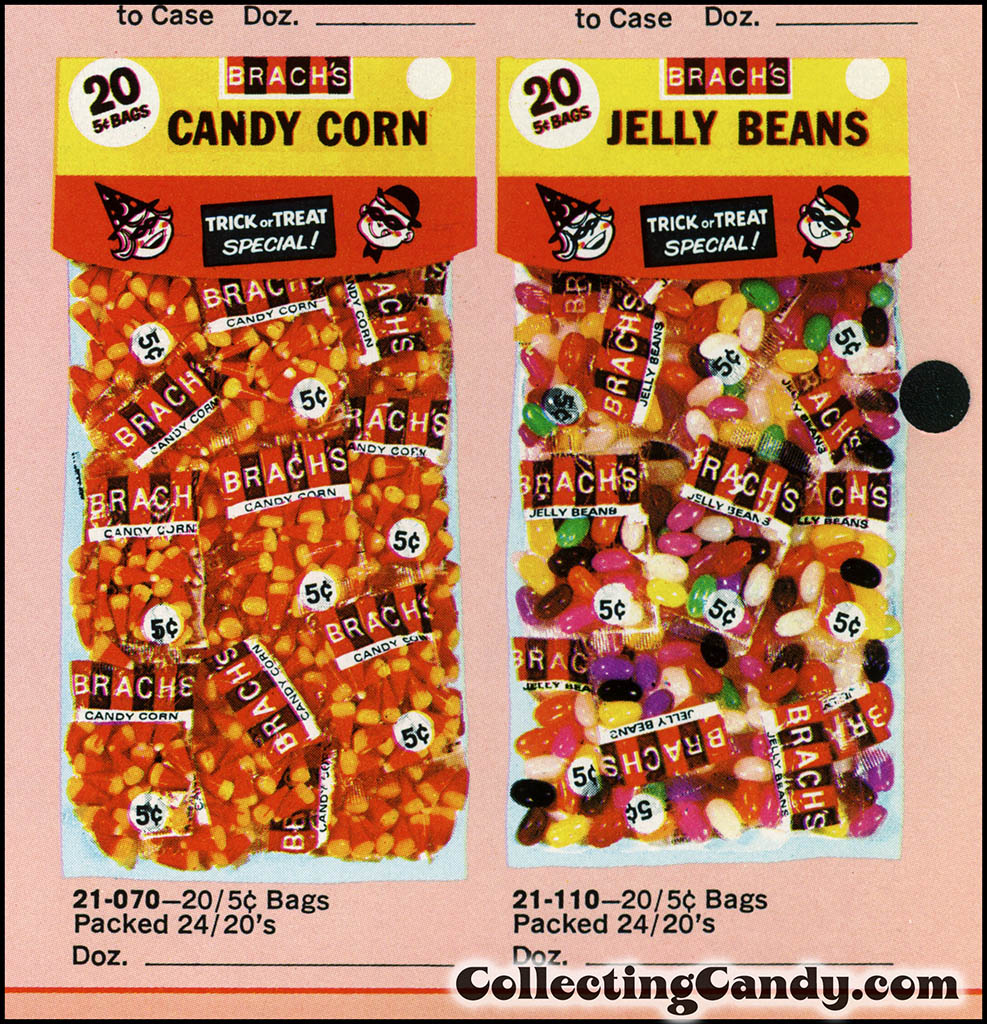 By the late 1980’s, Brach’s packaging would get a then-modern overhaul, as you can see on this next piece of Halloween packaging: 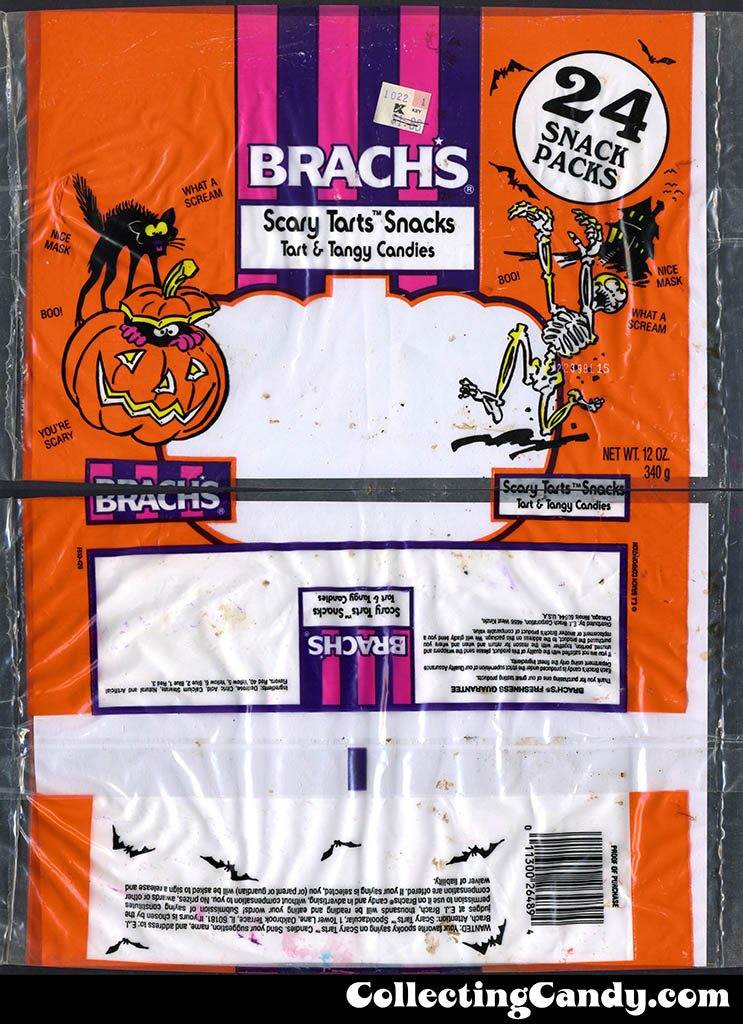 From here, we will jump forward to the early 2000’s as I have no pieces to showcase from the ensuing years.  For the moment, it represents a significant missing link in my research.

Next up is a group of Brach’s candy corn (and other) Halloween packages from a decade ago: 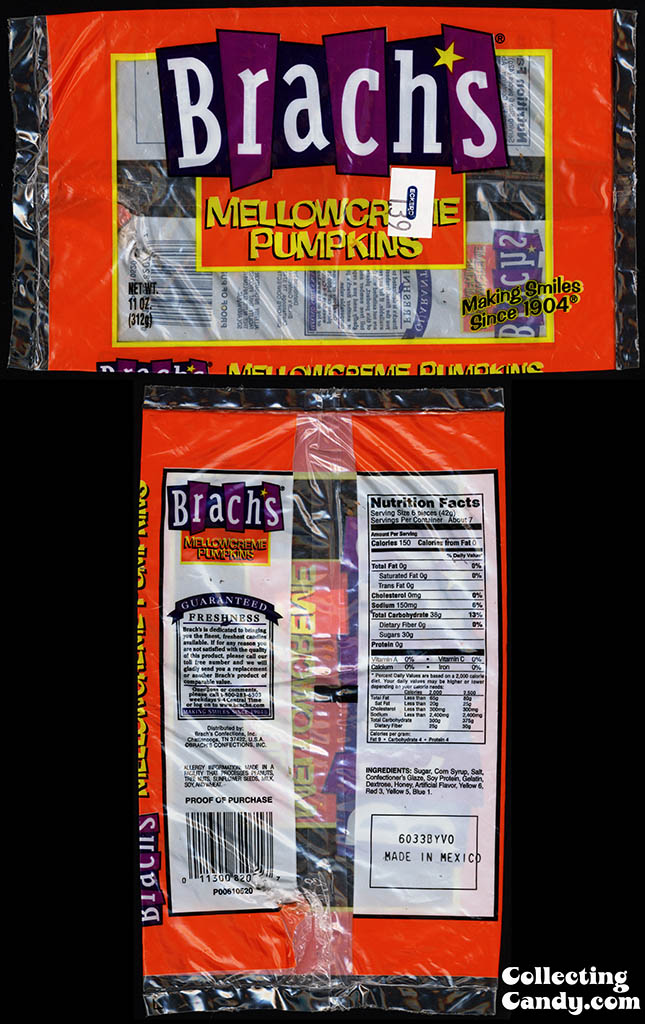 Even at this stage in Brach’s lifecycle, they had begun to play with the flavors of candy corn: 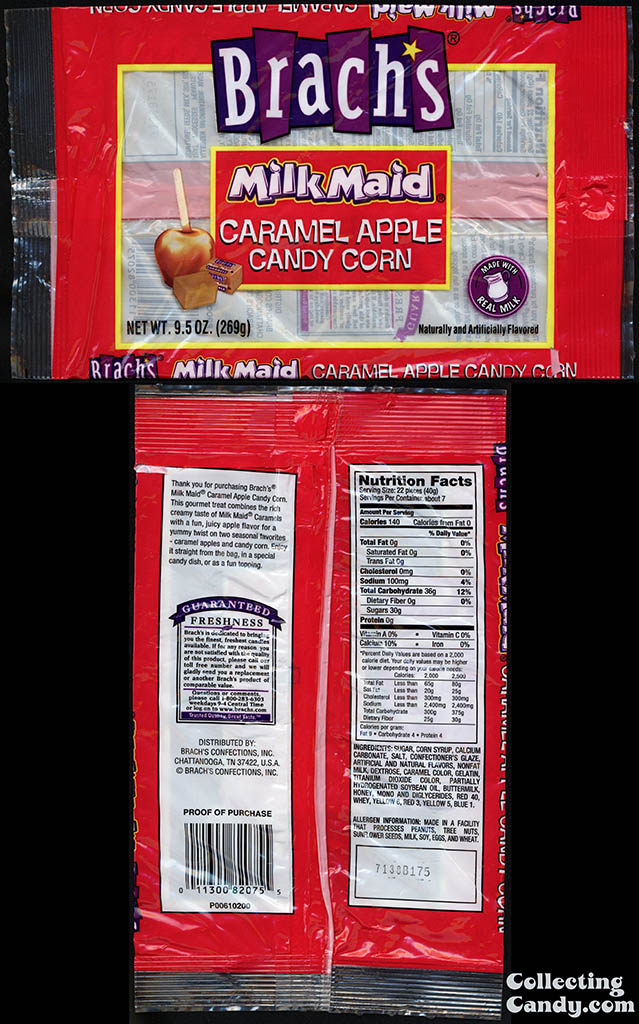 For the most part, Farley’s and Sathers would leave the look of Brach’s as it was, at least at first: 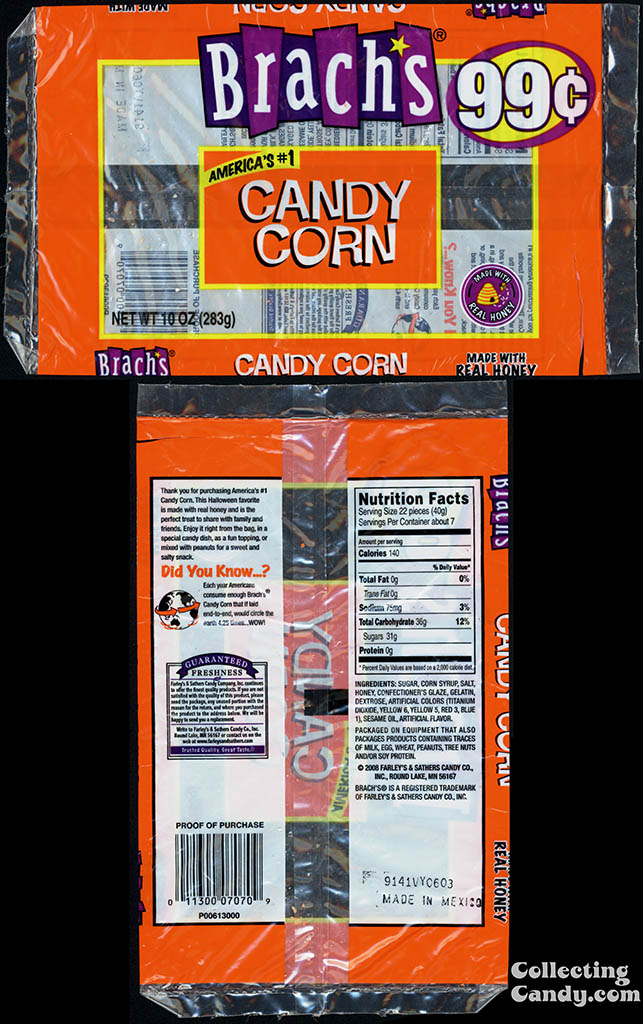 By 2010, Farley’s and Sathers had completely redefined the look of Brach’s packaging. Gone was any remnant of the alternating color, block letter-style logo that had been on Brach’s packages in some form or another since the 1960’s.  Instead replaced by a logo with a unified, ornate look and horizontal/diagonal lines.  Here’s an all-year-round Brach’s Candy Corn package that prominently features that redesigned logo:

They even introduced a scarecrow mascot for their Halloween seasonal product:

In 2012, Farley’s and Sathers would merge with Ferrara Pan to form the Ferrara Candy Company.  In 2013, Ferrara Candy would release a full-lineup of Halloween product featuring tweaked designs from the most recent Farley’s and Sathers versions.  An emphasis would be put on how the candy corn was “made with real honey”, and the fanciful scarecrow mascot would be nowhere in sight:

2013 also saw the release of a pretty wide range of flavors, some of which were brand new that year: 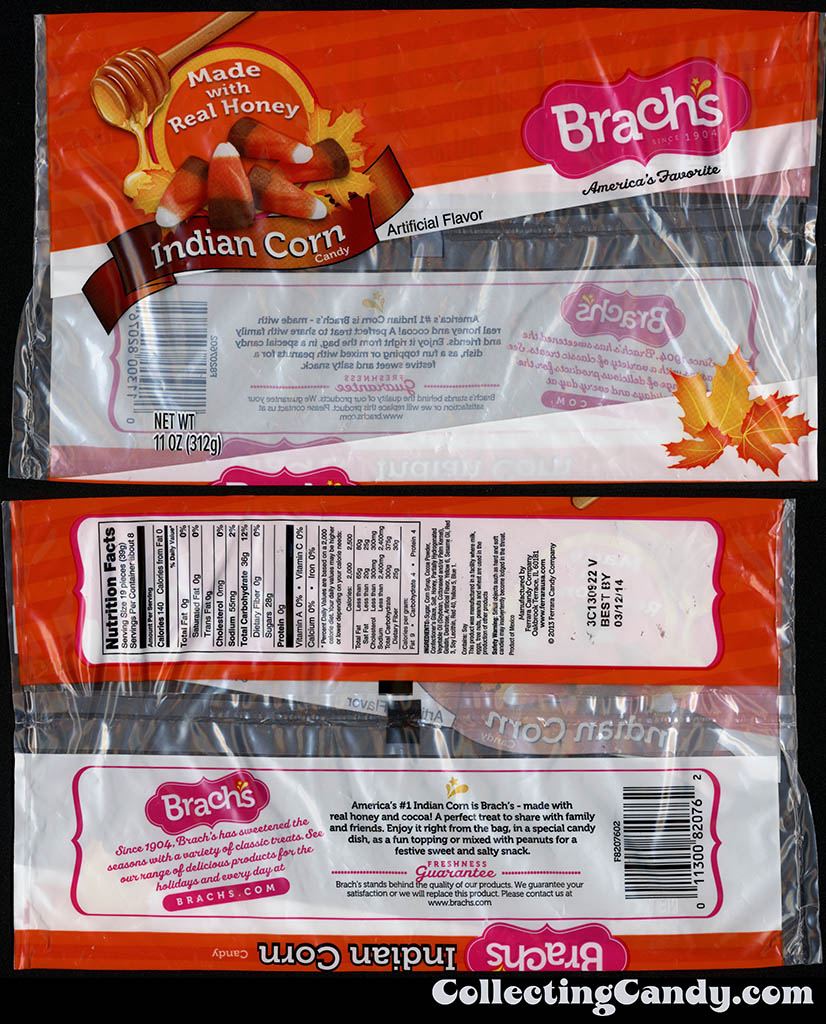 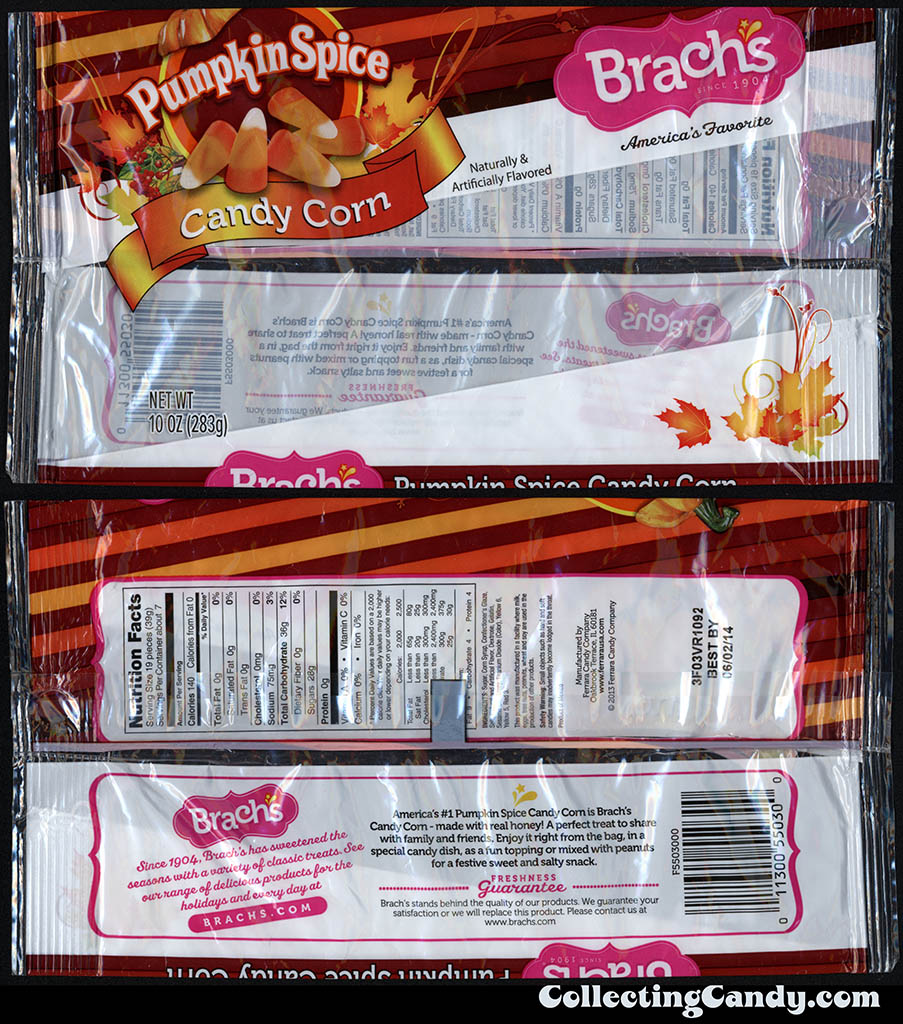 By 2014, Ferrara Candy Company was ready to put its stamp on the Brach’s brand and they did so by giving it a complete packaging overhaul and refresh.  But while the packaging design is new and modern, it evokes the brand’s heritage by bringing back a block-style logo similar to the one that was so well-loved, for so long.  I am a HUGE fan of this new Brach’s look – check it out: 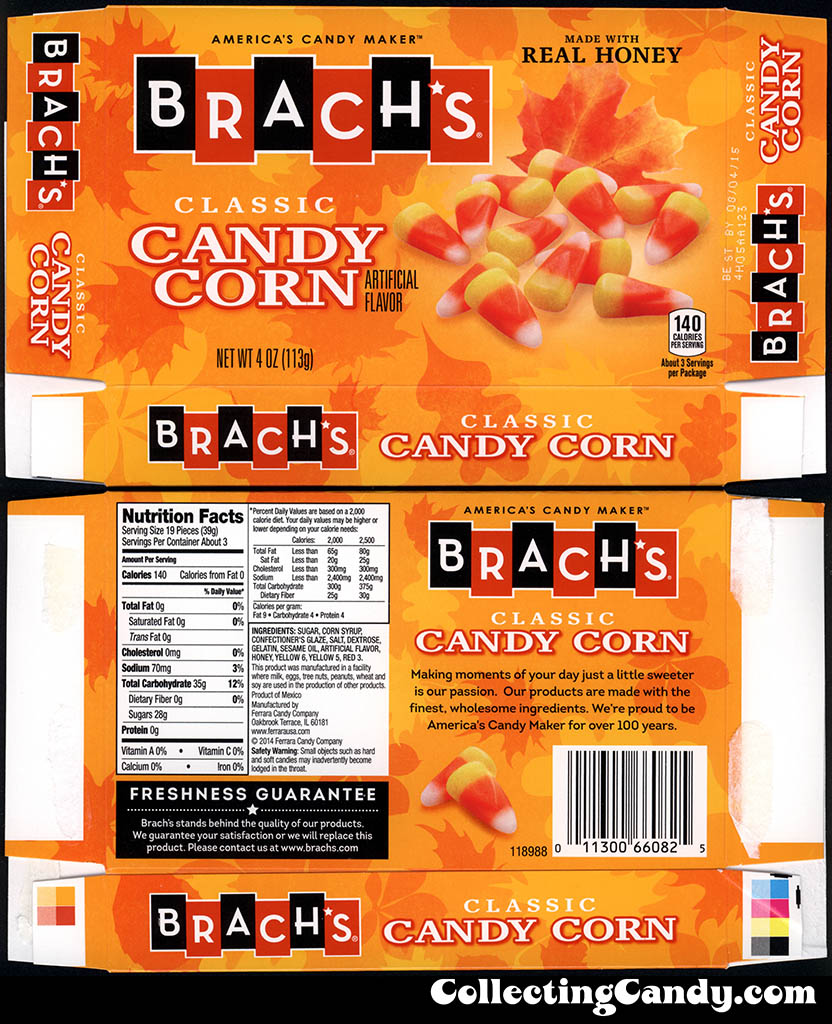 Of course the whole lineup of candy corn flavors are also back, along with at least a couple new additions. 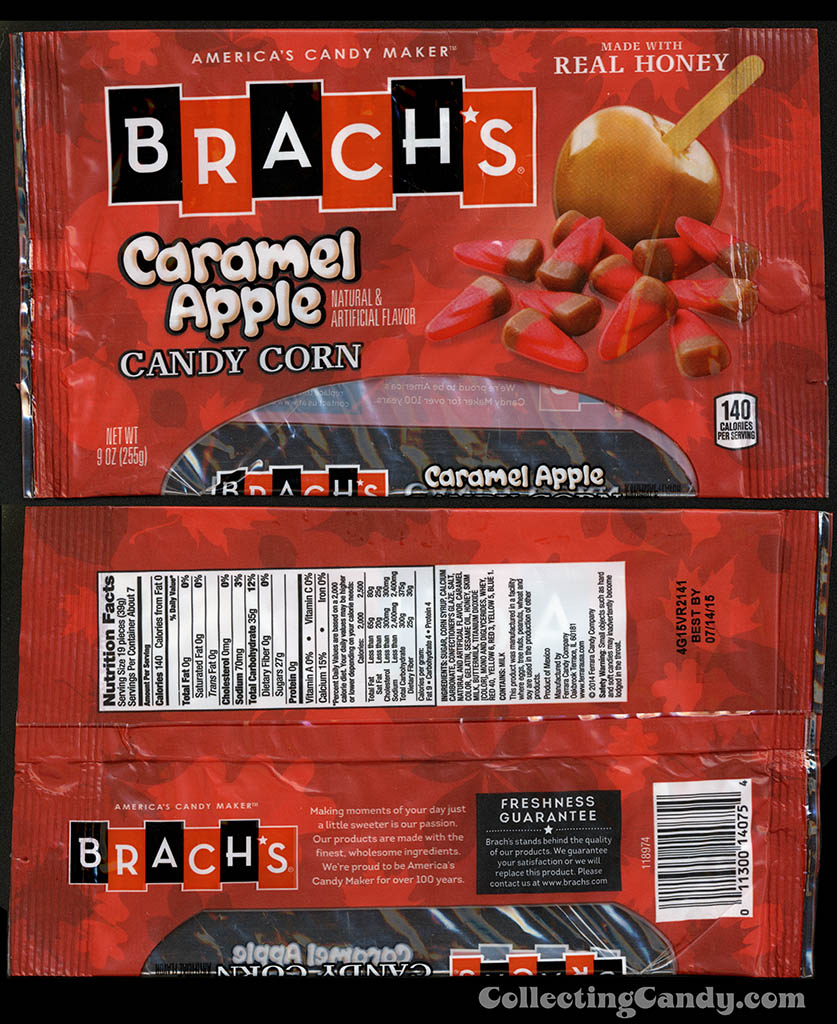 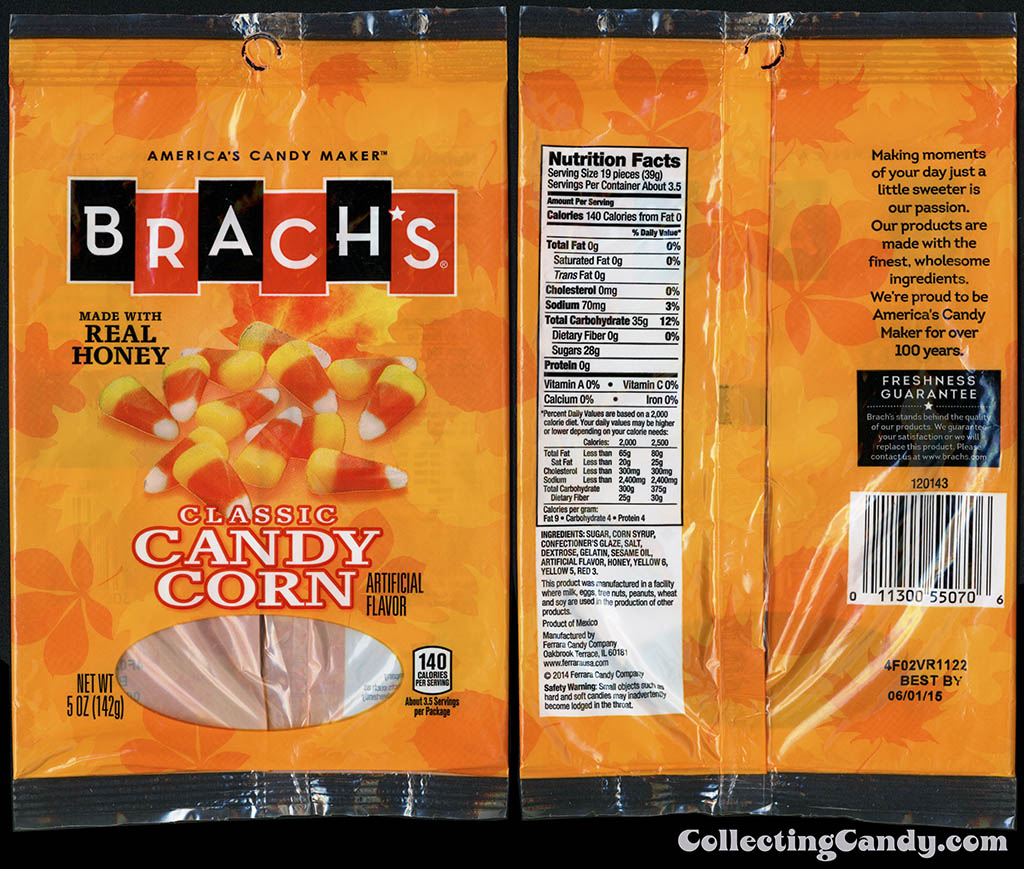 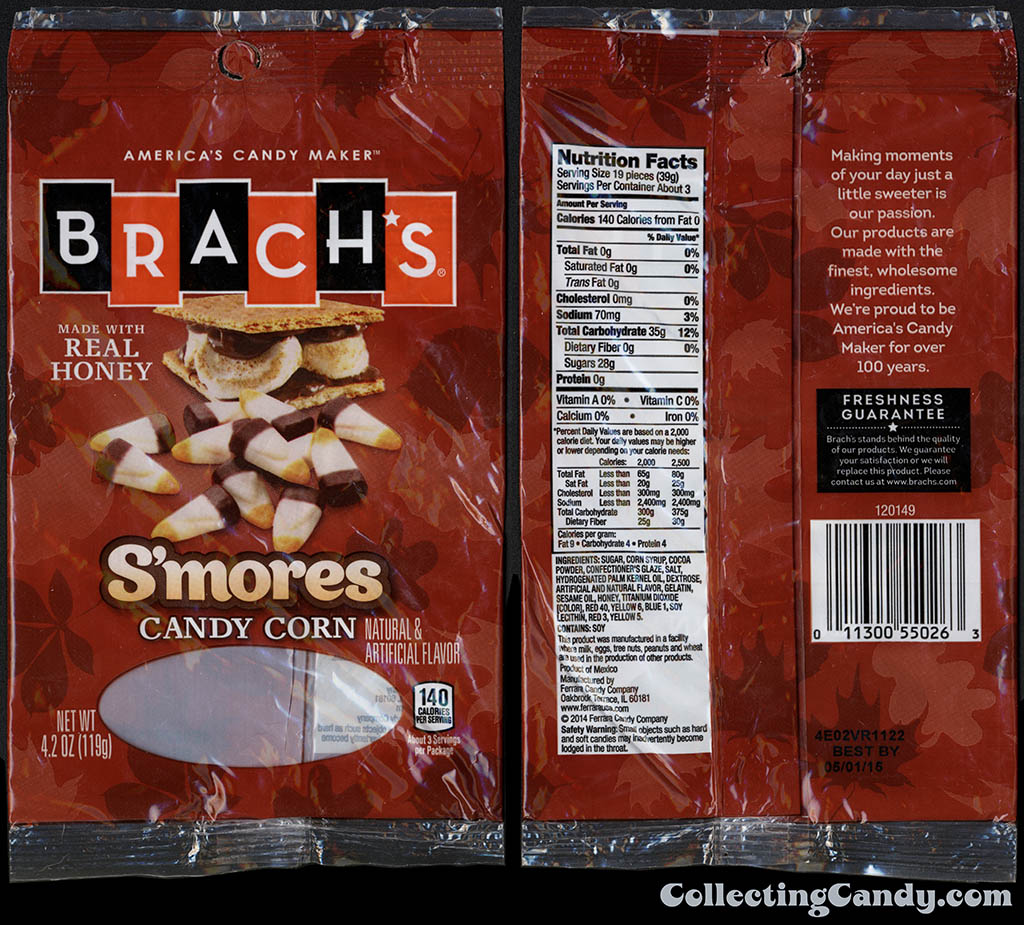 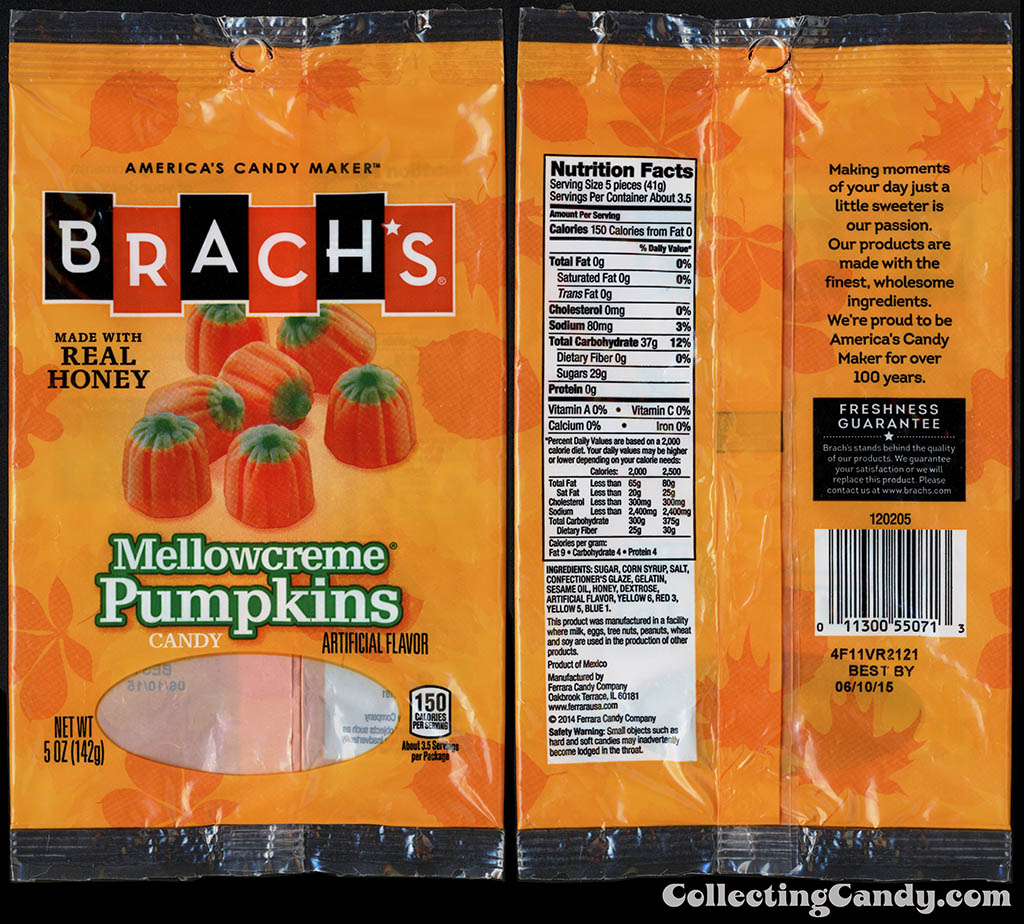 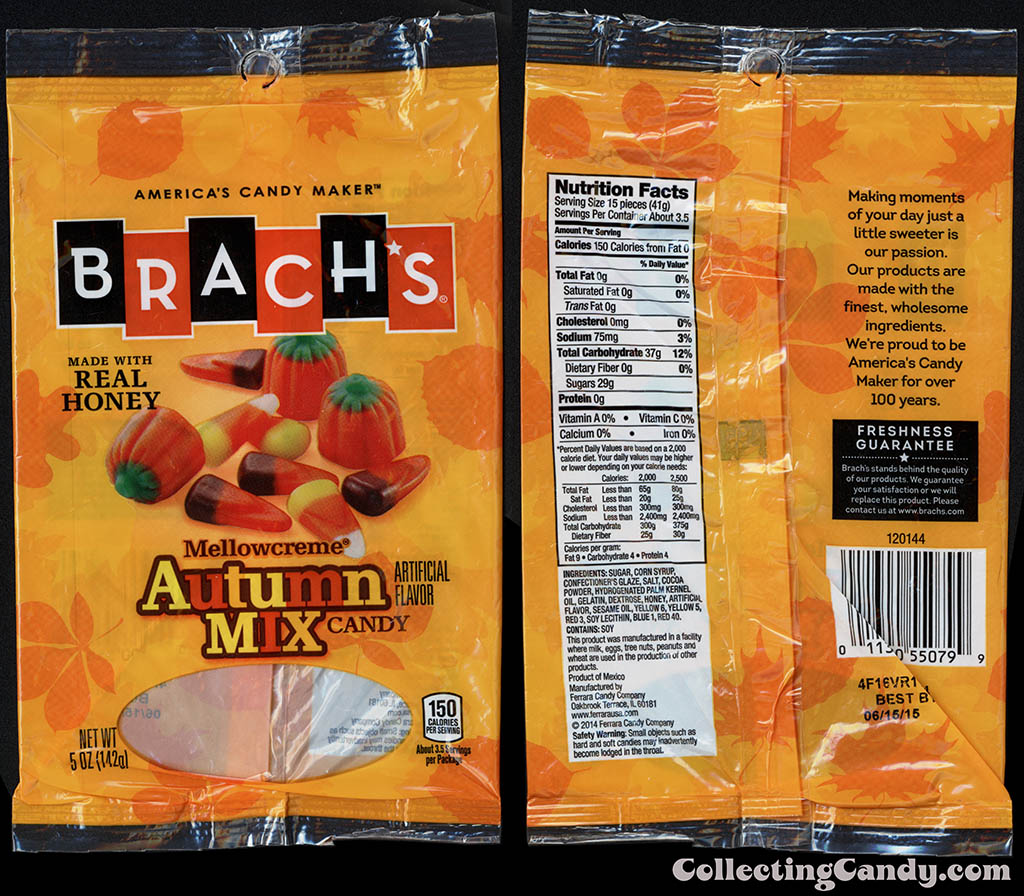 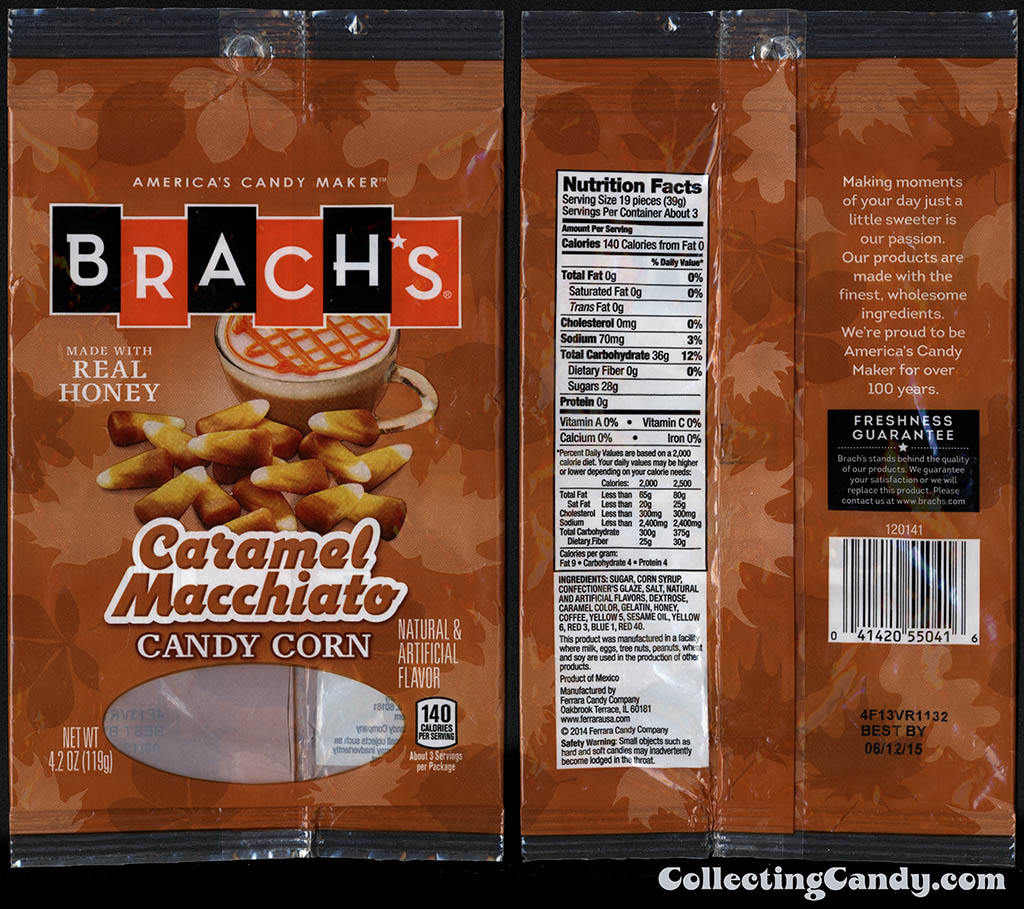 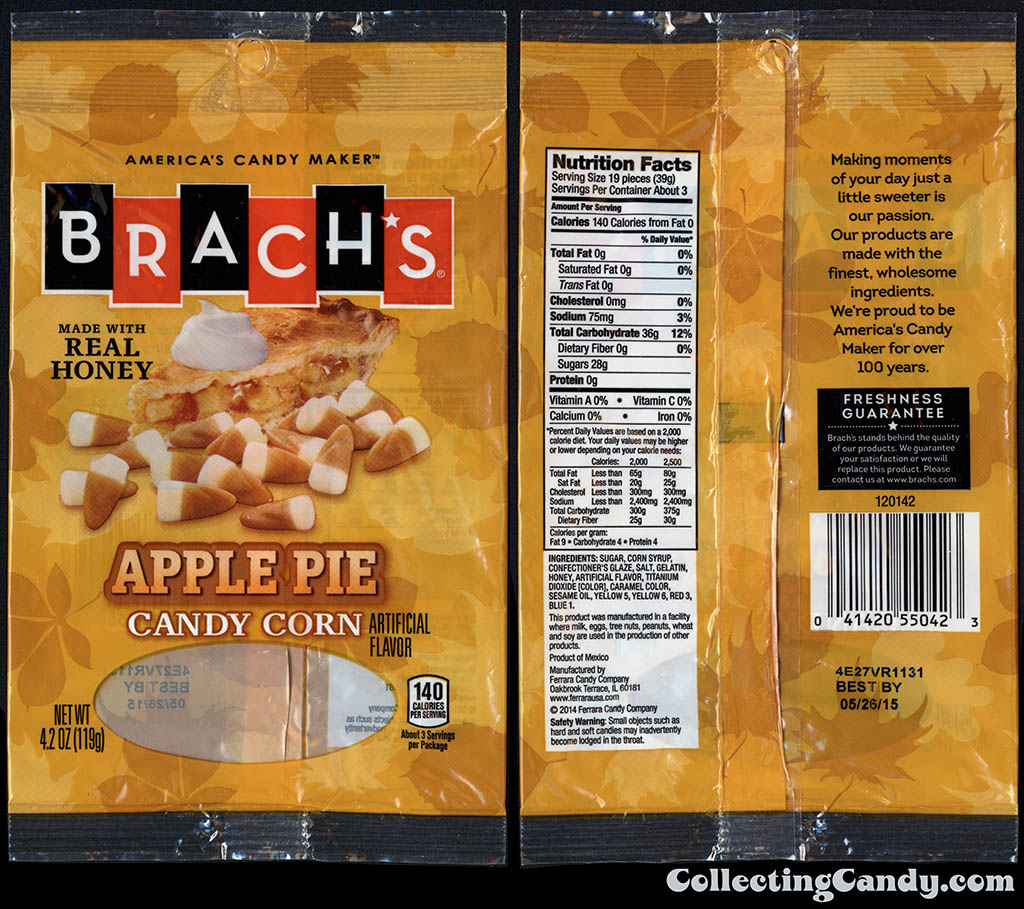 I think those look dynamite and in my opinion are a the best-looking Brach’s packages that have been on shelves in years.  They really nailed it bringing back some of the classic block letter styling in the new logo. 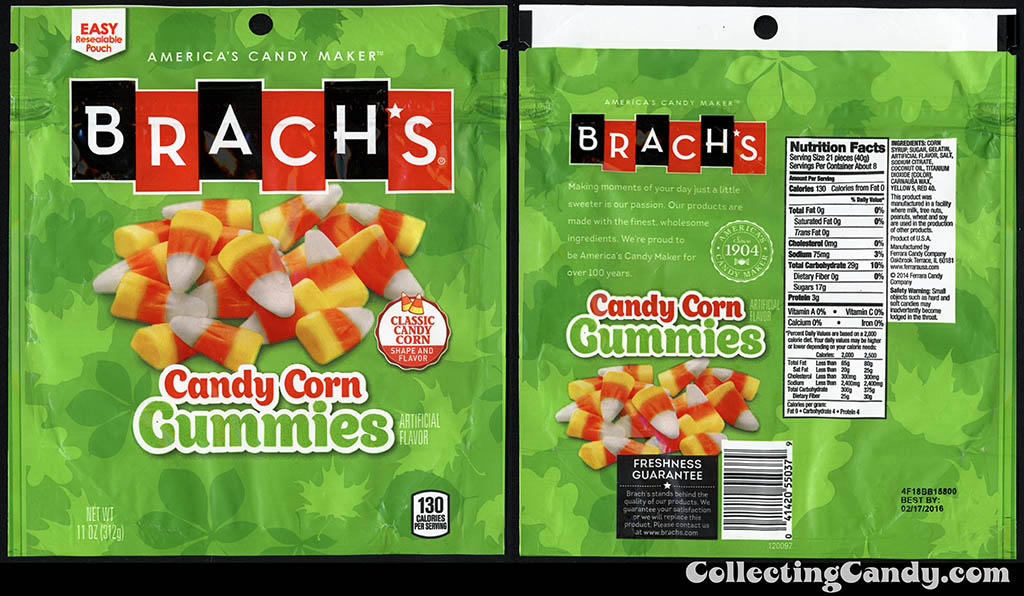 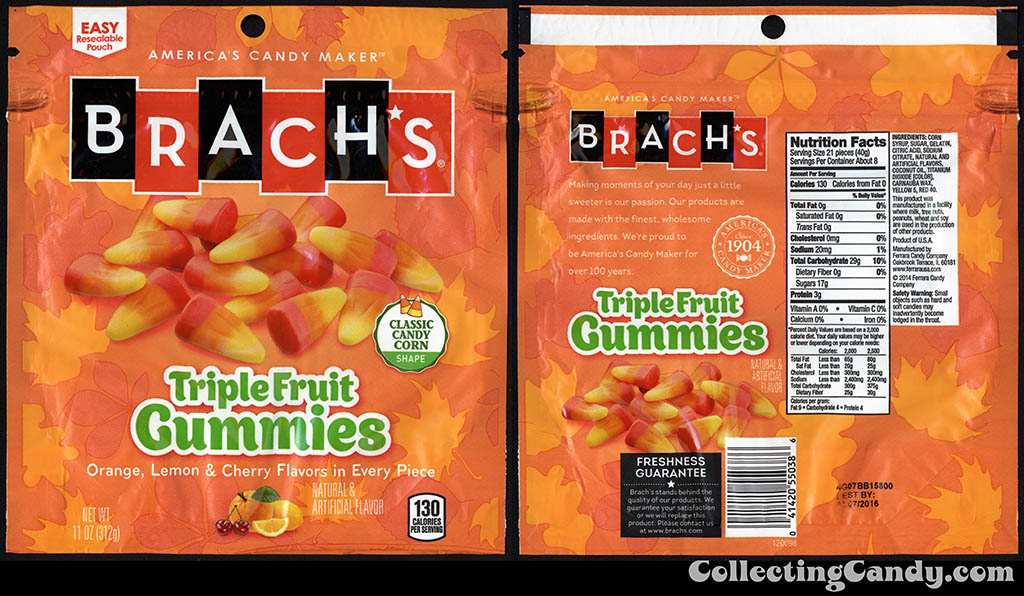 So that’s the Brach’s Candy Corn story from 1953 all the way through to today (as much of it as I’ve uncovered thus far, at least).  The Brach’s brand history is pretty fun stuff and with a refreshed look I think it is poised to hit new heights going forward.

One final package I wanted to share for today’s post is not candy corn related, but is part of Brach’s new seasonal assortment.

It’s a special flavor of Brach’s Royals – Caramel Apple.  Now, I’ve tried a LOT of caramel apple confections and other products this year, and none of them hit the note as well as these Caramel Apple-flavored Royals.  I really dig these:

And that’s everything for today’s post.  It was a long haul but one I hope you enjoyed checking out.  See you next time!

A New York City based writer, editor and sometimes actor. After spending much of the 1990′s in the comic book business helping tell the stories of Marvel Comics’ X-Men as series editor, he has since split his time between developing his own entertainment properties while still consulting and working on others. Having been described as “the Indiana Jones of lost and forgotten candy”, Jason is one of the country’s premier candy collectors and historians with his discoveries appearing in countless blogs, magazines, newspaper articles, and books. Always happy to share his knowledge and unique perspectives on this colorful part of our popular culture, Jason has consulted with New York’s Museum of Food and Drink and has also been a featured guest on Food Network’s Heavyweights, France’s M6 Capital, and New York’s TheActionRoom.com. My Google Profile+
View all posts by Jason Liebig →
This entry was posted in 1950's, 1960's, 1970's, 1980's, 1990's, Boxed, CountdownToHalloween, Gummies, Halloween, Holiday and tagged Brach's, candy collecting, candy collection, candy collector, candy wrapper collection, candy wrapper collector, collectible, collecting candy, confectionery, confections, Halloween, packaging, packaging design, seasonal, sweets, vintage candy wrapper, wrapper. Bookmark the permalink.