Today I’m coming at the idea of Halloween candy and candy marketing a little sideways.   Rather than feature vintage packaging created specifically for the holiday, I’m going to showcase how Halloween has been used to promote all-year round versions of popular treats, which also allows me to feature those treats and a specific slice of our shared confectionery-past.

So make the jump to see what I’ve assembled around a Peter Paul Halloween newspaper coupon from 1978!

Newspaper coupons – in the day and age of smartphones and online shopping, they’ve become a bit antiquated.  But they’re also charming and hearken back to a time, not-that-long-ago, when folks would routinely clip these black-and-white coupons from the pages of their daily papers.

As a candy collector and historian, vintage clipped newspaper coupons can be especially fun to uncover as they not only reflect a simpler time in consumer marketing but they can also reveal previously unknown brands and promotions.

The coupon I’ll be sharing today doesn’t reveal anything particularly startling or previously unknown, though I still dig it.  I find its appeal to be that it’s a simple newspaper-clipped coupon promoting the all-year-round Peter Paul line, but using the then-upcoming Halloween holiday to do so.  Other than its general Halloween-ness, the biggest thing of note is that the clipping highlights that these five Peter Paul offerings contained “No Artificial Ingredients” in them.  Even as far back as 1978, people had started to concern themselves with such things.  Here it is:

Check out that dual-coupon design – it would appear that you could clip this for 15-cents off a multi-pack or 25-cents off a bag of snack-size minis, but you couldn’t clip both coupons, due to the crossover layout.  I think that’s a clever design and a great use of ad-space at the time.

When deciding to post this Halloween newspaper clipping, I pondered what else I might include to show along with it.  Since this is a Halloween ad/coupon promoting the all-year-round versions of Peter Paul’s bar lineup, I decided it was the perfect opportunity to showcase a set of wrappers from the same era.

I gathered together a “complete set” of wrappers to match the five bars the illustrated Jack-O-Lantern character is holding in the ad – and I was able to match them by the fact that they all have 20-cent printed-on-the-pack price tags.  While the ad is from Halloween 1978, these 20-cent wrappers were probably found on shelves a tad earlier – in 1976-1977, though many of them were still being sold with these same wrappers in 1978.  Here they are! 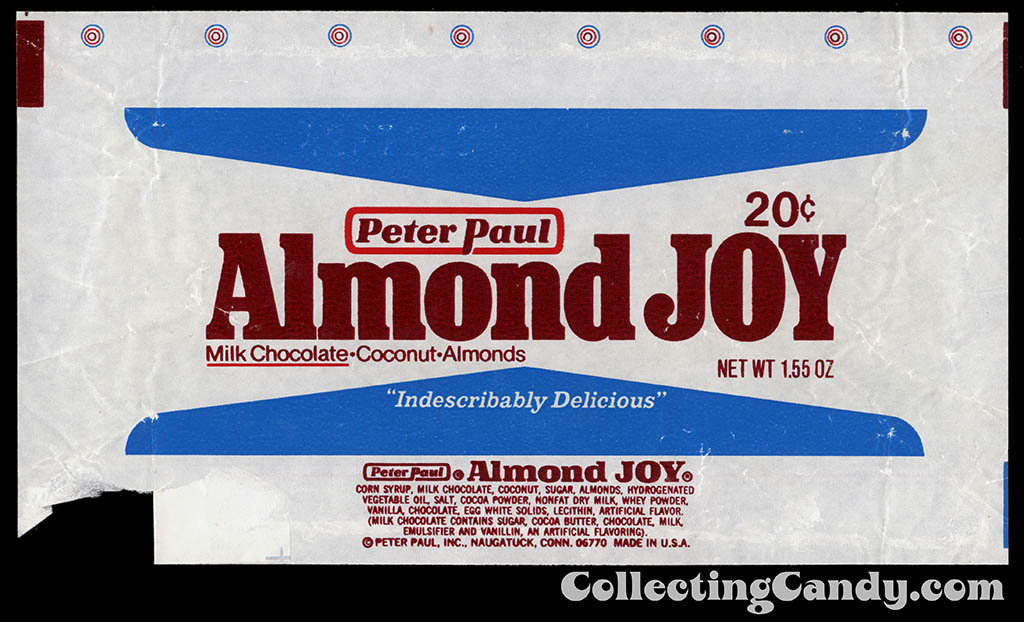 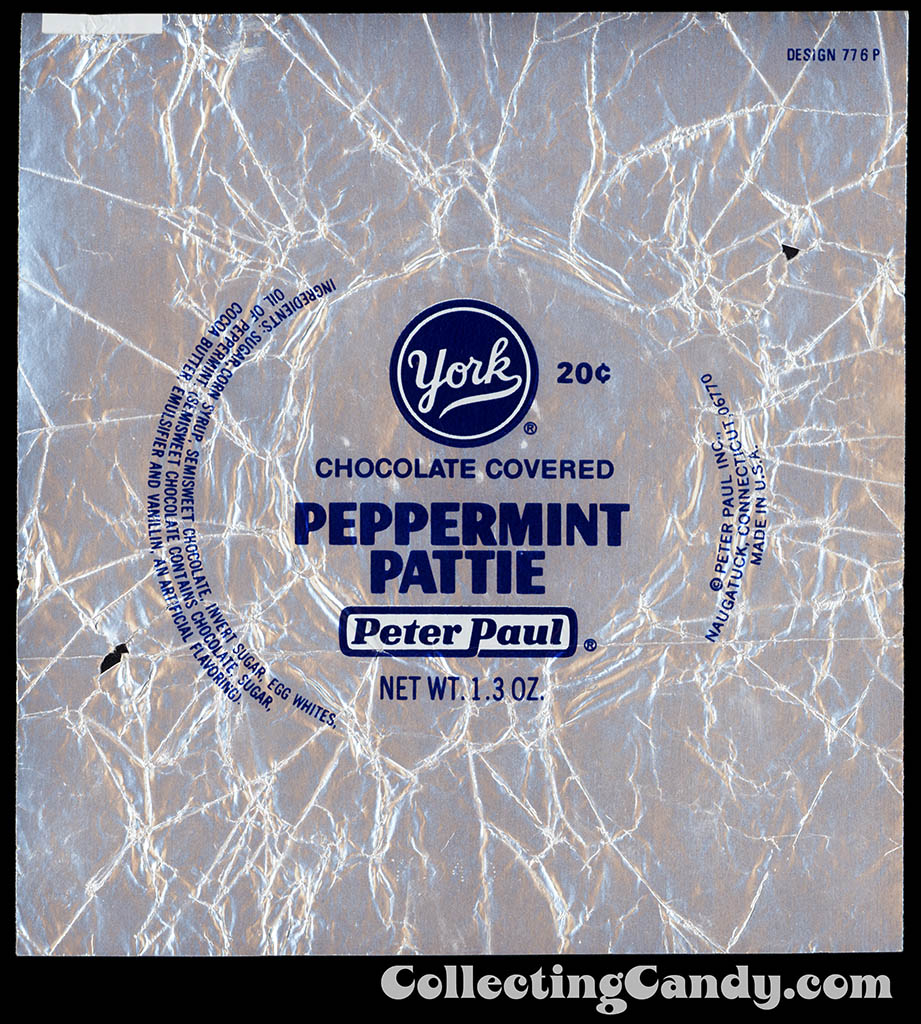 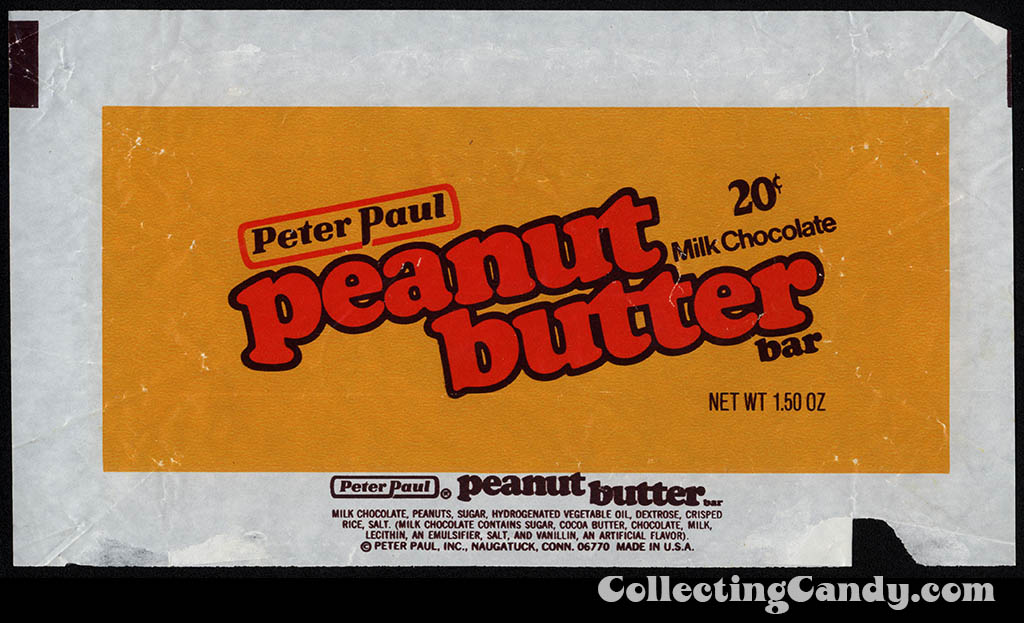 And finally, here’s a large multi-pack bag from the same era: 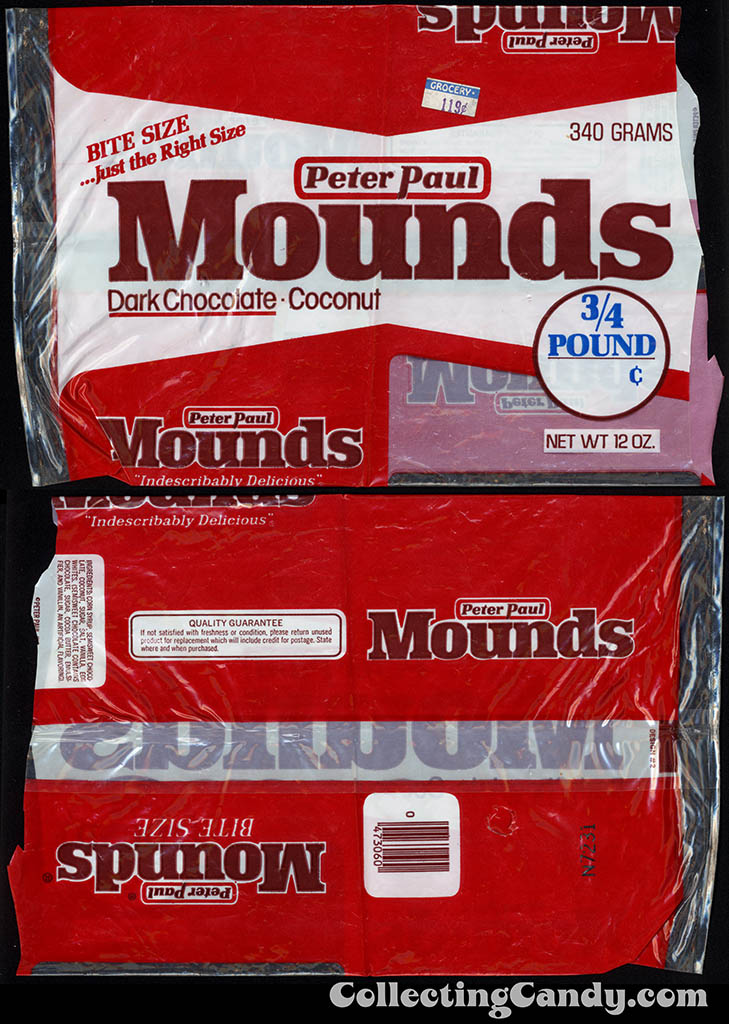 I think today’s Halloween newspaper clipping served as a great portal with which to visit the Peter Paul lineup of the late 1970’s.  And for me it invokes the always-happy thought of the houses who would give out full-size candy bars to lucky Trick-or-Treaters on Halloween.  Full-size bars on Halloween – I didn’t see too many of those as a kid.  They were near-mythical.

A New York City based writer, editor and sometimes actor. After spending much of the 1990′s in the comic book business helping tell the stories of Marvel Comics’ X-Men as series editor, he has since split his time between developing his own entertainment properties while still consulting and working on others. Having been described as “the Indiana Jones of lost and forgotten candy”, Jason is one of the country’s premier candy collectors and historians with his discoveries appearing in countless blogs, magazines, newspaper articles, and books. Always happy to share his knowledge and unique perspectives on this colorful part of our popular culture, Jason has consulted with New York’s Museum of Food and Drink and has also been a featured guest on Food Network’s Heavyweights, France’s M6 Capital, and New York’s TheActionRoom.com. My Google Profile+
View all posts by Jason Liebig →
This entry was posted in 1970's, Chocolate, CountdownToHalloween, Halloween, Hershey, Holiday and tagged 1970's, 70's, Almond Joy, candy collecting, candy collection, candy collector, candy wrapper collection, candy wrapper collector, collectible, collecting candy, confectionery, confections, Halloween, Mounds, packaging, Peter Paul, sweets, vintage candy wrapper, wrapper. Bookmark the permalink.

5 Responses to A Peter Paul Halloween Newspaper Coupon from 1978!