A Twizzlers Halloween Frankenstein for Friday!

Since it’s Friday, I thought it would be alliteratively appropriate to feature one of my favorite frightening fellows: Frankenstein.  And it just so happens that Twizzlers created a fantastic bit of Frankenstein’s Monster-laden packaging this year just for the Halloween holiday.

So make the jump to check out this year’s super-cool Frankenstein-themed Twizzlers Halloween package!

I gotta say, when I first spotted this new Halloween Twizzlers package on store shelves last month, I flipped.  Frankenstein’s Monster is one of my all-time favorites and anytime I see him portrayed on a candy package, it gets my full attention.  I’m also a fan of the Twizzlers campaign from the last couple years featuring all manner of things created out of the animated flavorful licorice twists, so for me this one was firing on all pistons. 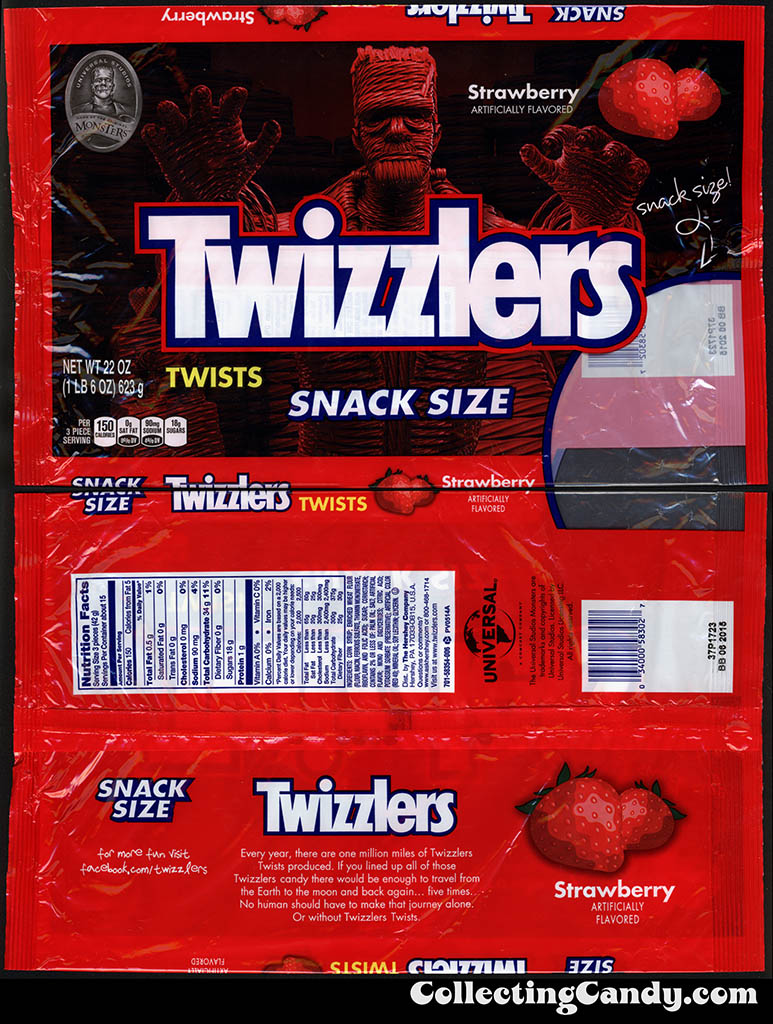 I should note that Hershey is using the licensed version of Universal’s Frankenstein’s Monster – as indicated by the official symbol featured on the front of the pack:

The approach of creating the Frankenstein Monster graphic from out of  Twizzlers themselves is one that Hershey has been using for the past year or two on its television campaign.  I think it’s incredibly inventive and awfully appealing from a visual standpoint.  They’ve done stuff with it in the commercials I never would have expected – and I was especially surprised and delighted by their Star Trek spot.

This is the first time I’ve seen the made-out-of-Twizzlers approach put to use on actual Twizzlers packaging, but I hope it’s just the beginning.  I’d enjoy seeing them do more packages using this stylistic approach.

Here are a trio of Twizzlers commercials from the past two years that utilize the same cool Twizzlers-as-everything construction:

I think those spots are pretty amazing, don’t you?

And that’s everything I’ve got for today.  A short post for this first Friday of our 2014 Halloween Countdown, but one I hope you enjoyed.  See you next time!

A New York City based writer, editor and sometimes actor. After spending much of the 1990′s in the comic book business helping tell the stories of Marvel Comics’ X-Men as series editor, he has since split his time between developing his own entertainment properties while still consulting and working on others. Having been described as “the Indiana Jones of lost and forgotten candy”, Jason is one of the country’s premier candy collectors and historians with his discoveries appearing in countless blogs, magazines, newspaper articles, and books. Always happy to share his knowledge and unique perspectives on this colorful part of our popular culture, Jason has consulted with New York’s Museum of Food and Drink and has also been a featured guest on Food Network’s Heavyweights, France’s M6 Capital, and New York’s TheActionRoom.com. My Google Profile+
View all posts by Jason Liebig →
This entry was posted in CountdownToHalloween, Halloween, Hershey, Holiday and tagged candy collecting, candy collection, candy collector, candy wrapper collection, candy wrapper collector, collectible, collecting candy, confectionery, confections, Frankenstein, Halloween, licensed, licorice, packaging, sweets, Twizzlers, vintage candy wrapper, wrapper. Bookmark the permalink.

5 Responses to A Twizzlers Halloween Frankenstein for Friday!