Howdy, everyone.  I’ve been doing a bit of traveling the past couple months which has kept me away from CollectingCandy.com more than I’d prefer.  But on the plus side, a lot of that travel has led to uncovering great historical confectionery information while also allowing me to shop for candy in locations I don’t normally get to, including the Dallas airport terminal.  Today I’d like to share a few pieces I picked up while on a layover last month – check out my Texas souvenir candy!

One of my recent destinations was the 2014 San Diego Comic Con with a flight that included a layover in Dallas, giving me some time to check out the local candy.  Well, maybe not the most authentic local confectionery offerings – this was the airport after all – a place that is its own unique world.

At a couple of the Dallas airport newsstands, I encountered large handle-bag packs of Hershey’s candy in what were labeled “Travel Retail Exclusive” packaging.  I would have liked to have gotten a sample of one of these packages for my collection, but it was simply too much extra candy to carry.  I did snap a picture, however, so I could share it today: 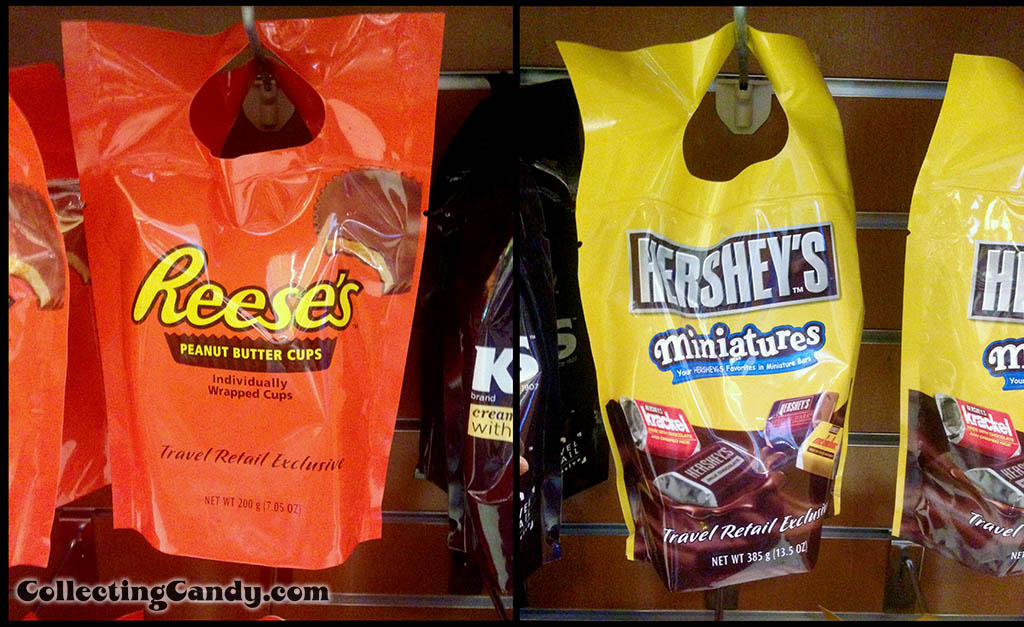 Not only that, but the Dallas airport terminal also featured a dedicated candy store chain I’d never encountered before – Natalie’s Candy Jar! 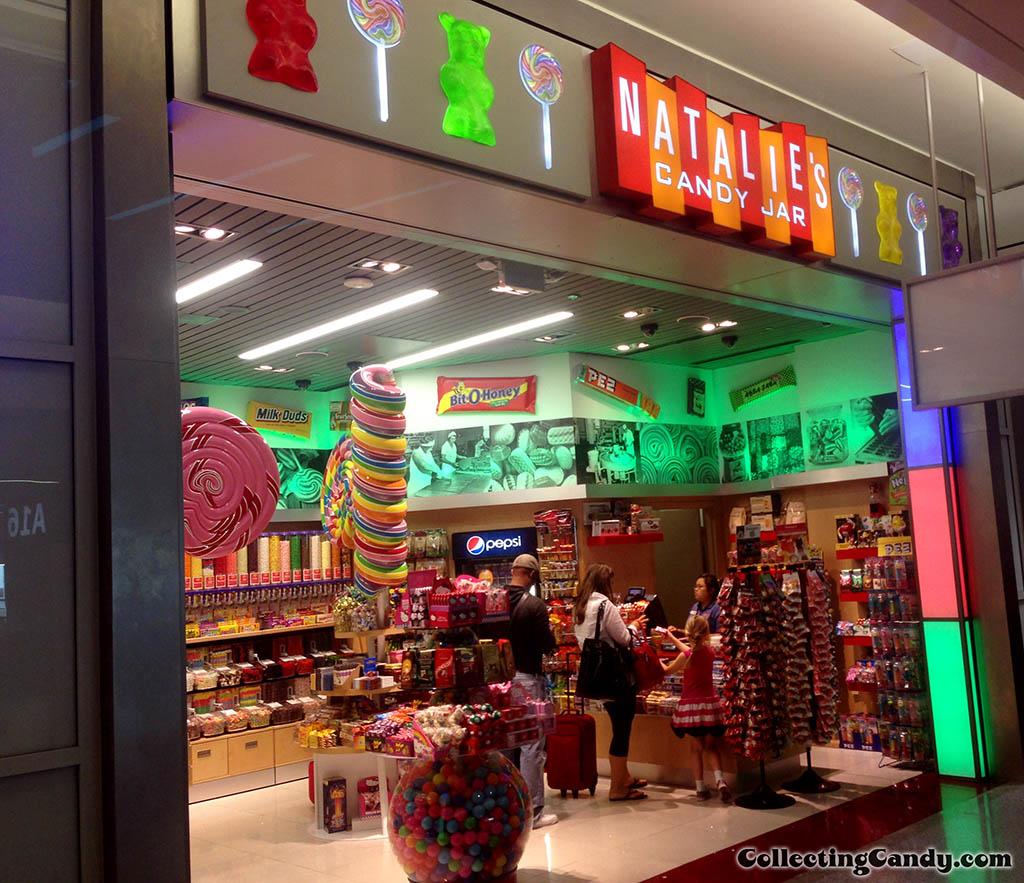 I picked up a few things at Natalie’s that I hadn’t tried before, and found the overall design and look of the place to be quite welcoming and colorful.  I dug it.

But I didn’t find today’s souvenir candy at Natalie’s – I found those spread out across a few other spots within the terminal.  At first, I only found these Texas Size Jelly Beans: 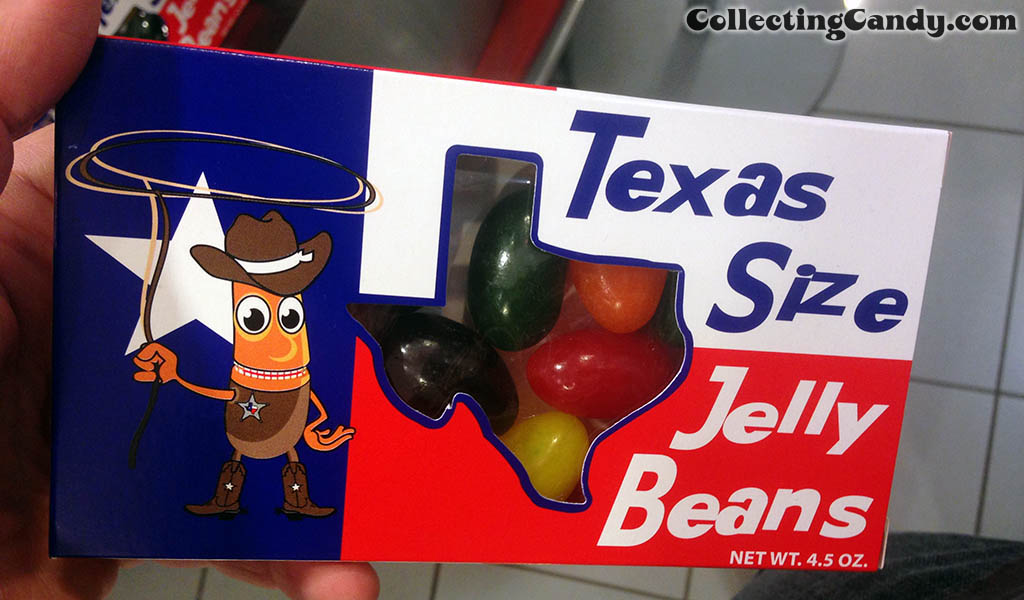 I wasn’t even sure I was going to buy these but when I found some of the other souvenir boxes at a different vendor, I realized they made up a fun assortment.  With in mind, I circled back and got all that I could find.  I came away with five different offerings in this series, all distributed by a company called “Lonestar”.  Here they are: 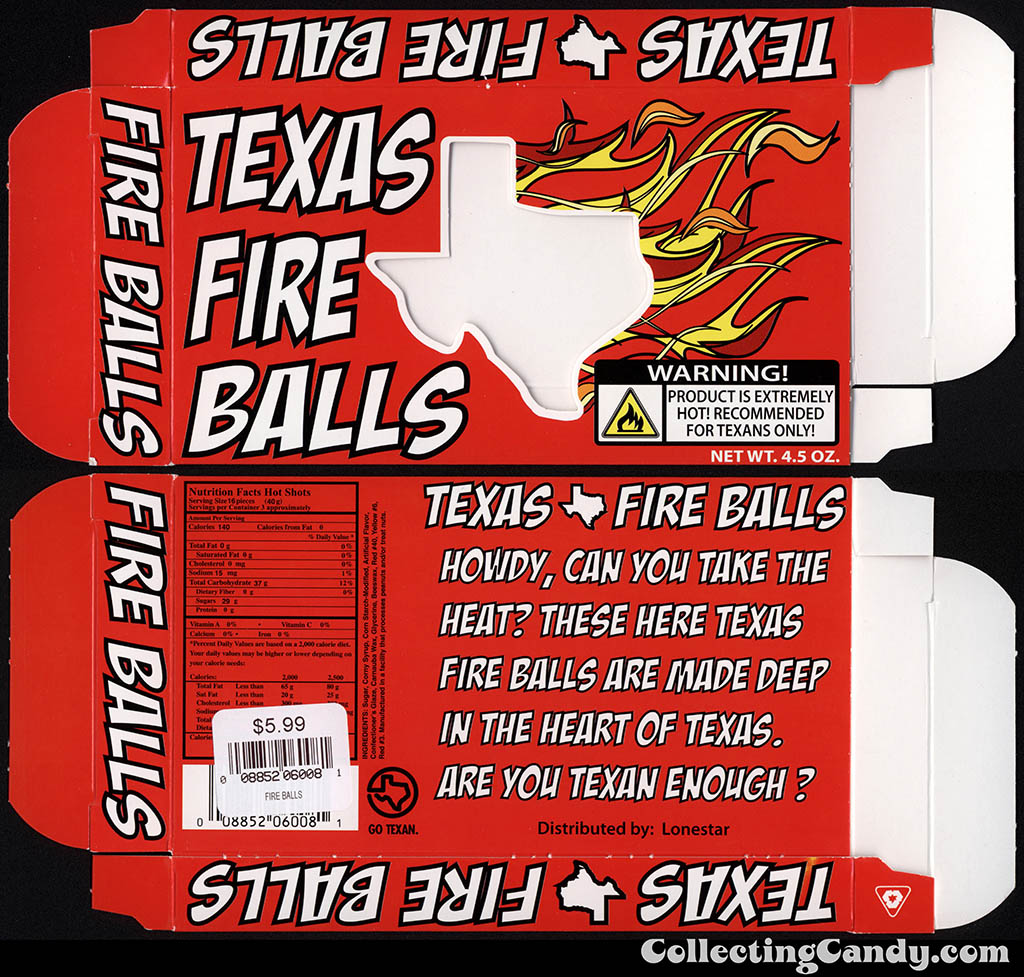 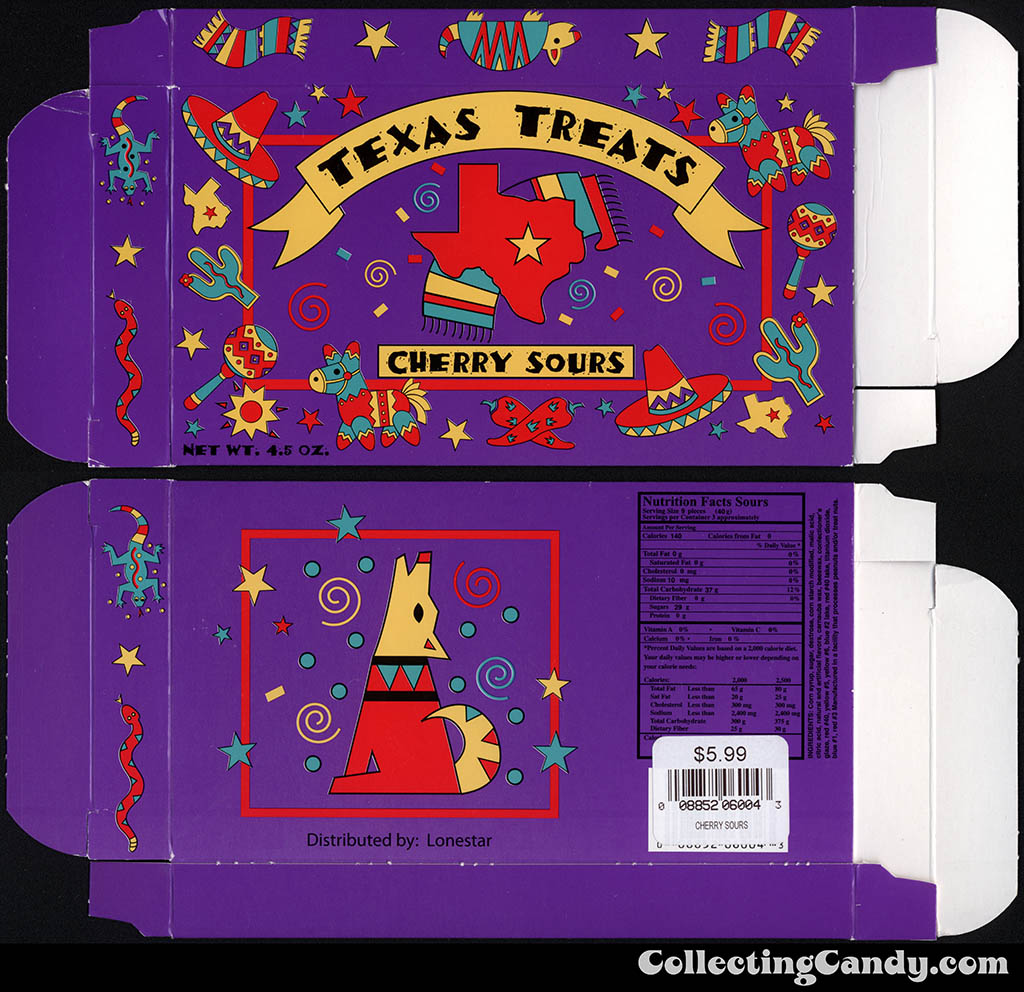 I especially like these next two boxes for Rattlesnake and Armadillo Candy Eggs as they offer a bit of educational information on the reverse of each box.  Reminds me of some of my favorite souvenirs acquired during childhood road trip vacations. 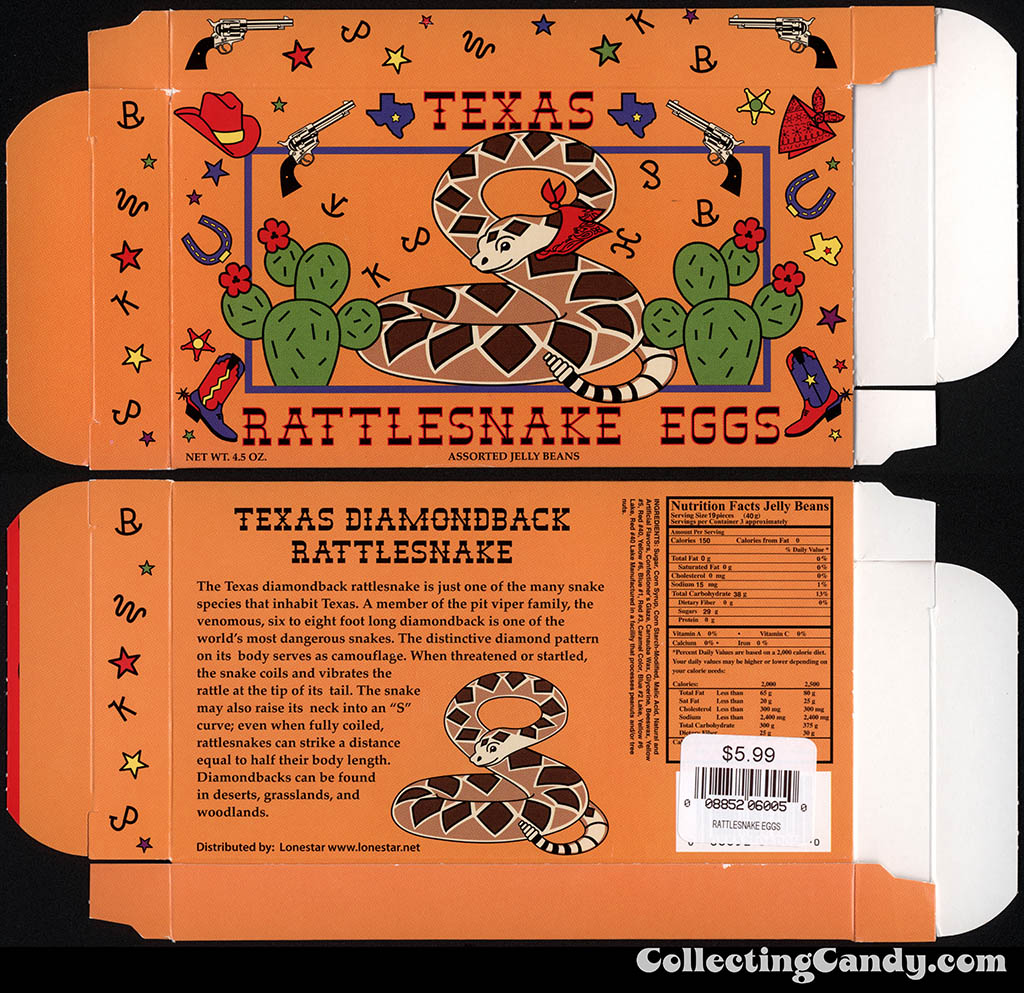 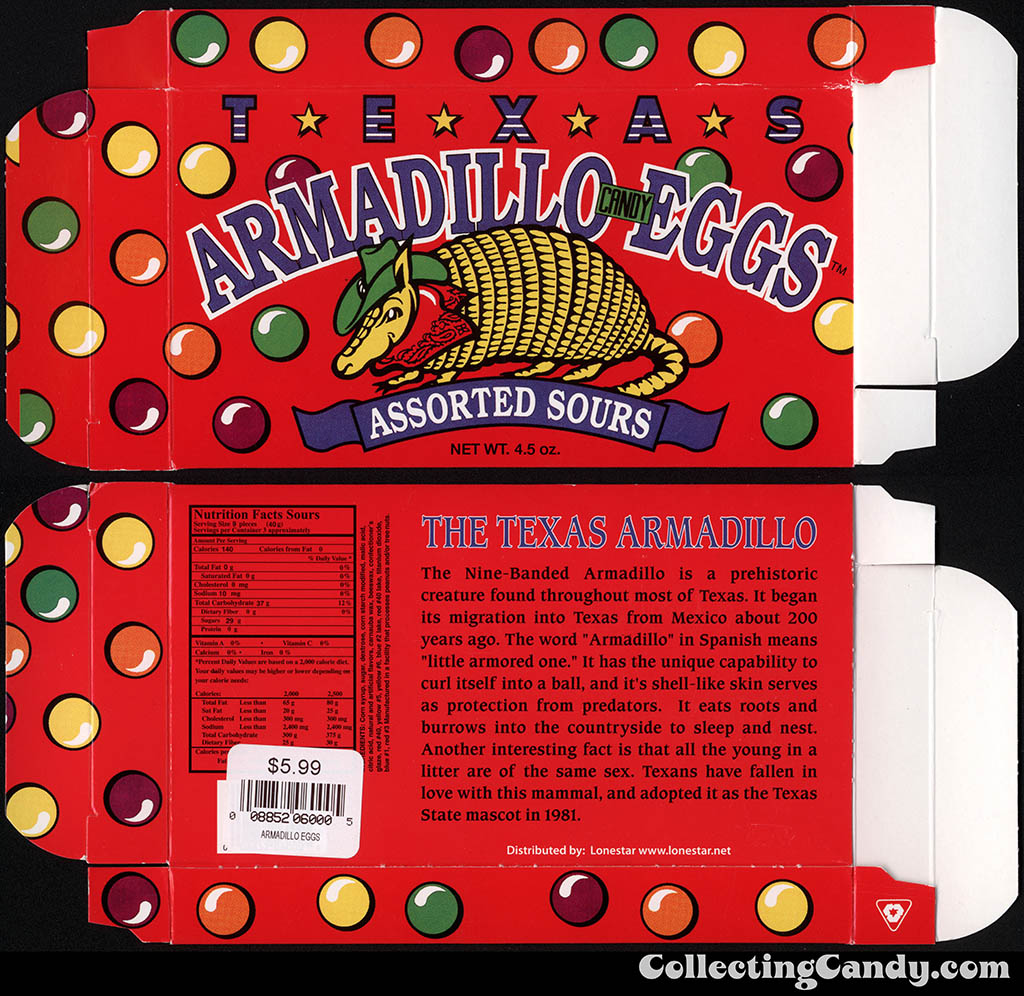 Those are all of the Lonestar-branded souvenir boxes I picked up.

I also found what I assume is a more traditional Texas confectionery offering from the Lammes Candies company – Longhorns (These remind me a lot of DeMet’s Turtles): 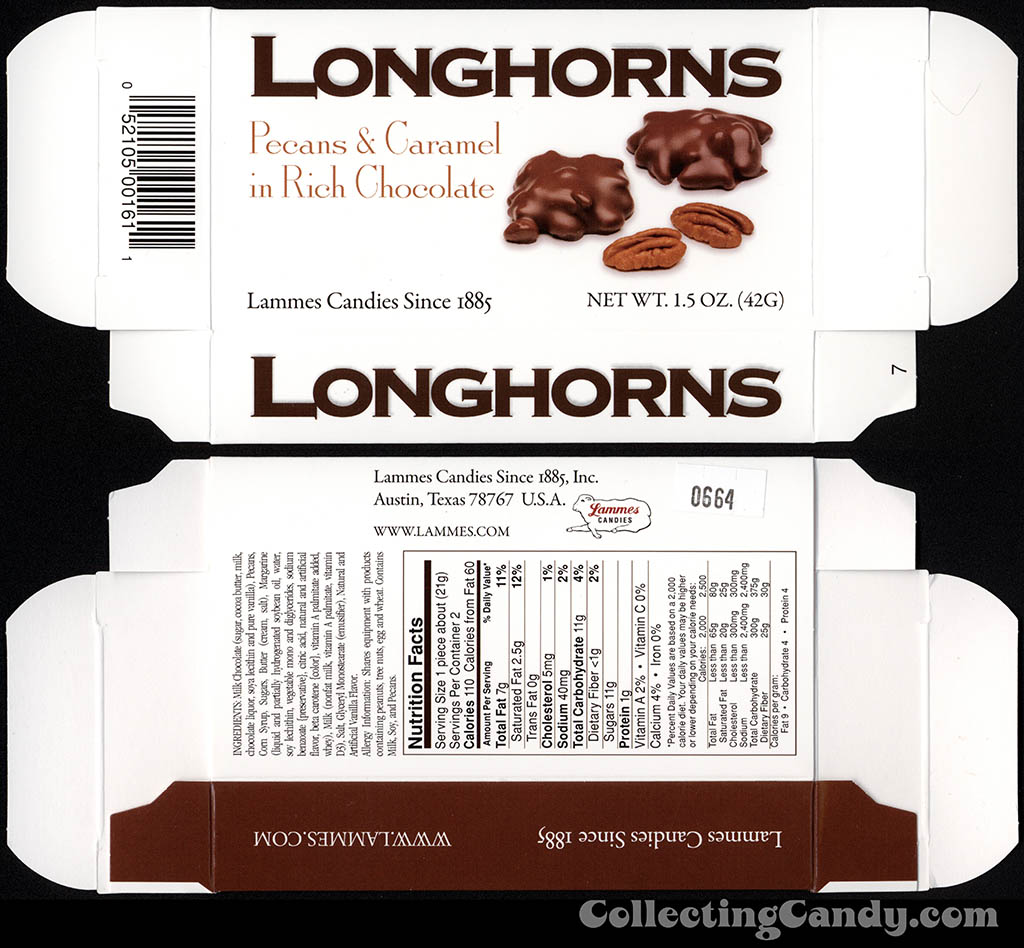 The last souvenir candy I picked up was a Texas chocolate bar, produced by the Paramount company.  Paramount Chocolates produces souvenir bars for sale all over the country.  I know I’ve got at least a couple New York City-themed bar wrappers in my collection produced by Paramount.  Here’s the wrapper for the Texas bar: 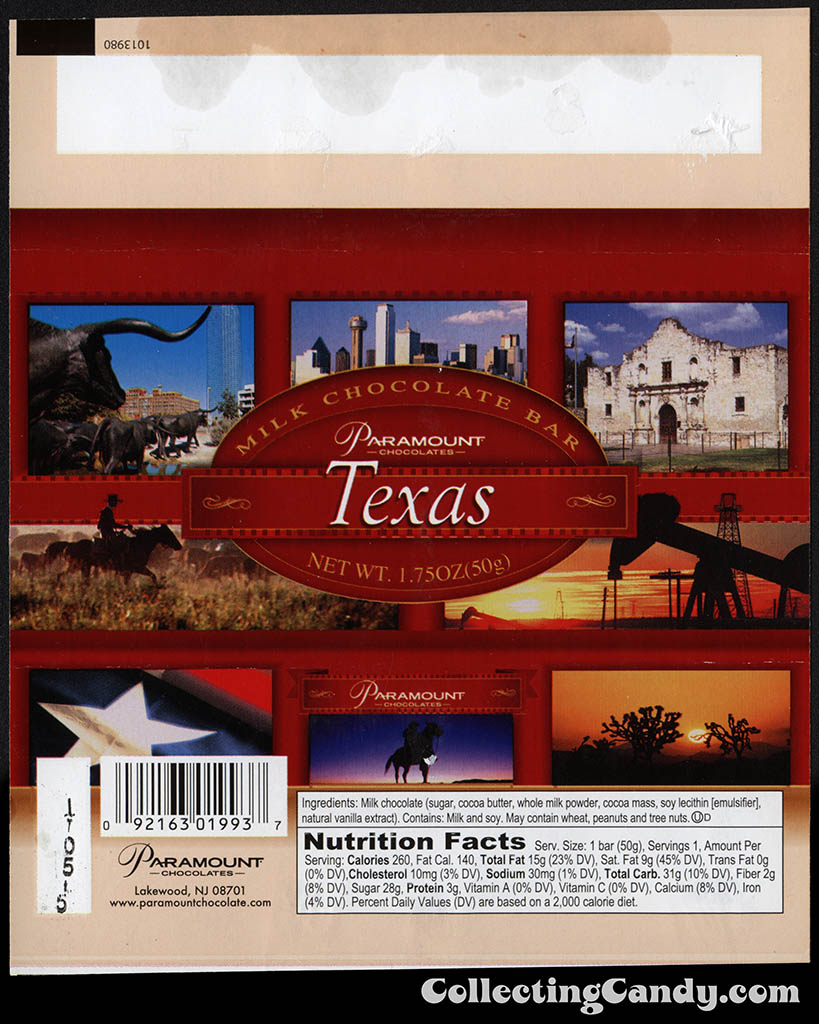 That’s what I picked up during my short-but-fruitful layover in Dallas.

There was one additional souvenir candy box I decided not to get, once again because I felt it was too big to fit into my already candy-stuffed carry-on baggage.  This one was for a product called Wild West Taffy – here’s a pic: 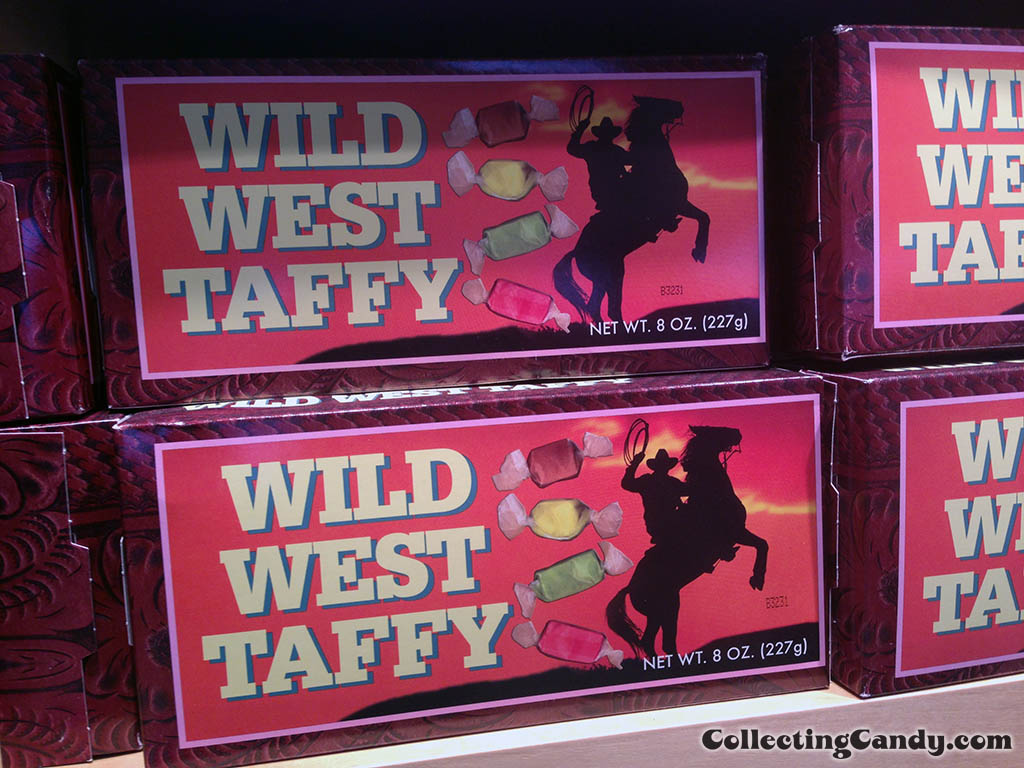 And that’s everything I’ve got to share on the Texas-themed souvenir candy I discovered during my Dallas layover.   If you spot any souvenir candy in your area, send me a pic – I’d love to see what’s out there!

See you next time, pardner! 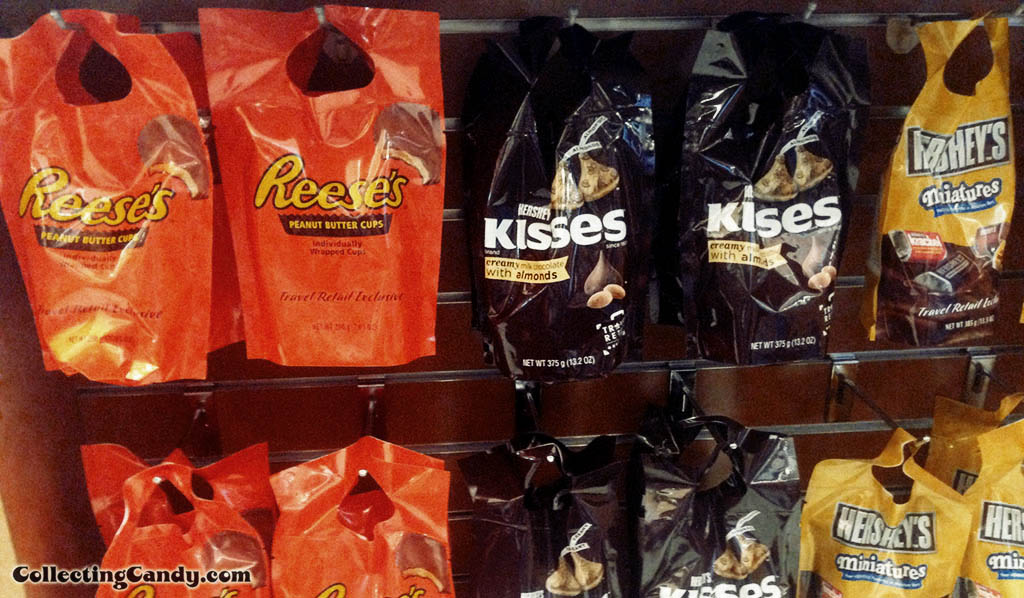 A New York City based writer, editor and sometimes actor. After spending much of the 1990′s in the comic book business helping tell the stories of Marvel Comics’ X-Men as series editor, he has since split his time between developing his own entertainment properties while still consulting and working on others. Having been described as “the Indiana Jones of lost and forgotten candy”, Jason is one of the country’s premier candy collectors and historians with his discoveries appearing in countless blogs, magazines, newspaper articles, and books. Always happy to share his knowledge and unique perspectives on this colorful part of our popular culture, Jason has consulted with New York’s Museum of Food and Drink and has also been a featured guest on Food Network’s Heavyweights, France’s M6 Capital, and New York’s TheActionRoom.com. My Google Profile+
View all posts by Jason Liebig →
This entry was posted in Boxed, Sour Candy and tagged candy collecting, candy collection, candy collector, candy wrapper collection, candy wrapper collector, collectible, collecting candy, confectionery, confections, Dallas, packaging, souvenir, sweets, Texas, vintage candy wrapper, wrapper. Bookmark the permalink.

4 Responses to Texas Souvenir Candy Discovered During a Dallas Layover!