Two nights ago while I slept, CollectingCandy.com’s page view counter ticked over past one million.  It’s such a big round number and one I’m excited to see the site hit.  As such, I thought the perfect way to mark the occasion would be to look back at an appropriately-named treat that’s still around today: Pangburn’s Millionaires!

When I woke up yesterday morning, I checked my “site stats” and found that we had made it past one million all-time views.  It was pretty exciting:

Now that CollectingCandy.com is a millionaire, we can acknowledge that achievement while also celebrating the product with the same name from Pangburn’s of Texas.  [Note: We recently covered another product from Pangburn’s – their wonderful and weird Trog-Lo-Dytes.]

I wasn’t able to discern just how long Pangburn’s Millionaire’s have been around but it appears that they date back at least to the 1950’s/1960’s.  Here is a vintage promotional poster from my collection that features an illustration of a Texas millionaire in an over-sized limousine:

I think that’s a great poster as it features a fun illustration as well as giving us a clear look at the actual Millionaires candy and packaging.

The earliest actual packaging piece for Millionaires that I have to show today dates back to 1976, and it features the same cowboy seen on the package in that poster:

As great as that cowboy illustration was, it seems that by the late 1970’s a decision had been made to drop it from Millionaires packaging as evidenced by this 1978 box lid:

So the cowboy illustration was dropped from Millionaires boxes by 1978 and the change was permanent as this next wrapper from 1983 shows.  [Note: In the small print on this wrapper is also an indication that, at this point in its history, Pangburn’s had been become a division of the Barton’s candy corporation.] 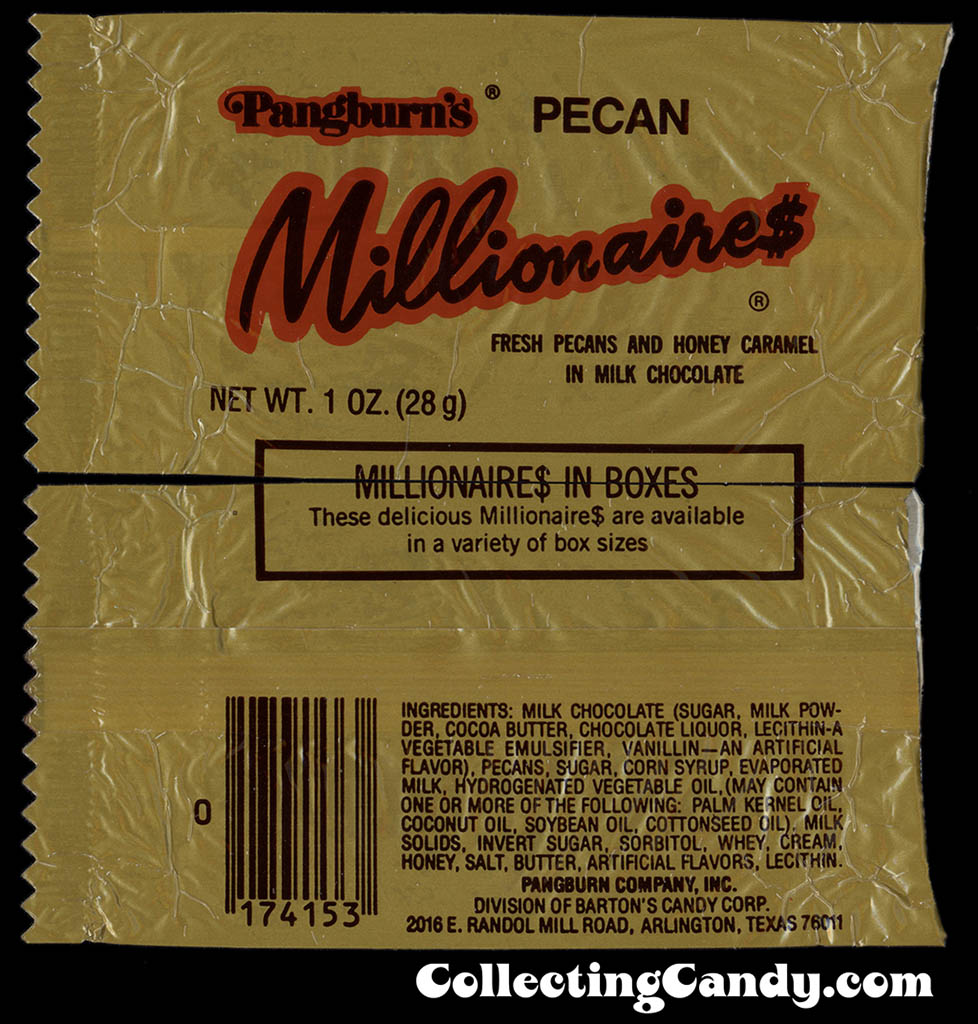 Jumping ahead to last year, I learned that Pangburn’s of Texas still exists as do their classic Millionaires.

These days, Pangburn’s operates as a division of Russell Stover.  I was thrilled to pick up a modern day Millionaires bar last year featuring Russell Stover’s signature “Big Bite” packaging: 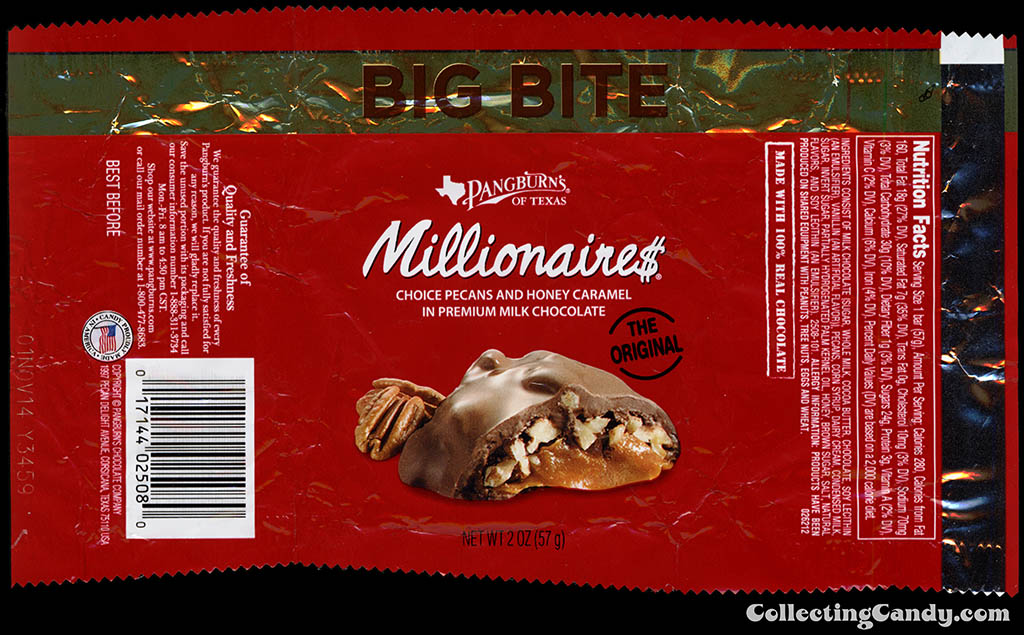 It’s great to see that Russell Stover has kept Pangburn’s name and products alive, bringing them into the modern era while still acknowledging their rich heritage.

One of the modern brand extensions of Millionaires has been a sugar-free version: 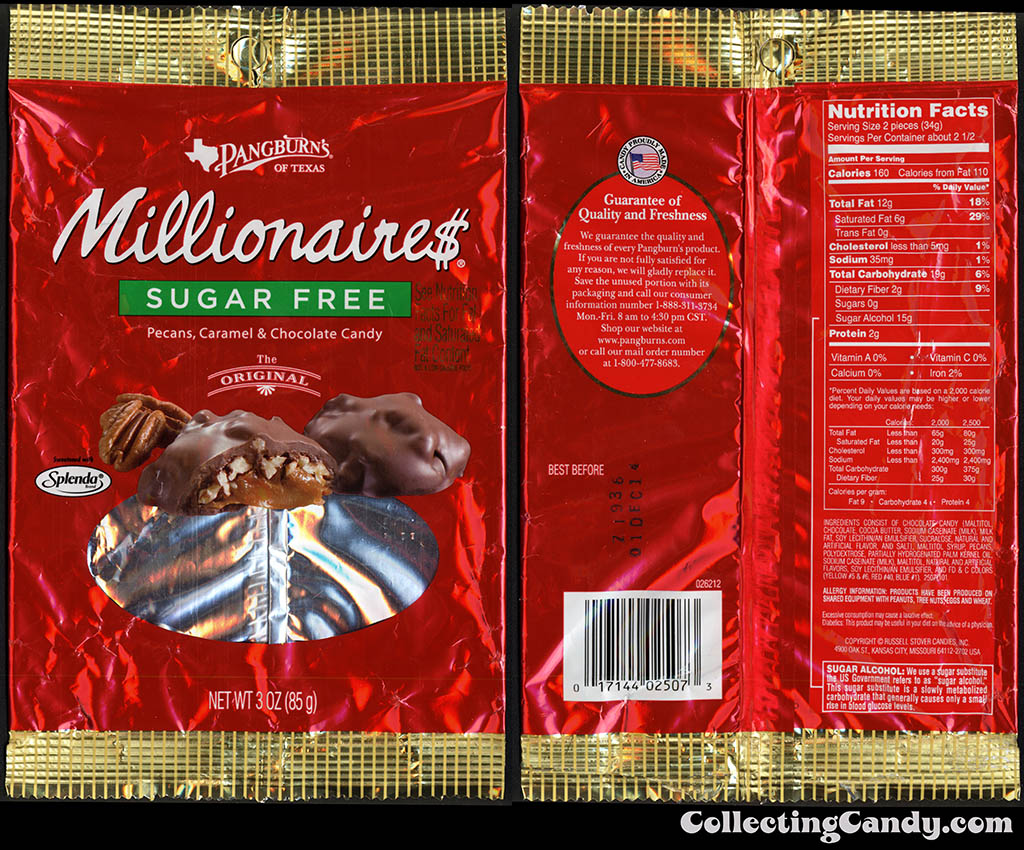 That’s everything I have on Pangburn’s Millionaires, but it’s not the only thing I have to share today.

Going back to the 1980’s and possibly earlier, Pangburn’s created their own brand extension of Millionaires with their Billionaires offering.  [Note: I considered saving my Billionaires coverage until the site hits that pageview milestone, but I did the math and I don’t think I can wait that long.] 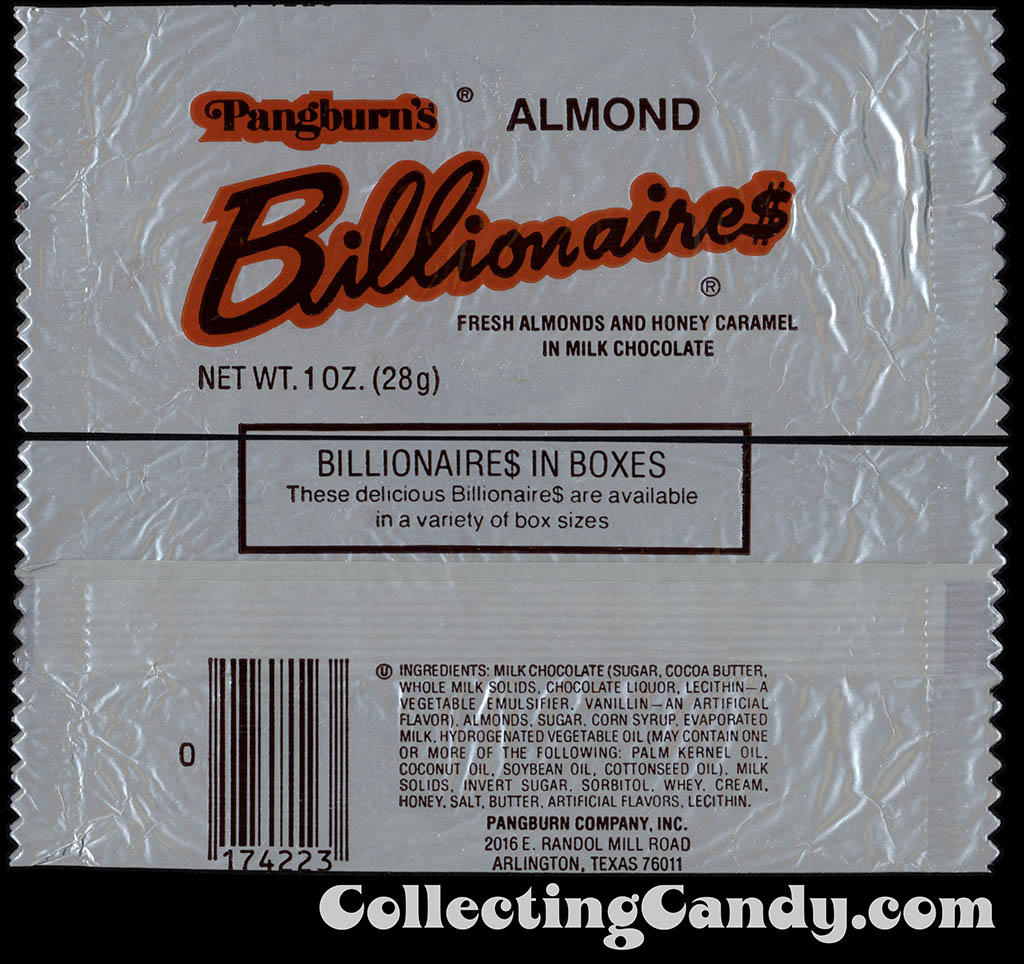 Back in the 1980’s, Pangburn’s Billionaires were an almond variant on the pecans found in Millionaires.  But when I picked up a modern version of Billionaires, it appears that they have taken a different direction with the contemporary recipe.

Rather than bringing in almonds, the Pangburn’s Billionaires of 2014 keep the pecans in, instead swapping peanut butter for the caramel found in Millionaires, as you can see from this box wrap: 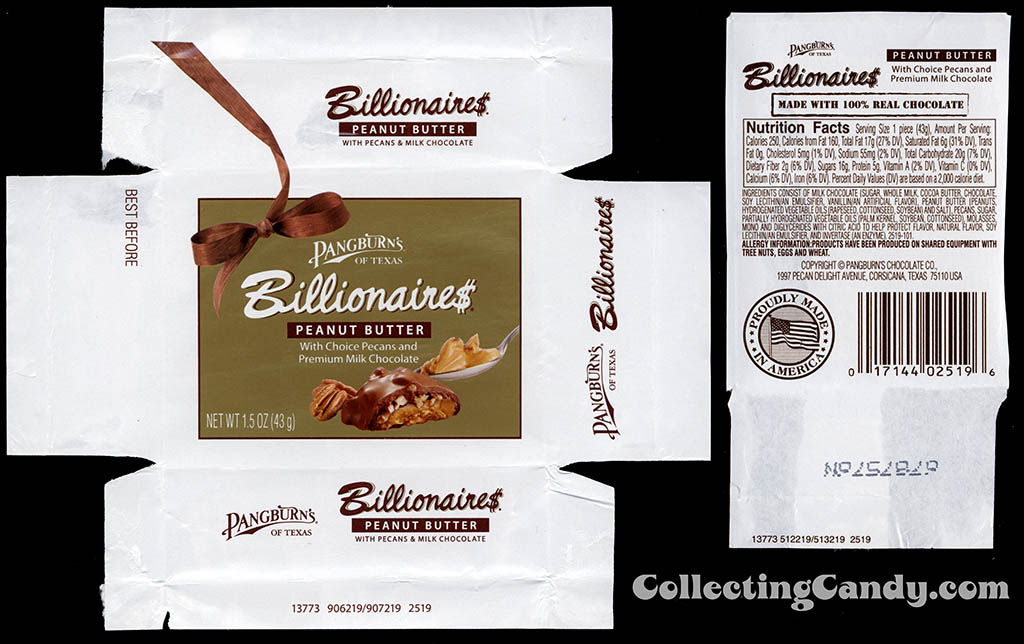 I think either recipe sounds great – and having sampled the modern Billionaires, I’m a fan.

So that’s everything I’ve got from Pangburn’s of Texas and their Millionaires/Billionaires product lineup and history.   I hope you’ve enjoyed checking them out.

I want to thank everyone for visiting CollectingCandy.com these past two-and-a-half-years and helping us reach this fun milestone.  We are only just beginning, so keep visiting and we’ll keep investigating and celebrating the lost histories and mysteries of candy.

Last year in the UK, Nestle introduced a brand new bar to their Wonka lineup and it features a name that demanded it be included in today’s post.  Here is the wrapper for the new Wonka Millionaire’s Shortbread bar: 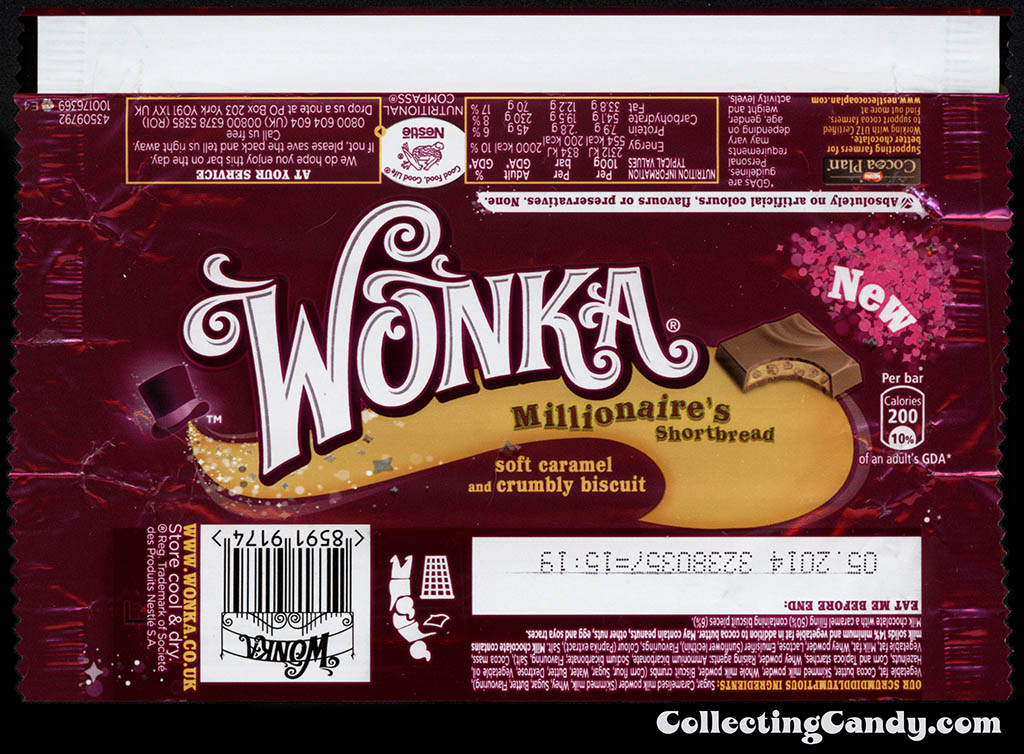 A New York City based writer, editor and sometimes actor. After spending much of the 1990′s in the comic book business helping tell the stories of Marvel Comics’ X-Men as series editor, he has since split his time between developing his own entertainment properties while still consulting and working on others. Having been described as “the Indiana Jones of lost and forgotten candy”, Jason is one of the country’s premier candy collectors and historians with his discoveries appearing in countless blogs, magazines, newspaper articles, and books. Always happy to share his knowledge and unique perspectives on this colorful part of our popular culture, Jason has consulted with New York’s Museum of Food and Drink and has also been a featured guest on Food Network’s Heavyweights, France’s M6 Capital, and New York’s TheActionRoom.com. My Google Profile+
View all posts by Jason Liebig →
This entry was posted in 1950's, 1960's, 1970's, 1980's, Boxed, Chocolate, Nestle, Peanut Butter, Wonka and tagged 1950's, 1960's, 1970's, candy collecting, candy collection, candy collector, candy wrapper collection, candy wrapper collector, collectible, collecting candy, confectionery, confections, Nestle, packaging, Pangburn's, sweets, vintage, vintage candy wrapper, Wonka, wrapper. Bookmark the permalink.

4 Responses to Celebrating our One-Millionth Pageview with Pangburn’s Millionaires!