Happy Easter everyone!  Today I am going to cover a range of the always-classic Easter treat of marshmallow Peeps.  For anyone curious about the history of the brand I would like to recommend my write-up from last year which covered the Peeps 50th Anniversary celebration from 2003.  So now let’s get to the Easter 2014 Peeps Party!

Almost everything I have to show today are items that were available this year.  Before I get to them, here is a look back at how Peeps and Peeps packaging appeared in the 1970’s, when I first encountered them in my own youth.

Those are Peeps I remember from my own childhood.  Now let’s get the party started.

As most of you will know, Peeps are available all-year round in various forms and each major holiday tends to get its own special versions.  For Easter this year I picked up a cool “party pack” of standard Peeps but in a full rainbow of colors.  From the folks at IT’SUGAR — here’s their giant Peeps Party Pack : 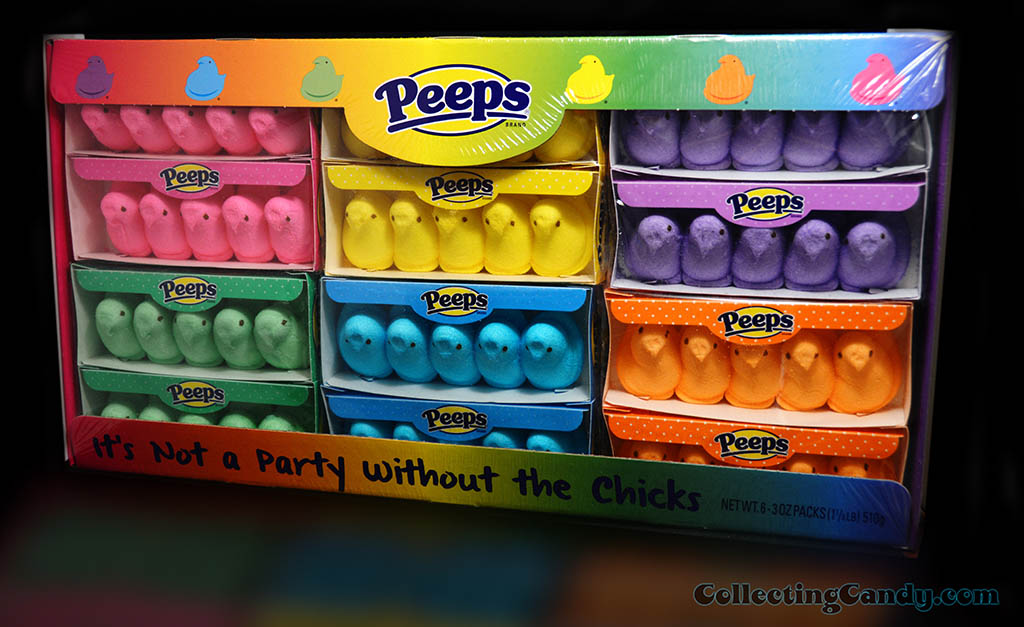 Those Peeps packs do look ready to party, so I set them loose (but not completely loose) for a few photos. 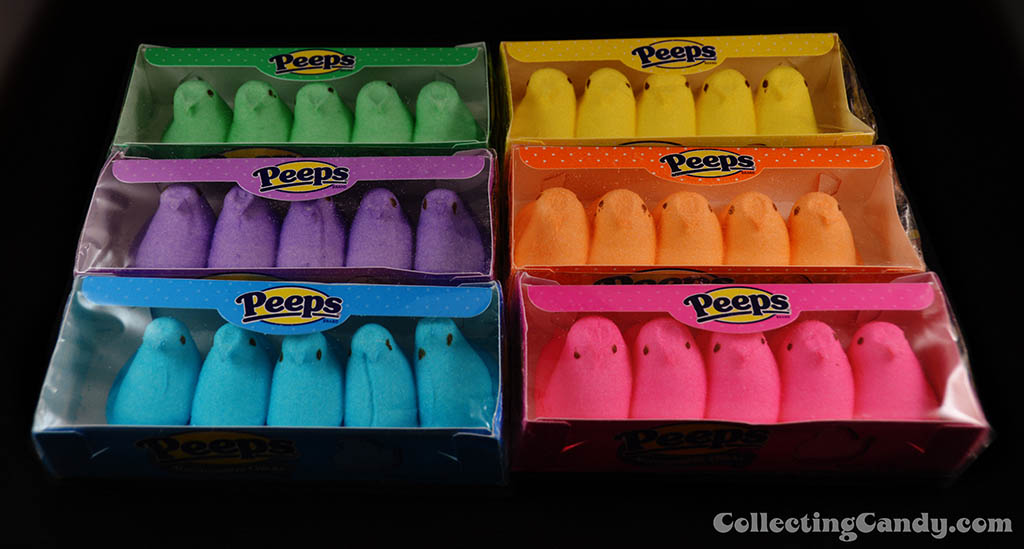 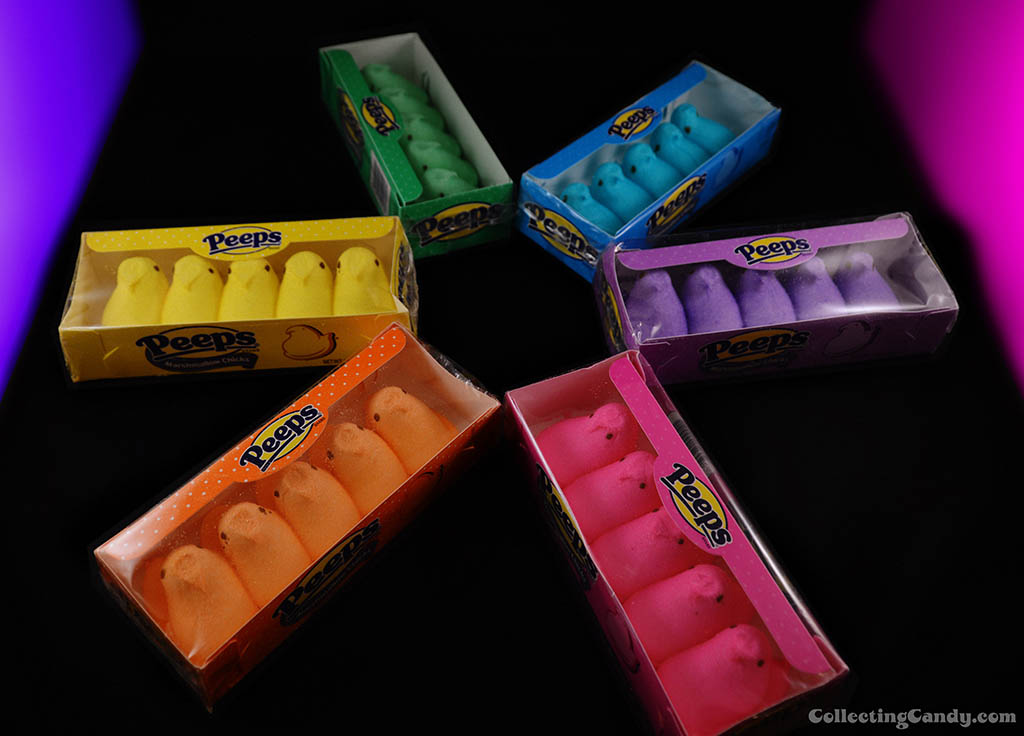 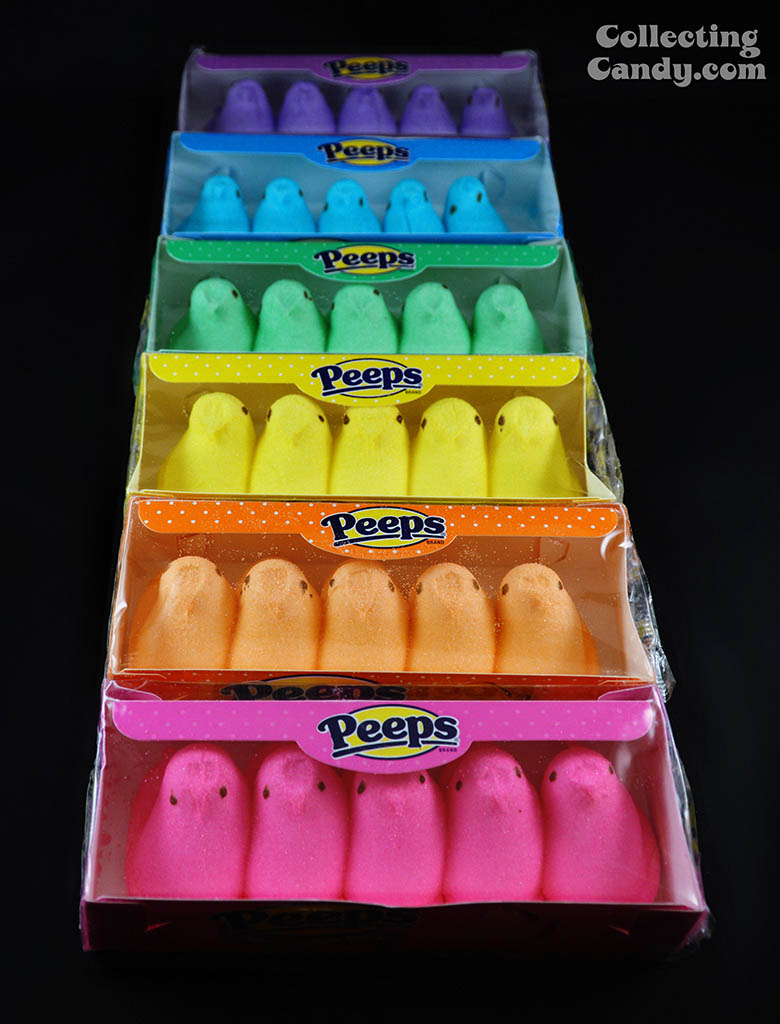 I may have gotten a little indulgent with all of the Peeps Party photos, but they just make for such strong visuals with their color variations, it’s hard not to have fun with them.

Multi-colored Peeps also get put on sticks these days and make for a Rainbow Peeps Pop! 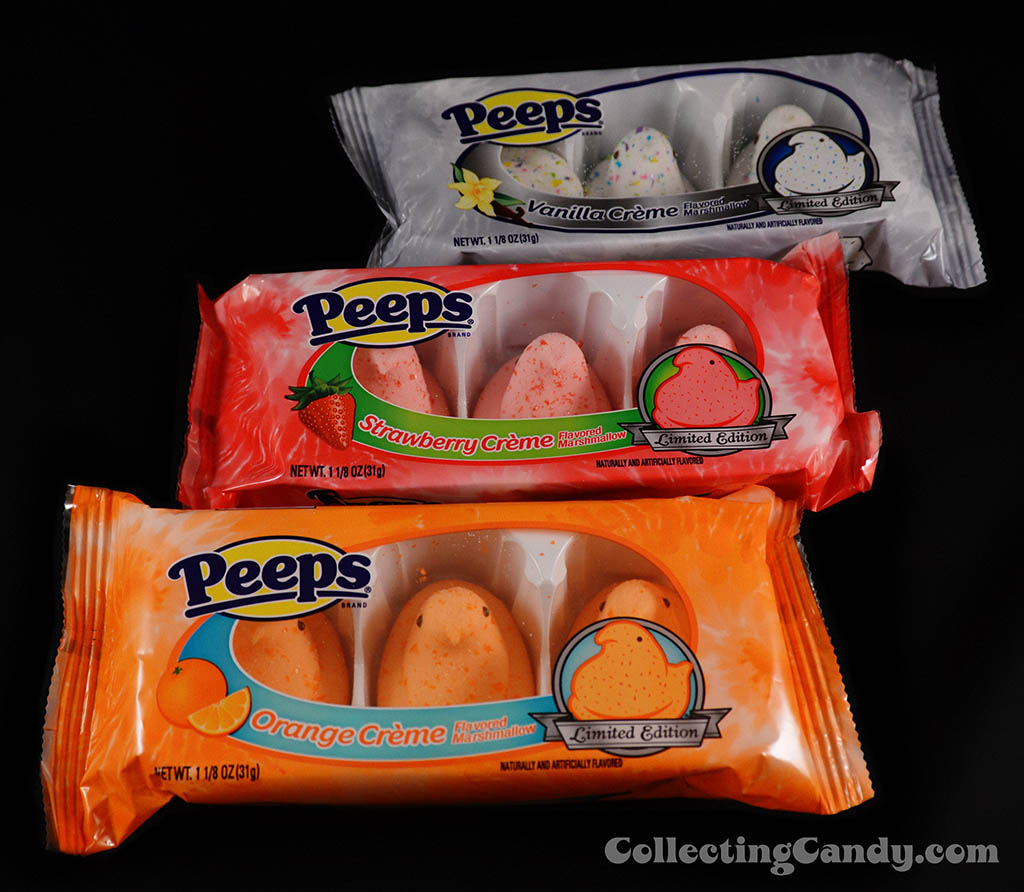 The only place I found the limited edition creme-flavored Peeps was at Target, so they may have been an exclusive for 2014.  Of course I saved the wrappers for my Peeps packaging collection: 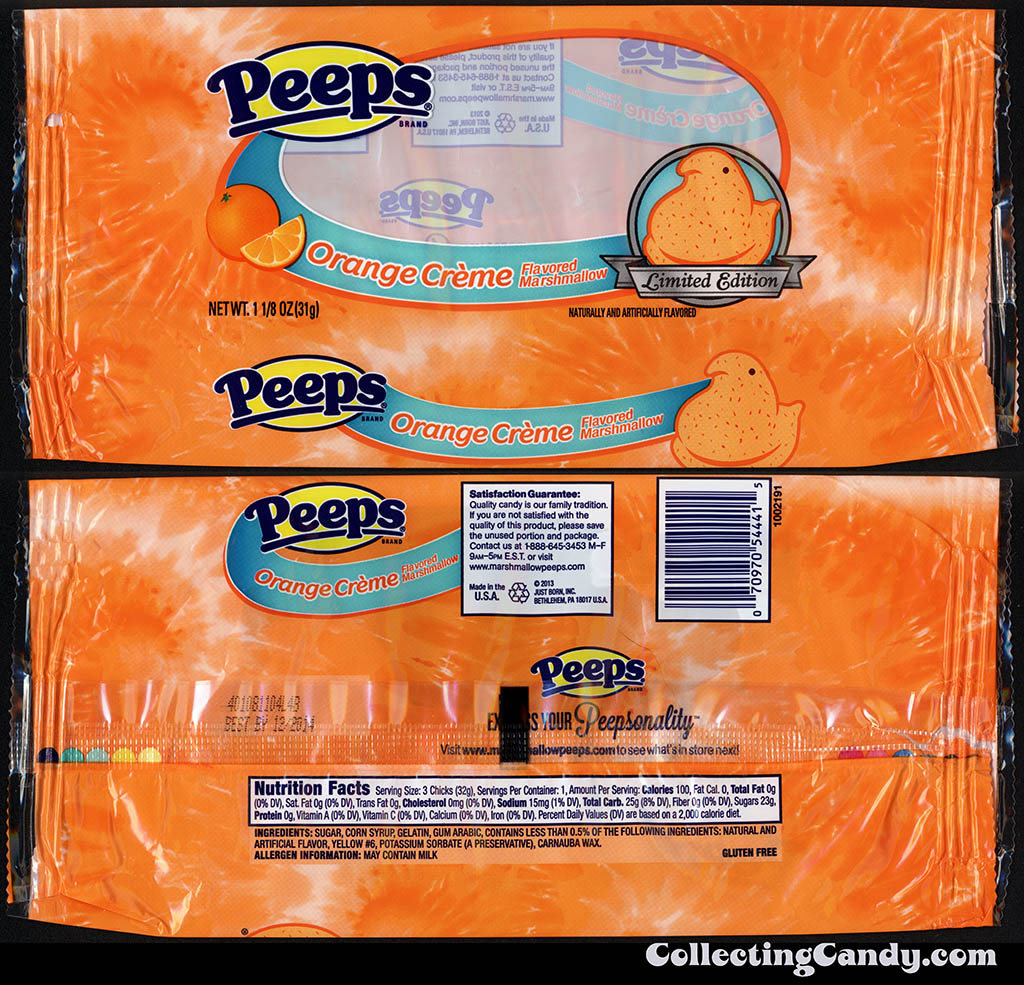 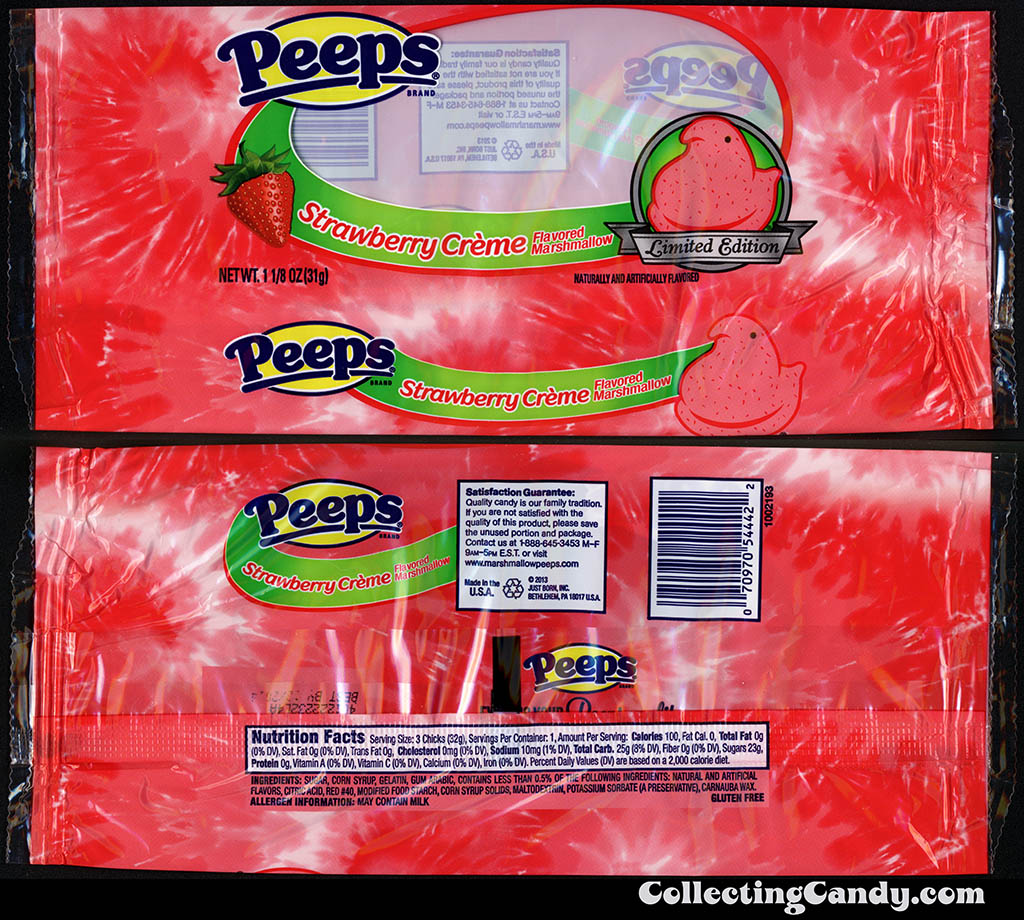 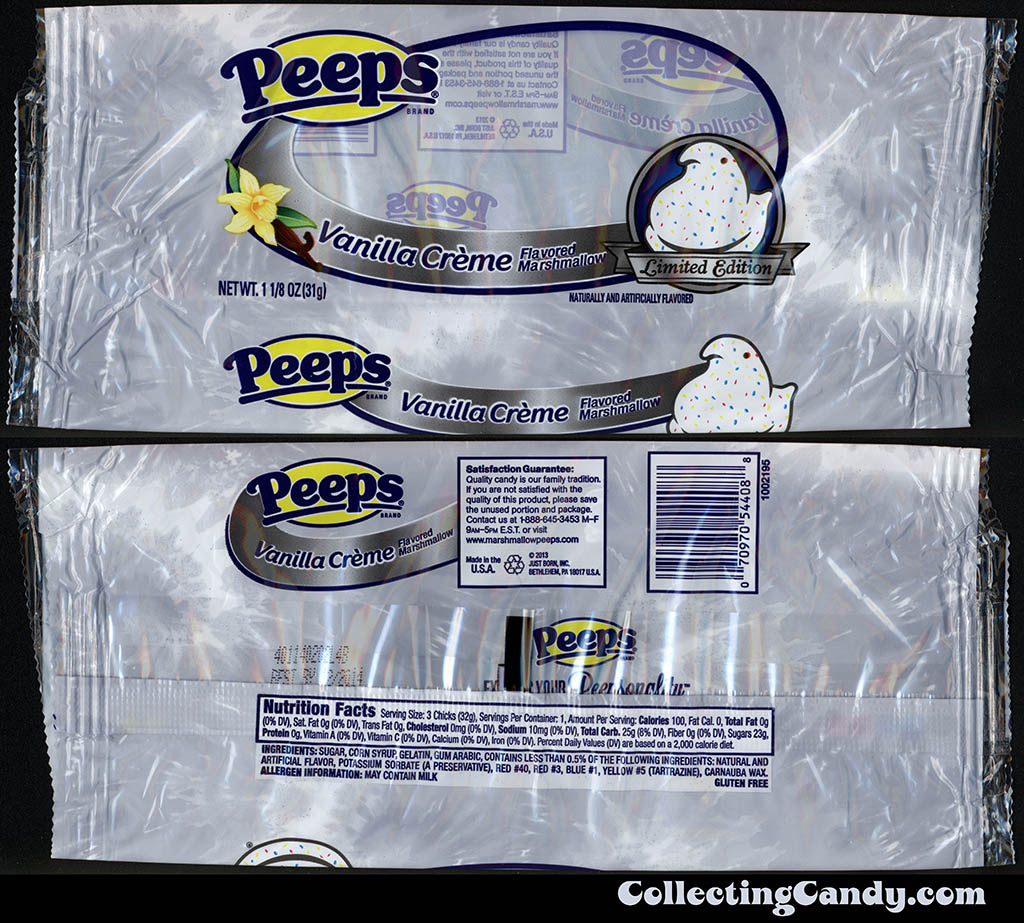 Those limited editions were all delicious and the way they were packaged is just like the way that dipped Peeps are found.  So let’s next take a look at the variety of chocolate-dipped Peeps I was able to find this year: 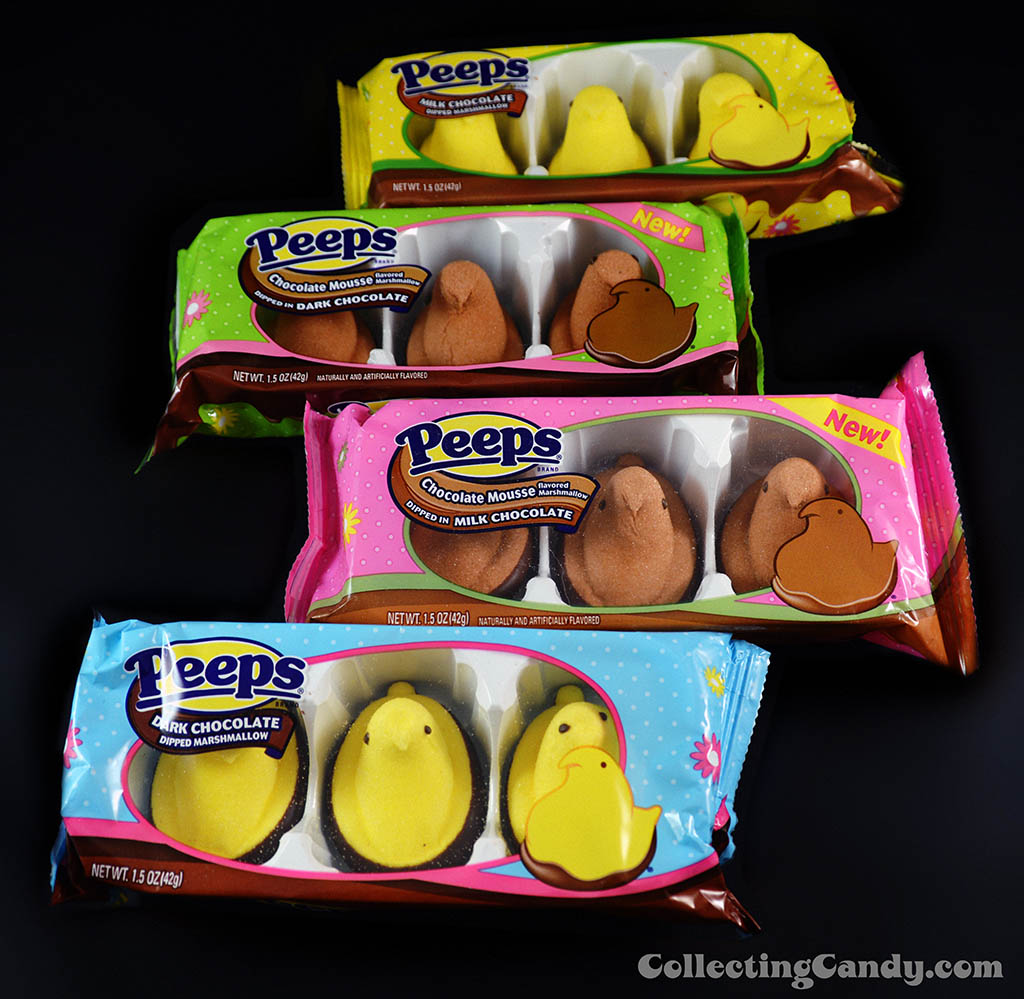 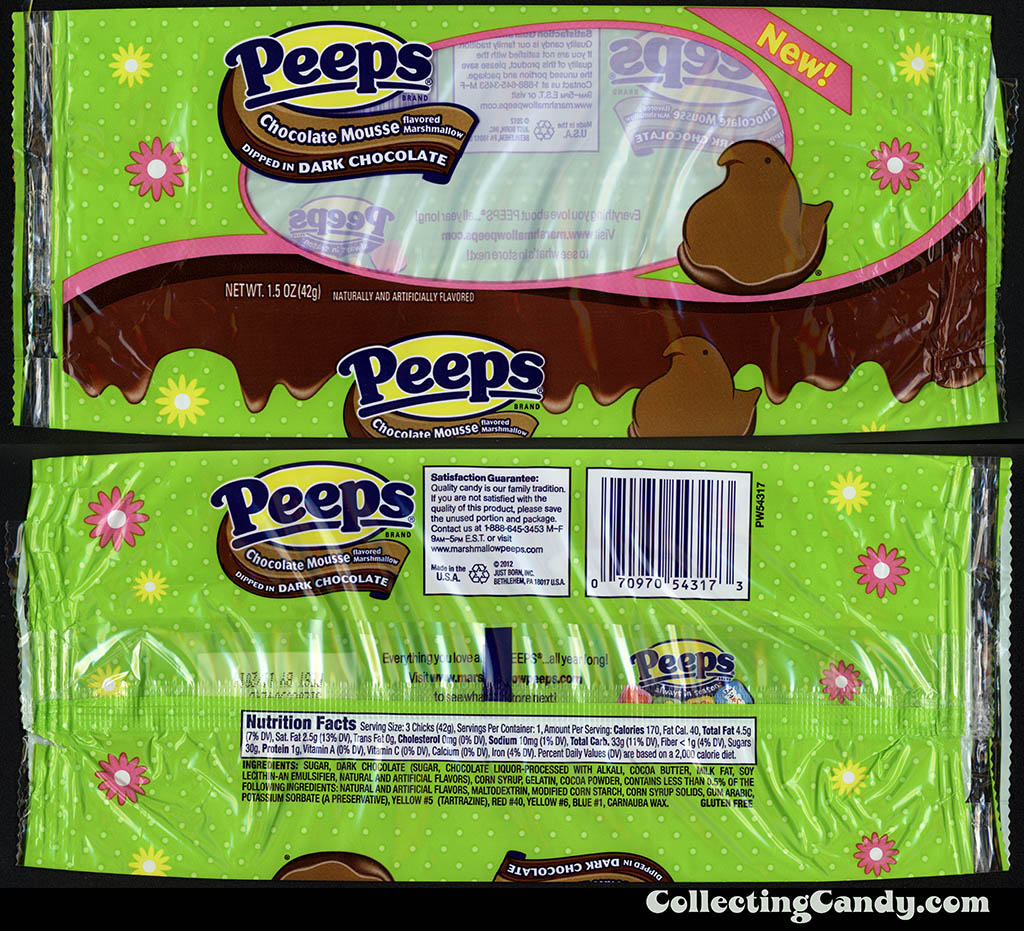 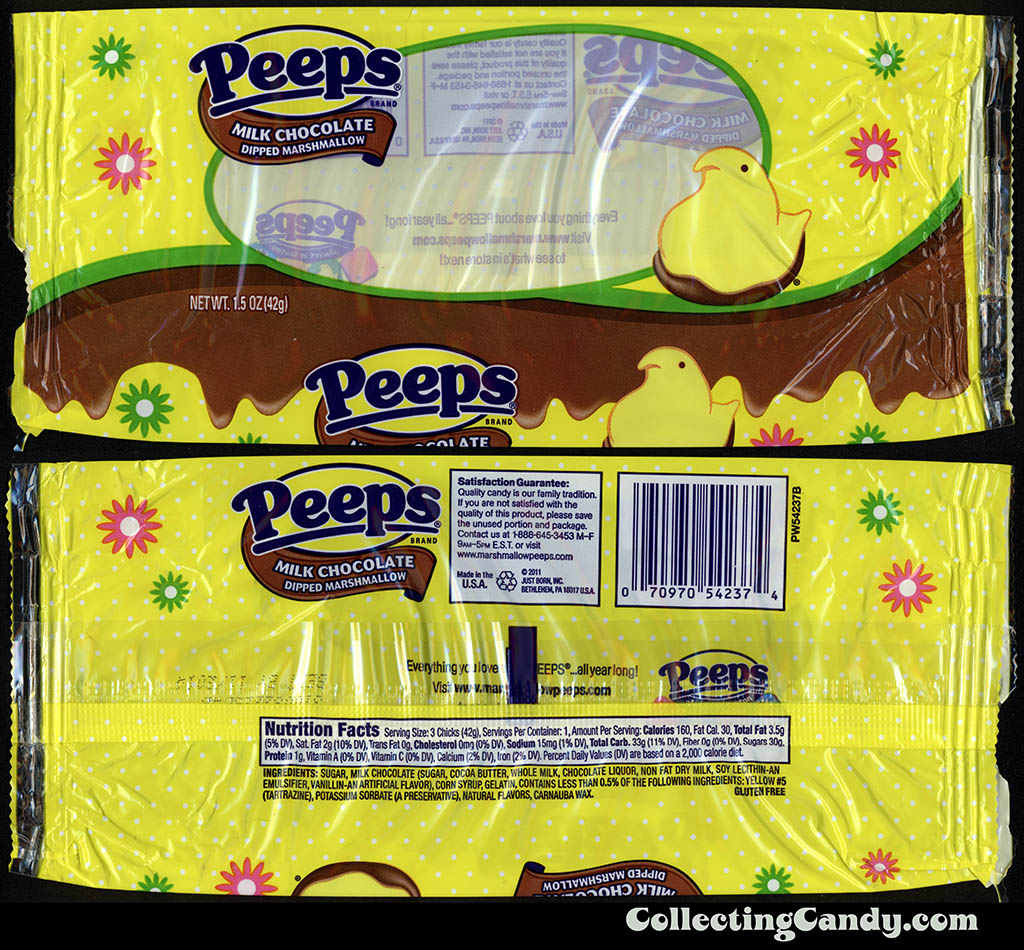 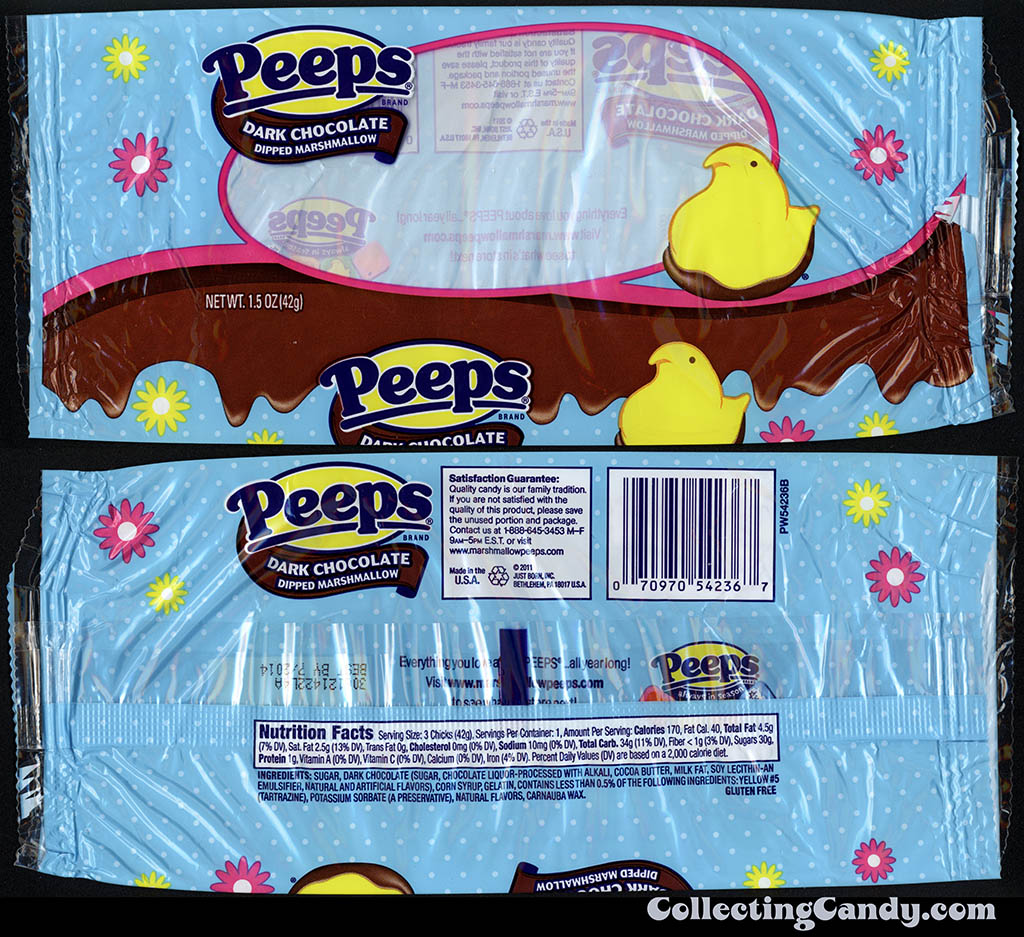 And here’s a wrapper I saved from a sugar-free Peeps pack: 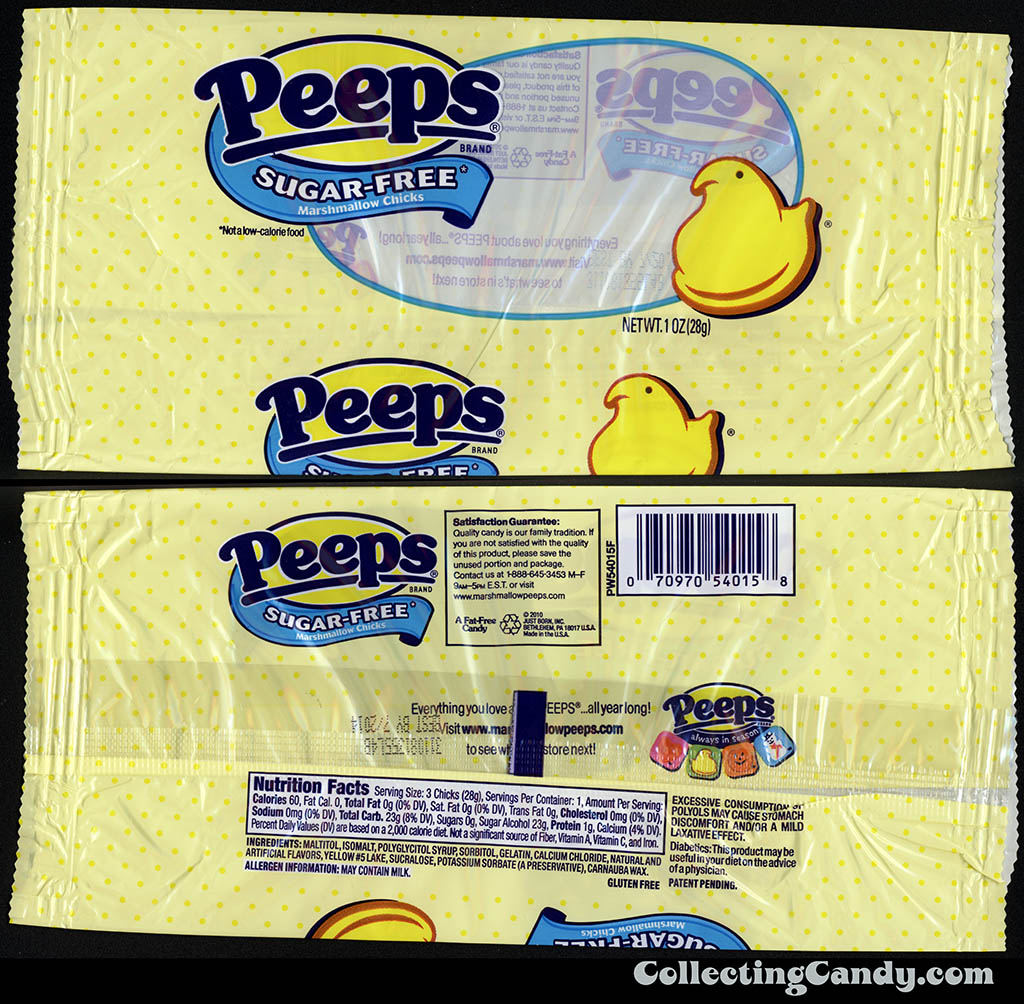 Another Peeps product that lends itself to today’s theme is a fairly new flavor called Party Cake: 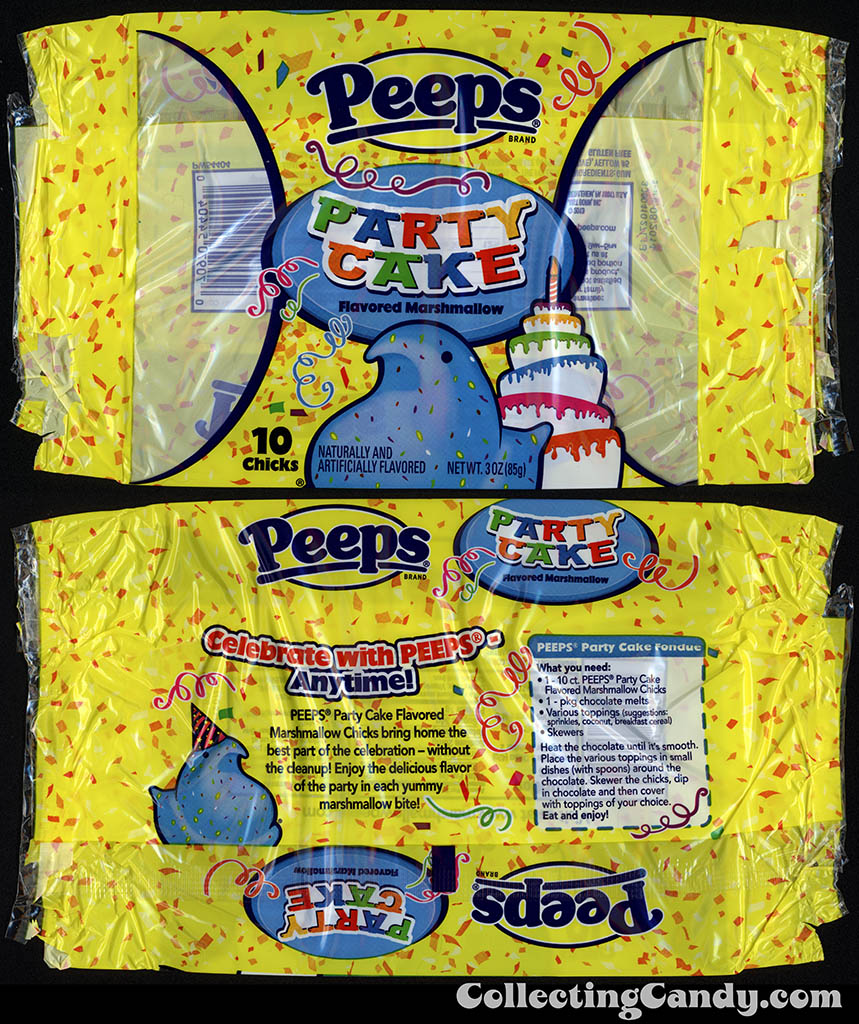 Peeps entered the Kinder-Egg realm with this next item I have to show.  It’s a hollow chocolate egg that contains a Peep inside.  Pretty neat!

Those are the Peeps chicks I have to share today, but it’s not everything I’ve got.  It’s Easter after all so I also have a few fun Peeps Bunnies items to showcase! 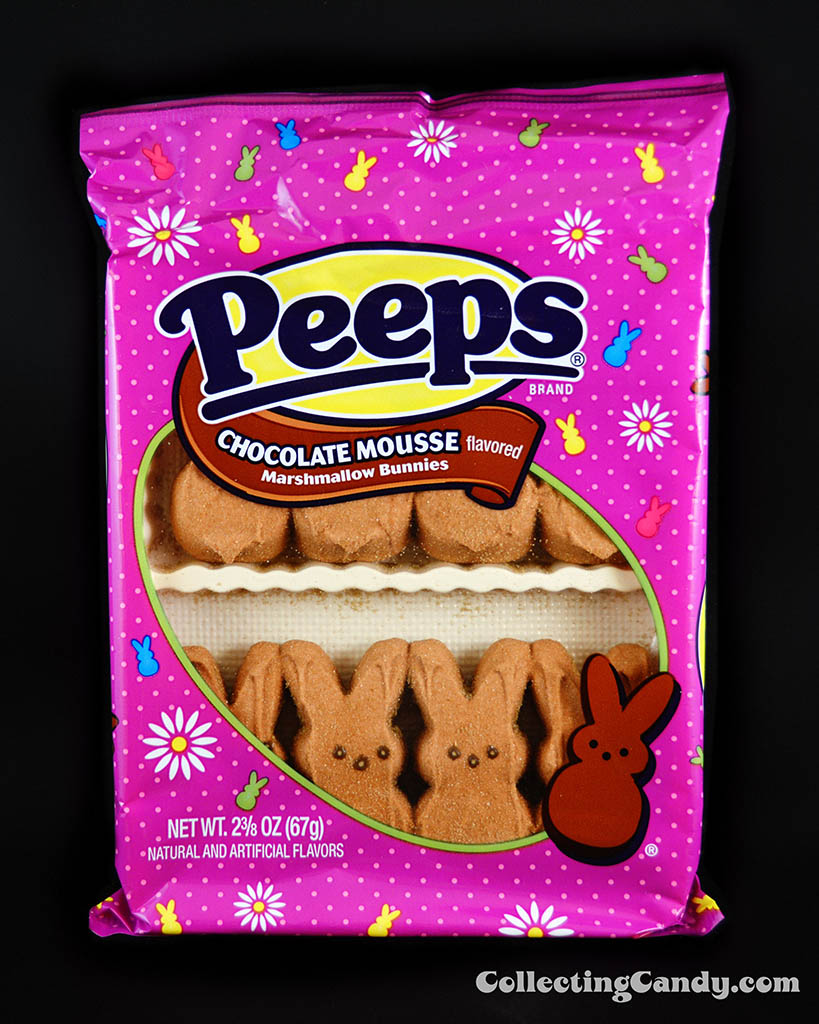 Here’s the wrapper package for a single pack giant Bunny:

Last but not least, a pair of shots of classic Easter Peeps Bunnies in a trio of colors: 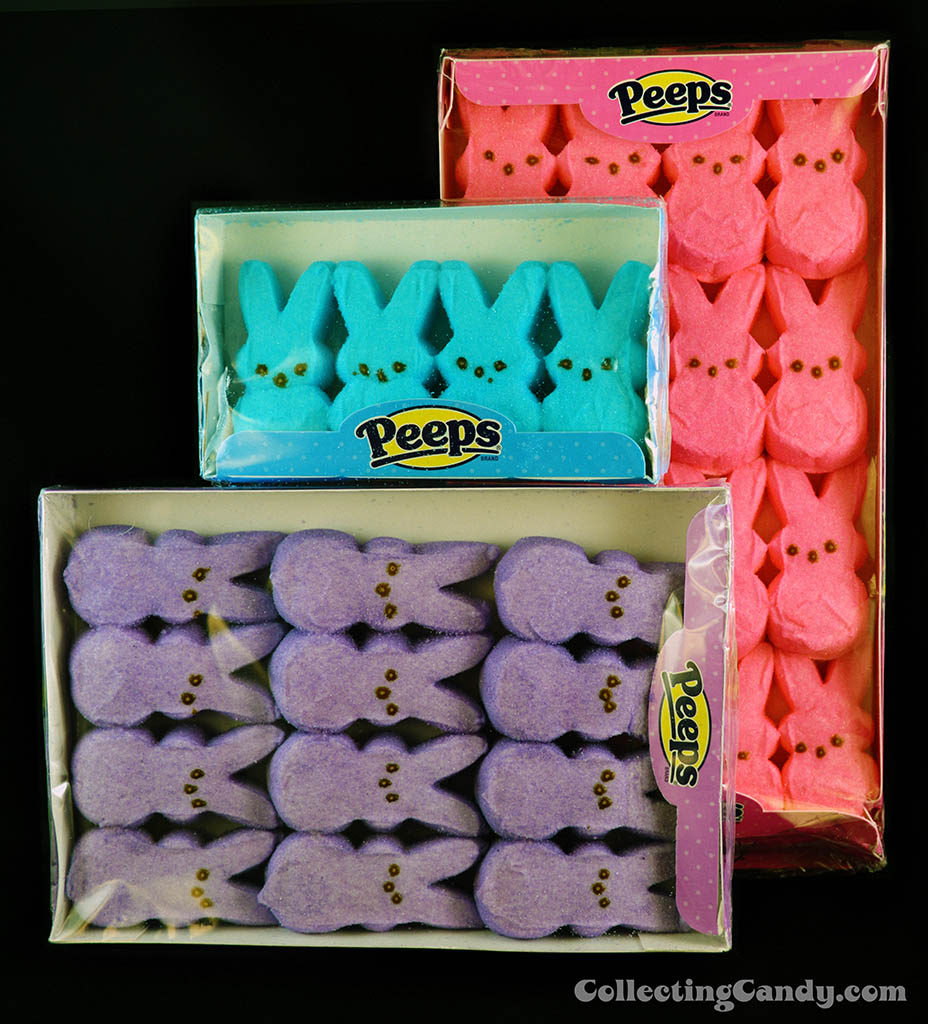 And that’s everything I’ve got to share on the Peeps Party that is Easter 2014.  I hope you guys enjoyed it and enjoyed all of our Easter Week 2014 coverage.  We’ll see you next time!

[Note:  I tried to create a Peeps Party animated GIF for today’s post, but it didn’t turn out exactly as I envisioned.  Even so, I decided to still include it as today’s parting image.]

A New York City based writer, editor and sometimes actor. After spending much of the 1990′s in the comic book business helping tell the stories of Marvel Comics’ X-Men as series editor, he has since split his time between developing his own entertainment properties while still consulting and working on others. Having been described as “the Indiana Jones of lost and forgotten candy”, Jason is one of the country’s premier candy collectors and historians with his discoveries appearing in countless blogs, magazines, newspaper articles, and books. Always happy to share his knowledge and unique perspectives on this colorful part of our popular culture, Jason has consulted with New York’s Museum of Food and Drink and has also been a featured guest on Food Network’s Heavyweights, France’s M6 Capital, and New York’s TheActionRoom.com. My Google Profile+
View all posts by Jason Liebig →
This entry was posted in 1970's, Easter, Holiday and tagged candy collecting, candy collection, candy collector, candy wrapper collection, candy wrapper collector, collectible, collecting candy, confectionery, confections, Easter, Easter candy, holiday, limited edition, marshmallow, packaging, Peeps, sweets, vintage candy wrapper, wrapper. Bookmark the permalink.

4 Responses to Easter Week 2014: It’s a Peeps Party and I Brought the Chicks!!