Willy Wonka’s Nerds are one of my all-time favorites and that certainly includes their holiday releases.  In recent years Easter-themed Nerds have taken on the moniker of “Hoppin'” Nerds but that wasn’t always the case.  Today we’re going to look at a range of historical Easter Nerds packaging as well as a strange and officially-licensed early Nerds Easter egg decoration kit!

Willy Wonka’s Nerds came onto the candy scene in 1982 and they were a quick hit, spawning knockoffs from other companies like Topps Bazooka Zooks and more.  Beyond just a candy hit, they also spawned a healthy licensing business with their cute Nerds mascot characters appearing on t-shirts, dolls and all manner of merchandise.

In 1986, a company called Doc Hinkles released one of their “Shrinkles” Easter egg decoration kits based on the Nerds license.  I assume that Doc Hinkles Shrinkles worked on a similar process as Shrinky Dinks.  In this case a graphical sleeve was designed to shrink up and tighten around an egg after a few seconds in boiling water, creating colorful Easter egg fun, presumably without the mess of dyes.  Here’s a look at the cardboard kit packet envelope as well as one of the actual Shrinkles plastic sleeves: 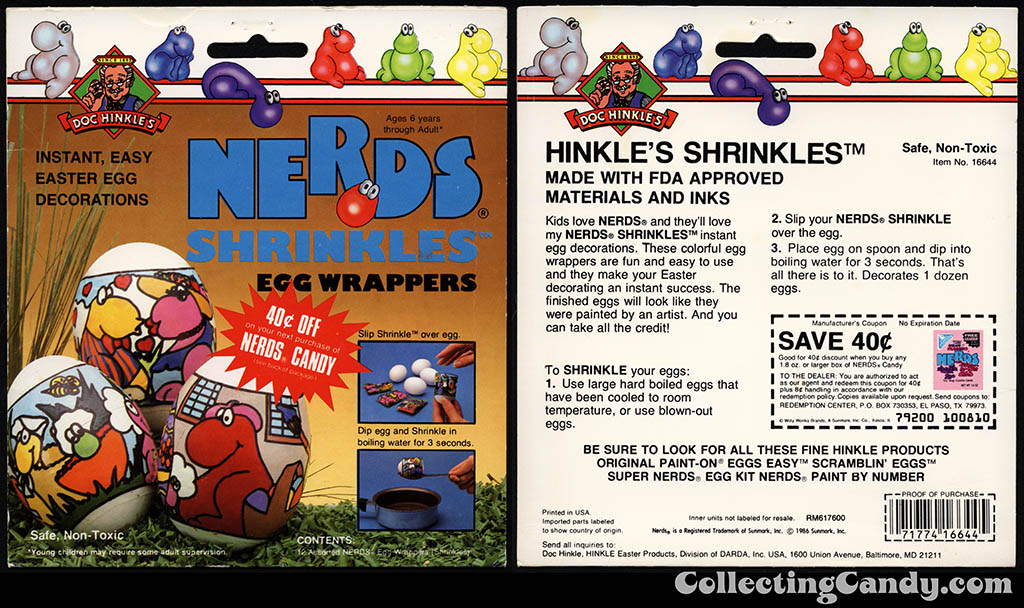 Note the cut-out coupon for 40-cents off of a box of Nerds candies: 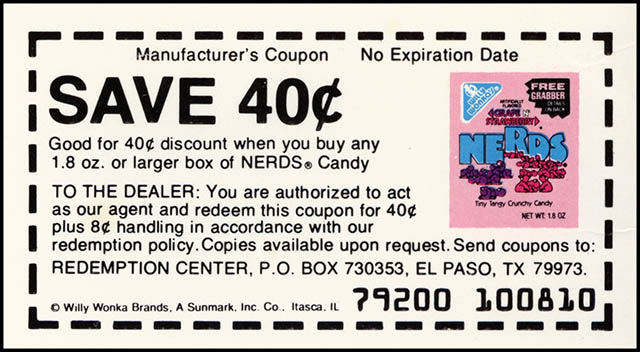 Although I find Doc Hinkle’s Nerds Shrinkles quite an oddball item, I think that oddness just makes it that much more delightful.

A few years later, Willy Wonka brands would be producing seasonal editions of most of their products and that was certainly the case with Nerds.  1990 would see the release of Easter Nerds in fun size boxes, sold in a larger bagged package: 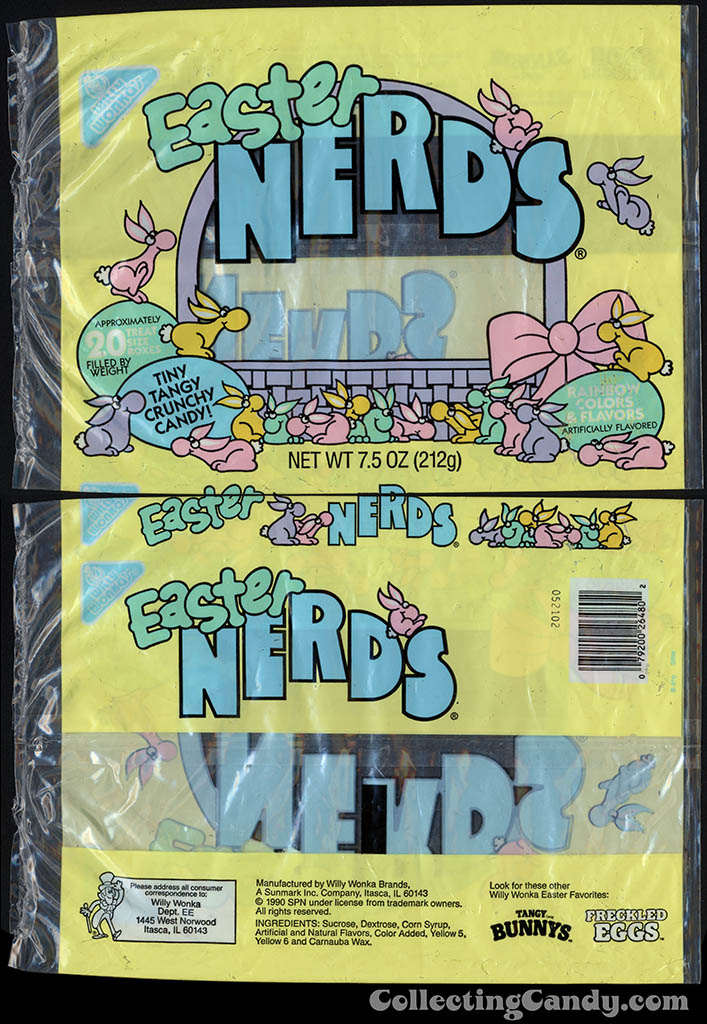 Here’s one of the smaller boxes the bag contained:

A few years later in 1994 Willy Wonka’s Nerds had gotten a logo redesign but they still referred to the Easter seasonal release as “Easter Nerds”, as is evidenced by the following box from fellow collector and Flickr user Marie Dubay: 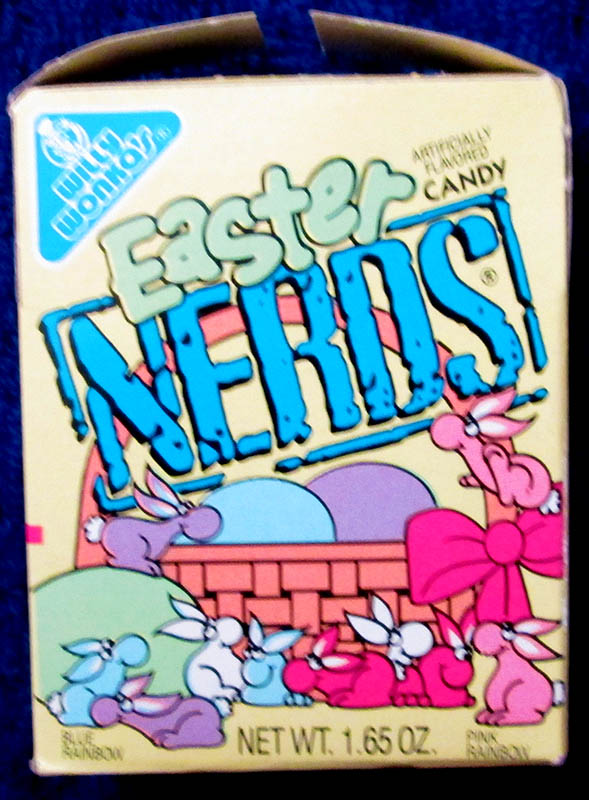 At this point in our Easter Nerds timeline I have to jump ahead to the late 2000’s (yes, it’s quite a gap of missing packaging.)

Sometime in the intervening years, Easter Nerds had been re-branded with the more active-sounding “Hoppin’ Nerds” name – here’s the earliest package I have for them – from 2009: 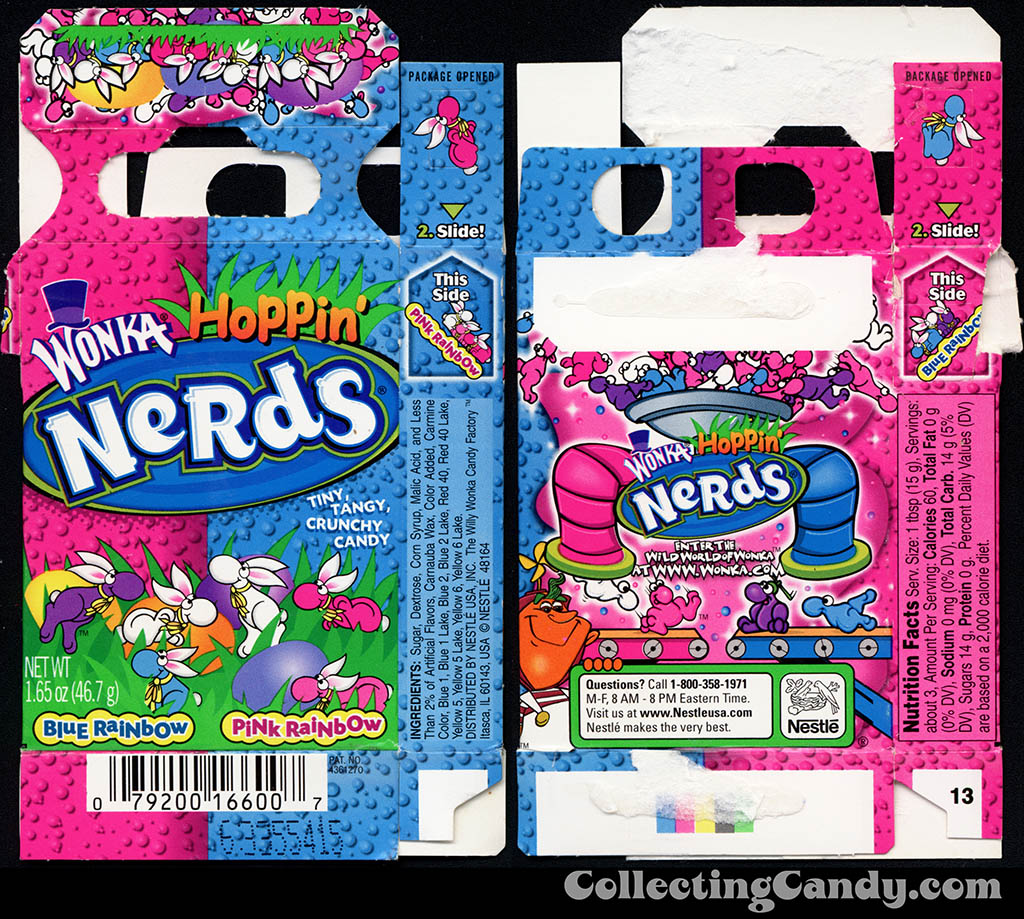 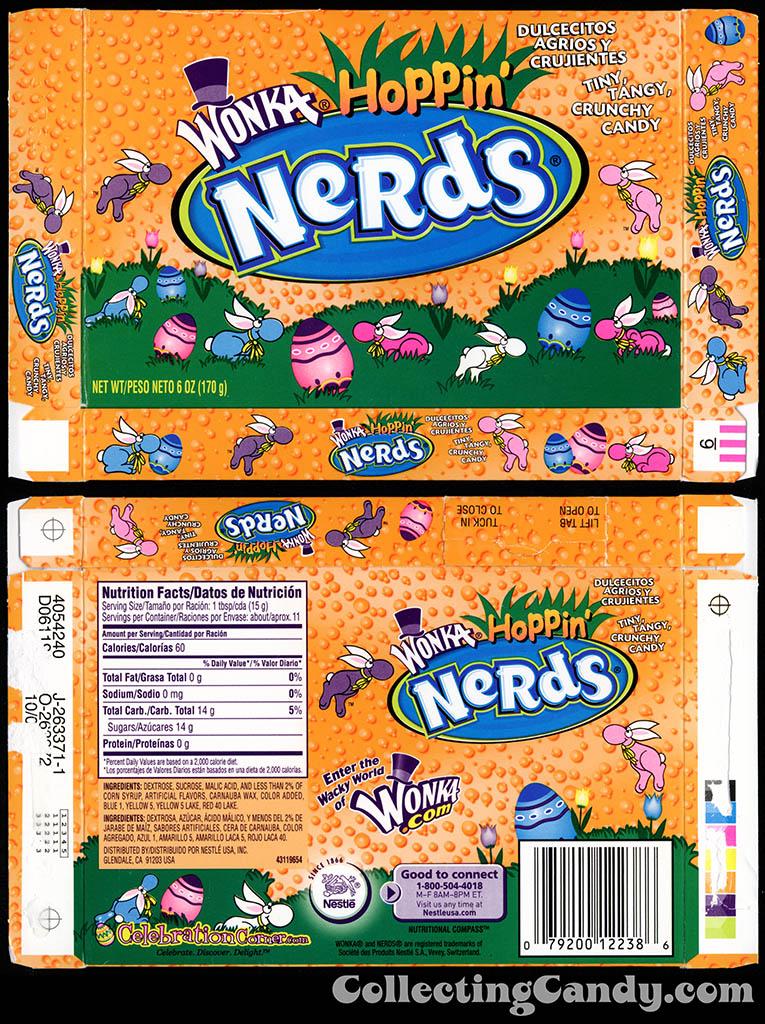 Early on and many times over the years, Wonka has released plastic figural Nerds candy containers which have included versions created for the Easter holiday.  Back in 2010 I spotted these on store shelves: 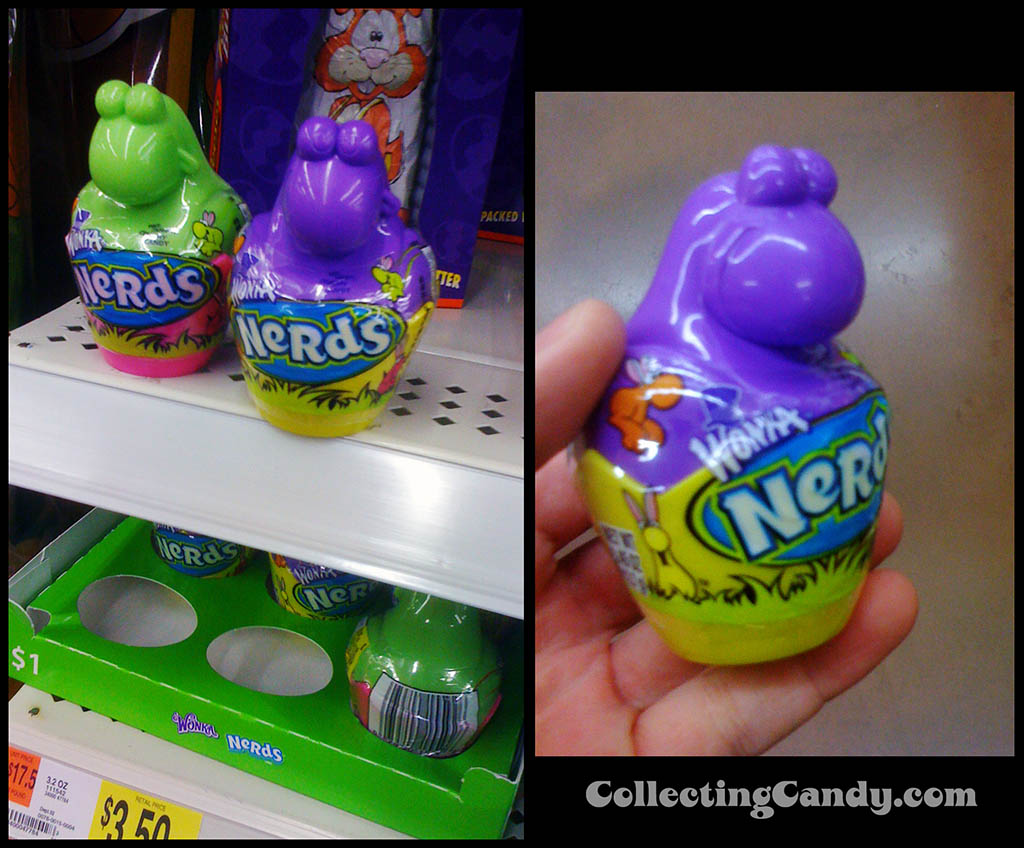 These days, Easter seasonal Nerds are still referred to as Hoppin’ Nerds, though the packaging sports a different color scheme than the design it replaced: 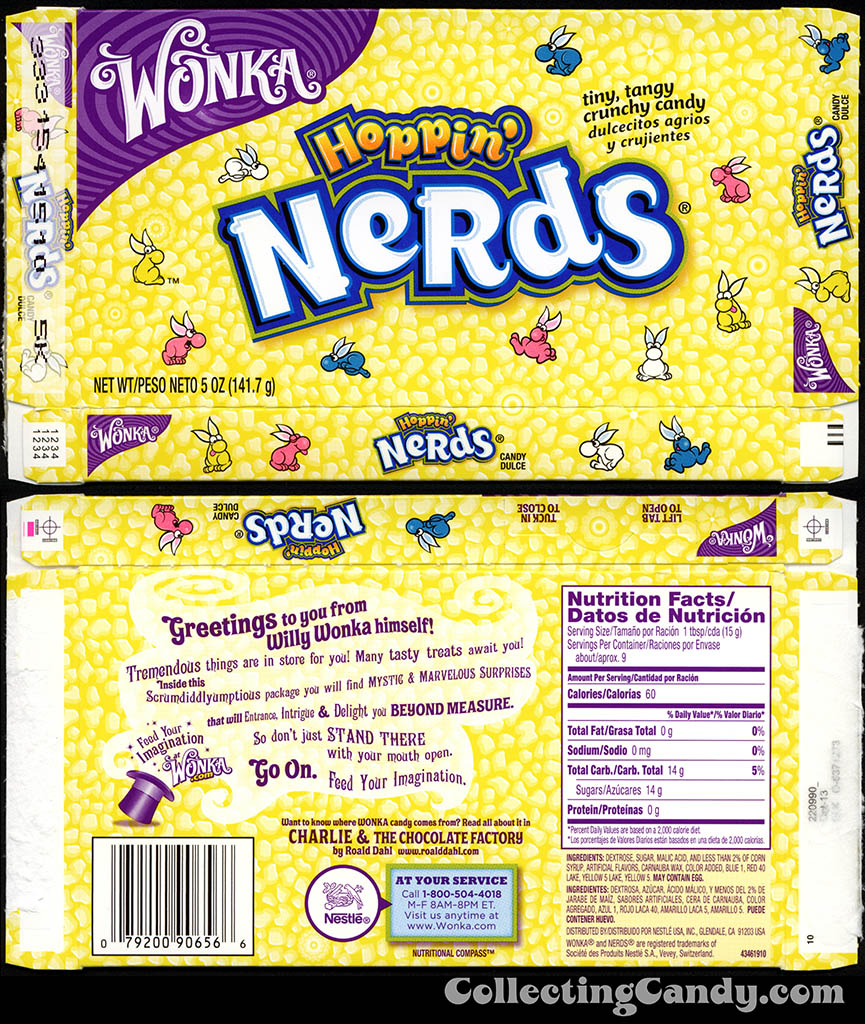 Finally, it wouldn’t be a CollectingCandy.com Easter Week post without a mention of jelly beans.  Yes, Nerds even get their own jelly beans but these aren’t the ordinary variety – these are Nerds Bumpy Jelly Beans!  This year I picked up a striking package for them: 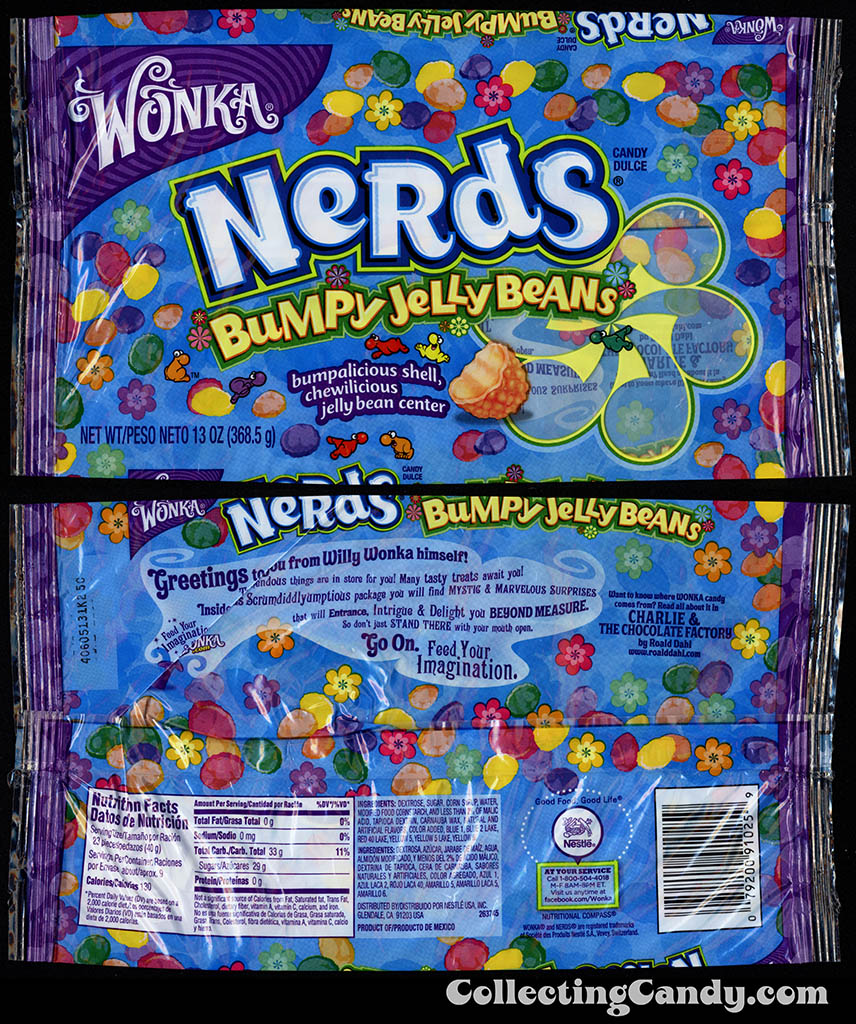 I think the colors on that one are spectacular.  I’d love to see a boxed version of Easter Nerds get that same colorful graphic treatment.

And that’s everything I’ve got to share today on Easter Nerds through the years.  See you next time!

A New York City based writer, editor and sometimes actor. After spending much of the 1990′s in the comic book business helping tell the stories of Marvel Comics’ X-Men as series editor, he has since split his time between developing his own entertainment properties while still consulting and working on others. Having been described as “the Indiana Jones of lost and forgotten candy”, Jason is one of the country’s premier candy collectors and historians with his discoveries appearing in countless blogs, magazines, newspaper articles, and books. Always happy to share his knowledge and unique perspectives on this colorful part of our popular culture, Jason has consulted with New York’s Museum of Food and Drink and has also been a featured guest on Food Network’s Heavyweights, France’s M6 Capital, and New York’s TheActionRoom.com. My Google Profile+
View all posts by Jason Liebig →
This entry was posted in 1980's, 1990's, Boxed, Easter, Holiday, Nestle, Wonka and tagged 1980's, 1990's, 80's, 80's candy, 90's, 90's candy, candy collecting, candy collection, candy collector, candy wrapper collection, candy wrapper collector, collectible, collecting candy, confectionery, confections, Easter, Easter candy, Nerds, packaging, sweets, vintage candy wrapper, Willy Wonka, Wonka, Wonka Nerds, wrapper. Bookmark the permalink.