As I already stated, getting candy from a vending machine is a unique experience and a very different one from how you might purchase and consume it otherwise.  This is definitely true for the candies of Just Born, which are typically sold in a boxes and can be saved and enjoyed over time.  But getting them out of a vending machine usually meant they went straight from the machine to your hand, and then you ate them until you were done.

I recall that as a kid, the vending machine experience always required a special flavor of parental negotiation – could you convince them to fund you for the bubblegum or candy via the penny, nickel or dime machine – or a toy out of the quarter machine?  (I’m quoting 1970’s prices here, btw.) 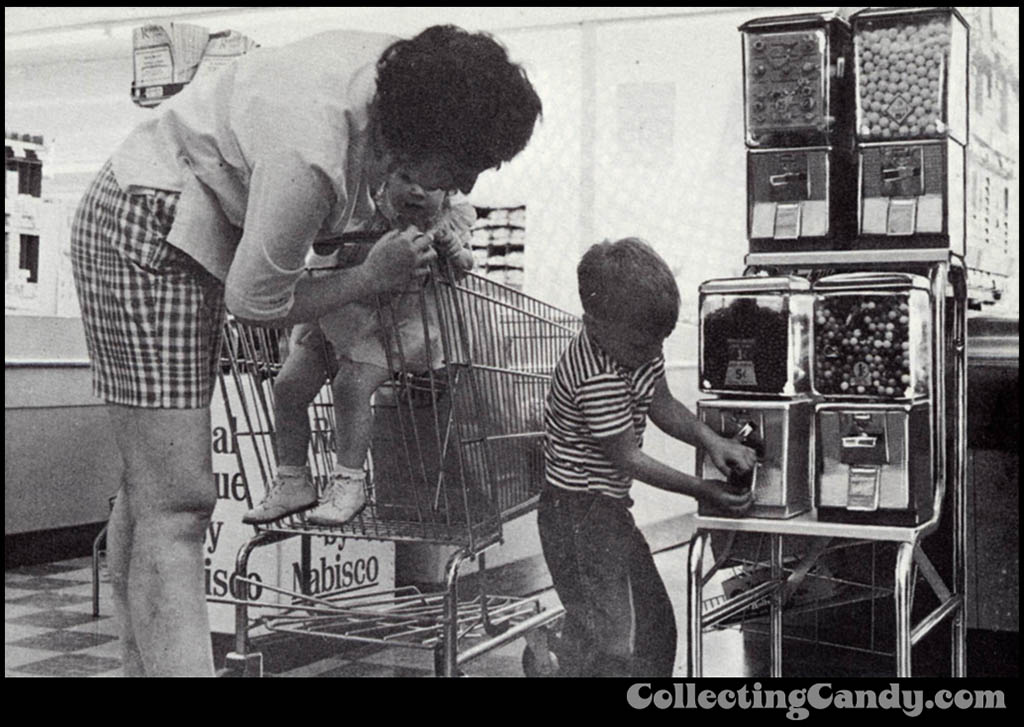 Mother and children at grocery store vending machines circa 1969

As a lifelong fan, I’ve had the pleasure of sampling Hot Tamales and Mike and Ike candies many times from vending machines.  For me, finding a machine filled with Just Born branded candies was a special treat because I knew the quality I was going to be getting.

But more than the familiarity, with Just Born’s type of confections, there was always a kind of turn-the-vend-handle roulette that would go on.  I think it had to do with the shape of the candies themselves, but when I’d put my coin in and turn the handle I was always left wondering how much candy I’d actually get.  Most times I felt like I got more than what I paid for.  That might be the optimist in me, but it just seemed to be the way the machines were built.  So, growing up, my perception was that Mike and Ike or Hot Tamales candies from a vending machine were the best value around. 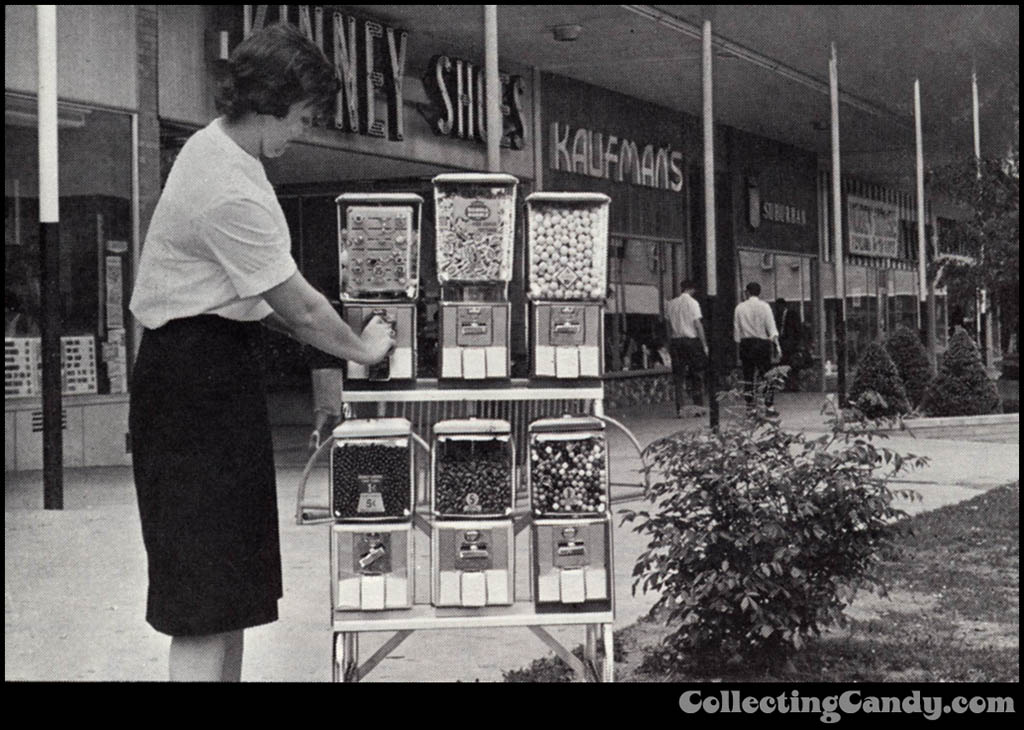 Woman at candy and gum vending machines circa 1969

As a Just Born collector and enthusiast, I’ve long sought to gather the various editions of their branded vending machine insert cards – but until recently the earliest versions of them had eluded me.  Finally, after years of searching I believe I’ve completed my set – and I’m excited to share them today.

Let’s first take a look at the vending machine insert cards for Mike and Ike: 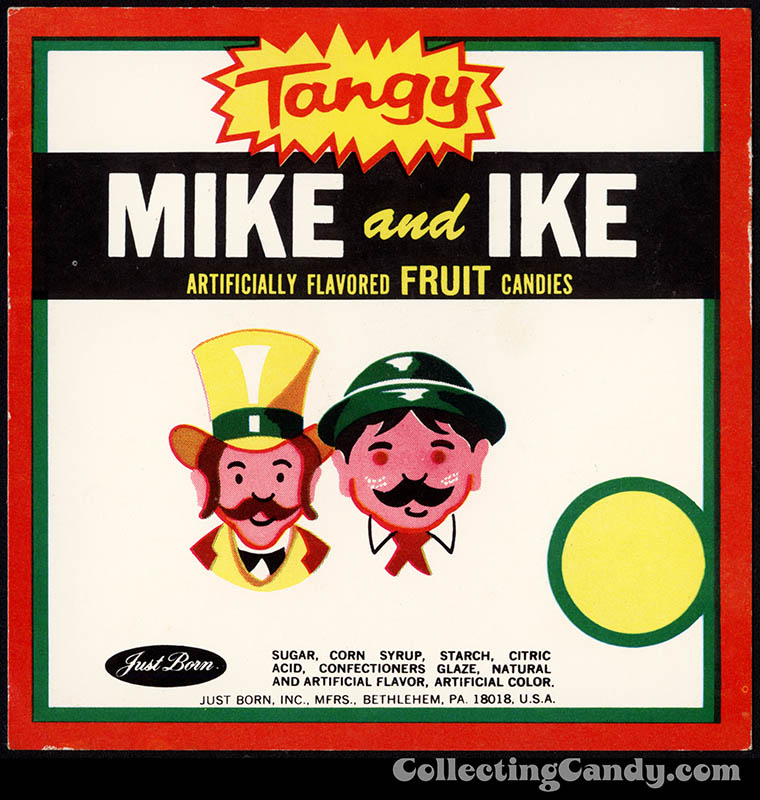 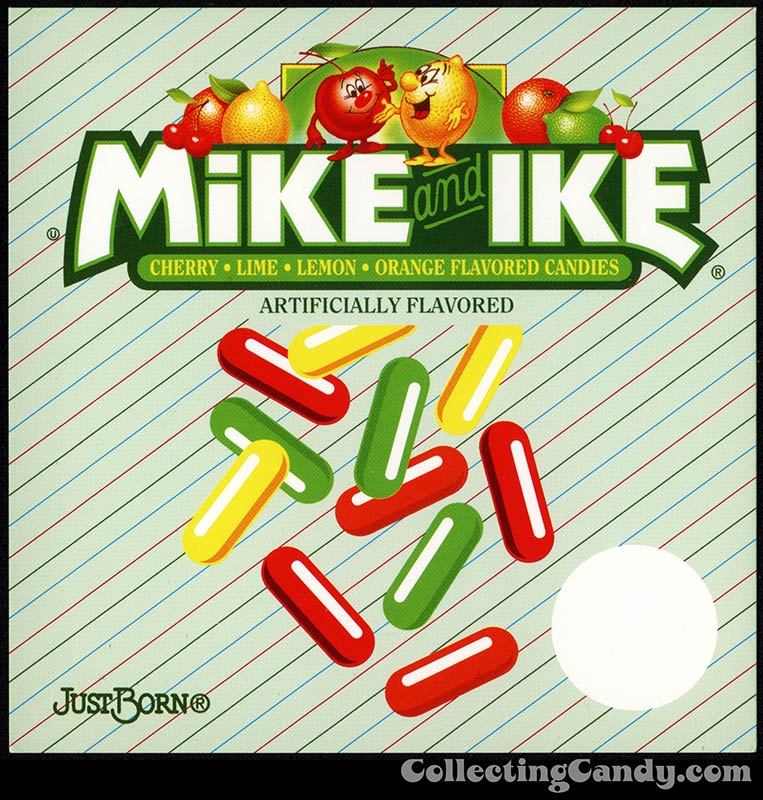 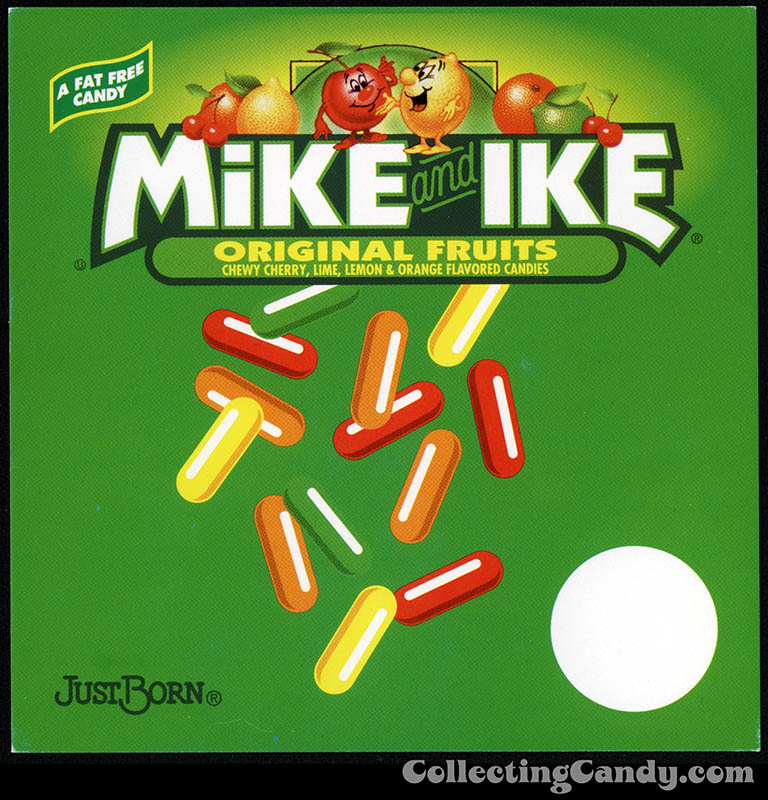 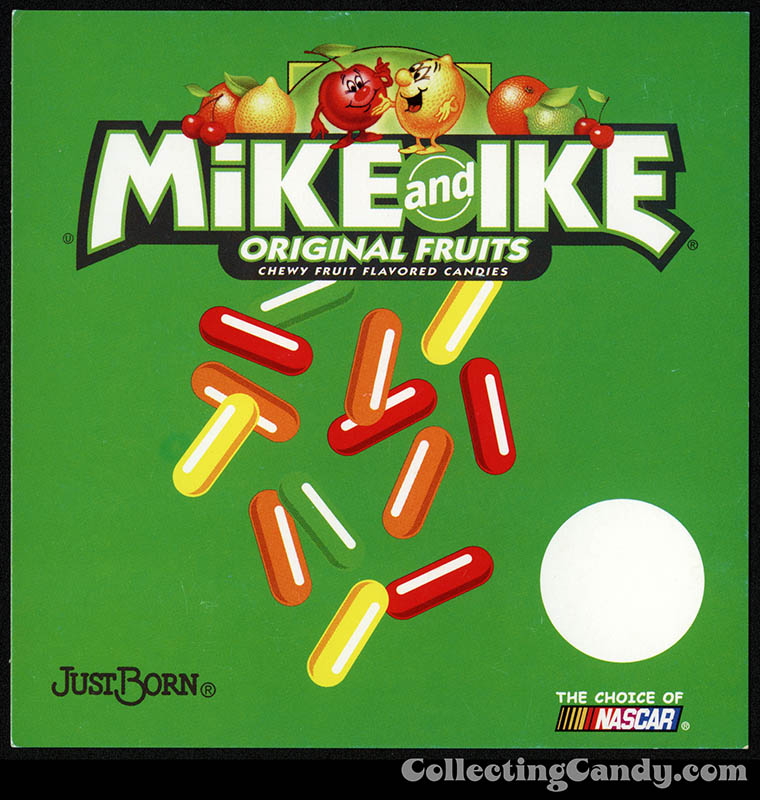 And here are the Hot Tamales vend cards showing the same evolution and progression: 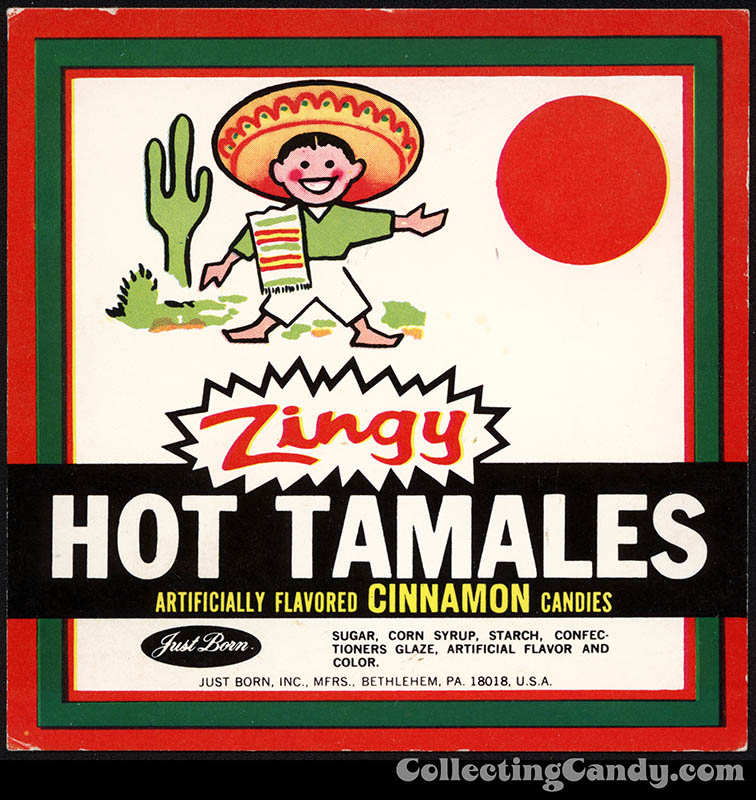 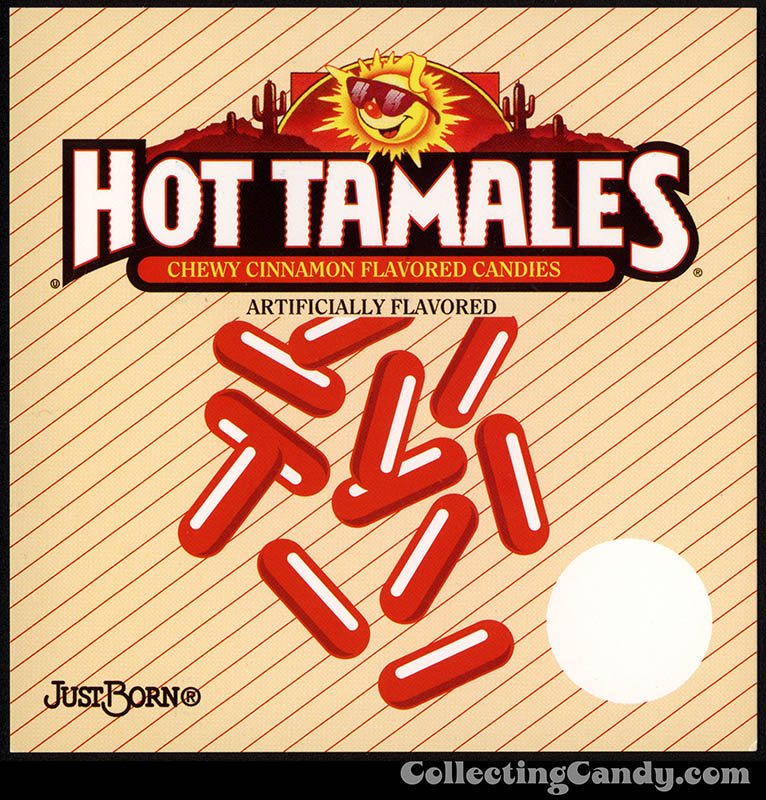 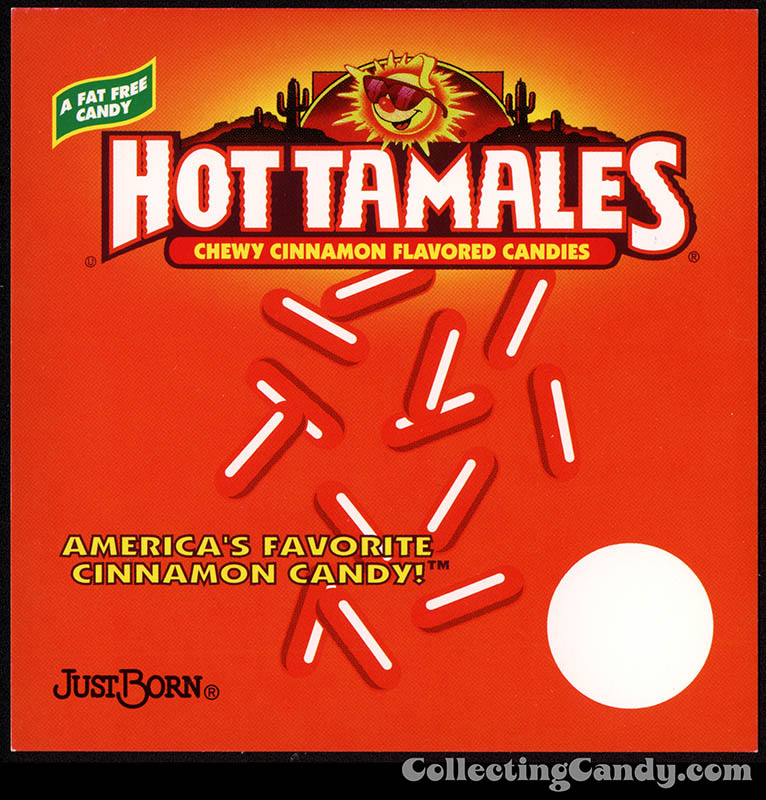 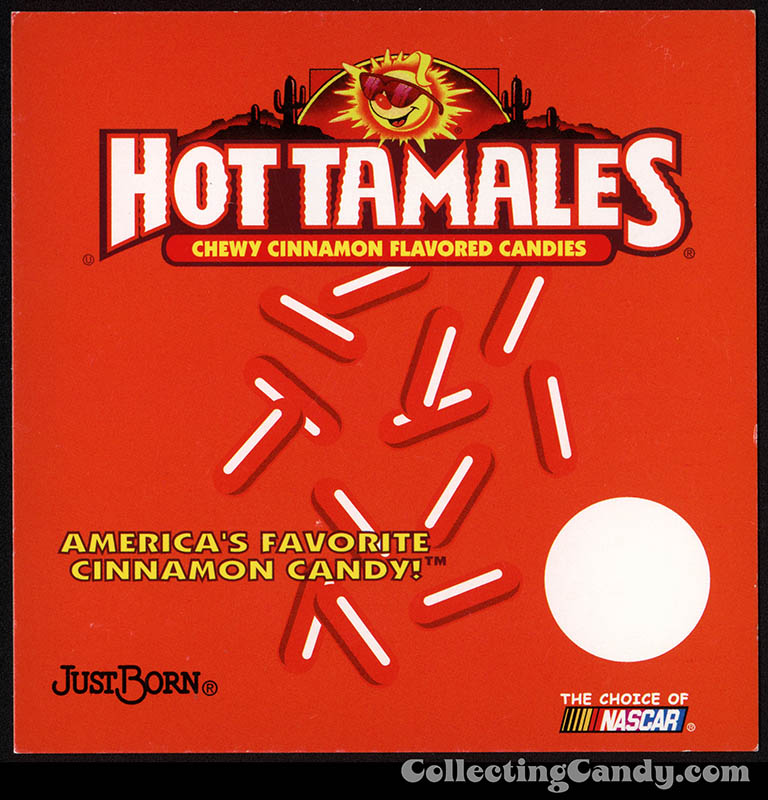 Now that you’ve gotten to see them individually here they are all brought together for easy visual contrast and comparison: 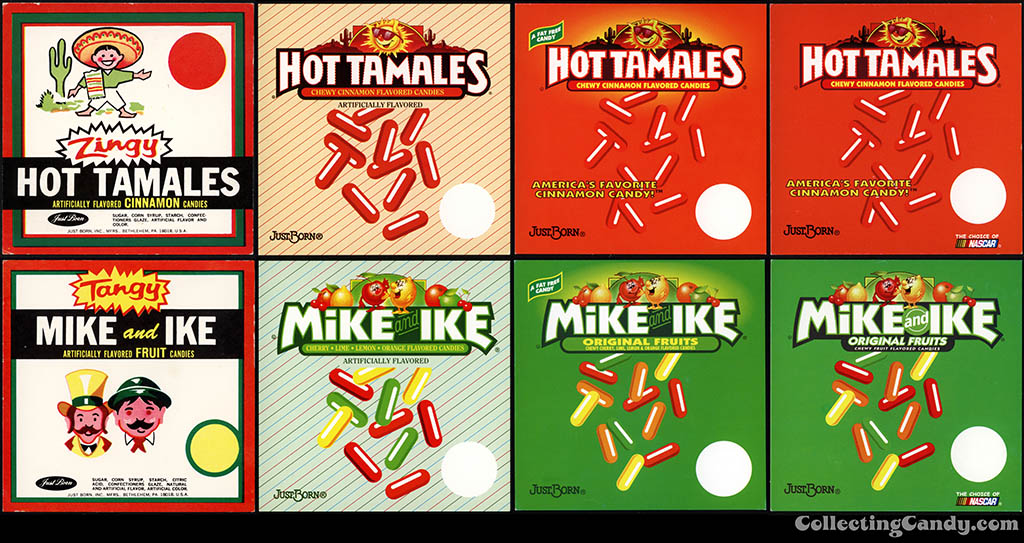 The earliest versions of these vend cards were the ones I had the most trouble tracking down, so it was thrilling to finally add them to my collection and to be able to bring today’s coverage together.

When I acquired the earliest Mike and Ike vend card example, I was surprised to find an additional Just Born vend card, and it was one I’d never heard of before: 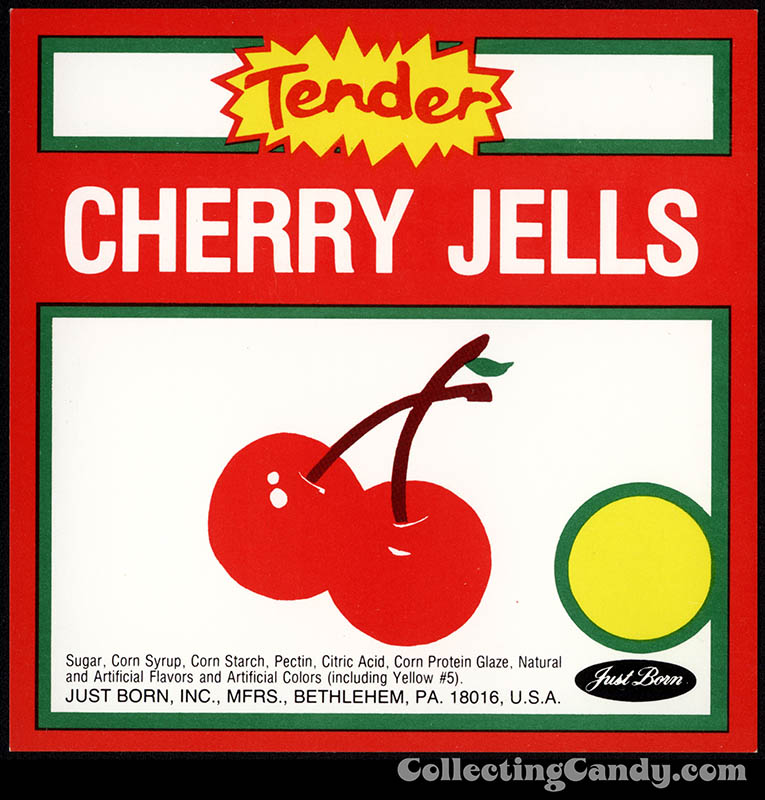 As you can see, this vend card for “Cherry Jells” matches the design of the other early Just Born vend card examples.  What makes this piece remarkable is that it represents a Just Born product I’d never encountered, at least not under this name.  My suspicion is that “Cherry Jells” are simply the cherry-flavored Mike and Ike candies that can be found in various flavor assortments, or most famously in Just Born’s classic Cherry and Bubb variety, which were wonderfully brought back into circulation in 2012 along with Lem and Mel.

So that’s everything I’ve got on the detailed look back at Just Born’s vending machine insert cards over the years.  I hope you enjoyed it. 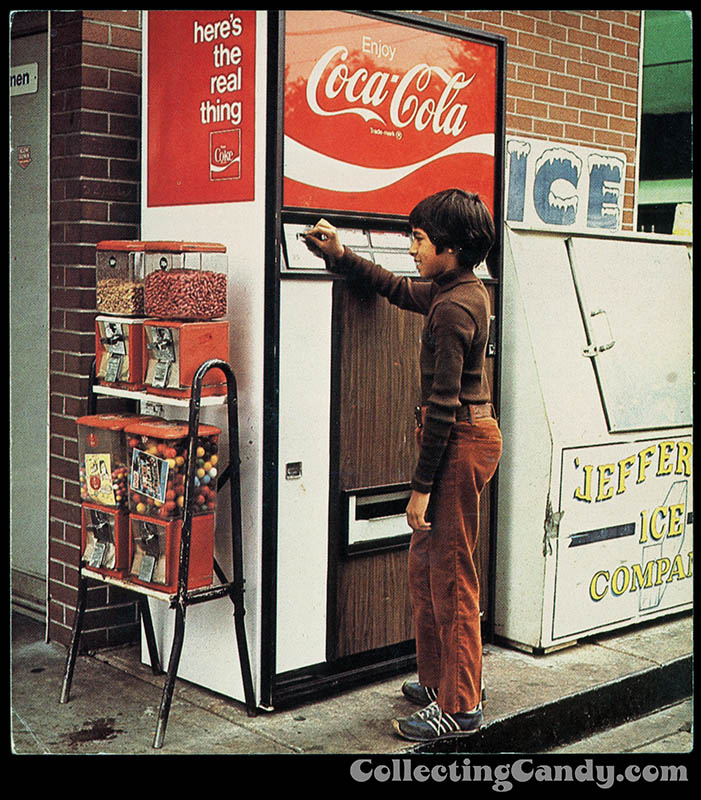 A New York City based writer, editor and sometimes actor. After spending much of the 1990′s in the comic book business helping tell the stories of Marvel Comics’ X-Men as series editor, he has since split his time between developing his own entertainment properties while still consulting and working on others. Having been described as “the Indiana Jones of lost and forgotten candy”, Jason is one of the country’s premier candy collectors and historians with his discoveries appearing in countless blogs, magazines, newspaper articles, and books. Always happy to share his knowledge and unique perspectives on this colorful part of our popular culture, Jason has consulted with New York’s Museum of Food and Drink and has also been a featured guest on Food Network’s Heavyweights, France’s M6 Capital, and New York’s TheActionRoom.com. My Google Profile+
View all posts by Jason Liebig →
This entry was posted in 1970's, 1980's, 1990's, Timeline and tagged candy collecting, candy collection, candy collector, candy machine, candy wrapper collection, candy wrapper collector, collectible, collecting candy, confectionery, confections, Hot Tamales, Just Born, JustBorn, Mike & Ike, Mike and Ike, packaging, sweets, vend, vending, vintage candy wrapper, wrapper. Bookmark the permalink.