Today I’m featuring a pair of Valentine’s releases from Necco that are all-new this year.  The first is a groovy take on their classic Sweethearts conversation hearts candies:  Sweethearts Hot Hearts vs Cool Hearts.  In addition to that I’ll also be showcasing Necco’s innovative new Color-Your-Own Sweethearts as well as a few other conversation heart pieces I’ve picked up since last year.

So get ready for our Valentine’s Day coverage with Sweethearts Hot Hearts vs Cool Hearts!

Sweethearts Hot Hearts vs Cool Hearts is a pretty awesome bit of marketing and the packaging for these is great, too.  This follows a trend I first noticed last Halloween with Necco’s Batwing Wafers.  That is, in spite of Necco having such a strong history and many ties to the past, it’s been gracing the marketplace with some bold new packaging designs and fun new product ideas.  I think these Sweetheart Hot Hearts vs Cool Hearts are pretty striking, so let’s get to them.

The display box features the Hot Hearts vs Cool Hearts graphics and text:

Opening the lid reveals the assortment of two flavors, split down the middle and segregated each to their own side.  This further brings home the Hot vs Cold team visual:

I’m especially fond of hot cinnamon candy (I dedicated a week to the subject late last year with CollectingCandy.com’s Cinnamon Hot Week) so I gravitated toward the Sweethearts Hot Hearts first.  Hot cinnamon flavor candies lend themselves to fire and devil graphics, and Hot Hearts gets a flame job worthy of a 1950’s roadster.  This may be the hot flavor, but boy is the box cool! 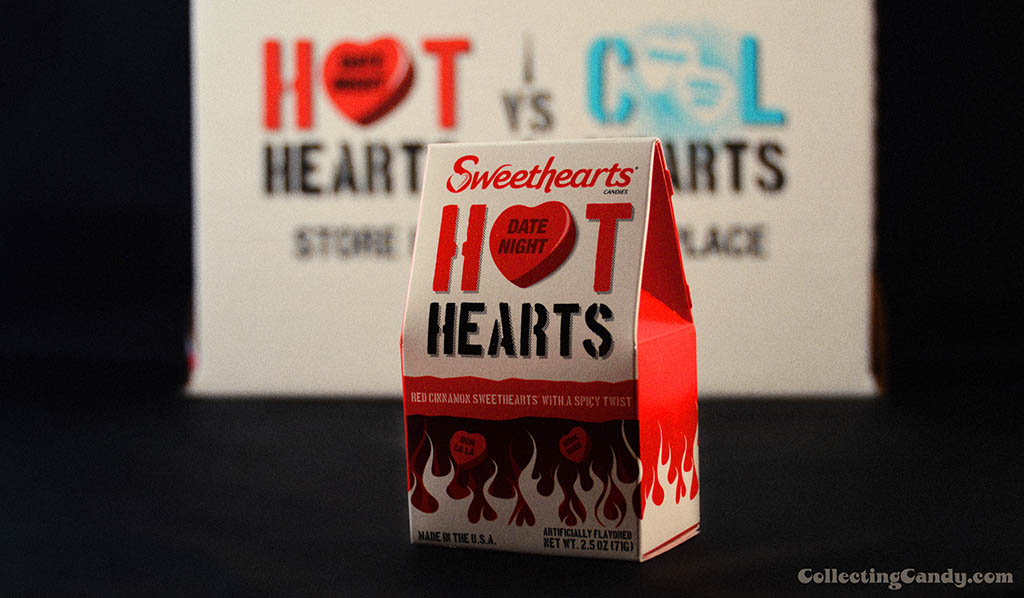 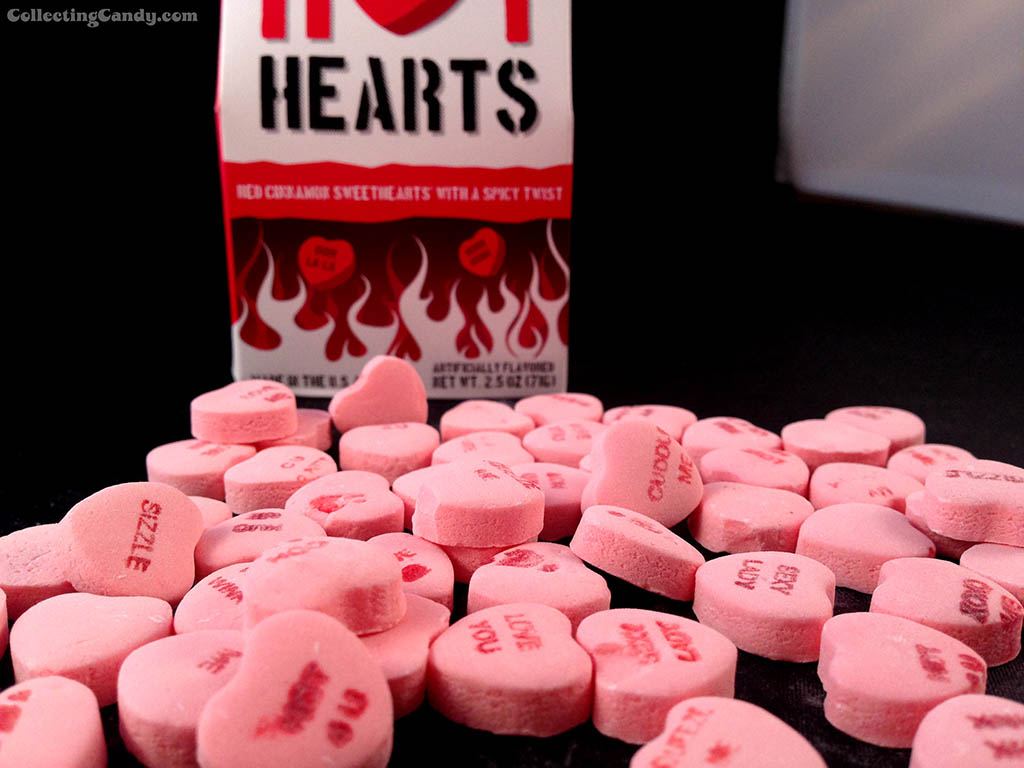 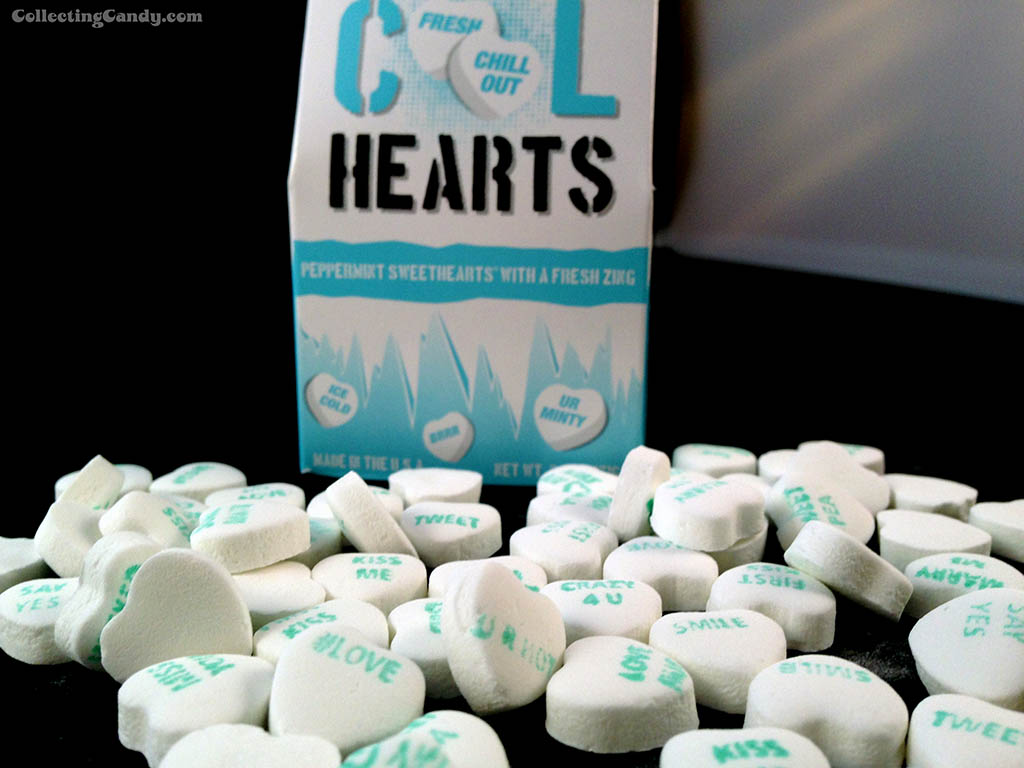 Here’s a look at the packages for both, flattened and scanned: 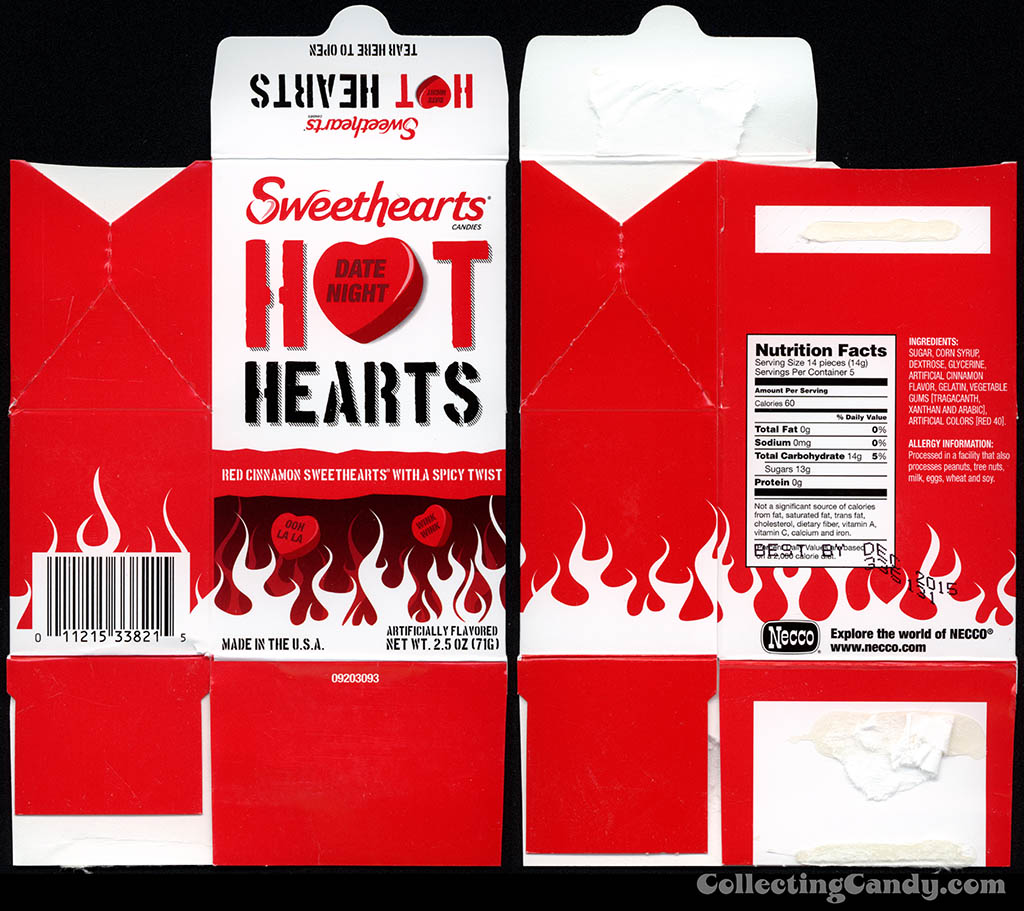 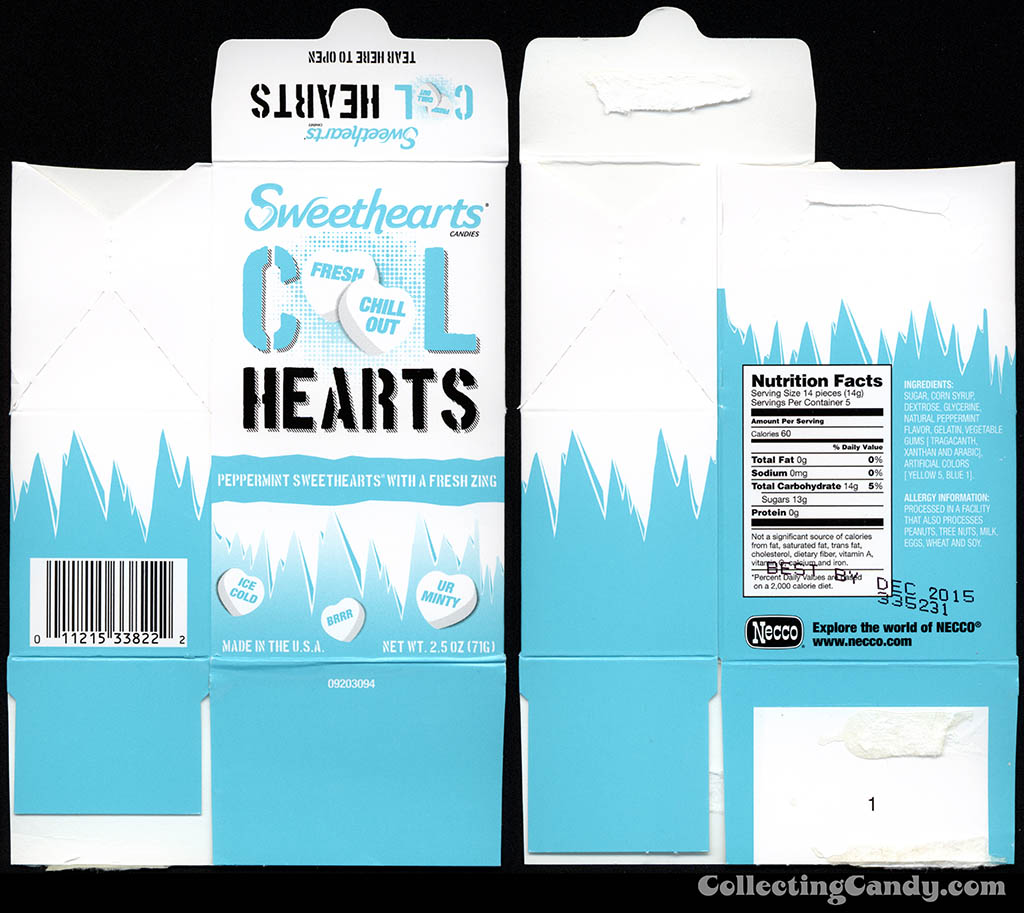 I think Necco’s Hot Hearts vs Cool Hearts is a great product featuring stellar packaging design and it’s one that has me excited to see what comes next for the company.

We don’t need to wait to find another innovative piece of Valentine’s packaging from Necco however, because along with Hot Hearts vs Cool Hearts they’ve also introduced Sweethearts Color-Your-Own packaging for the 2014 Valentine season!

The concept here is just like it sounds – the Sweethearts Color-Your-Own box is designed in such a way to allow for easy coloring-in of the existing Valentine line graphics while leaving white space for new illustrations.

It really is a first of its kind candy package and required extra attention to make it possible.  Necco made sure to change the outside of the box from a standard glossy format to a texture and material that would accept all kinds of media to draw upon it – even crayon and colored pencil are welcome.  Here’s a look at scans of one of the boxes: 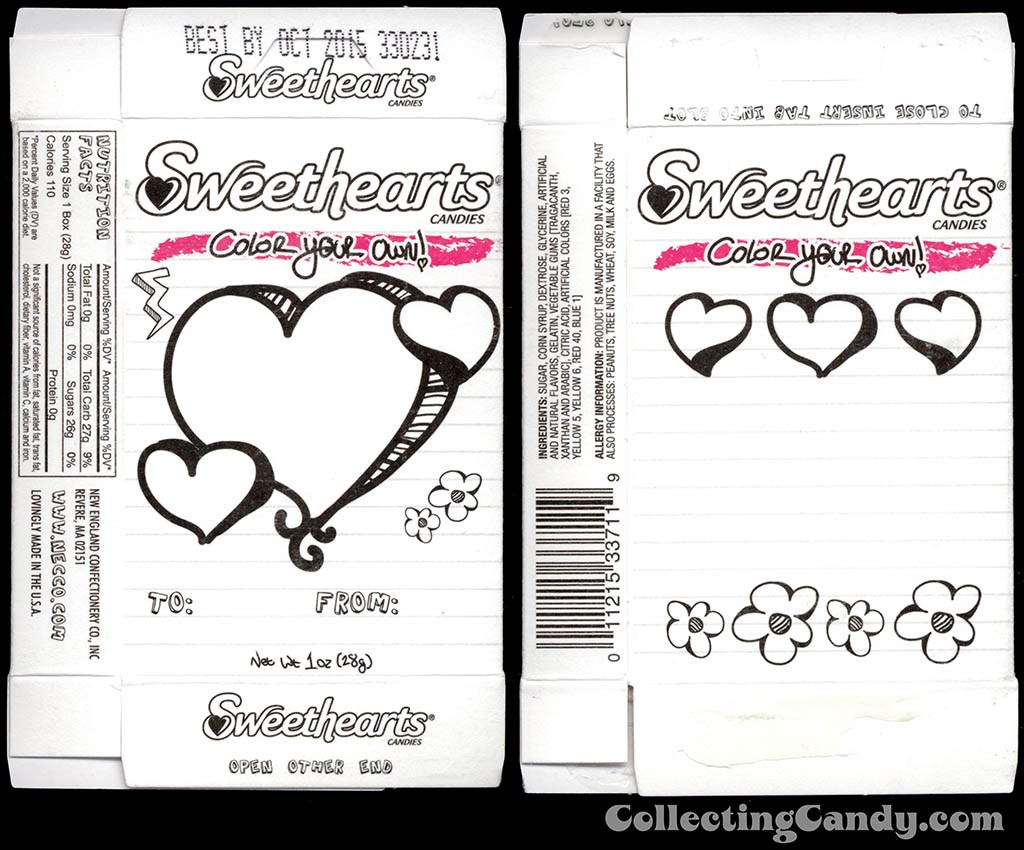 I can see all ages of people getting a kick out of this, though I’d think it’s certainly going to appeal to younger kids.  This year Necco is sponsoring a “Color Your Own” contest.

Here’s what the Color Your Own contest page looks like at the Necco site: 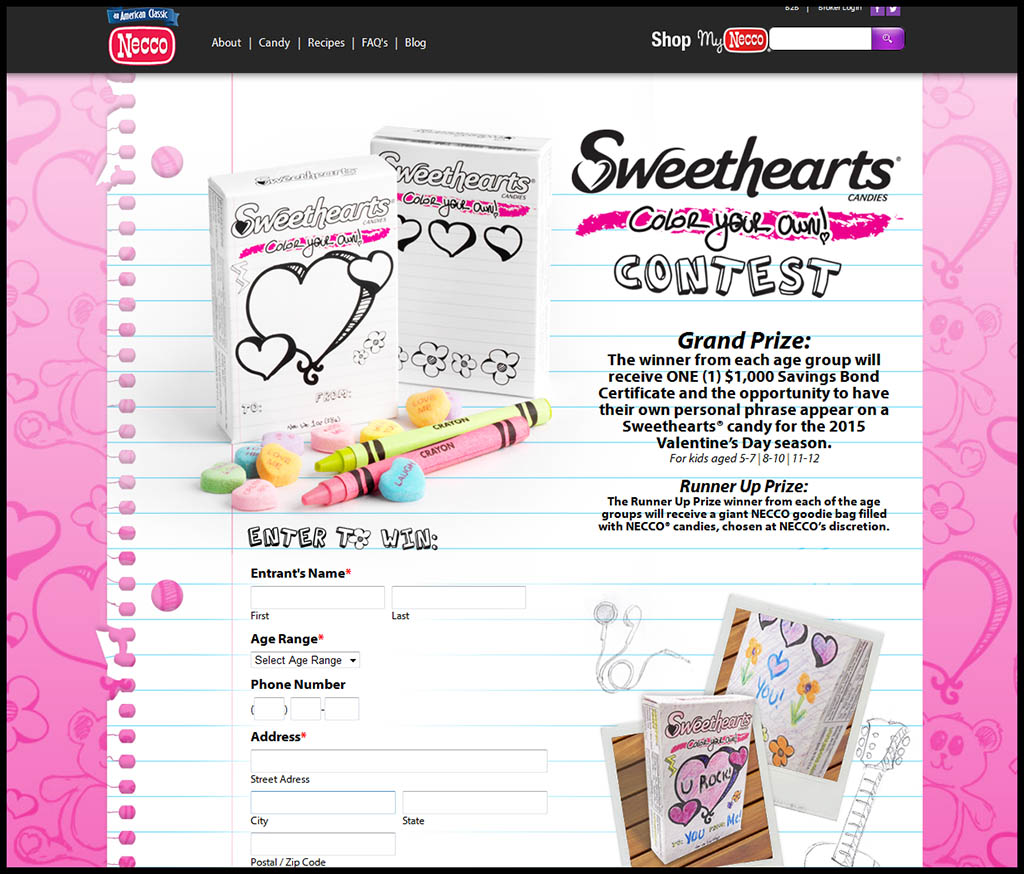 Sweethearts Color Your Own contest – 2014 webpage

Looks like a lot of fun, and I think these “color your own” boxes are an instant classic.

After writing up CollectingCandy.com’s history of Sweethearts conversation hearts last year, I promised myself that in 2014 I was going to track down as many of the boxed conversation hearts versions as I could find for my collection – especially the more unusual editions.   With that in mind – here are some of the other conversation heart pieces I picked up this year:

First up – Necco’s Sugar Free Sweethearts – I found two different boxes for them: 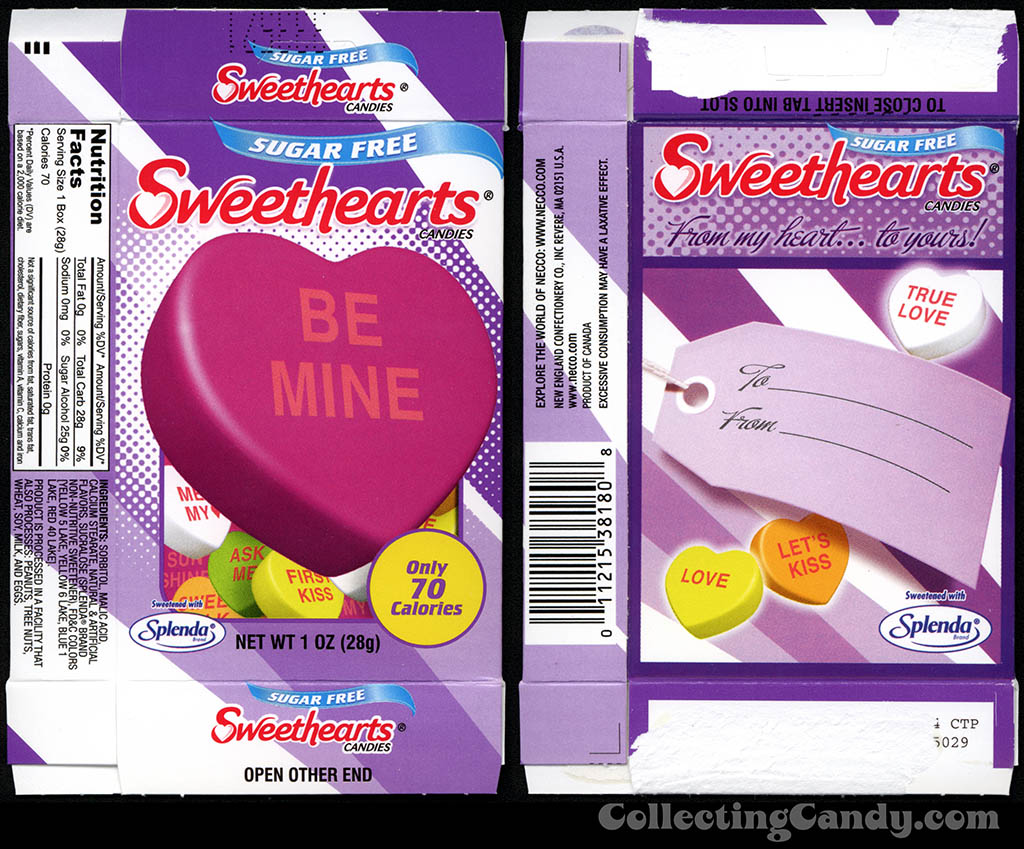 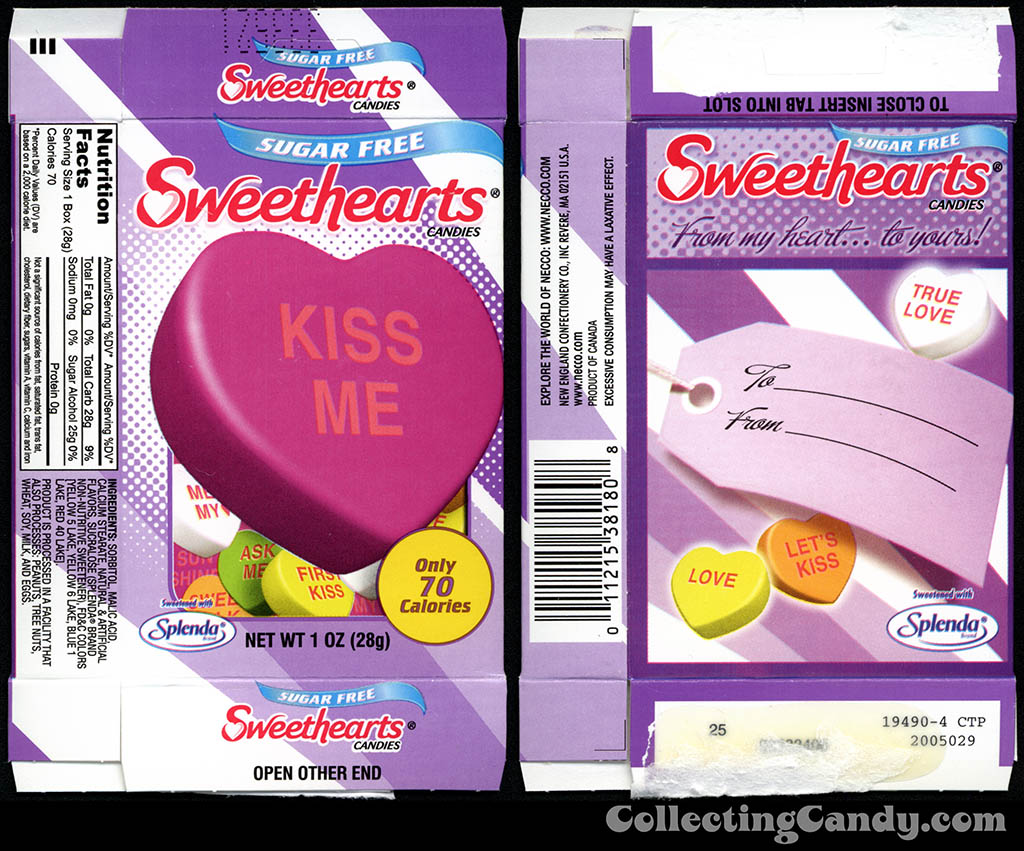 The look of the sugar-free Sweethearts heart candies is significantly different than that of the standard versions, as the messages are not printed-on but rather are a part of the pressed shape: 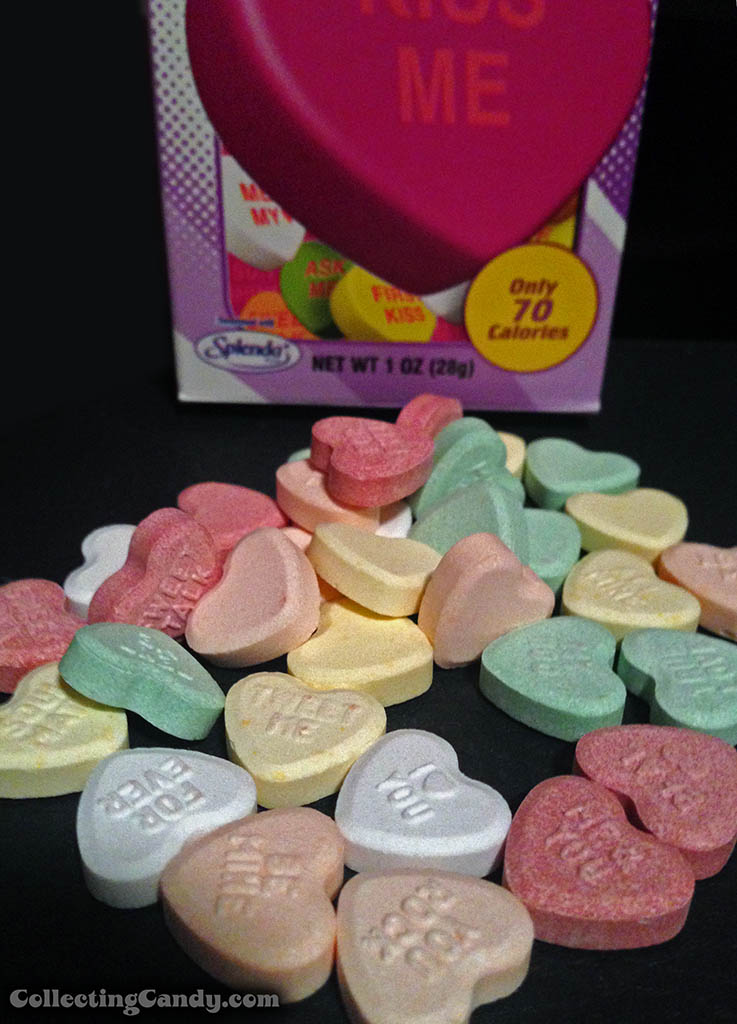 Another release from Necco I had hoped to find this year was for their Sweethearts En Español edition.  And find them I did:

I also found a few more box variations on the standard Sweethearts as well as one for the Dazzled Tarts I didn’t have previously: 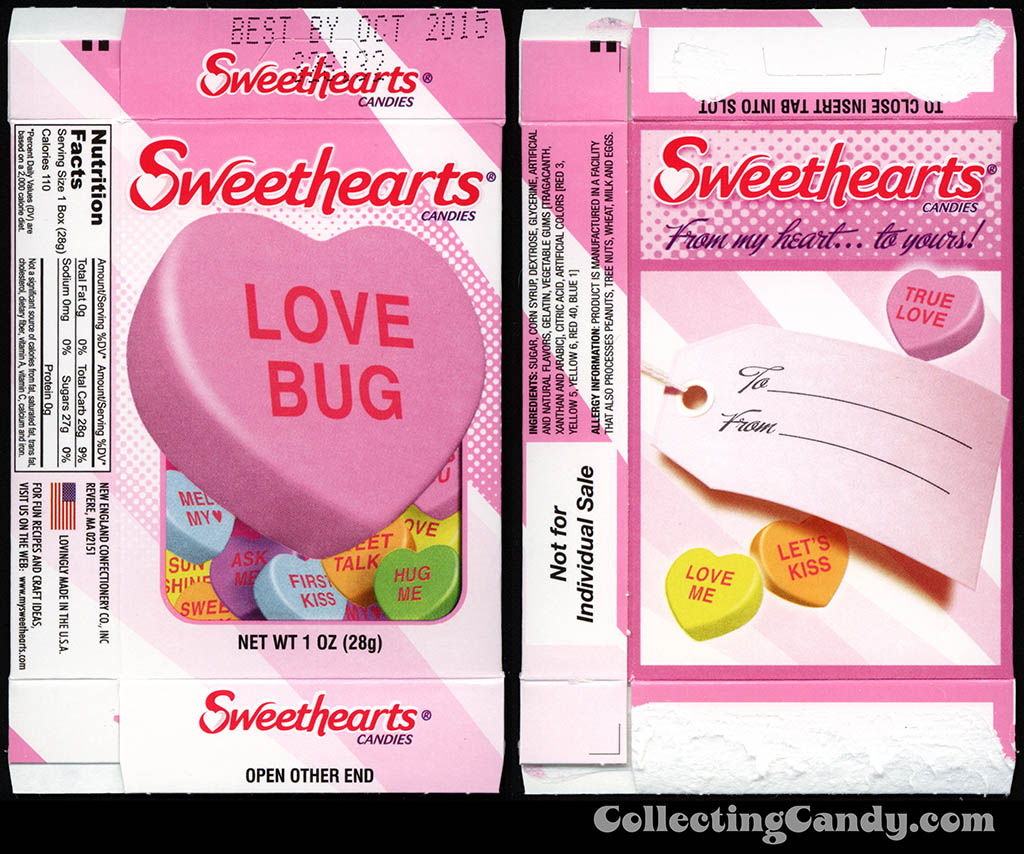 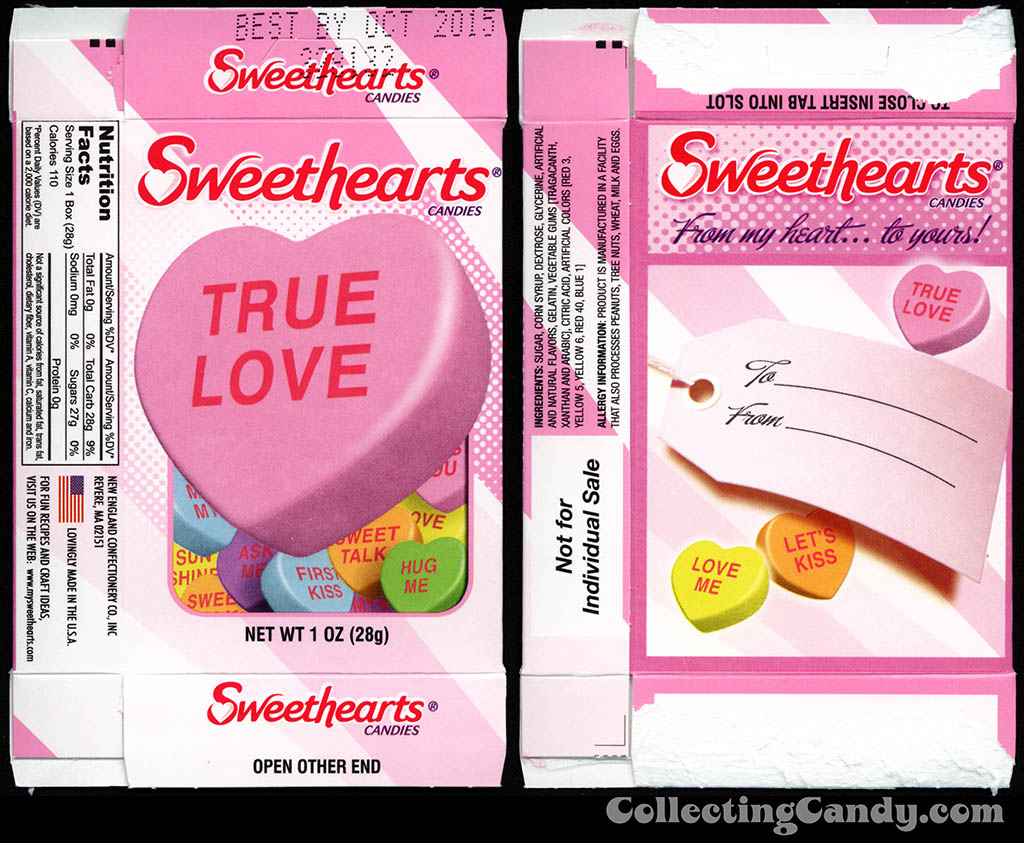 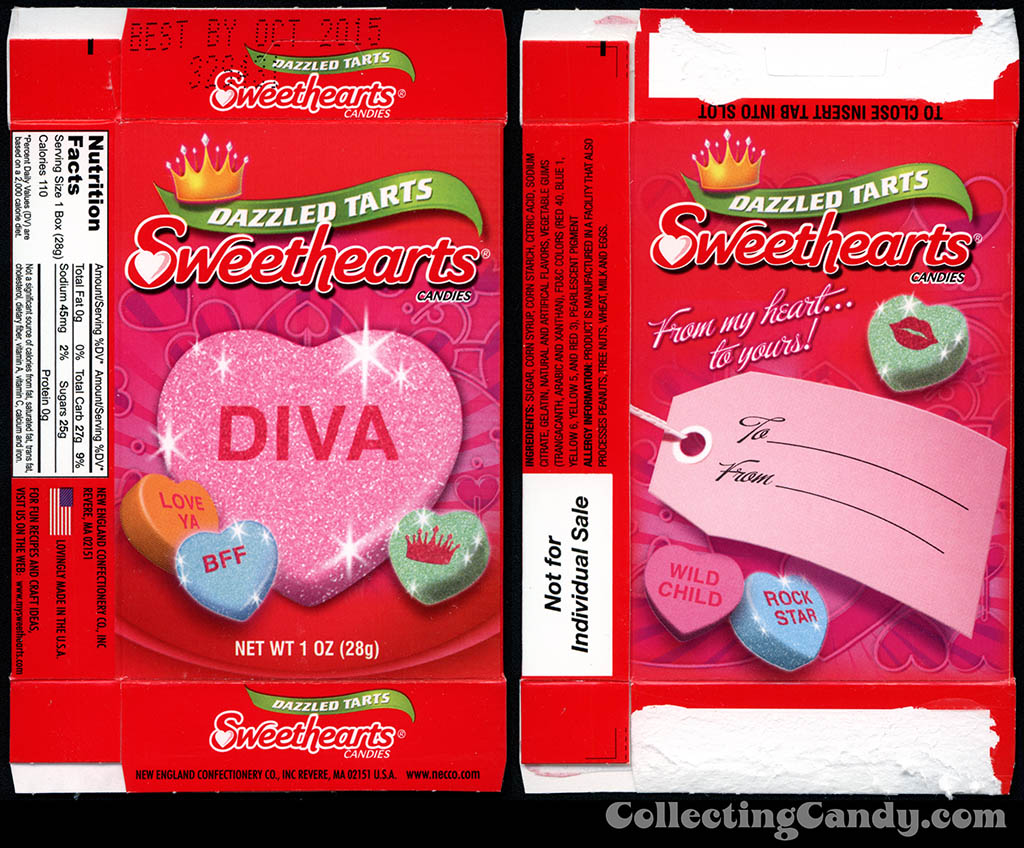 While going through my archives for Valentine’s posts this week, I came across an item I forgot to include last year – a retired Brach’s conversation hearts box from 2010: 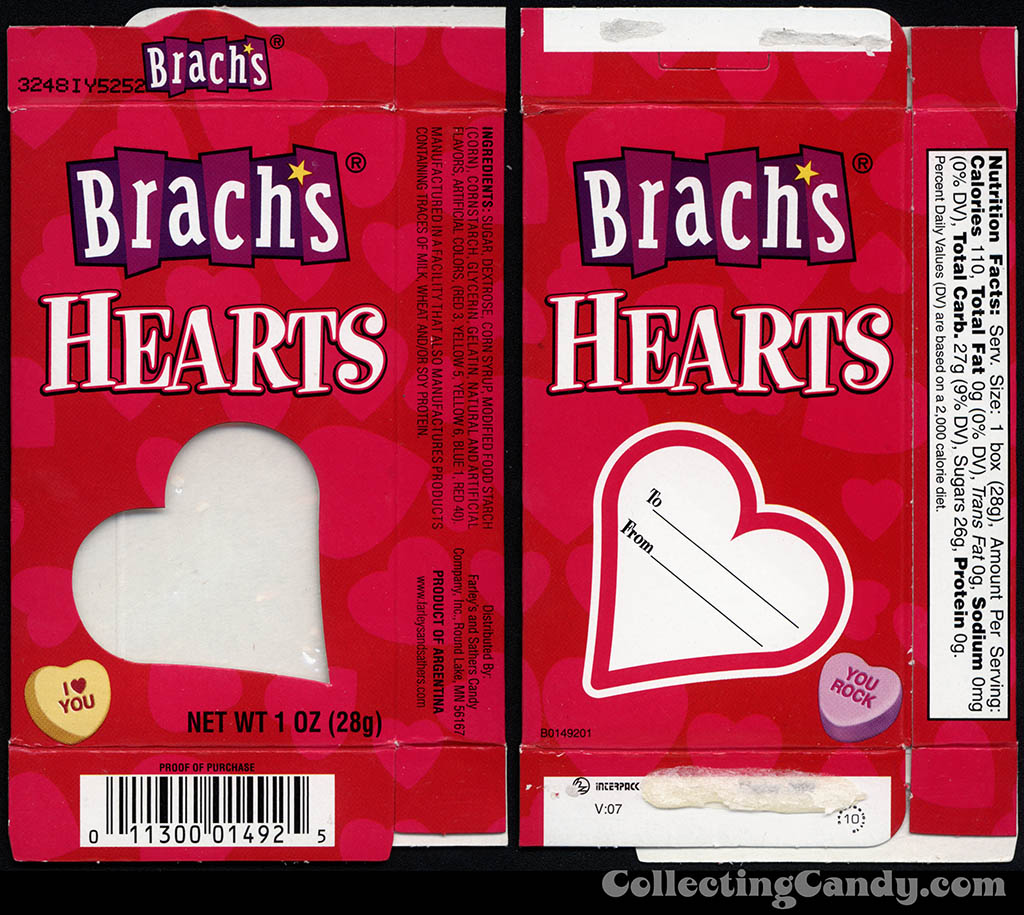 These days Brach’s has their HeartLines brand of conversation hearts and while candy-hunting this year I found two different flavors of them: 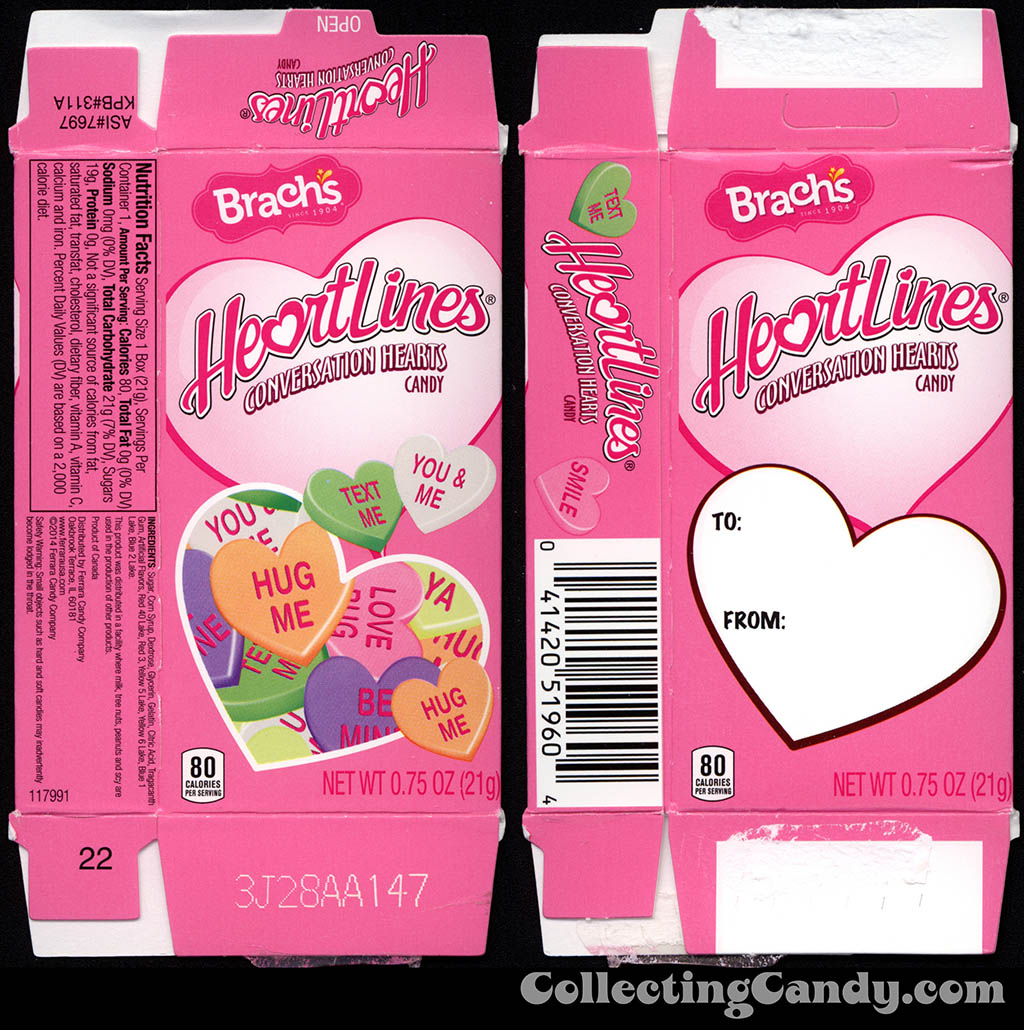 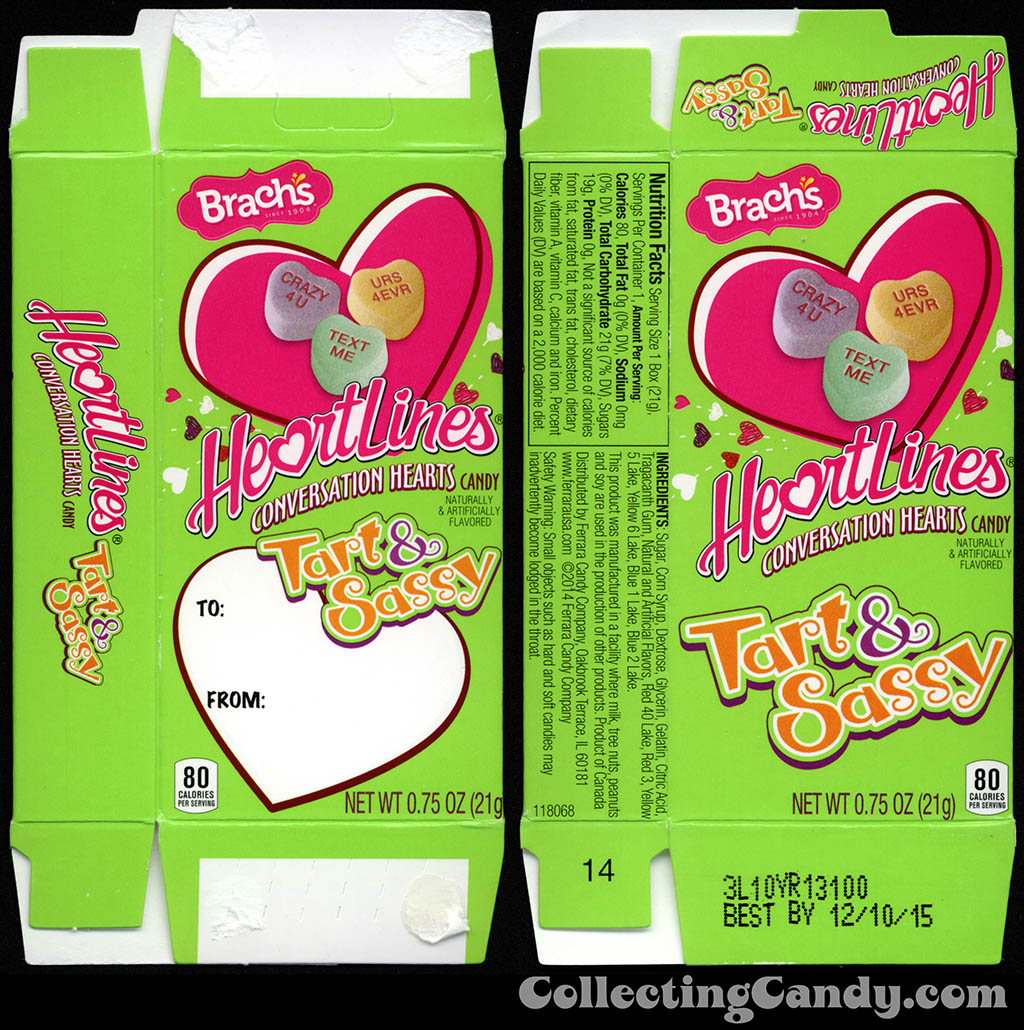 Finally, the last piece I want to share today is one that doesn’t fit in perfectly with the rest as it isn’t for conversation heart candies.  However, these are Valentine’s candies and they are heart-shaped so it’s close.  The box certainly presents itself with the look of a conversation hearts candy box – and I think it’s too fun not to include: 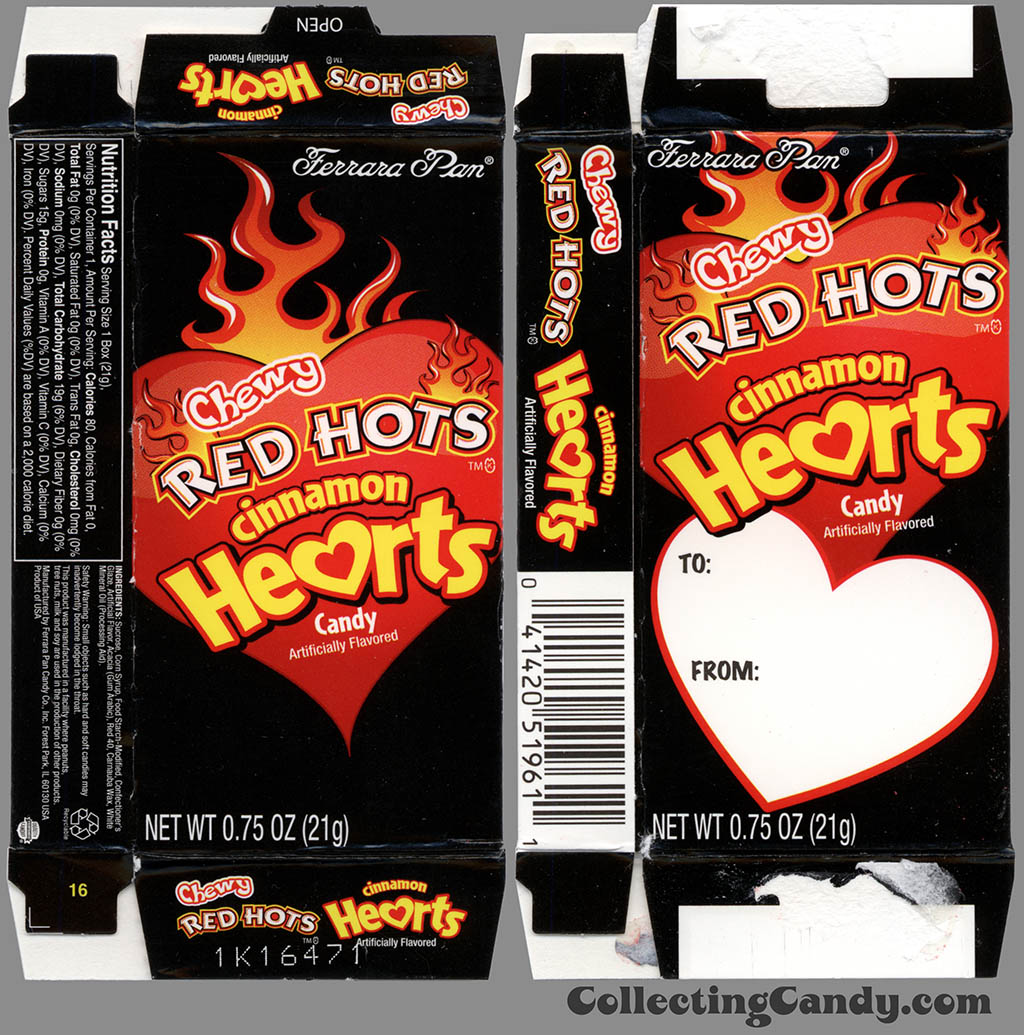 And that’s everything for today.  Happy Valentine’s Day and I’ll see you next time!

A New York City based writer, editor and sometimes actor. After spending much of the 1990′s in the comic book business helping tell the stories of Marvel Comics’ X-Men as series editor, he has since split his time between developing his own entertainment properties while still consulting and working on others. Having been described as “the Indiana Jones of lost and forgotten candy”, Jason is one of the country’s premier candy collectors and historians with his discoveries appearing in countless blogs, magazines, newspaper articles, and books. Always happy to share his knowledge and unique perspectives on this colorful part of our popular culture, Jason has consulted with New York’s Museum of Food and Drink and has also been a featured guest on Food Network’s Heavyweights, France’s M6 Capital, and New York’s TheActionRoom.com. My Google Profile+
View all posts by Jason Liebig →
This entry was posted in Boxed, Holiday and tagged candy collecting, candy collection, candy collector, candy wrapper collection, candy wrapper collector, collectible, collecting candy, confectionery, confections, conversation hearts, hearts, hot cinnamon, Necco, New England Confectionery Company, packaging, packaging design, Spanish, sugar-free, Sweethearts, sweets, vintage candy wrapper, wrapper. Bookmark the permalink.