Over the last two days I’ve covered the topics of 7-Eleven’s recent name brand private label releases as well as their launch of Slurpee-branded gum in the late 1990’s.  Today I’m rounding out the 7-Eleven theme by presenting a great release that has, thus far, been the last in the Slurpee gum story – 2003’s Slurpee Infused Gum!

After a few years of having Slurpee-branded gum on shelves, 7-Eleven brought in an outside firm to redesign the product and give it a bold, fresh look.  The result was a lineup of “Slurpee Infused” gum flavors, with each package receiving a striking fluorescent color scheme and its own distinctive mascot.  Here they are: 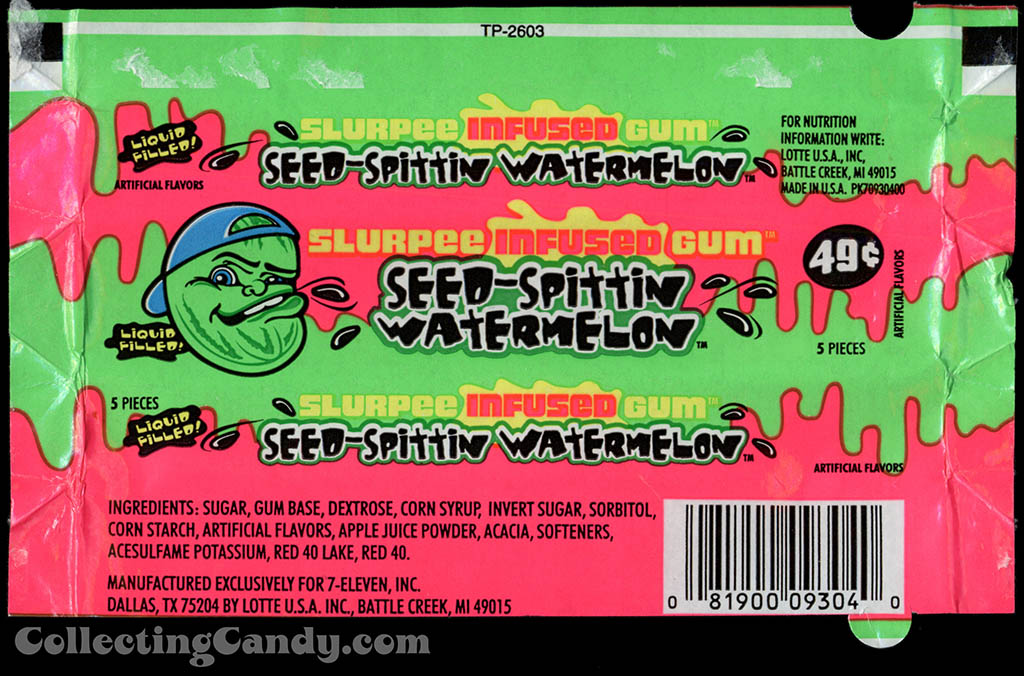 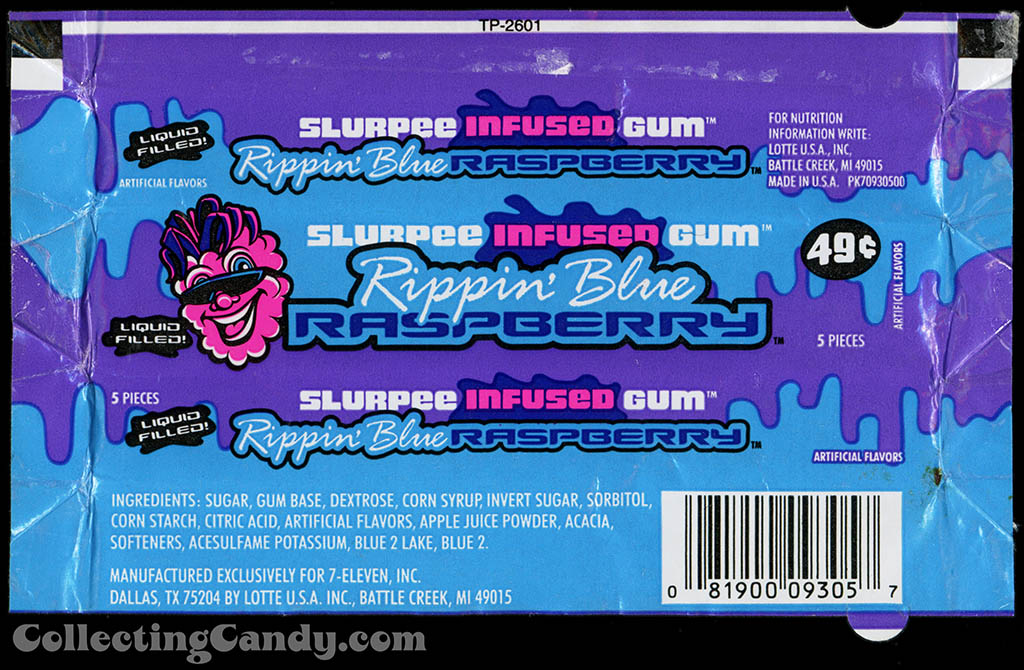 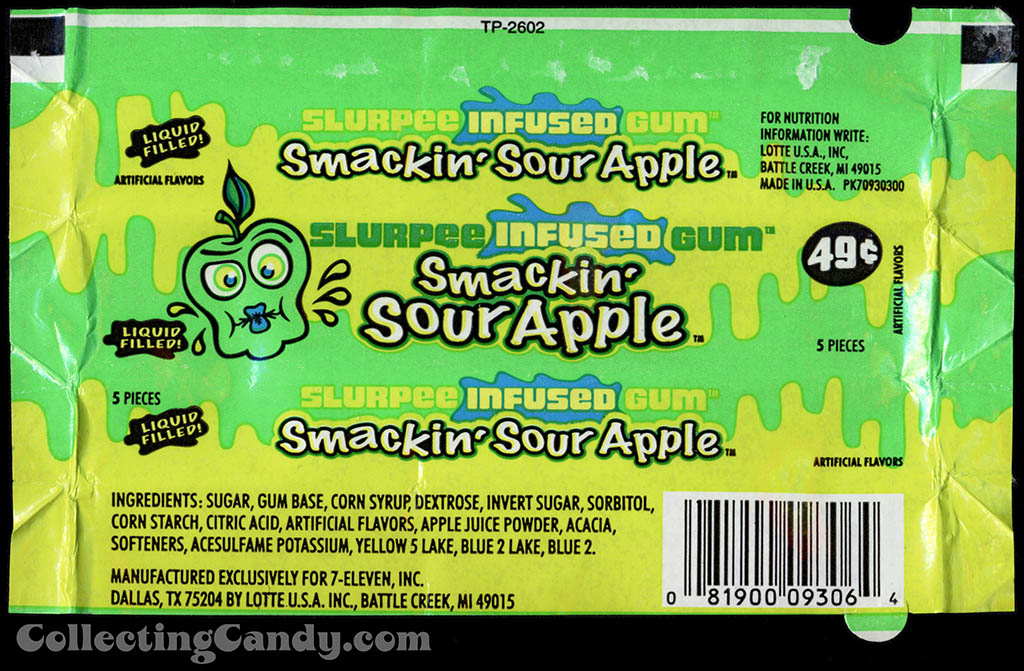 Unlike the previous four wrappers this next example lacks the 49-cent on-pack printed price.  It also features an ingredients list in two languages, French and English.  It makes me wonder if it might have been a wrapper version created for the Canadian market.

The final wrapper from my collection features an entirely bilingual design, which was almost certainly produced for Canadian distribution:

Those are the six wrappers I have in my collection and the only flavors of Slurpee-infused gum I’ve ever come across.  However, in researching the origins of the brand I uncovered the firm that handled the redesign for Slurpee gum: Think Neu Creative.  On the company’s website I discovered a wrapper design for an additional flavor that I’ve yet to track down an example of – Cabana Strawbana: 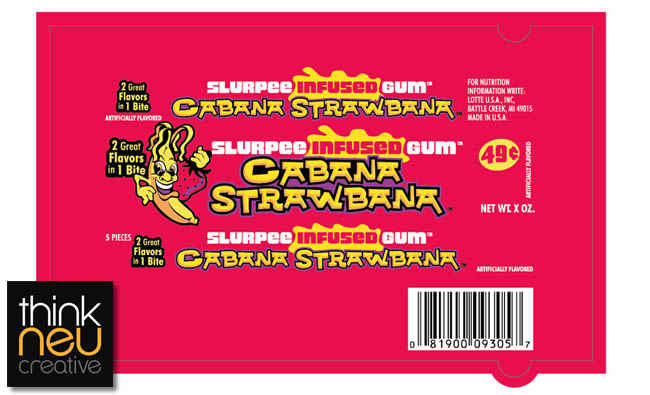 That’s all of ’em – they make for a pretty great gang of mascots, don’t you think?

As a collector I was quite happy to finally track these pieces down.  Though the Slurpee-Infused gum line ceased production only a decade ago, they still proved difficult to find.  But that’s the way it is with candy packaging – once it’s off store shelves, it’s gone!

I would love to see 7-Eleven lending the Slurpee name to new confectionery offerings and with them doing more and more private label products, I think it’s a real possibility.  I’m certainly crossing my fingers that it will happen – it’d be pretty cool.

That’s everything on the Slurpee-Infused gum lineup of 2003, and it also ends our three-day 7-Eleven focused coverage.  I hope you enjoyed it, and I’ll see you next time!

A New York City based writer, editor and sometimes actor. After spending much of the 1990′s in the comic book business helping tell the stories of Marvel Comics’ X-Men as series editor, he has since split his time between developing his own entertainment properties while still consulting and working on others. Having been described as “the Indiana Jones of lost and forgotten candy”, Jason is one of the country’s premier candy collectors and historians with his discoveries appearing in countless blogs, magazines, newspaper articles, and books. Always happy to share his knowledge and unique perspectives on this colorful part of our popular culture, Jason has consulted with New York’s Museum of Food and Drink and has also been a featured guest on Food Network’s Heavyweights, France’s M6 Capital, and New York’s TheActionRoom.com. My Google Profile+
View all posts by Jason Liebig →
This entry was posted in Bubble Gum, Gum and tagged 2000's, 7-11, 7-Eleven, bubblegum, candy collecting, candy collection, candy collector, candy wrapper collection, candy wrapper collector, collectible, collecting candy, confectionery, confections, Freshen Up, liquid-filled gum, mascots, packaging, private label, Seven Eleven, sweets, vintage candy wrapper, wrapper. Bookmark the permalink.