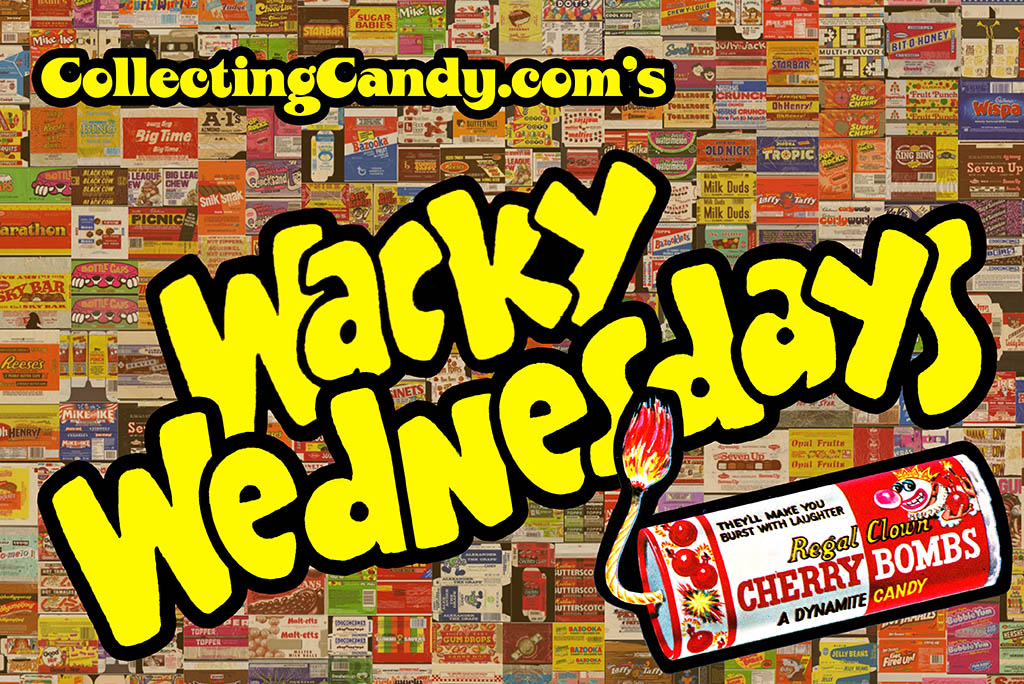 It’s been quite a while since I last did a Wacky Wednesdays column here on the site but a recent find meant that it was time.  After searching for several years for a Regal Crown Sour Cherry wrapper, the basis for this Wacky sticker, I finally tracked one down.  Today, I am excited to feature a parody from the 16th and final 1970’s Wacky Packages series – Regal Clown Cherry Bombs!

Wacky Packages’ 16th series was released in 1976 and would be the end of the original series epic run.  Wackys would return a few short years later with a series of reprints, but 1976 was definitely the end of an era.  Within that final series of Wacky Packages was a parody sticker based on a roll candy called Regal Crown Sour Cherry.  Here’s a closer look at the original sticker for Regal Clown Cherry Bombs: 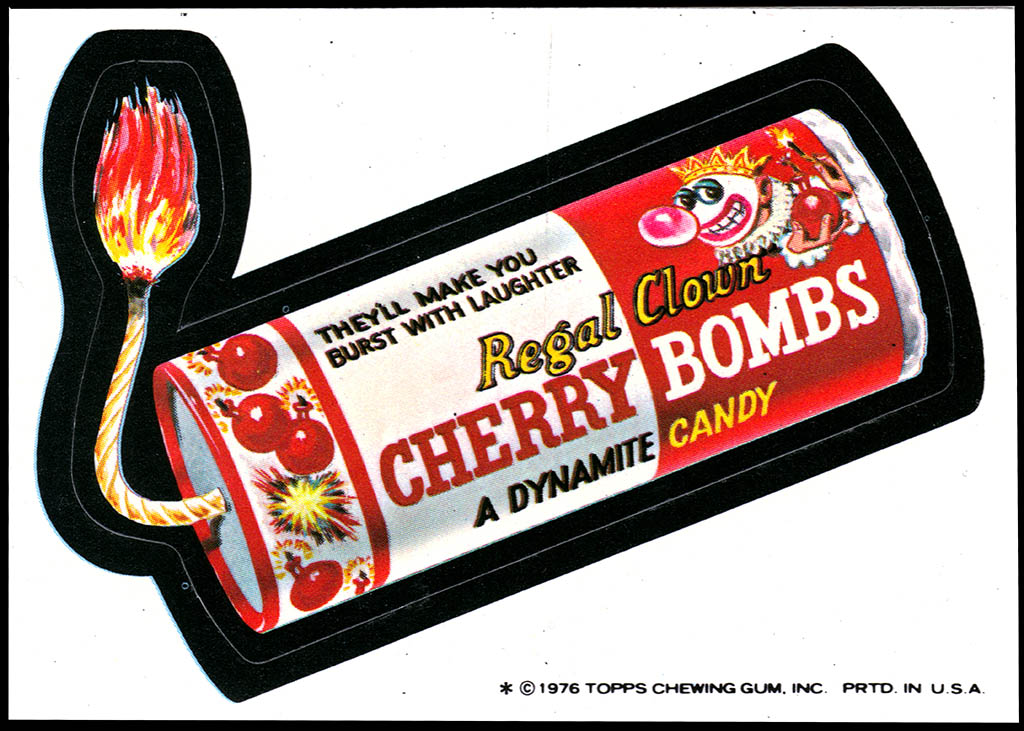 As I said earlier I’d been hunting for an early 70’s Regal Crown Sour Cherry wrapper for a few years and I finally acquired one just last month, but the story of how it came to be uncovered is a good one:

A gentleman in Iowa was helping his friend clean out a warehouse that the friend owned and it so happened that this warehouse had at one time been a roller skating rink.  When it was first built, to round out the corners of the rink, there were curved wooden platforms created and those rink corners were still in place in the warehouse in 2012.  Upon moving one of these platforms they were surprised to find what must have been a weekend’s worth of trash swept underneath.  Among that 40-year-old stash of trash was an assortment of candy, including the following beat-up 1970’s Regal Crown Sour Cherry wrapper – the first one I’ve ever come across: 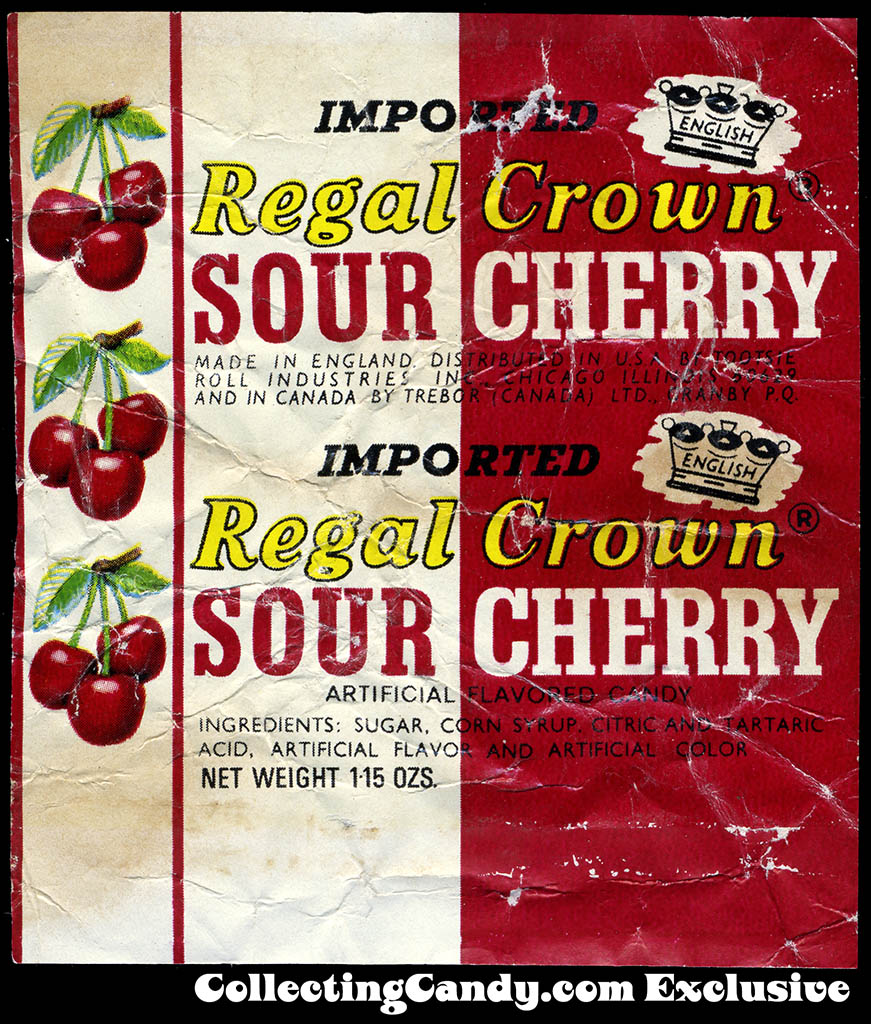 It might not be in the best of shape but it’s wonderful to finally have an example of one of these wrappers at all.

Here’s a shot of the sticker side-by-side with a quick mockup I created with the original wrapper put in place on the Wacky (Note:  I took some Photoshop liberties, pumping up the deeper reds on the Regal Crown wrapper to more closely match those on the Wacky Packages art):

That’s everything for this Wacky Wednesdays comeback post.  I’m hoping to line up at least a few more of these for the next couple of months though it all depends on if I can gather the materials.

A New York City based writer, editor and sometimes actor. After spending much of the 1990′s in the comic book business helping tell the stories of Marvel Comics’ X-Men as series editor, he has since split his time between developing his own entertainment properties while still consulting and working on others. Having been described as “the Indiana Jones of lost and forgotten candy”, Jason is one of the country’s premier candy collectors and historians with his discoveries appearing in countless blogs, magazines, newspaper articles, and books. Always happy to share his knowledge and unique perspectives on this colorful part of our popular culture, Jason has consulted with New York’s Museum of Food and Drink and has also been a featured guest on Food Network’s Heavyweights, France’s M6 Capital, and New York’s TheActionRoom.com. My Google Profile+
View all posts by Jason Liebig →
This entry was posted in 1970's, Topps, Wacky Packages and tagged candy collecting, candy collection, candy collector, candy wrapper collection, candy wrapper collector, collectible, collecting candy, confectionery, confections, Lifesavers, packaging, parody sticker, roll candy, sweets, Topps, vintage candy wrapper, Wackies, Wacky Packages, Wacky Packs, wrapper. Bookmark the permalink.