Happy New Year everyone!  It’s my pleasure to kick off CollectingCandy.com’s 2014 coverage with the world premiere of a wrapper that has not only been on my want list for a long time but is also one that I’m confident will take readers by surprise.  Today I get to share a piece that until recently had evaded my most intense of collector searches and safaris.  All the way back from 1969, it is the wrapper for Nabisco’s “The Wild One”!

The Wild One will likely be an unfamiliar name to readers as according to my research it may have only ever been distributed in the Northeast.  I first became aware of the bar’s existence when I found the following trade clipping from January 1969: 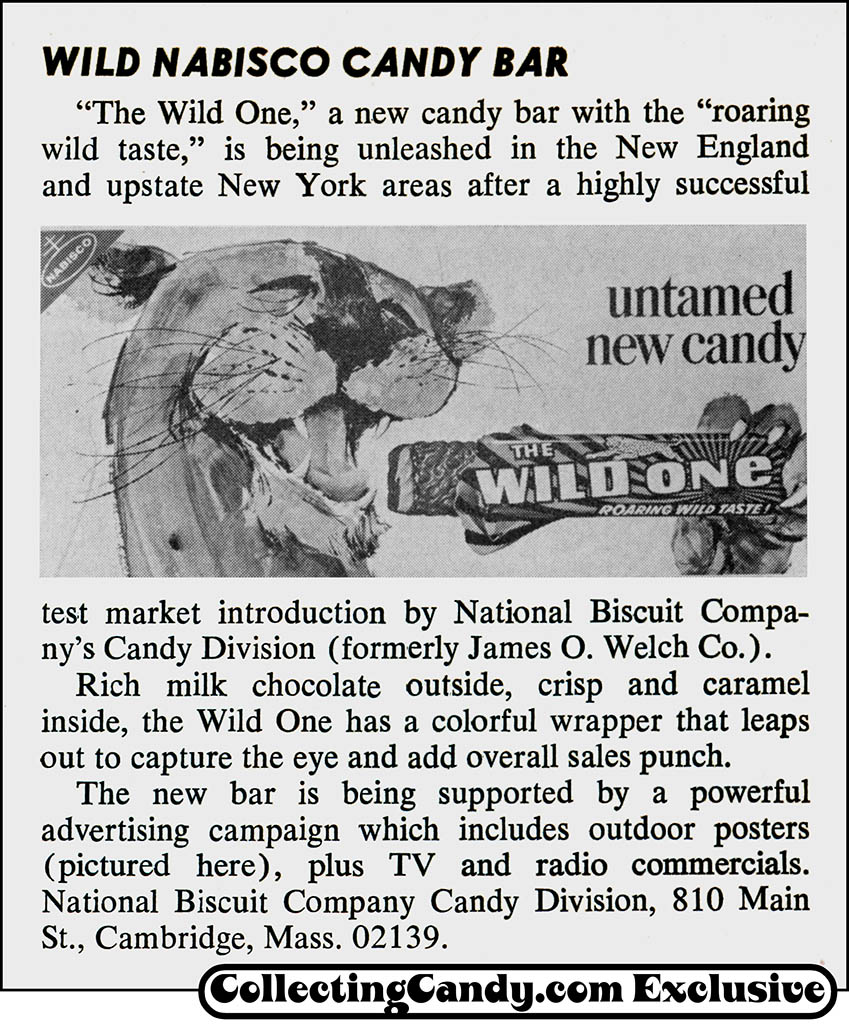 According to that piece, The Wild One was test marketed in 1968 before receiving a broader rollout in the New England and Upstate New York areas.  I should note that while I was not able to find any evidence of a nationwide release for the bar, that does not preclude it from every having received wider distribution.

It was that 1969 trade clipping that originally put Nabisco’s The Wild One wrapper on my collecting radar, and on my want list.  But with the knowledge of it being a regional release from over 40 years ago, I assumed I might never come across one.  My fortunes changed recently when a gentleman in Schenectady, New York found an example of one of these beautiful wrappers in amongst a group of non-sport trading card material from the early 1970’s.  My hunt for this exotic confectionery beast had finally succeeded and there it was.

After only knowing The Wild One through the black and white image above, I was blown away when I finally witnessed the wrapper in full-color.  Here it is in all its glory:

To my eye this is one of the most striking candy wrappers I’ve ever encountered.  The fact that it comes from 1969 only makes it more remarkable as there just wasn’t anything similar-looking in the candy isle at the time.  With elements that evoke part circus poster and part movie poster it really is one-of-a-kind and I’m beyond thrilled to finally add it to my collection.  I hope you dig my coverage of it.

And that’s everything for our first post of 2014 – see you next time!

A New York City based writer, editor and sometimes actor. After spending much of the 1990′s in the comic book business helping tell the stories of Marvel Comics’ X-Men as series editor, he has since split his time between developing his own entertainment properties while still consulting and working on others. Having been described as “the Indiana Jones of lost and forgotten candy”, Jason is one of the country’s premier candy collectors and historians with his discoveries appearing in countless blogs, magazines, newspaper articles, and books. Always happy to share his knowledge and unique perspectives on this colorful part of our popular culture, Jason has consulted with New York’s Museum of Food and Drink and has also been a featured guest on Food Network’s Heavyweights, France’s M6 Capital, and New York’s TheActionRoom.com. My Google Profile+
View all posts by Jason Liebig →
This entry was posted in 1960's, 1970's, Chocolate and tagged candy collecting, candy collection, candy collector, candy wrapper collection, candy wrapper collector, cat, cheetah, collectible, collecting candy, confectionery, confections, leopard, Nabisco, packaging, sweets, tiger, vintage candy wrapper, wrapper. Bookmark the permalink.