Twelve Days of Christmas: Gingerbread for 2013!

Today we’re kicking off our 2013 Twelve Days of Christmas series with a look at some new gingerbread-flavored candy.

Today’s post will showcase the great new limited edition releases of 2013 that all bring gingerbread flavoring into the mix.  Including two fun new releases from the M&M/Mars company – Gingerbread M&M’s and Twix – as well as Just Born’s delightful new Gingerbread Marshallow Peeps!

The last few years, Mars has been pretty steady with specialty holiday releases, especially where M&M’s are concerned, but seeing a specialty flavor represented across two of their brands is unusual.

M&M’s Gingerbread is a new limited edition for 2013 and this year it’s a Walmart exclusive flavor.  Target had exclusive bragging rights this year for their Halloween M&M’s Pumpkin Spice, so I guess it was Walmart’s turn to get the exclusive for Christmas.  Here’s the package:

The M&M’s Gingerbread packaging looks great with a gingham-esque design on each end that works well to bring a sense of “home-for-the-holidays.”  Interestingly, the gingerbread man element of this design is pretty subtle – it’s just a small, rather plain-looking gingerbread man cookie on a plate that the Red M&M is holding.  So the focus is definitely meant to be on the Santa-hat-wearing M&M’s mascot.   Overall, a great bit of festive holiday packaging.

Next up is Mars’ other gingerbread-flavored limited edition for 2013 – Twix Gingerbread! 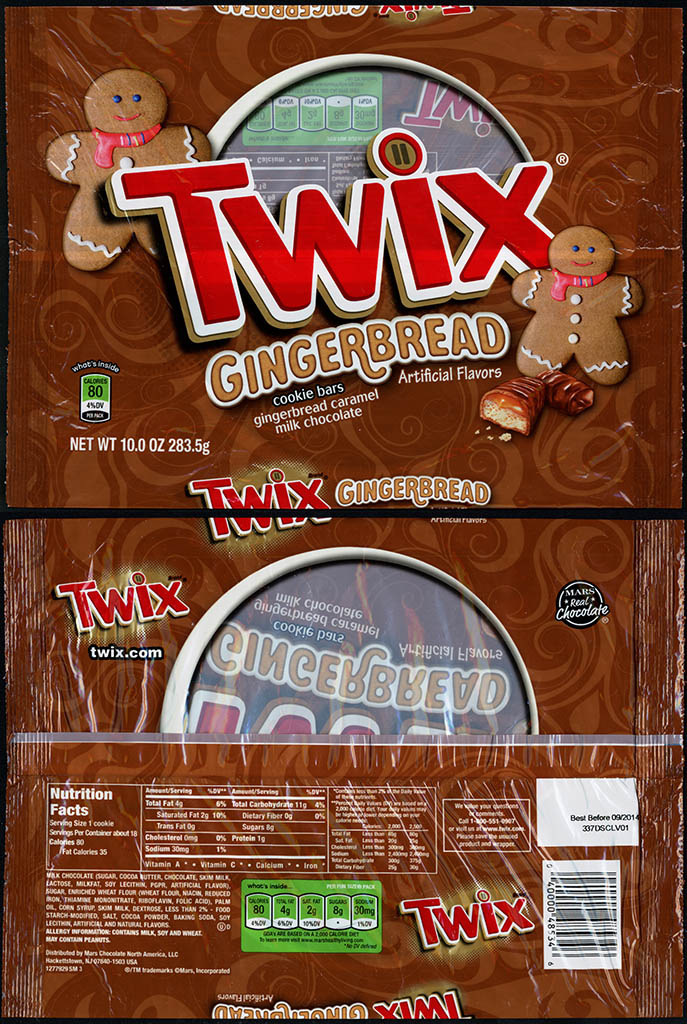 For the Twix Gingerbread release, a more colorful cookie graphic takes on a prominent position for the overall design and provides the focus of the package.   You won’t miss that these are gingerbread flavor.

With the Gingerbread Twix, not only do we have an outer wrapper but also the individual themed foil wrappers for the snack-sized bars inside.  Here’s one: 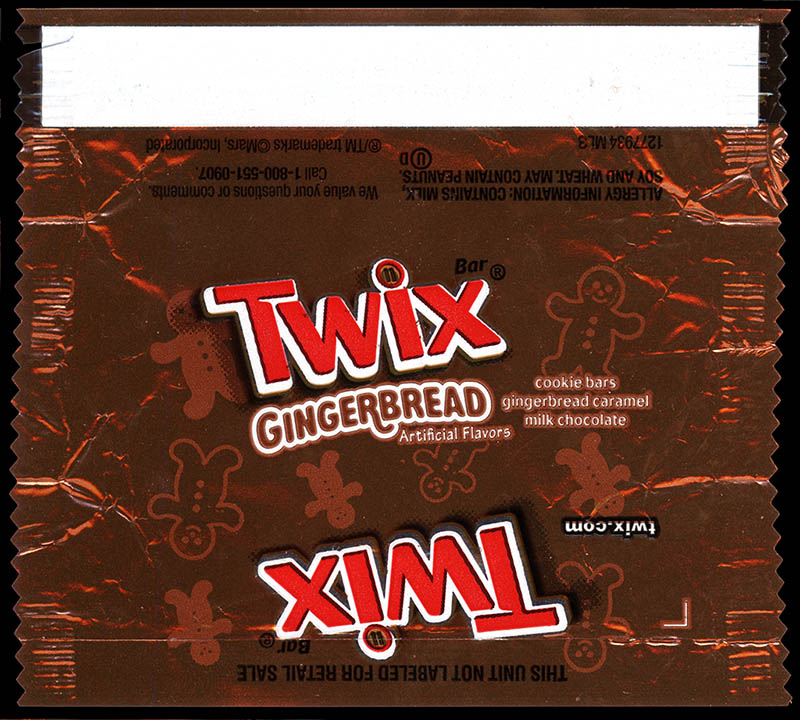 The smaller wrapper necessitates a simpler graphic style, but it’s still quite appealing.  I’d love to see what a full-size bar release of Twix Gingerbread would look like, as I think it could result in a dynamite and colorful limited edition wrapper.

M&M/Mars aren’t the only ones bringing gingerbread flavoring to one of their classic products in 2013.  Just Born’s got Gingerbread-flavored Peeps on shelves this year and after sampling these I gotta say; I really enjoyed the mix of the gingerbread flavoring with the classic sugared marshmallow Peep:

Here’s the empty, flattened package – I think they did a great job with the gingerbread house design for these:

After those three new products, it’s clear that gingerbread as a flavor is as popular as ever — today I even spotted a Wonka-branded giant gingerbread man kit: 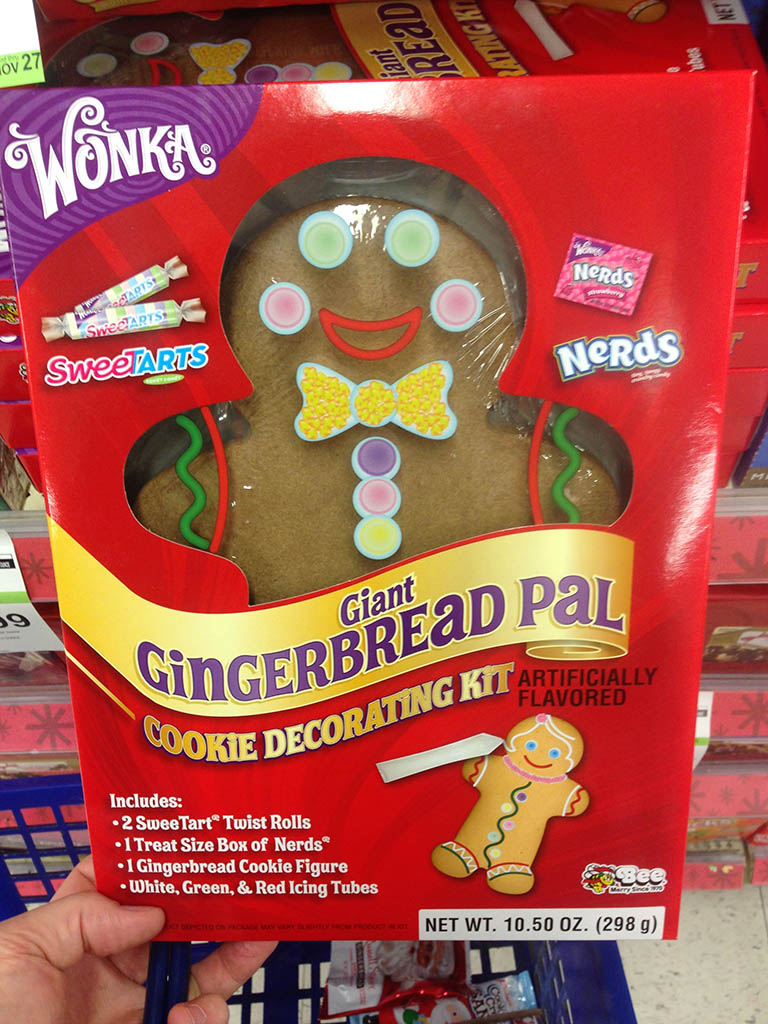 So while 2013 is shaping up to be the season of gingerbread as an additive confectionery flavoring, it’s important to remember that gingerbread men and gingerbread houses have been around for a very very long time.   Even as a flavoring for other classic treats, I started noticing the gingerbread-trend last year when Nabisco introduced their Gingerbread Oreo cookies (which are back for an encore in 2013): 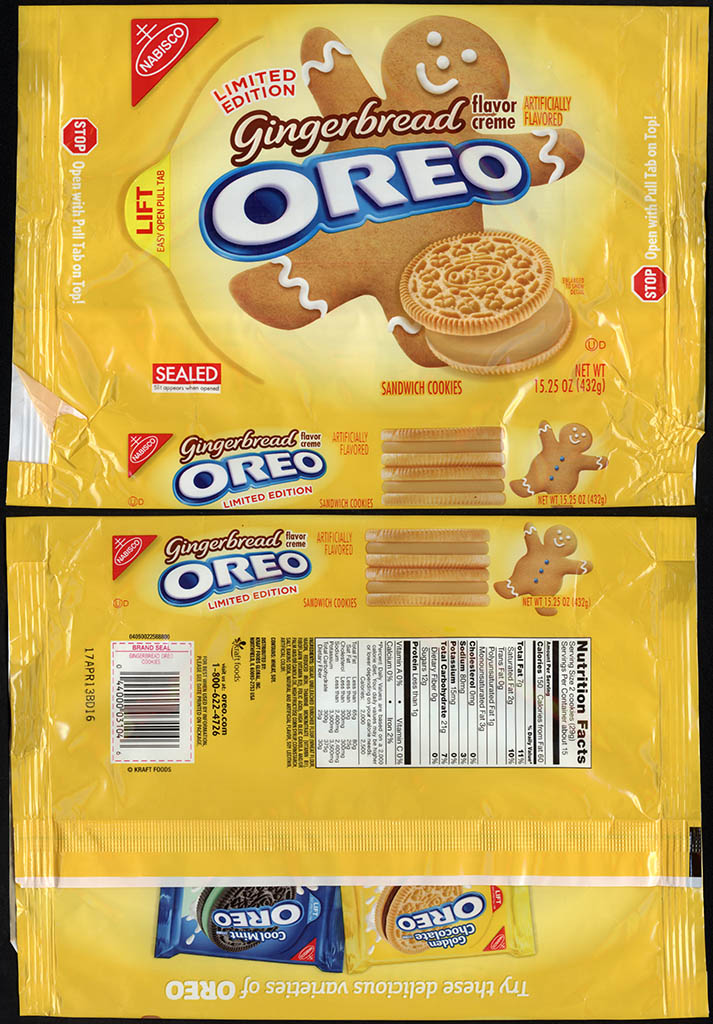 And that’s everything on the year of gingerbread and our first entry in CollectingCandy.com’s 2013 Twelve Days of Christmas.

A New York City based writer, editor and sometimes actor. After spending much of the 1990′s in the comic book business helping tell the stories of Marvel Comics’ X-Men as series editor, he has since split his time between developing his own entertainment properties while still consulting and working on others. Having been described as “the Indiana Jones of lost and forgotten candy”, Jason is one of the country’s premier candy collectors and historians with his discoveries appearing in countless blogs, magazines, newspaper articles, and books. Always happy to share his knowledge and unique perspectives on this colorful part of our popular culture, Jason has consulted with New York’s Museum of Food and Drink and has also been a featured guest on Food Network’s Heavyweights, France’s M6 Capital, and New York’s TheActionRoom.com. My Google Profile+
View all posts by Jason Liebig →
This entry was posted in Chocolate, Christmas, cookies, Holiday, M&M's, Mars, Uncategorized, Wonka and tagged candy collecting, candy collection, candy collector, candy wrapper collection, candy wrapper collector, Christmas, collectible, collecting candy, confectionery, confections, gingerbread, holiday, Just Born, M&M's, packaging, Peeps, sweets, vintage candy wrapper, wrapper. Bookmark the permalink.

1 Response to Twelve Days of Christmas: Gingerbread for 2013!