Cellophane – as a candy fan, it’s easy to love.  As a candy packaging collector – it presents  some challenges you have probably never considered.

Cellophane was first conceived by Swiss chemist, Jacques E. Brandenberger in France in 1900, and put into manufacture in 1912.  One of the first companies to embrace it was the Whitman candy company, initially for their Whitman’s Sampler.  Beyond just an early adopter of the new packaging material, Whitman remained the largest US importer of cellophane until 1924. 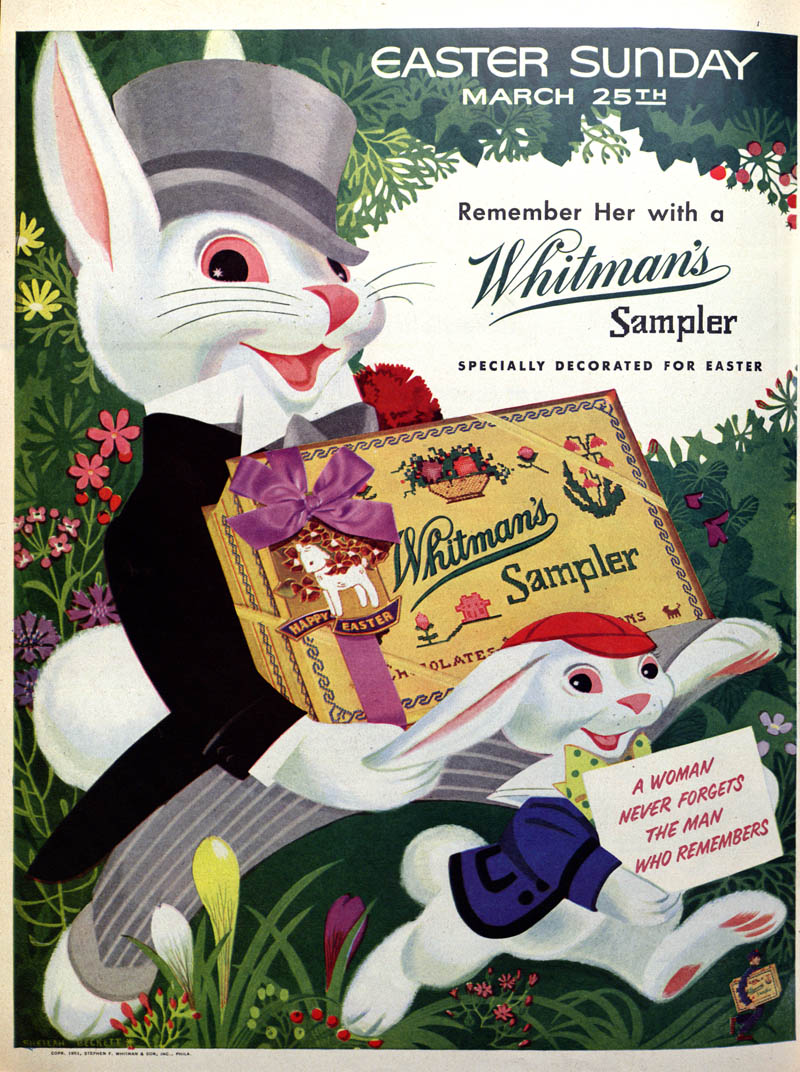 While cellophane would come to be used across a wide variety of food and other consumer products, it has always been closely linked to the world of candy.  It’s easy to understand why.

Cellophane is not only protective but its clear glossy composition allows colorful candies to be seen and showcased. 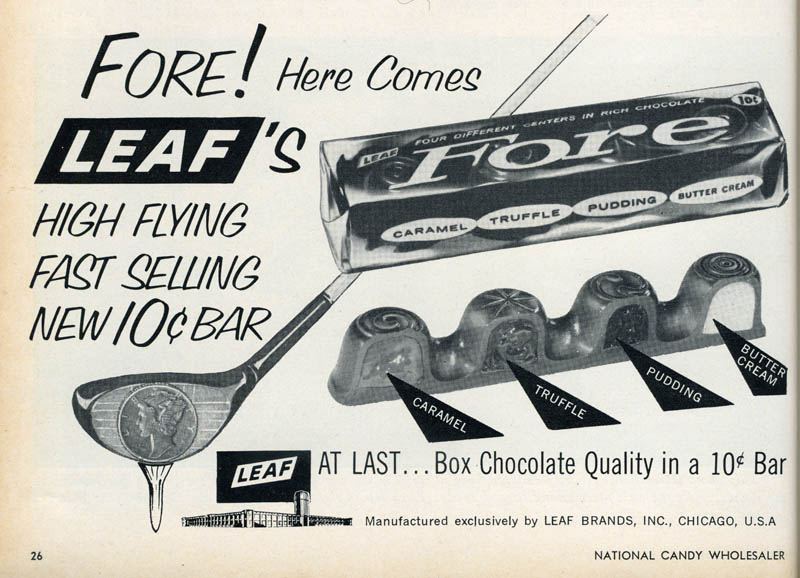 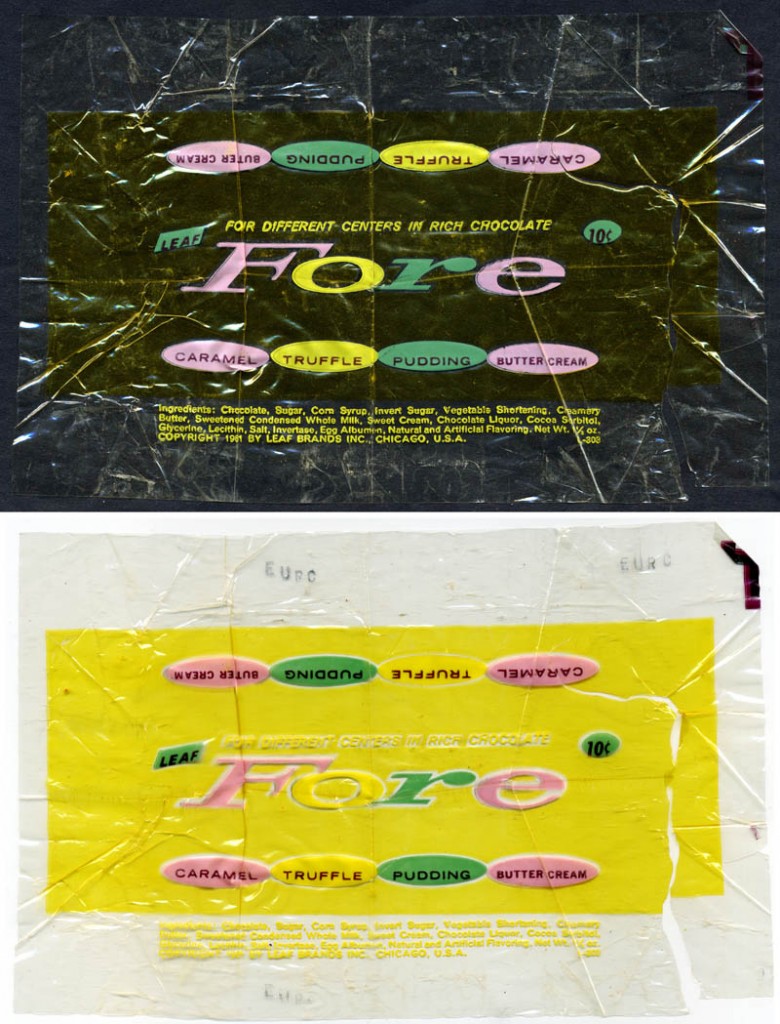 Cellophane candy wrappers, or cello wrappers, have been around for a very long time, and are still in use today.   It’s hard to find another kind of packaging used on gum-balls.  Cello is it: 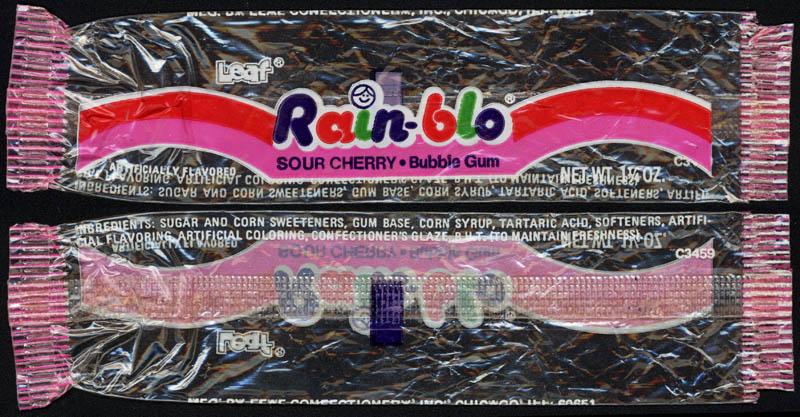 While a proven and reliable material for the candy industry, cellophane packaging presents unique problems for the collector.

Chuckles are a classic candy brand and showcase how important the candy itself becomes to complete the look of the packaging: 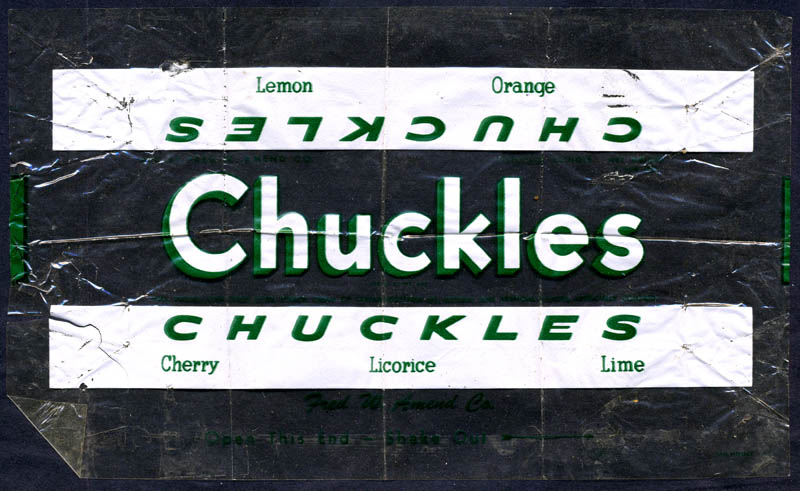 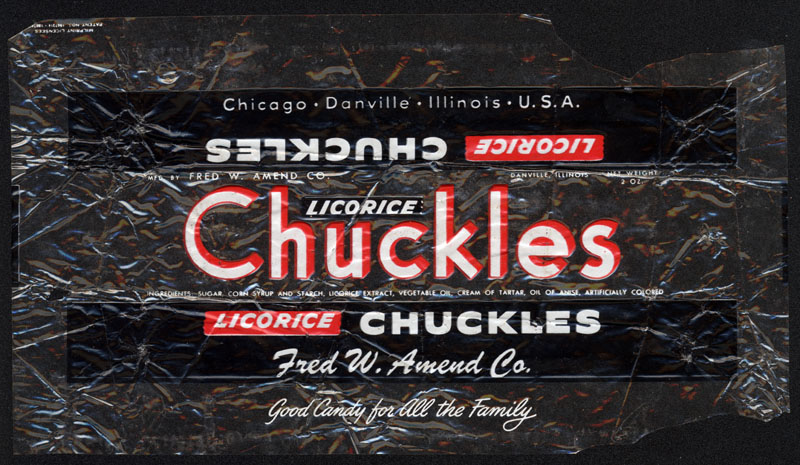 While the Chuckles logos are still clear, a candy-less wrapper like this will never convey what the original full package had intended. 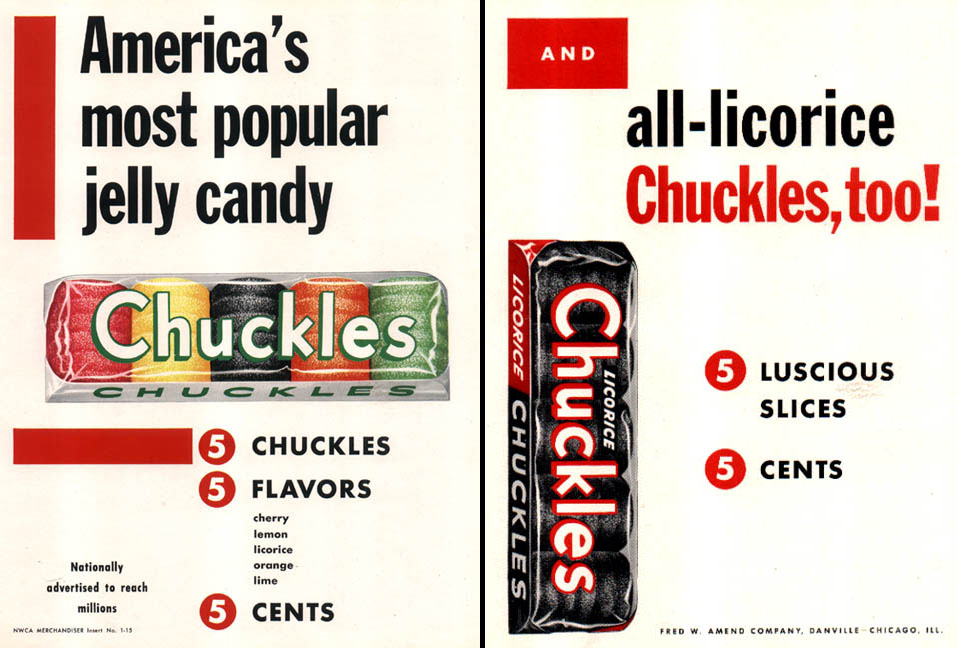 The other major issue with cellophane is wear-and-tear over time and damage from initial opening.

More than any other wrapper type, cello wrappers seem to only open through a destructive series of tears.   It’s tough to open a cello wrapper without causing it to rip, and once that rip starts, it can’t be stopped.

When you find an older cello package – it’s not unusual to find all manner of deformations and destruction.

With candy packaging, even wrappers like this can be worth saving and documenting as they can reveal an unknown piece of a brand’s history. 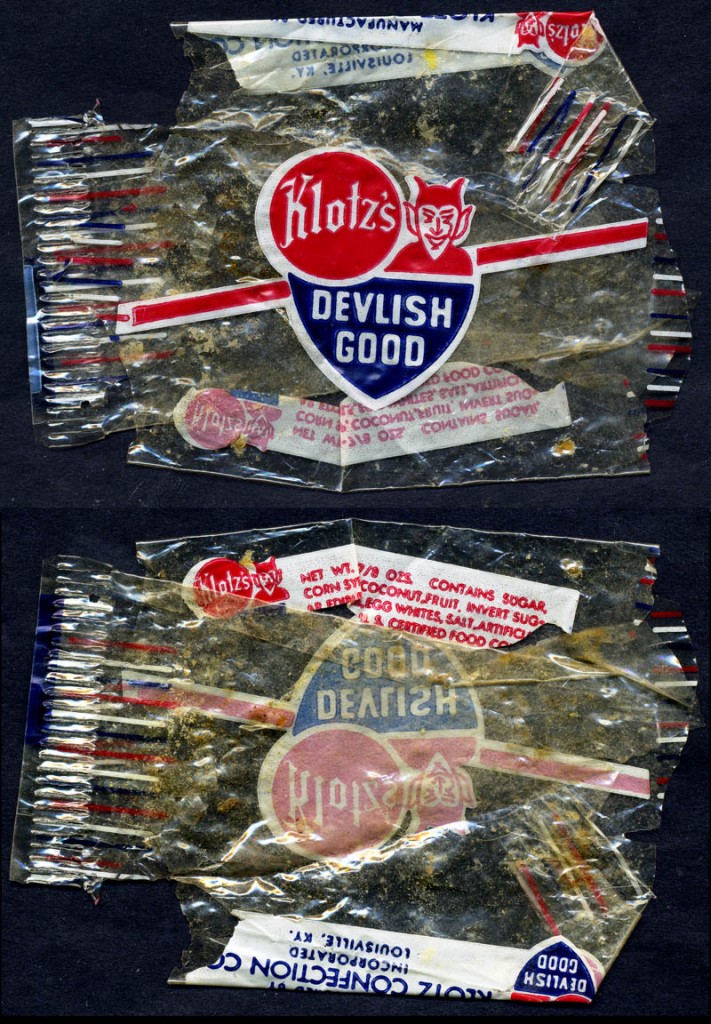 As you can see, wrinkles, rips and partial wrappers are commonplace when cellophane is involved.

There’s also the issue of brittleness.   Unlike a paper or wax wrapper – cello wrappers can become incredibly stiff and brittle over time.  If a wrapper is folded before it is stored, or bunched up – it can be difficult to bring back into shape.  The act of unfolding a cello wrapper in this condition can cause it to crack and break apart.

In spite of breakage and damage, even rough-looking cello wrappers can be interesting and appealing.

When they’ve been nicely preserved, they can be especially fun.

Here’s a wrapper printed on colored cellophane that many of you will probably find familiar: 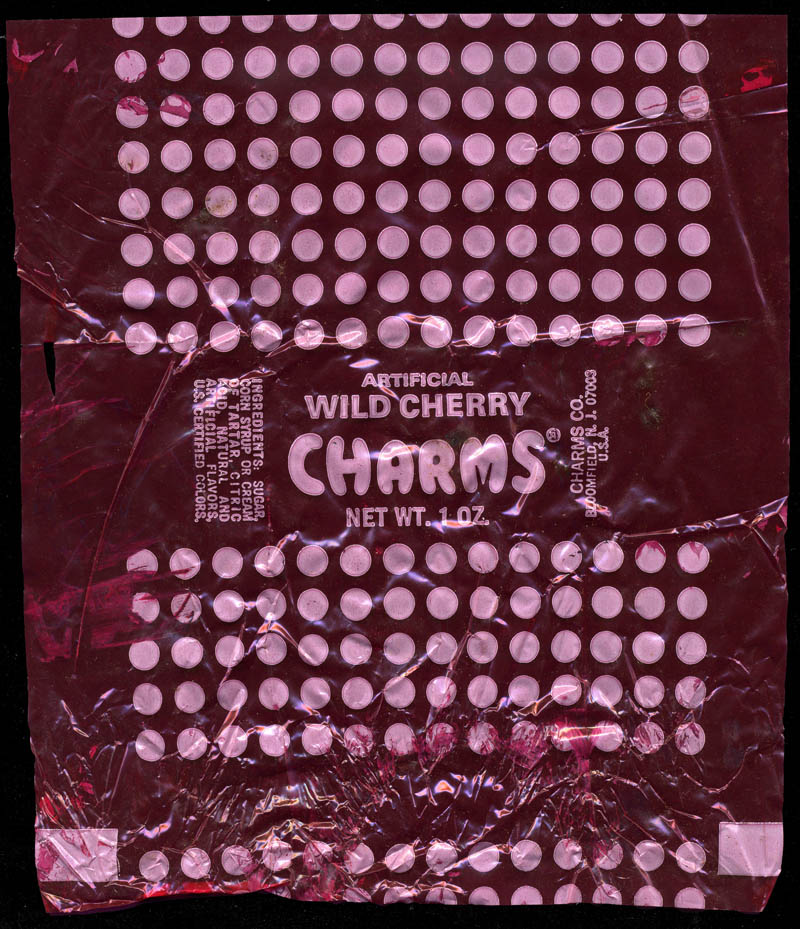 Cello wrappers provide challenges for a collector like myself, but they’re worth the effort.

I’m going to wrap up with a pair of examples of the same Hershey Miniatures Assorted cello wrapper. 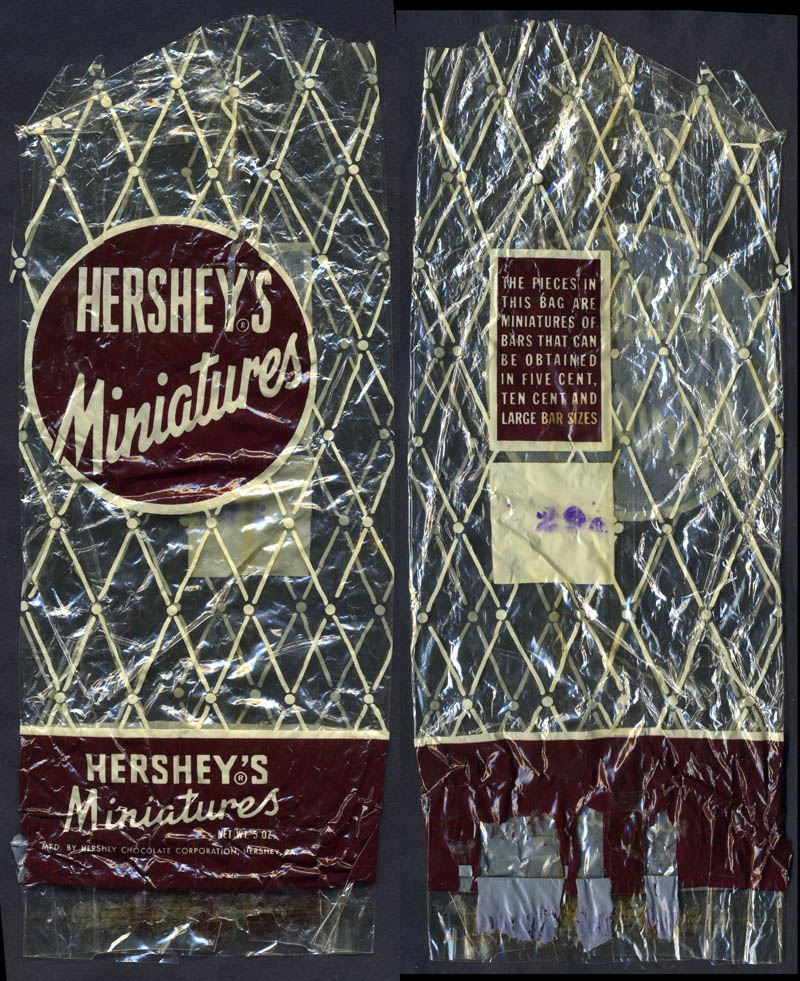 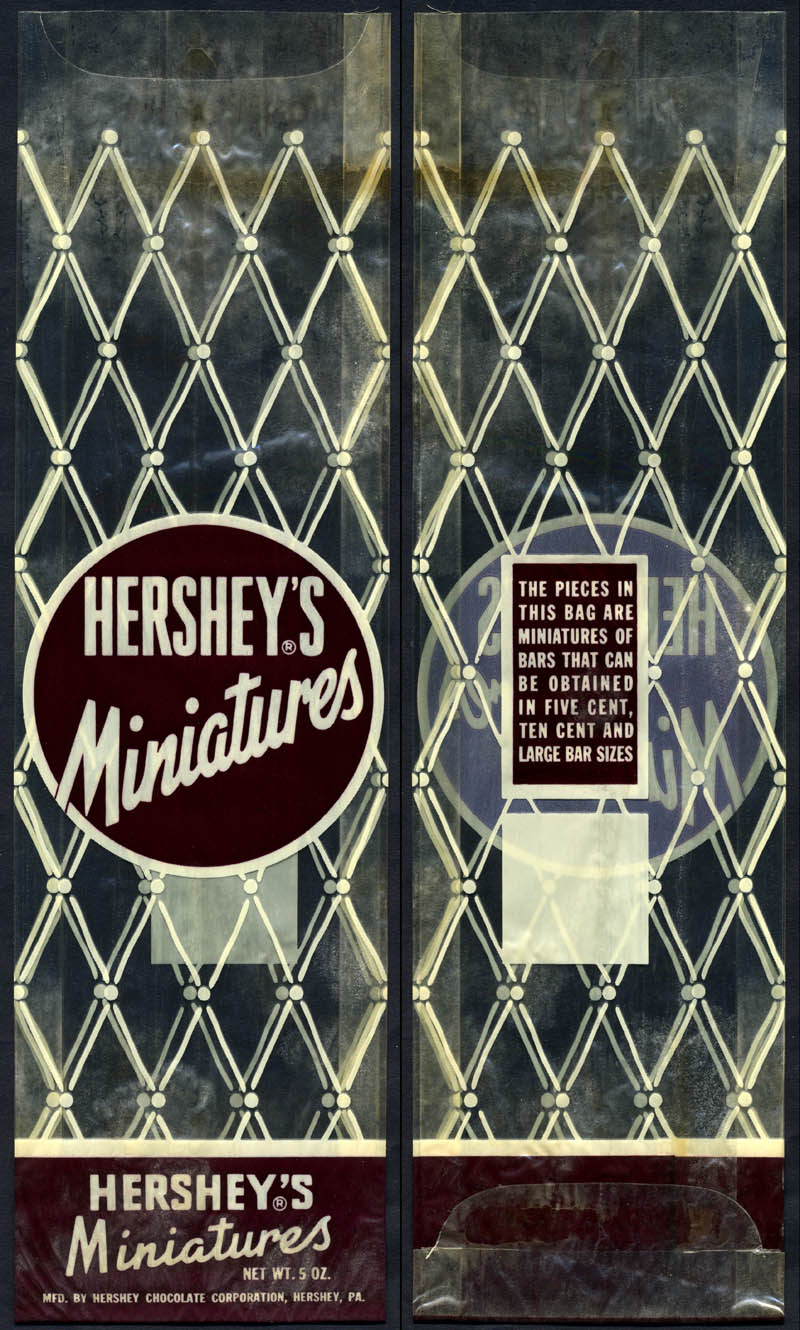 Showing these two together presents quite a contrast.

I found that first damaged and worn Hershey Miniatures bag in a collection saved from the 1950’s.  It’s a great piece, but the cellophane shows its age.  It also reveals the damage incurred when it was first opened.

The second example is one I found as part of a packaging company sales kit.  Cellucraft, a company that produced cellophane and plastic packaging, included this piece as part of a folder of examples to show to potential clients.

Interestingly, the file copy example retains a flexibility the wrinkled one does not.  I’m not sure exactly why that is.

One final bit of cellophane-based fun.  A wrapper for another childhood favorite of mine, and one that is still around – the oddly-named Chick-o-Stick:

A New York City based writer, editor and sometimes actor. After spending much of the 1990′s in the comic book business helping tell the stories of Marvel Comics’ X-Men as series editor, he has since split his time between developing his own entertainment properties while still consulting and working on others. Having been described as “the Indiana Jones of lost and forgotten candy”, Jason is one of the country’s premier candy collectors and historians with his discoveries appearing in countless blogs, magazines, newspaper articles, and books. Always happy to share his knowledge and unique perspectives on this colorful part of our popular culture, Jason has consulted with New York’s Museum of Food and Drink and has also been a featured guest on Food Network’s Heavyweights, France’s M6 Capital, and New York’s TheActionRoom.com. My Google Profile+
View all posts by Jason Liebig →
This entry was posted in 1970's, Uncategorized. Bookmark the permalink.

3 Responses to Cellophane Struggles – Challenges of the See-Thru Stuff