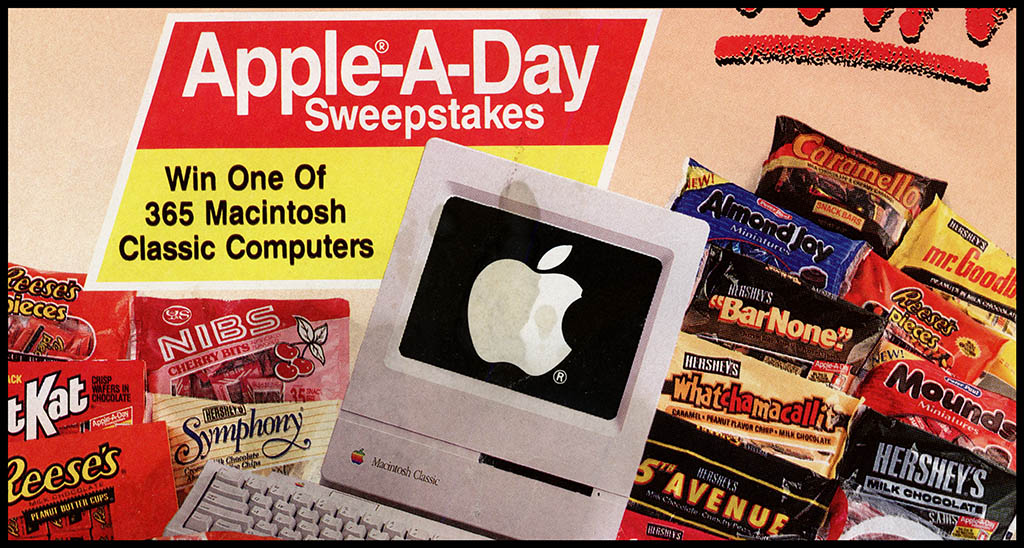 Back in 1992, Hershey teamed up with Apple Computer to give away 365 Mac Classic computers to lucky consumers.  Today I’m featuring a marketing circular released as part of that Apple-A-Day Sweepstakes.

It’s always fun to find evidence of promotions that tie together iconic brands as is seen with the following Apple-A-Day circular.  Check it out: 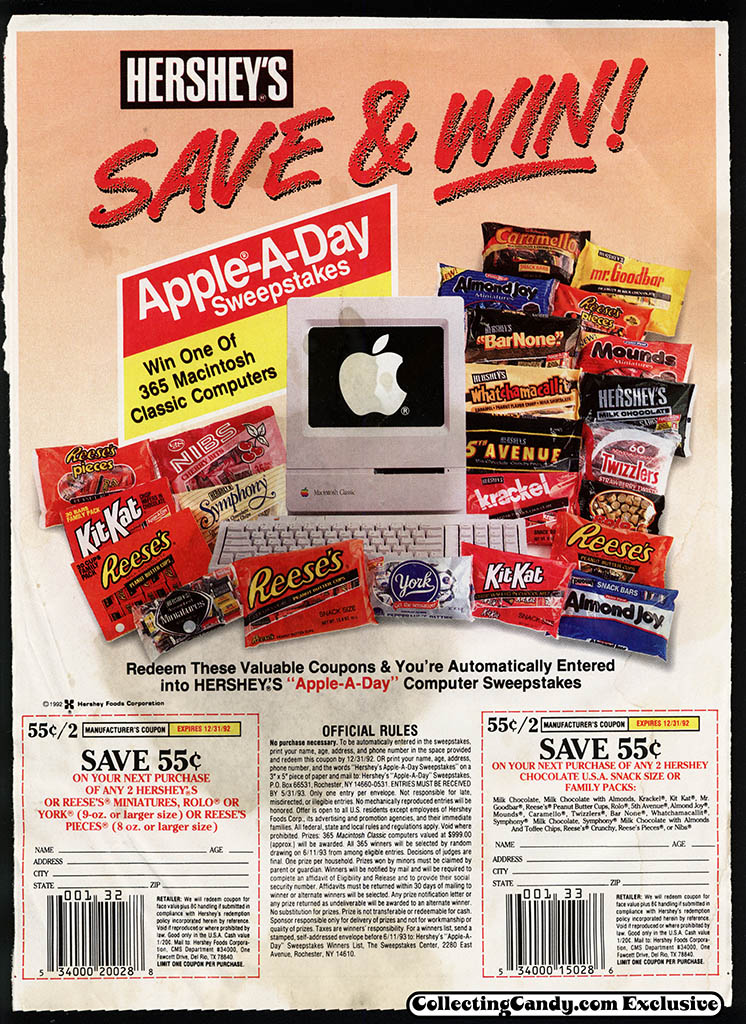 Though you see it quite a bit today, it’s neat to realize that Apple products were just as attractive prize giveaways two decades ago.

Here’s a close-up of the array of multi-packs represented in the ad – I love seeing the happy Mac flanked by all that great candy: 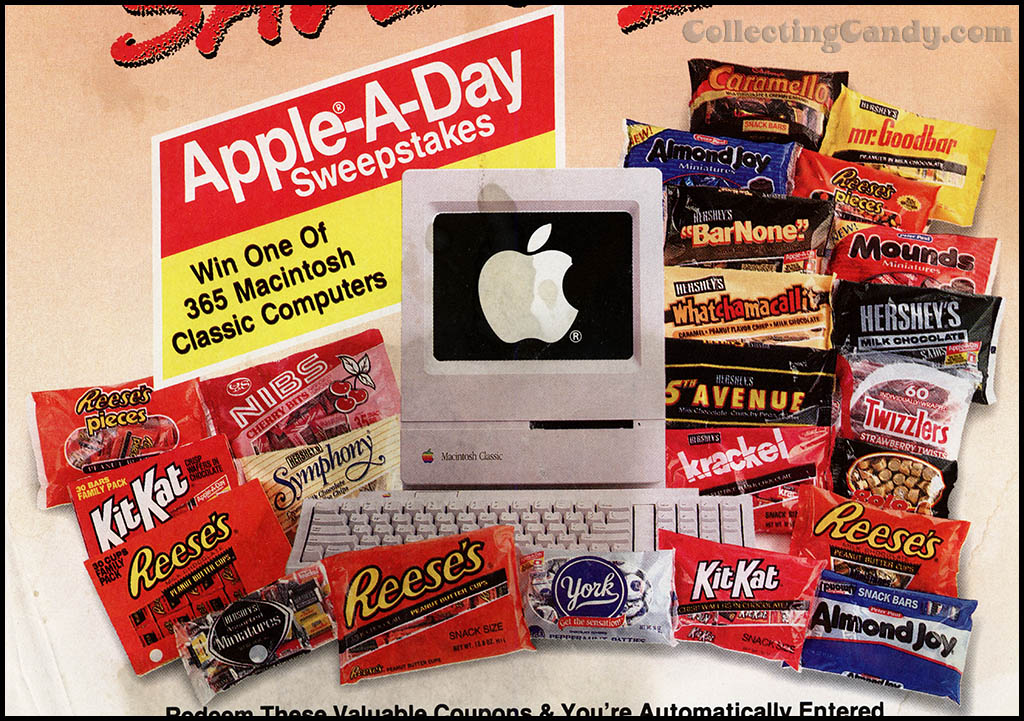 Though many of those packages feature standard designs, at least a couple of them sport graphics representing the Apple-A-Day promotion itself.  It’s tough to make out, but there’s an Apple-A-Day graphic right there on the Bar None and Hershey’s Milk Chocolate packages: 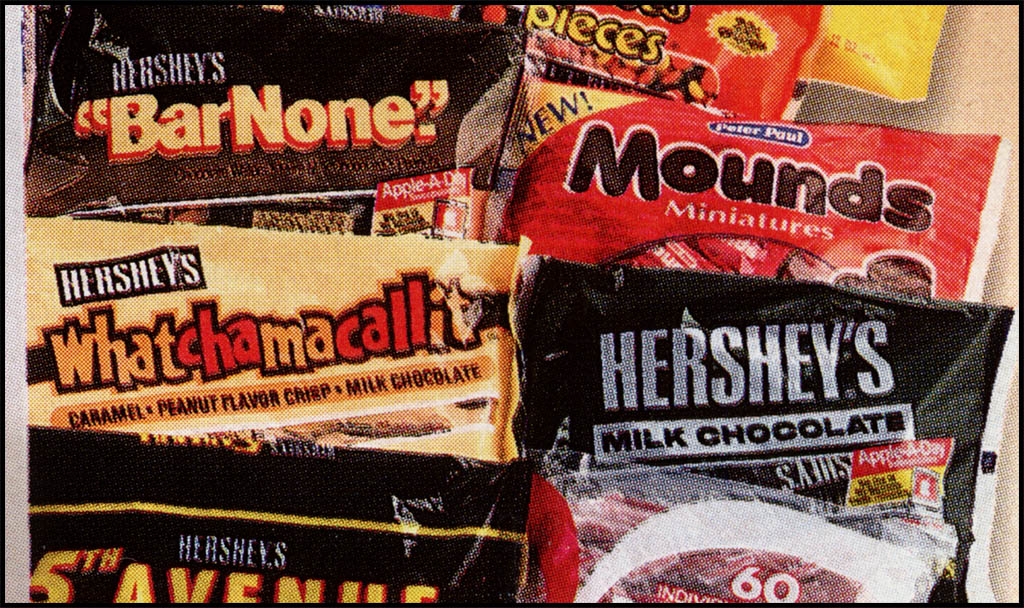 While I don’t currently have any, I’d love to find some of the actual Apple-A-Day Sweepstakes packaging to add to my collection, because I really do dig cross promotions like this.

During my research, I found that this promotion was successful enough to warrant a follow-up just two years later in 1994.  It received the effective title of Hershey’s Apple-A-Day II Sweepstakes.  I only know about the follow-up because another collector has this piece in their collection:

So there were at least a pair of Apple Mac related candy promotions in the 1990’s, but it wouldn’t surprise me at all if there were others.  Apple products do make awfully pretty prizes!

Anyone out there remember this promotion?  If you do, let us know.

A New York City based writer, editor and sometimes actor. After spending much of the 1990′s in the comic book business helping tell the stories of Marvel Comics’ X-Men as series editor, he has since split his time between developing his own entertainment properties while still consulting and working on others. Having been described as “the Indiana Jones of lost and forgotten candy”, Jason is one of the country’s premier candy collectors and historians with his discoveries appearing in countless blogs, magazines, newspaper articles, and books. Always happy to share his knowledge and unique perspectives on this colorful part of our popular culture, Jason has consulted with New York’s Museum of Food and Drink and has also been a featured guest on Food Network’s Heavyweights, France’s M6 Capital, and New York’s TheActionRoom.com. My Google Profile+
View all posts by Jason Liebig →
This entry was posted in 1990's, Chocolate, Hershey and tagged 1990's candy, Apple Computer, Apple Mac, Apple Macintosh, candy collecting, candy collection, candy collector, candy wrapper collection, candy wrapper collector, collectible, collecting candy, confectionery, confections, Mac, Macintosh, packaging, sweets, vintage candy wrapper, wrapper. Bookmark the permalink.