New for Halloween this year, Wrigley has released a cool trick-or-treat-friendly big bag of little boxes of Hubba Bubba bubble gum.  So today we’re going to take a look at that as well as a few fun earlier Hubba Bubba Halloween items.

I love finding monster-themed Halloween packaging for existing brands, so when I spotted this big bag of Hubba Bubba monster boxes, I immediately bought it and excitedly brought it home.   Here’s a look at the large multi-bag package after I emptied and flattened it: 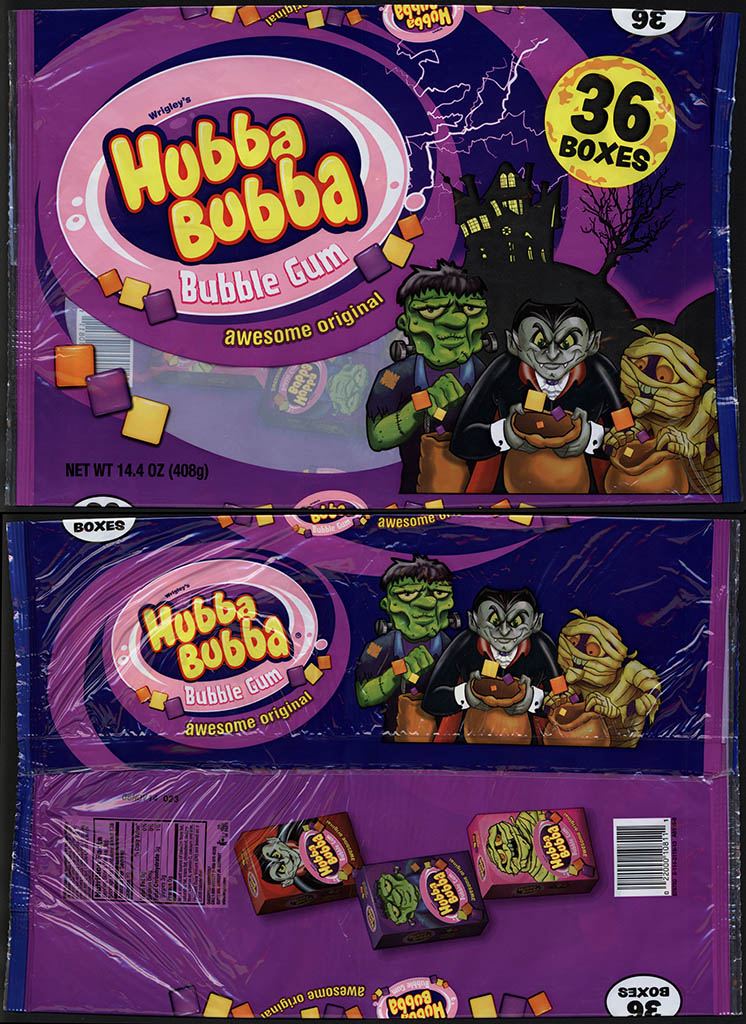 Unlike the soft-chunk style of gum that Hubba Bubba is known for, these small Halloween boxes contained a candy-coated style of gum similar to Chiclets… or for the vintage-minded, similar to the gum pieces found in Swell’s Earthshaker.

Here are scans of the three different boxes found in the package: 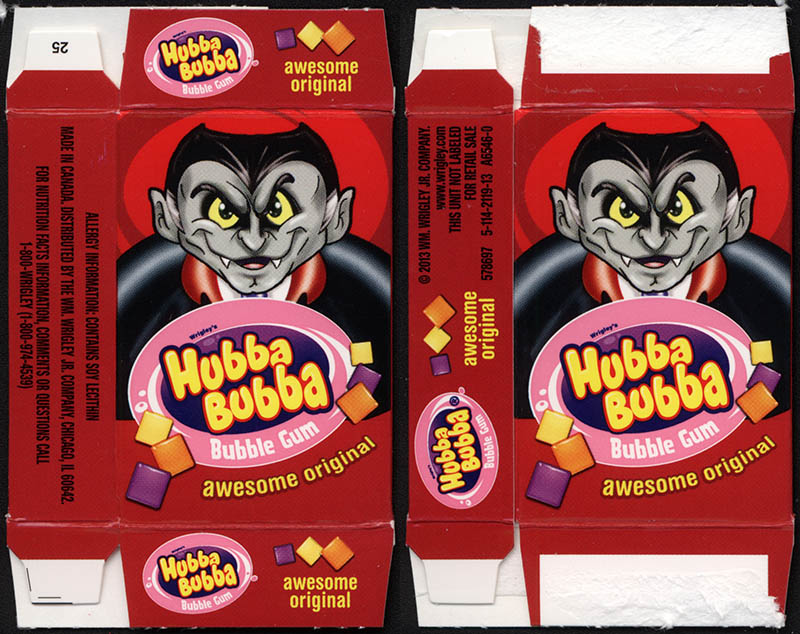 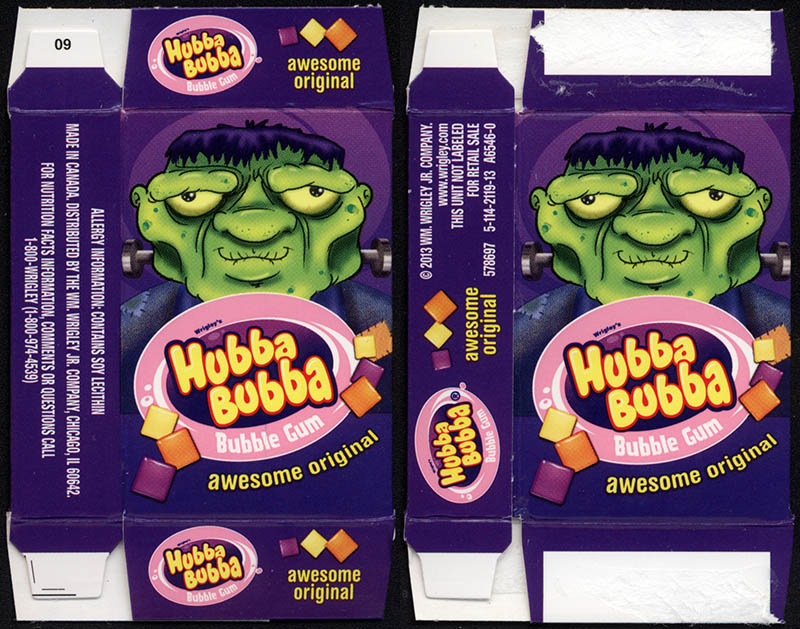 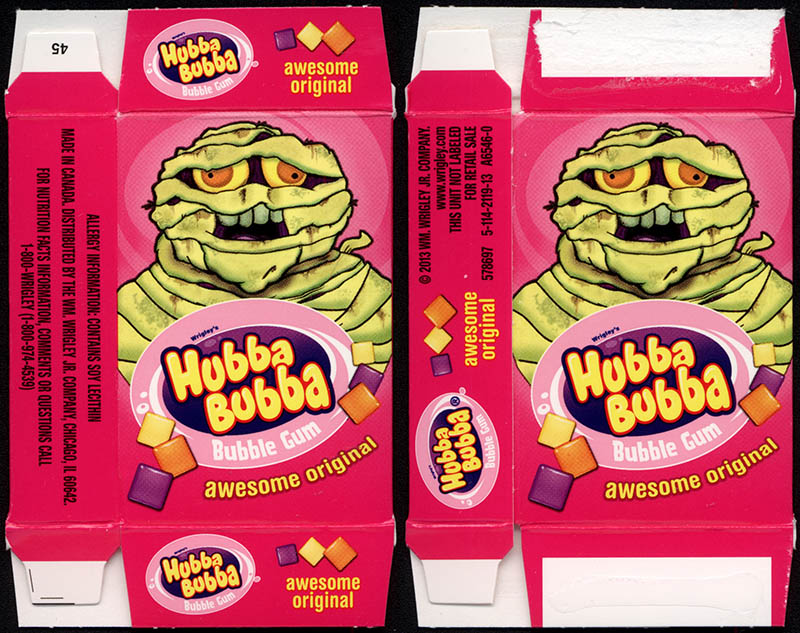 While this package format of Hubba Bubba Halloween gum was new for 2013, the illustrations featured have been in use for at least a few years previously – on Hubba Bubba’s Halloween Bubble Tape product dispensers.  Here’s a set of three from 2012:

And since I was sharing my Halloween Bubble Tape containers from last year, I decided to pull out this vintage one in my collection from 1998:

Beyond the Bubble Tape, I found another Hubba Bubba Halloween item in my archives called Twist ‘n Pour, which like this years’ boxed offering also contained small pieces of candy-coated gum.  These were from 2006:

And that led me to notice that Wrigley (now merged with the Mars company – and now in charge of the Skittles brand) has reused those containers for Halloween this year.   Instead of Hubba Bubba, this year’s Twist ‘n Pour dispensers contain Skittles!  Here are 2006’s Hubba Bubba containers pictured next to 2013’s Skittles editions:

I think that the lesson here is to never let a perfectly good candy container go to waste!  And that’s everything for today’s coverage of Halloween Hubba Bubba, in all it’s fun forms.

A New York City based writer, editor and sometimes actor. After spending much of the 1990′s in the comic book business helping tell the stories of Marvel Comics’ X-Men as series editor, he has since split his time between developing his own entertainment properties while still consulting and working on others. Having been described as “the Indiana Jones of lost and forgotten candy”, Jason is one of the country’s premier candy collectors and historians with his discoveries appearing in countless blogs, magazines, newspaper articles, and books. Always happy to share his knowledge and unique perspectives on this colorful part of our popular culture, Jason has consulted with New York’s Museum of Food and Drink and has also been a featured guest on Food Network’s Heavyweights, France’s M6 Capital, and New York’s TheActionRoom.com. My Google Profile+
View all posts by Jason Liebig →
This entry was posted in 1990's, Boxed, Bubble Gum, CountdownToHalloween, Gum, Halloween, Holiday, Novelty and tagged candy collecting, candy collection, candy collector, candy wrapper collection, candy wrapper collector, collectible, collecting candy, confectionery, confections, Halloween candy, Halloween gum, Hubba Bubba, packaging, soft-chunk, sweets, vintage candy wrapper, wrapper. Bookmark the permalink.