Today we’re going back to the 1980’s and taking a look at the contents of a Halloween candy trade ad from the Howard B. Stark company.  We’ll also be catching a glimpse of some seriously spooky decades-old unopened Stark candy!

Intended to appeal to candy buyers and distributors, this trade ad arrived by early Summer and focused on a handful of Stark’s Halloween seasonal products available that year. 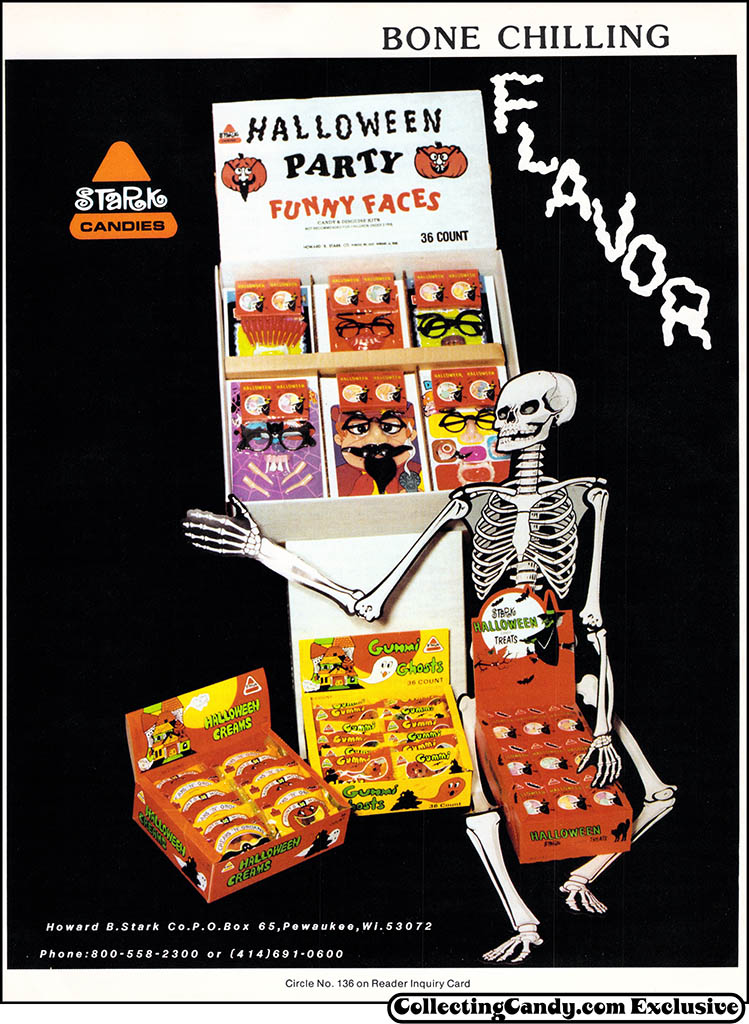 Even though it’s a little plain, this Stark ad is a fun piece that includes a classic Halloween decoration – the cardboard poseable skeleton.  I also really dig this era of Stark company logo with the swirly typeface.

The main focus of the ad is the “Funny Faces” 36-count store display.  These Funny Faces packs would appear to be typical dime-store style costume bits bundled with boxed Stark candy.  Here’s a closer look: 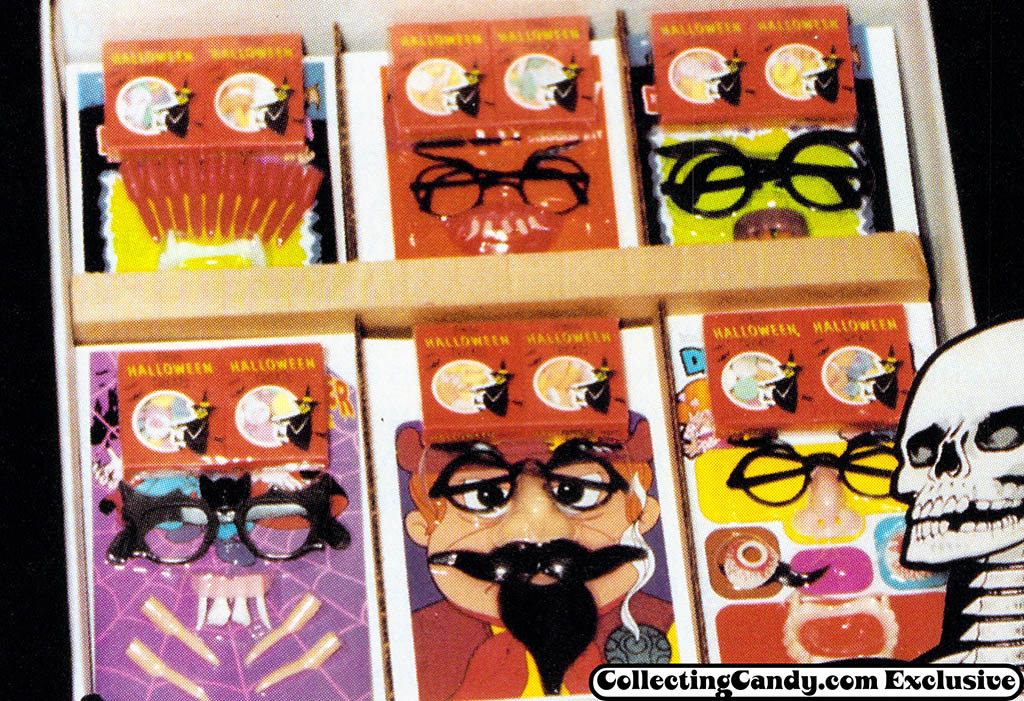 Beyond the Funny Faces bundle packs, the ad also showcases a trio of Stark’s Halloween products: 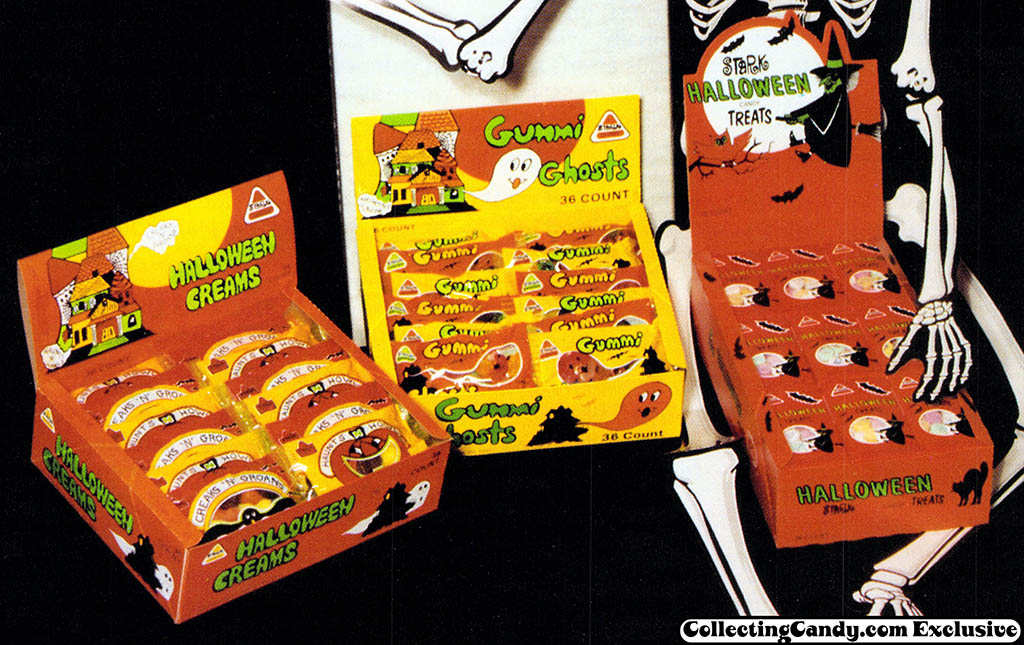 I’d love to track down either of those Halloween Creams or the Gummi Ghosts packages – both of them are pretty awesome.  [My pal Darlene Lacey over at CandyWrapperMuseum has an earlier version of Gummi Ghosts package in her collection – check it out.]

I’m fortunate that I do have one of the Stark Halloween Treats boxes shown in this ad, and my example still has the candy in it! 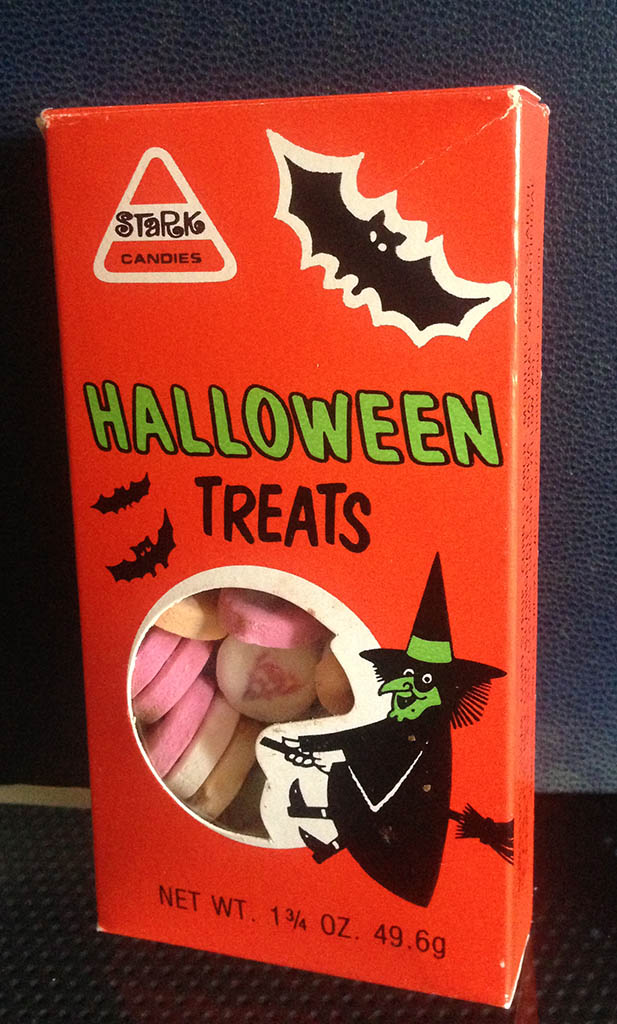 While they might be neat to look at, I don’t really like keeping boxes around with the original candy still in them, as the decomposing zombie candy can eventually damage the surrounding package.   So I decided to empty this one out – allowing me to get a nice archival scan of the box: 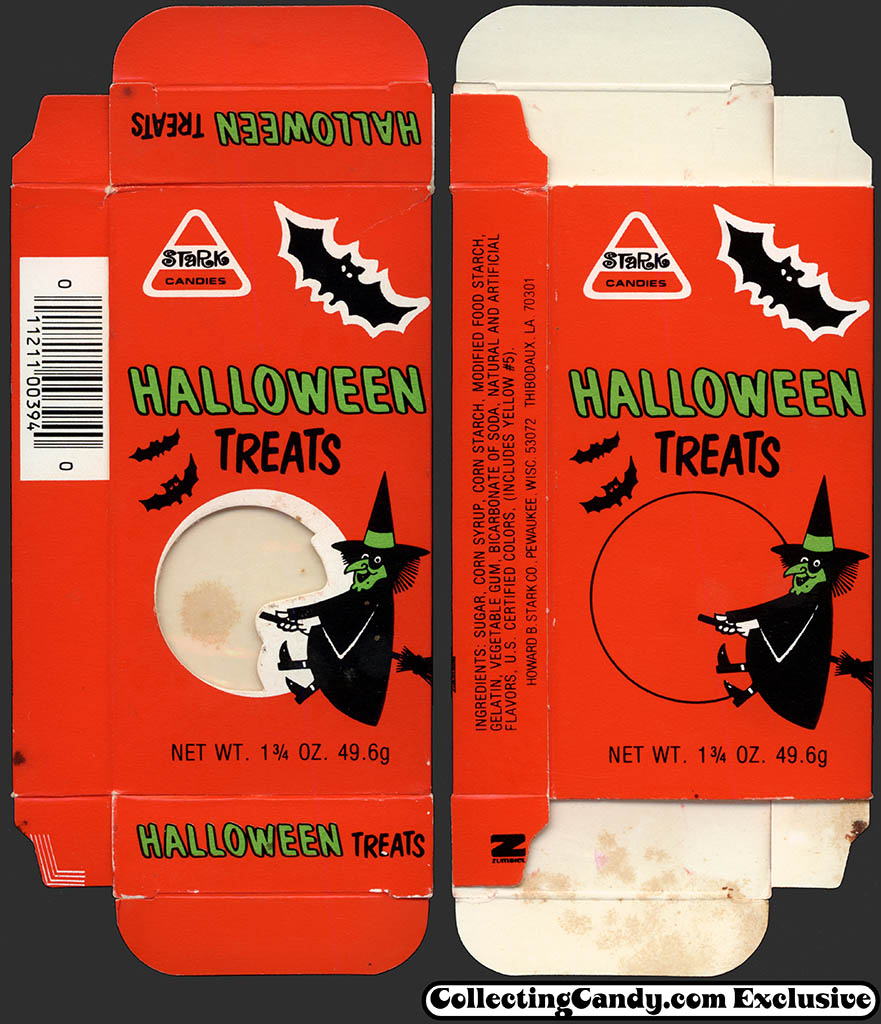 You can see by that scan that the candy had already begun to stain the box.  So out they came and all of the contents went into the trash, but not before I snapped a couple photos of the spooky ancient candy pieces.  [Note: These were simple embossed candies similar to Conversation Hearts]:

Yes, some of these candies almost look like they have burn marks.  But as far as I can tell, they are NOT burns (not really sure what they are – some kind of candy chemical decomposition perhaps?)  Here’s another look:

And that’s the conclusion of today’s post on Stark’s Bone-Chilling Halloween Treats from 1985.  See you next time!

A New York City based writer, editor and sometimes actor. After spending much of the 1990′s in the comic book business helping tell the stories of Marvel Comics’ X-Men as series editor, he has since split his time between developing his own entertainment properties while still consulting and working on others. Having been described as “the Indiana Jones of lost and forgotten candy”, Jason is one of the country’s premier candy collectors and historians with his discoveries appearing in countless blogs, magazines, newspaper articles, and books. Always happy to share his knowledge and unique perspectives on this colorful part of our popular culture, Jason has consulted with New York’s Museum of Food and Drink and has also been a featured guest on Food Network’s Heavyweights, France’s M6 Capital, and New York’s TheActionRoom.com. My Google Profile+
View all posts by Jason Liebig →
This entry was posted in 1980's, Boxed, CountdownToHalloween, Halloween, Holiday and tagged 1980's, 1980's Halloween, 80's, 80's Halloween, candy collecting, candy collection, candy collector, candy wrapper collection, candy wrapper collector, collectible, collecting candy, confectionery, confections, Halloween, Halloween candy, Necco, packaging, Stark, sweets, vintage candy wrapper, wrapper. Bookmark the permalink.