It might be surprising to learn that, outside of the packaging itself, one of the best places to learn about historical confectionery products and marketing is through the promotional circulars published in weekend newspapers.  Today, I’m going to take a look at a handful of Halloween candy circulars from the 1980’s and early 1990’s.

Each of the seven circulars I have to show off today contains a coupon, and quite a few of them include a witch as well!

This first might be my favorite of the bunch as it presents a lovely range of large multi-bag snack-size packages: 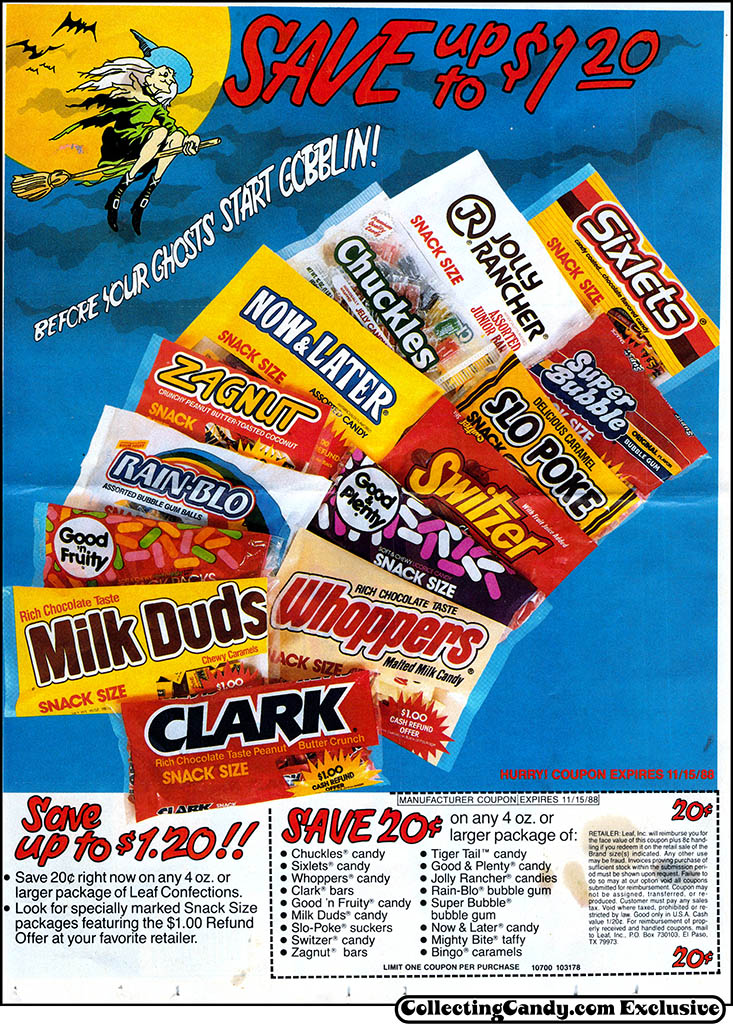 That circular is as interesting for the items that are pictured as it is for the ones only listed (but not pictured) on the coupon:  Bingo Caramels and Mighty Bite Taffy are two 1980’s Leaf packages I’d love to have images of, and while I don’t, at least I now know they were being sold in 1987.

Next up is a circular that presents a classic Hershey’s candy assortment as well as a classic Halloween scene:

That woman is giving out full-size Hershey bars – I’ll bet her house was popular!

M&M/Mars was also in the mix with a pair of Halloween kids on a circular in 1987 – though this one took the illustrated route:

That same year M&M/Mars teamed-up with General Foods for this odd bit of product tie-in with M&M’s and Maxwell House Master Blend coffee: 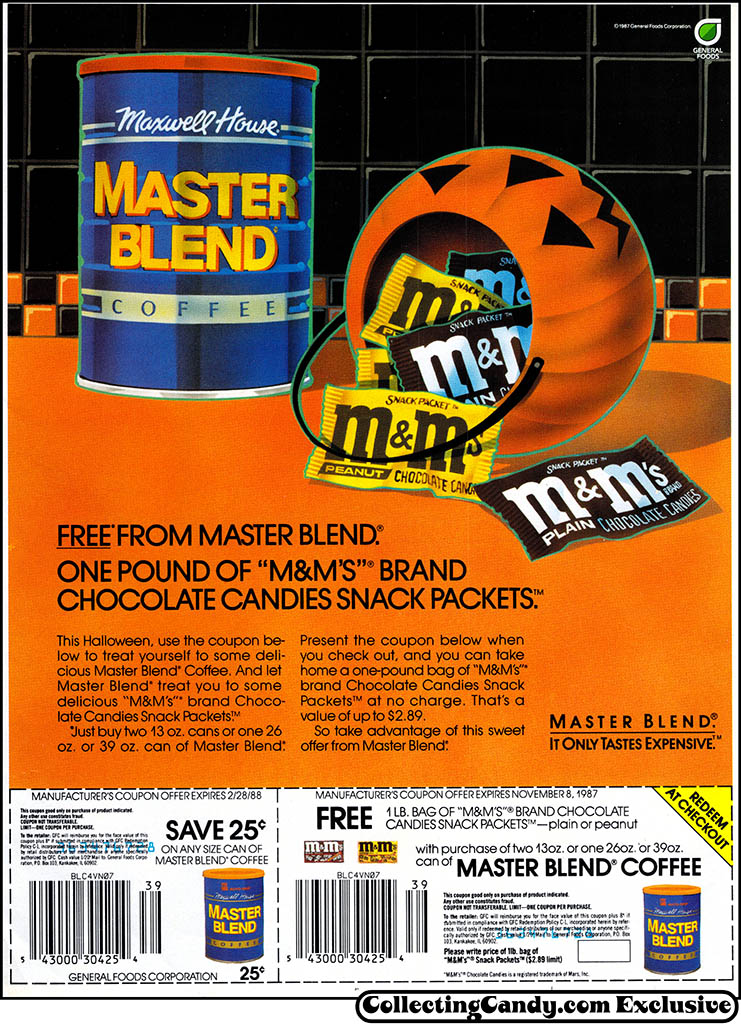 I quite like the illustration on this 1989 circular for Peter Paul’s Almond Joy, Mounds and York Peppermint Patties – as the girl appears to be dressed in a kind of Pilgrim-as-Witch costume: 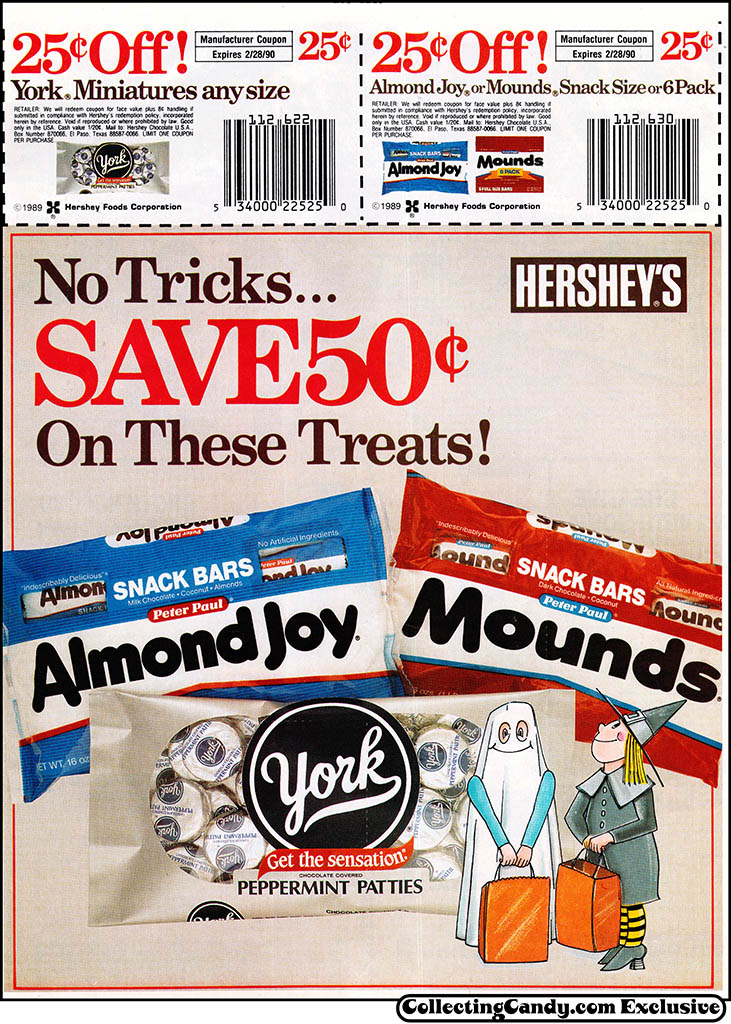 Next up is a simple little half-page circular ad for a Halloween mainstay, Kraft Caramels – as well as some other Kraft treats:

I’ve never come across a package for Kraft Nutter Bits and beyond that I don’t think I’ve ever encountered any of the 1987 Kraft packaging seen in that circular at all.

Last up today is a simple circular from the early 1990’s that frames Cadbury’s Caramello with Halloween graphics for its 25-cent off promotion: 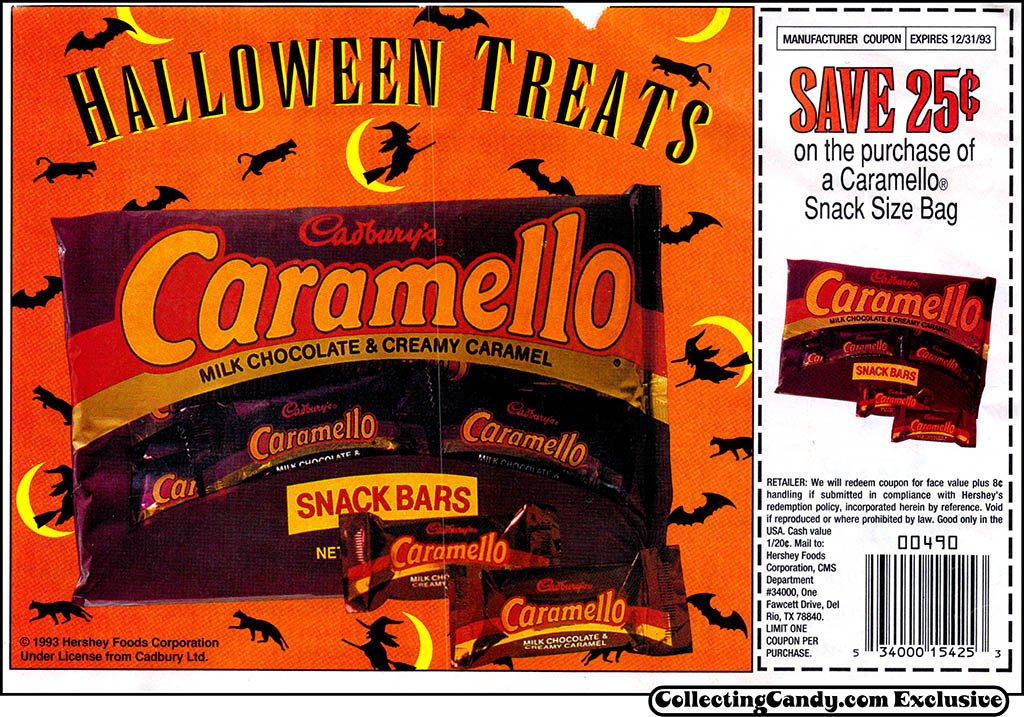 Vintage circulars can be neat to see but beyond that, they can also help clearly define what candy packaging from a specific period looked like.  The ones I’ve managed to pick up over the years have been a big help in figuring out the timelines of certain products.

And that’s everything for today’s post on vintage Halloween candy newspaper circulars.   I hope you enjoyed them and I’ll see you next time!

A New York City based writer, editor and sometimes actor. After spending much of the 1990′s in the comic book business helping tell the stories of Marvel Comics’ X-Men as series editor, he has since split his time between developing his own entertainment properties while still consulting and working on others. Having been described as “the Indiana Jones of lost and forgotten candy”, Jason is one of the country’s premier candy collectors and historians with his discoveries appearing in countless blogs, magazines, newspaper articles, and books. Always happy to share his knowledge and unique perspectives on this colorful part of our popular culture, Jason has consulted with New York’s Museum of Food and Drink and has also been a featured guest on Food Network’s Heavyweights, France’s M6 Capital, and New York’s TheActionRoom.com. My Google Profile+
View all posts by Jason Liebig →
This entry was posted in 1980's, Bubble Gum, Cadbury, Chocolate, CountdownToHalloween, Gum, Halloween, Hershey, M&M's, Mars and tagged 1980's candy, 80's candy, candy collecting, candy collection, candy collector, candy wrapper collection, candy wrapper collector, collectible, collecting candy, confectionery, confections, coupons, Halloween, Halloween candy, newspaper ads, packaging, sweets, vintage candy wrapper, wrapper. Bookmark the permalink.

2 Responses to Vintage Halloween Candy Newspaper Ad Circulars from the 80’s and 90’s!