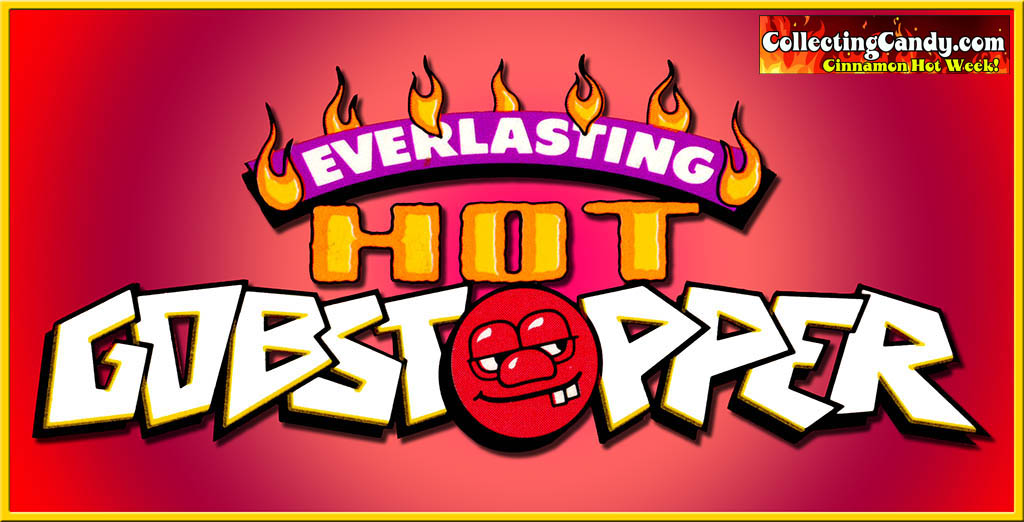 Welcome back to the second day of our Cinnamon Hot Week!  Today we’ll be shining a delicious light on a treat from the early 1990’s; Willy Wonka’s Everlasting HOT Gobstoppers!

Released all the way back in 1991, Everlasting Hot Gobstoppers were what you might expect, a cinnamon hot version of the Willy Wonka classic Gobstopper product.  At the time, a standard non-hot Everlasting Gobstopper box looked like this: 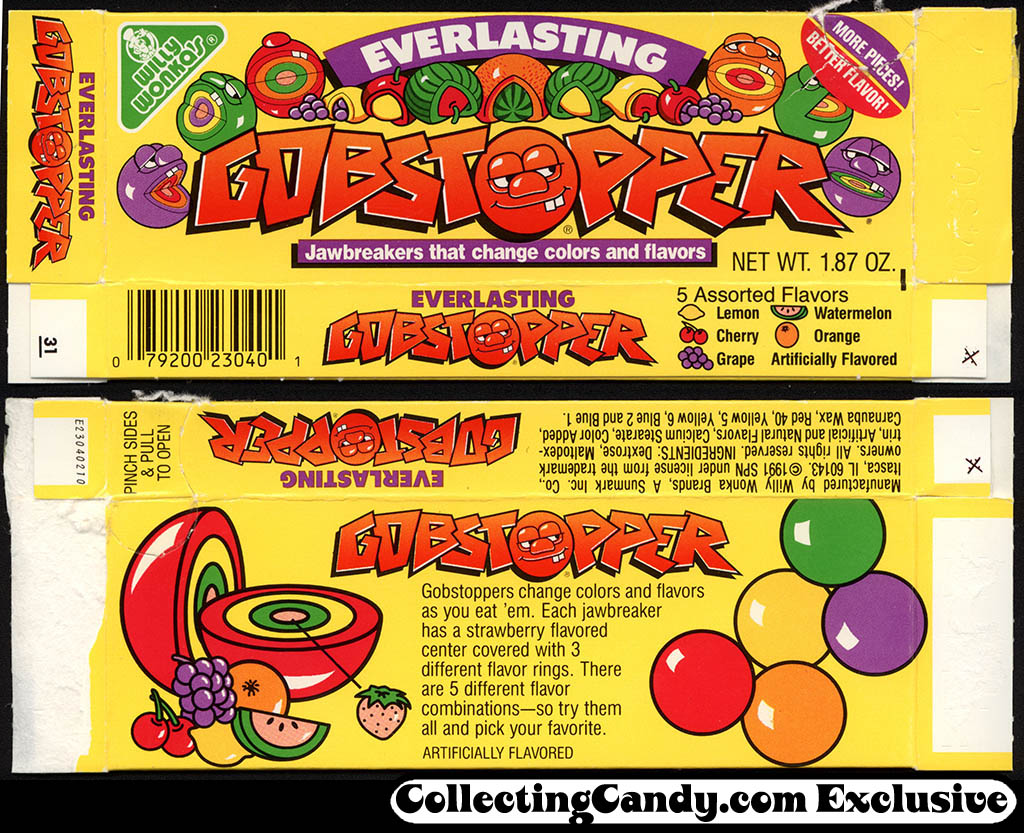 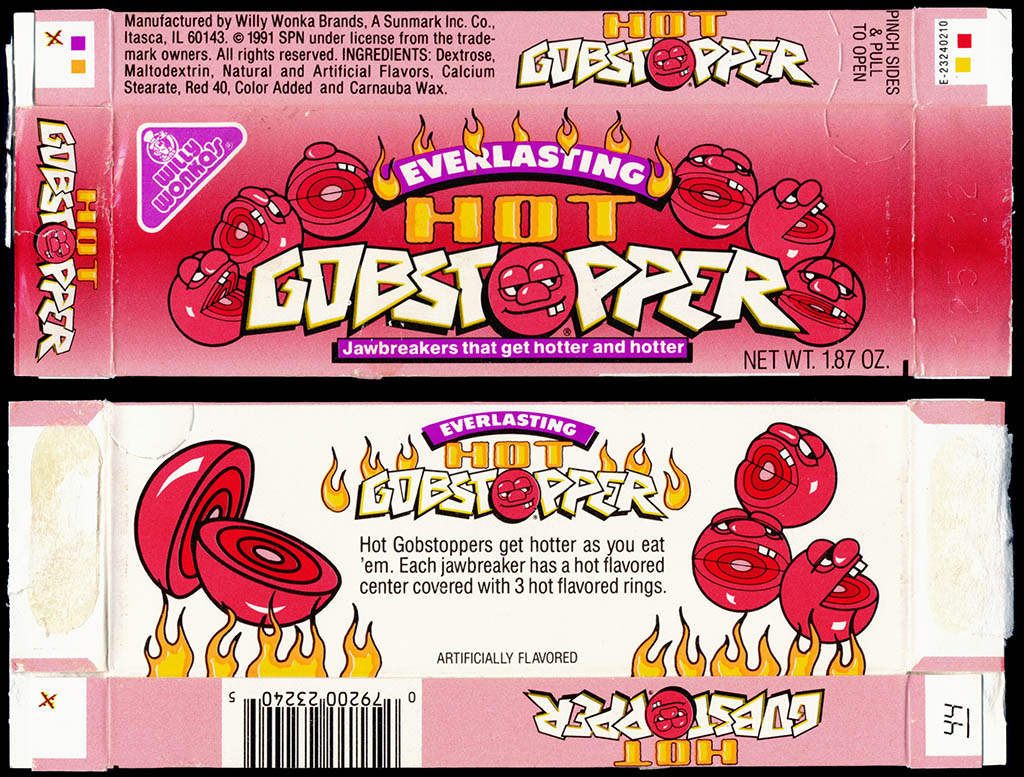 Unfortunately, Everlasting Hot Gobstoppers didn’t catch on and were discontinued within a few years.   While that might be the end of the story for Hot Gobstoppers, it’s not all there is to tell.   Looking back, Willy Wonka’s Hot Gobstoppers have some interesting ancestral confectionery roots that I’d like to explore.

If we stretch the confectionery-evolutionary lens back even further, you can find a product from the 1960’s which I would consider the grandfather of Everlasting Hot Gobstoppers; Breaker Confections “H” Bombs cinnamon jawbreakers: 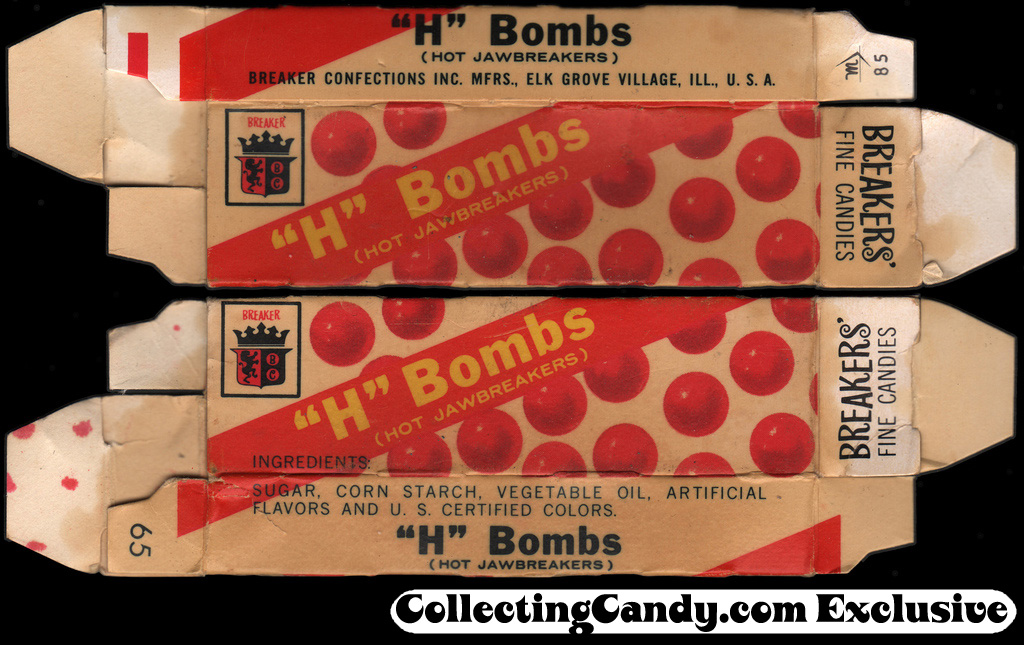 The H-Bomb-to-Hot-Gobstopper lineage is clarified when you realize that Breaker Confections (the maker of “H” Bombs) would go on to be the original manufacturers of Everlasting Gobstoppers in the 1970’s.  Breaker Confections along with Gobstoppers would be brought under the Willy Wonka Brands umbrella by the early 1980’s with Daredevils and Hot Gobstoppers to follow.  So as you can see, it all fits together in one devilishly hot and deliciously layered history.

And that’s everything for today’s Hot Week entry and the story of Willy Wonka’s Everlasting Hot Gobstoppers.  See you next time!

A New York City based writer, editor and sometimes actor. After spending much of the 1990′s in the comic book business helping tell the stories of Marvel Comics’ X-Men as series editor, he has since split his time between developing his own entertainment properties while still consulting and working on others. Having been described as “the Indiana Jones of lost and forgotten candy”, Jason is one of the country’s premier candy collectors and historians with his discoveries appearing in countless blogs, magazines, newspaper articles, and books. Always happy to share his knowledge and unique perspectives on this colorful part of our popular culture, Jason has consulted with New York’s Museum of Food and Drink and has also been a featured guest on Food Network’s Heavyweights, France’s M6 Capital, and New York’s TheActionRoom.com. My Google Profile+
View all posts by Jason Liebig →
This entry was posted in 1960's, 1970's, 1980's, 1990's, Boxed, Wonka and tagged 60's candy, 70's candy, 80's candy, 90's candy, candy collecting, candy collection, candy collector, candy wrapper collection, candy wrapper collector, cinnamon, collectible, collecting candy, confectionery, confections, Gobstopper, Gobstoppers, hot cinnamon, mascot, packaging, sweets, vintage candy wrapper, Willy Wonka, Wonka, wrapper. Bookmark the permalink.