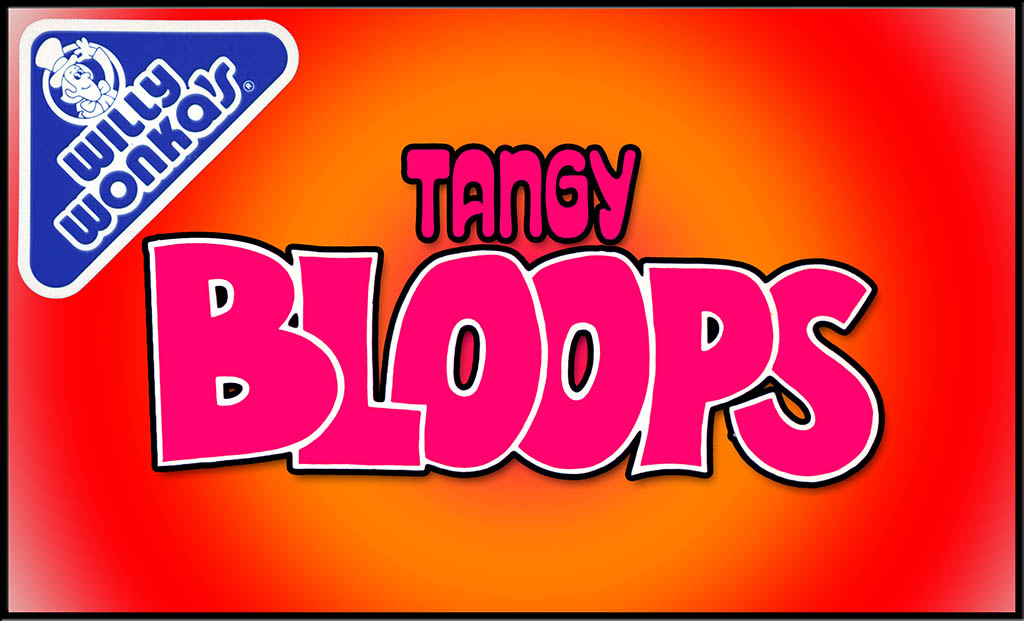 It’s been a couple of weeks since I last pulled something from the 1970’s archives to share, so today I’m presenting a Wonka treat you’ve likely never seen before:  Tangy Bloops Super Sour Candy!

Like many Wonka-branded candy items, Bloops actually started out as a Breaker Confections product with the Wonka branding arriving years later.  First sold in the early 1970’s, it doesn’t appear that Tangy Bloops made it into the 1980’s, at least not as an individually-packaged brand.

Here’s a small cellophane wrapper for Tangy Bloops from my collection.  [Note: It’s the only wrapper or package of any kind for these that I’ve ever come across.] 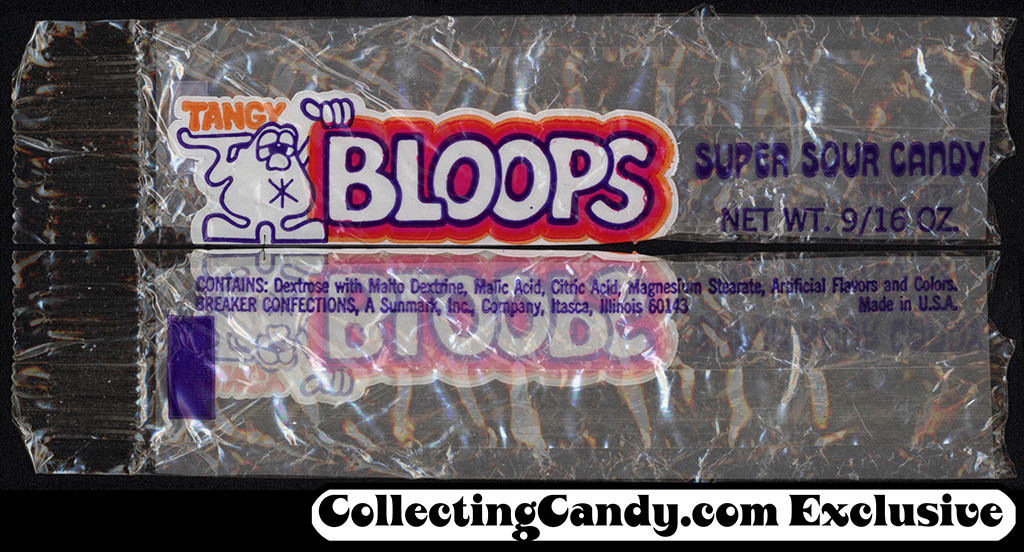 As with much of Breaker’s product-line at the time, Tangy Bloops were also sold in bulk and at vending.   Here is a vintage vending insert card from the 1970’s for Bloops.  [For those that don’t know, a vending card like this one would have been inserted into the front of a coin-twist vending machine – like a gumball machine.  The card’s job was to identify the contents of the vending machine, which would often change throughout the year.] 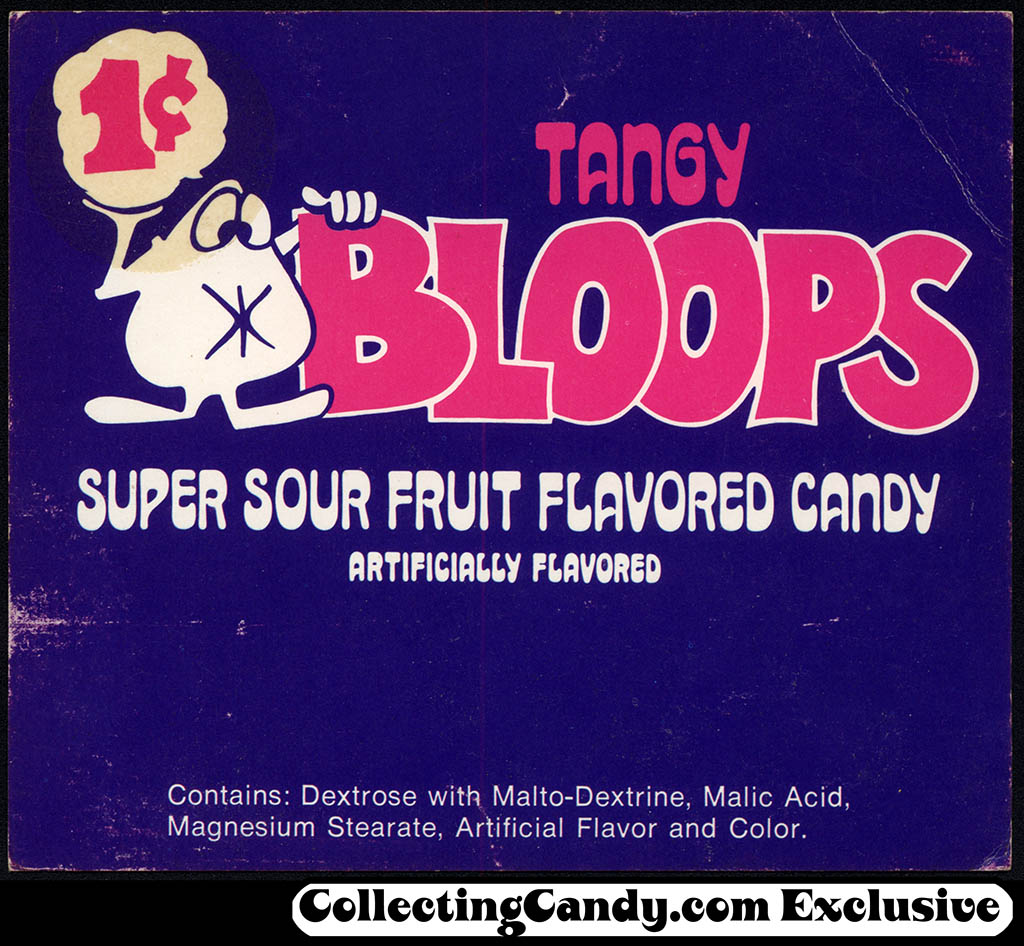 I mentioned earlier that Bloops were a Wonka item, because they did end up becoming one but likely only within the bulk vending category.   While it’s possible that there’s a standard Bloops pack or box from the 80’s with Wonka branding on it, for the moment my guess is that it’s not the case.

But in vending, Tangy Bloops survived long enough to be brought into the Wonka family fold and here’s a vending insert card from 1984 to prove it: 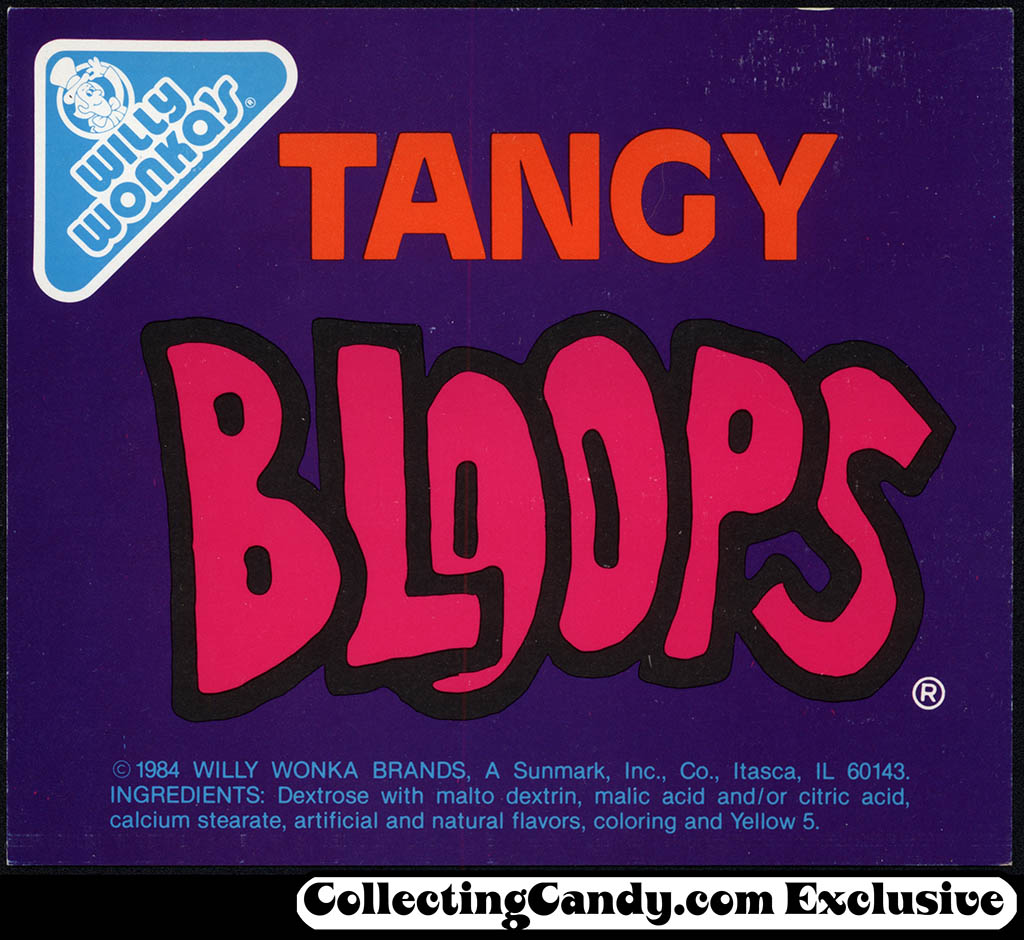 Past the mid-1980’s I can’t say with any certainty that Tangy Bloops were still being sold.  They are a candy product I don’t remember seeing at any time in my youth, so who knows?  For now at least we have these three pieces to examine and mark the decade when Tangy Bloops roamed the confectionery landscape.

A New York City based writer, editor and sometimes actor. After spending much of the 1990′s in the comic book business helping tell the stories of Marvel Comics’ X-Men as series editor, he has since split his time between developing his own entertainment properties while still consulting and working on others. Having been described as “the Indiana Jones of lost and forgotten candy”, Jason is one of the country’s premier candy collectors and historians with his discoveries appearing in countless blogs, magazines, newspaper articles, and books. Always happy to share his knowledge and unique perspectives on this colorful part of our popular culture, Jason has consulted with New York’s Museum of Food and Drink and has also been a featured guest on Food Network’s Heavyweights, France’s M6 Capital, and New York’s TheActionRoom.com. My Google Profile+
View all posts by Jason Liebig →
This entry was posted in 1970's, 1980's, Nestle, Sour Candy, Wonka and tagged 1970's, 1970's candy, 1980's candy, 70's, 70's candy, 80's candy, Breaker, Breaker Confections, candy collecting, candy collection, candy collector, candy wrapper collection, candy wrapper collector, collectible, collecting candy, confectionery, confections, mascot, packaging, sour, sweets, vintage candy wrapper, Willy Wonka, Wonka, wrapper. Bookmark the permalink.