Sometimes a store exclusive candy offering is easy to spot – as it will be talked about in the trade press or have a large graphic on the package indicating it as special.  But with this new release of Strawberry-Banana Laffy Taffy, I very nearly missed it completely.  And if I could so easily overlook it, I figured it might be a good idea to put out the word about the release here – so others could seek it out to sample.

Part of the fun (and one of the challenges) of collecting candy is trying to keep up with new and seasonal releases because there isn’t a central news service to let you know everything that’s out there or what’s coming.  Because of that, I often find myself entering into “hunter mode” whenever I walk down a candy isle.  There are so many products that come out that I’ll routinely encounter things I didn’t expect to see.

And so it was that a few weeks ago I was surprised to find this small bit of signage in my local 7-Eleven candy isle, all the way near the floor hanging off the bottom shelf: 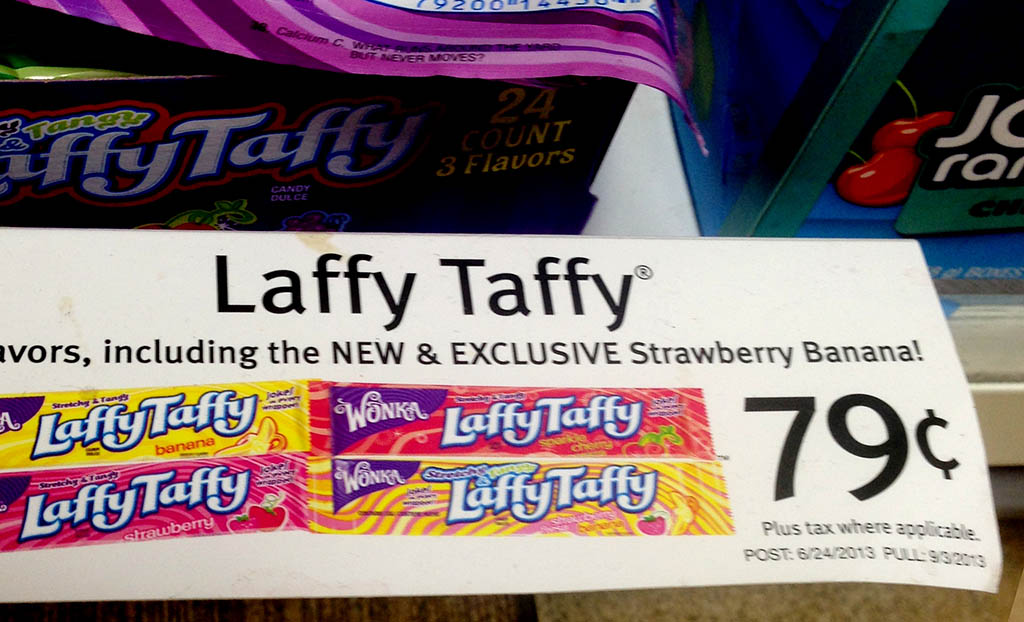 It was the “New & Exclusive” bit that caught my attention, even though at first glance I had overlooked it as simply a sale price sign.  But I realized it was much more and that 7-Eleven had gotten an exclusive Laffy Taffy flavor release.

Though my 7-Eleven store had the sign pointing out the Strawberry-Banana Laffy Taffy, they didn’t have the exclusive flavor in stock.  The following week I was in Staten Island and on the third 7-Eleven I visited, I found the elusive and exclusive flavor.   And here it is: 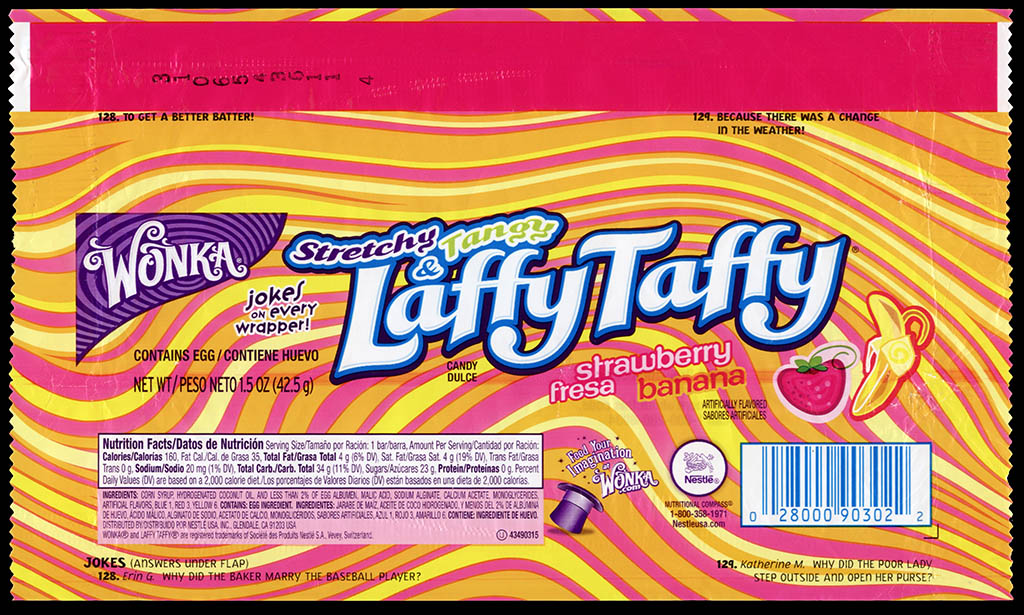 Without any markings to indicate that it’s a 7-Eleven exclusive, it’s possible I might not have ever noticed it or picked it up, assuming that I had a “full set” of contemporary Laffy Taffy wrappers already.

Laffy Taffy fans might be scratching their heads right about now thinking that they’d seen this flavor before, and they have.  Before the last major Wonka packaging redesign, Strawberry-Banana had been a part of the standard Laffy Taffy flavor assortment.  Here’s what the 2007 version looked like: 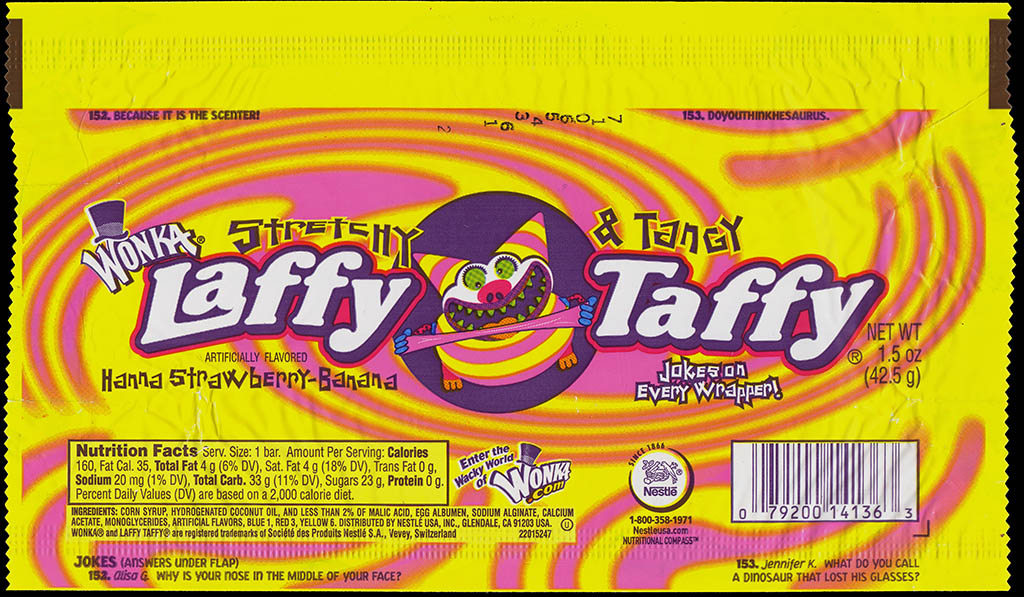 So this was actually a discontinued flavor that is now making its return as a store exclusive.  If you were a fan of this one, now is your chance to seek it out and enjoy the flavor combination again… if you’ve got a 7-Eleven nearby.

I wanted to note that the flavors were also released together in boxed form earlier this year (though as individual Strawberry and Banana fun-size pieces): 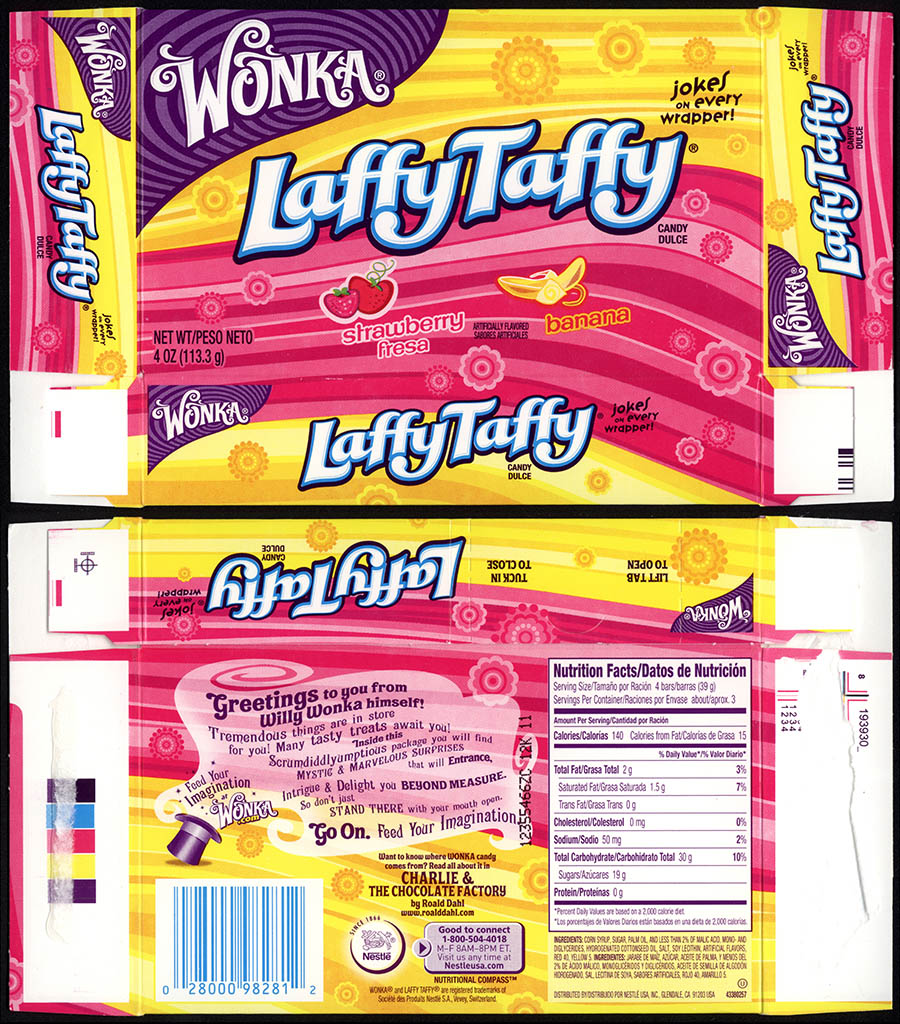 And just to wrap up today’s post, here are the rest of the currently-available Laffy Taffy flavor wrappers.  If  you’ve seen any that are not included below – let me know! 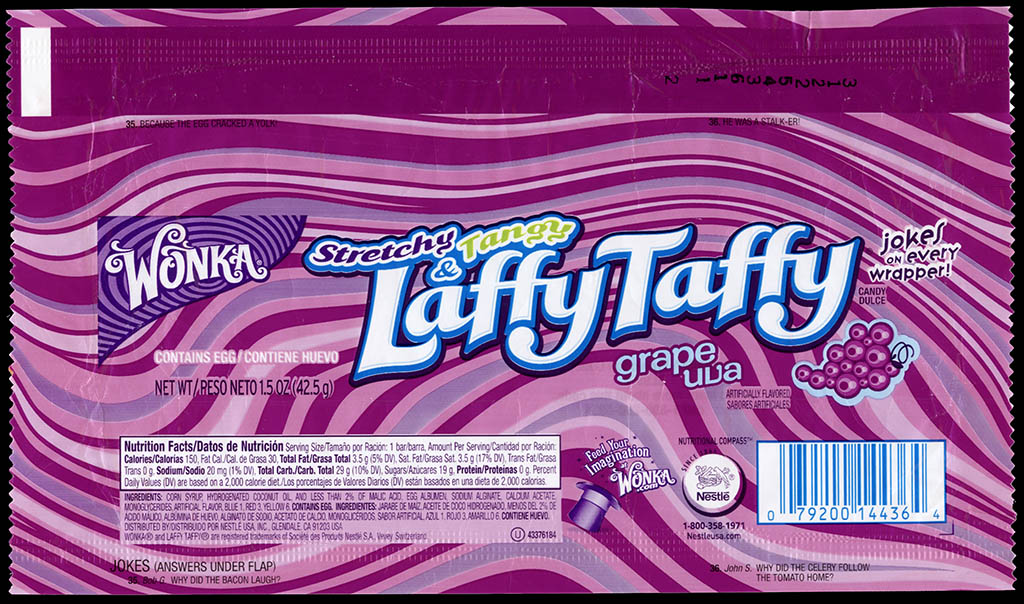 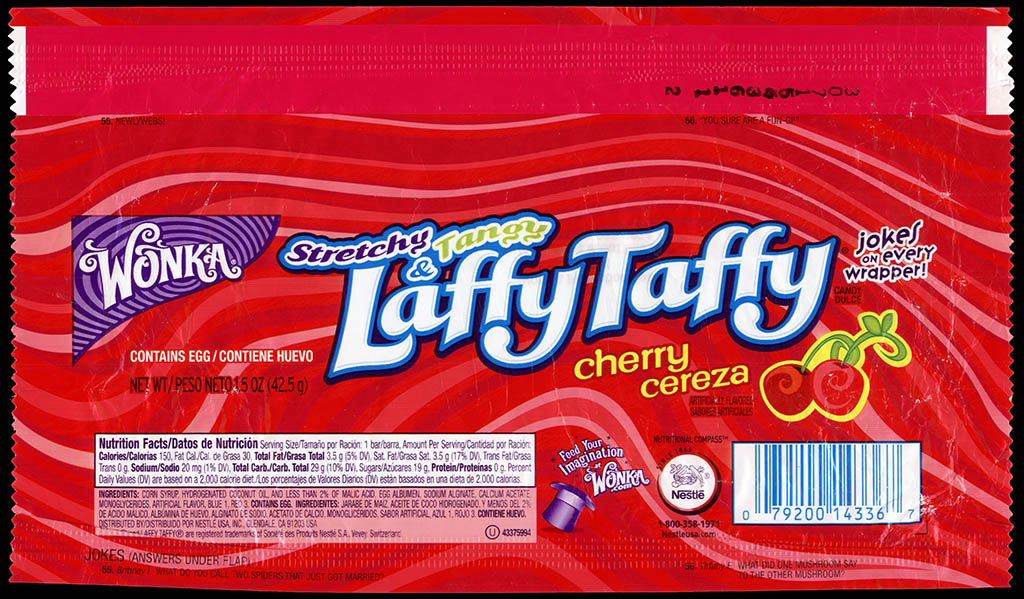 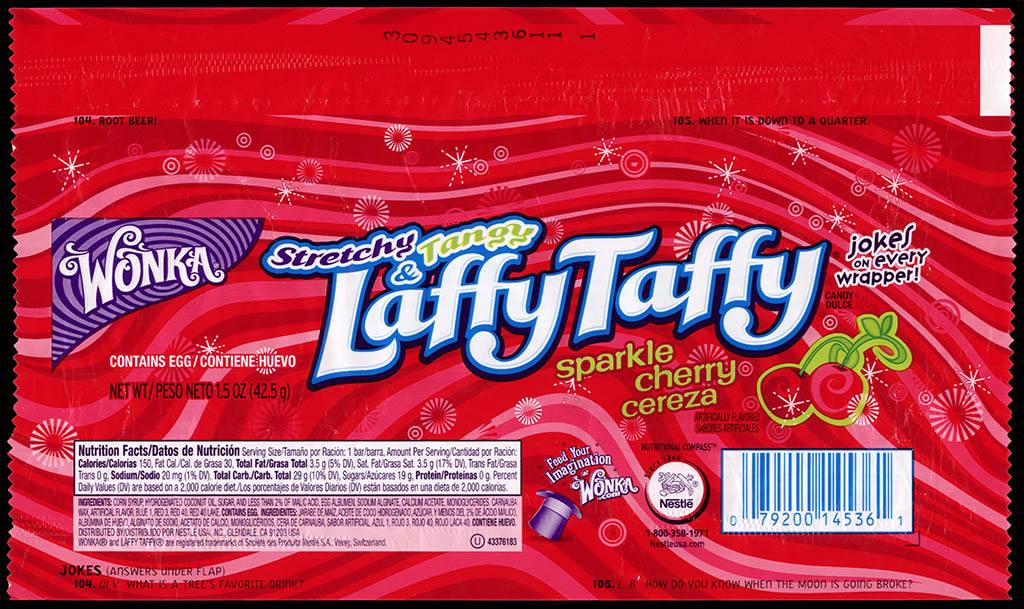 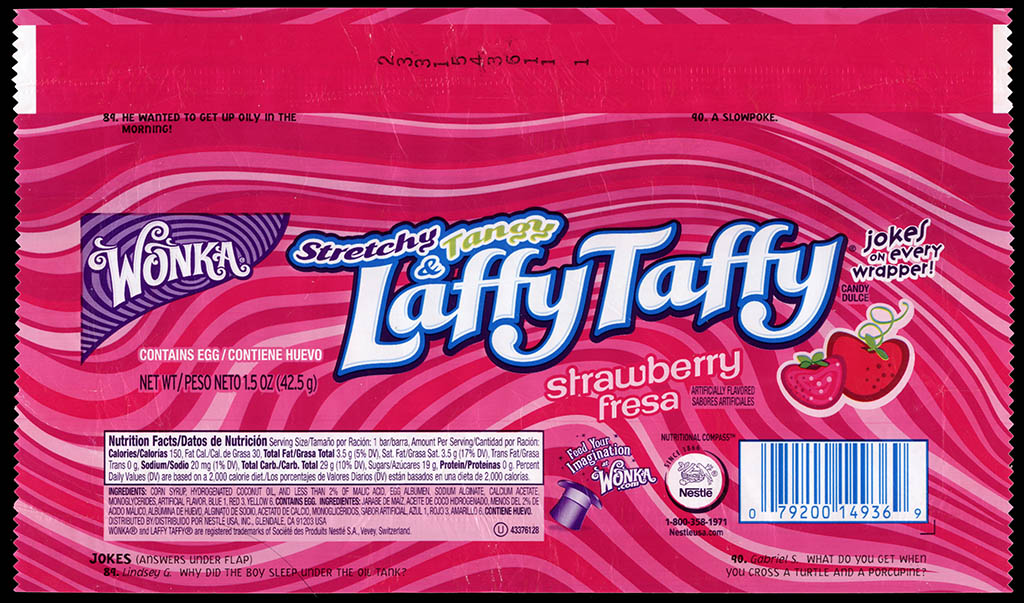 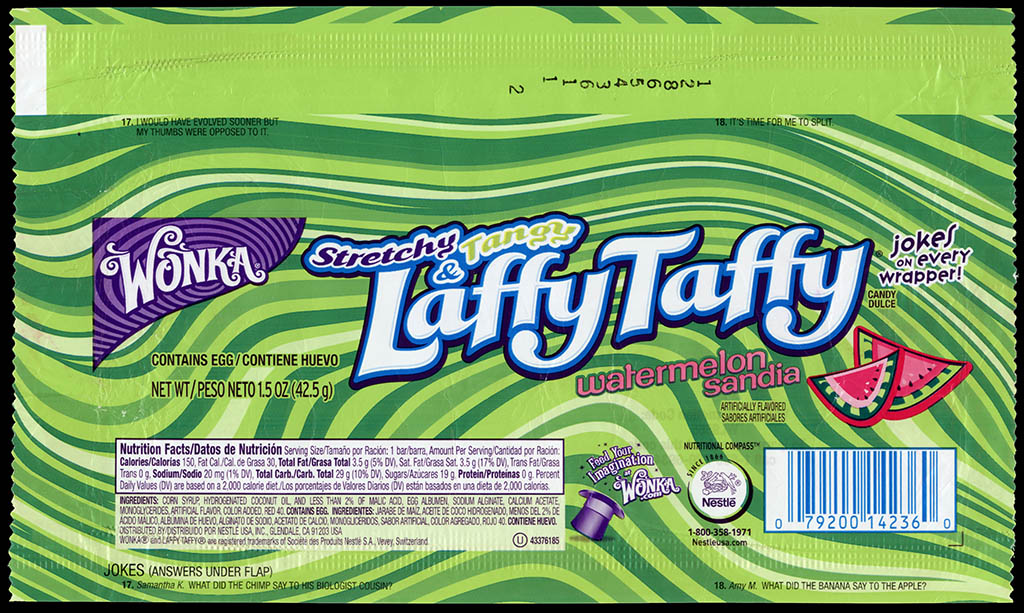 And that’s everything I’ve got today on 7-Eleven’s exclusive Laffy Taffy flavor.   Eventually I plan to return to this topic when I put together a full historical retrospective on Laffy Taffy and Tangy Taffy – it’s quite a history!  Until then I’ll be keeping my eyes peeled for other unexpected exclusives.

A New York City based writer, editor and sometimes actor. After spending much of the 1990′s in the comic book business helping tell the stories of Marvel Comics’ X-Men as series editor, he has since split his time between developing his own entertainment properties while still consulting and working on others. Having been described as “the Indiana Jones of lost and forgotten candy”, Jason is one of the country’s premier candy collectors and historians with his discoveries appearing in countless blogs, magazines, newspaper articles, and books. Always happy to share his knowledge and unique perspectives on this colorful part of our popular culture, Jason has consulted with New York’s Museum of Food and Drink and has also been a featured guest on Food Network’s Heavyweights, France’s M6 Capital, and New York’s TheActionRoom.com. My Google Profile+
View all posts by Jason Liebig →
This entry was posted in Nestle, Wonka and tagged 7-11, 7-Eleven, candy collecting, candy collection, candy collector, candy wrapper collection, candy wrapper collector, collectible, collecting candy, confectionery, confections, exclusive, packaging, redesign, Seven Eleven, sweets, Tangy Taffy, vintage candy wrapper, Wonka, wrapper. Bookmark the permalink.