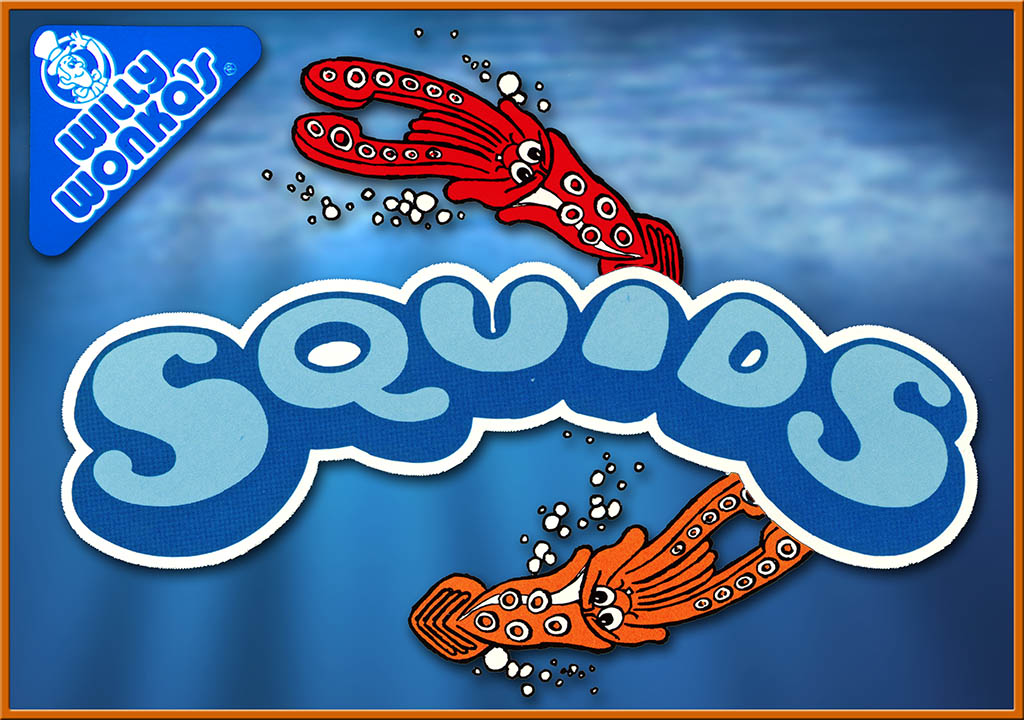 Here at CollectingCandy.com I tend to throw around the adjectives “lost” and “forgotten”  from time-to-time and I don’t think I’m being overly dramatic when I do.

In the realm of vintage candy countless products have come and gone, seemingly in the span of a baseball season or a grade school semester.   So even if you sampled one of these brief releases you might not remember it today.   Such was the case with me and my personal recollections of Willy Wonka’s Squids.

Willy Wonka’s Squids were a large-size gummy candy that was regionally test-marketed in 1983 but sold nationally in 1984.

It was during that Wonka Squids 1984 release that I saw them and might have even tried one.  Even so, I can confidently say that I hadn’t considered them in the slightest until I saw a vintage promotional brochure for them late last year.  When I saw that brochure, my memory of Squids came rushing back in. 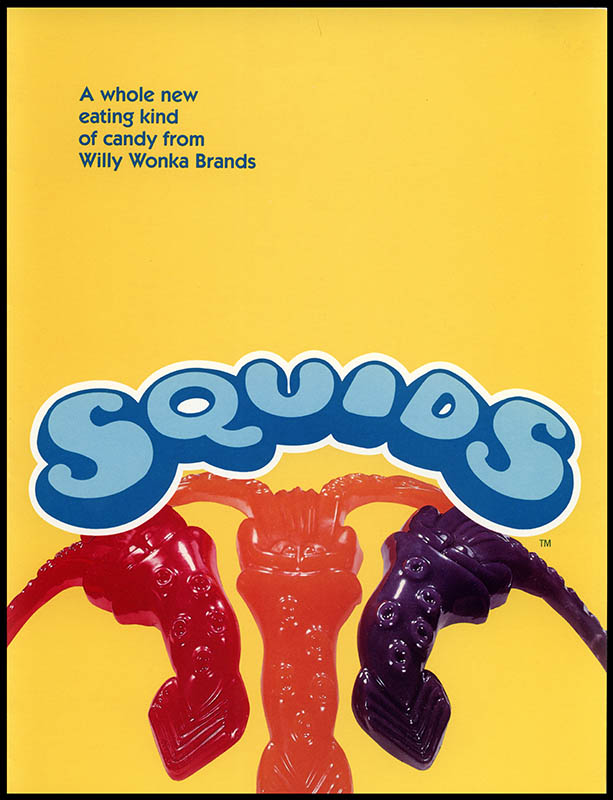 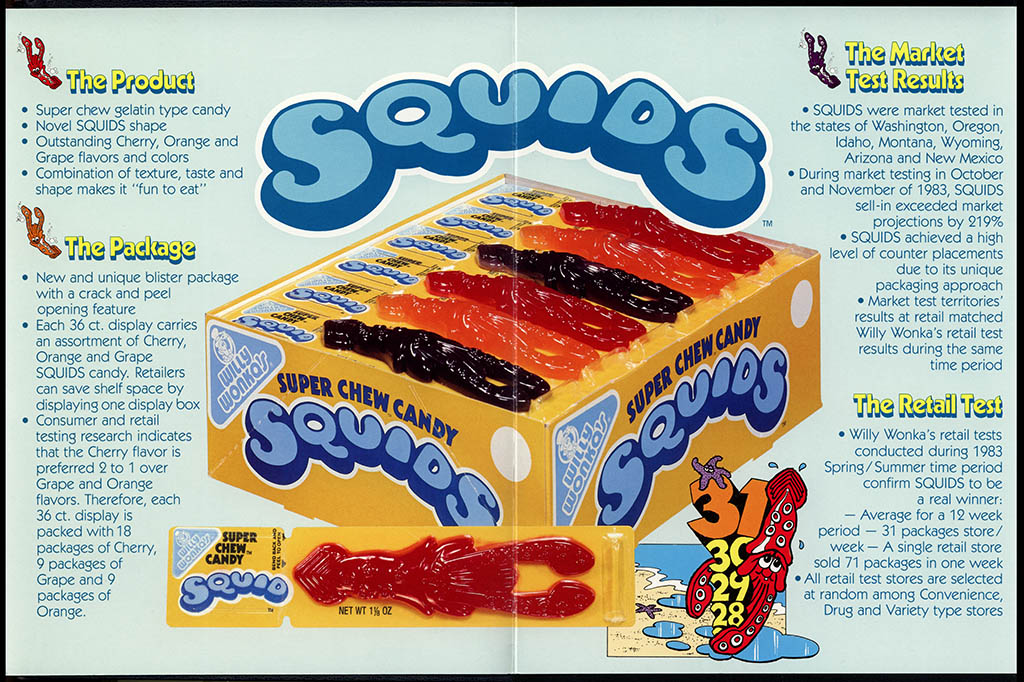 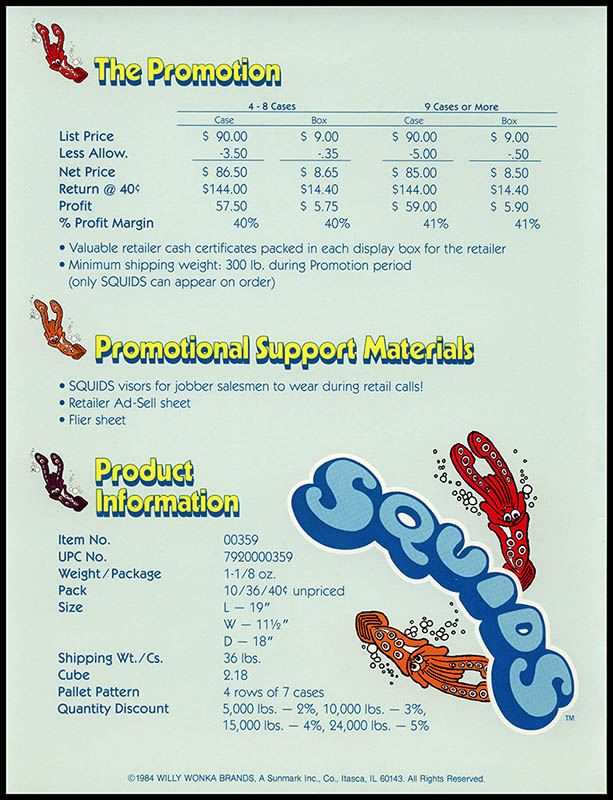 As  you can see from the images, the packaging for Squids gummies were unusual in that they were a blister pack with a “crack-and-peel” opening mechanism.   The nature of that packaging would have made it difficult to save and store, which is certainly one of the reasons I’ve never come across a package for one of these 1980’s Wonka delights.

In fact the only images of Wonka Squids that I know of are the ones found in this promotional brochure.  So it currently stands as the singular historical record of this formerly-forgotten 80’s gummy treat.

Do you have any memories of Willy Wonka’s Squids?  If you do, I’d love to hear about them.

A New York City based writer, editor and sometimes actor. After spending much of the 1990′s in the comic book business helping tell the stories of Marvel Comics’ X-Men as series editor, he has since split his time between developing his own entertainment properties while still consulting and working on others. Having been described as “the Indiana Jones of lost and forgotten candy”, Jason is one of the country’s premier candy collectors and historians with his discoveries appearing in countless blogs, magazines, newspaper articles, and books. Always happy to share his knowledge and unique perspectives on this colorful part of our popular culture, Jason has consulted with New York’s Museum of Food and Drink and has also been a featured guest on Food Network’s Heavyweights, France’s M6 Capital, and New York’s TheActionRoom.com. My Google Profile+
View all posts by Jason Liebig →
This entry was posted in 1980's, Gummies, Wonka and tagged 1980's, 1980's candy, 1980's Wonka, 80's, 80's candy, 80's gummies, 80's Wonka, candy collecting, candy collection, candy collector, candy wrapper collection, candy wrapper collector, collectible, collecting candy, confectionery, confections, Gummies, packaging, sweets, vintage candy wrapper, Willy Wonka, wrapper. Bookmark the permalink.