Just Born on the 4th of July — Happy Independence Day with 2003’s Mike and Ike Stripes!

Here in the United States we celebrate our Independence Day every July 4th and to mark the occasion this year I thought I’d focus on one of Just Born’s patriotic offerings from a decade ago; Mike and Ike Stripes!

Mike and Ike Stripes candies came in red, white and blue colors (with corresponding cherry, vanilla cream and blueberry flavors) and were marketed to be sold in conjunction with all of the major summer holidays.  Here’s the flyer that was presented to the candy trade promoting them: 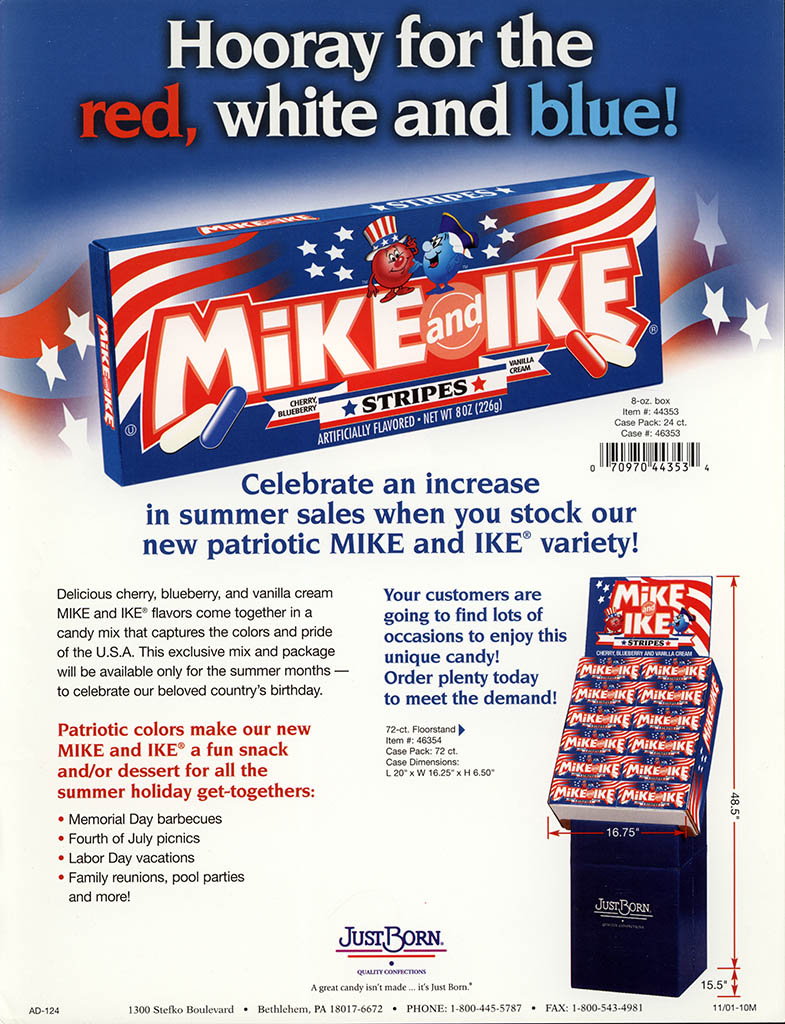 I’m fortunate to have a Mike and Ike Stripes box in my collection and here it is: 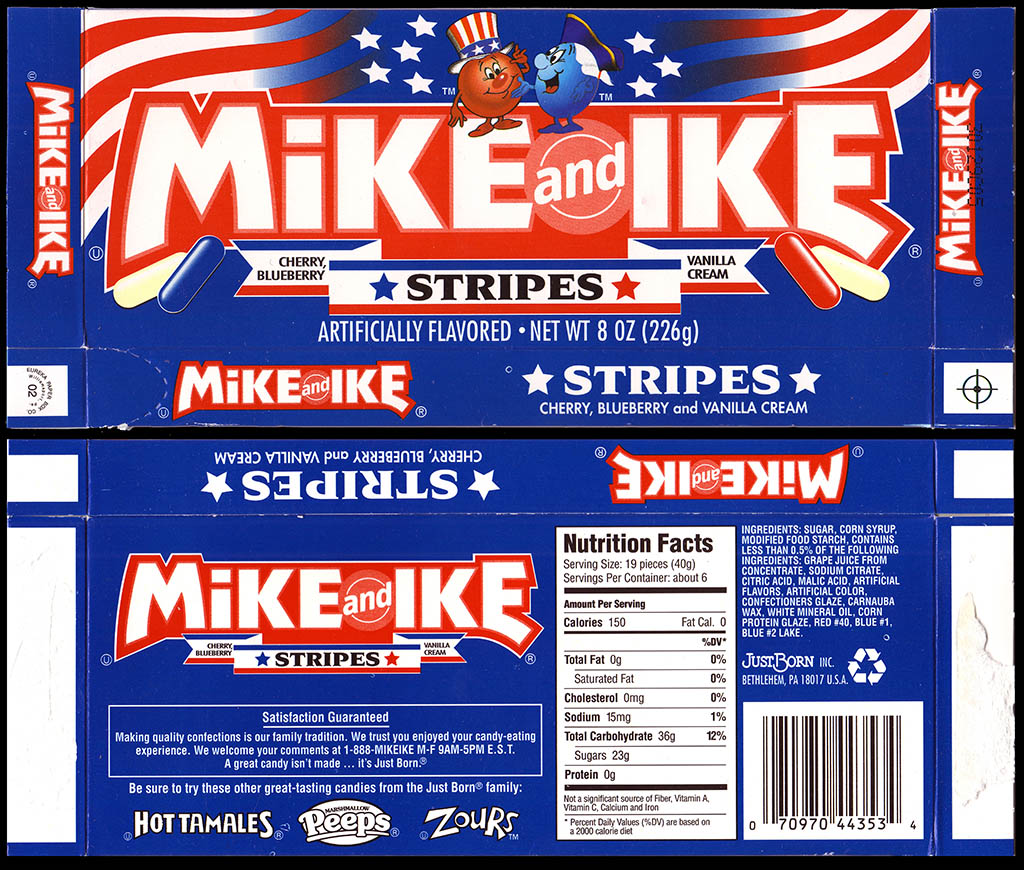 It’s great to see the 1990’s-2000’s Mike and Ike fruit mascots dressed up in patriotic garb for the Stripes package, and it makes that box one of my favorites from the early 2000’s.

Beyond Mike and Ike, 2003 also saw patriotic releases of Just Born’s classic Peeps, with Patriotic Peeps as well as Peeps and Stars. 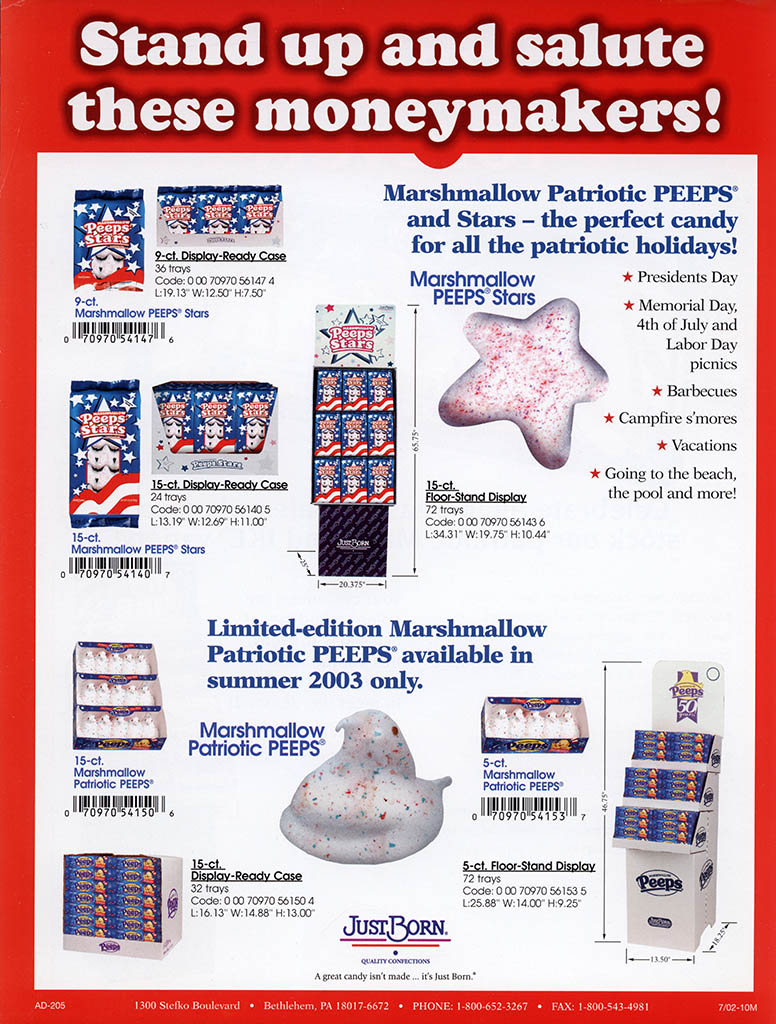 I don’t have any examples of the Patriotic Peeps packages in my collection, so I’ll highlight two of the sections from the flyer for close-ups: 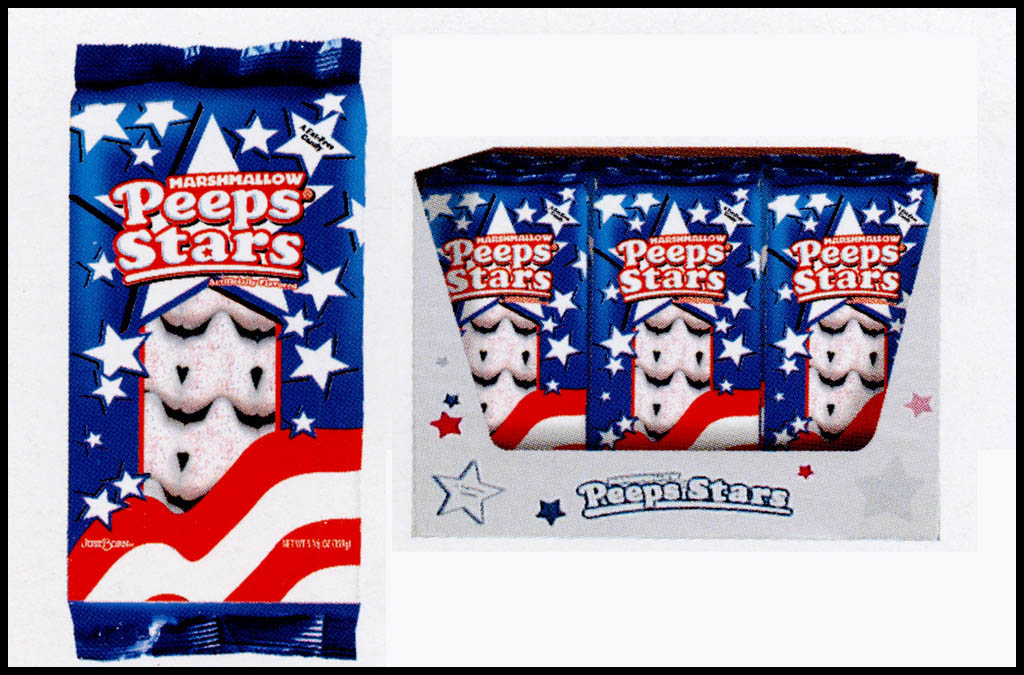 And that’s everything I’ve got to share for this 4th of July, 2013.   I hope everyone has a great holiday weekend with lots of fun, family and friends.

If you’re shooting fireworks, be careful and whatever else you might be doing – be safe out there!  Happy 4th of July!

A New York City based writer, editor and sometimes actor. After spending much of the 1990′s in the comic book business helping tell the stories of Marvel Comics’ X-Men as series editor, he has since split his time between developing his own entertainment properties while still consulting and working on others. Having been described as “the Indiana Jones of lost and forgotten candy”, Jason is one of the country’s premier candy collectors and historians with his discoveries appearing in countless blogs, magazines, newspaper articles, and books. Always happy to share his knowledge and unique perspectives on this colorful part of our popular culture, Jason has consulted with New York’s Museum of Food and Drink and has also been a featured guest on Food Network’s Heavyweights, France’s M6 Capital, and New York’s TheActionRoom.com. My Google Profile+
View all posts by Jason Liebig →
This entry was posted in Boxed, Holiday and tagged 4th of July, candy collecting, candy collection, candy collector, candy wrapper collection, candy wrapper collector, collectible, collecting candy, confectionery, confections, holiday, Independence Day, Just Born, Mike and Ike, packaging, patriotic, sweets, vintage candy wrapper, wrapper. Bookmark the permalink.

2 Responses to Just Born on the 4th of July — Happy Independence Day with 2003’s Mike and Ike Stripes!