Man of Steel, the latest cinematic interpretation of DC Comics’ Superman premiered at #1 in theaters over this past weekend.  It made me realize this would be a great time to do a Superman-related post.  So today I’d like to talk about a pair of promotions Nestle did around the time of the first Christopher Reeve Superman film.

In 1978, Warner Brothers released Superman: The Movie starring Christopher Reeve.  While Superman had long been a popular character for licensed products, the film put things into overdrive.

The Nestle candy company quickly jumped on board and in 1979 they offered a mail-away promotion for a Superman ring.  The offer appeared on the wrappers of four of their biggest sellers; Nestle Crunch, Choco’lite, $100,000 bar, and Nestle Milk Chocolate.   Here is what one of the in-store mail-away coupons looked like: 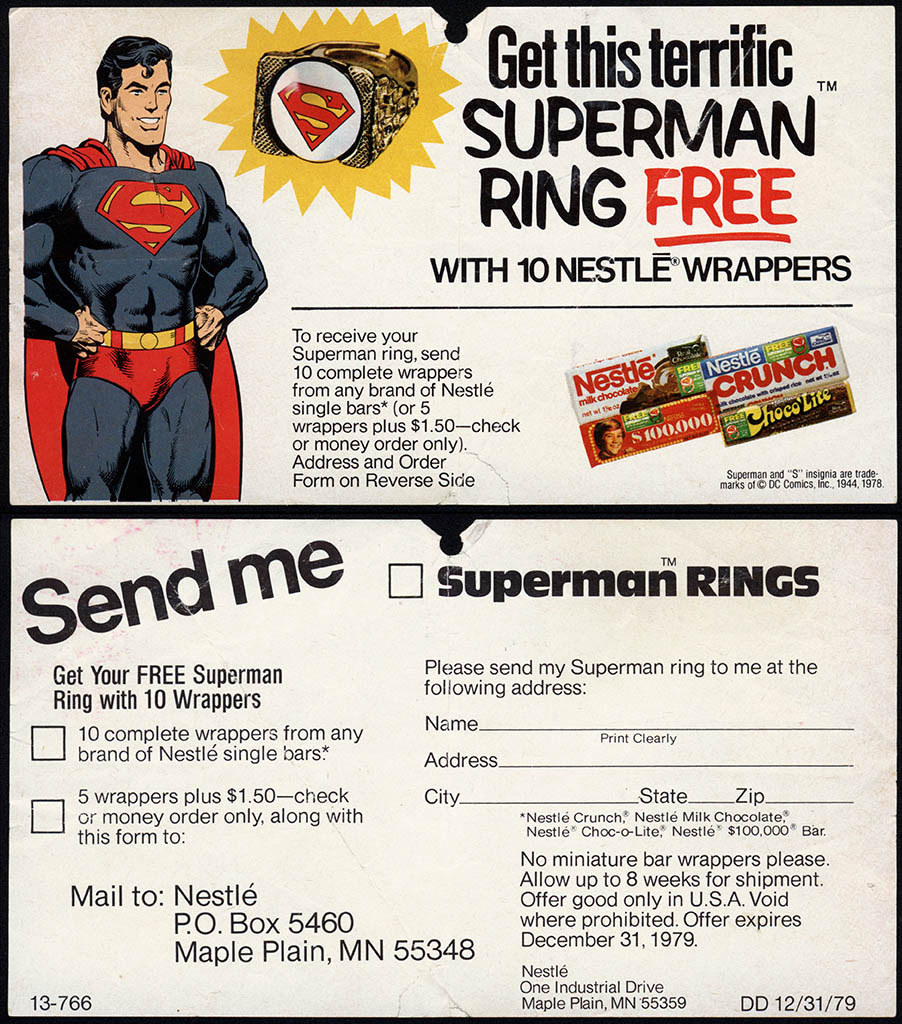 The wrappers with the offer printed on them are pictured on that coupon.   I have three of the four that I can show you today: 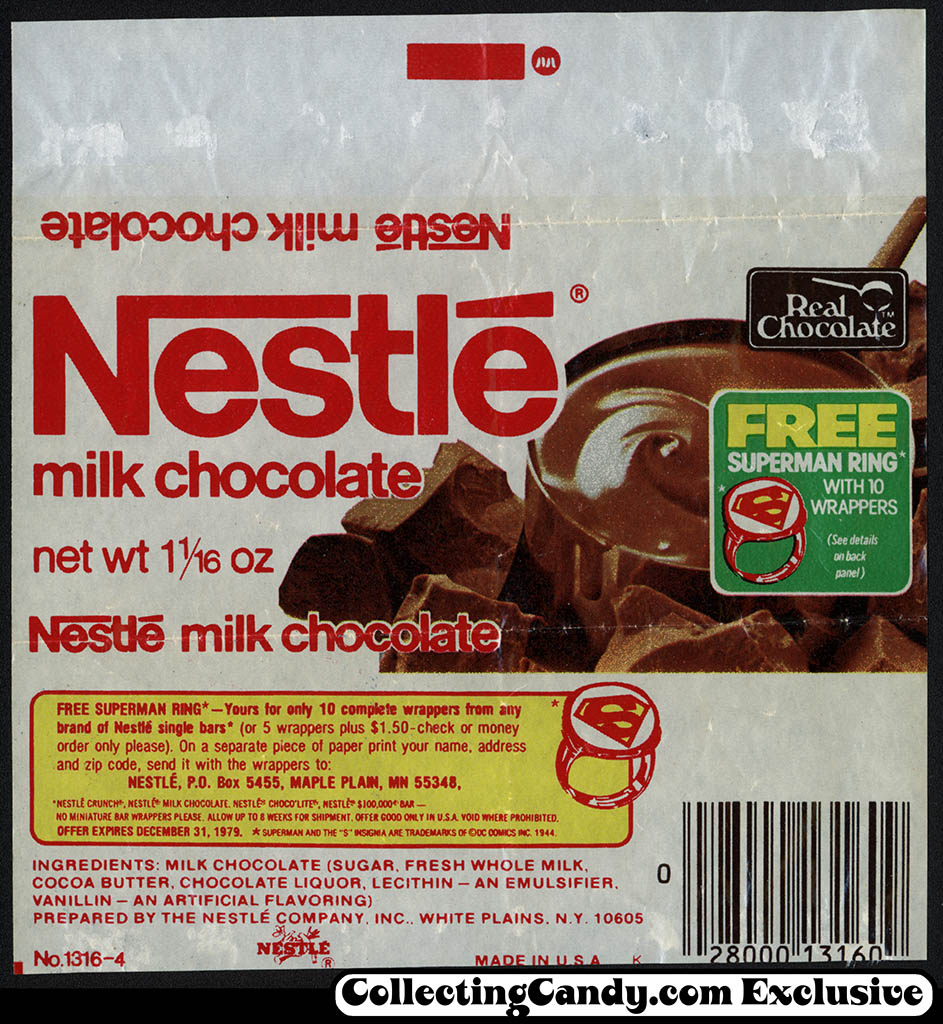 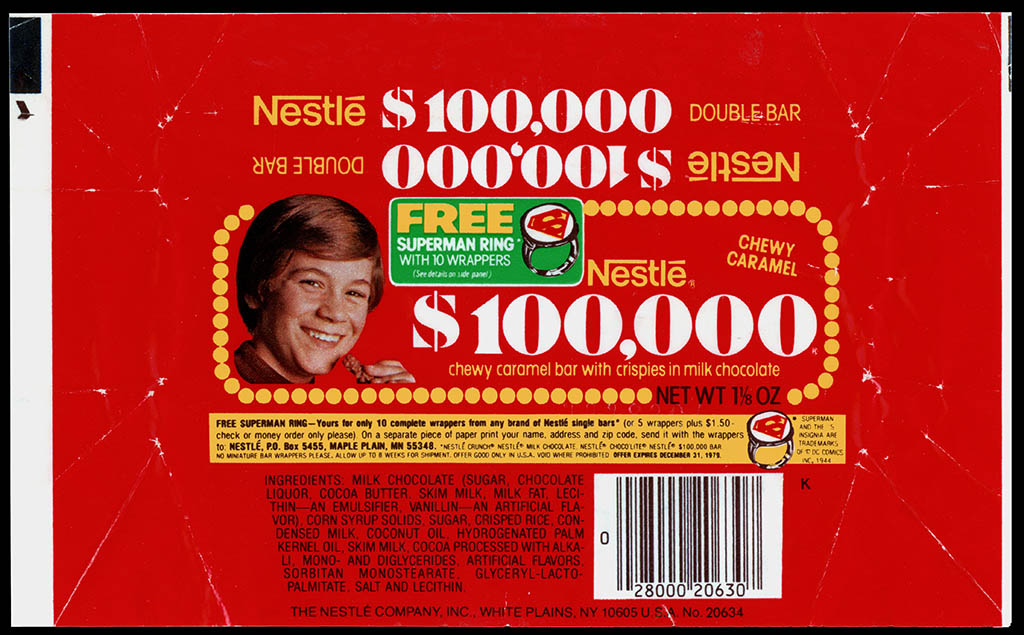 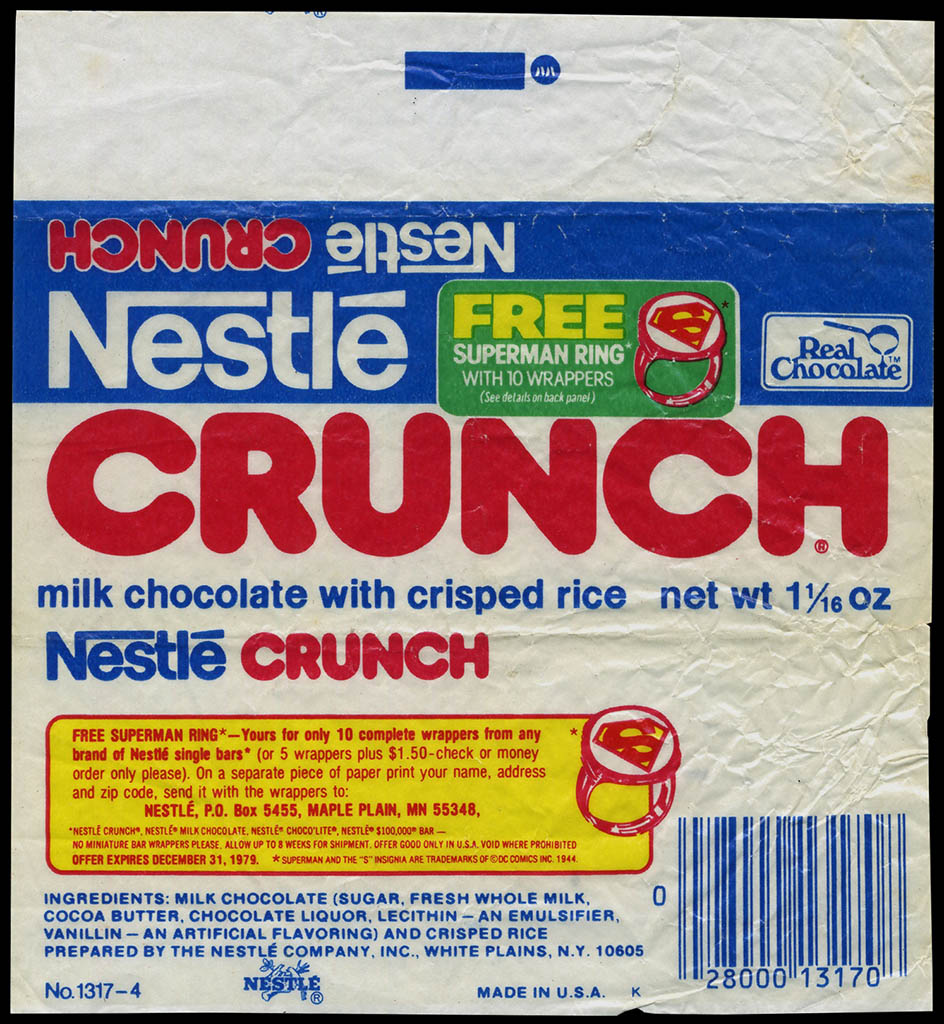 [Somewhere in my files, I know I’ve got one of the actual mail-away rings, but I didn’t have time to search for it this weekend.]

Though my documentation on it is not as clear, Nestle did at least one other Superman-related promotion during this period (and it appears to have preceded the mail-away ring promo) – this time for a mail-away Superman t-shirt.

I have a partial newspaper clipping for the promotion as well as a coupon that accompanied the actual shirts when they were mailed out: 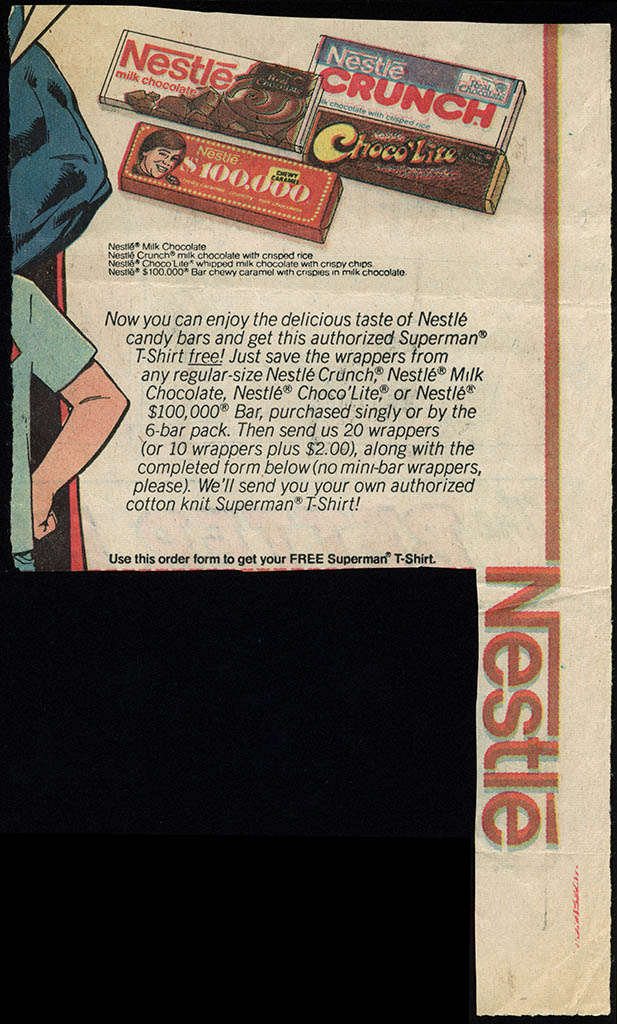 It’s unfortunate that I don’t have a more complete example of the newpaper ad as it features an illustration of Superman along with a kid in his authorized Superman t-shirt.

Superman t-shirts mailed out through this promotion included a coupon to order more of them: 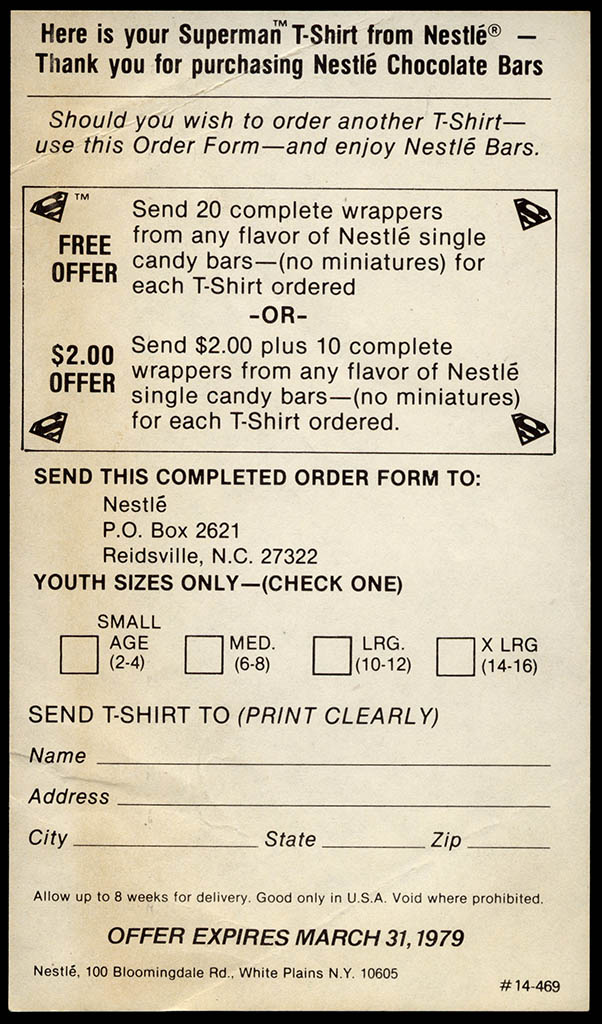 I’ve never seen a wrapper with the Superman t-shirt offer on it, so I’m guessing that the promotion was something they rushed out to more closely coincide with the movie release, and the Superman ring offer followed.

Of course, there have been other Superman-related candy and gum offerings over the years and eventually I’ll circle back around to cover those.   For today I wanted to focus on the Nestle promotions tied into 1978’s Superman: The Movie.

Well hold that — I do have one more thing to show today – it’s the candy box that I used to create today’s title image.  Here it is: 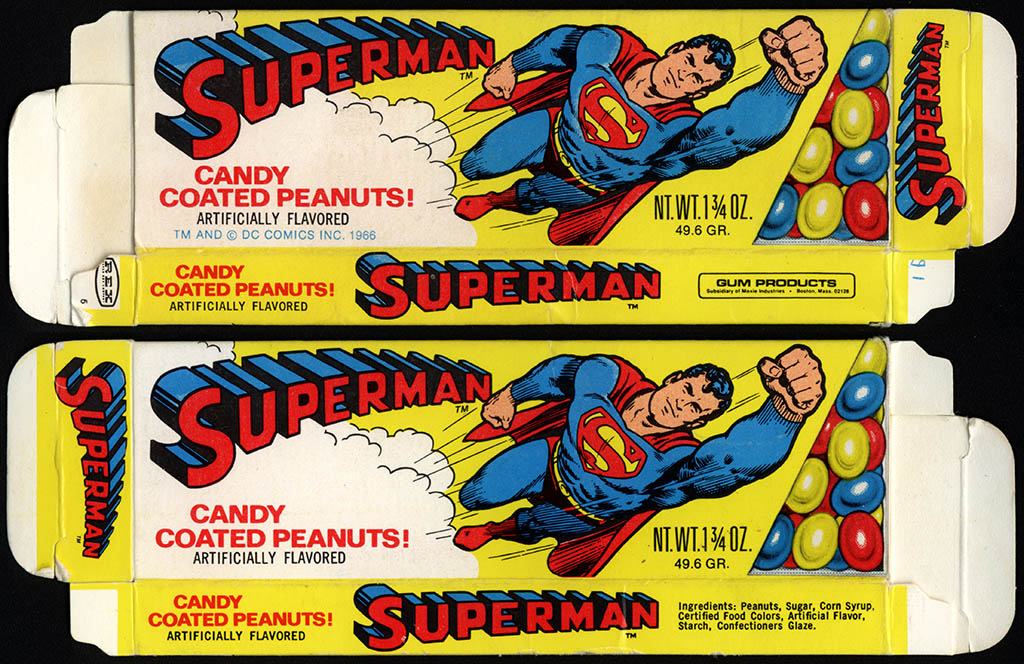 A New York City based writer, editor and sometimes actor. After spending much of the 1990′s in the comic book business helping tell the stories of Marvel Comics’ X-Men as series editor, he has since split his time between developing his own entertainment properties while still consulting and working on others. Having been described as “the Indiana Jones of lost and forgotten candy”, Jason is one of the country’s premier candy collectors and historians with his discoveries appearing in countless blogs, magazines, newspaper articles, and books. Always happy to share his knowledge and unique perspectives on this colorful part of our popular culture, Jason has consulted with New York’s Museum of Food and Drink and has also been a featured guest on Food Network’s Heavyweights, France’s M6 Capital, and New York’s TheActionRoom.com. My Google Profile+
View all posts by Jason Liebig →
This entry was posted in 1970's, Chocolate, Nestle and tagged 1970's candy, 70's candy, candy collecting, candy collection, candy collector, candy wrapper collection, candy wrapper collector, collectible, collecting candy, confectionery, confections, DC Comics, Nestle, packaging, superheroes, Superman, sweets, vintage candy wrapper, wrapper. Bookmark the permalink.