The Sidekick and the Fast Break – A Dual-Identity Bar!

Though “the Sidekick and the Fast Break” may sound like the title of a 1980’s buddy film, it actually represents  the two names under which a single bar was launched just over a decade ago.

Back in 2002, Hershey of Canada launched the Sidekick bar, a delicious mixture of peanut butter, chocolate and nougat.  When I came across a wrapper for the brand recently I thought the bar’s description (and packaging illustration) seemed familiar – and I was right as it was the same bar as Reese’s Fast Break!

Further research revealed that both bars were launched in 2002 (some sources point to a 2001 launch for Fast Break but I could not confirm).  While Hershey gave the USA-distributed bar a Reese’s Fast Break moniker, Canada got the Hershey branding and the Sidekick title.

Here are the wrappers: 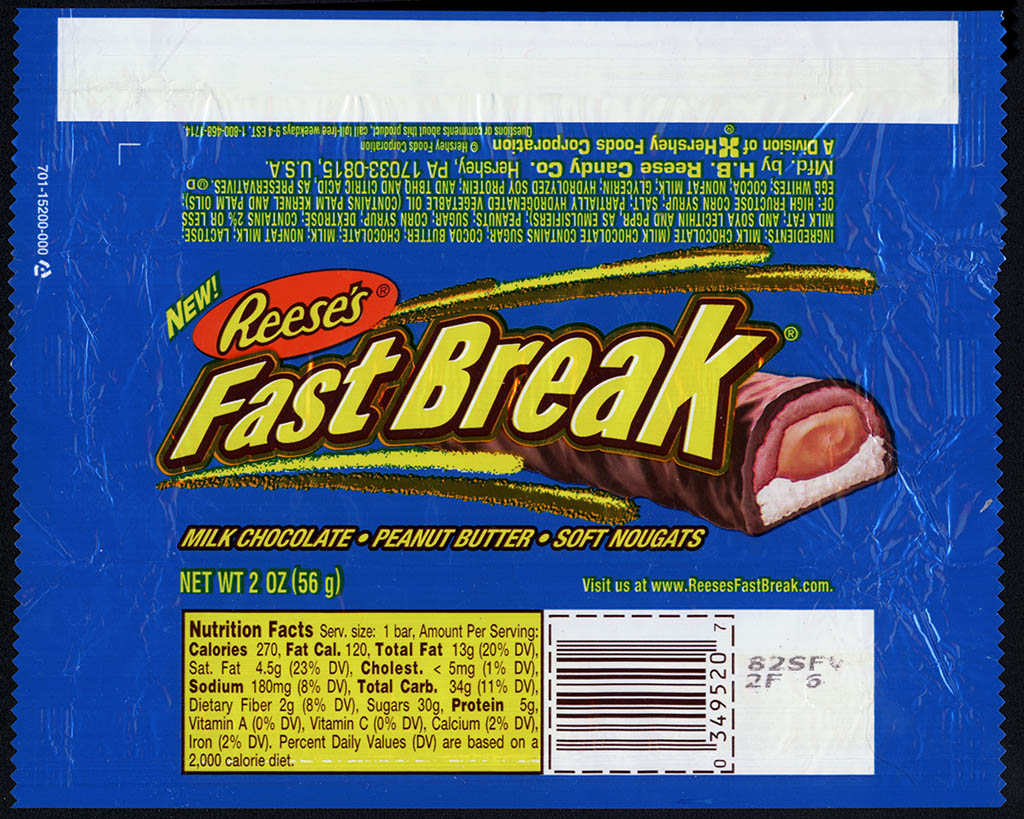 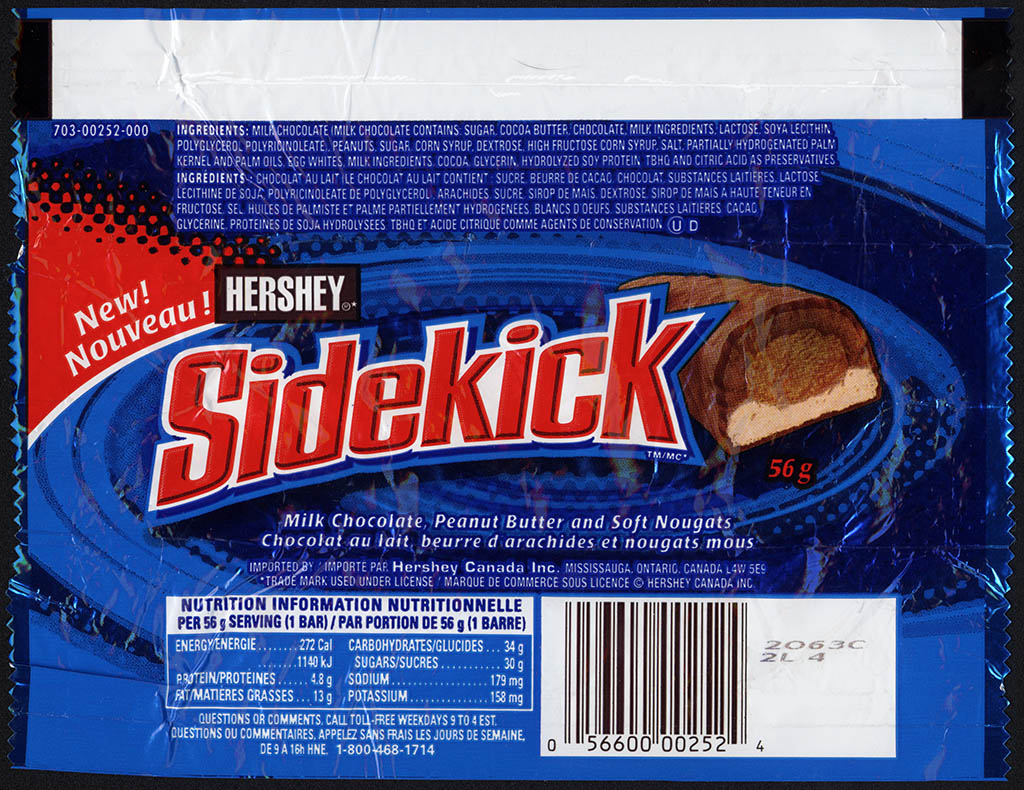 We can assume that differences in regional testing determined the alternative names for this offering.

Seeing both wrappers together reminded me of something I’ve long thought;  today we get fewer “completely new” designs and names for candy bars due to an abundance of franchise sub-branding.  That is to say that nowadays we have upwards of a dozen offerings under the Reese’s name, but in the past those twelve Reese’s sub-brands could have each had their own unique logo, name and packaging design.  The same is true for any number of other treats.  M&M’s Mint, for example, used to be Royals, and so on.

Perhaps if the Whatchamacallit bar were introduced today it would have been branded the Reese’s Peanut Crisp, rather than it’s actual title.  Though I can’t say for sure, it’s something interesting to consider.   This isn’t meant to imply a lack of creativity in the current confectionery world, but rather the strength that some of the larger franchise brands bring to the table these days.

I did find an image of a later variation of the Canadian Sidekick wrapper online and this one introduces an aspect of Reese’s branding into the design of it: 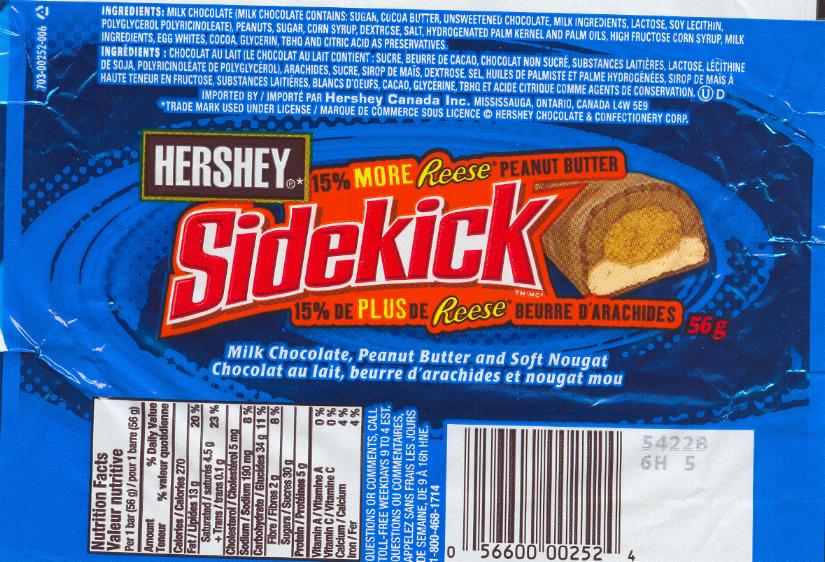 I think it’s pretty fascinating to see how the same candy product is marketed differently depending on which part of the world it is in, and today’s Sidekick/Fastbreak comparison is just one of many examples.

As of this writing, the Canadian Sidekick is no longer produced (it was discontinued in 2006) and the Reese’s Fast Break is not currently being distributed in Canada.  So perhaps the flavor combination just wasn’t a hit up north.  Of course the Reese’s Fast Break continues to be a mainstay here in the USA.  So perhaps that Reese’s branding helped keep it popular after all these years.

And that’s everything I’ve got to share on the Sidekick and the Fast Break.  But they’ll be back in “Sidekick and Fastbreak 2: Electric Boogaloo” next Spring!  😉

A New York City based writer, editor and sometimes actor. After spending much of the 1990′s in the comic book business helping tell the stories of Marvel Comics’ X-Men as series editor, he has since split his time between developing his own entertainment properties while still consulting and working on others. Having been described as “the Indiana Jones of lost and forgotten candy”, Jason is one of the country’s premier candy collectors and historians with his discoveries appearing in countless blogs, magazines, newspaper articles, and books. Always happy to share his knowledge and unique perspectives on this colorful part of our popular culture, Jason has consulted with New York’s Museum of Food and Drink and has also been a featured guest on Food Network’s Heavyweights, France’s M6 Capital, and New York’s TheActionRoom.com. My Google Profile+
View all posts by Jason Liebig →
This entry was posted in Canadian, Chocolate, Hershey, Peanut Butter and tagged Canada, Canadian, candy collecting, candy collection, candy collector, candy wrapper collection, candy wrapper collector, collectible, collecting candy, confectionery, confections, Hershey, packaging, peanut butter, Reese's, sweets, vintage candy wrapper, wrapper. Bookmark the permalink.

3 Responses to The Sidekick and the Fast Break – A Dual-Identity Bar!