A Mystery for Friday: Carvel’s (and Dugan’s) Absotively Nutty Bar!

Today I’ve got a fun wrapper to share that’s also a bit of a mystery.  It appears to have been a joint product from Carvel, the famous ice cream maker, and Dugan’s – a now-defunct bakery that was once one of the largest in the tri-state area.  Make the jump to see the full wrapper for the Absotively Nutty bar.

Though I have no memories of this bar personally, I find it a wonderfully-appealing piece.  The letters of the logo become the mascot in a light, illustrative way.  Here it is: 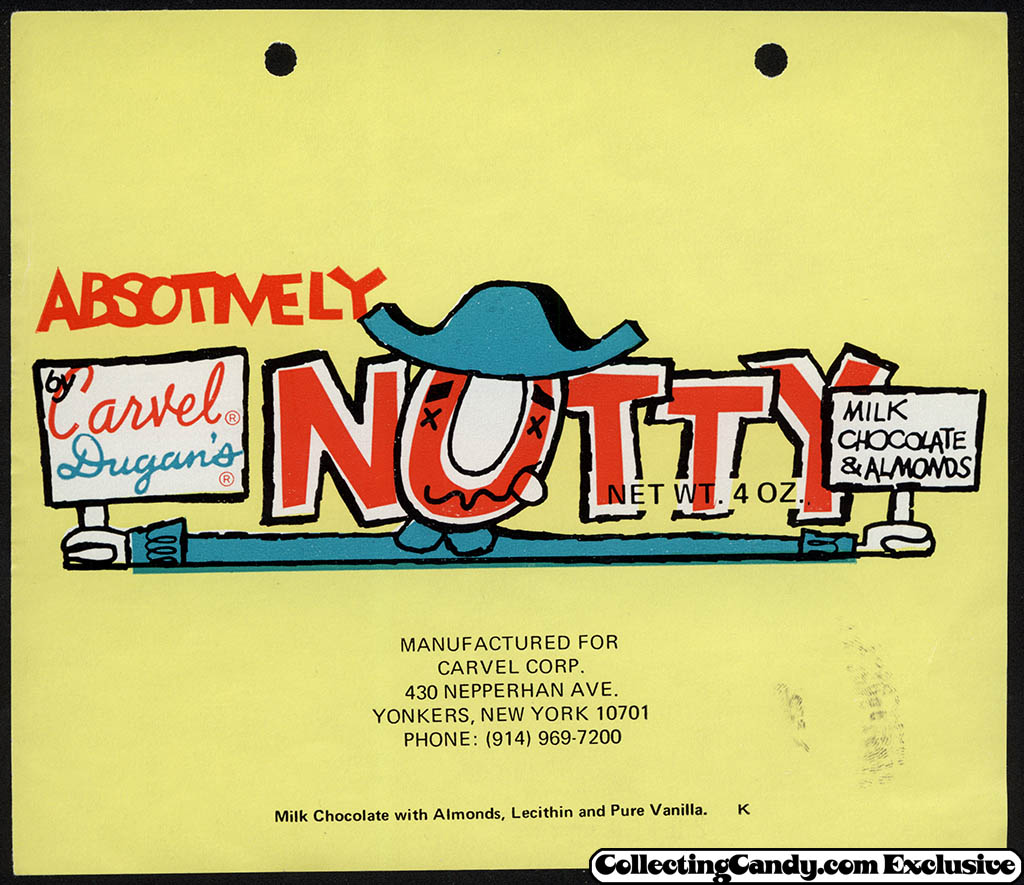 Carvel operated its own franchise shops, but they also distributed their branded product to other stores.  Dugan’s, on the other hand was more like a Hostess – they produced their own goods but distributed them only to existing grocery and mom-and-pop stores.

So, my guess is that Dugan’s and Carvel partnered to create the Absotively Nutty in order to draw upon the brand power and distribution of Carvel along with the manufacturing of Dugan’s as well as their own distribution network.  I’d also assume that this wasn’t the only collaborative effort between the two New York-based companies.

But that is all mere speculation.  With Dugan’s long out-of-business, and Carvel having changed corporate ownership twice since the 1970’s, we may never know for certain.  But at least we have this nifty wrapper to admire.

A New York City based writer, editor and sometimes actor. After spending much of the 1990′s in the comic book business helping tell the stories of Marvel Comics’ X-Men as series editor, he has since split his time between developing his own entertainment properties while still consulting and working on others. Having been described as “the Indiana Jones of lost and forgotten candy”, Jason is one of the country’s premier candy collectors and historians with his discoveries appearing in countless blogs, magazines, newspaper articles, and books. Always happy to share his knowledge and unique perspectives on this colorful part of our popular culture, Jason has consulted with New York’s Museum of Food and Drink and has also been a featured guest on Food Network’s Heavyweights, France’s M6 Capital, and New York’s TheActionRoom.com. My Google Profile+
View all posts by Jason Liebig →
This entry was posted in 1970's, Chocolate and tagged candy collecting, candy collection, candy collector, candy wrapper collection, candy wrapper collector, Carvel, collectible, collecting candy, confectionery, confections, Dugan's, Dugan's bakery, licensed, New York, packaging, sweets, vintage candy wrapper, wrapper. Bookmark the permalink.

1 Response to A Mystery for Friday: Carvel’s (and Dugan’s) Absotively Nutty Bar!