Today I’m jumping all the way back to 1972 and an offering from Beich’s [Say “Bikes”], a company best known for their seasonal offerings and of course their taffy.   Now let’s take a look at their distinctive Dipsy Doodle bar. 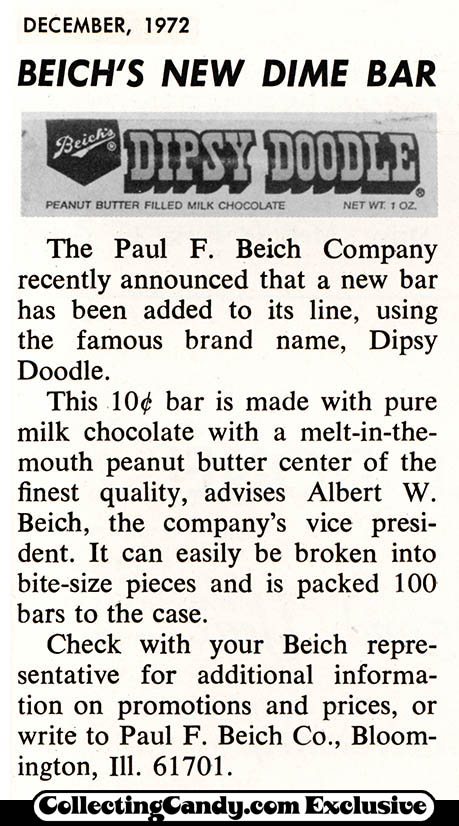 My guess is that the bar slowly rolled out to a national distribution, because in August of 1973 they were still referring to it as “new” in this trade ad: 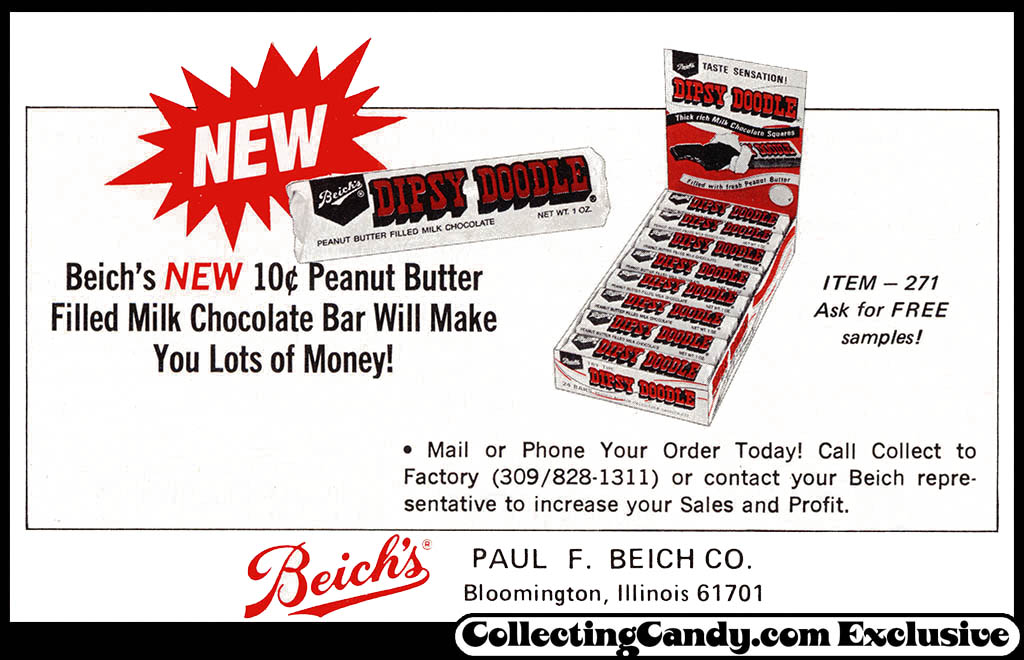 I have a fondness for any peanut-butter-and-chocolate confection, and I’ve always liked the name and graphic design of the Dipsy Doodle bar wrapper.  Because of that, it was on my “want list”, and just last month I was lucky enough to add a wrapper to my collection.  Here it is:

[As you can see, the three images above in today’s post are marked as CollectingCandy.com Exclusives – you won’t find them anywhere else online.]

I don’t believe that the Dipsy Doodle lasted too long for Beich’s as I could find no evidence of it being sold in later years.  So this one may have been discontinued by the mid-1970’s.  But there’s still a little more to the story…

Though the Dipsy Doodle was considered a new launch in 1972, it was a relaunch of sorts for Beich’s, at least for the brand name.   During the 1930’s-1960’s period, Beich’s sold a different kind of Dipsy Doodle bar – a pecan/cashew/peanut nut roll.  Friend and fellow collector Richard Saunders over at CandyWrapperArchive.com has a cellophane wrapper example in his collection for this earlier incarnation of Beich’s Dipsy Doodle:

And that’s everything for today’s coverage of the distinctive Dipsy Doodle bar from 1972.

A New York City based writer, editor and sometimes actor. After spending much of the 1990′s in the comic book business helping tell the stories of Marvel Comics’ X-Men as series editor, he has since split his time between developing his own entertainment properties while still consulting and working on others. Having been described as “the Indiana Jones of lost and forgotten candy”, Jason is one of the country’s premier candy collectors and historians with his discoveries appearing in countless blogs, magazines, newspaper articles, and books. Always happy to share his knowledge and unique perspectives on this colorful part of our popular culture, Jason has consulted with New York’s Museum of Food and Drink and has also been a featured guest on Food Network’s Heavyweights, France’s M6 Capital, and New York’s TheActionRoom.com. My Google Profile+
View all posts by Jason Liebig →
This entry was posted in 1970's, Chocolate, Peanut Butter and tagged 1970's candy, 1970's wrapper, Beich's, Bikes, candy collecting, candy collection, candy collector, candy wrapper collection, candy wrapper collector, chocolate, collectible, collecting candy, confectionery, confections, packaging, peanut butter, sweets, vintage candy wrapper, wrapper. Bookmark the permalink.