In the wake of the huge success that was Nerds, the Willy Wonka company attempted a number of similar follow-ups.  One such treat was Willy Wonka’s Rinky Dinks, tiny jawbreakers with printed faces served up in a three-flavor, compartmentalized box.

First launched in 1984, the Rinky Dinks items I have in my collection and which I’ll be sharing today are from the 1986 Match & Win promotion.

First up is a Rinky Dinks Match & Win candy box: 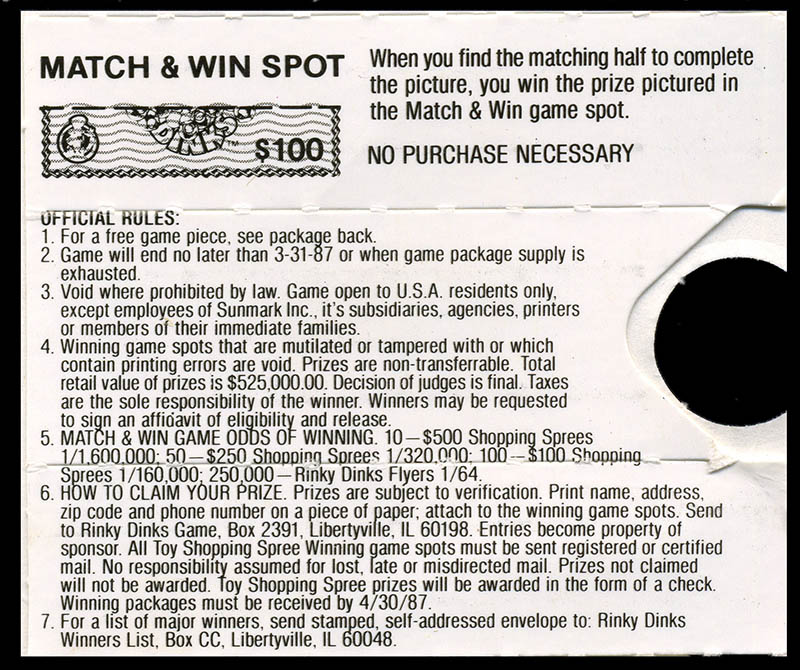 As you can see, the three separate box tabs allowed you to choose which flavor of Rinky Dinks you were accessing.  That packaging feature was a big part of what set Nerds apart from the competition, and it was something that Willy Wonka Brands utilized to bring some of that Nerds success to this product.

The one thing that I really dig about Rinky Dinks is something I didn’t even realize for a number of years, which is that each little jawbreaker had a cartoon face printed on it.  I’ve had that Rinky Dinks box for some time, and even though it says right on it “candy with faces” I just thought that it was the typical Wonka mascot illustration reference, not the candy itself.  So when I found this next item, a newspaper circular for Rinky Dinks, I realized it was a literal description.  [I’m happy to say that these next two images are CollectingCandy.com Exclusives – you won’t find them anywhere else online.]

As you can see from this ad, there were two different flavor assortment for Rinky Dinks, though I only have one in my own collection  – something fun to hunt for!

Here’s a close-up of some of the Rinky Dinks candy-with-faces from the ad:

And that’s everything for today’s fun Friday post.  I hope you’ve enjoyed this glimpse back at the candy-with-faces, Willy Wonka’s Rinky Dinks!

A New York City based writer, editor and sometimes actor. After spending much of the 1990′s in the comic book business helping tell the stories of Marvel Comics’ X-Men as series editor, he has since split his time between developing his own entertainment properties while still consulting and working on others. Having been described as “the Indiana Jones of lost and forgotten candy”, Jason is one of the country’s premier candy collectors and historians with his discoveries appearing in countless blogs, magazines, newspaper articles, and books. Always happy to share his knowledge and unique perspectives on this colorful part of our popular culture, Jason has consulted with New York’s Museum of Food and Drink and has also been a featured guest on Food Network’s Heavyweights, France’s M6 Capital, and New York’s TheActionRoom.com. My Google Profile+
View all posts by Jason Liebig →
This entry was posted in 1980's, Nestle, Wonka and tagged 1980's candy, 80's candy, candy collecting, candy collection, candy collector, candy wrapper collection, candy wrapper collector, collectible, collecting candy, confectionery, confections, packaging, Rinky Dinks, sweets, vintage candy wrapper, Willy Wonka brands, Wonka mascot, wrapper. Bookmark the permalink.

3 Responses to A Fun One For Friday – Willy Wonka’s Rinky Dinks from 1986!