When Snickers got Charged! (with caffeine)

Since the explosion in popularity of energy drinks, manufacturers have sought to market all kinds of caffeinated food, even infusing it into candy and chocolate bars.  I’ll certainly admit that there have been times in my own life that I’ve called upon a Red Bull when I felt I needed some extra alertness in my day or evening.   It seems that in 2013 that we have become a society that is more caffeinated than ever.

So it was that in 2007 the Mars company thought they’d give one of their most iconic brands an extra shot of go-power with the caffeinated Snickers Charged!

I never sampled a Snickers Charged during their limited edition run, so I can’t really speak to what they tasted like (though my friend Cybele over at Candyblog.net does a very nice write-up of her experience with them where you can see what the bar itself looked like).    What appeals to me about Snickers Charged is the graphic design of the wrapper, which I always thought was pretty cool.

Though Snickers Charged was a “limited edition” and has only been released once, there were actually two distinct wrappers produced for it, as the early sample bars featured a different design from the one that shipped to retailers.  These sample bars were handed out at spots like the Candy and Snacks Expo in 2007 and likely other spots as well.  Let’s take a look: 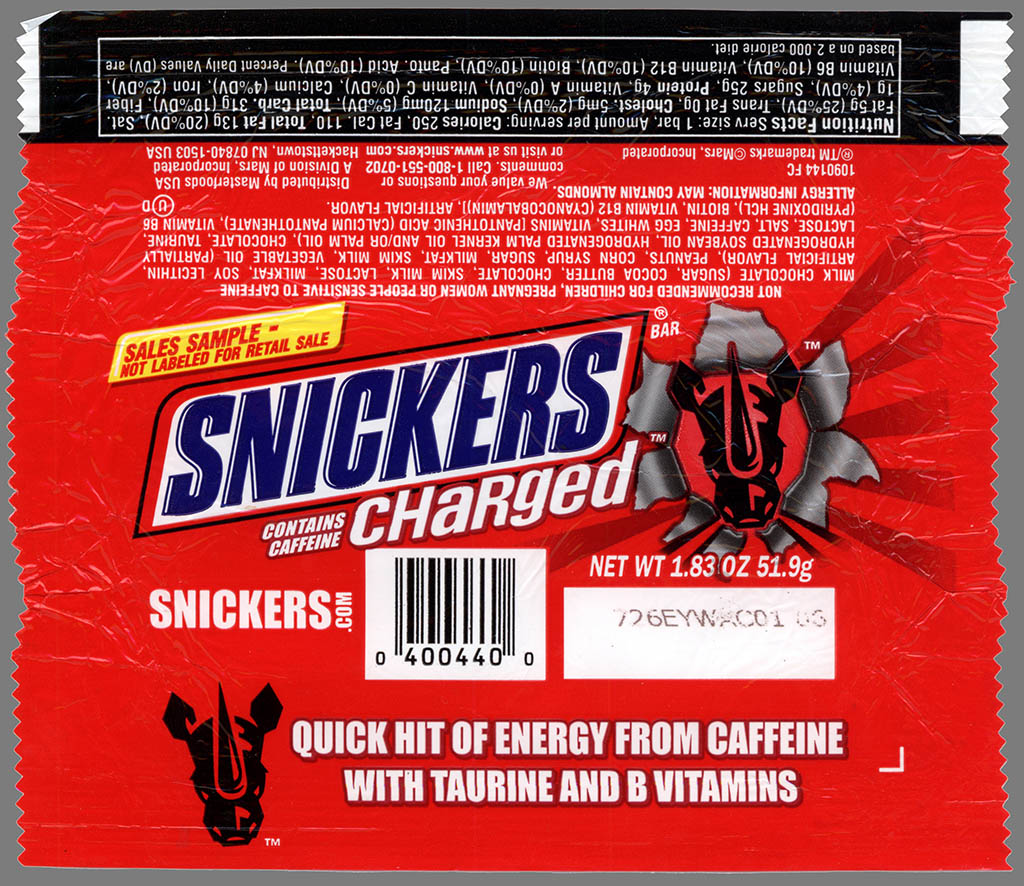 The production wrapper that followed would retain the powerful Rhinoceros graphic, though most of the rest of the design changed.

Here’s what the Snickers Charged wrapper looked like when it was found on store shelves: 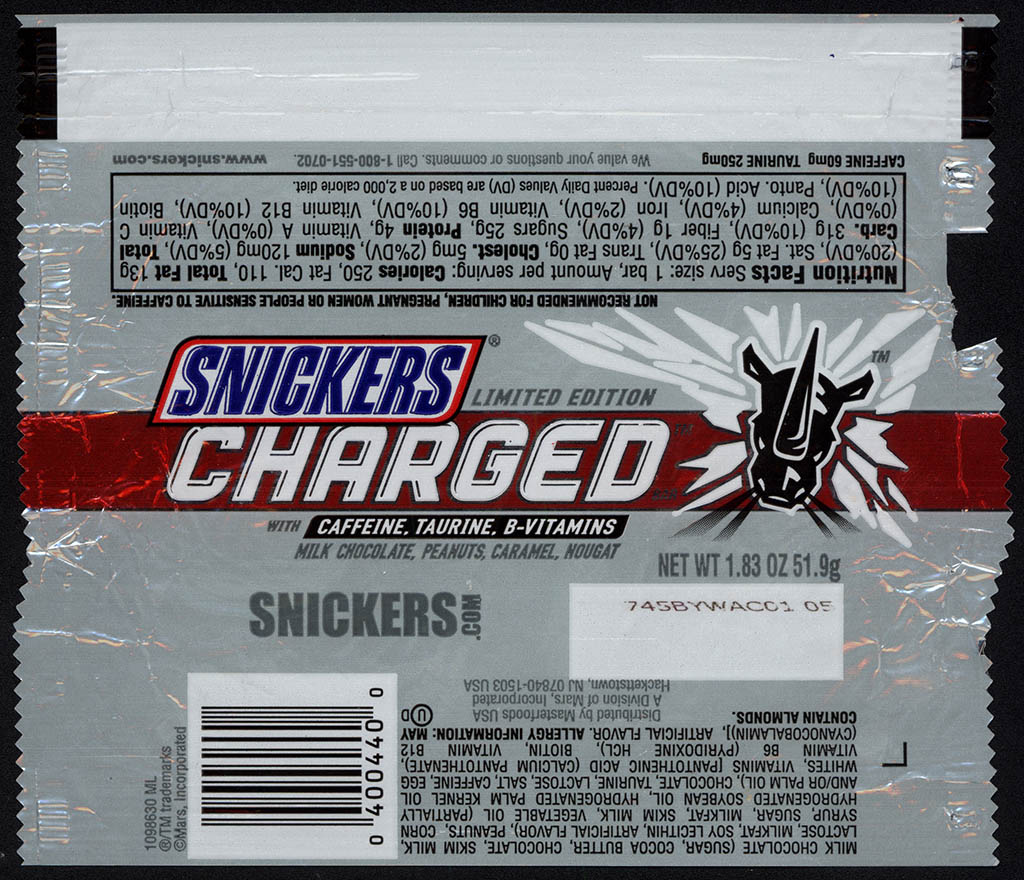 The production wrapper returned the primary Snickers logo to a straight horizontal orientation and introduced a reflective foil aspect to the design.  I’m a fan of both of these wrappers and am glad that I have both in my collection, though that first red wrapper might be my favorite of the two.

From what I can tell, Snickers Charged had a brief limited run but it wasn’t enough of a sales success to warrant a return engagement, and it is now a fun piece of confectionery history.

Snickers Charged hasn’t been the only attempt by a mainstream candy company to bring caffeine to their offerings and I hope to cover a broader range of caffeinated candy soon.  But this is everything for today.

A New York City based writer, editor and sometimes actor. After spending much of the 1990′s in the comic book business helping tell the stories of Marvel Comics’ X-Men as series editor, he has since split his time between developing his own entertainment properties while still consulting and working on others. Having been described as “the Indiana Jones of lost and forgotten candy”, Jason is one of the country’s premier candy collectors and historians with his discoveries appearing in countless blogs, magazines, newspaper articles, and books. Always happy to share his knowledge and unique perspectives on this colorful part of our popular culture, Jason has consulted with New York’s Museum of Food and Drink and has also been a featured guest on Food Network’s Heavyweights, France’s M6 Capital, and New York’s TheActionRoom.com. My Google Profile+
View all posts by Jason Liebig →
This entry was posted in Chocolate, Mars, Uncategorized and tagged caffeinated, caffeine, candy collecting, candy collection, candy collector, candy wrapper collection, candy wrapper collector, collectible, collecting candy, confectionery, confections, Mars, packaging, Snickers, sweets, vintage candy wrapper, wrapper. Bookmark the permalink.

1 Response to When Snickers got Charged! (with caffeine)