Pablo Picasso had his “Blue Period” and Burt Convy’s Tatletales game show had its Banana Section, so perhaps it was destiny that the Tootise company would one day have a “Banana Period” of their own.

If that last sentence is a bit of gibberish to you, I apologize, but this all to bring a little color and attention to a time when the Tootsie company endeavored bring the banana flavor to the forefront with a pair of fun confectionery offerings.

I first uncovered evidence of what I’m calling Tootsie’s “Banana Period” about three years ago, when I came across a wrapper for Banana Peels.  Banana Peels seems to have been a banana-flavored confection served up in a similar Tootsie Roll shape and package.   That initial wrapper I found had been trimmed down for someone’s banana-themed scrapbook, but it still included a trio of banana mascots : 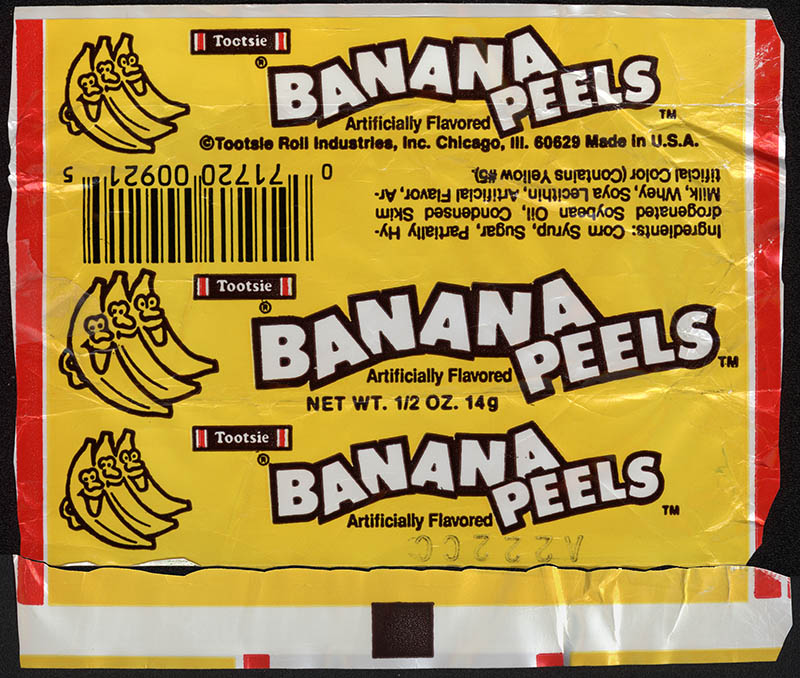 I recently found an intact Banana Peels wrapper which is nearly identical to the trimmed version, though it does sport some subtle differences: 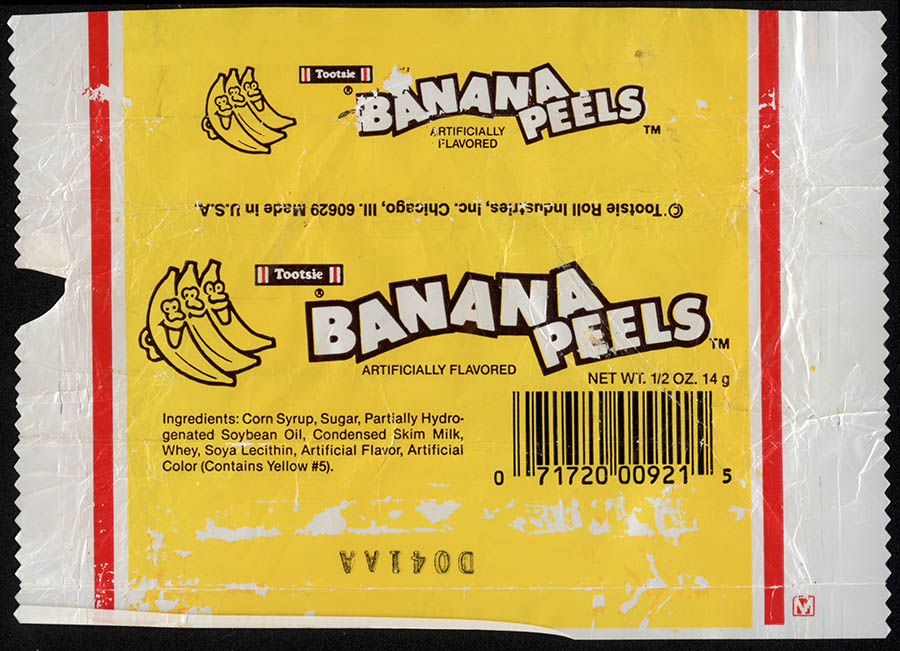 As with the standard Tootsie Roll packaging, these sport a bright red stripe on both ends of the wrapper, which makes me suspect that Banana Peels really was essentially a banana Tootsie Roll.

[Editor’s Note:  Tootsie still makes fruit-flavored Tootsie Roll type confections.  They have both Tootsie Fruit Rolls and Tootsie Frooties in various fruit flavors.   Though they don’t have a dedicated banana flavor, for a time they did offer a Banana-Berry Tootsie Frooties – though that flavor appears to now be discontinued.]

For a long time I had assumed that Banana Peels was a one-off, but then I came across a wrapper for another banana-themed Tootsie product.   This one was for a Tootsie Banana Pop, and it shared the banana logo typeface that I’d previously found on the Banana Peels wrapper.  Also like Banana Peels, this one includes a couple of fun-loving banana mascots: 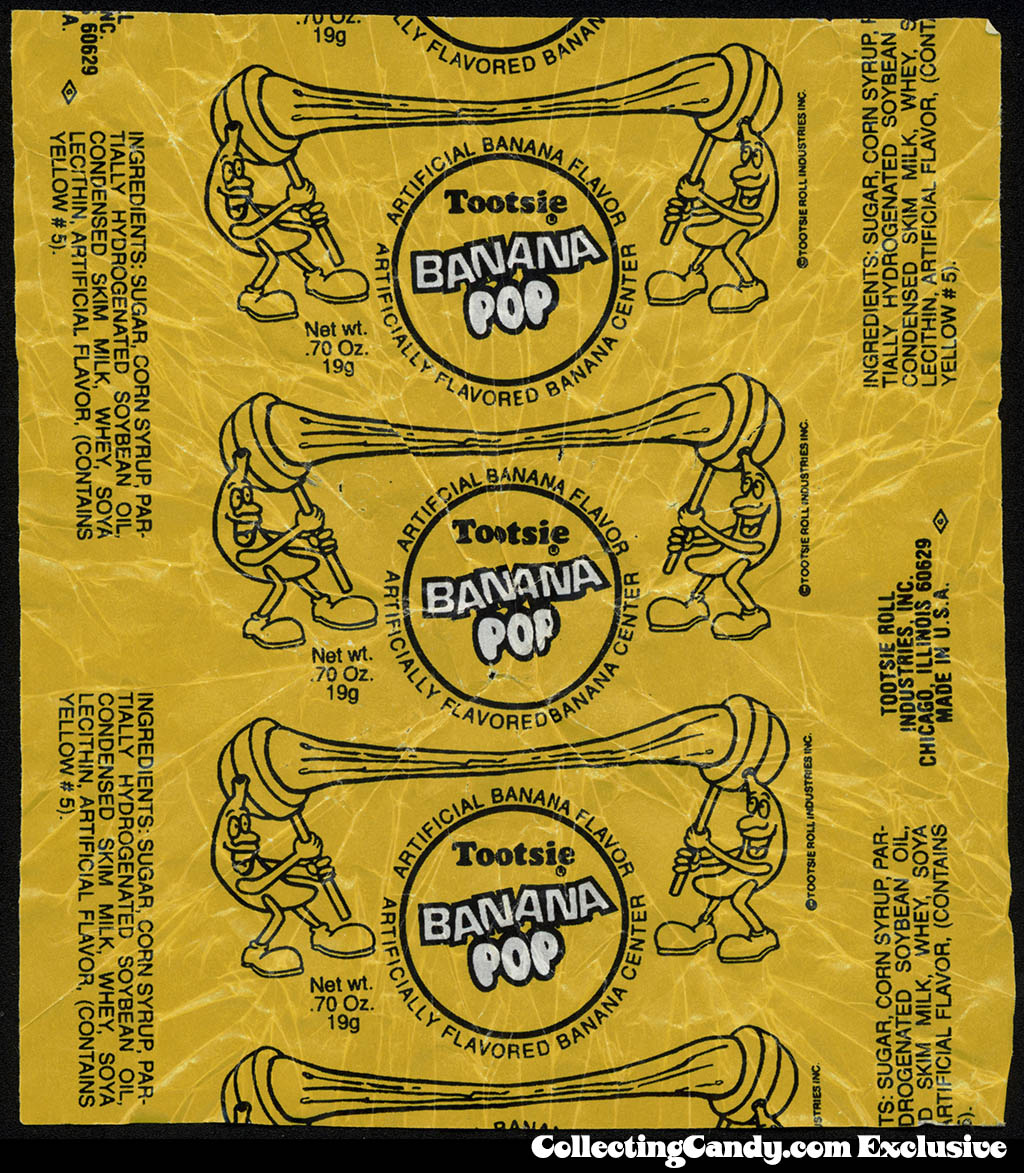 Banana is currently one of the special rotating Tootsie Pop flavors, so you can find them from time-to-time included along with the standard Tootie Pop assortment.  For comparison here is a current Tootsie Pop Banana wrapper: 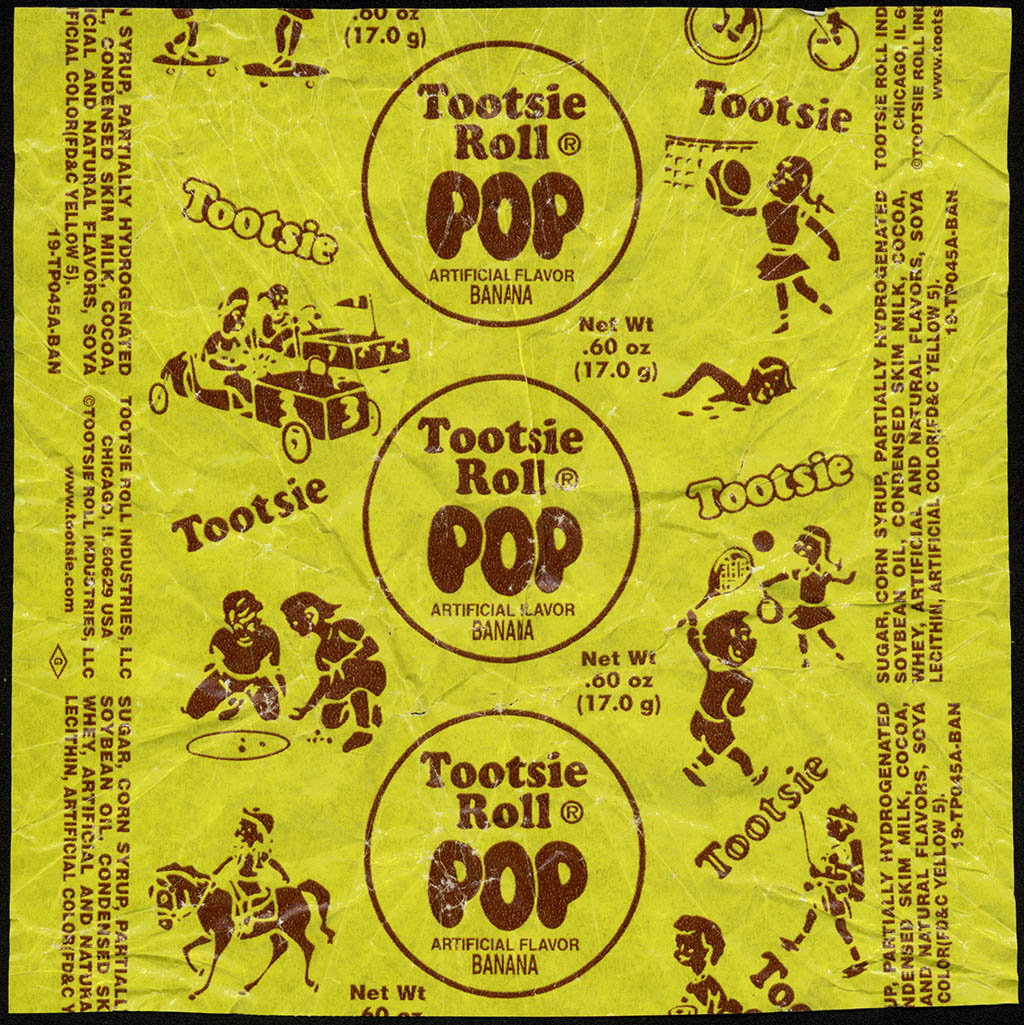 I’ve sampled and enjoyed a number of banana-flavored Tootsie Pops in recent years, but finding this Tootsie Banana Pop wrapper does make me wonder just how a through-and-through Tootsie Banana Pop might be.   Who knows, maybe Tootsie will bring something like this back to market again someday.  We can hope.

I don’t know exactly how long Tootsie’s Banana Period lasted but it was probably no more than a couple of years.  It’s also possible that there were other banana-flavored Tootsie creations that came from this period, but so far these are the only two I’ve found.

And that’s everything for today’s banana-rific post.  I hope you’ve enjoyed learning about Tootsie’s “Banana Period”.

A New York City based writer, editor and sometimes actor. After spending much of the 1990′s in the comic book business helping tell the stories of Marvel Comics’ X-Men as series editor, he has since split his time between developing his own entertainment properties while still consulting and working on others. Having been described as “the Indiana Jones of lost and forgotten candy”, Jason is one of the country’s premier candy collectors and historians with his discoveries appearing in countless blogs, magazines, newspaper articles, and books. Always happy to share his knowledge and unique perspectives on this colorful part of our popular culture, Jason has consulted with New York’s Museum of Food and Drink and has also been a featured guest on Food Network’s Heavyweights, France’s M6 Capital, and New York’s TheActionRoom.com. My Google Profile+
View all posts by Jason Liebig →
This entry was posted in 1980's, 1990's and tagged 80's candy, 90's candy, banana, banana mascots, candy collecting, candy collection, candy collector, candy wrapper collection, candy wrapper collector, collectible, collecting candy, confectionery, confections, mascots, packaging, sweets, Tootsie, Tootsie Roll, vintage candy wrapper, wrapper. Bookmark the permalink.

1 Response to Bananas for Tootsie!