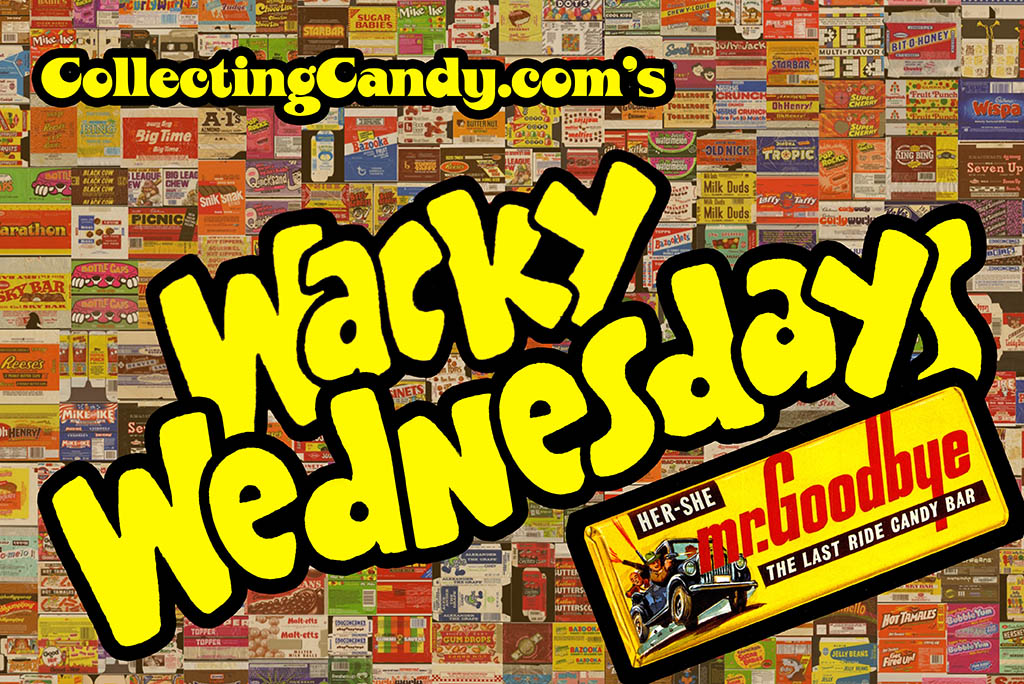 Hello everyone and welcome to our Thanksgiving-Eve edition of Wacky Wednesdays.  Today we will be looking at a sticker from 1974’s Wacky Packages Series 7 — Mr. Goodbye.

Based on Hershey’s Mr. Goodbar, the Mr. Goodbye parody isn’t as on-the-nose as others I’ve covered in the past.  Mr. Goodbye establishes the mobster thematic by playing on the name, but mainly by the inclusion of the characters in the car, which solidifies it.  Here’s a closer look: 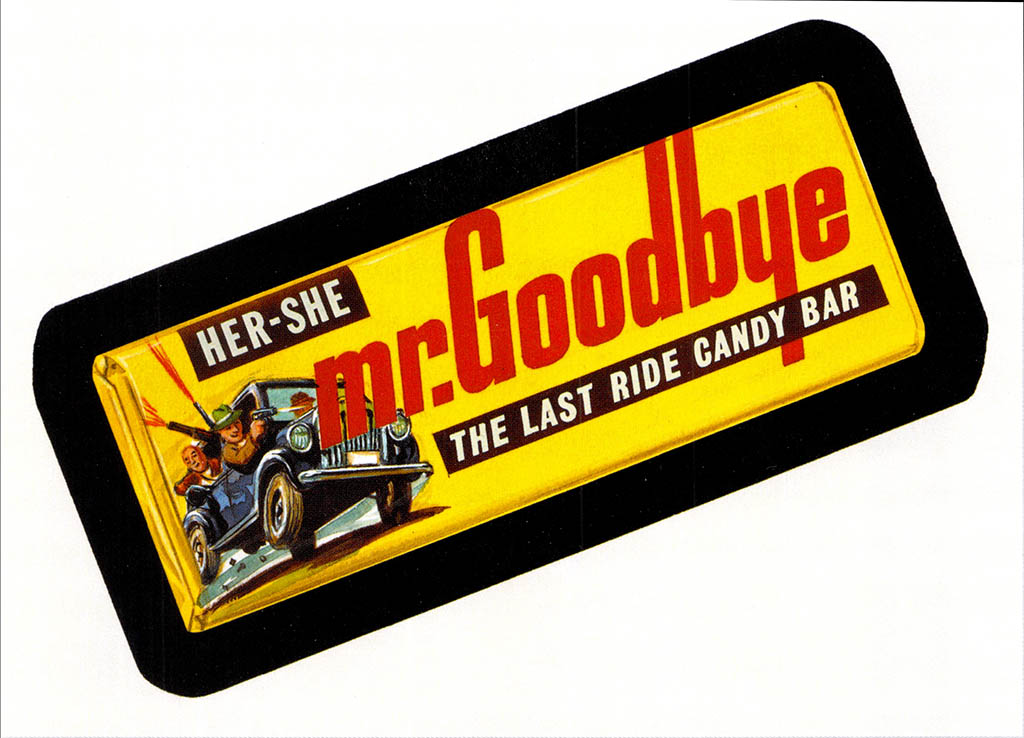 I’m not quite sure what the “Her-She” take on the Hershey name is, but the “Last Ride Candy Bar” jibes well with the mobsters-in-car imagery added to the wrapper.   It may not be the clearest Wacky I’ve come across in terms of parody, but I still like it.

Here’s a late 70’s Mr. Goodbar wrapper from my collection that matches up pretty well with the version parodied for Mr. Goodbye.

So that’s everything I’ve got to share for today’s edition of Wacky Wednesdays.

I want to let everyone know that while updates have been a bit irregular the last two weeks, it’s been for good reason.  I’ve been working the to get a bunch of my backlog scanned, so that I can take it with me to use while I’m traveling for the holidays.   The work I’ve been doing should allow for regular updating even while I’m away from my archives.

I will have a fun post up for tomorrow’s Thanksgiving holiday.  I hope everyone spends a great day with family and loved ones and gets lots of good food.

A New York City based writer, editor and sometimes actor. After spending much of the 1990′s in the comic book business helping tell the stories of Marvel Comics’ X-Men as series editor, he has since split his time between developing his own entertainment properties while still consulting and working on others. Having been described as “the Indiana Jones of lost and forgotten candy”, Jason is one of the country’s premier candy collectors and historians with his discoveries appearing in countless blogs, magazines, newspaper articles, and books. Always happy to share his knowledge and unique perspectives on this colorful part of our popular culture, Jason has consulted with New York’s Museum of Food and Drink and has also been a featured guest on Food Network’s Heavyweights, France’s M6 Capital, and New York’s TheActionRoom.com. My Google Profile+
View all posts by Jason Liebig →
This entry was posted in 1970's, Hershey, Topps, Wacky Packages and tagged 1970's chocolate, candy collecting, candy collection, candy collector, candy wrapper collection, candy wrapper collector, collectible, collecting candy, confectionery, confections, Hershey candy, package parody, packaging, sweets, Topps candy, vintage candy wrapper, Wacky Packages, Wacky Packs, wrapper. Bookmark the permalink.