Monster candy boxes; they’ve been around for what seems like forever, and because of that they’ve become a sort of candy mystery-in-plain-sight.

Monster Candy were (are) produced by World Candies out of Brooklyn, New York.  World Candies are a novelty candy manufacturer and one of the few still operating out of the Brooklyn area.  Historically, Brooklyn was a hotbed of candy and gum manufacturing with Topps being there, Phoenix (Now & Later) and many more, over the decades. World Candies produces some of the few modern candy cigarettes (now called candy sticks) you can still buy and that’s just what you’d find inside of box of Monster candy – a few candy sticks.

In trying to track down the origins of these, I’ve become a bit befuddled, because as far as I can tell, these have been sold in the exact same boxes since at least as early as the 1970’s.  They might even still be sold by World Candies today – I’ve found online sellers who appear to have new stock of them.  Which is weird.  But such is the way with candy.

For now, I don’t have any more definitive answers, but I can at least share the set of boxes I have collected with you.  So let’s get to it: 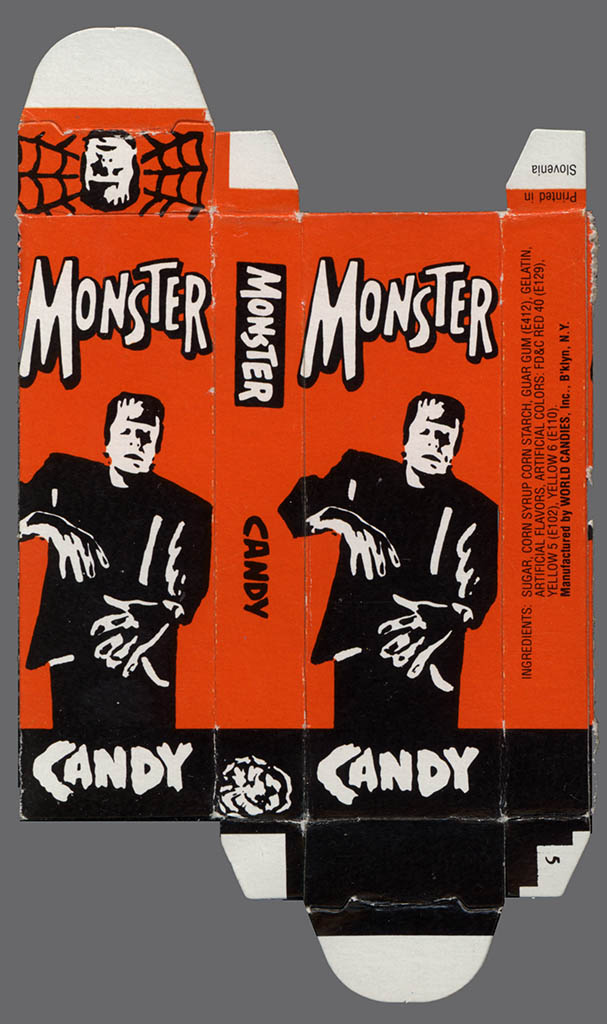 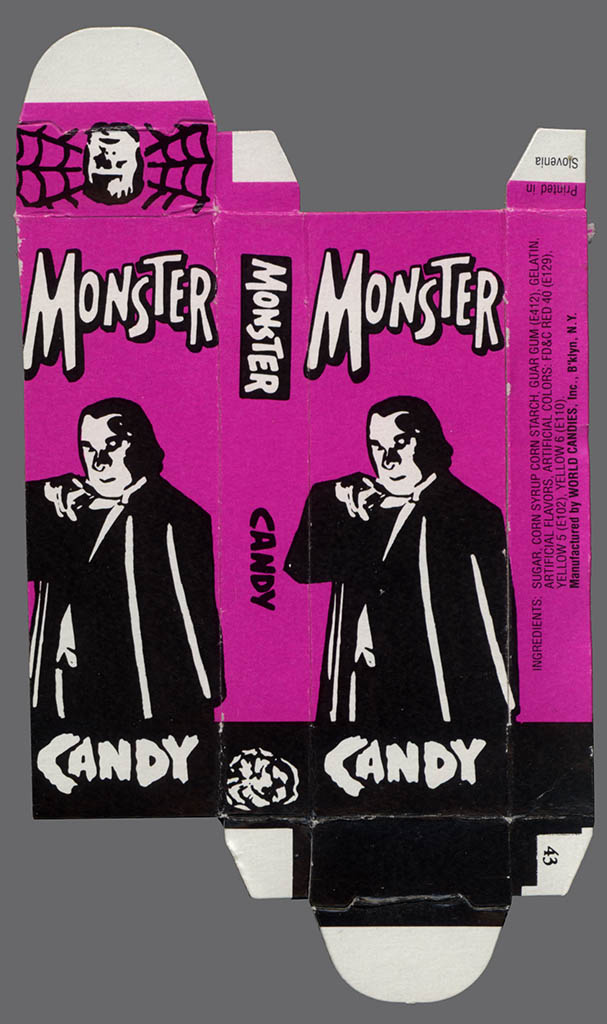 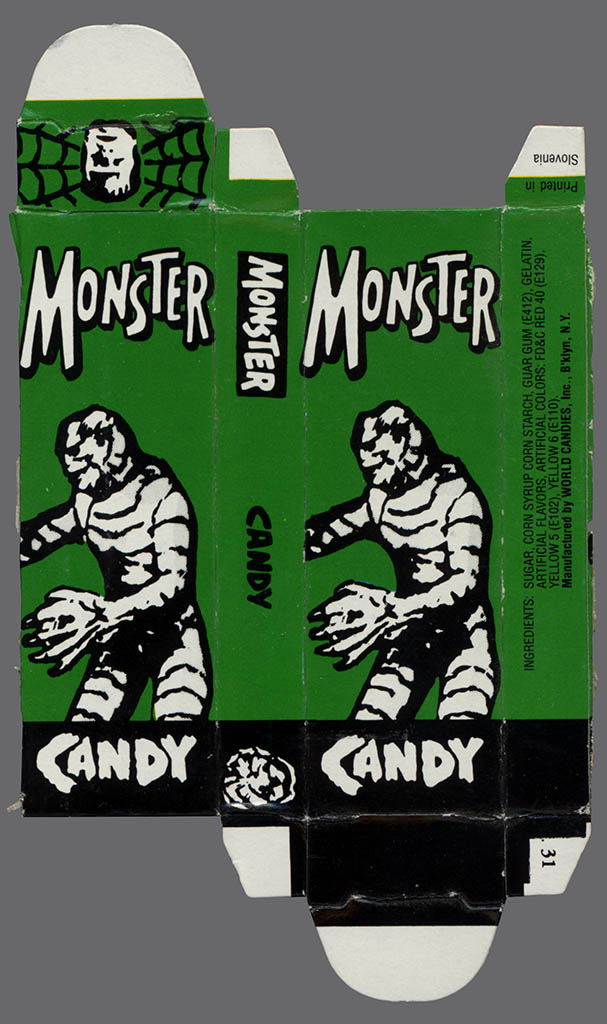 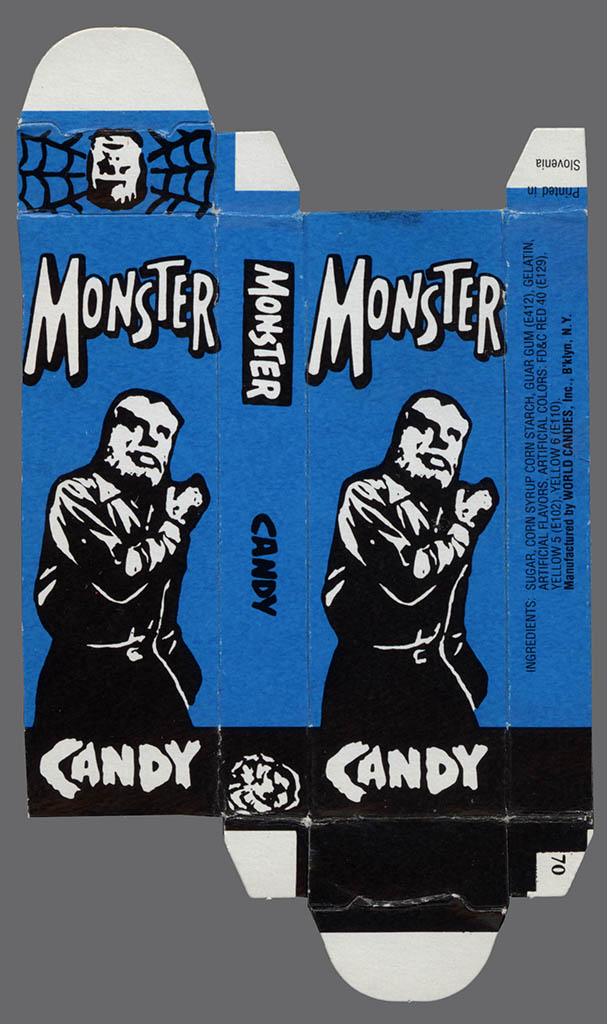 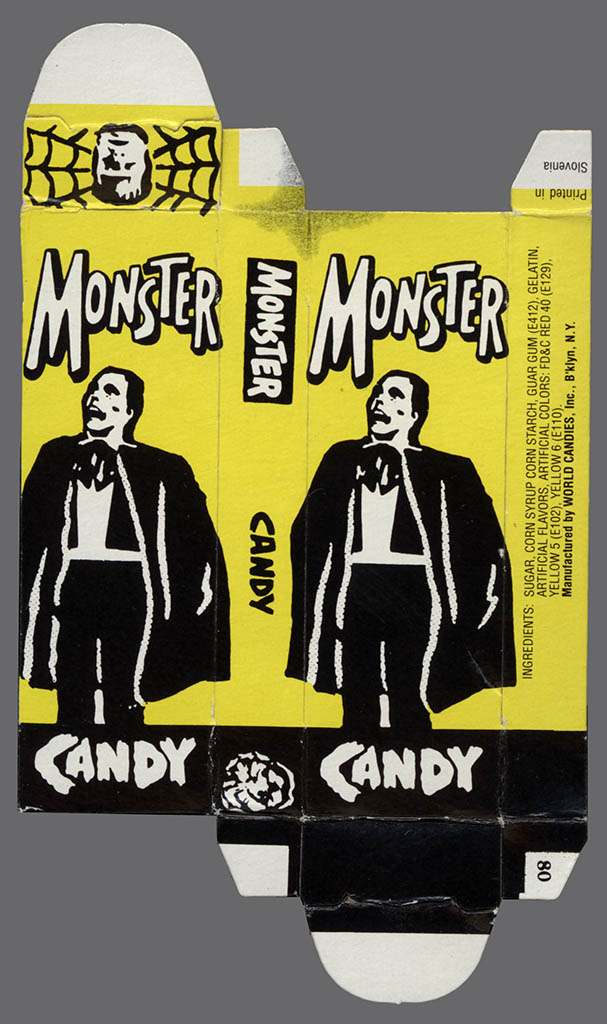 Looking closer at the boxes now, I wonder if my examples aren’t from the 1970’s at all, but a bit later.  I dated them based on the other pieces I found them with, but that might not be accurate.  For now there is no way to be sure.

So that’s it, and everything I’ve got on World Candies Monster candy boxes.  See you next time!

A New York City based writer, editor and sometimes actor. After spending much of the 1990′s in the comic book business helping tell the stories of Marvel Comics’ X-Men as series editor, he has since split his time between developing his own entertainment properties while still consulting and working on others. Having been described as “the Indiana Jones of lost and forgotten candy”, Jason is one of the country’s premier candy collectors and historians with his discoveries appearing in countless blogs, magazines, newspaper articles, and books. Always happy to share his knowledge and unique perspectives on this colorful part of our popular culture, Jason has consulted with New York’s Museum of Food and Drink and has also been a featured guest on Food Network’s Heavyweights, France’s M6 Capital, and New York’s TheActionRoom.com. My Google Profile+
View all posts by Jason Liebig →
This entry was posted in 1970's, CountdownToHalloween, Halloween, Holiday, Novelty and tagged candy collecting, candy collection, candy collector, candy wrapper collection, candy wrapper collector, collectible, collecting candy, confectionery, confections, Halloween, Halloween candy, monster candy, packaging, sweets, vintage candy wrapper, wrapper. Bookmark the permalink.

Leave a Reply to A fan Cancel reply