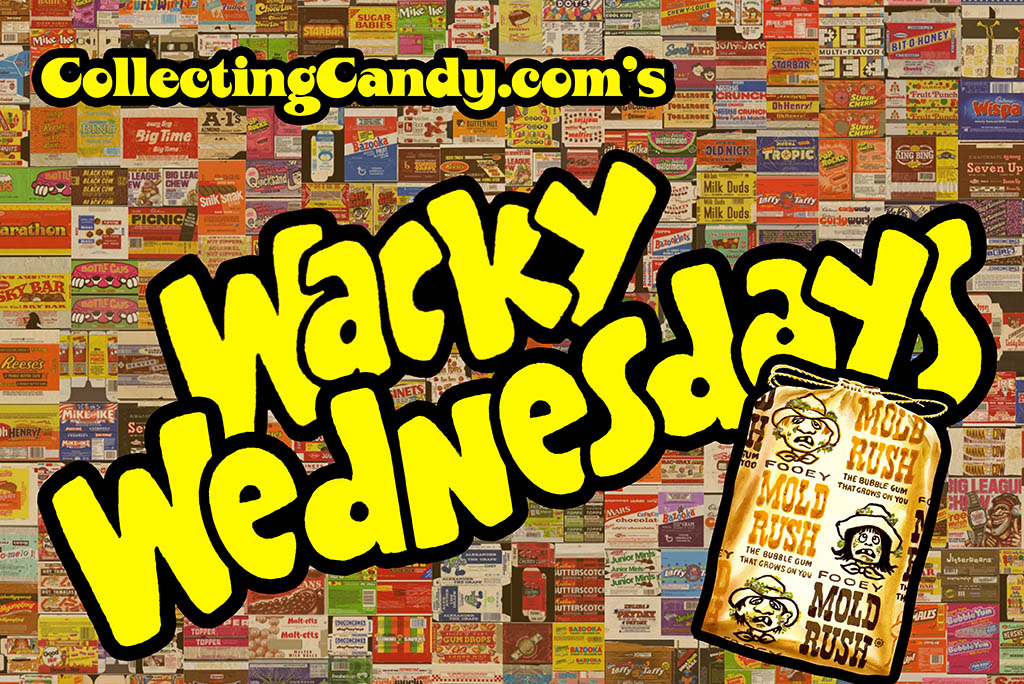 It’s the middle of the week, so it’s time for another edition of CollectingCandy.com’s Wacky Wednesdays!  For today’s post, we’re going to look at one of my favorite Wacky Package stickers.  It’s from 1974’s Wacky Packages series 6:  Mold Rush.

Mold Rush is based on one of Topps’ own products, Gold Rush bubble gum.  Topps made it a regular occurrence to parody their own products and those parodies were always the ones chosen as the subject of the puzzles that you could build from the checklist backs.

I suspect parodying their own products was an effort to show that Wackys were never meant to harm the original brand’s image, so much as it was to have fun with it.

Here’s a look at the original sticker: 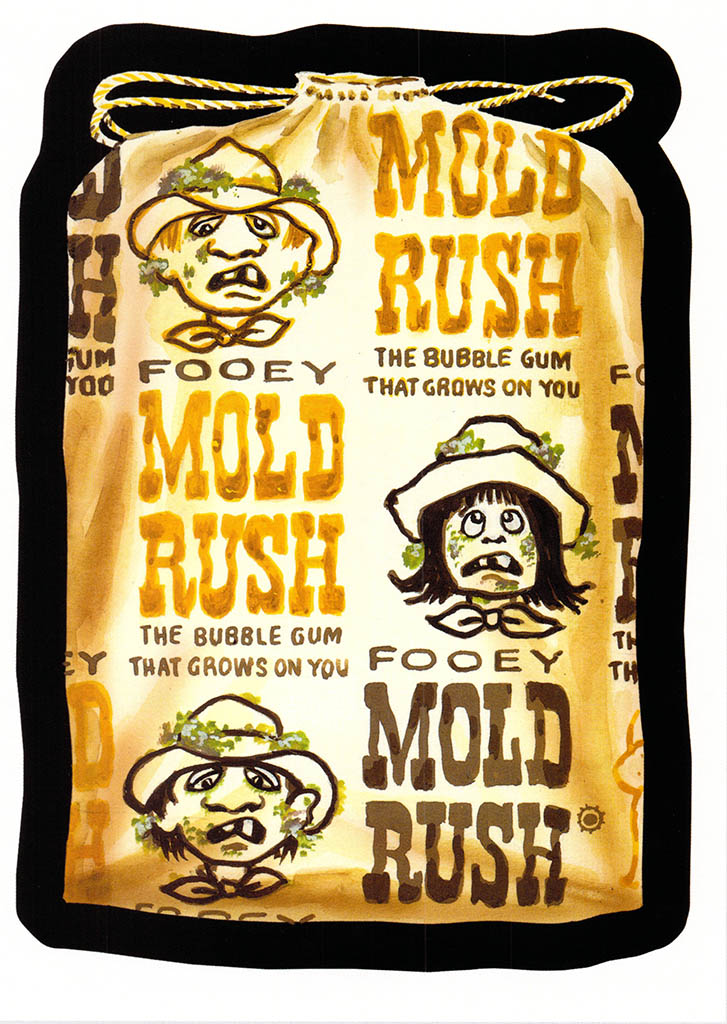 And here’s a scan of the exact style of Gold Rush pack that was parodied: 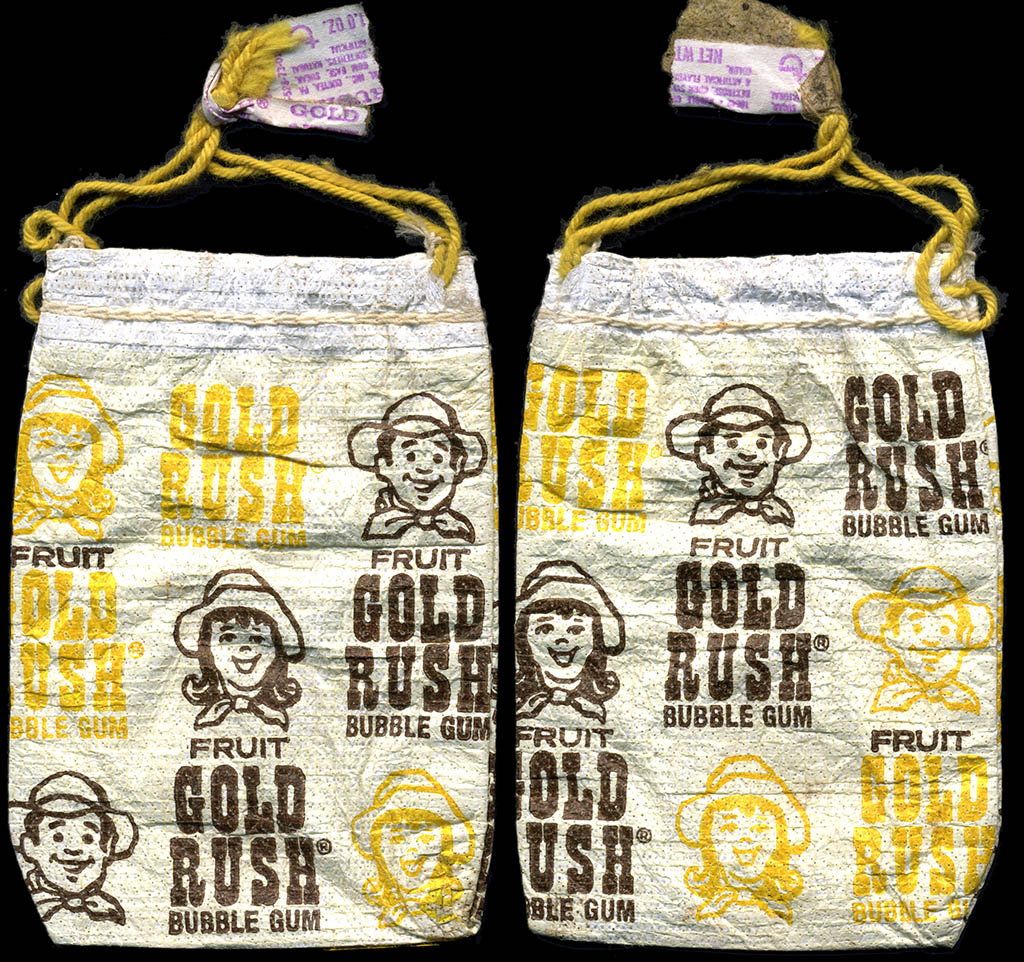 As you can see, the original package was adorned with line-art illustrations.  I’ve always thought that line-art presented a challenge for the Wacky artists, as they did so much cool stuff with rendered mascots, but they still came up with a nice approach to their parody.  I love the look of the beaten down and trodden Mold Rush mascots, especially when compared to the happy, fresh-faced originals.

I should mention that Gold Rush gum has a pretty rich history on its own, and is a topic I look forward to exploring in a future CollectingCandy.com post.

For today however, this wraps up our Wacky Wednesdays look at Mold Rush.

A New York City based writer, editor and sometimes actor. After spending much of the 1990′s in the comic book business helping tell the stories of Marvel Comics’ X-Men as series editor, he has since split his time between developing his own entertainment properties while still consulting and working on others. Having been described as “the Indiana Jones of lost and forgotten candy”, Jason is one of the country’s premier candy collectors and historians with his discoveries appearing in countless blogs, magazines, newspaper articles, and books. Always happy to share his knowledge and unique perspectives on this colorful part of our popular culture, Jason has consulted with New York’s Museum of Food and Drink and has also been a featured guest on Food Network’s Heavyweights, France’s M6 Capital, and New York’s TheActionRoom.com. My Google Profile+
View all posts by Jason Liebig →
This entry was posted in 1970's, Bubble Gum, Gum, Topps, Wacky Packages and tagged 1970's, 1970's gum, 70's, 70's gum, candy collecting, candy collection, candy collector, candy wrapper collection, candy wrapper collector, collectible, collecting candy, confectionery, confections, packaging, sweets, Topps, Topps gum, vintage candy wrapper, Wacky Packages, Wacky Packages stickers, Wacky Packs, wrapper. Bookmark the permalink.