A Big League Pair and Six Months of CollectingCandy!

Today I want to share my latest Big League Chew-related discovery, and it seems only appropriate that I do so while also marking the six-month anniversary of CollectingCandy.com’s launch.

I launched CollectingCandy.com earlier this year, on February 6th, with a retrospective on Big League Chew bubble gum.  I set out to put my best foot forward with my launch piece for the site, and the Big League article accomplished the task.   The response was great and it encouraged to me go forward with the same approach I brought to the launch.

When I conceived of how I wanted the site to evolve and grow, I committed to posting something new every day.  Six months later, I’ve published just over 160 posts.   The quick math reveals that I’ve missed a few days along the way, but I’ve also learned a lot about daily editorial production.   I’ve always marveled at the commitment required to publish a daily newspaper, and now so more than ever.

I have a background in publishing, so it’s not like I didn’t have any idea of what was required.  As a professional comic book editor, we had our own challenges – but we only had to get 22 pages out a month – times about a dozen books.  But when there is a team involved, you can rely on your team when you have a down day.  Not so for a site like this.  If I don’t do my job, nothing gets posted.

Needless to say, the first six months have been a ton of work, but more importantly, a ton of fun.  I’ve felt privileged to share my passion for this material, and I can’t wait to see how the next six months shape up.

With that in mind, let me get to the real topic of today’s post – a new Big League Chew-related discovery.  And this one has a bit of a round-about nature to it.

It was near-impossible to find any information on Big League Plug, but I finally did track down a sell-sheet for the product, from a Wrigley internal file. 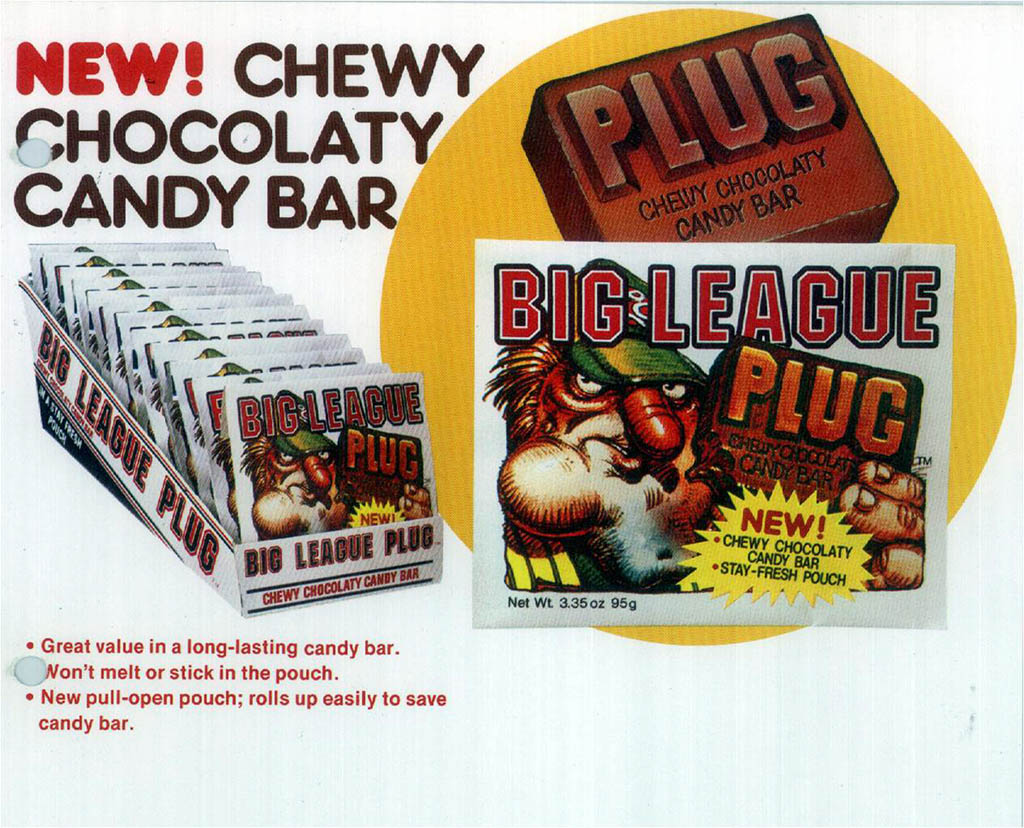 That graphic was all that I had to show in that original Retrospective.

Later, I’d find an actual vintage example of a Big League Plug package, within the wondrous L.M. Kallok Collection.  I wrote about that find two months ago in a piece entitled Big League Plug – The Mythical, Chocolatey Cousin of Big League Chew!

Within that piece, I postulated that the image from the promotional sell-sheet reflected a pre-production look for the packaging, because the example from the Kallok Collection was quite different: 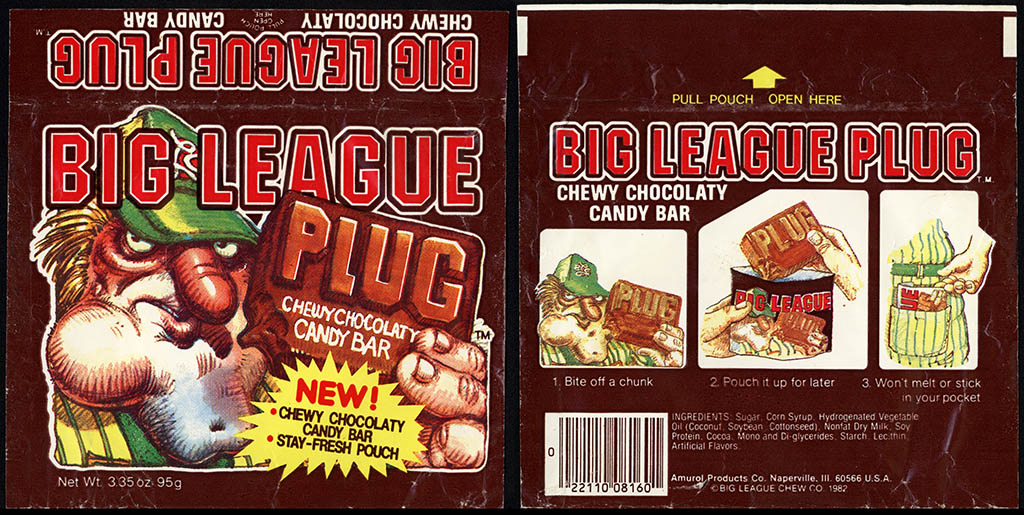 At that point, I thought I had really figured out this oddball Big League release.  But, as I am continually reminded, candy is never so simple to figure out.

A few weeks ago I was contacted by a gentleman who claimed to have an unopened pack of Big League Plug.  Though I had the Kallok Collection example, I was still intrigued to see a full pack.  I awaited an e-mail with photos and when I saw them, I was blown away.  It was a full pack of Big League Plug, but unlike the brown-background example I had found earlier, this one matched that original sell sheet.  Not only that, it still had its original Target price tag on the pack (59-cents):

Seeing both, I now assume that the white pack came first, and the brown one followed sometime later.

Why the change?  My guess is that a few folks were confused by the white packaging, mistakenly assuming they were getting gum inside, instead of a candy bar.  Amurol then addressed that confusion by changing the look of the packaging to highlight the chocolatey contents – the brown pack.    At least that’s my current working theory.  Until the next surprise comes along…

So ends the latest chapter of the Big League Plug story.

Oh, and hooray!  We made it six months!!

A New York City based writer, editor and sometimes actor. After spending much of the 1990′s in the comic book business helping tell the stories of Marvel Comics’ X-Men as series editor, he has since split his time between developing his own entertainment properties while still consulting and working on others. Having been described as “the Indiana Jones of lost and forgotten candy”, Jason is one of the country’s premier candy collectors and historians with his discoveries appearing in countless blogs, magazines, newspaper articles, and books. Always happy to share his knowledge and unique perspectives on this colorful part of our popular culture, Jason has consulted with New York’s Museum of Food and Drink and has also been a featured guest on Food Network’s Heavyweights, France’s M6 Capital, and New York’s TheActionRoom.com. My Google Profile+
View all posts by Jason Liebig →
This entry was posted in 1980's, Chocolate and tagged 1980's candy, 80's candy, Amurol, Big League Chew, candy collecting, candy collection, candy collector, candy wrapper collection, candy wrapper collector, collectible, collecting candy, confectionery, confections, packaging, sweets, vintage candy wrapper, wrapper, Wrigley. Bookmark the permalink.

4 Responses to A Big League Pair and Six Months of CollectingCandy!