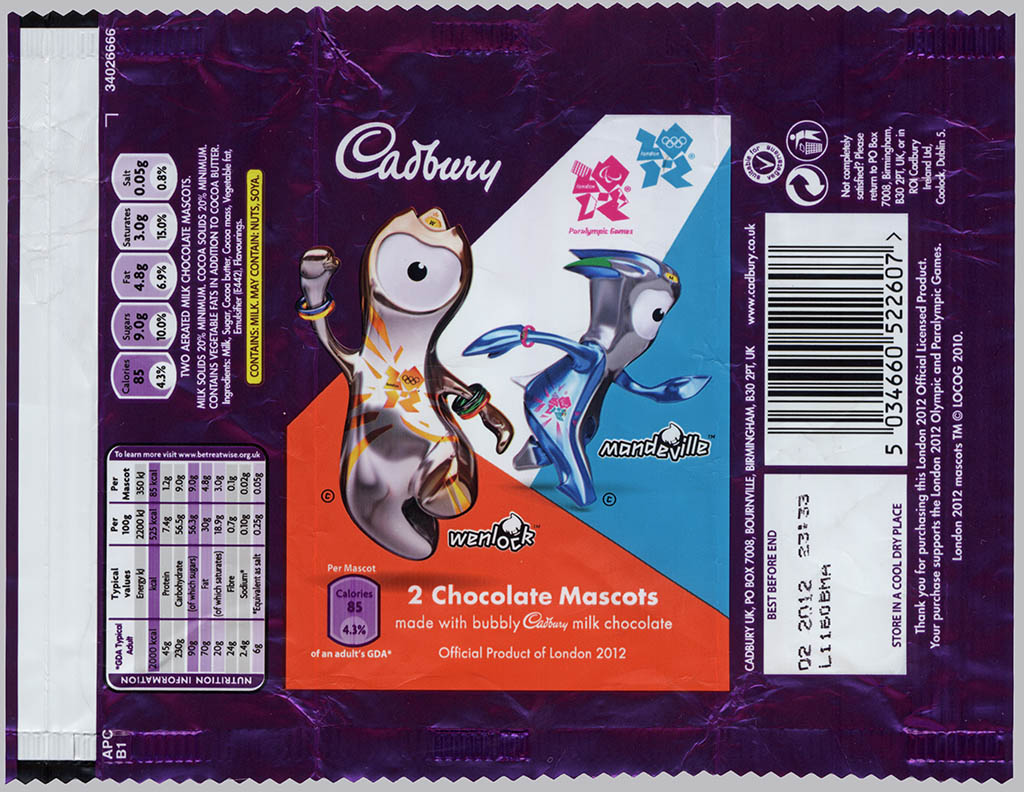 The 2012 London Summer Olympics officially kicked-off today after a wonderful opening ceremonies yesterday.  I had a great time watching the ceremonies on television, and realized it was the perfect time to devote a post here to these Olympics.

The title image for today’s post is my favorite of those I’ll be covering – it’s Cadbury’s Olympic mascot bar, featuring Wenlock and Mandeville.  The chocolate itself is shaped like the two strange-yet-appealing characters.

Cadbury began branding the 2012 Olympic logo onto their packaging back in 2010.  They also created and launched an Olympic-related campaign called Spots V Stripes.  Spots V Stripes was a £50m campaign that Cadbury ran from 2010 through today.  There were a number of initiatives launched within the campaign and its efforts were spread across TV advertising, digital, events, community programs, PR and outdoor advertising.

I have two wrappers from bars that were created out of the Spots V Stripes campaign – and here they are: 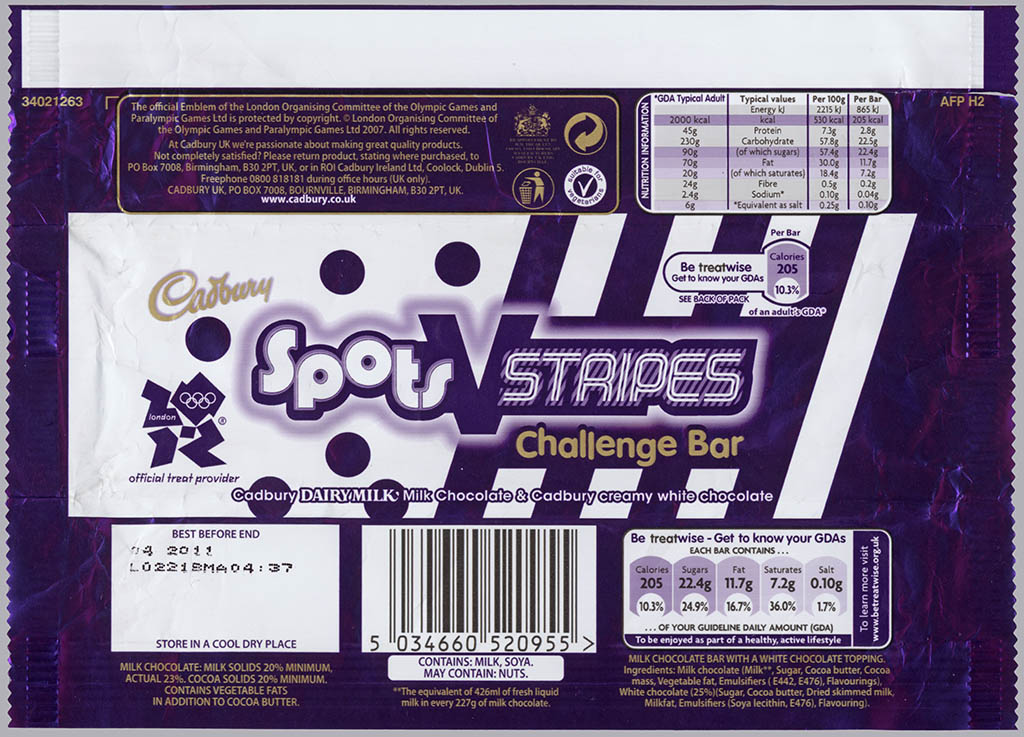 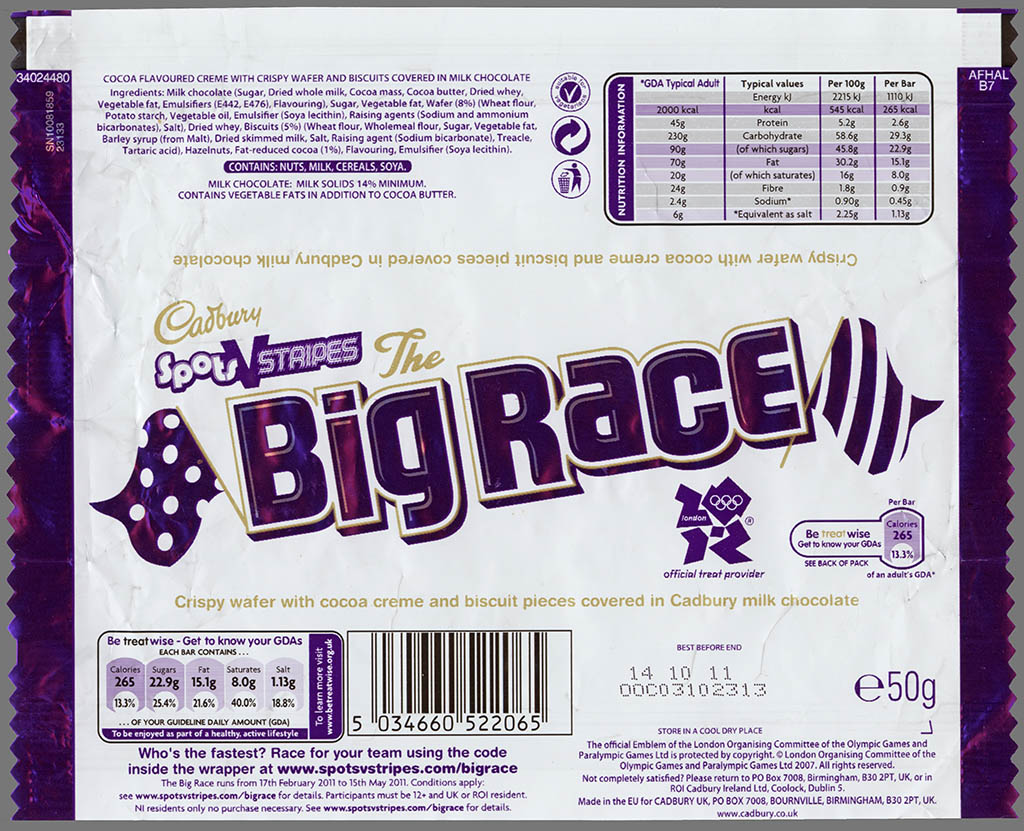 Beyond the bars that were created specifically for the 2012 London Olympics, they also branded standard bars with the logos and info.  I wanted to pick up as many of these as I could.  Here are a couple of them: 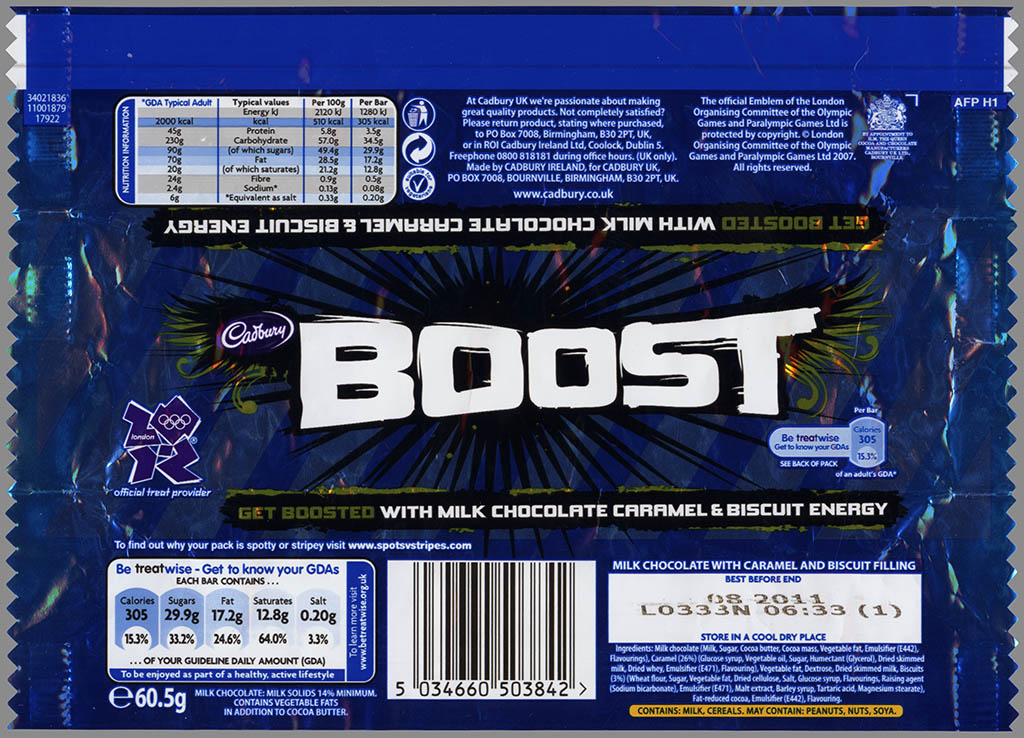 I like that the Boost bar touts “biscuit energy”, which I think translates loosely to me as cookie-energy.  Awesome.

And finally, here’s my favorite Cadbury brand bar, with Olympic branding of its own:

The Olympics are an amazing time for the world, but also a special time and special event for the host country.   As a collector, it’s great to track down and see the limited edition packaging that’s released to celebrate hosting the Olympics.   It’s fun stuff.

And that’s all for today’s 2012 London Olympics-themed post.  See you next time!

A New York City based writer, editor and sometimes actor. After spending much of the 1990′s in the comic book business helping tell the stories of Marvel Comics’ X-Men as series editor, he has since split his time between developing his own entertainment properties while still consulting and working on others. Having been described as “the Indiana Jones of lost and forgotten candy”, Jason is one of the country’s premier candy collectors and historians with his discoveries appearing in countless blogs, magazines, newspaper articles, and books. Always happy to share his knowledge and unique perspectives on this colorful part of our popular culture, Jason has consulted with New York’s Museum of Food and Drink and has also been a featured guest on Food Network’s Heavyweights, France’s M6 Capital, and New York’s TheActionRoom.com. My Google Profile+
View all posts by Jason Liebig →
This entry was posted in British and tagged 2012 London Olympics, Cadbury Olympics, candy collecting, candy collection, candy collector, candy wrapper collection, candy wrapper collector, collectible, collecting candy, confectionery, confections, Madeville candy, Olympic candy, Olympic chocolate, packaging, sweets, vintage candy wrapper, Wenlock candy, Wenlock chocolate bar, wrapper. Bookmark the permalink.